Those who know Torfi Birkir Jóhannsson describe him as the guy you want around when things go south. He welded a D-ring screw to a pintle hitch during an Arctic whiteout, acted as chief mechanic and logistics expert on various expeditions, and volunteers for the Slysavarnafélagið Landsbjörg, Iceland’s Search and Rescue team (ICE-SAR). He was part of Expeditions 7’s south-to-north vehicle traverse of the Greenland ice cap and attended rescue operations in Haiti in response to the devastating earthquake in 2010. Jóhannsson is, without a doubt, a modern-day Mr. Fixit. Does the title fit? “Yeah. Yeah. That’s me,” he grins.

It’s no surprise that Torfi’s 1990 Double Cab Toyota Hilux is a product of his talent as a mechanic and electrician. It all started with a 1991 two-door extra cab Hilux with original front suspension, a 2.8-liter engine, air springs in the rear, and a solid axle. With a mere 1,000 kilometers on the odometer, the truck burst into flames and was left to rust until Torfi caught wind of it from the owner of a local bus company. He threw away the cabin, removed the engine, gearboxes, transfer case, cut the front suspension (replacing it with a Land Cruiser 80 system), rebuilt the rear suspension, and installed a solid axle with an air spring. 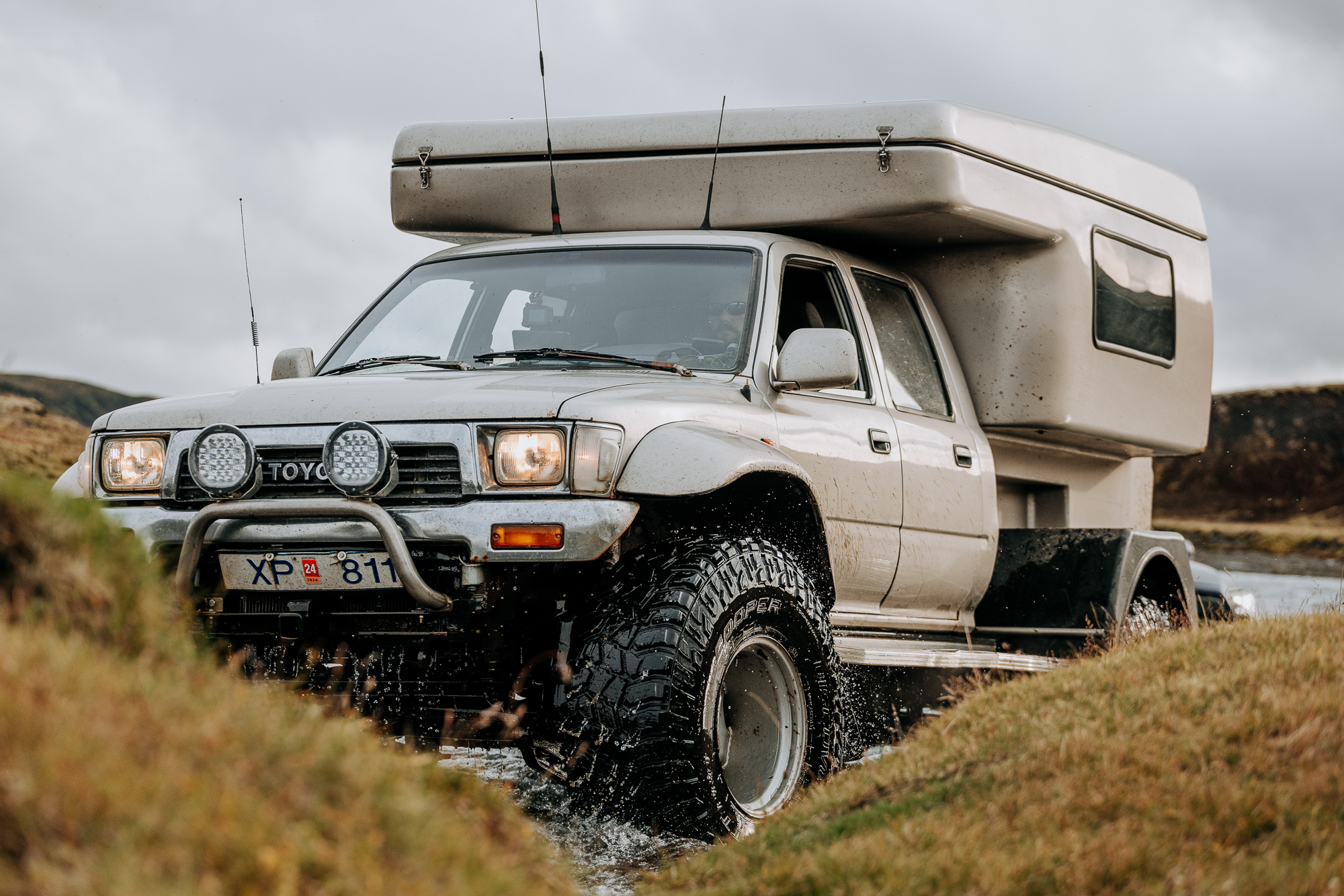 Another Hilux, a 1990, came into the picture soon after. Purchased solely for the rust-free cab, the truck had driven only 300 kilometers, spending carefree days on a farm in Northern Iceland. After swapping the cab onto the 1991 frame, Jóhannsson installed a 1990 Prado 1KZ turbo-diesel engine and intercooler, which just so happened to be sitting in his garage. “Eventually, a piston split in the 2.8-liter engine, and, at that point, I just swapped to the 3-liter,” he says. “Now I have the exact same engine ready if this one goes.” While the 3-liter Prado engine was more powerful, it also ate differentials for breakfast. “They didn’t last long,” Torfi recalls. “The next thing I did was find Land Cruiser 80-Series axles and installed them. No differential breaks since.”

Eventually, he added an Icelandic-made fiberglass pop-up camper, which, in its past life, was involved in a roll-over accident while driven by tourists. Jóhannsson bought the heavily damaged camper from an insurance company, fixing busted-up windows and an askew pop-top. A paint job added cohesiveness, although, Torfi’s heart was set on a champagne color. “A friend didn’t stir up the paint, so the gold flakes were all at the bottom,” he laughs. 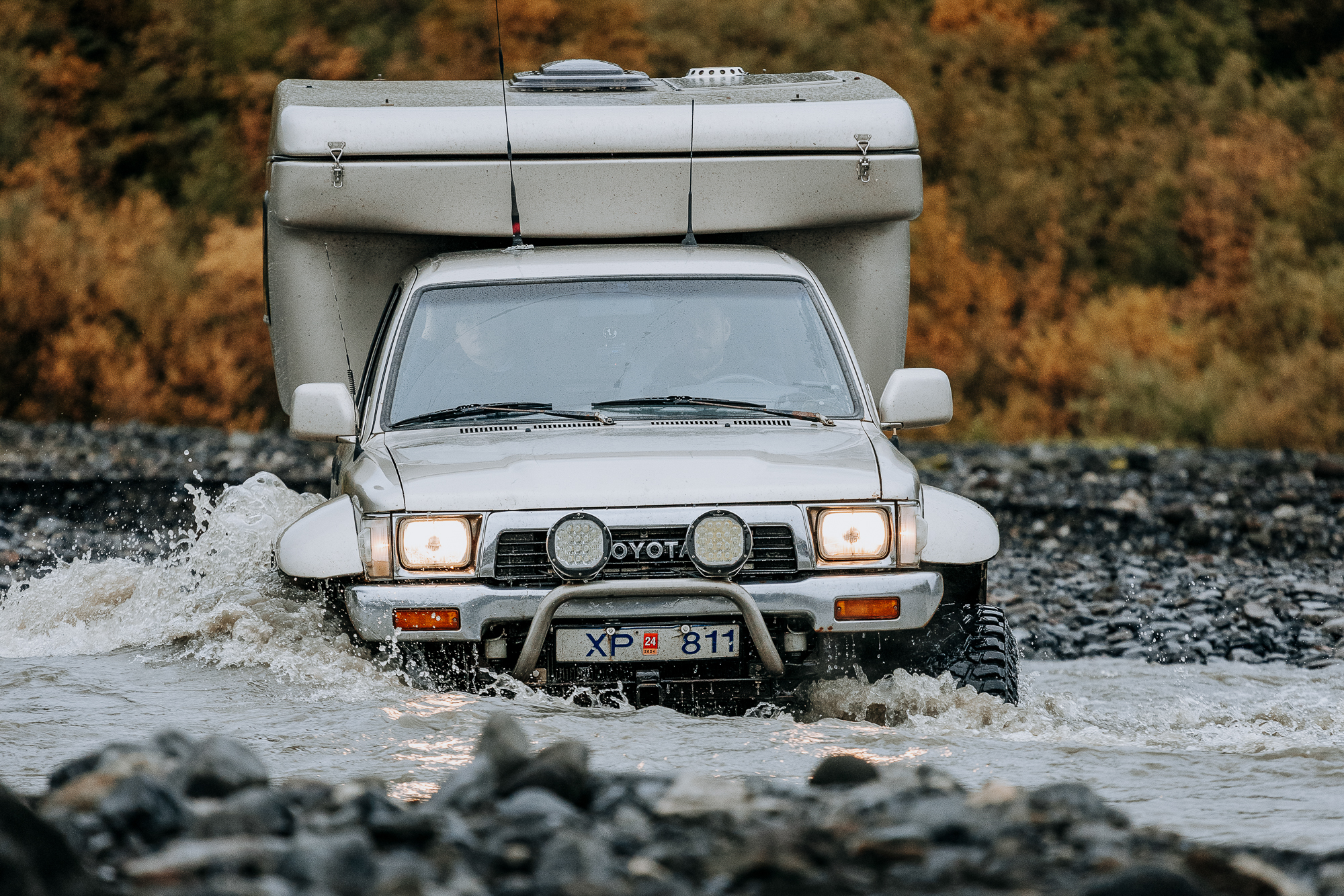 Jóhannsson’s interest in vehicles began at a young age. Growing up on a farm in rural southeast Iceland, with limited resources, instilled the importance of repair skills, including everything from vehicles to appliances. “At age 10 or 11, I started to travel with my friend’s family in Jeeps, off-roading on snow and glaciers. After that, there’s no way back,” he says. Being in nature, away from the crowds of the city, with a good group of people really spoke to him. Next was travel by bicycle, motorcycle, and, eventually, trucks. “My first vehicle, a 1981 Jeep, was rusty, half-rolled over, and needed a lot of work. I’m lucky—my father and others had facilities I was able to use. That’s a big part of everything.” After finishing high school, he spent a year repairing cars in a workshop; but that was just part of the puzzle. “I said to myself, I can fix my car—that’s easy—but I don’t know how to fix my television or VCR.” He finished an electric technician course which also lent itself well to understanding vehicle electronics.

In Iceland, leaving pre-determined dirt tracks while driving is illegal. But when the snow begins to fall, nearly anything is possible. Icelandic vehicles are built for a specific purpose—driving on and crossing the colossal collection of glaciers covering approximately 11 percent of the country. While four-wheel-drive trucks in Iceland lack most of the aftermarket accessories that have become so popular in North America, their style is attractively simple and effective. Torfi’s Hilux features many elements typical of Icelandic off-road vehicles, including modified fender flares and gargantuan-sized tires. Icelanders traveling on snow and ice typically choose tires anywhere from 37- to 46-inch, running them as low as 2 psi to maximize flotation and traction. Large tires help with clearance during river crossings, a commonplace occurrence in Iceland’s backcountry. 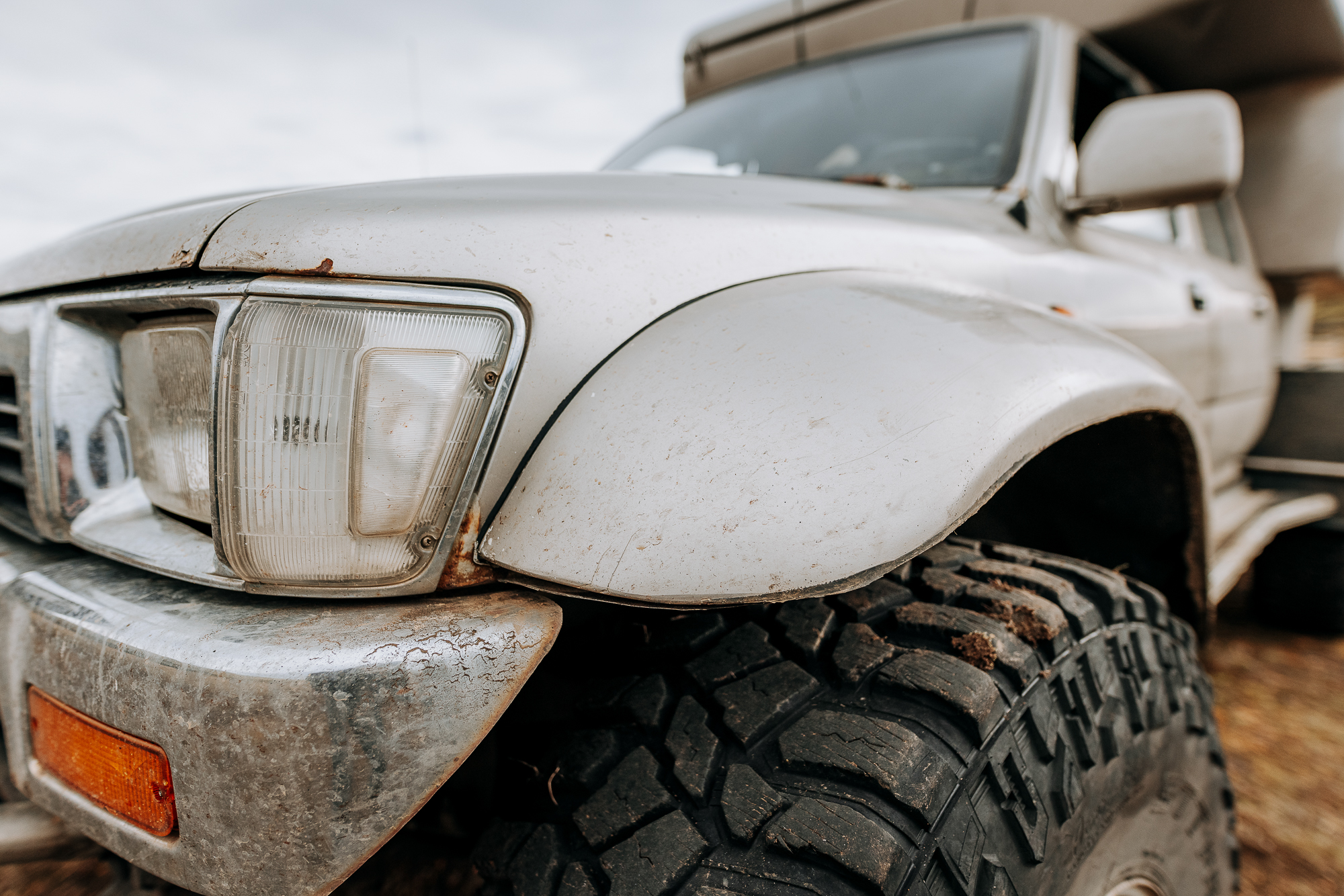 Jóhannsson rotates five (yes, you read that correctly) sets of tires depending on the conditions or project. Thirty-seven-inch Toyo Open Country tires, 38-inch Arctic Truck 405 tires, 44-inch Dick Cepek tires, 44-inch Arctic Trucks Nokian tires, and a set of Mickey Thompson Baja Claw 46-inch tires round out his collection. “I use the 46-inch tires for heavy snow or rocky terrain. They’re strong,” he explains. “In the summer, the truck is on 40-inch tires. They are good for mountain roads and the highway.” A second transfer case helps promote tire movement and controls wheel speed on snow. Torfi says he prefers steel rims over aluminum, as he’s witnessed aluminum wheels break after hitting rocks at low tire pressures. 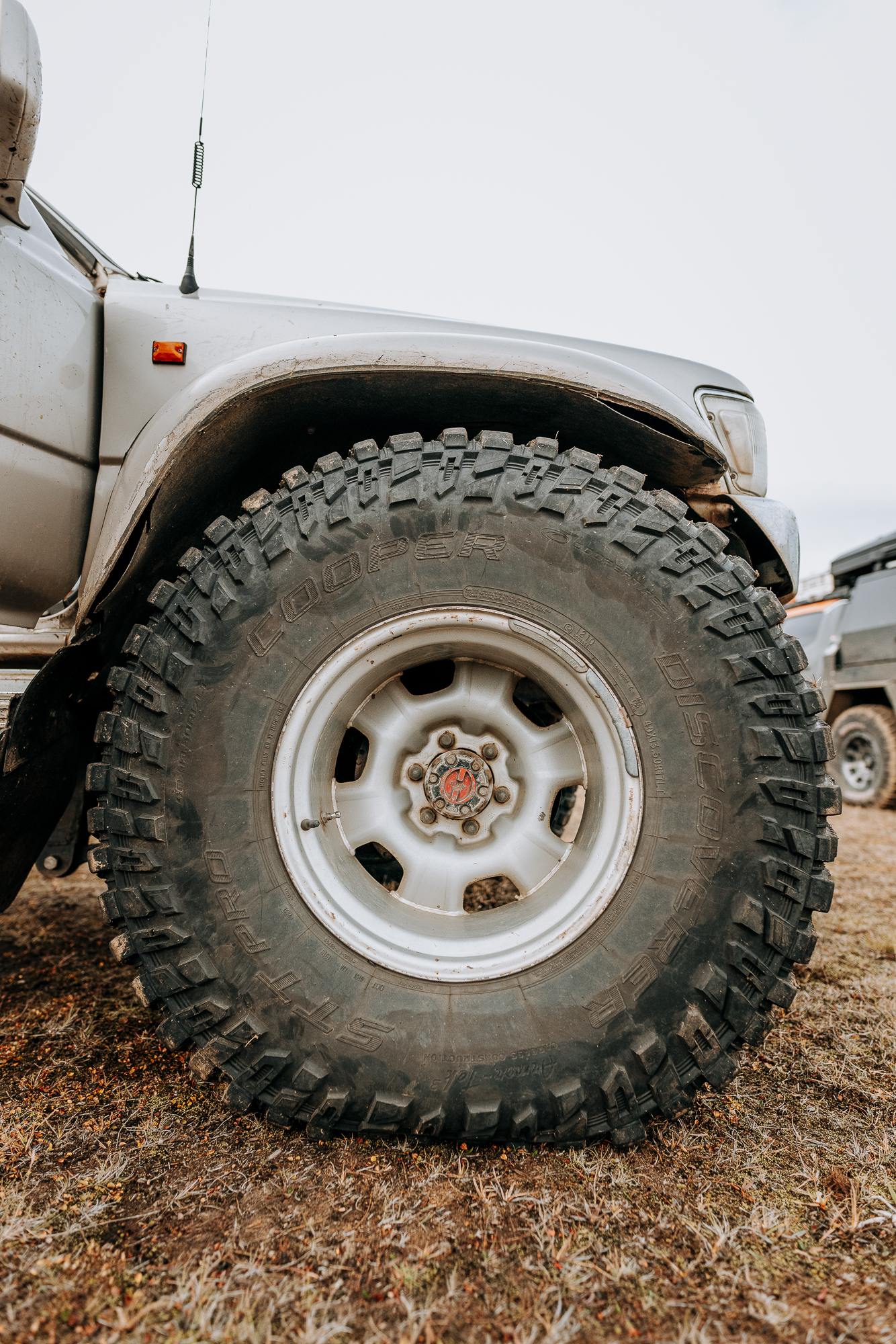 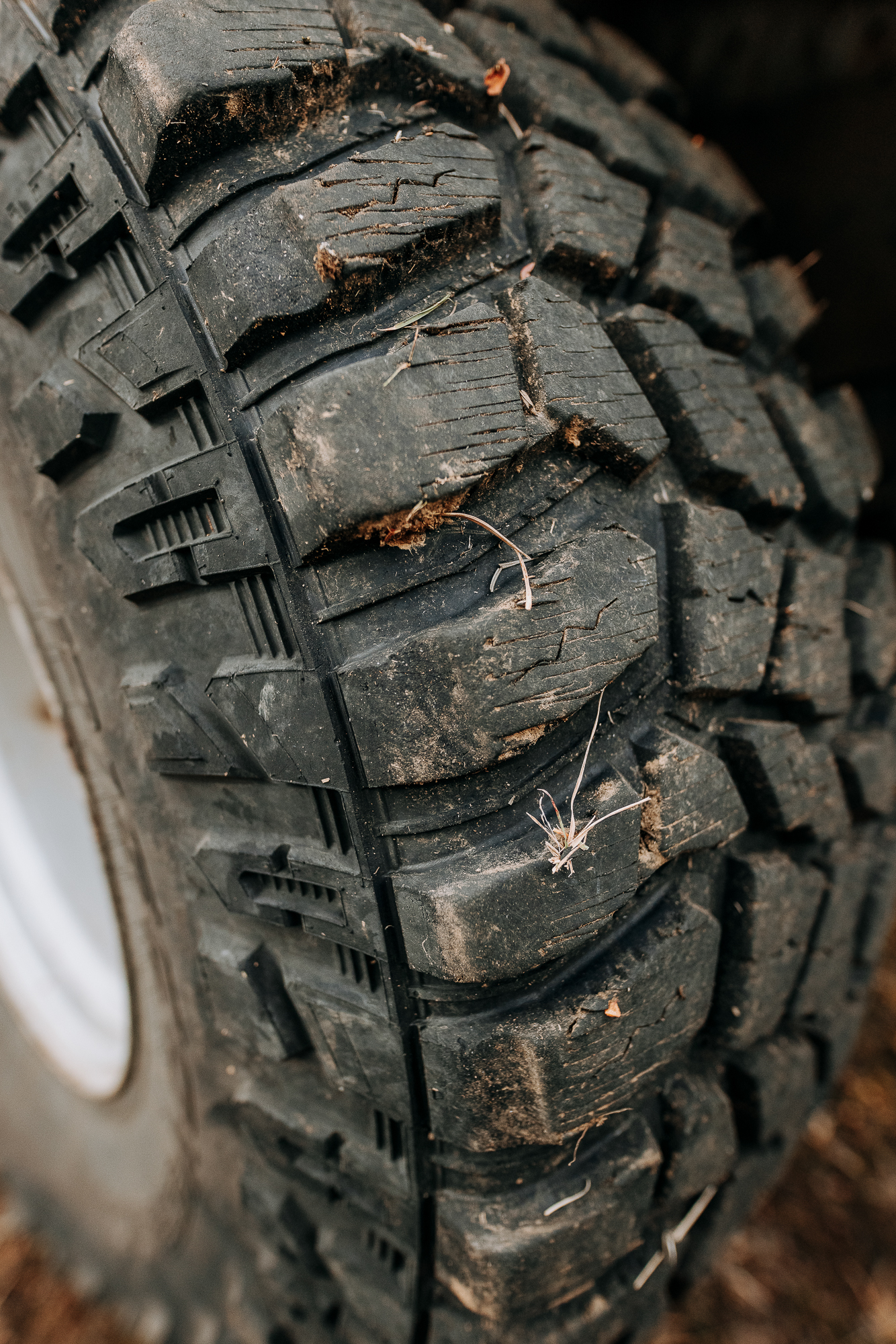 Rather than toting along a fancy air-down tool or aftermarket valve stems, Torfi sped up the process of managing tire pressure with a second coreless valve installed in each wheel. When the caps are removed, air escapes through the second valve, resulting in a quicker air-down process. This isn’t necessarily a fitting solution for everyone, but it works well for Jóhannsson’s big tires and his tendency to air down often and run at a low tire pressure. He says leaks haven’t been a problem due to the rubber valve seals. To air up, he uses a York compressor.

To control the Hilux’s height, Torfi added Firestone Airide suspension, which has proved effective for tire clearance, leveling at camp, and removing and installing the camper. It also looks amazing while driving through roundabouts, like a ship sharply listing in the sea. Keeping the Hilux low is also a plus. “It’s awesome,” he says. “I can deflate the airbags, leave the camper, and drive away.” The camper remains tucked in his garage (neighboring the 1981 Jeep) for most of the winter, replaced by a topper and simple bed to minimize weight, lowering the center of gravity for better snow and side slope driving. 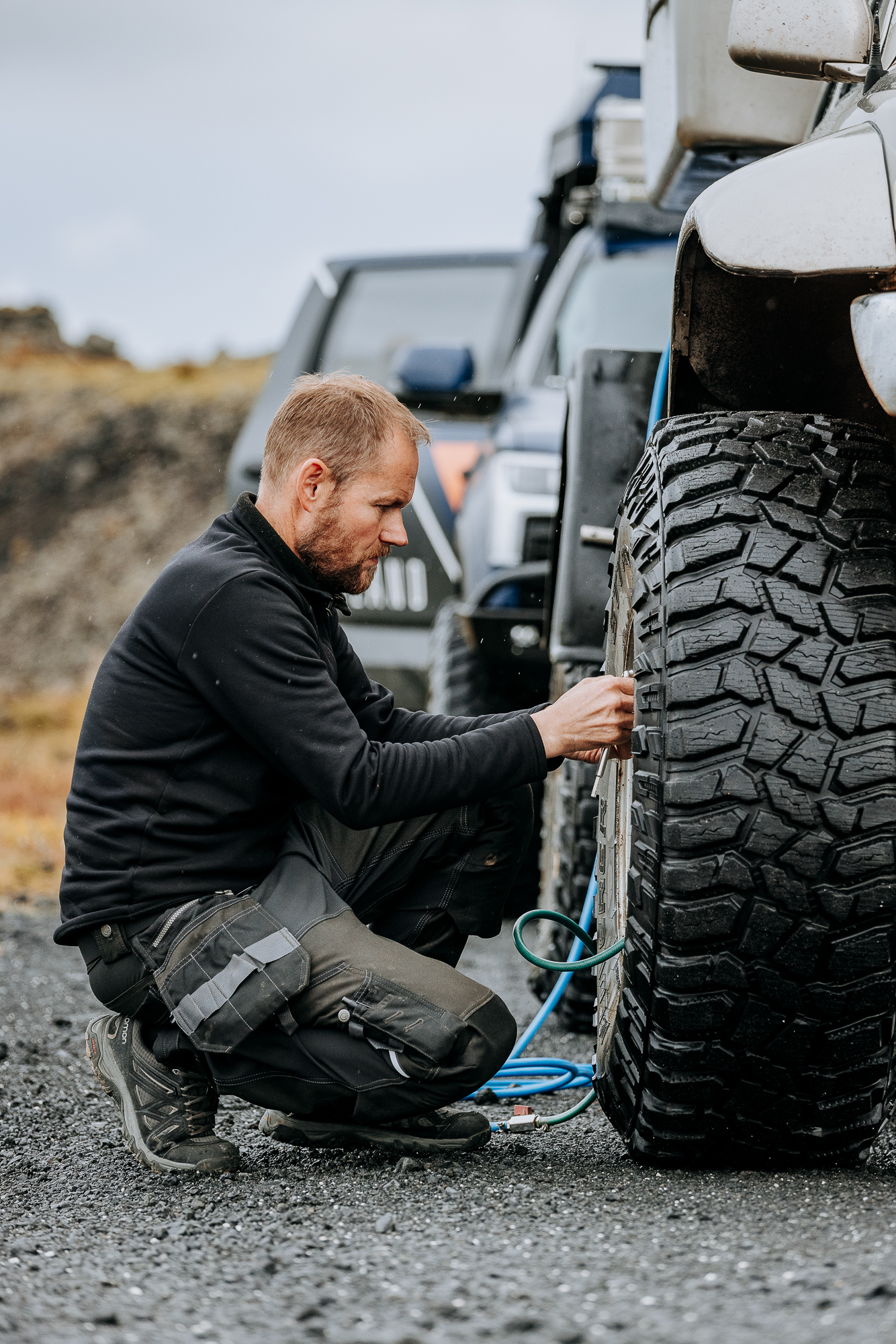 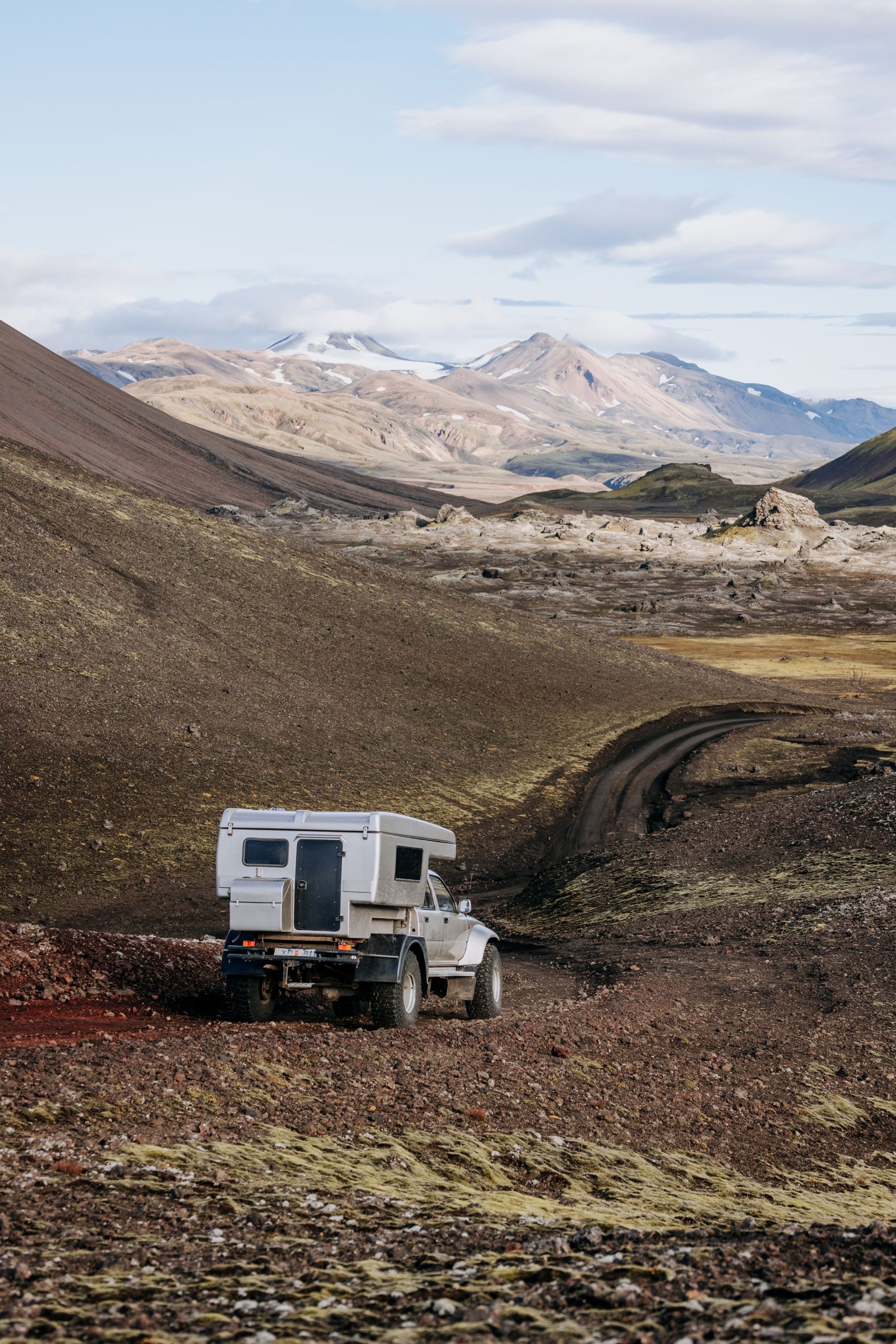 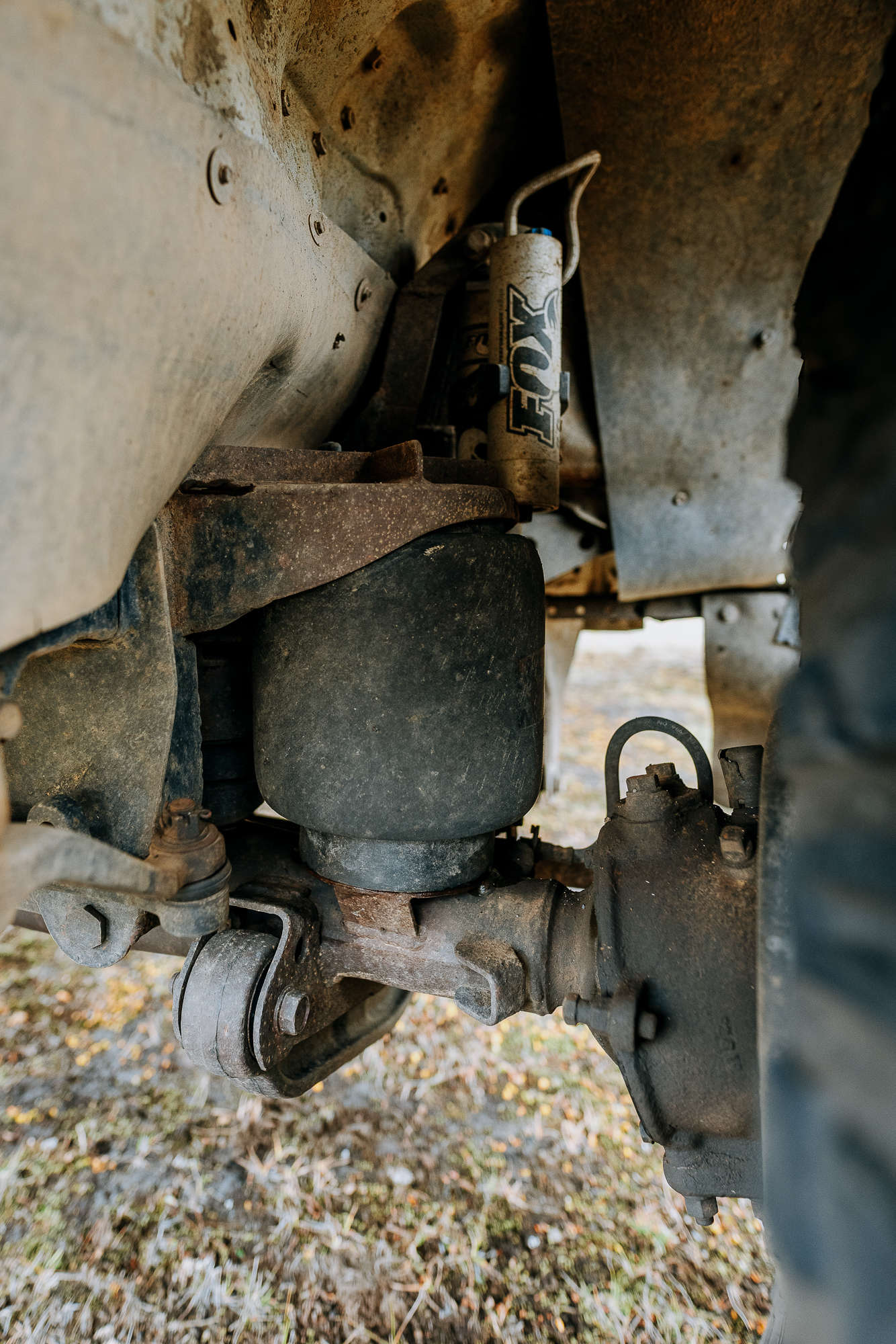 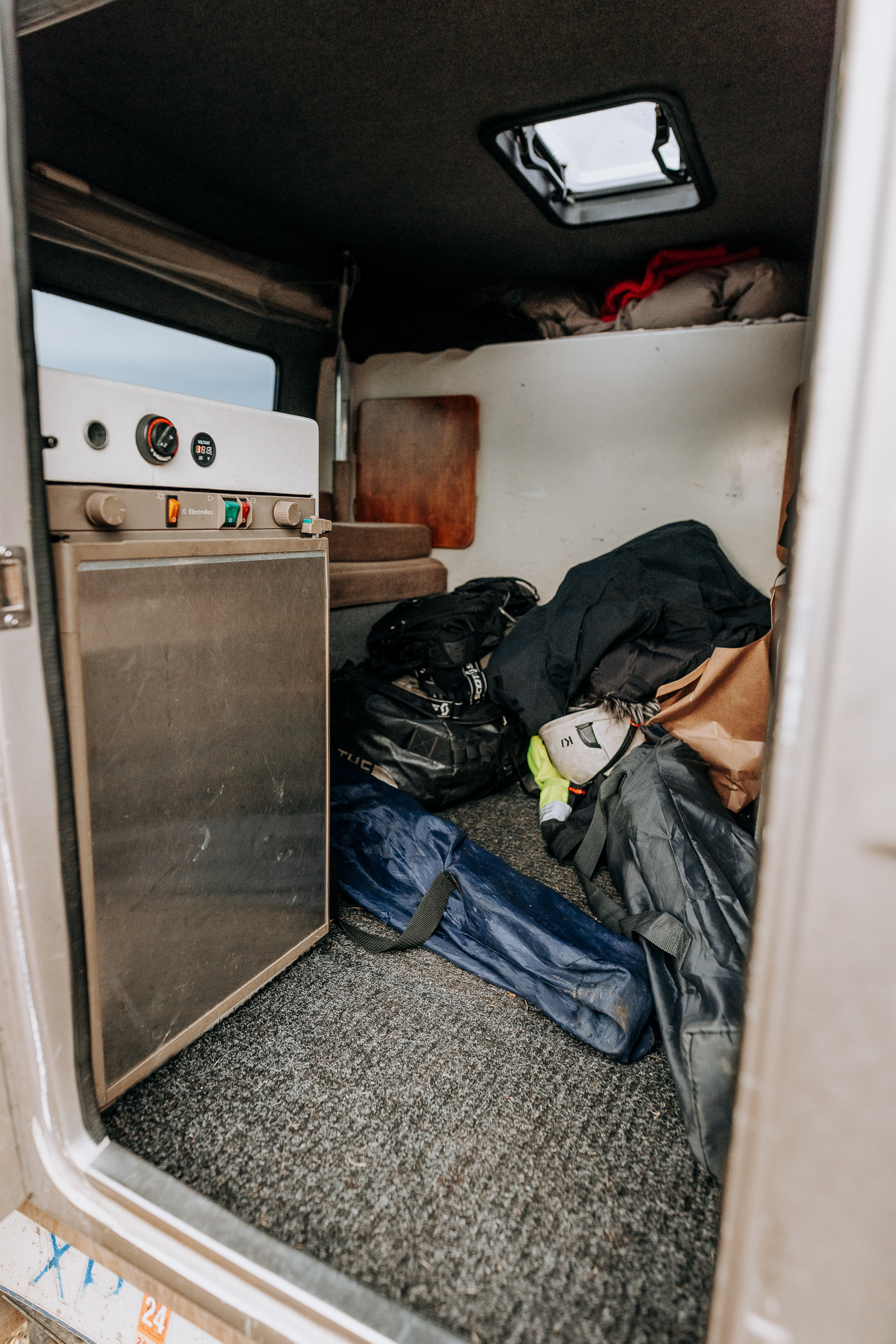 A French press filled with hot coffee, boxes of licorice-covered chocolates, spare tubing, an angle grinder, and a torque wrench stored under the driver’s seat were all sourced from the Hilux as we explored the F-roads in the Icelandic highlands. Whether our group needed a morale booster or a random tool for the job, items materialized as quickly as the trolls of Icelandic folklore fleeing daylight before turning to stone. Despite this, Torfi admits if he could make any changes to his Hilux, he wouldn’t turn down more space. “More power, of course, also,” he says. “More space usually means more stuff and more weight, though. At that point, it is not as capable of driving in snow. I think I’ll keep it like it is until it starts to rust badly.”

This truck took to the streets in 2004, so many memorable trips come to Torfi’s mind. “It’s all related to the people you’re with,” he says. Springtime also marks a special time of year for Icelandic off-roaders, when the days are lengthening, and temperatures are warming. Torfi paints an envying image of camping, sleeping in tents, and enjoying barbeques with friends atop thick layers of glacial ice. January marks the beginning of the off-road season in Iceland, bringing unpredictable weather and difficult terrain. There’s a twinkle in his eye as he describes the experience. “It’s always an adventure. You remember all the problems—how much you have to weld, how many axles you have to replace—but when everything goes smoothly, nobody remembers.” 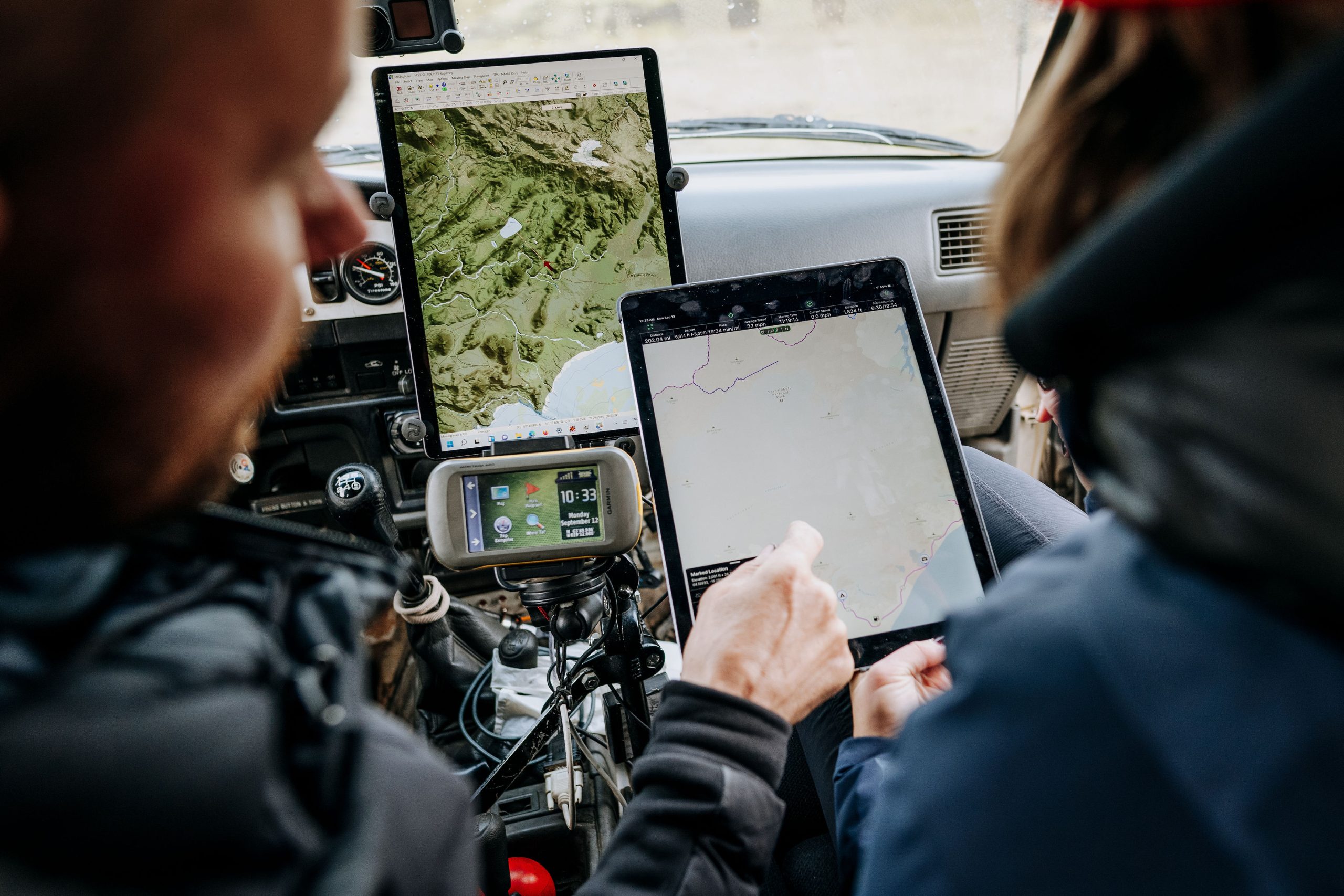 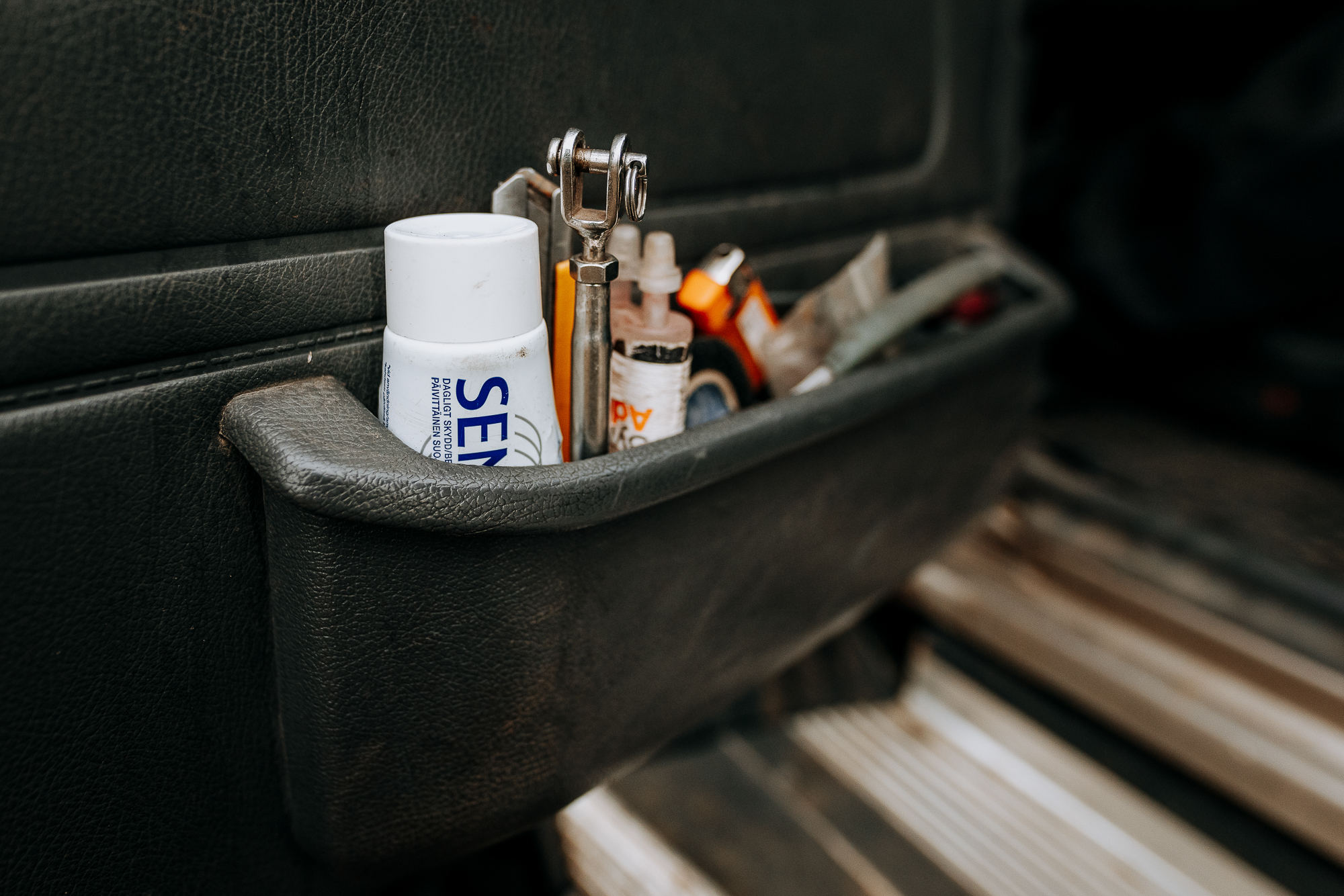 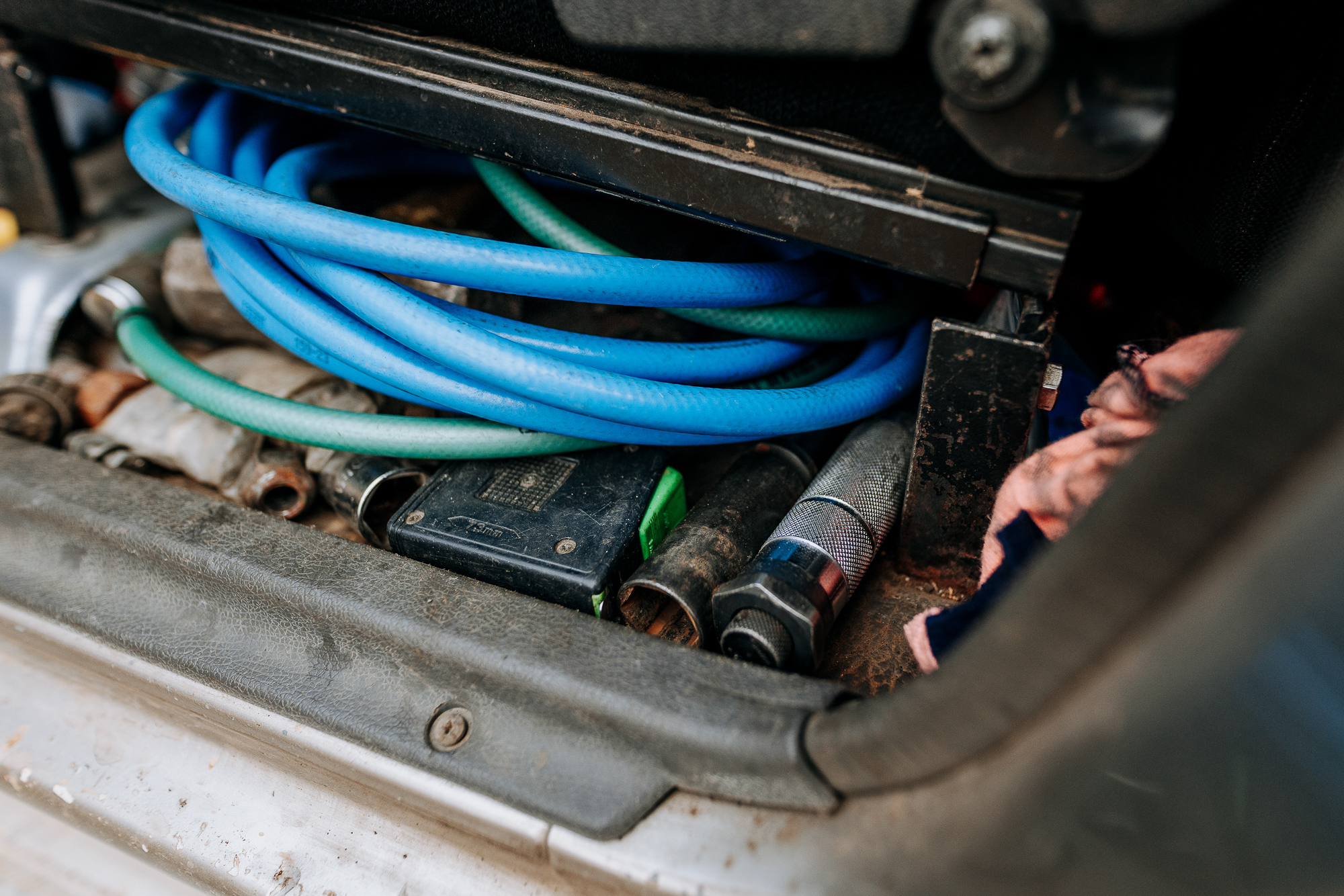 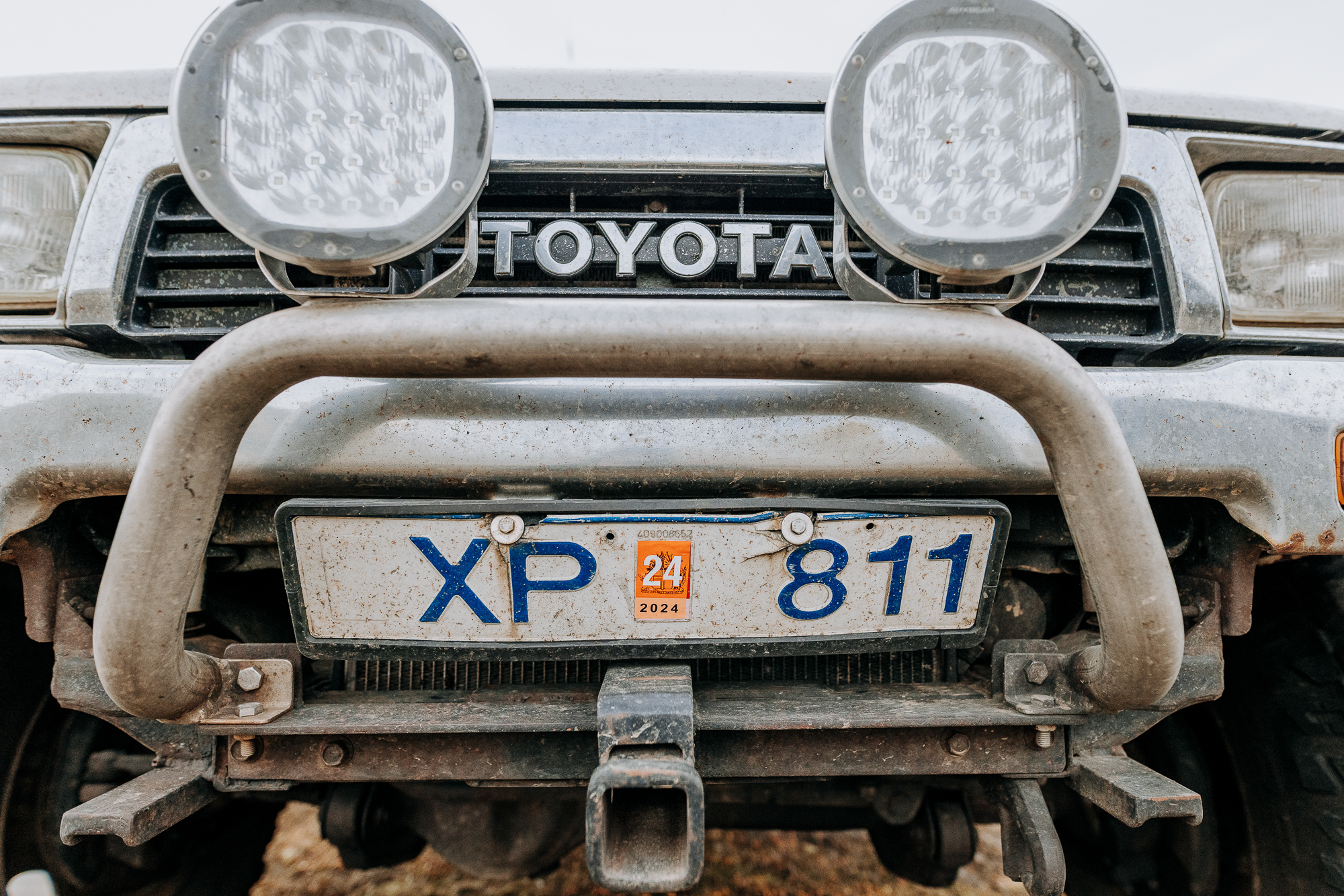 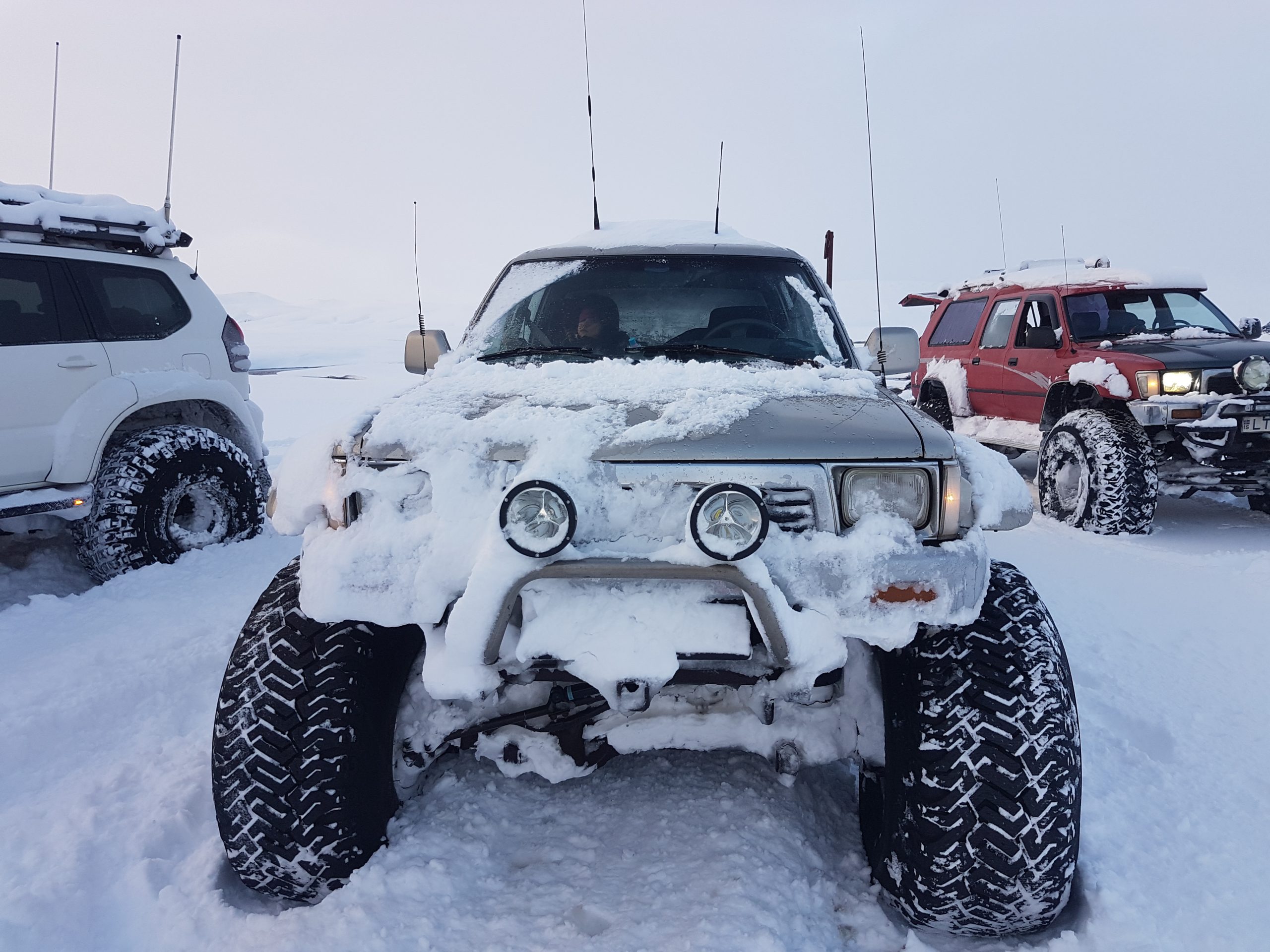 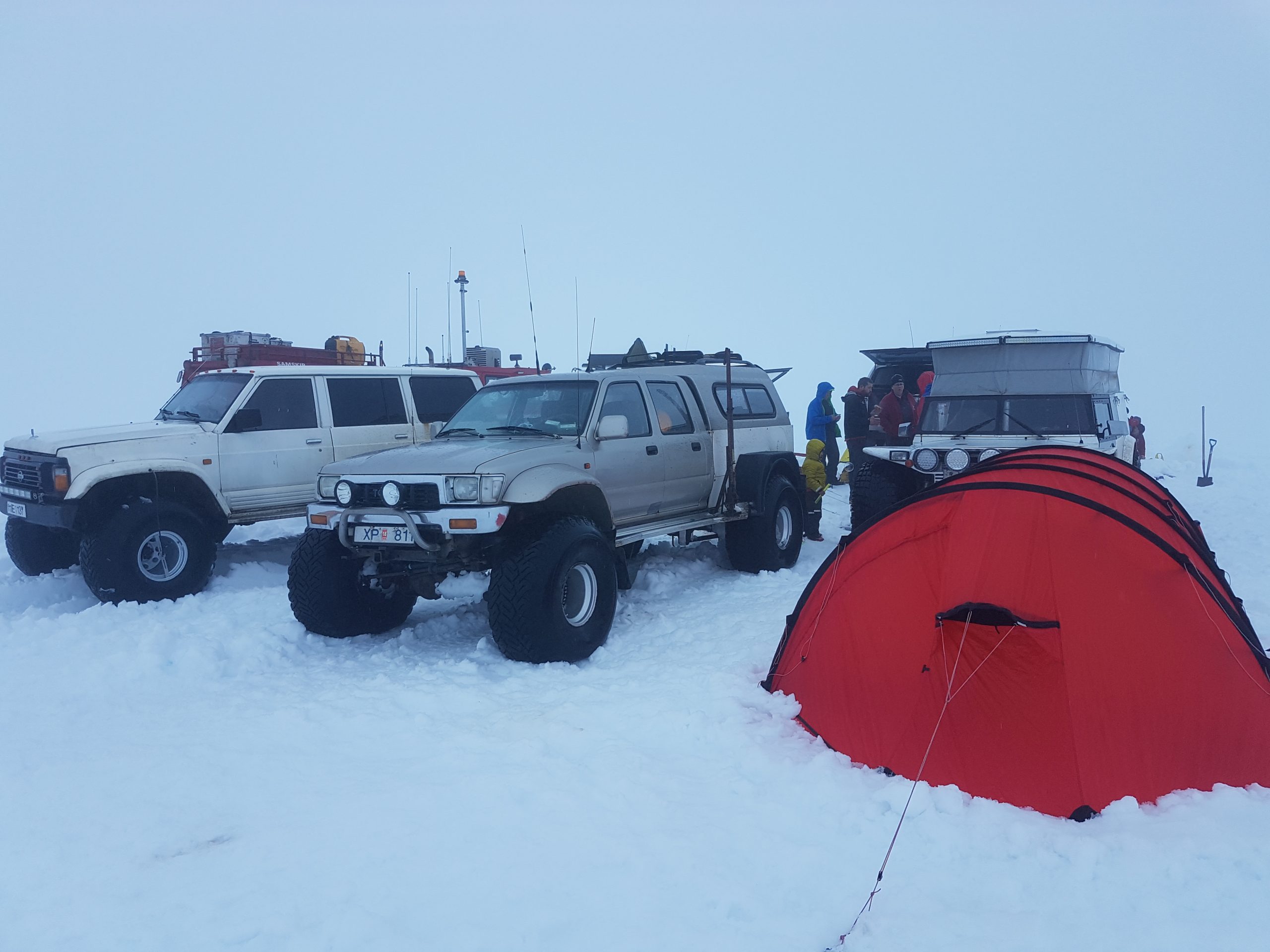 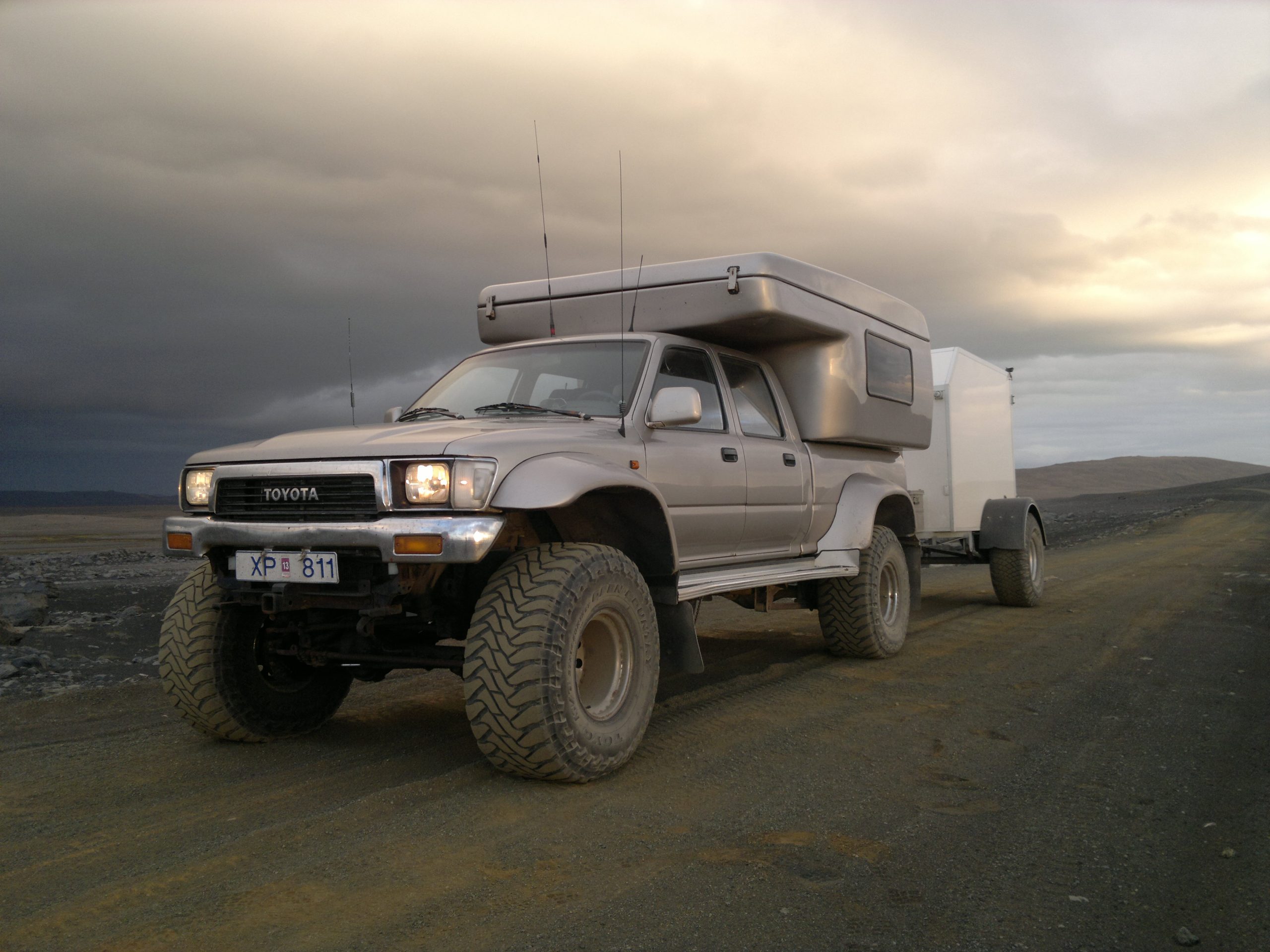 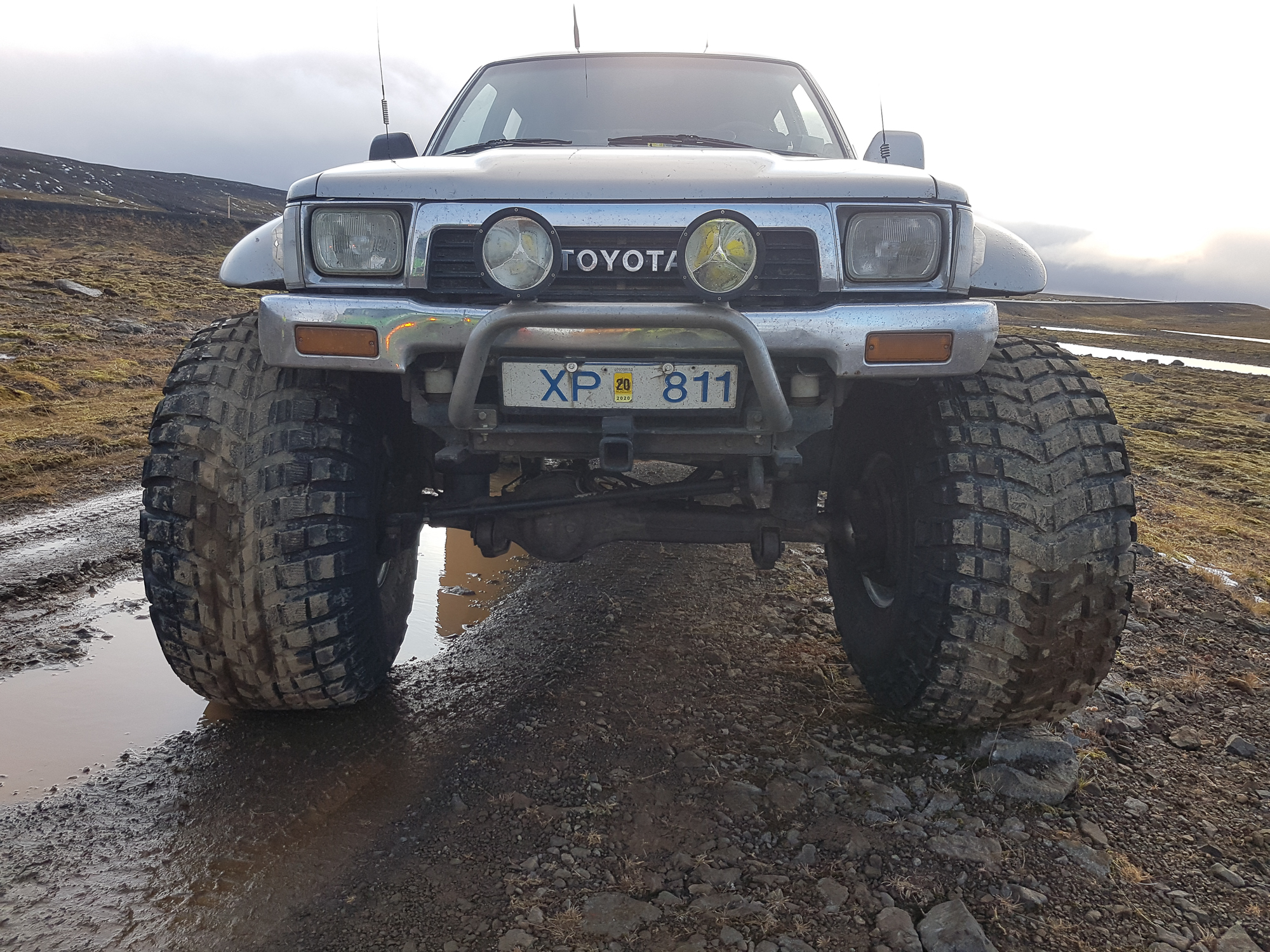 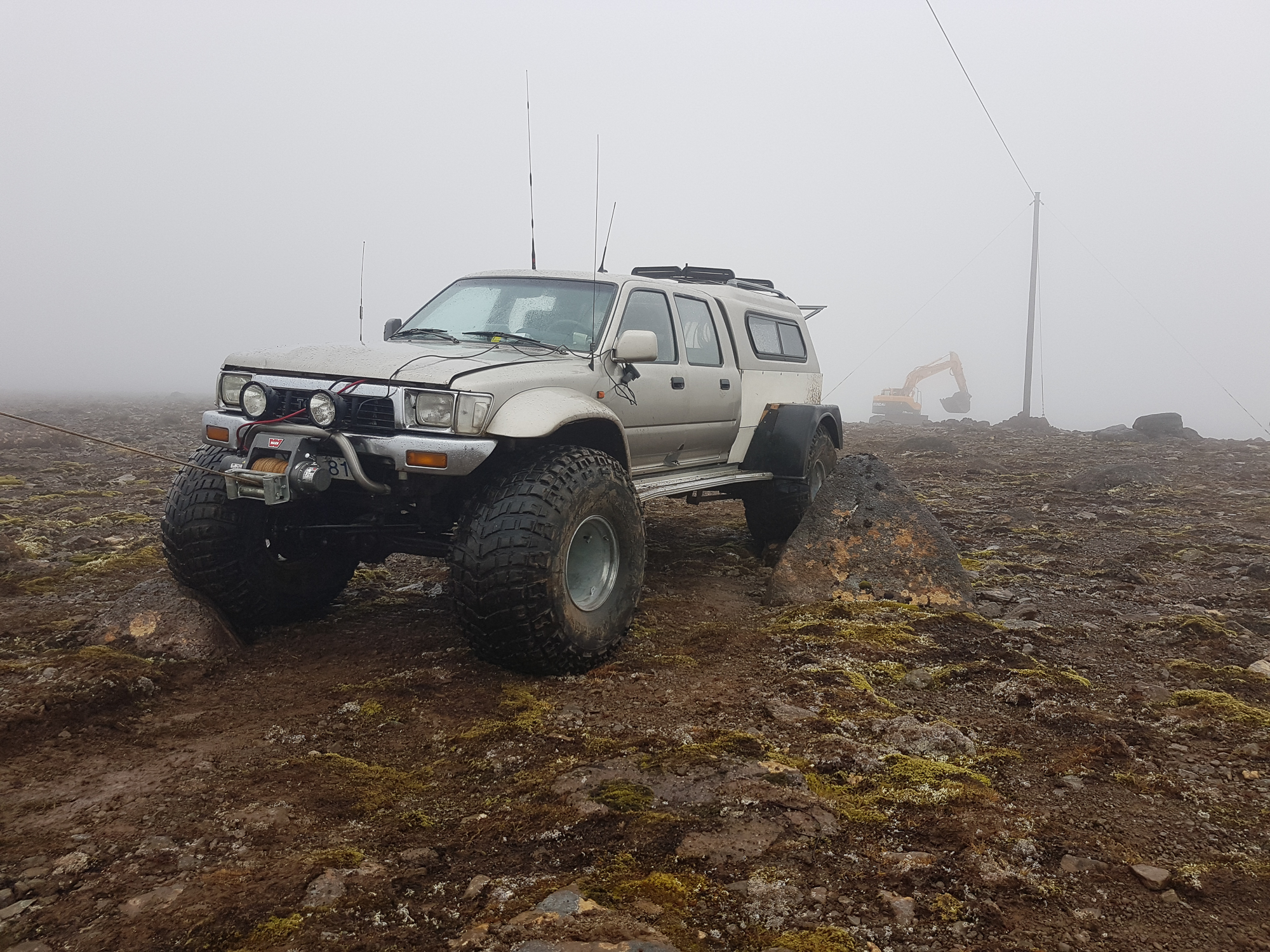