We all have two distinct choices in life–do nothing or do something. Many are content to binge-watch TV shows and doom scroll until their retina melt, while others get busy learning, designing, building, and creating. Randy Wimenta, the Marketing Activation Manager at KC Hilites, is a hands-on, gearhead kind of guy; he chose to get busy and make a dream come true by converting his daily driver, a 1989 Toyota Corolla GT-S, into a unique vehicle inspired by the viral Pandemic AE86 Bug Out vehicle rendering (please excuse the pun). 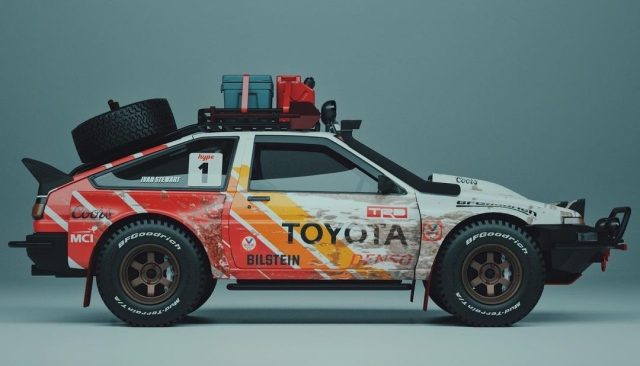 The beloved Corolla was the perfect base for a project vehicle, and Randy hatched a plan. The first step was to invite work colleague Alberto and cousin Will to get involved. As Randy planned for the Toyota to be a performance vehicle, not a mere show car, it would absolutely have to be all wheel drive (AWD). Alberto sourced an affordable 1989 Toyota Corolla All-Trac donor vehicle in Washington state, an offer was made, and the All-Trac was transported down to KC’s LA office. The wheels were in motion, and Randy dubbed the build “AWDROLA” (pronounced “odd-rolla”). 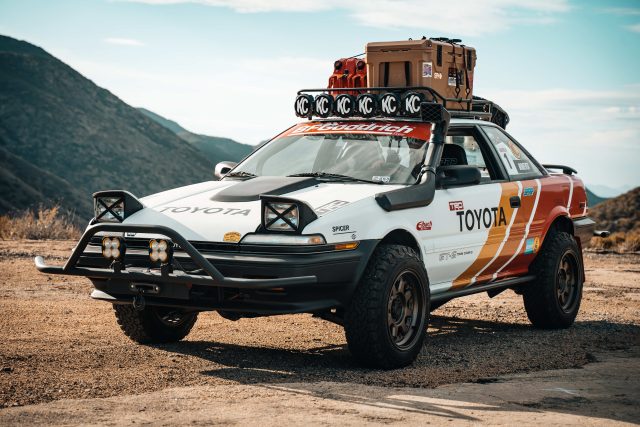 This Corolla AWD conversion is built on a foundation of 1980s Toyota technology, from the completely rebuilt 4AGE engine from the Corolla GT-S to the 4AFE transfer case and AWD axles taken from the All-Trac wagon. The motor had to be married to the transaxle (a single mechanical device that combines the functions of an automobile’s transmission, axle, and differential into one integrated assembly), which was achieved in part by sourcing a custom flywheel and clutch from F&S Clutch shop in California.

The next step was to assemble a custom suspension, and who better to enlist than the highly respected trophy truck builder and driver trainer, Chuck Dempsey? Chuck has raced the Baja 1000 32 times and has 45 years of experience as a competitive racer. It is fair to say he knows a thing or two about suspension setup’s. Chuck put together a system that can achieve up to eight inches of travel at the front and eleven inches of travel at the rear! No doubt the AWDROLA skims over corrugations and flies over humps as if they weren’t even there. Chuck was not the only expert on whom Randy and his team could lean for advice and expertise; he benefited greatly from the insight of Jon Rood, who is well known for his own off-road/rally 1980s Celica build. 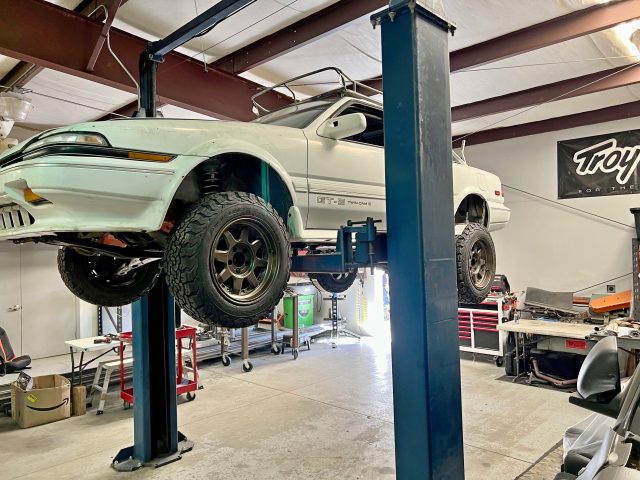 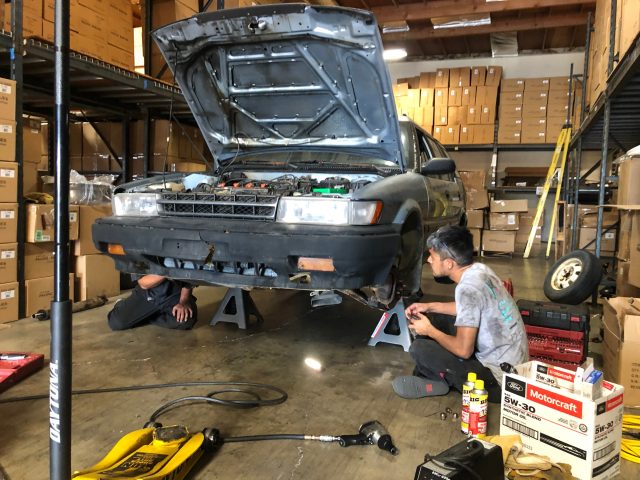 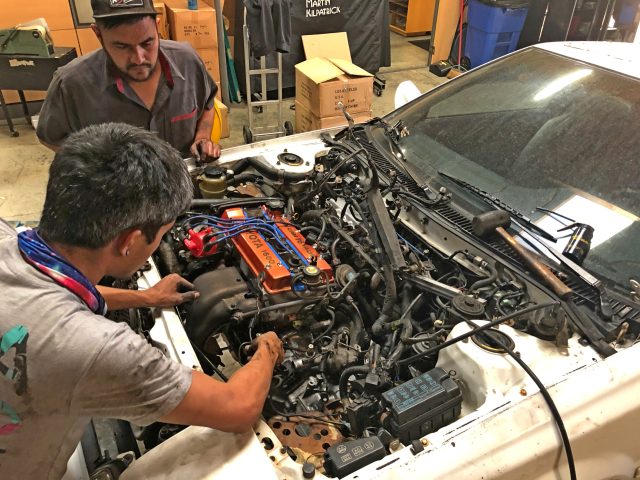 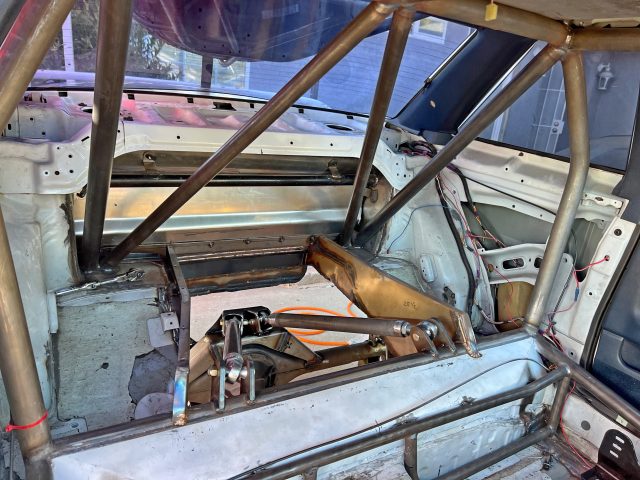 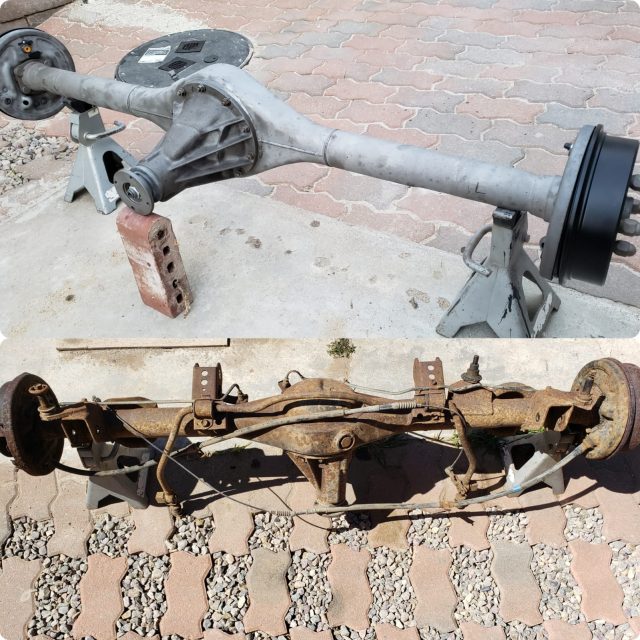 “It would’ve been a lot easier to start the build with a Toyota AE86 Sprinter Trueno. The AWD conversion would’ve been much faster, and the real-life build would’ve been 100% like the rendering. However, doing what we did with an AE92 and AE95 gave me more of an appreciation for Toyota engineering. [Did] you know that the All-Trac wagon front suspension system [can] bolt onto the 1999 RAV4?!” 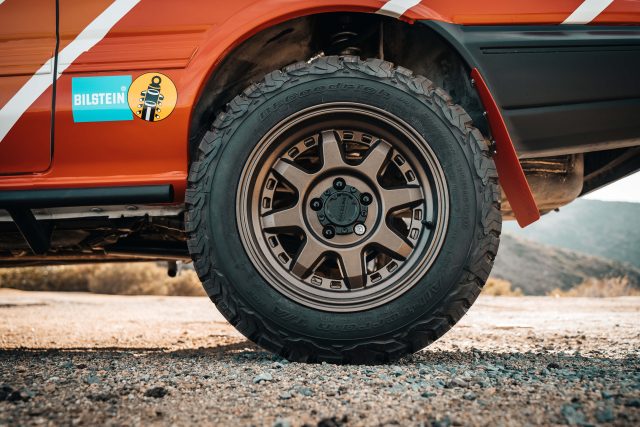 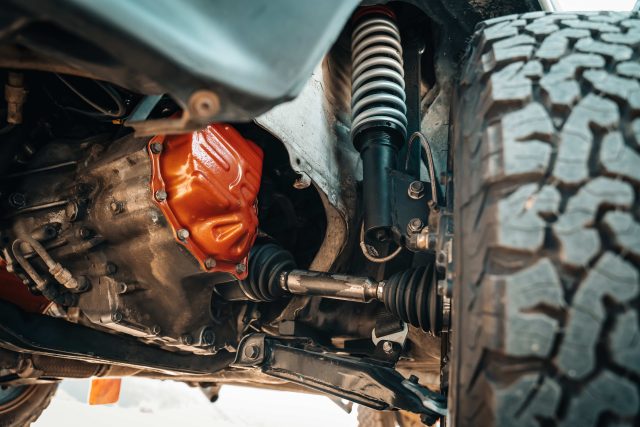 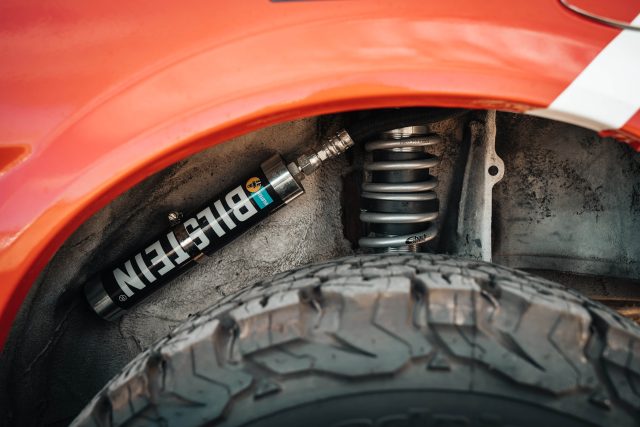 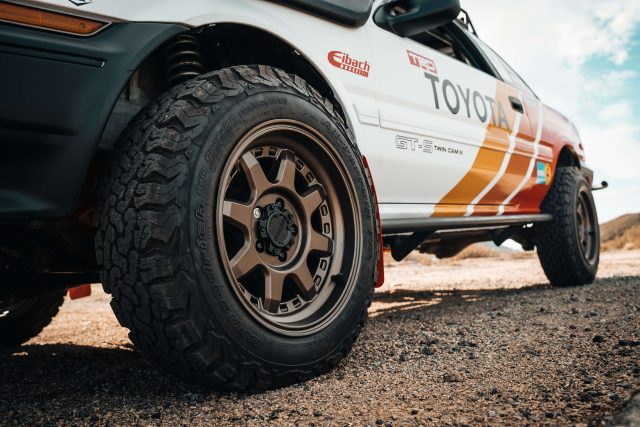 This universality allowed Randy to connect a Rav4 wheel hub assembly to the axle and suspension with minor customization. The All-Trac wagon rear axle four-lug wheel pattern was matched to the front axle five-lug pattern with the addition of wheel spacers. 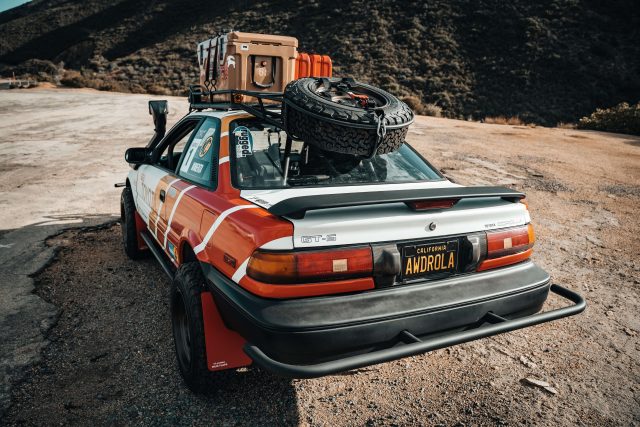 As the vehicle is built for off-road rally and travel, the team fabricated an internal roll cage that is welded to the subframe and to the roof rack, which provides safety for occupants while supporting the rear axle and the four-link suspension. The KC Lights-adorned roof rack houses a full-size spare wheel and naturally has space for extra fuel cans and maybe even some camping gear. A sixteen-gallon fuel cell takes up most of the trunk, while PRP seats and harnesses complete the stripped interior.

The team found that their goal of completing the vehicle within one month was not attainable due to the pandemic and resulting global supply chain issues. One month became four, then six, and only after a full year of welding, wrenching, and waiting for parts was the AWDROLA ready, only two days before the shake-down trip for the Gambler 500 rally! As is typical with these types of projects, budgets and time allocations are often optimistic. 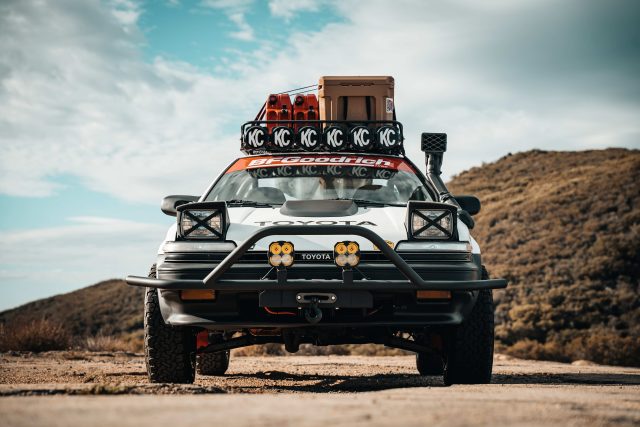 When asked about his plans for AWDROLA, Randy suggests that he hopes to drive the cool retro Toyota as much as possible, run a few trails with Jon Rood and his Celica, and tour with KC in 2023 to events like King Of The Hammers, the MINT 400, Overland Expo West and more. The ultimate goal is to enter the vehicle in the Baja 1000 NORRA Safari Class, where competitors participate in historic and restored race vehicles, as well as motorcycles, ATVs, modern race cars, and trucks. But first, those All-Trac rear drum brakes will need to go! 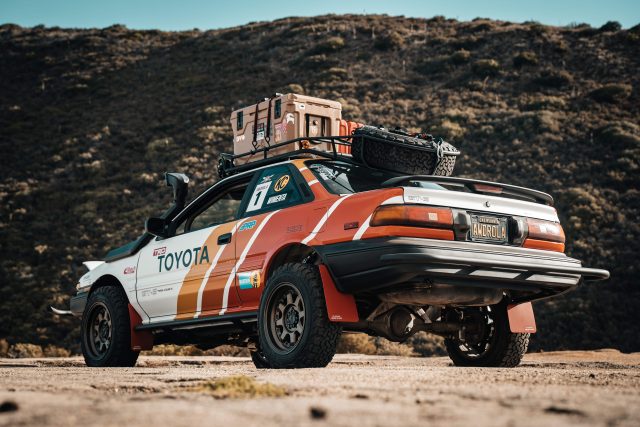 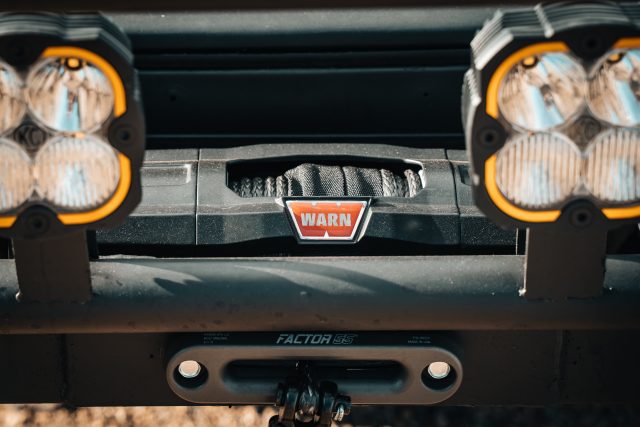 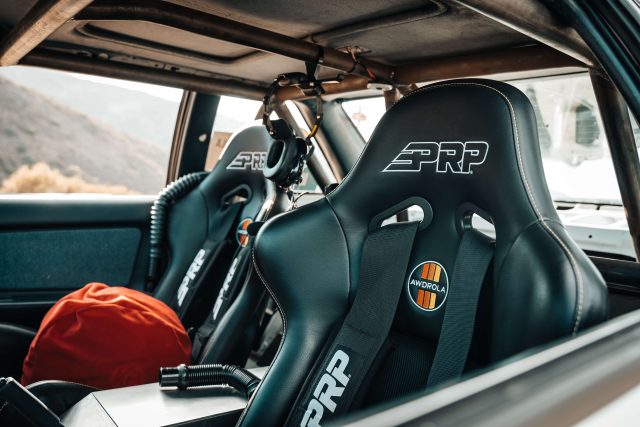 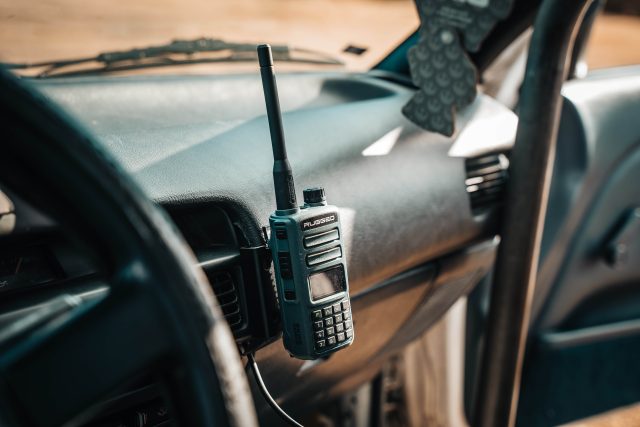 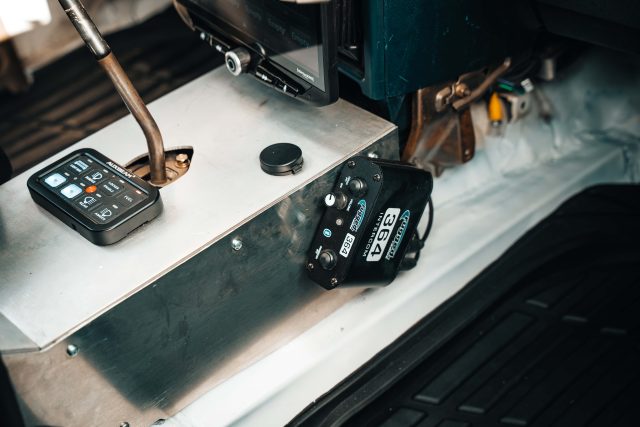 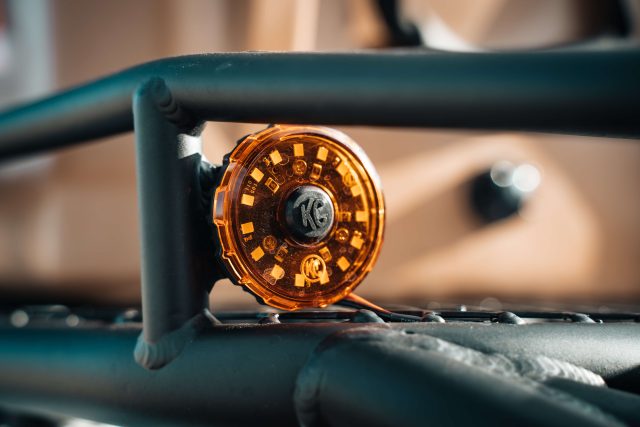