Johan de Villiers is a man who lives for adventure, and he designed his Defender 110 to take on the toughest environments. Johan has explored extensively in several South, Central, and East African countries with KTM and Triumph Tiger motorcycles and by Land Rover. He enjoys traveling Southeast and Central Asia, including hiking Nepal and sojourning with remote Cambodian jungle tribes on the border of Laos. De Villiers is a seasoned off-road and motorcycle rally racer, qualified helicopter pilot, high-altitude mountaineer, and a regular contributor to various overland and aviation publications. He earned his most epic travel experiences during overlanding trips through Africa and Asia, and he had the opportunity to study a variety of expedition vehicles on the road. These encounters with every shape and size of overland platform endowed him with a very clear vision of what type of vehicle would suit him, his pursuits, and his style of travel best. This is a man who clearly knows what he wants to get out of life. 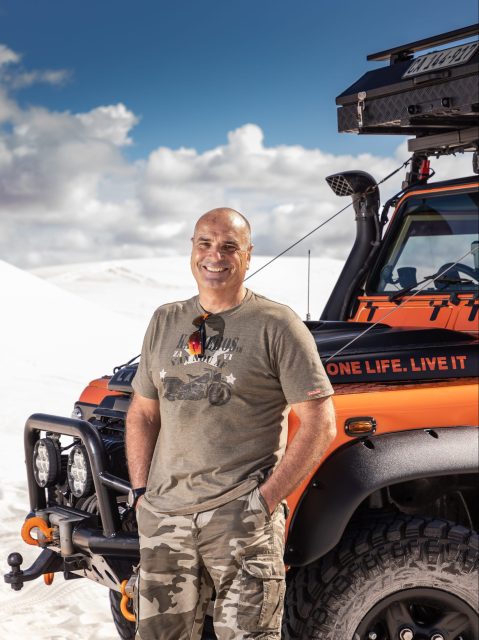 Why did he choose a Defender? The high gross vehicle weight (GVW) rating, all-round independent suspension and disc brakes, ladder-frame chassis, and aluminum body are some of the key features of the classic Defender. The Land Rover TD5 diesel engine is also easy to work on and, despite initial consumer concerns when the engine was introduced in 1998, has proven to be nearly bulletproof in adverse conditions. The most commonly anticipated weaknesses are the single ECU (with the issue of oil running through the electrical loom) and the dependence on an electronic crank position sensor (CPS), which renders the vehicle immobile if faulty, but oil in the loom is not a common or terminal problem. However, the CPS can and will let you down, so pack a spare if you intend to travel with a Td5 (the part in the packaging is the size of a bar of soap). Luckily, spares availability for the Defender throughout Africa and on most continents is generally quite good. De Villiers has owned many Land Rover Defenders over the years—he knows their strengths and weaknesses all too well. 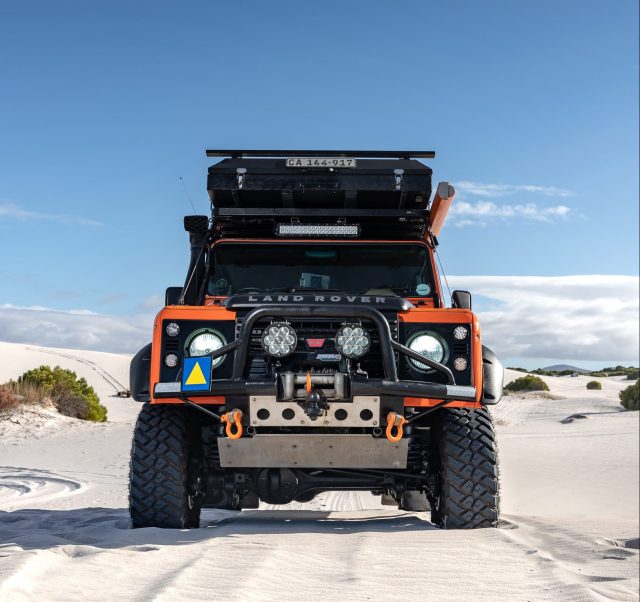 In 2015, a double-cab pickup Td5 Land Rover Defender came up for sale in George, on the Garden Route Coast of South Africa. De Villiers spontaneously hopped on a plane, purchased the Defender, and drove to Cape Town. This Landy was not going to live the easy life of a weekend warrior. Since 2015, Johan has driven the vehicle nearly 190,000 miles to over 14 different African countries. The majority of that exploration has been in the Zambezi region, the Okavango Delta in Botswana, and the Serengeti in Tanzania. 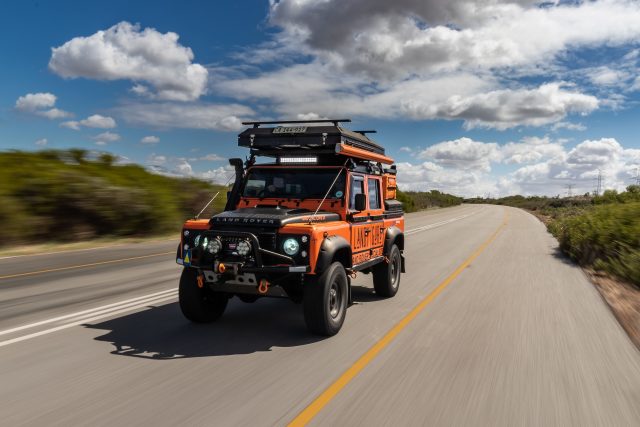 The first thing you will notice about the Defender, dubbed the “Monster,” is the screaming orange color scheme; even the awning, spade, Hi-Lift jack, and axe are splashed in vibrant orange. De Villiers’ love for KTM rally bikes had a lot to do with the visual cues of the vehicle, which began life with a much tamer limestone white livery. There are two schools of thought when deciding on a vehicle’s exterior appearance: blend in or stand out. Both have their merits, and reflect the personality of their drivers. If we had to guess, we would say that Johan is an extrovert. 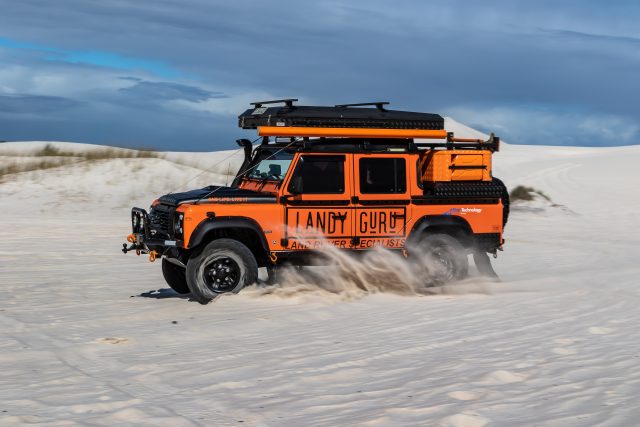 Working with Landy Guru in Cape Town, South Africa, modifications were carefully considered during the design phase following a form-follows-function approach. The purpose of a build should be the starting point for its design. As and when budget became available in between de Villiers’ other travels around the world, the process followed a phased plan and took approximately three years from its inception to complete. Johan was to learn that sometimes, a drawn-out strategy can present unexpected challenges. With the next build, he would rather commit to a short-term one-off project, as this will allow for better integration of electrical subsystems on the vehicle. 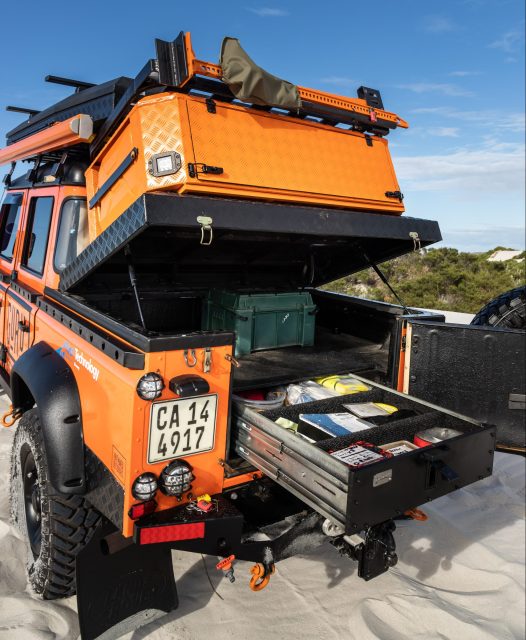 De Villiers reasons that technology progresses quickly when you take the long-term phased approach. You may find that a modification from two years prior has been superseded with better options in the meanwhile. Johan is a technology-driven person, and the Land Rover reflects that passion. As with exterior appearance, auxiliary technology is also a personal choice. Some overlanders prefer a basic system with minimal tech (less to go wrong, they say), while others may prefer a sophisticated system with a myriad of lights, switches, apps, and Bluetooth controllers. While expensive, tech can be fun and useful, provided the user clearly understands the processes, and with override options or the ability to maintain systems in the field. 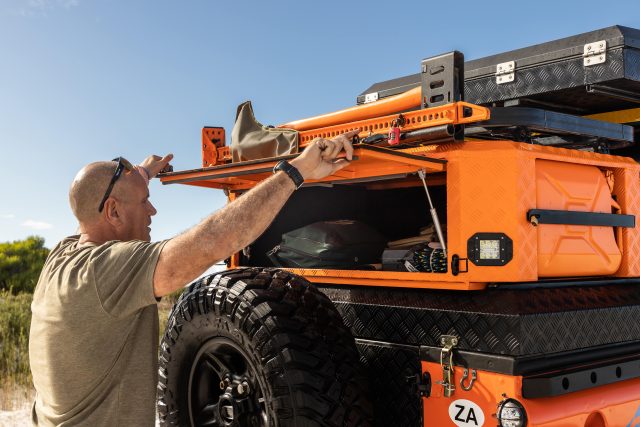 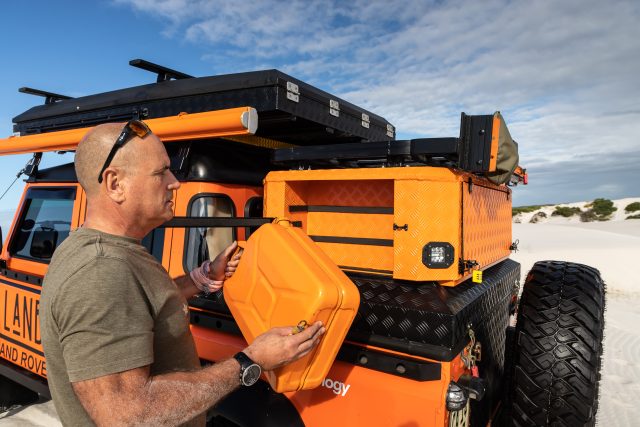 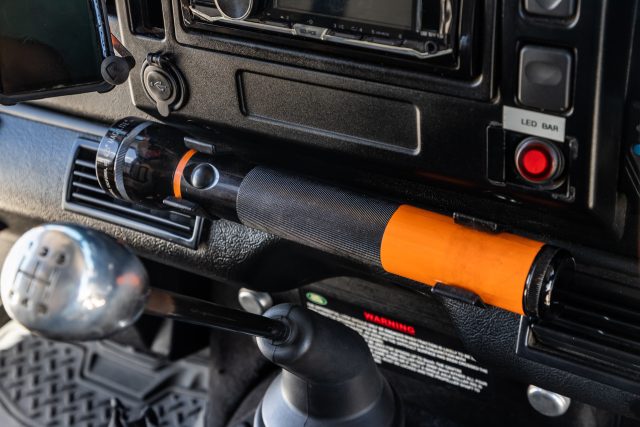 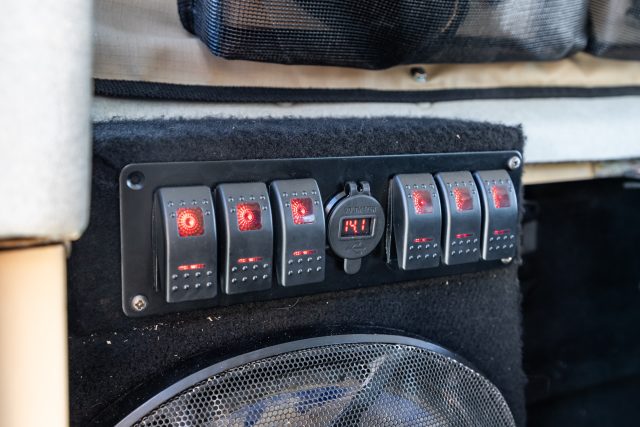 The vehicle is unique from a number of perspectives. The visual design and color make it easily identifiable even at a distance, and the practical, multi-level storage of the rear load boxes is enviable. The compact load bed houses a number of Front Runner Wolf boxes, and a drawer system is sealed by a sturdy lifting cap, above which sits a neat secondary load box with integrated jerry cans. Above that, a small rack allows for the storage of additional gear, firewood, etc. The bed of the double-cab 110 is best described as diminutive, but these modifications have turned an overall negative of this vehicle into a net positive. If Land Rover were still producing the classic Defender, they would be hard-pressed not to duplicate de Villiers’ design. Load bars are affixed to the wedge rooftop tent, which allows for the transportation of large, lightweight gear such as a kayak or duffel bags. The rear seating area doubles as further storage and a home for the fridge. 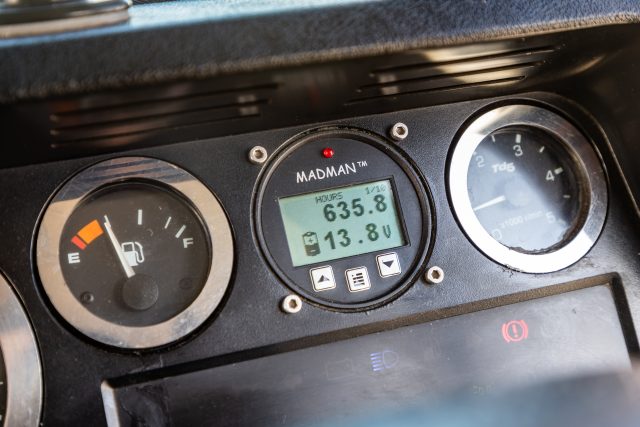 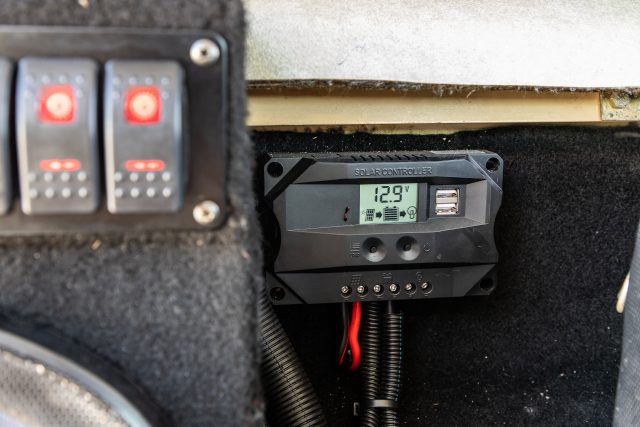 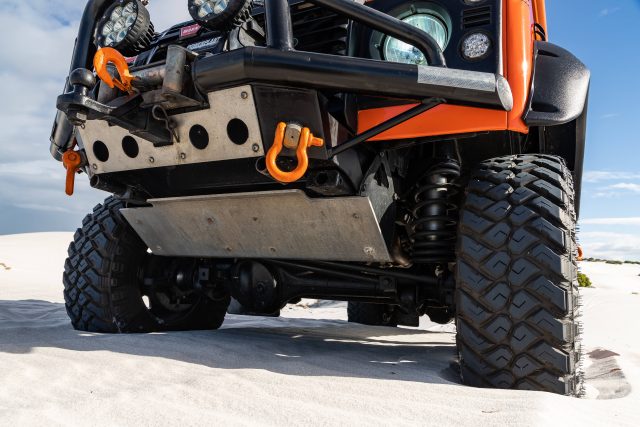 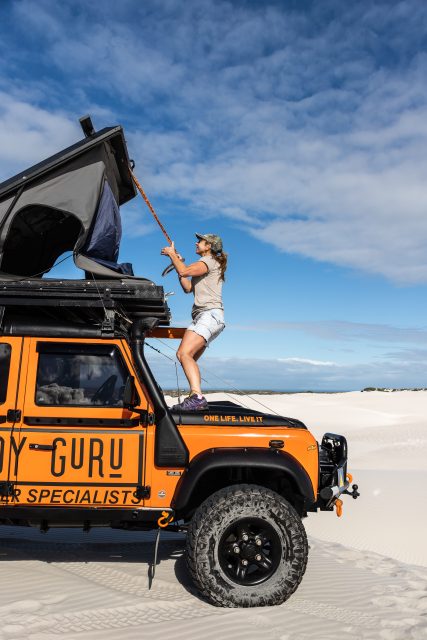 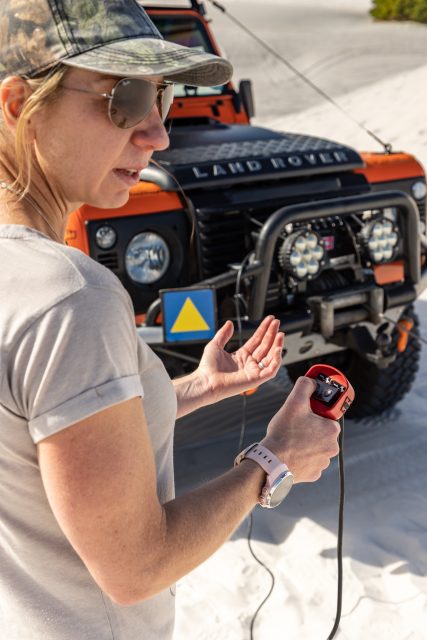 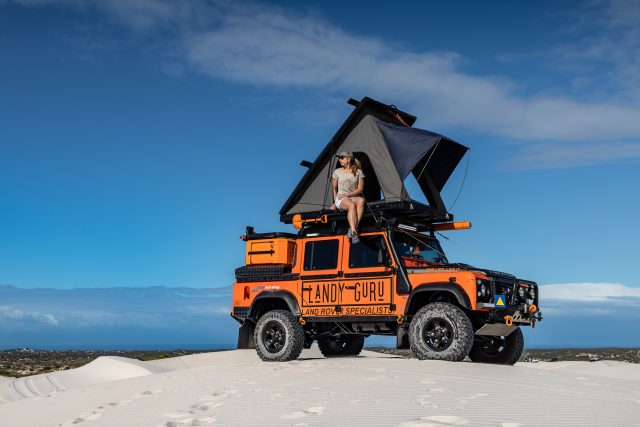 Equipped with a roof tent and awning, the Monster is not designed for long-term, continuous overland travel and comfort, as has become the standard these days. Instead, the Defender is designed to be compact and capable, a vehicle that can take on long distances and challenging trails with confidence. Despite the bright and modern appearance, the Monster is true to those original, hardy overland vehicles which were built to cover long distances over varied terrain and terrible roads, if roads even existed. Approach and departure angles remain excellent, and every vulnerable corner and surface has been reinforced and protected; multiple recovery points ensure that whatever the vehicle gets stuck in, it can get out of. As de Villiers prefers to travel either alone or with his wife, Kim, the vehicle is equipped for self-recovery, allowing the pair to escape the crowds worry-free. Form has, indeed, followed function. 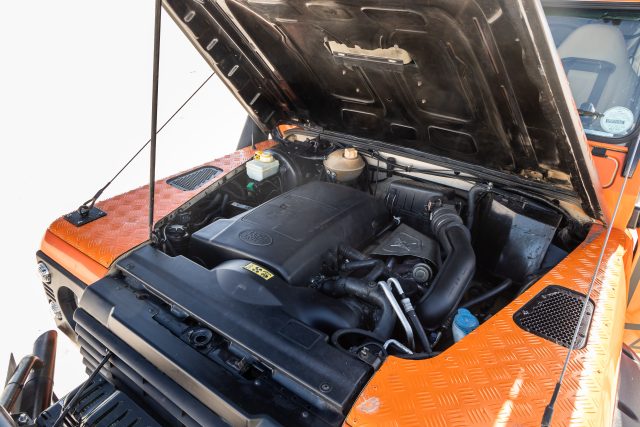 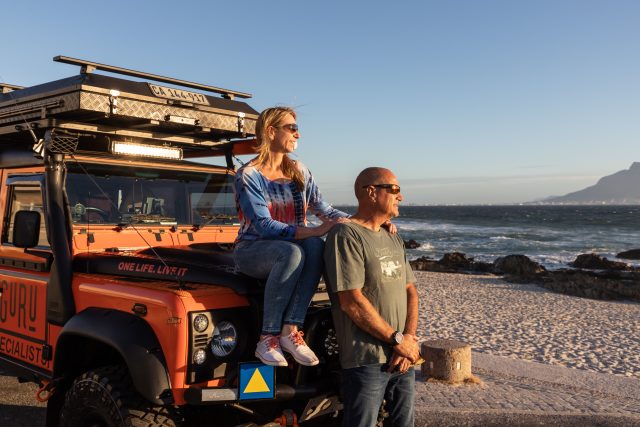