Video creator Eva zu Beck admits she began traveling by vehicle for a change of pace. At times, a hectic YouTube travel schedule saw her bouncing from Turkey to Afghanistan, Iran, and Pakistan, and while this was exciting, it was also draining. “I craved the freedom that comes with being able to roam anywhere by myself over a longer distance,” she says. “Spending a month in a place I really enjoy, and not worry[ing] about the logistics of the next trip.” Eva has done just that, overlanding through parts of Europe and Turkey, and tackling the Pan-American Highway in “Odyssey,” her navy blue 2006 Land Rover Defender 110. 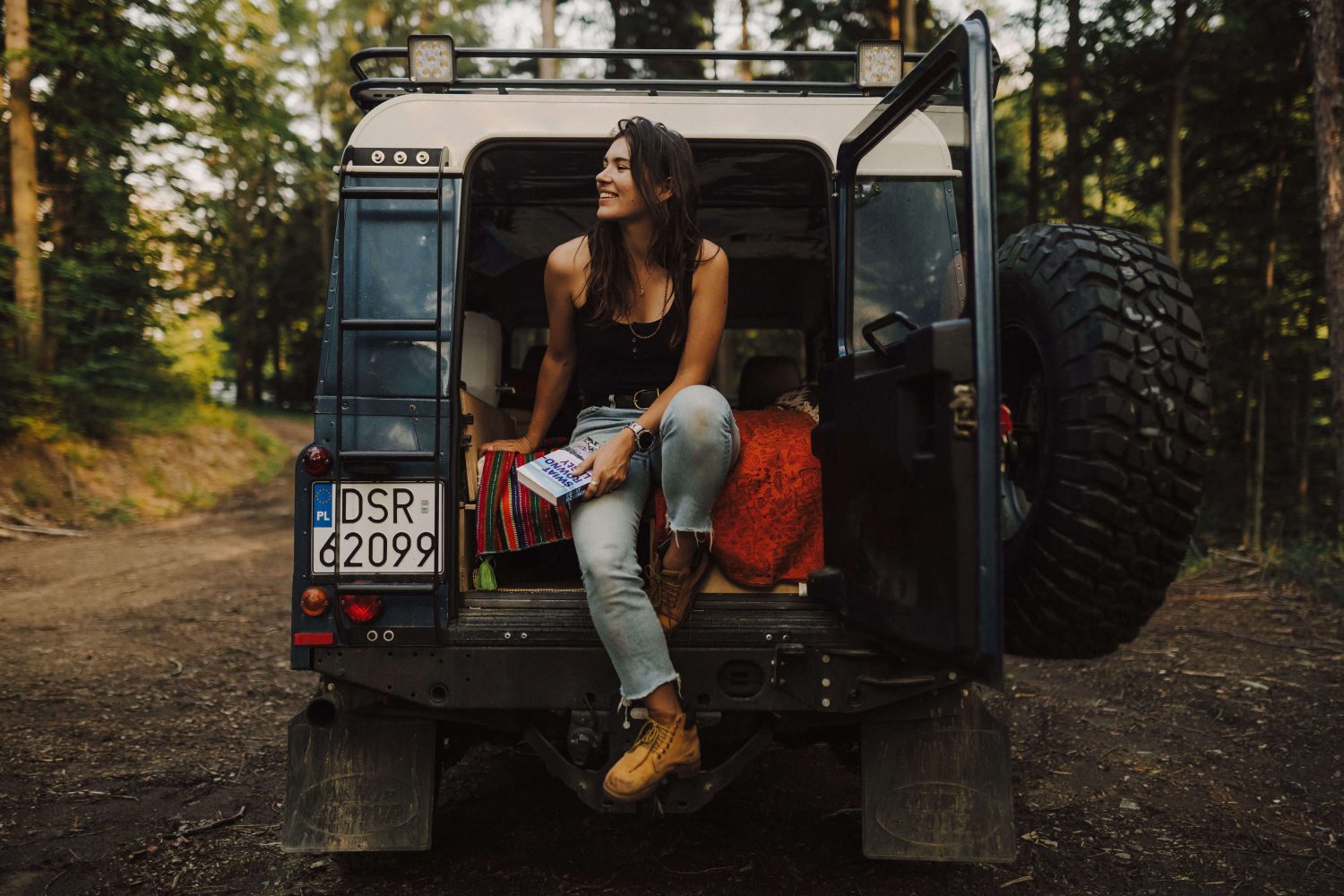 Featuring an Alu-Cab Icarus roof conversion, a custom-built interior, and a diesel heater, zu Beck’s Defender has undergone quite a transformation to prepare it for the remote roads of Alaska and Patagonia. Purchased through an online marketplace, Odyssey was the first vehicle ad that Eva clicked on when she decided to travel by vehicle. “The Defender was always a dream car for me,” she explains. “I just love them … how they look and feel.” Zu Beck’s excitement is palpable, and captured beautifully, as she drives off in the Defender for the first time in “I Bought My Dream Truck.” The driver’s door requires a hearty slam to shut properly, air-conditioning is non-existent, and the puny windshield leaves something to be desired. But the promise of independent adventure in her own space ruled all. “I could have bought a car that would be more comfortable and convenient and easier to fix. But I don’t want a car that is comfortable, convenient, and easy to fix—I want a car that has soul. I want a car that I can relate to, that can be my home. That’s what the Defender does for me.” 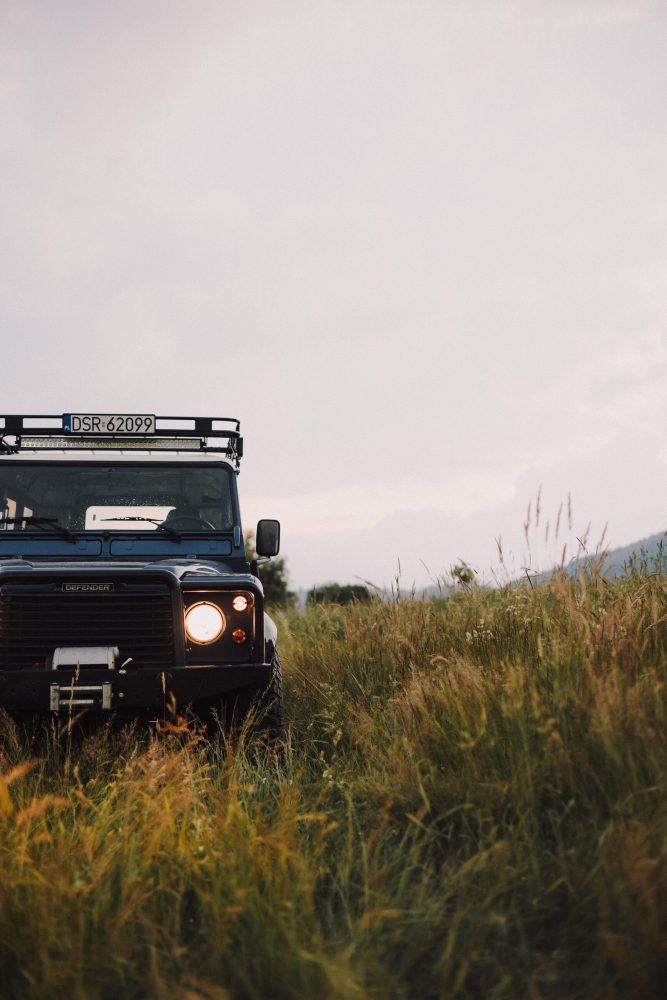 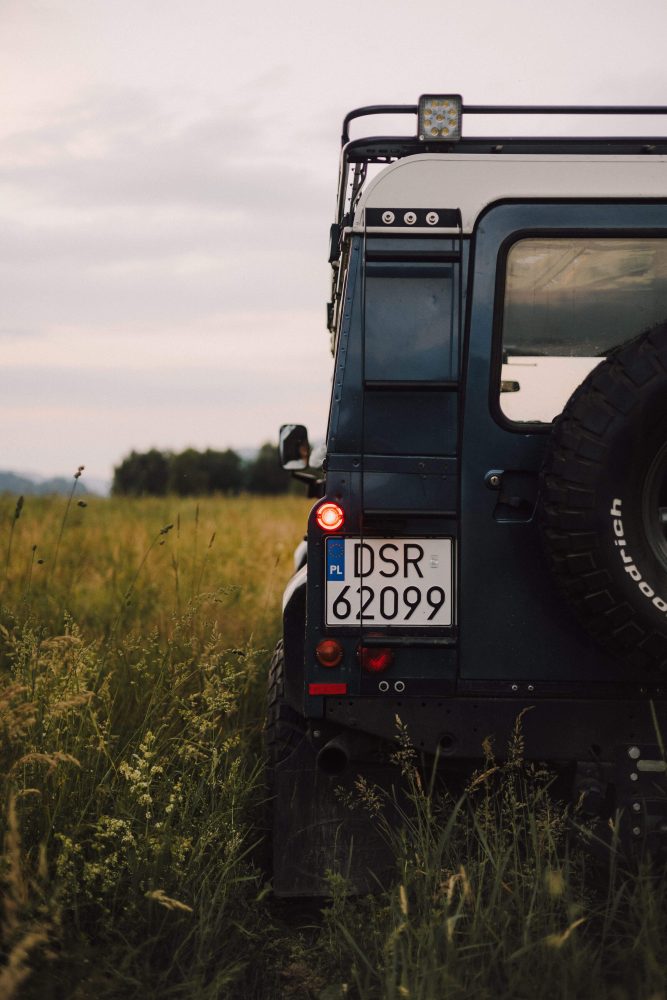 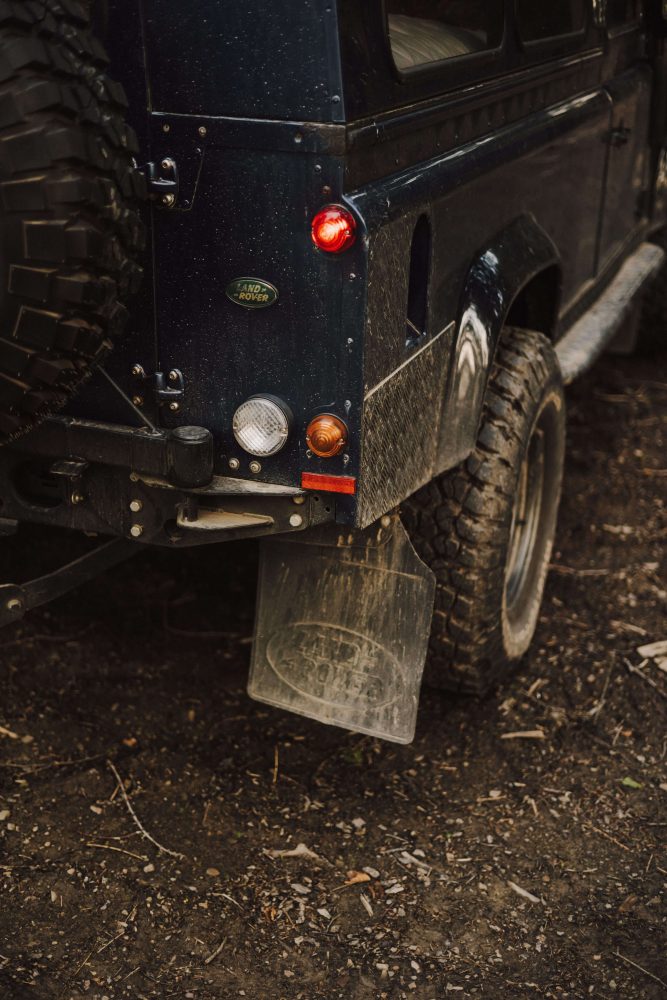 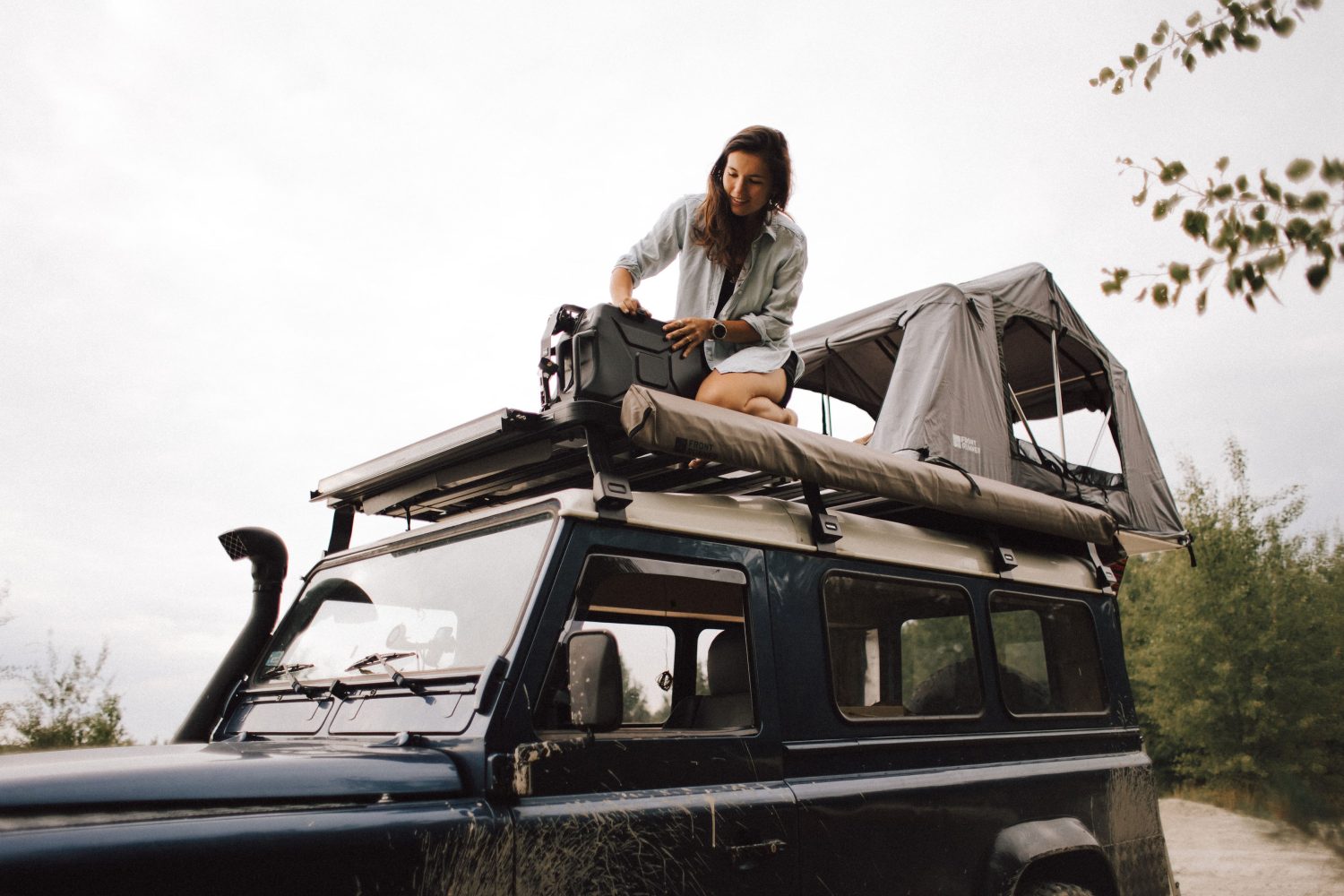 The conversion of Odyssey, Version 1.0, required the involvement of Eva’s uncle Andrzej (a professional carpenter) and her brother Tomek, who offered to help with the transformation. After gutting the rear, Eva installed industrial-grade insulation on all interior surfaces, while Adrzej added support beams for the floor and a bed platform made from waterproof plywood. Zu Beck’s new living space balanced the comforts of home with multi-functional pieces, including custom-sewn curtains (the second set worked like a charm), storage boxes beneath a folding bed, a cupboard that converted into a desk and kitchen space, and above-window storage cubbies. Final touches included a tailgate table, water tank and spigot, and a host of Front Runner accessories: a roof rack and rooftop tent, awning, extra fuel can, light bar, outdoor shower, and a spare tire mount braai and barbeque grate. Finally, Odyssey was in good mechanical condition but required some preventative maintenance before setting off, including a fresh fuel pump, wheel bearings, one of the drive axles, and an immobilizer removal.

“People always tease me that I should have bought a Toyota,” Eva says. The heated Toyota versus Land Rover debate came as a surprise to her—especially when Odyssey succumbed to a transmission problem in Cappadocia, Turkey, and folks reacted via comments and messages on social media. “You should have bought a Land Cruiser” didn’t amount to an inspiring pep talk as zu Beck navigated her first time-consuming and expensive breakdown in a country where she couldn’t speak the language. Unfortunately, a shoddy repair job resulted in another transmission failure 30 kilometers down the road, so Eva had the Defender fixed in Ankara by a leading Defender transmission mechanic named Isa. “All cars break down at some point, especially 16-year-old ones,” Eva wrote on her Instagram page. “This is the thing I feared the most when I set off. It’s happened, and … it’s not that scary. In fact, with the help of kind people, it’s manageable.”

After putting the Defender to the test by traveling from Poland to Croatia and through Montenegro, Albania, and Turkey, Eva eventually shipped the truck to Veracruz, Mexico, eager to begin her Pan-American expedition. But she soon realized that the current setup had drawbacks, especially with the addition of her new German shepherd, Vilk. “Storage has been a major pain point, getting Vilk up to the rooftop tent was becoming harder by the day, and a million minor inconveniences made this small living space a daily struggle.” 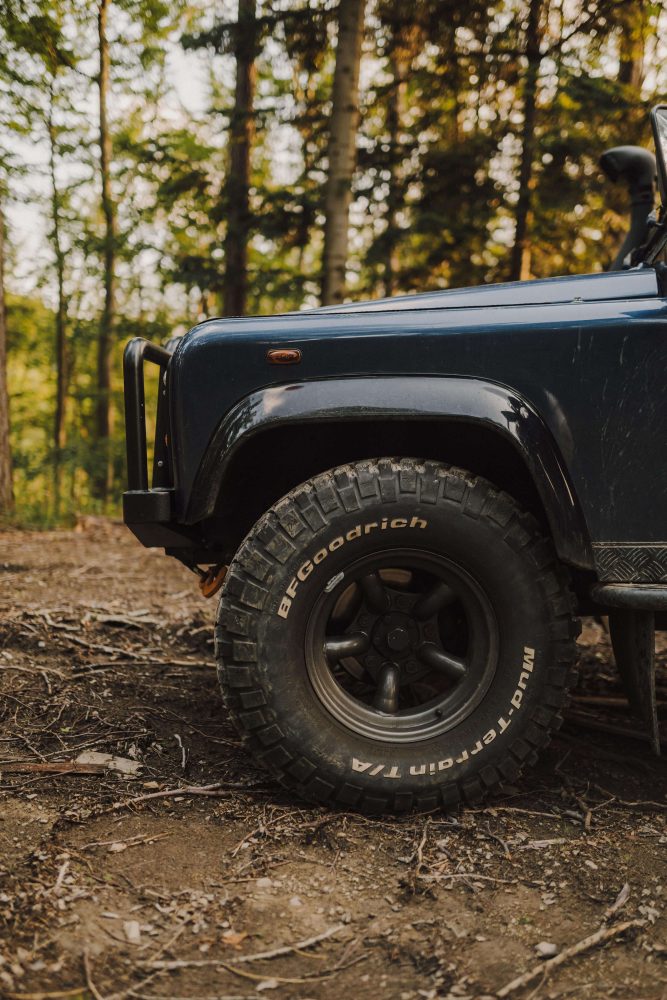 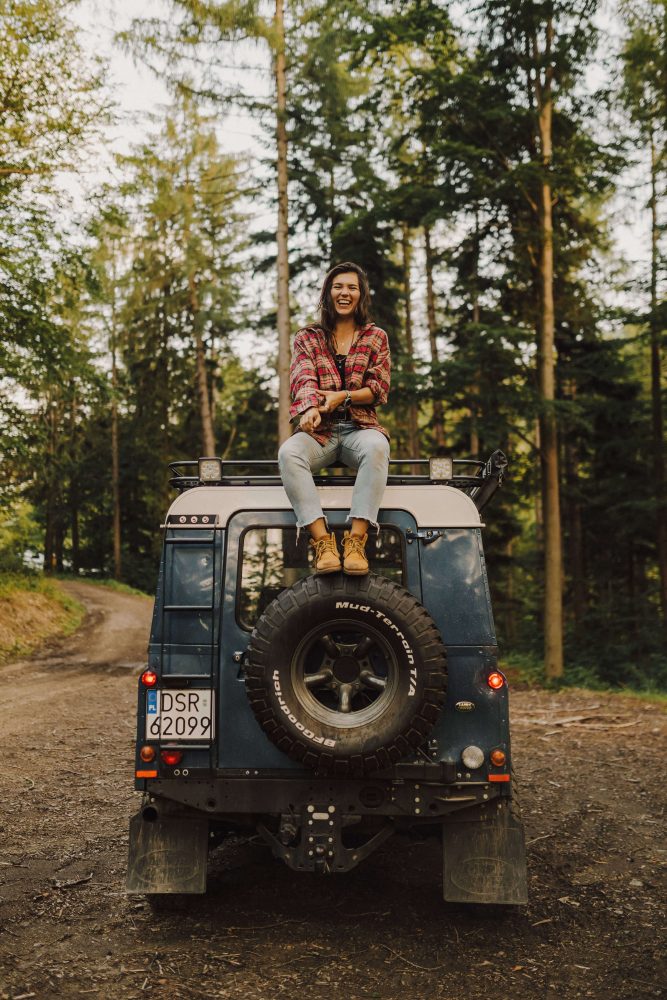 OTB Fabrication, based in Bend, Oregon, completed the next version of zu Beck’s Defender build, which prioritized storage space and functionality. The crew blacked out a rear passenger window with a carpet-covered wood panel, upon which Eva attached Velcro pouches for additional storage. She also strung up a hanging fruit bag, mirror, and canvas pouches to a Mud Stuff MOLLE panel on the back door, which housed spices, cutlery, and toiletries. Small additions, such as a cargo net tacked on the underside of the Alu-Cab sleeping platform, provided space for jackets and backpacks. But perhaps the greatest transformation came from the Alu-Cab Icarus roof pop-up conversion, which Eva says took “living in the truck to a whole new level,” and an extensive interior furniture makeover, including a new seating area, bed platform, and butcher’s block countertop housing a 13.5-quart SetPower FC12 fridge. Eva and the team at OTB Fabrication also removed the passenger seat to make space for an air-conditioning unit to keep Vilk nice and cool during long, hot driving days. 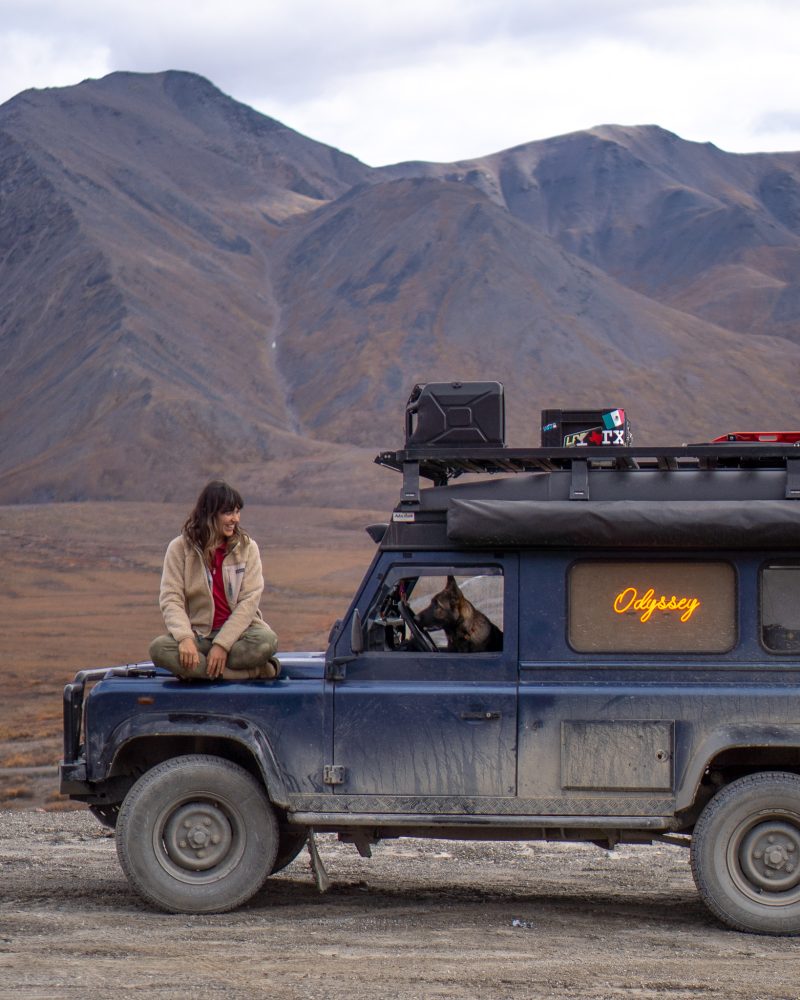 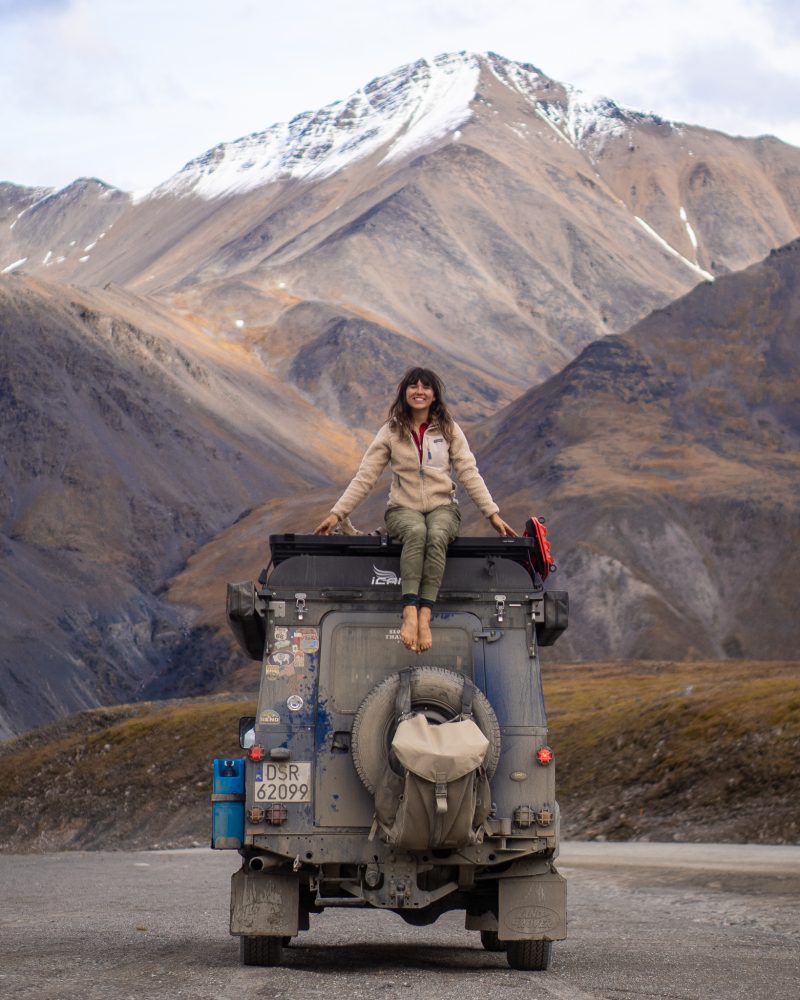 Eva would experience another hiccup on her way north to the Canadian border: loose wheel nuts. When she put a new set of wheels on several days earlier, the torque wrench gave a false reading. Understandably, driving exacerbated the issue and damaged the wheels permanently. Fortunately, the Land Rover support network is a beautiful thing. Tony and Brian of Defenders Northwest, based in Gig Harbor, Washington, stepped up with a healthy set of wheels that would get zu Beck to the top of the world to Prudhoe Bay, Alaska.

“The Alaska leg was undoubtedly going to be the litmus test on a lot of the systems I’d put in place,” Eva admits. The journey to Prudhoe Bay, the northernmost point of Expedition Wild, which zu Beck has named her 30,000-mile endeavor across the Americas, has a reputation for illuminating weaknesses and systematically destroying any wheeled machine that dares to take it on. Fortunately, many of the systems she had put into place proved their weight in gold. “I was excited to know that the diesel heater held up extremely well in the frigid temperatures, heating the interior to a very balmy state,” she says. “I had to switch it off in the middle of the night—it worked pretty intensely even on the lowest setting.” Another success was the Icarus roof conversion. Despite windy nights, the tent held up well, resulting in warm, sound sleeps.

What didn’t pass the test, unsurprisingly, was the water tank. “As is expected of an exterior water tank, it froze up in sub-zero temperatures, making it impossible to get water in the mornings.” Fortunately, Eva prepared for this eventuality by storing water inside the truck. Overall, however, she was impressed with how well the Defender handled the long, rough trek to Prudhoe Bay. “My setup may be minimalistic,” she notes, “but with good weather on my side, I found it just about comfortable enough for that leg of the expedition.” 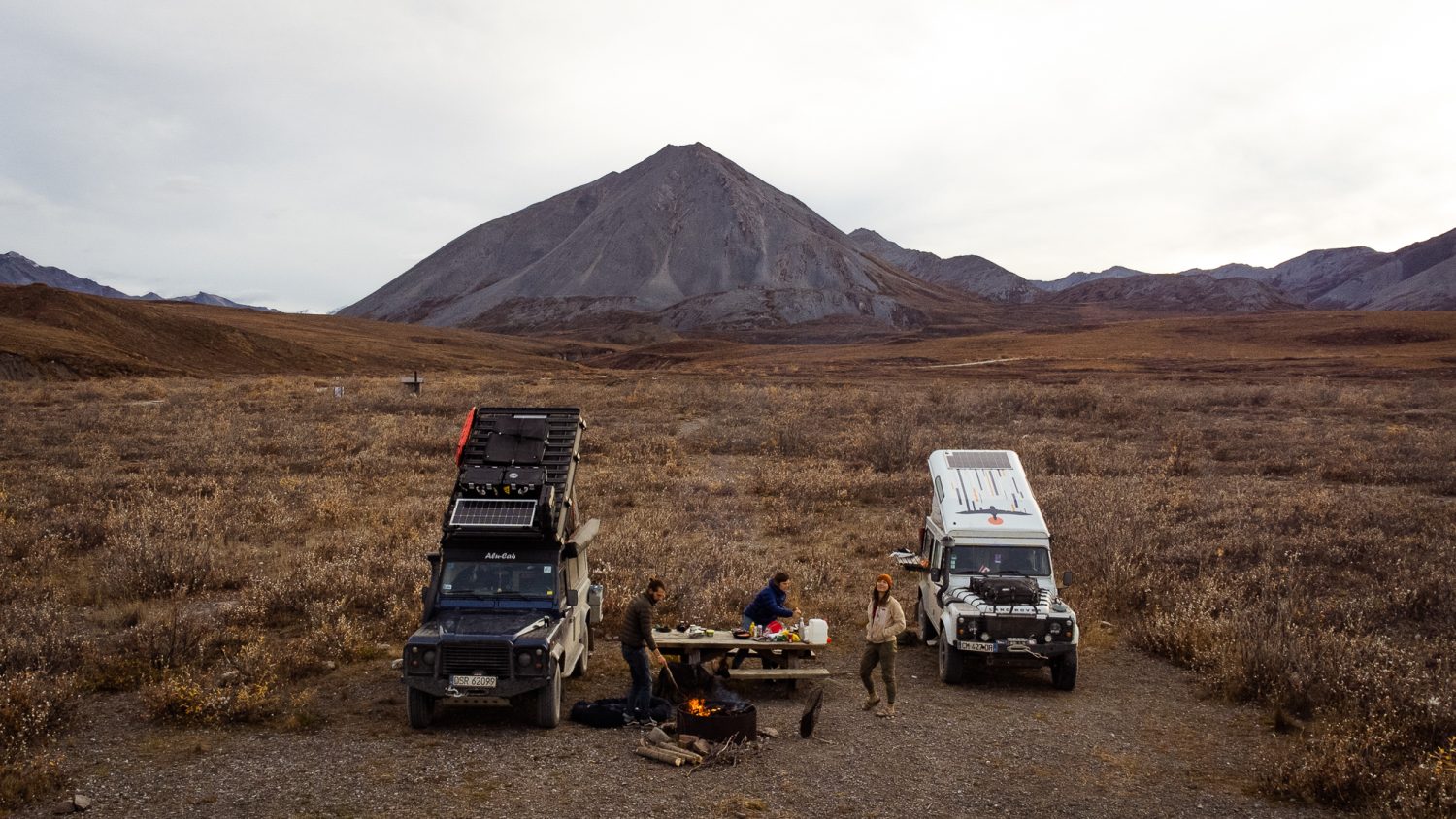 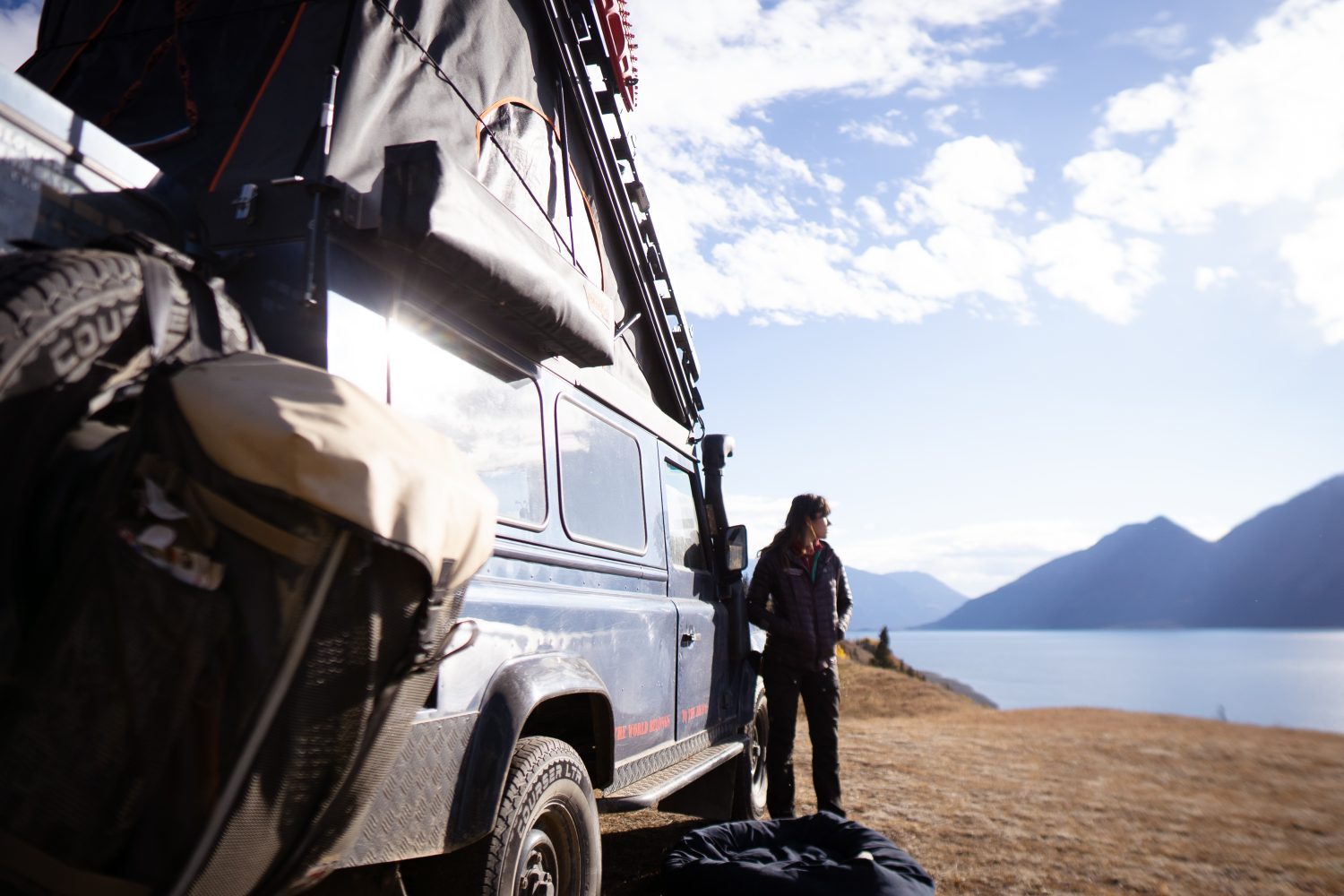 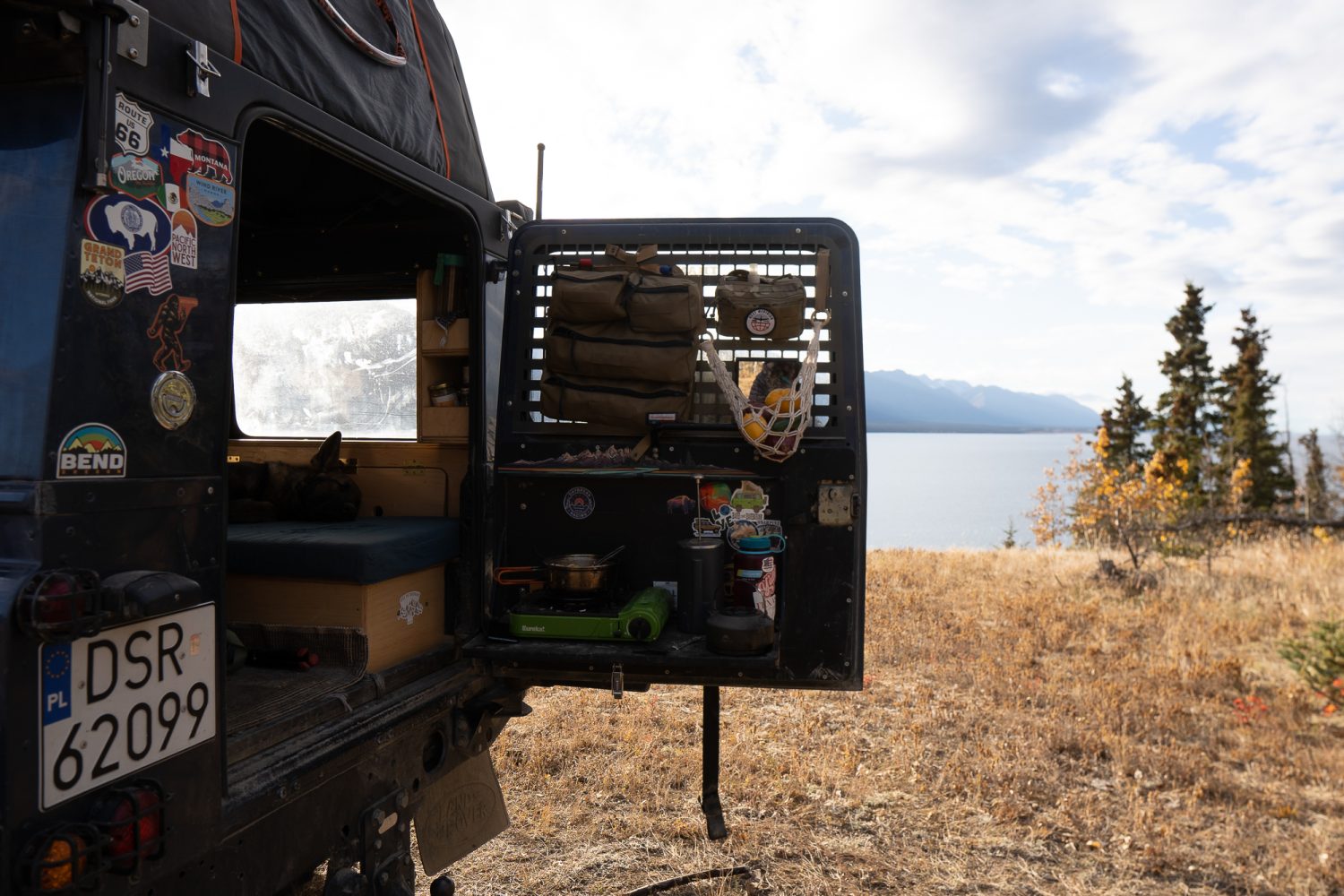 Currently heading south to escape sub-zero winter temperatures, perhaps zu Beck, Vilk, and Odyssey will be tempted by the sun-filled skies and trail-running opportunities of Baja California Sur, or maybe Mexico’s Sonora Desert awaits. But one thing is for certain; the Defender has offered Eva the freedom to roam. “Converting Odyssey into a tiny little camper has allowed me to slow down, have the sense of a continuous journey, and, most importantly, feel free, Eva says. “Not the most convenient, comfortable choice, but I love her, and that’s all that matters.” 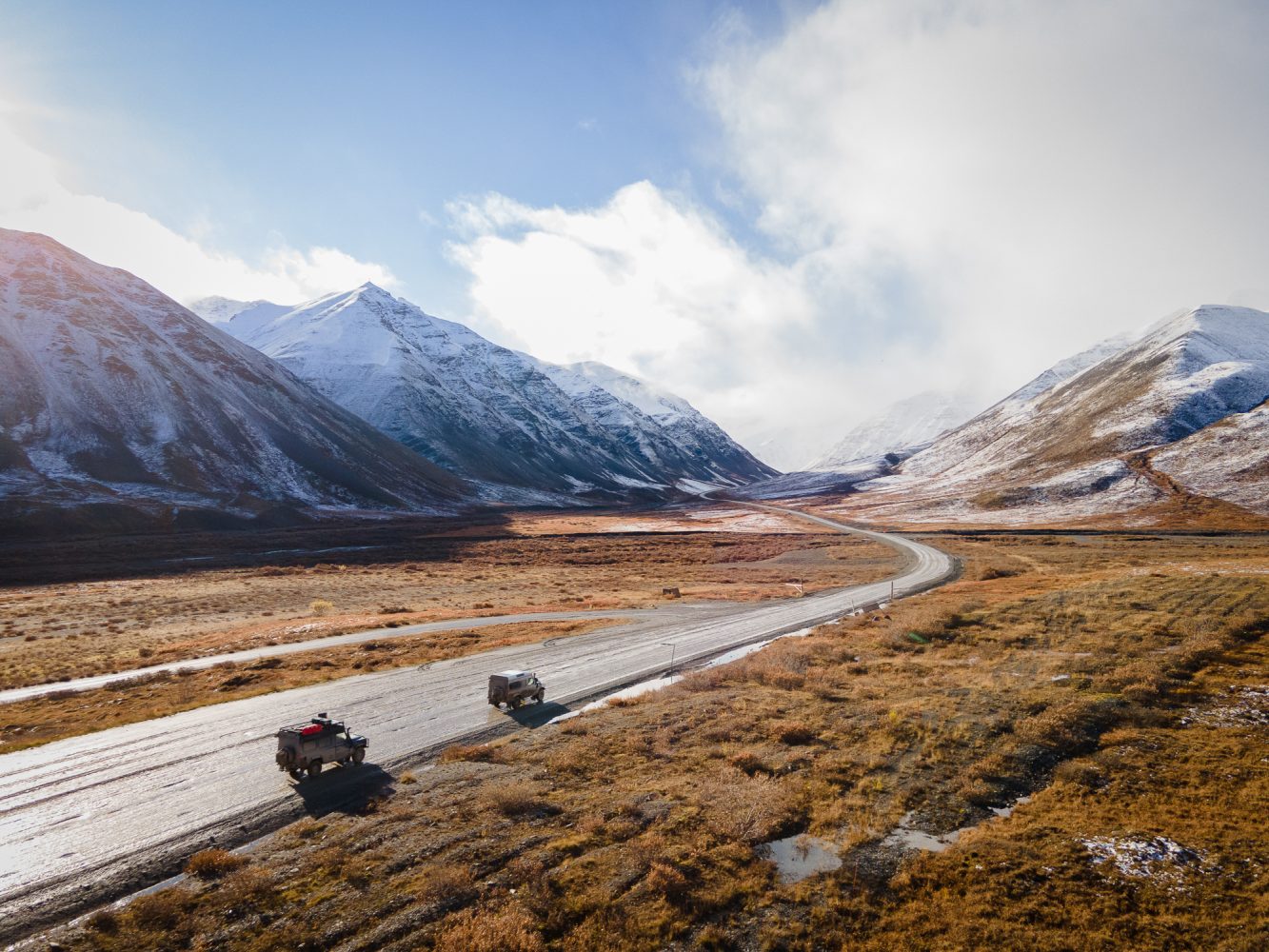 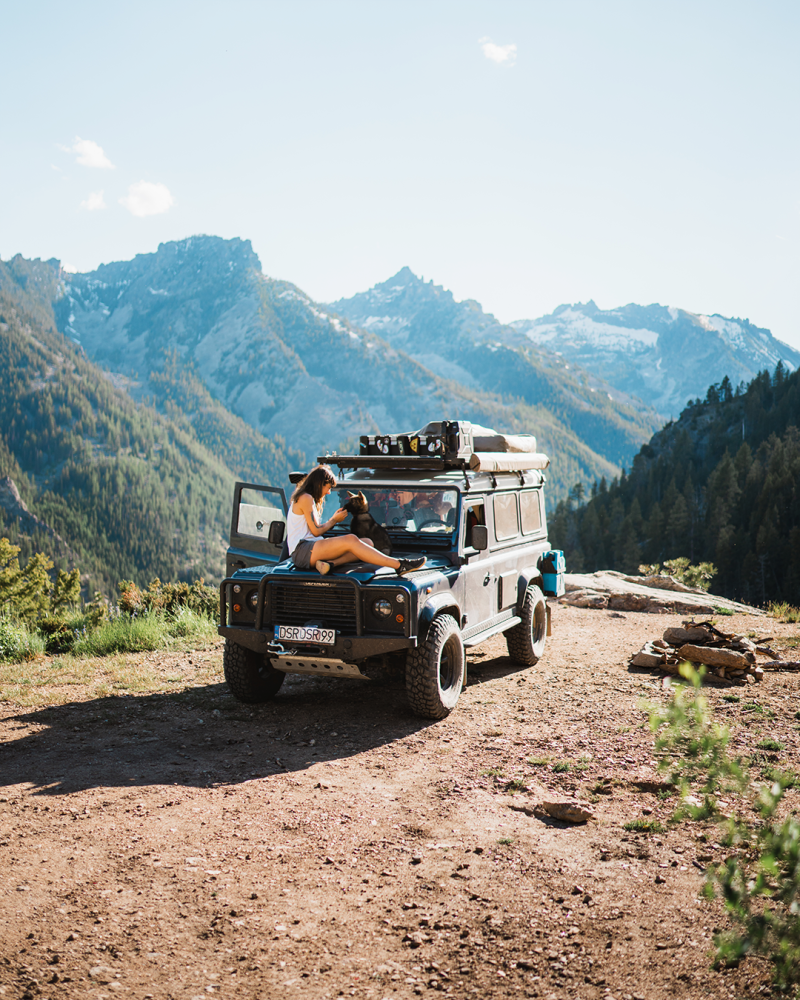