I’m writing my column this month from the road, again. Team Equipt is on day 13 into our two month expedition and are now in Antigua, Guatemala. Our gracious hosts, James and Angela Brown of No Limit Expeditions, have allowed us to spread out in their beautiful la hacienda and take over the internet connection.

Our trip this year has been labeled “Expedition Mundo Maya” in honor of the Mayan calendar coming to an end December 21, 2012. This will mark the end of the Maya Long Count, a 5,125 year cycle of time that began on August 11, 3114 B.C.

Our friend Jimmy Buffet summarizes the Mayan Calendar with a little humor in one of his songs when he says, “Bad news is the world is ending. The Good news is there’s a party, but you better get here quick!” With this in mind I intend on being atop some Mayan Ruin deep in the Peten of Guatemala, most likely Rio Azul, on that date. We will have a date of December 12, 2012 this year and December 21, 2012 also marks the Winter Solstice. Is this just a coincidence or were the Mayan’s that good at predicting astrological happenings thousands of years ago?

Our trip south this year is based on using our overland equipped vehicles to get us comfortably from one Mayan Ruin to the next. Although we are very well prepared for the mud, jungle and river crossings, most of our trip will be on rural dirt and badly paved asphalt roads. Our total mileage is going to be around 10,000 miles.

We started our trip at the Mexico border town of Reynosa where, within 5 minutes of crossing, we had been accused of not coming to a complete stop at a stop sign. With threats of a $400 fine and the towing of Paul’s really nicely equipped 100 Series Toyota Land Cruiser as a reality, we negotiated it down to $20.00 USD and were off! With bad cops behind us and a lot of cuota/toll roads ahead, we didn’t stop for over 300 miles.

Over the next 3.5 days we drove hard choosing the cuota every time over the libre/free road. This cost us approx. $170.00 USD extra per truck, but saved us several days of travel. Midway through day 3 we arrived at our official starting point of Palenque in the Mexican state of Campeche.

I will say that our entire team including Paul May, Beverly Edmonson and myself were very relieved when we finally pulled into the Maya Bell Campground. This is a place we have stayed several times before and always meet other like-minded travelers with good intel on the road ahead.This is also one of the closest places to stay and you can actually walk to the ruins in about 30 minutes.

Palenque or “fortification” was named by the first spanish explorers who saw its building rise above the jungle floor. They were up on a tall hill just above the Usumacinta River when it was spotted. Palenque, in general, was a small Mayan site that only supported about 6000 total inhabitants at its largest. It seems as though no more buildings were built and the place was abandoned around A.D. 800. We only scratched the surface in our three day visit, but wished we would have had at least a week to learn more about this ancient place. 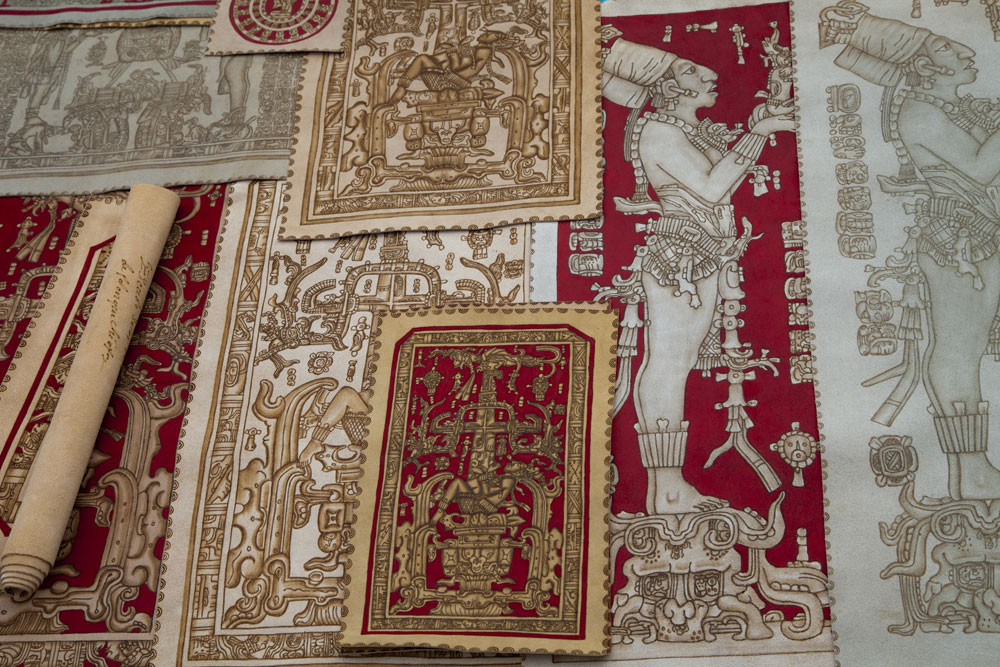 One thing to note is that on the way down through Mexico we only saw one American traveler, and that was our good friend David Gurley and his family. The Gurley clan was heading north after an overland trip down to Guatemala. It seemed that every campground that we came to was completely empty of travelers with the exception of our stay at the RV & Tennis Club in San Miguel de Allende. We had to beg to camp in this popular overland hangout due to its small size and the New Year’s camping crowd. 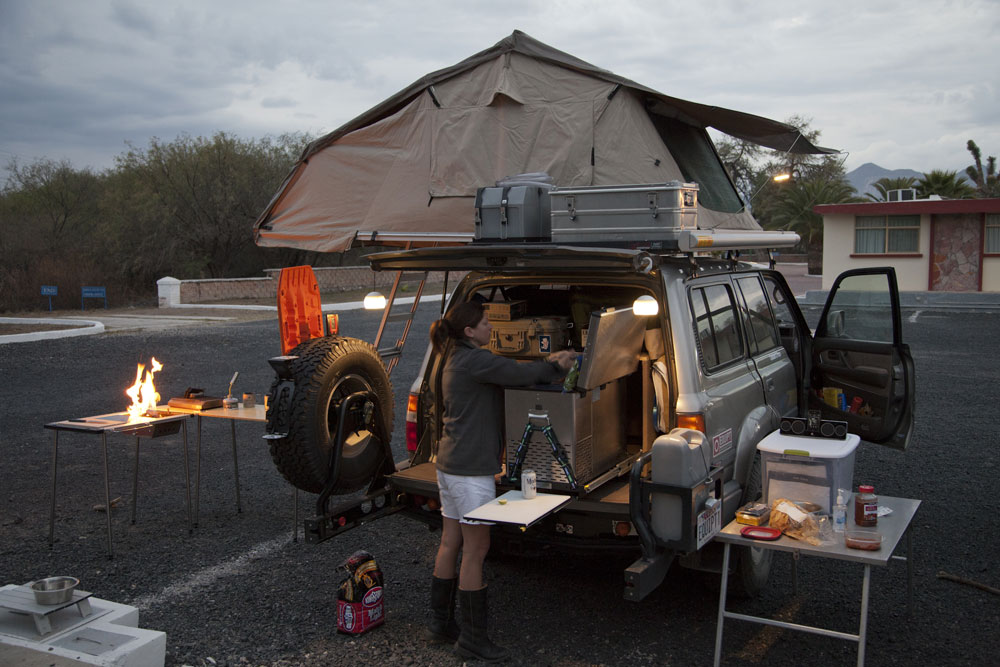 Our next stop after leaving Palenque was Bonampak Ruins. These are located extremely close to the Guatemala border and are about 100 miles southeast from Palenque. Some people do this as a day trip, but we got here a little late and wound up camping in the parking lot. After an early night to bed we got up and were the first arrivals to the ruins and had them all to ourselves for over an hour. Even at its busiest there were less than 100 people here. The reason one makes a trek to the out of the way Bonampak Ruins is to see the brightly colored original murals that grace the walls of three vaults. These vaults lay atop the Temple of the Murals. These scenes were painted around A.D. 800 and depict a great blood bath of a battle fought in A.D. 792. Another scene in the far right vault shows 6 Mayan women piercing their tongues in what was then a religious ceremony. Now this is done by teenagers and others for decorative art? Another very unique artifact to view while at Bonampak is the monoliths. These vertical slabs of limestone were carved over one thousand years ago and have remained upright through all of the natural disasters and storms to this day (not that Beverly and Paul didn’t try to change this). The main structure at Bonampak is the Acropolice and was built over a thousand year period.

Our next stop on the way to Guatemala would require a back track almost to the city of Palenque before turning south to the mountainous town of San Cristolbal de la Casas. The state department recommends that American travelers do not travel this road due to high Zapatista activity. Against all warnings we made the twisty and hilly 150 mile drive in a very slow 5 hours. Arriving into San Cristobal at dusk put us downtown on the main plaza with all of the Saturday night revelers. This made for very narrow and crowded cobblestone streets with lots of live music and food everywhere. Once the maze of partiers was safely navigated we found our campsite (the only one in San Cristobal) which lay just on the southeast outskirts of town. Rancho San Nicolas is a very small campground which is walled and shaded and has very good internet. The next morning we were introduced to our next door neighbors from England who were driving an ex-military vehicle that had been outfitted by Overland Vehicles Ltd. They told us of a route that took us back out to the highway without going into town and we were very thankful as today would be the long drive across the Guatemala border to Antigua. 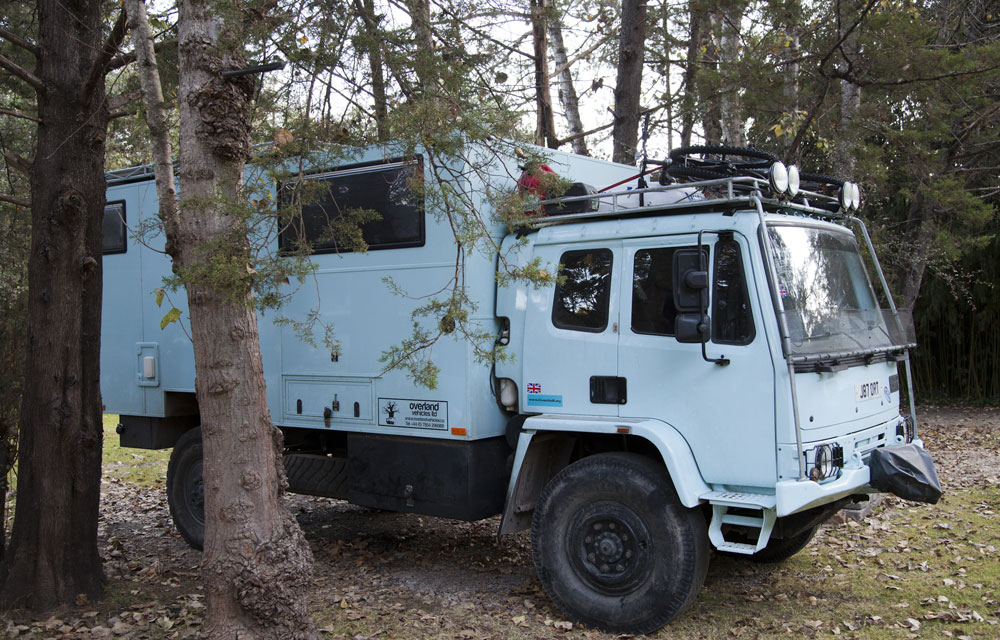 Since the beginning of our trip we have all been a little bit concerned about taking the dogs into Guatemala. Beverly and Paul had done a lot of research on getting our furry companions into the country and had even gotten official APHIS forms from the U.S.D.A to help the process. When we were at the border not only did the immigration officials not ask for any documentation they actually played with the dogs! I have to say that this border crossing from Mexico to Guatemala was the most pleasant of my traveling career. The border agents actually shook our hands and thanked us for coming to their country when it was all said and done. So after about $15 USD and one hour we were legal to travel Guatemala. 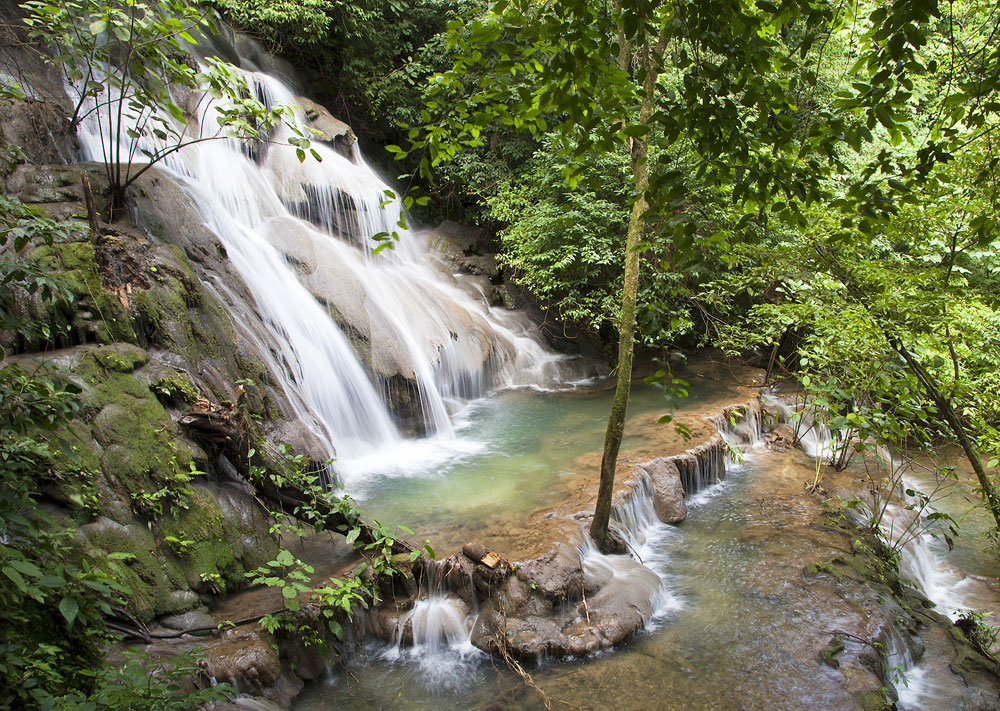 The trip to Antigua was long and slow, but easy. We played witness to one of the most spectacular sunsets near Lago de Atitlan. Although the huge body of water was hidden by low lying clouds, its surrounding volcanos were standing high and strong, protecting one of Guatemala’s most treasured places. Our timing (though random) could not have been better. We pulled off the road and setup the cameras just as the setting sun started its final count down. I think this meeting between our expedition and this sunset must have been predetermined.

Upon our arrival late into Antigua we were met by our good friends and Guatemalan hosts James and Angela Brown. If you don’t know this dynamic duo of overlanding you should! They as a team own and operate No Limit Expeditions which is based out of Antigua and specializes in guided trips throughout Central America. I have participated as the expedition photographer on three of their trips in the last 18 months and can personally say that they are top notch. As a side note, they are also two of Equipt’s most active ambassadors. Once settled into Hacienda de Brown which sports a coffee finca in the back yard, it was time to have some beers and catch up while relaxing in the couples incredible courtyard. 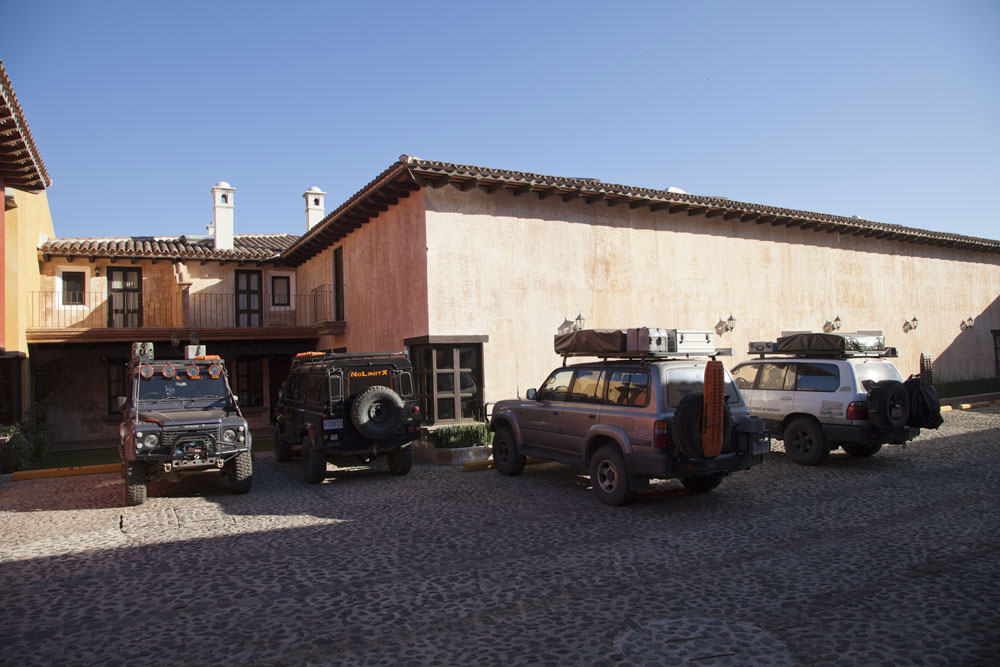 One of many highlights in Antigua was getting to observe the final touches on James’s 1969 Land Rover Series IIA frame-up restoration. Had I been one week later I would have gotten to take it for a spin around the plaza. Once finished the Series truck will be put to use on the No Limit Expeditions Vintage Road Trip. This one, along with a 1969 model, will be used to do the trip that will mostly cover the best inns and haciendas of southern Mexico.

La Antigua Guatemala, which means “Old Guatemala,” (most commonly called today) was the original capital of Guatemala and remained so until it was destroyed by an earthquake in 1773. After this disaster which destroyed an estimated 3,000 buildings, the “higher-ups” made the decision to move the capital to Guatemala City, which is 45 minutes away in the Valley of the Hermitage.

Today Antigua is a very popular place for Americans and Europeans who want to be immersed in the culture and learn to speak spanish. It has once again become a very popular place with its old ruins, brightly colored homes and world renown cuisine. If given the chance, I would try to eat and drink my way through this city one eclectic meal at a time! It is also home to what I would deem as the nicest McDonald’s in the world. With views of Agua Volcano from the huge courtyard, great service and a killer internet connection, it is a travelers dream and looks nothing like a traditional McD’s. 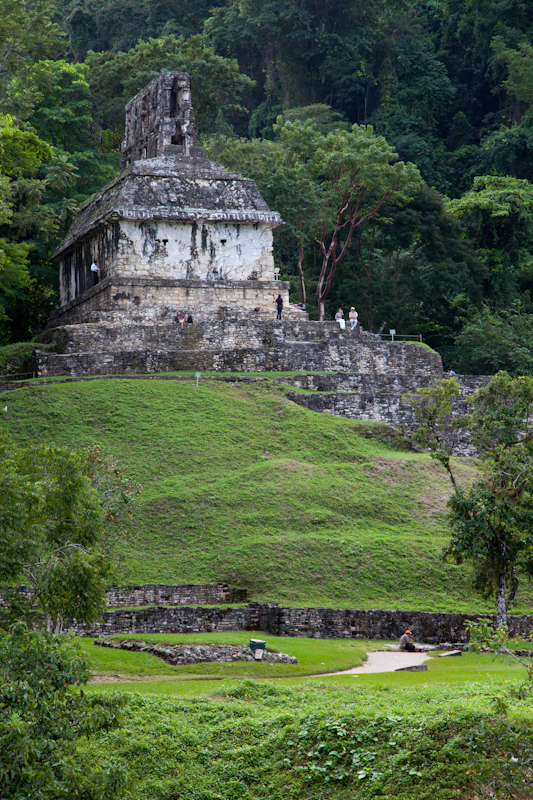 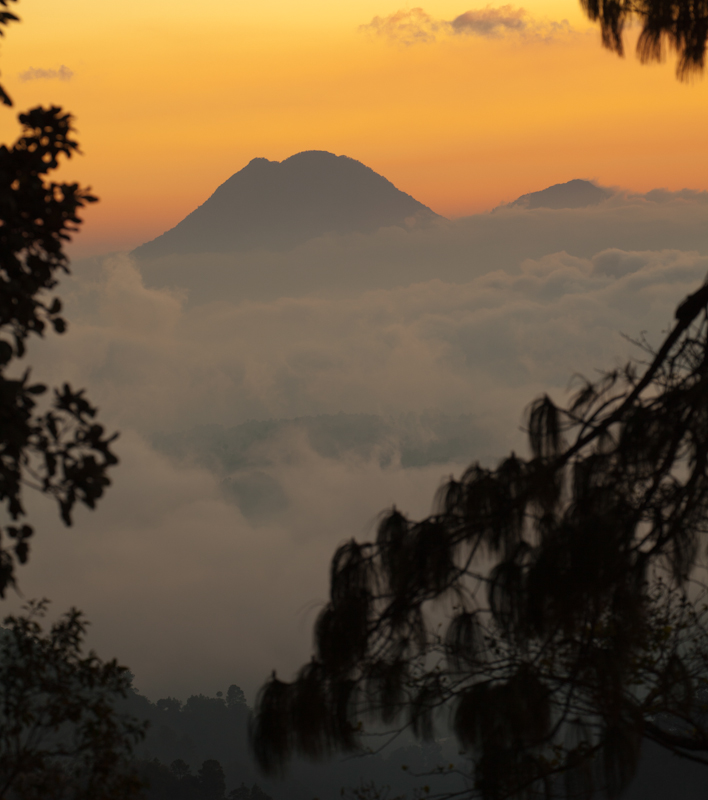 Antigua has three volcanos which lie just outside of the city with 12,325 ft. Agua Volcano to the south, 13,900 ft. Acatenango and the still active Fuego Volcanoes to the west. One morning as we had breakfast at Finca Columbia, a coffee plantation just outside of town proper, we observed Fuego do its thing. As we dined on Huevos Rancheros and drank freshly grown coffee from just meters away, we watched clouds of smoke pillar up from El Fuego’s core, an incredible experience to say the least!