The past few years have been exciting times for the overland community, with a broad range of new products and vehicles available to address our particular travel needs. While overland travel has been around since the first automobile, it has rarely garnered wide media and consumer interest. This is certainly changing with television programs like Top Gear conducting legitimate vehicle-based over trips and the Speed Channel featuring a prime-time television episode on Overlanding. A-list actors seem to enjoy the adventure as well, with popular programming like Long Way Round. This all comes together with the new Discovery Channel series: Driven to Extremes.

We believe the important aspect of this series is not only the prime-time and global distribution, but the fact that the expeditions are being led by Mac Mackenney, a prolific and experienced overland adventurer from the UK, a Royal Geographic Society fellow and generally good, authentic dude. While growth and wide media coverage might seem at odds with our interests, the development adds higher quality products, greater OEM attention for new vehicle models and more logistics and planning support. Certainly, there is the danger of overland travel becoming too popular, leading to overcrowded routes, etc., but that likelihood is really minimal. In general, people prefer to sit on the couch and watch someone else drive around the world, but a few will be inspired to seek an adventure of their own, and that is a good thing.

Editor’s Note: As an interesting coincidence, I was traveling in Siberia around the same time as the Driven to Extremes project and we drove to the same remote (and cold) location along the Road of Bones. Here are the Expeditions 7 vehicles in Tomtor, along the old summer Road of Bones at the Pole of Cold. 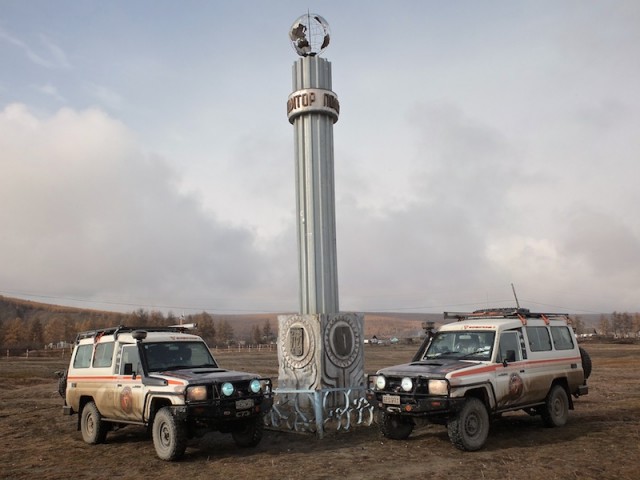 Expeditions 7, along the Road of Bones

Prepare for the ultimate Hollywood road movie, as A-list actors, Tom Hardy, Henry Cavill and Adrien Brody, join forces with Formula 1 star Mika Salo and World Superbike champion Neil Hodgson, to take on the most extreme roads in the world in exciting new series Driven to Extremes. Each episode follows a celebrity pair as they take on some of the toughest terrain on the planet, at the harshest time of the year. From keeping the car running in temperatures of -50ᵒC on Russia’s notorious Road of Bones to navigating through the depths of the Malaysian jungle in the middle of the monsoon season, accompany these high-profile petrol heads as they push themselves and their car, to the limit.