It’s a bright morning in Bangkok, and a beam of light reflects in just such a way from the rooftop of the drug factory across the way as to awaken me from my bear-like hibernation. We’ve been living in this apartment just down the street from the Bang Chak Skytrain station for a month, and we’ve finally accomplished everything that we wanted to accomplish here; Nacho has a new engine, we’ve published our book, we’ve made lots of friends, and we’ve begun to see Bangkok from residents’ eyes.

The previous evening after a dinner on the Arab Soi we wandered the back alleys past shops selling spices and fabric, past an Iraqi restaurant and rows of turban-clad men loitering around shisha pipes. We reached Sukhumvit Street and crossed over a pedestrian bridge with a view of the city. We stood there for a while watching people and cars go by before the backdrop of the city that now felt so familiar. We could imagine living long term in Bangkok, despite the fact that we’re small town mountain-loving people. But we have the itch to move on. We still have a long way to drive. 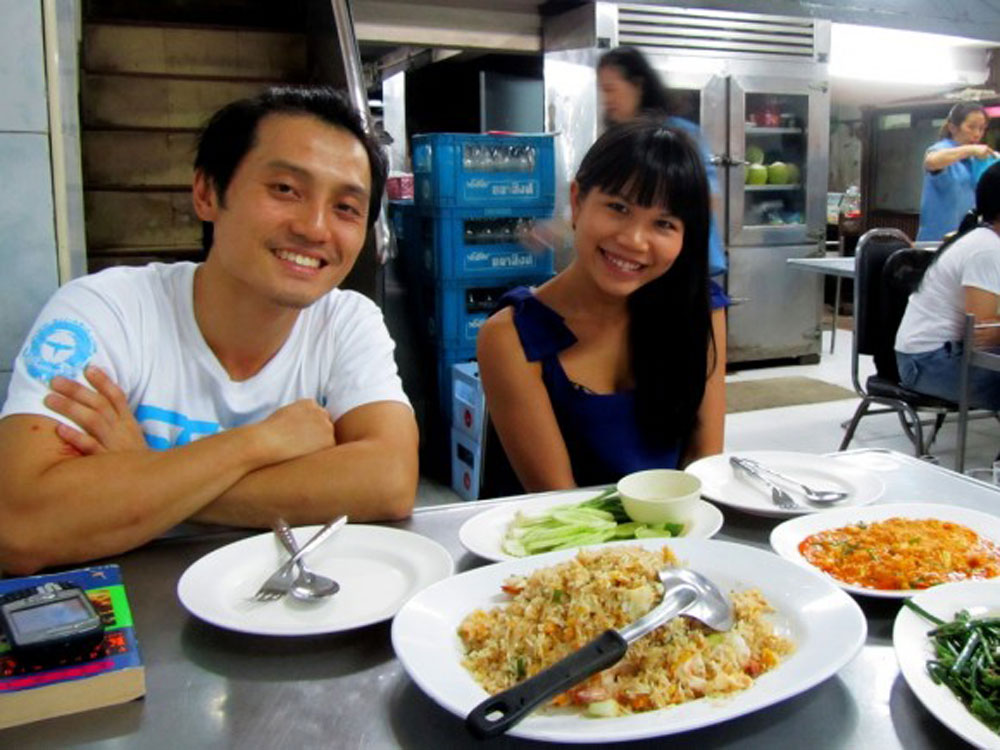 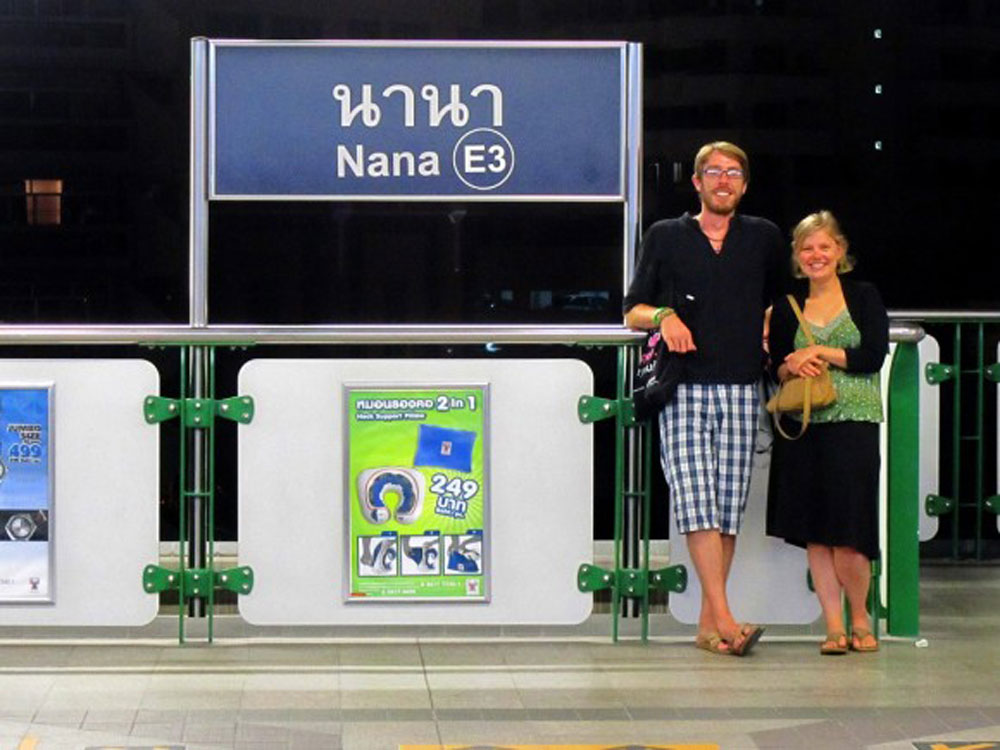 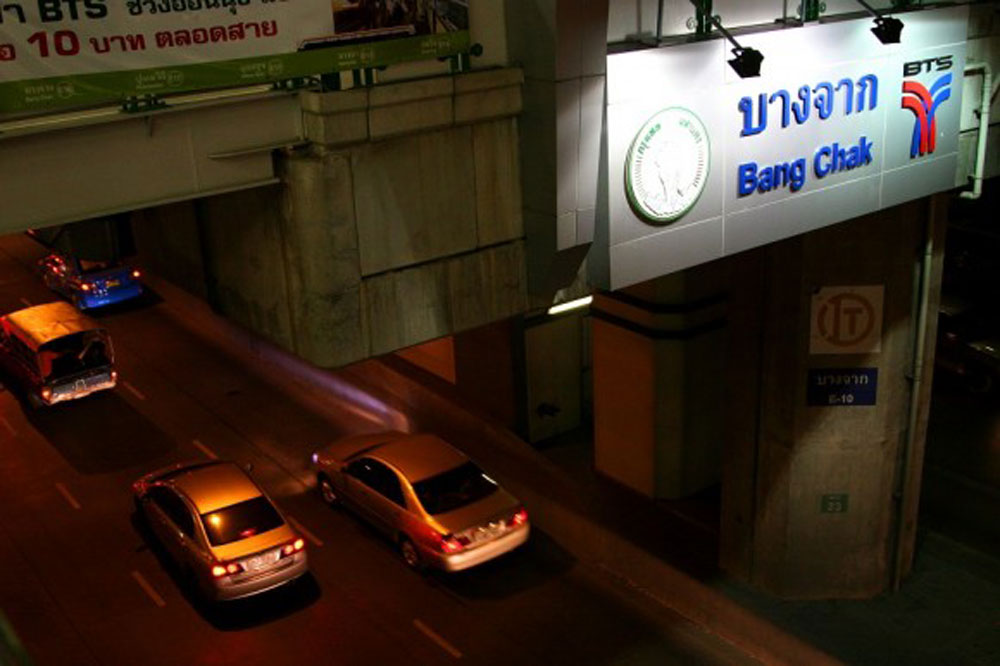 We had wanted to drive to India from Southeast Asia, but the task has proven impossible. To get there, we would have to drive through either China or Burma. Burma is a no-go; the government has made moves to open up to the outside world, but the borders remain closed at the time of our arrival. China is also a bust, as the Chinese government requests $8,500 in fees for us to cross from Laos to Nepal. With no overland options available, we’ve resorted to our favorite activity: vehicle shipping.

Our apartment is situated only five minutes from Bangkok Port, but we’ve just received word from our shipping agent that container loading has been moved to Laem Chabang Port, 100 kilometers away. Helpful as always, our agents at Hellmann Logistics offer to drive out to the port with us for container loading, and the give us a ride back to our apartment—a full day of work and half a tank of gas, and at no charge. But when our Thai friend Gak catches word of this, he simply won’t have it. If anyone is to accompany us to the port, it will be him! We let Hellmann off the hook and follow Gak, in his 1960′s VW bus, to Laem Chabang. 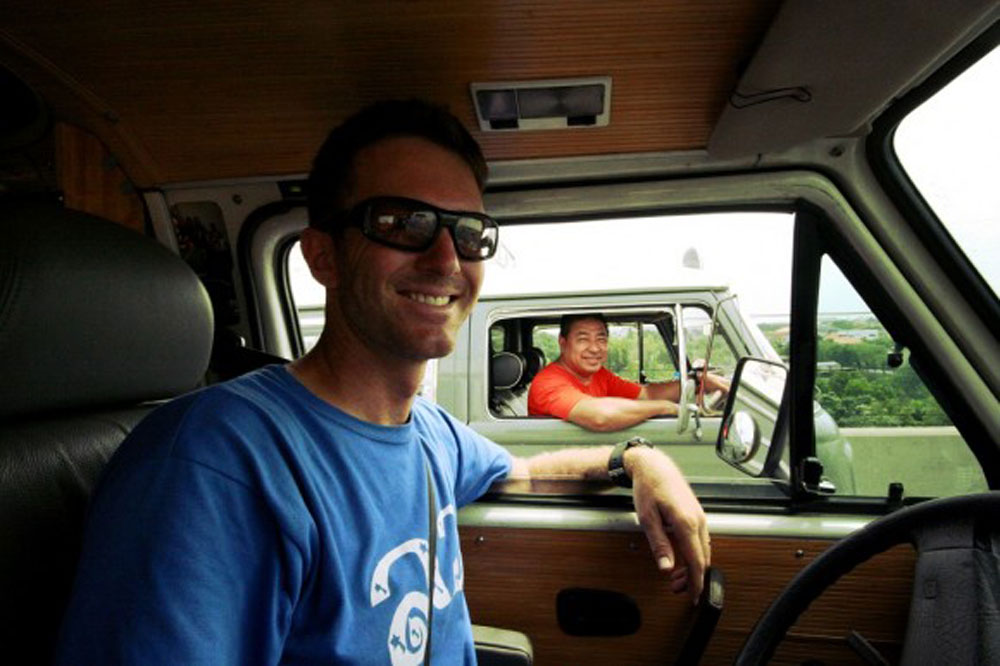 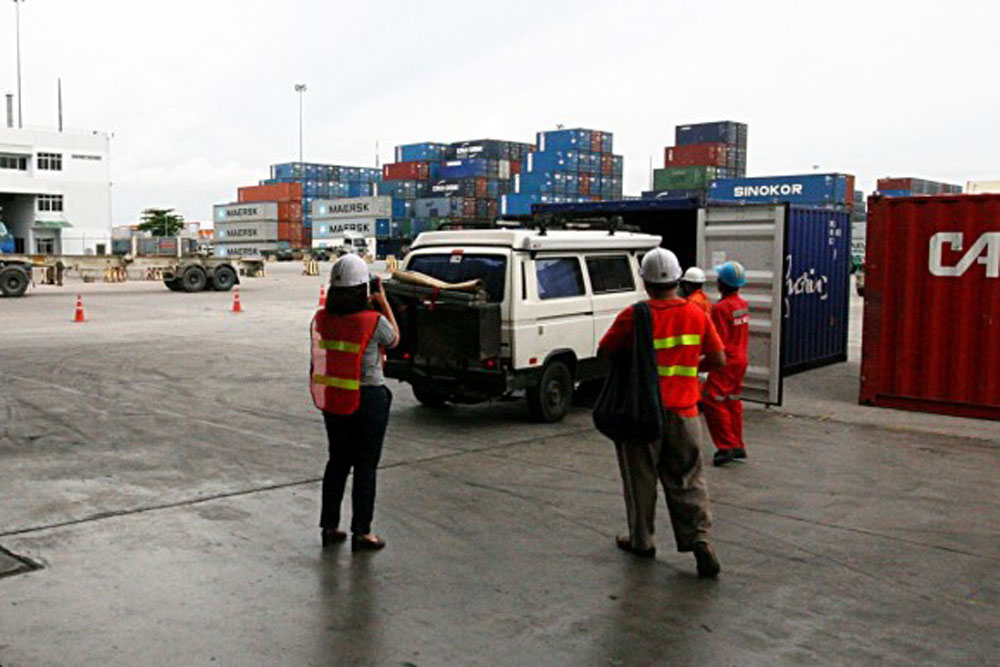 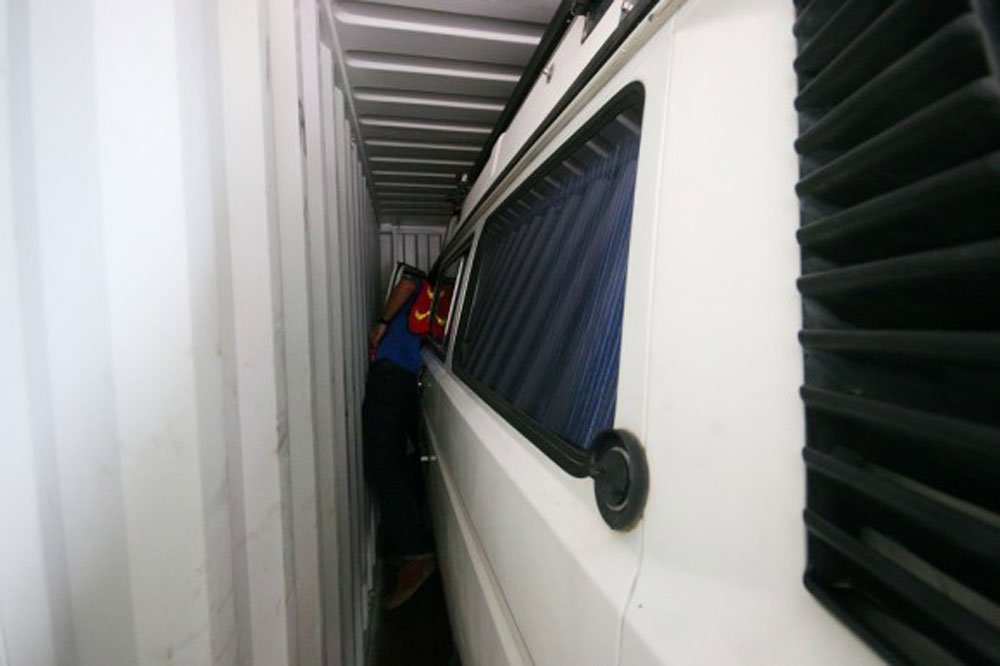 When we arrive in Laem Chabang, we’re met for lunch by more Hellmann agents, and then we all roll out to the port together. We stop shortly at the port entry gate while our agent goes inside to get clearance, and then we all hop in Nacho and drive into the port. When we get there the container is waiting and open, and I slowly, ceremoniously drive Nacho inside. I would say that it seems like only yesterday that we drove Nacho out of the container in Malaysia, but I’d be lying. It seems like an eternity ago. We’ve learned a lot since arriving in Asia, and this feels more like a capstone than the next step in a journey.

Our shipping agents feel it too. We’ve only just met, but they get caught up in it just like we do, snapping photos of us, Nacho, and each other for posterity. It’s a far cry from our first shipping experience. And did we ever mention how much we love Thai people? 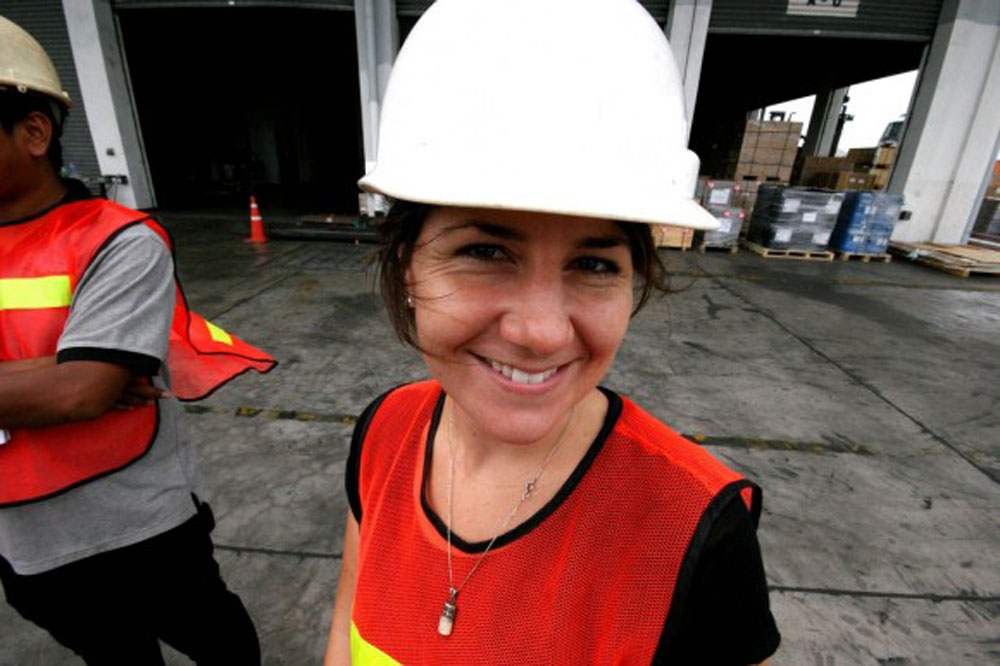 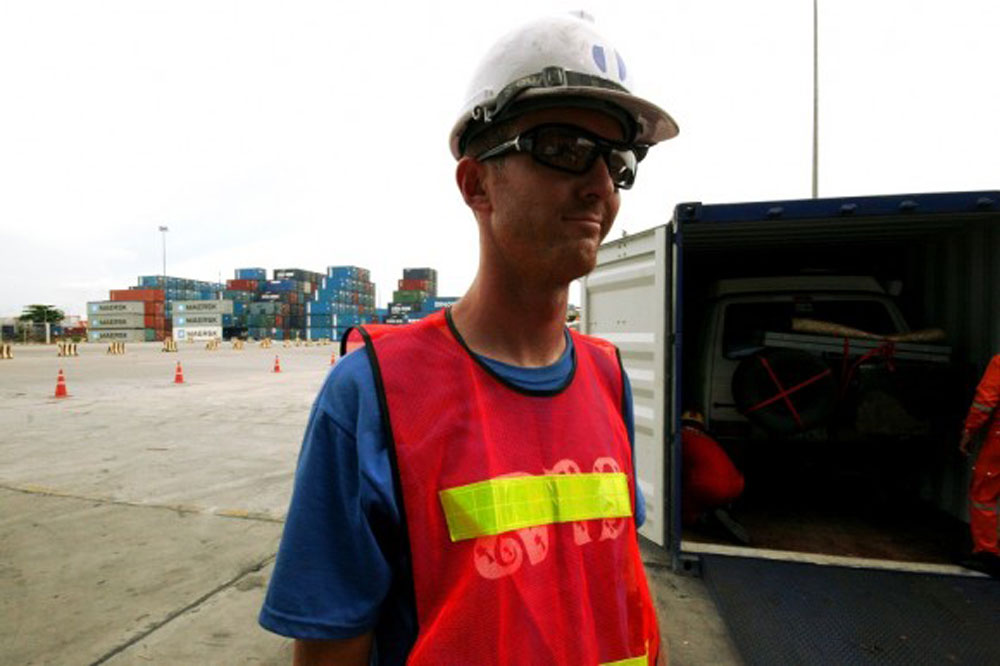 We finish bidding ado to Nacho and then load up in Gak’s VW to head back to Bangkok. Gak has led us to believe that he is a better candidate than our shipping agent to bring us back to the city, and this is his time to shine. We cruise to the gas station and buy a couple of Cokes. A good start. It’s late in the afternoon when we turn off of the main highway and head toward the ocean.

We wind through small beachside communities and pull off at an overlook above Chon Buri where we try to hide our intense fear of the monkeys that lurk about, and then we’re off again, toward the fishing wharves on the outskirts of Bangkok city. We find our way onto one of the docks and drive the bus out to the end where workers shuck clams. We’re welcomed by the happy workers, who tell us they’re from Burma. Several people collect the clam meat, while others place the shells in bags to be sold and ground down into bulk raw material. 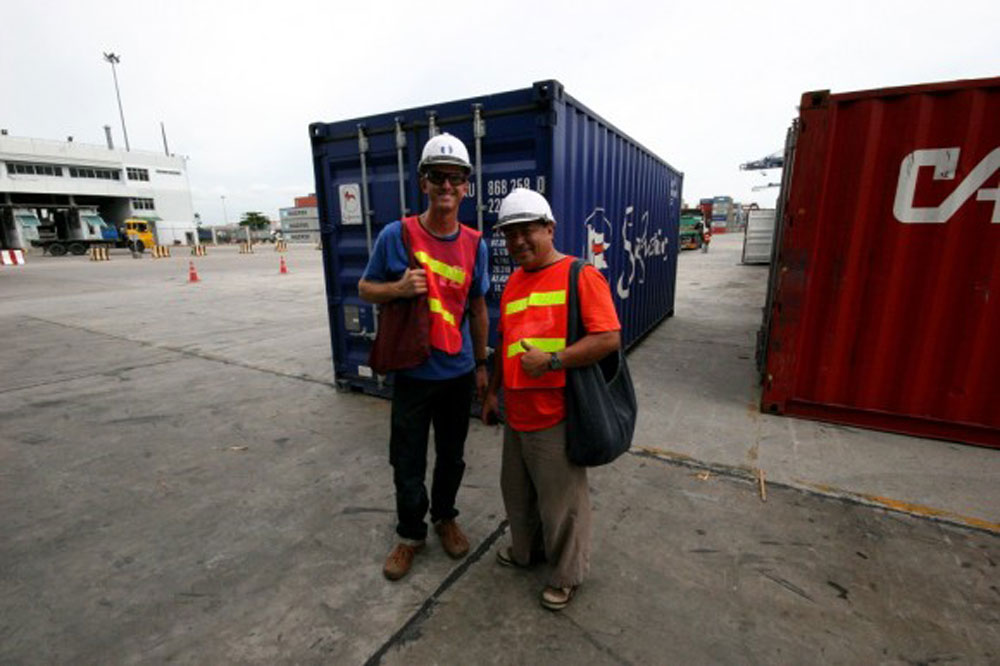 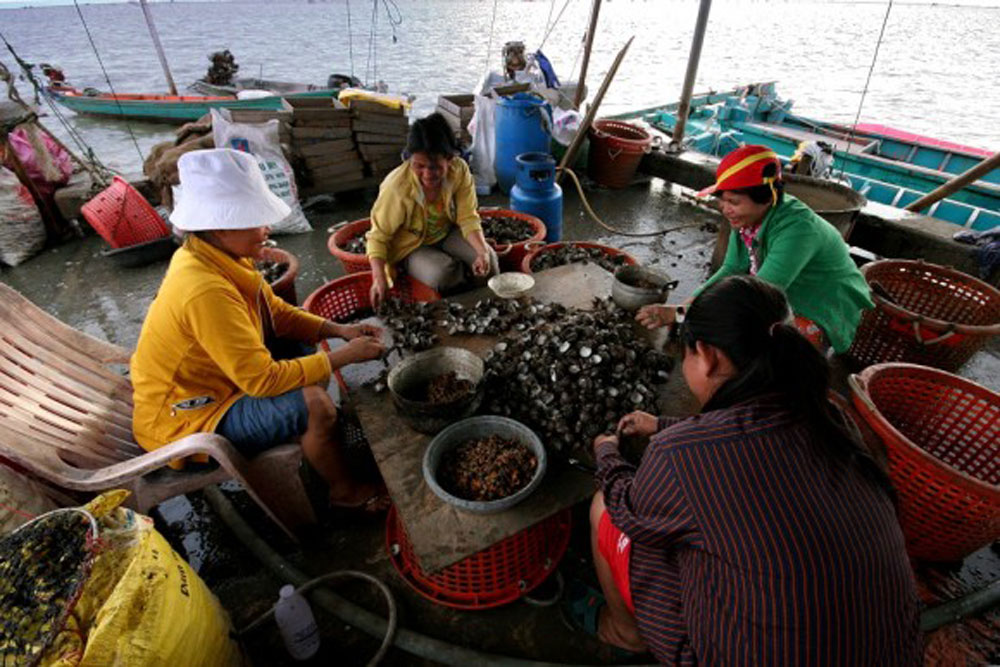 The work looks terribly difficult, and the workers receive very little compensation for their hard work. During our time in Southeast Asia we’ve come to meet many Burmese laborers; immigrants from Burma typically perform the low-pay manual labor and servant work for the surrounding countries of greater wealth, much in the way of some Latin-American immigrants in the United States. The difference here is the pay scale and the often extreme working conditions that they must endure. Still, they remain happy and smiling, and they send much of their meager income home to support their families.

After forty five minutes of hanging out with the Burmese workers, the sun begins to set and they call it a day. Despite the workers neither speaking Thai nor English, we somehow manage to have a lengthy conversation of charades and guesswork, and come away feeling that they’re a happy group of people. 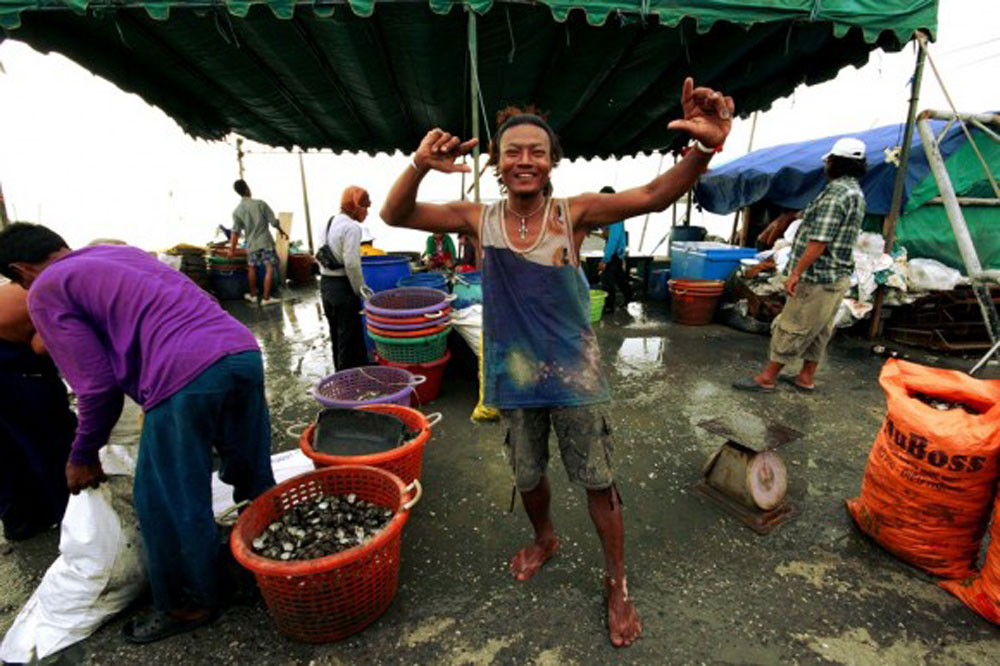 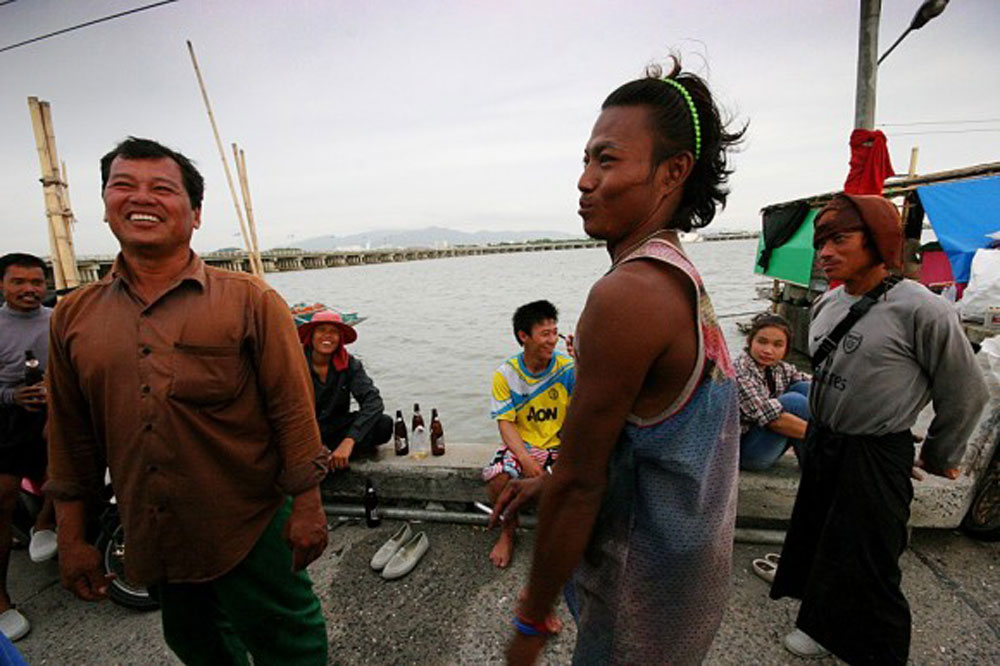 With Nacho gone, we’re on our own. The ship will take 16 days to go from Bangkok to Chennai, stopping once in Singapore. We decide to spend one more week in Bangkok, and then move on to Chennai to get our affairs in order before Nacho arrives. Task at hand: one week to be as carefree as possible.

As a great stroke of good luck and coincidence, our friends Ben and Chelsea just so happen to be passing through Bangkok for a couple of days as a part of their vacation. I met Ben when he was a senior university student when he came to work as my engineering intern at Gore. We became good friends with both Ben and his wife Chelsea, but haven’t seen them since they left Flagstaff.

For two days we re-explore Bangkok’s tourist areas with our American friends: boat taxi rides up and down the river to visit temples, another trip to the Grand Palace, strolling Khao San Road and Old Bangkok, and some good meals at some of our favorite restaurants.

After having been on the road for so long, we’ve forgotten what it’s like to be on a time-limited vacation, and sometimes feel that we make terrible tour guides. We usually just go about our life and strange and interesting things just seem to happen. But when people come to visit, as in the case of my mom, or Ben and Chelsea, we have to figure out fun things to do. And when we can’t remember what normal people consider to be fun, it makes our job prone to failure. In the end, though, I think we have succeeded in entertaining our friends. 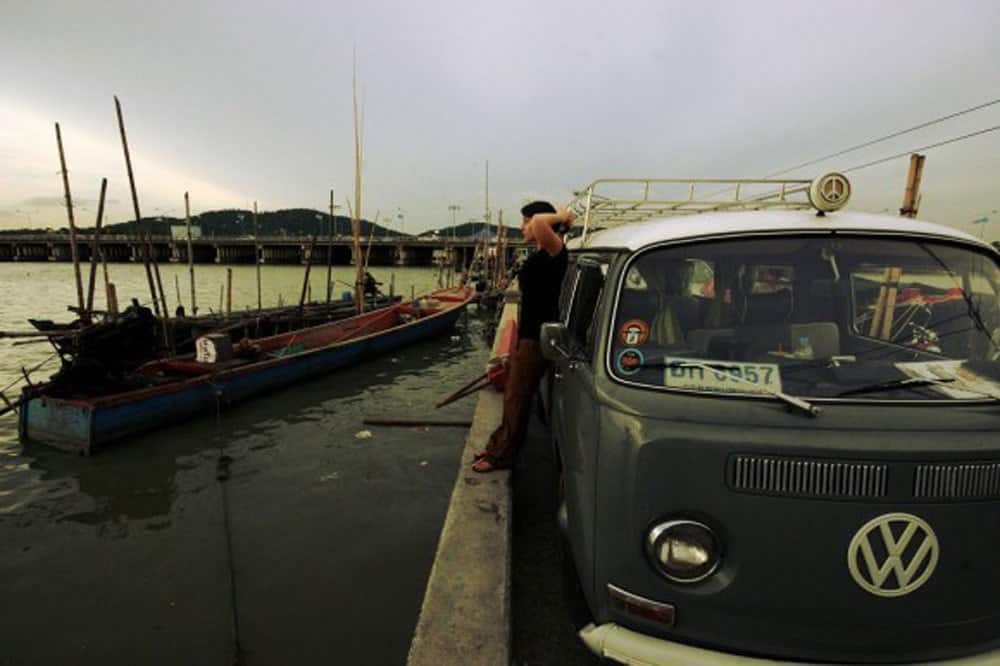 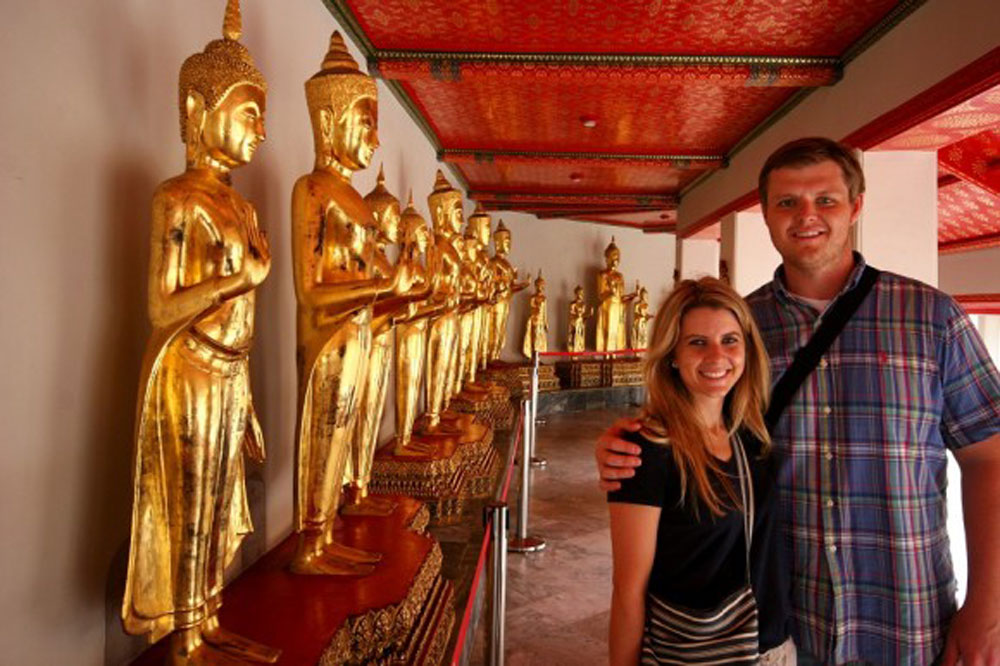 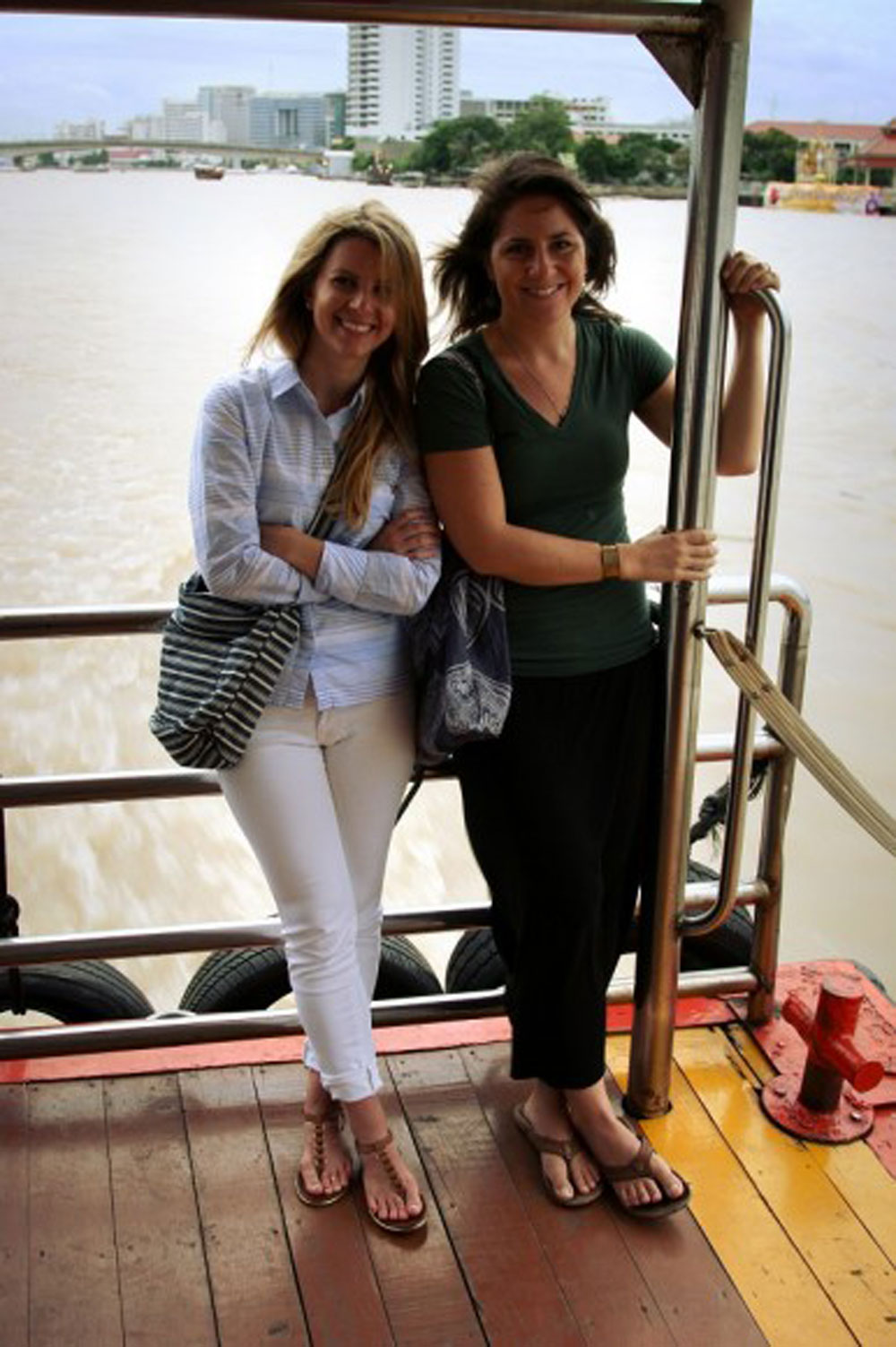 Ben and Chelsea’s last night in Bangkok also happens to be our last, and we know it has to be special. But what to do? Sheena and I are terrible at planning fun things, so we do the only thing that we can think of: we call our trusty friends Pat and Gak for guidance. They’ll have an idea!

Gak and Pat agree that the best thing would be for all of us to meet for one final dinner at Bangkok’s best hole-in-the-wall Pad Thai restaurant, which also happens to have Bangkok’s best fresh-squeezed orange juice. Aha! Why didn’t I think of that? I remind myself that I lack the ability to proactively plan fun things.

We take a cab to the general vicinity of the restaurant with Ben and Chelsea, and get out at a very large roundabout. I call Gak to see where we should meet, and he tells me he’ll call right back. In the interim, my phone runs out of credit and so Gak never calls back. Meanwhile we find ourselves sitting in the middle of the roundabout watching a large rat eat a small pile of rice. It starts to rain. We feel the evening slipping away, free of fun. This won’t do! I think to myself. In a moment of clarity I decide to top up my phone, after which everything falls into place, and we find ourselves riding in the back of Gak’s bus to the Pad Thai restaurant.

It turns out that Pat and Gak are correct that this place has the best orange juice in all of Thailand. The Pad Thai is also good, and comes wrapped in a little package of fried egg. Nice touch. It feels good to be together with all of these people. After all of these months in Asia, Pat and Gak have become our family, and it’s tough to leave them behind. Pat keeps us laughing with his quirky explanations of Thai social antics. He explains that in Thailand it’s not considered rude to tell someone that they look fat.

“Why would it be strange?” he says, “They already know they’re fat.”

“Yes, but aren’t there Thai people who are trying to shed some pounds, who might be self-conscious about their weight?”

“Of course there are people who want to lose weight, but they still know they’re fat. It’s normal!”

Pat then goes on to tell Gak that he’s fat.

Gak smiles and laughs. It would seem implausible that the idea of being self-conscious were so foreign to Thais, were it not for other conversations we’d had with our expat friends in Bangkok that verified this. We all have a good laugh and feel a little insensitive and politically incorrect. 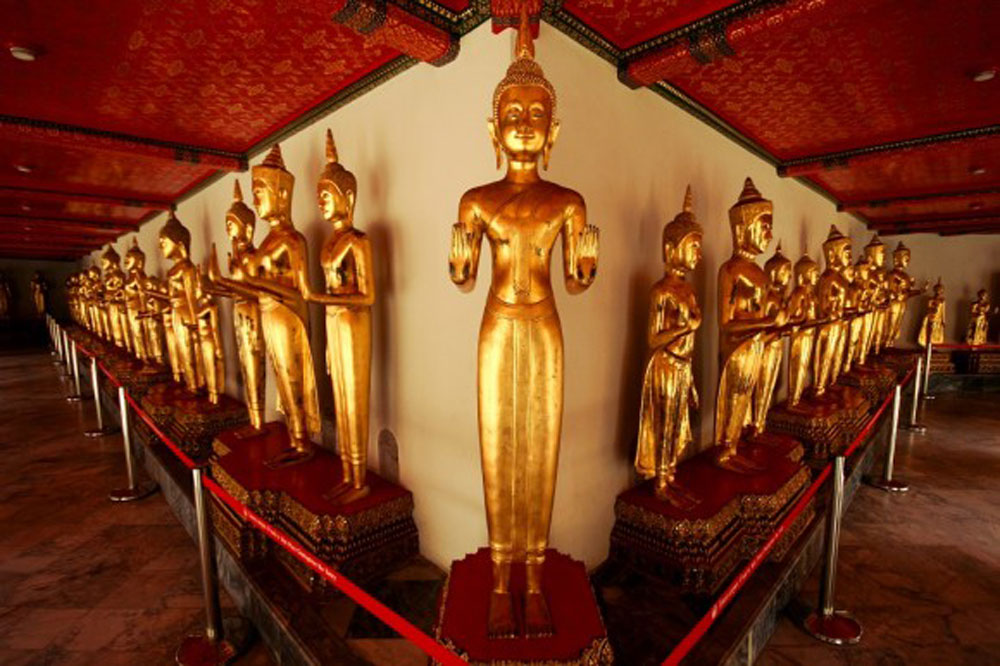 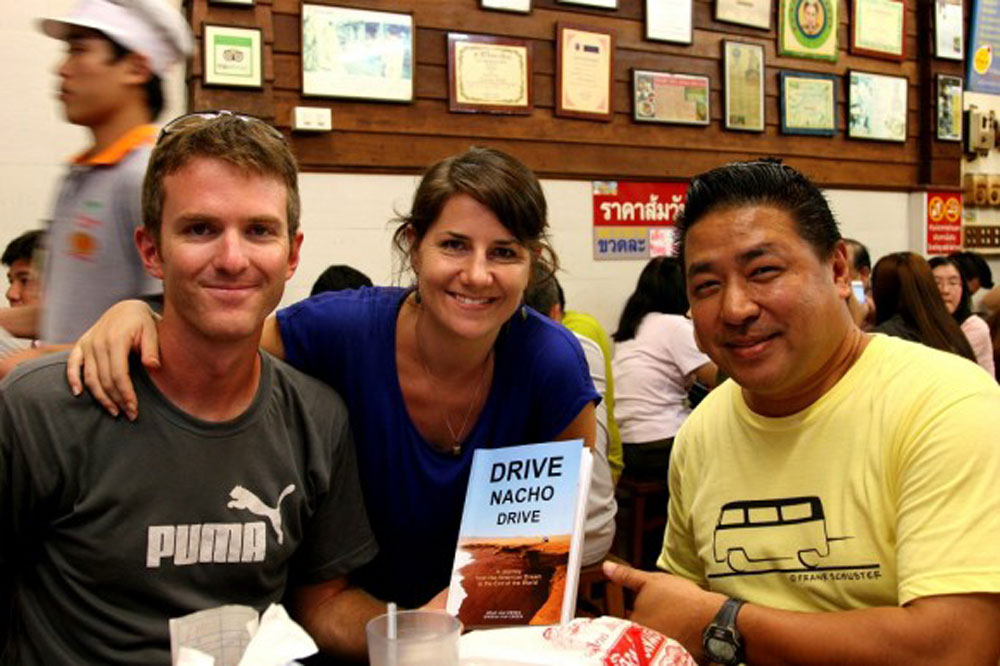 At the end of dinner, we ask Pat to read the note he’s made in our book. His family runs a publishing business, and he has run off a copy of Drive Nacho Drive for us to keep in Nacho’s onboard library. We had asked him to write something for us on our dedications page. He had started writing in English, but then switched to Thai script in order to fully express himself. “You can read it after you learn to speak Thai,” he says, and then reads it aloud. His words are the distillation of all of the kindness and friendship we’ve come to know in our group of Thai friends. We’ll keep it forever so we can always remember our friends.

Too Small or Too Expensive? The Evolution of Off-Road 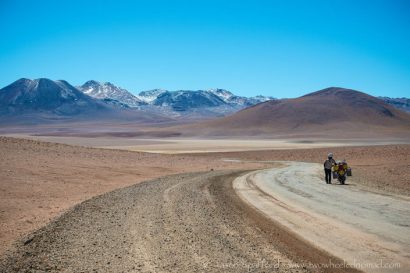 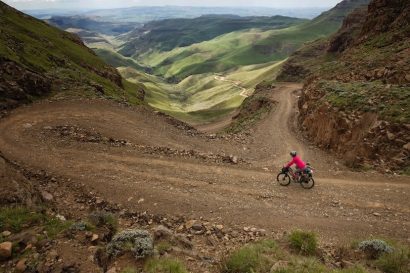 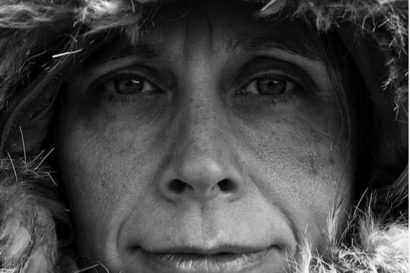