When I first fell in love with mountain biking I was living in San Francisco. Before too long I found myself spending more and more time driving outside of the city in search of new trails. The drive to ride time ratio was becoming a problem, not to mention my bike was crammed in the back seat of my 1991 Nissan Maxima. I knew then that I had to find the perfect vehicle for camping and hauling my beloved bike and gear, and that’s where it all started. 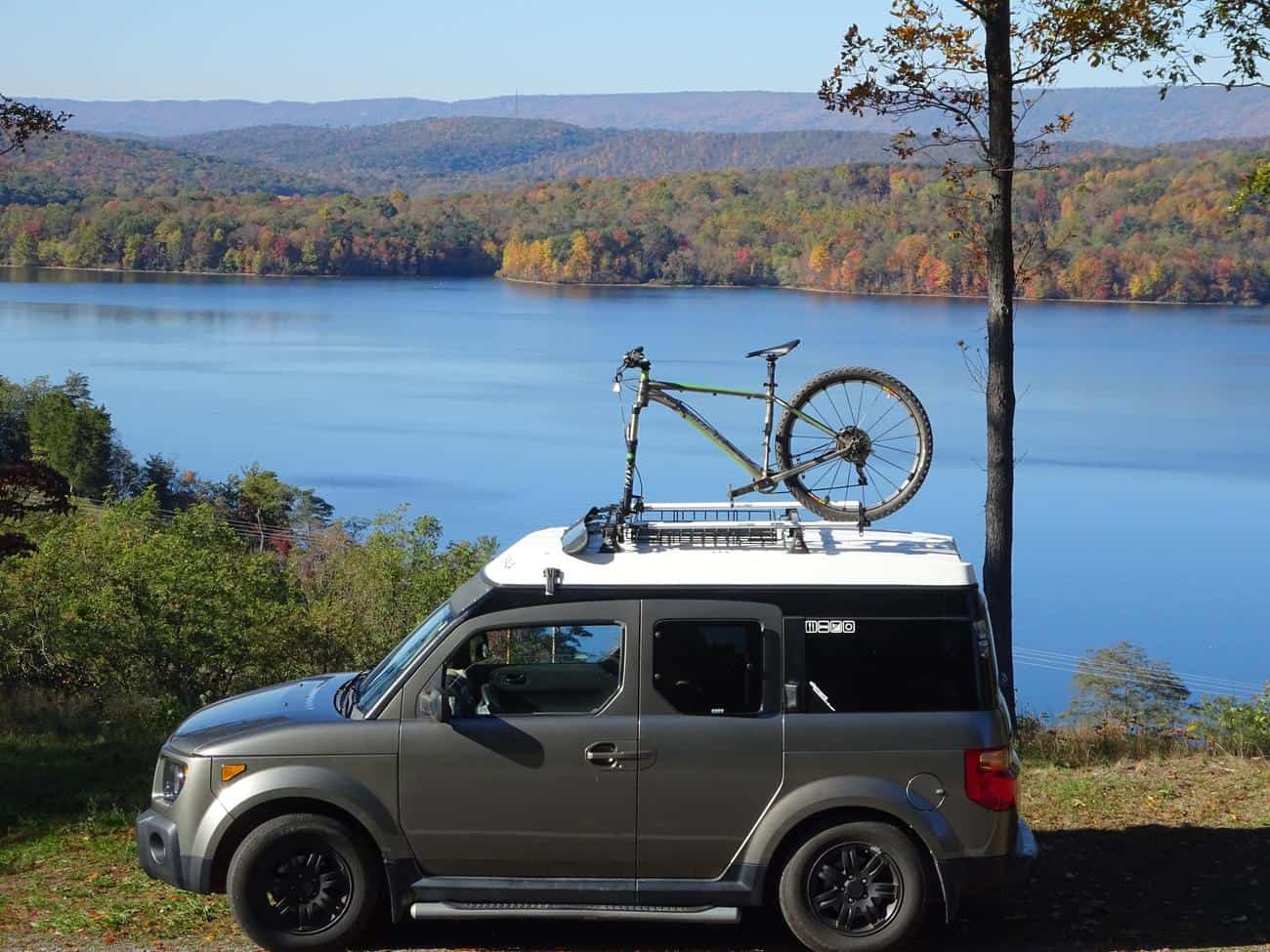 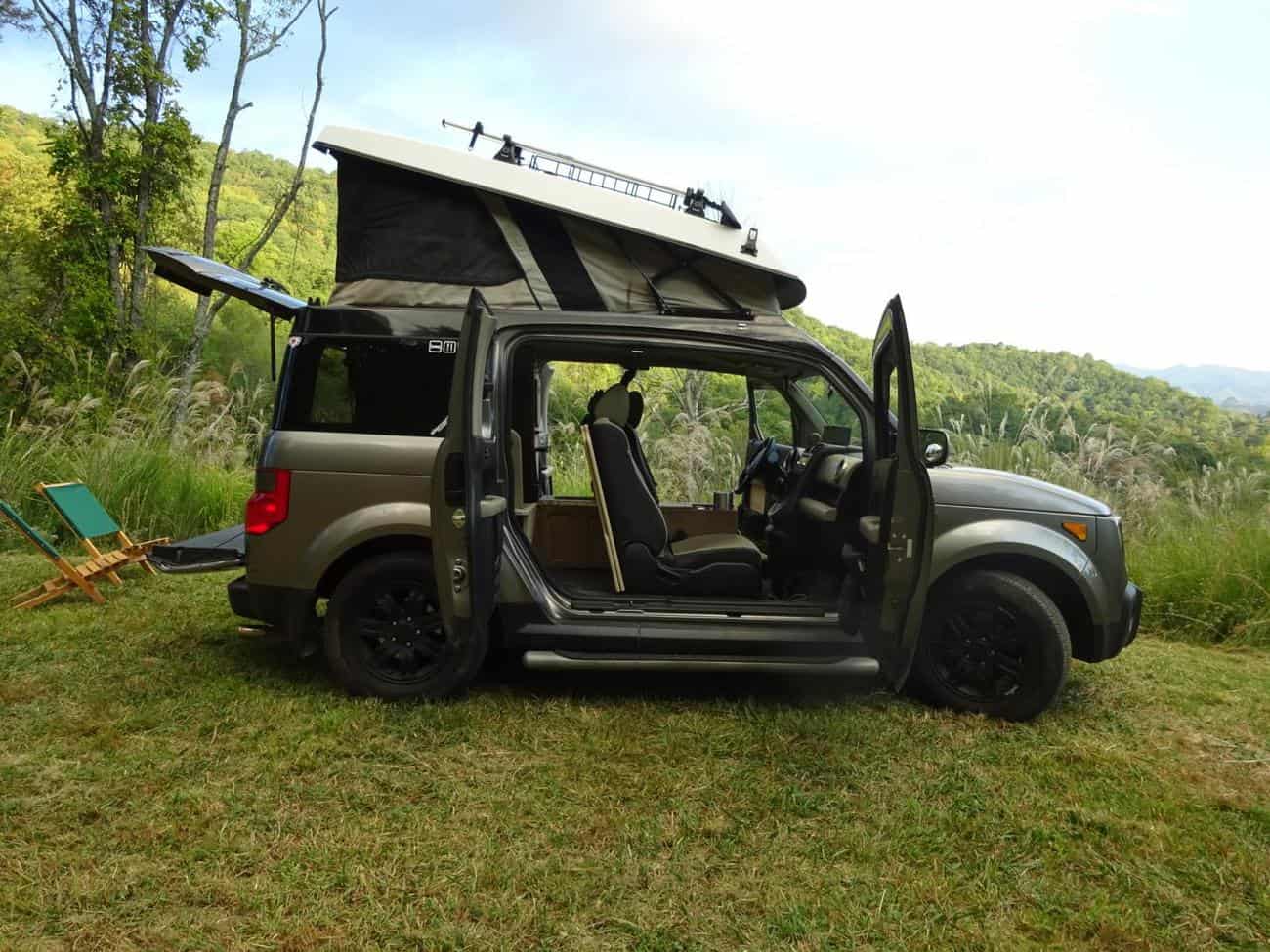 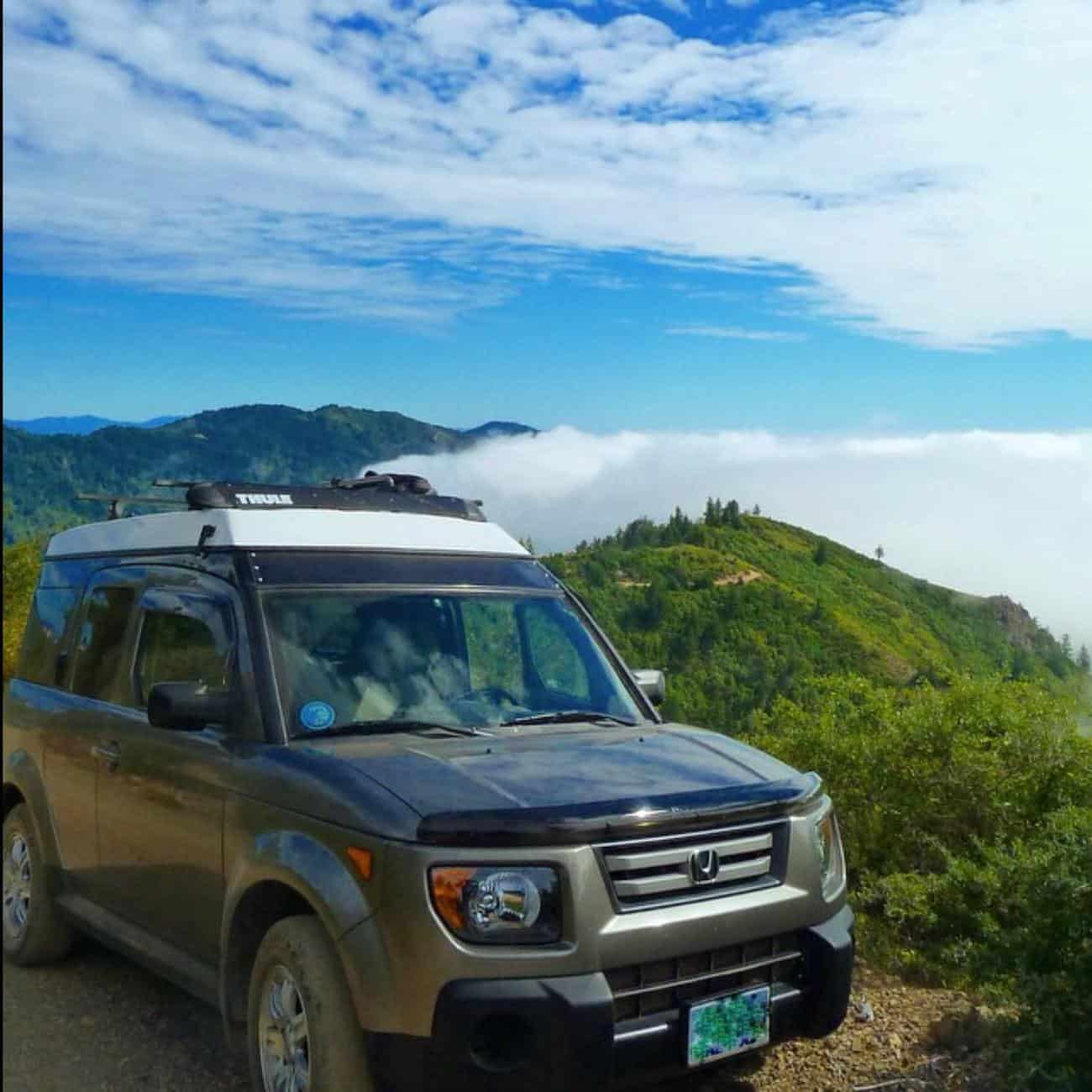 Like so many others, I was really taken with the classic VW Vanagon, so I began my search there. This was a long and disappointing process, as the vans I saw were either: 1. consistently unreliable 2. incapable of off road exploration, or 3. waaaaay beyond my price range if they passed #’s 1&2. One day, while combing the internet for the perfect ride, I ran into an unfamiliar pop-top camper. It turned out to be a Honda Element with an Ecamper top built by Ursa Minor Vehicles and it was love at first sight. 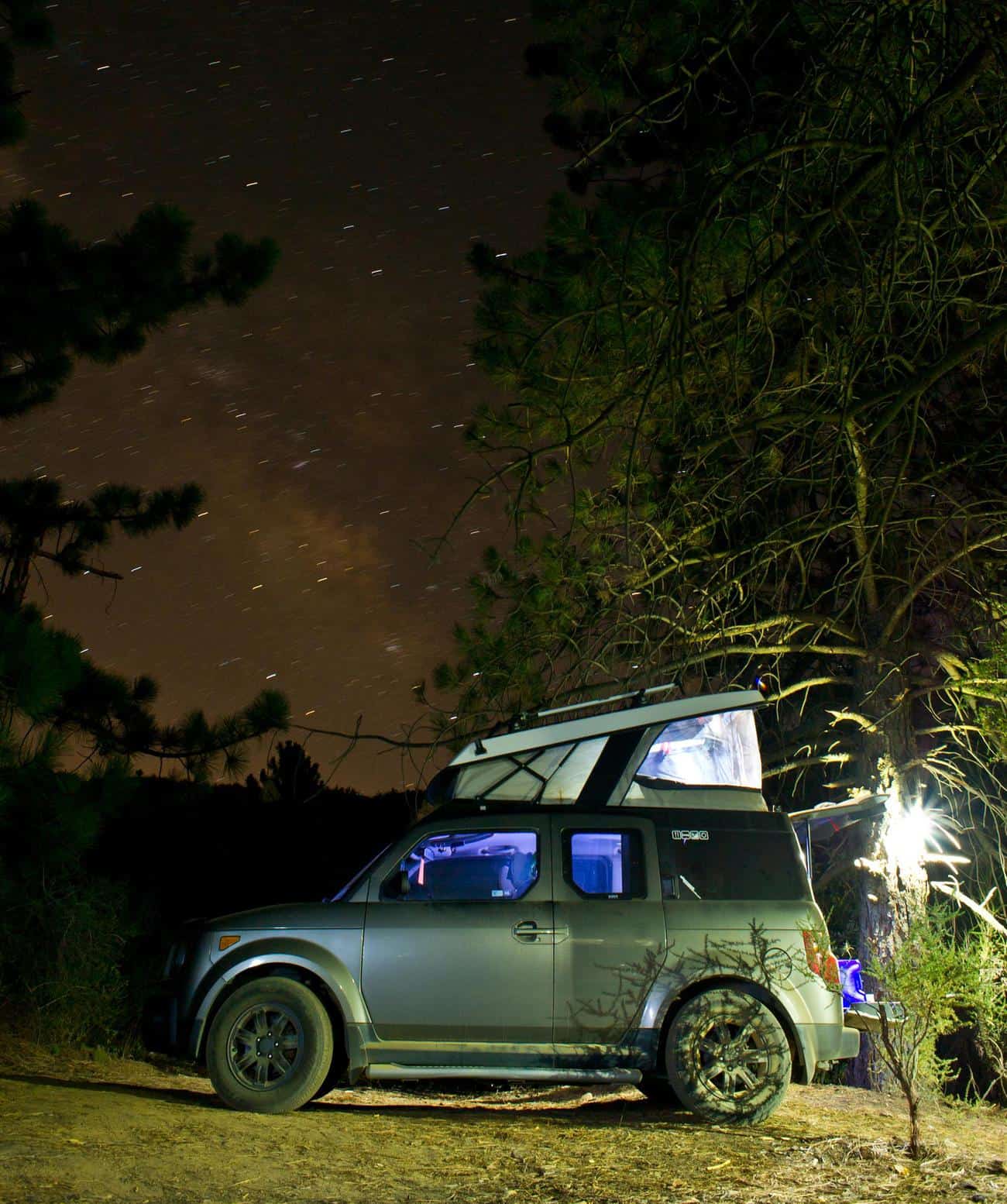 I had never considered the sort of dopey Element before, but once I took a look inside I was sold on this tiny van barely longer than a Mazda Miata. All it’s boxy lack of styling was put to impressive use inside, and the small size made perfect sense for city parking. Plus it’s a Honda, which gave me far better odds of reliability than a VW. Two months later I had purchased my perfect model, and six months after that I had my Ecamper pop top installed in San Diego. After that- creating the rest of my dream camper was up to me. 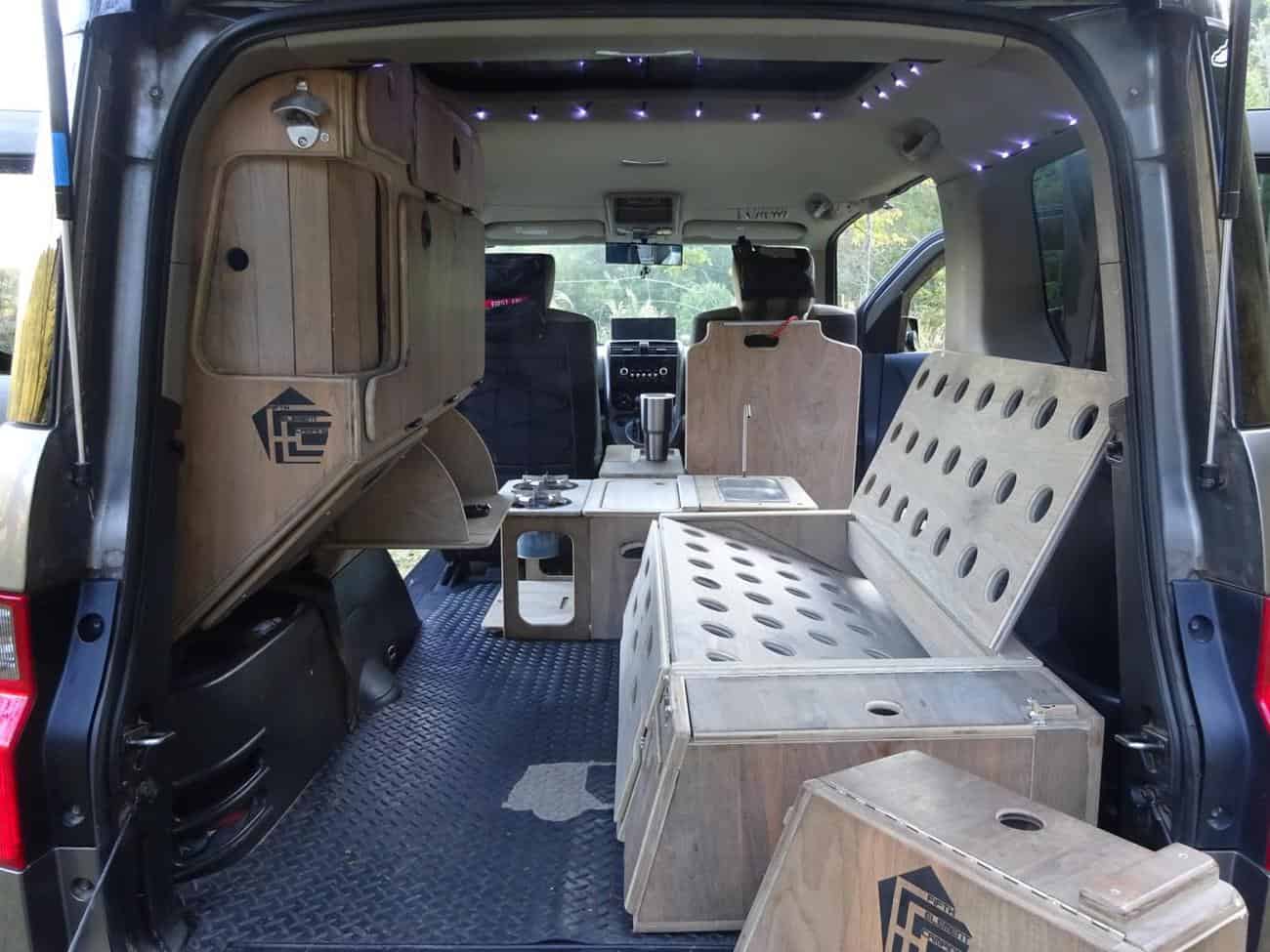 I went to work re-imagining the empty rear cargo area to haul my camping gear, my bike and all sorts of other things, in a way that kept everything organized during travel in the unruly empty space. I needed something that was easy to take in and out of the car and light weight enough that one person could do it alone. It also needed to provide a bunch of storage, but fold in a way that accommodated my mountain bike 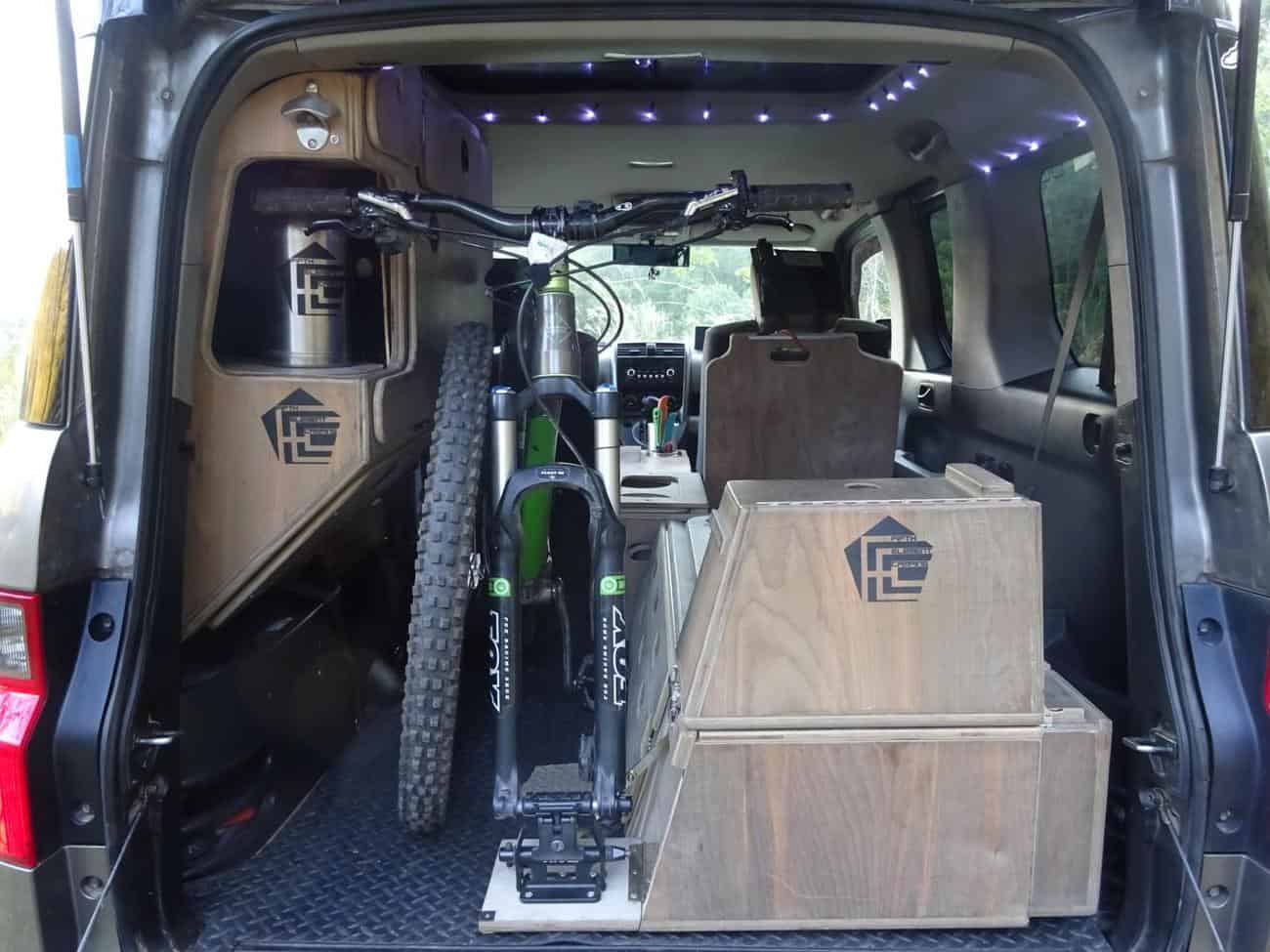 Almost two years after first beginning this project on the living room coffee table of my cramped San Francisco apartment, I relocated to a special chunk of land outside of Santa Barbara where I had access to a fully stocked wood shop and 40 acres of gorgeous ocean front desert for trail building. It was a  Mountain bikers paradise. But, the way life works, shortly thereafter a bike crash left me with a broken wrist, unable to ride or even to drive the windy mountain road to town. So I took to the power tools occupy my time and the microcamper project ramped into high gear. 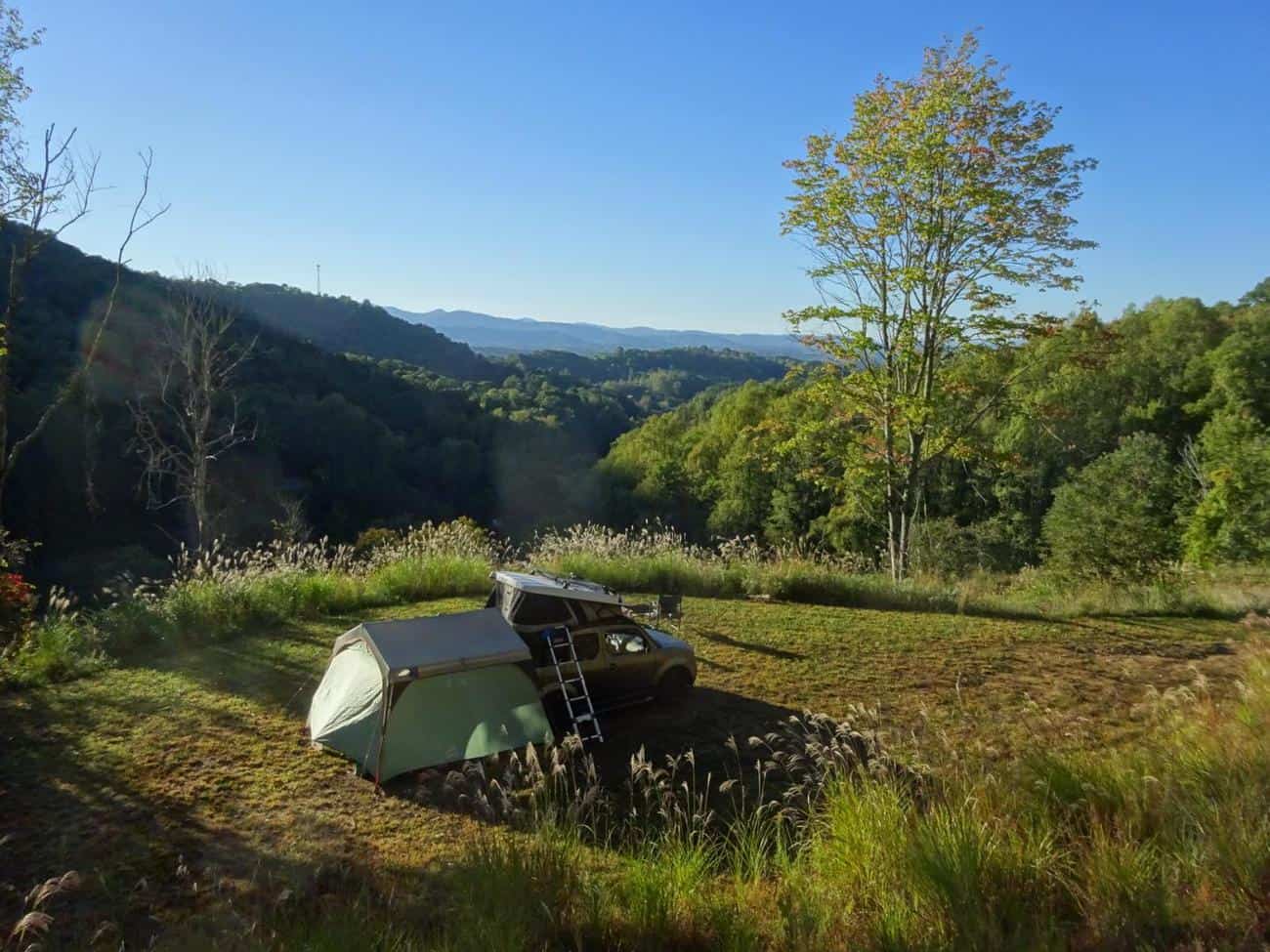 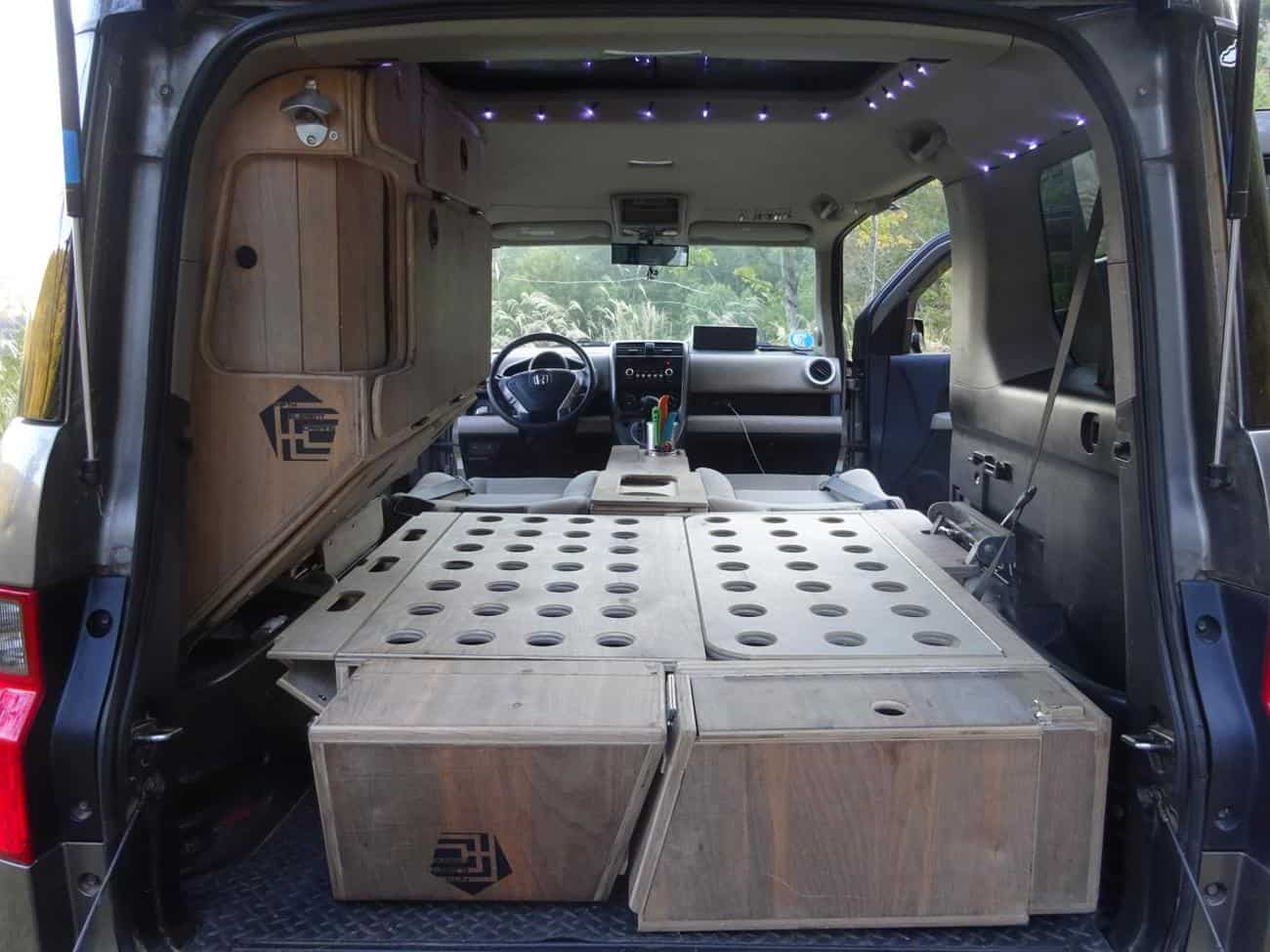 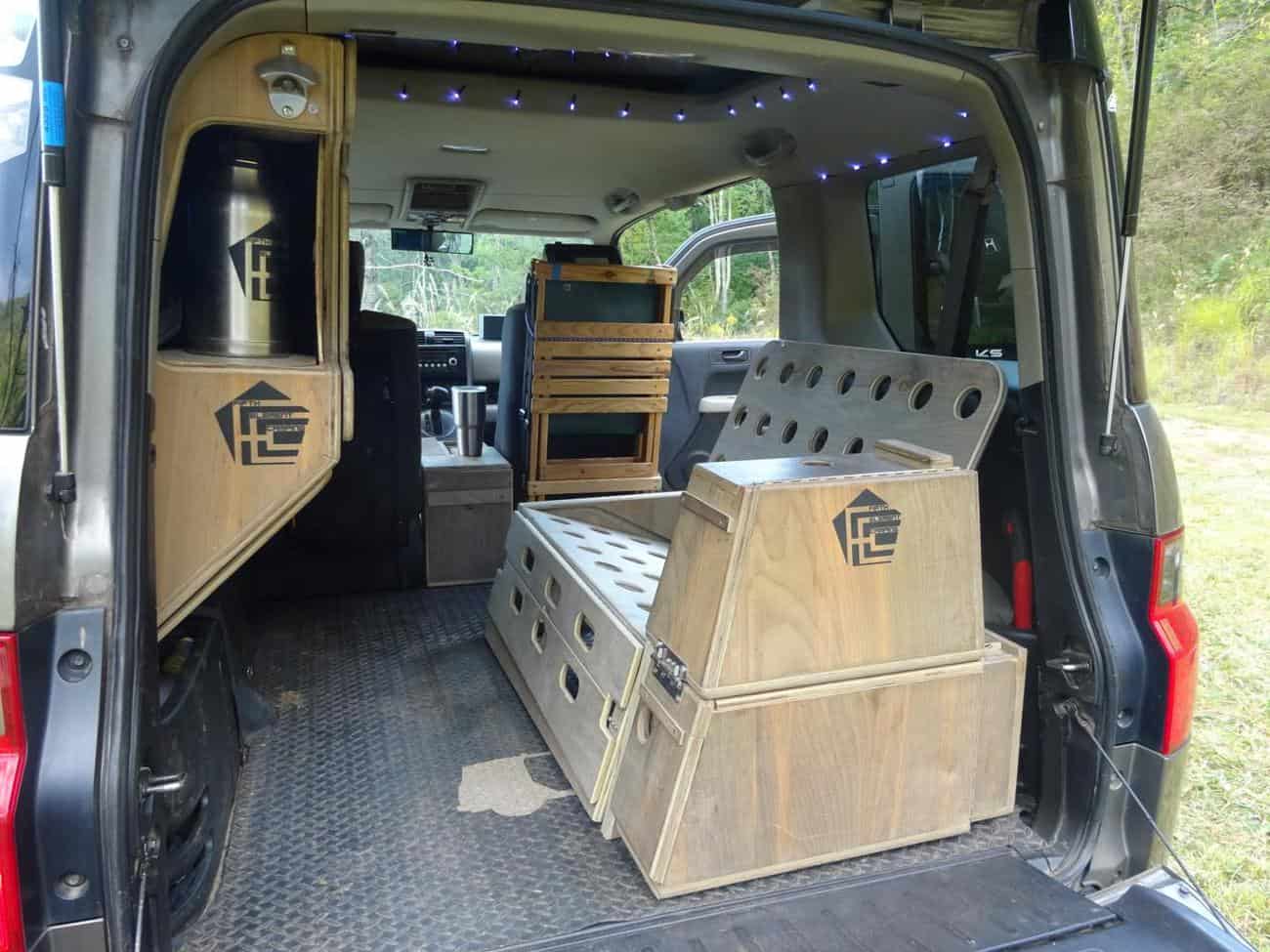 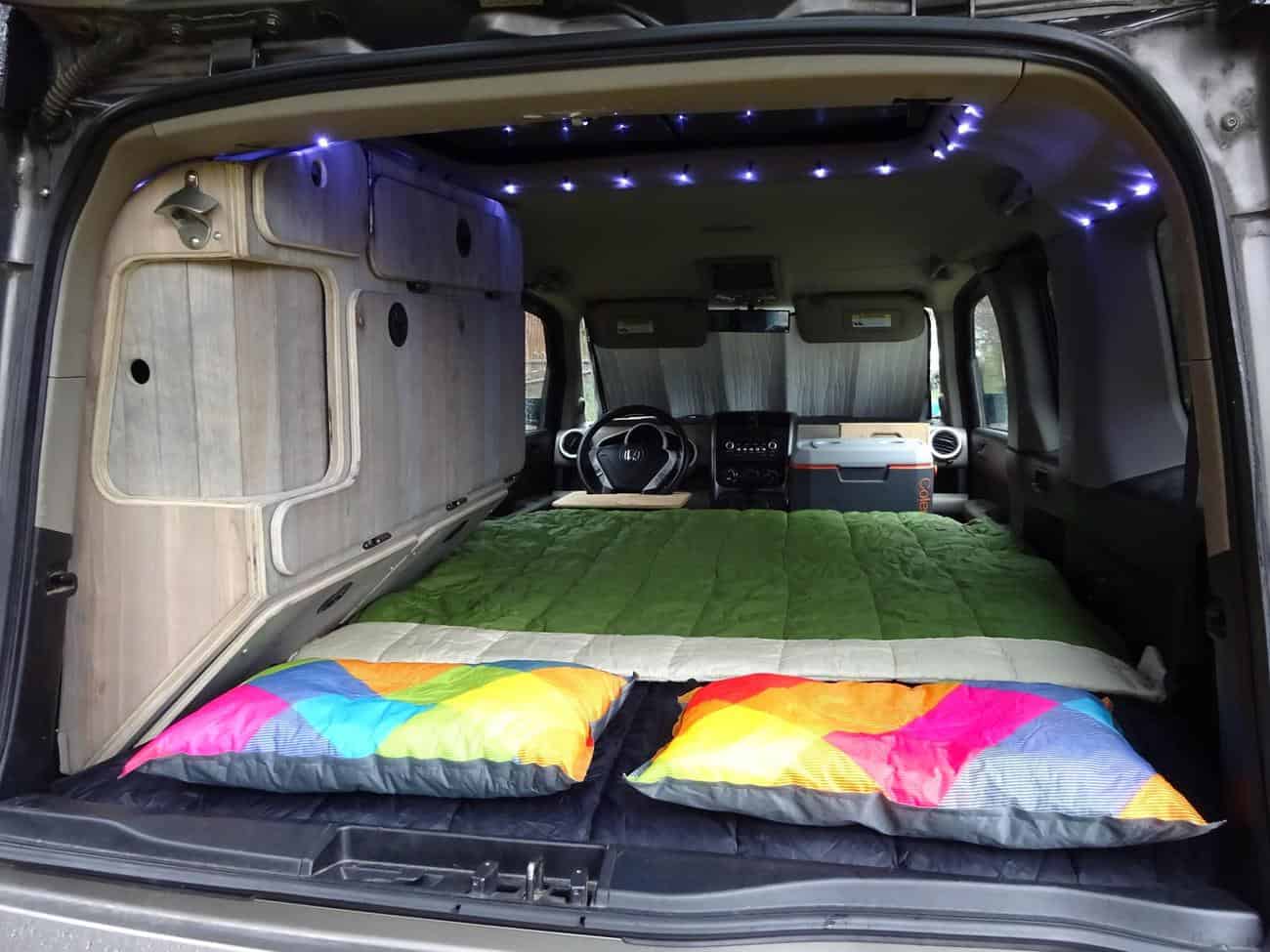 With my cast the progress was rather arduous, but after several weeks I ended up with a simple bench and cabinet design. The removable rear seats in the element also make it possible to have either bench or cabinet and a third seat. My vision of a modular, removable camper, with no alteration of the car itself, was taking shape.

Over the next couple years the build went through many many iterations but gradually came together as the rolling fort of my dreams. By the time my girlfriend and I left Santa Barbara to strike out for the east coast the Fifth Element Micro Camper was more or less fully formed. 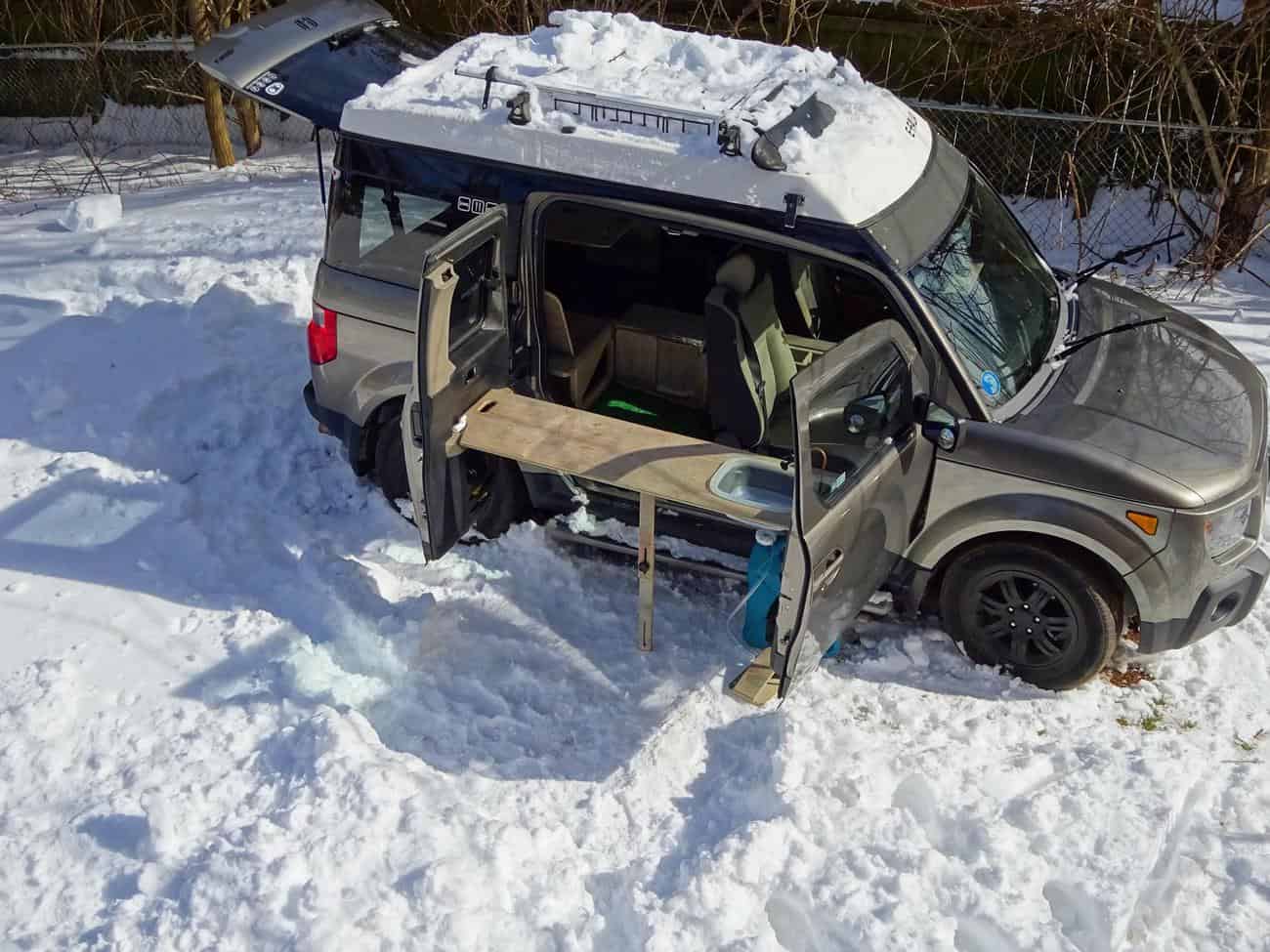 We came to Asheville to be close to family and to put down roots. I was familiar with Asheville’s reputation as a vibrant small city with a thriving outdoor sports scene, but I was pleasantly surprised by the culture of entrepreneurship I found. This area has a crafts person’s sensibility for creativity, resilience, and a do it yourself-ed-ness that seems endemic to the region. 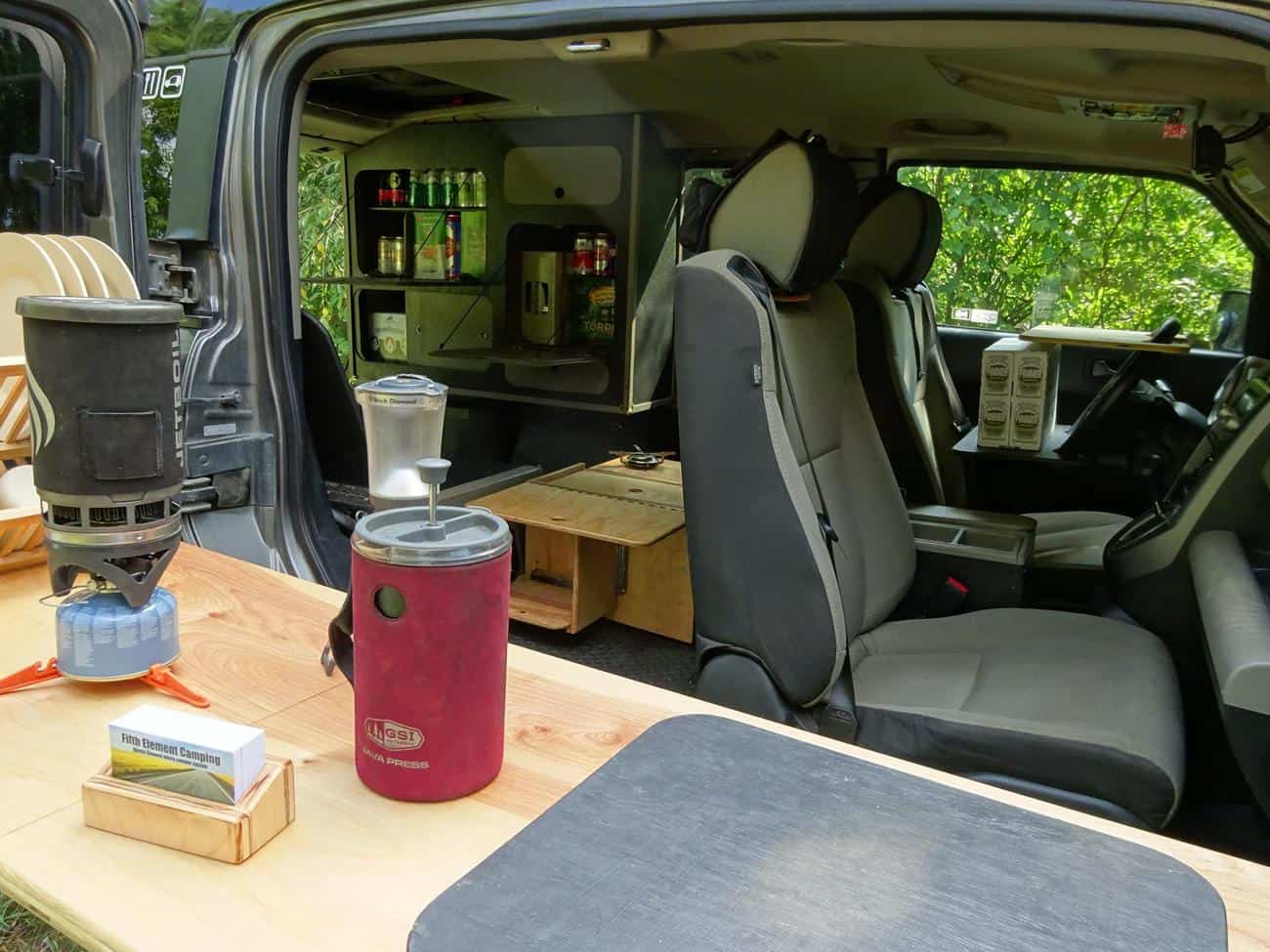 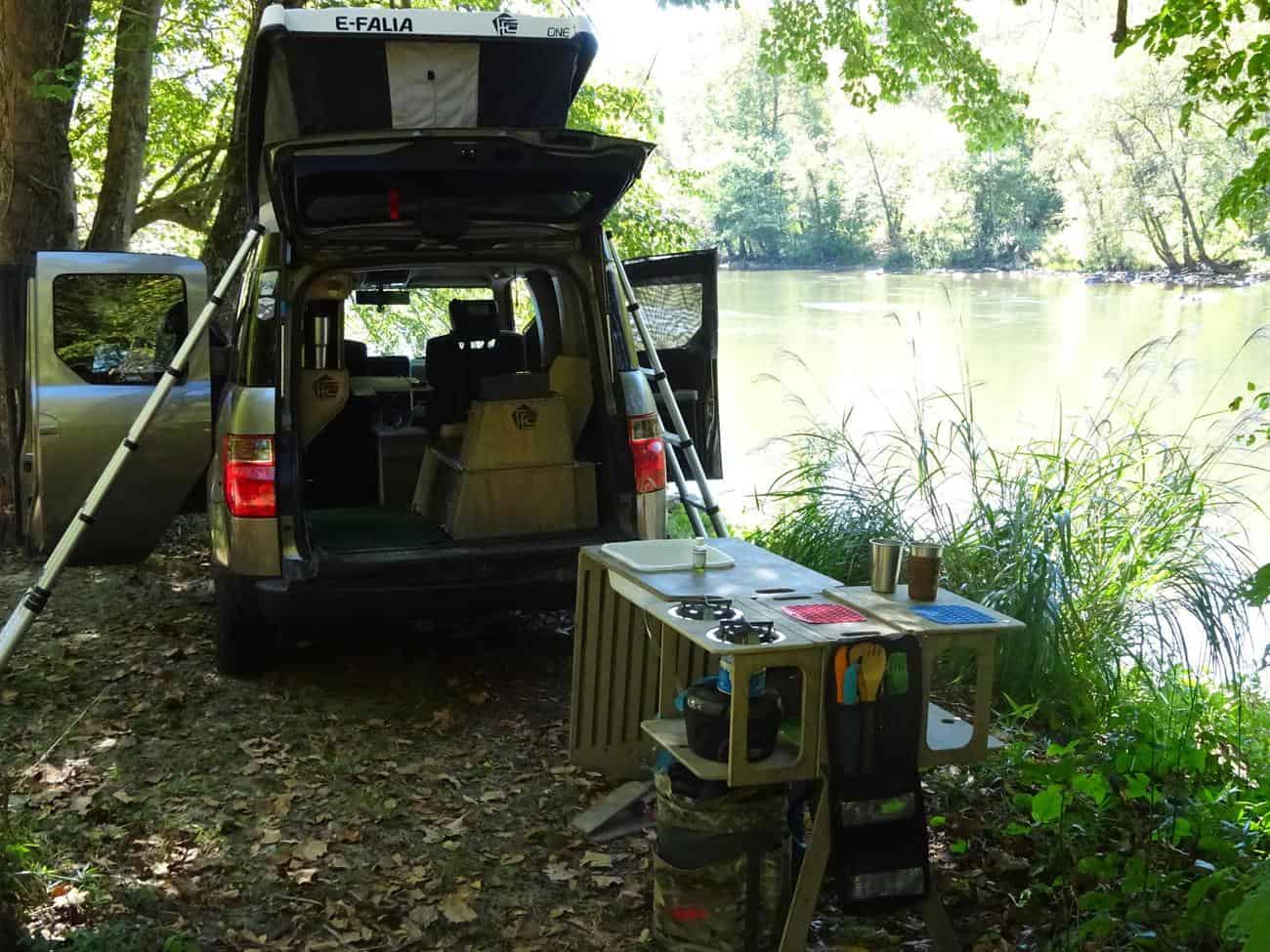 In short order I became aware of the Outdoor Gear Builder’s of Western North Carolina. It is a network of local entrepreneurs in the Outdoor Gear Industry who work together with the intention of building a thriving outdoor gear economy. I attended their first ever “Get in Gear Fest” in March 2015 and was impressed to see such a wide variety of locally made outdoor products, from kayaks to slingshots, and to meet and get to know many of the folks from companies like I9 wheels, of which I had long been a fan. 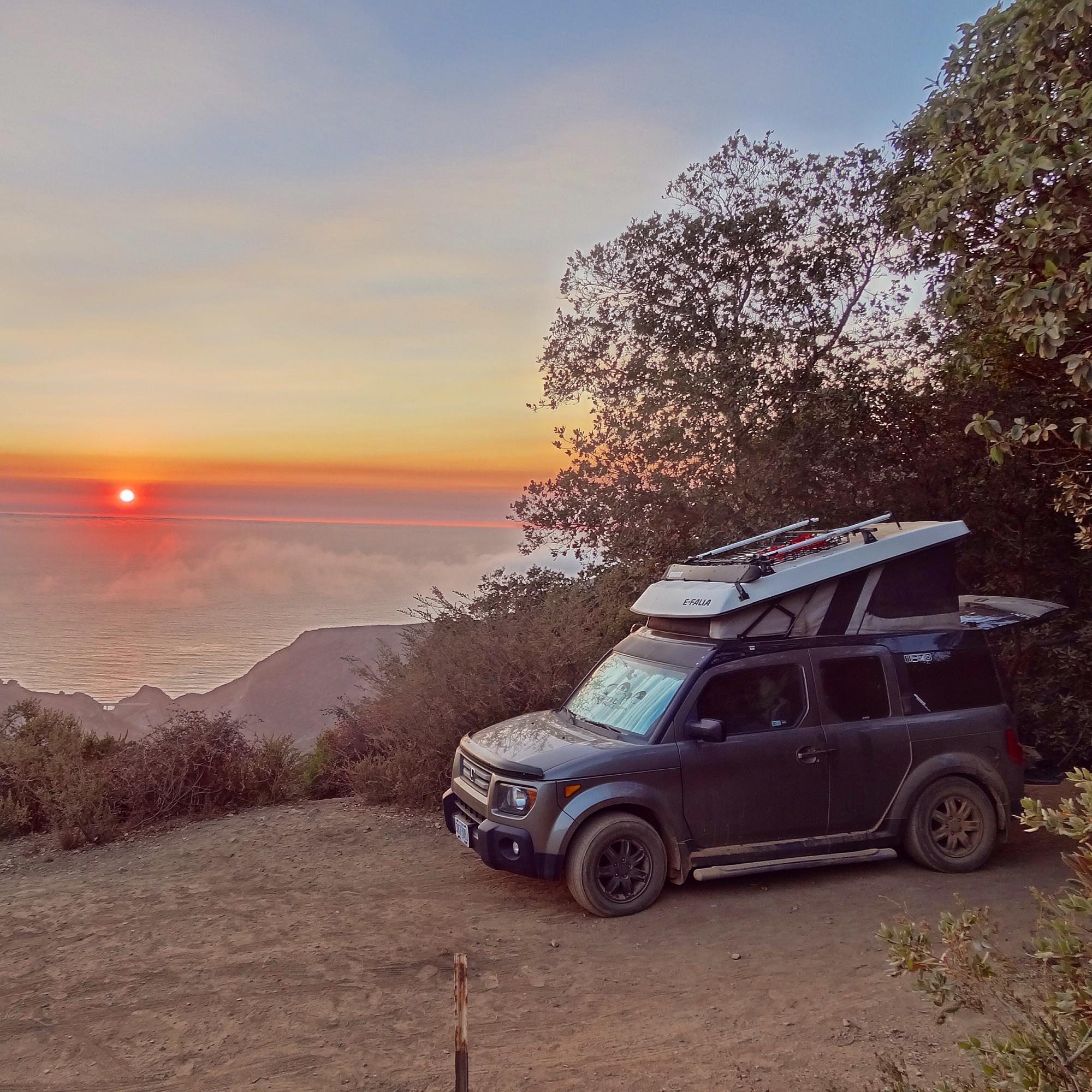 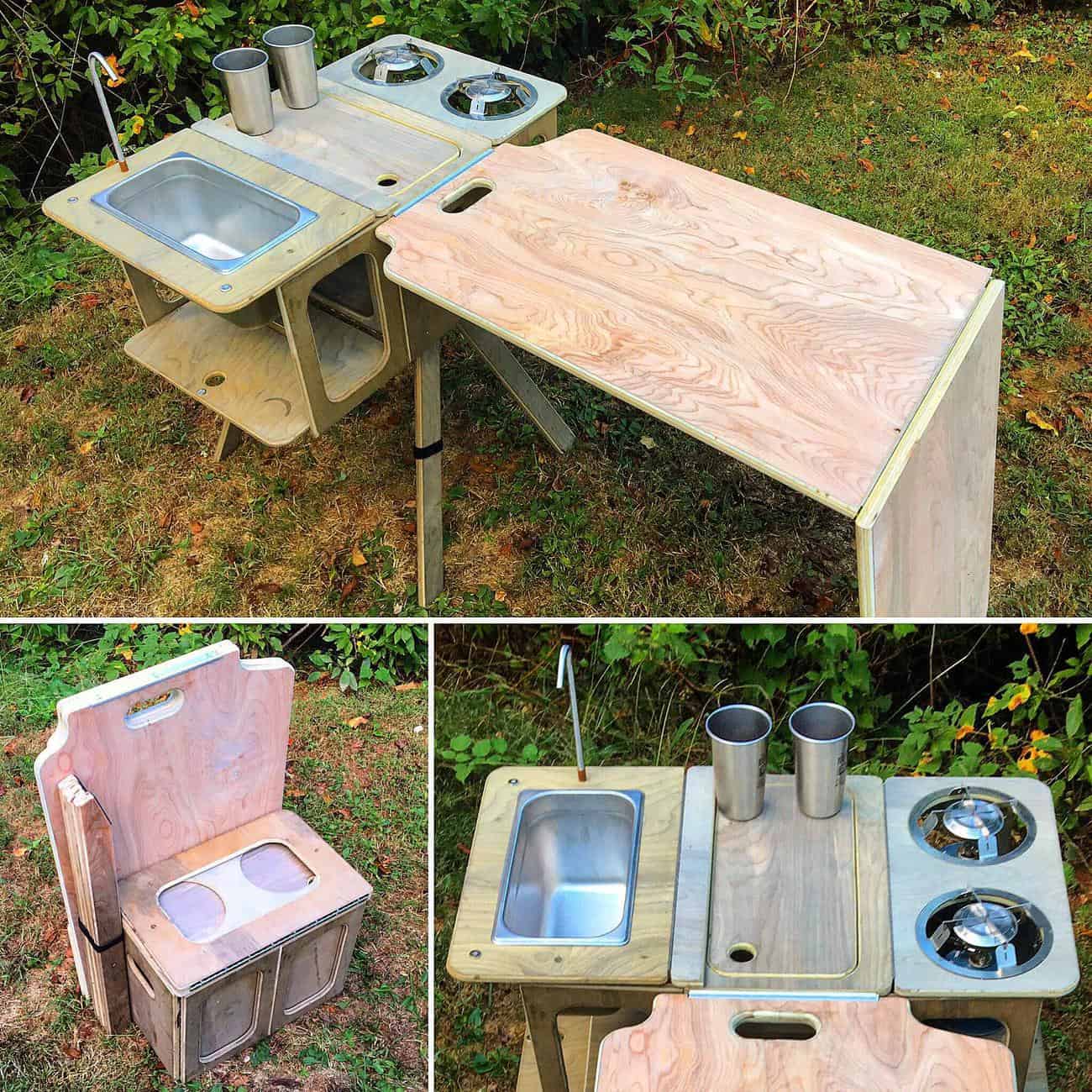 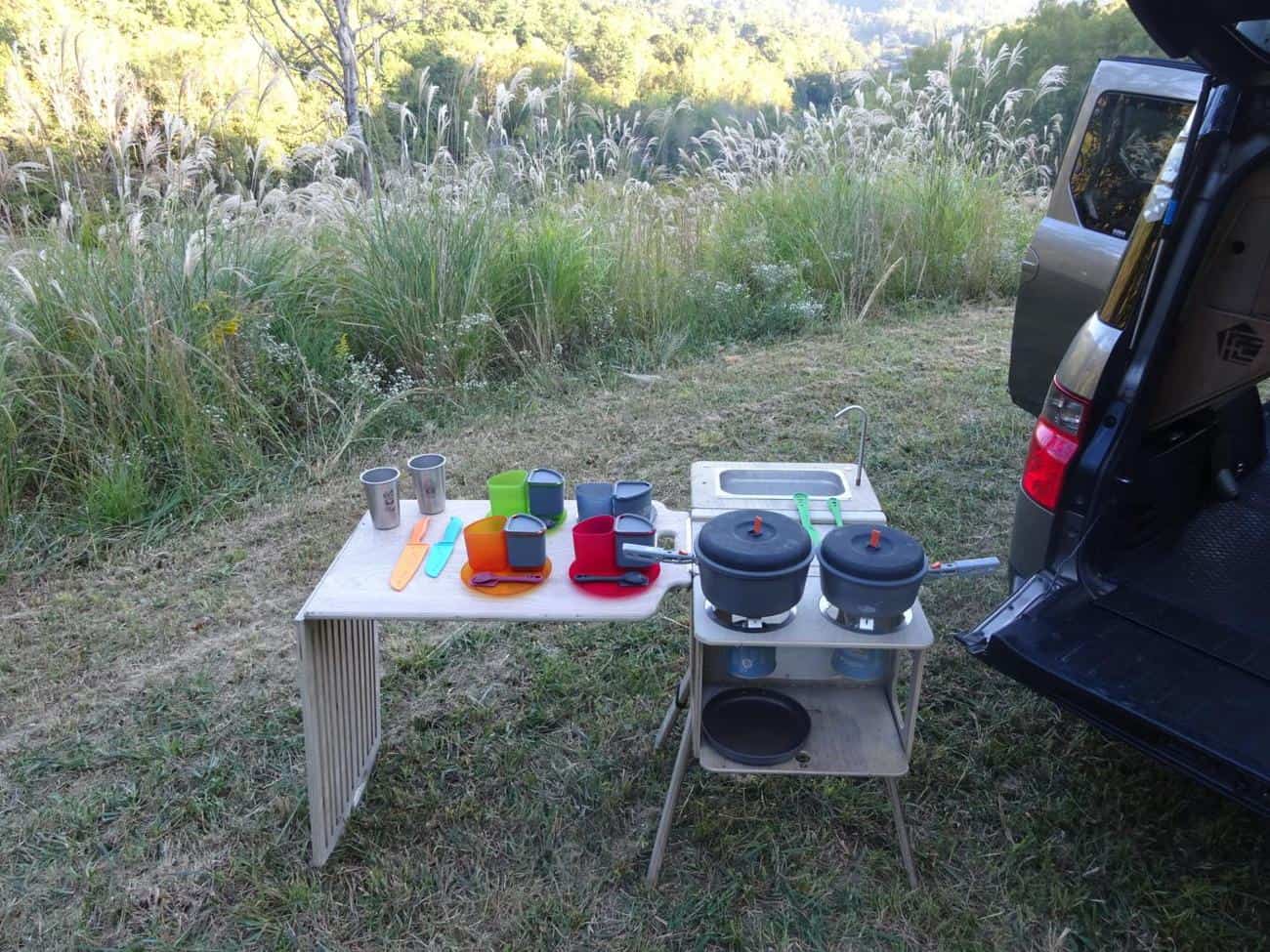 Since joining the OGB a little over a year ago, the project has really accelerated. My woodworking skills have improved a lot and I’ve added and refined new components like a center console for the empty, boxy element and a removable camp kitchen that can work in any car- complete with the kitchen sink.

With the advice and support of other OGB members I have sold my first few hand made models for field testing with other Element owners and I am currently looking for just the right fit to begin commercial manufacturing. 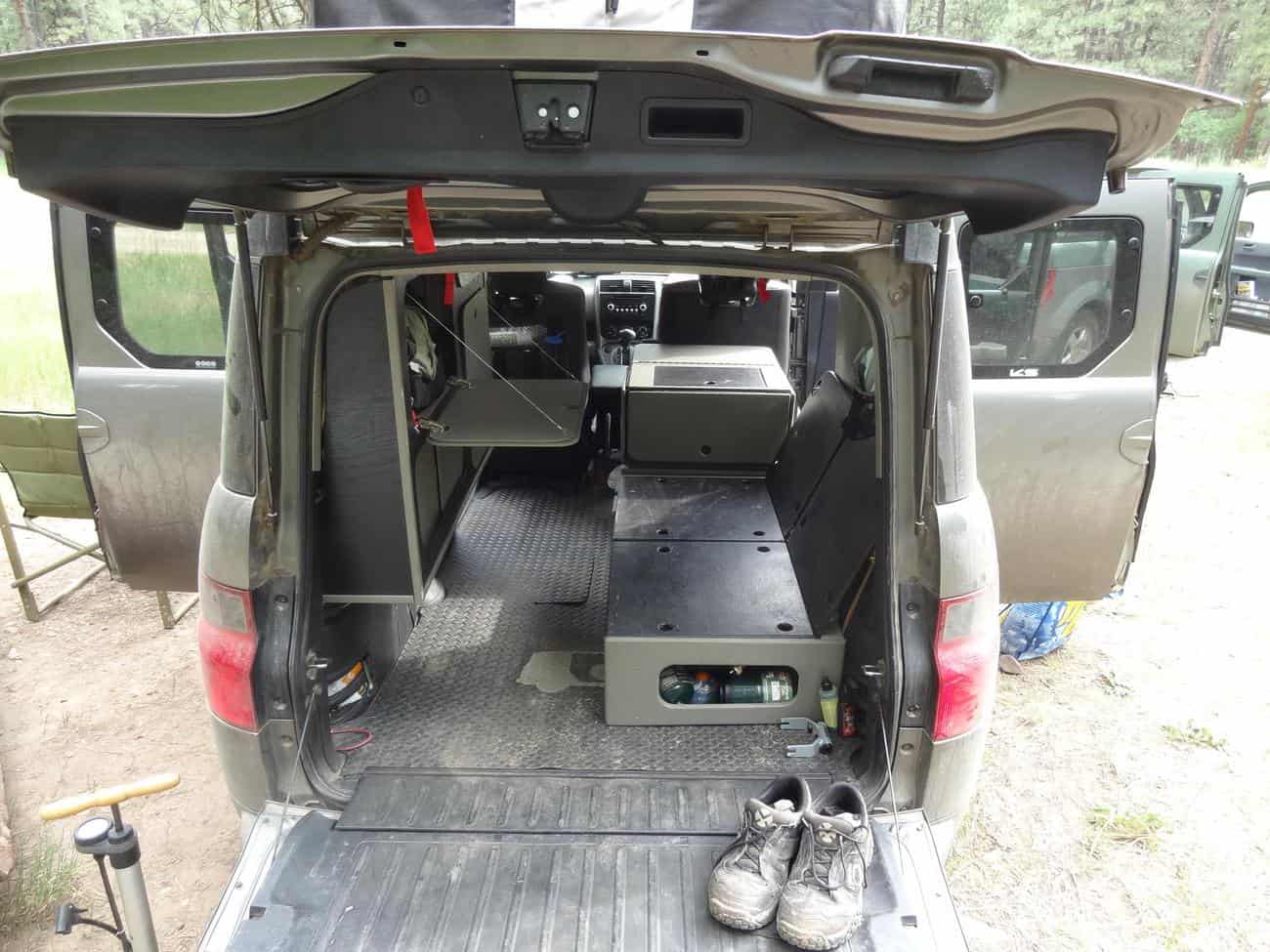 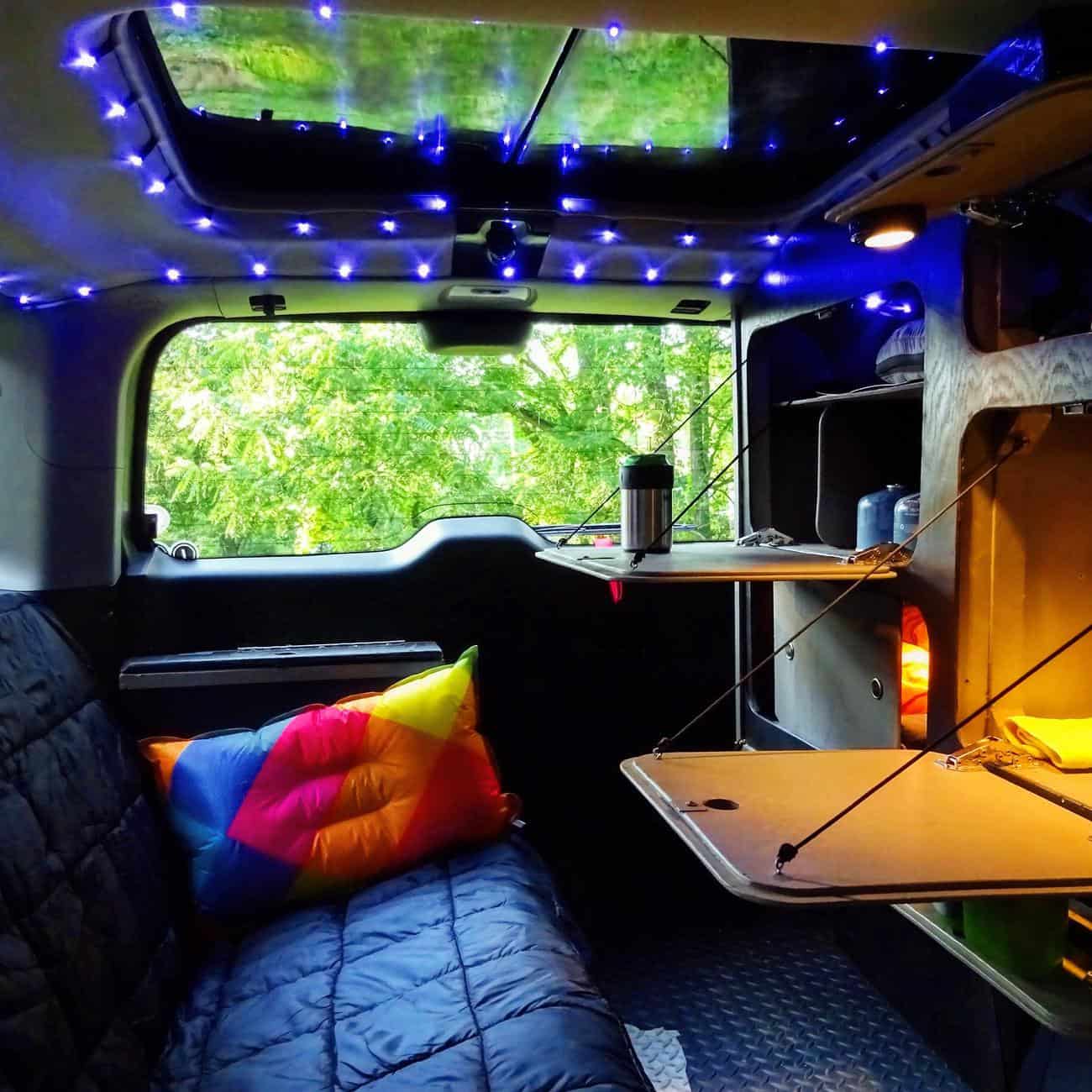 This project is certainly a labor of love. It started out as something simple and silly I wanted for myself but it has become central to my life and dear to my heart. It has been a way for me to showcase and share the joy I get from mountain biking, camping and being outdoors, and also from creating.  Even after so many years and so many more variations of the micro camper I am still beyond excited to see my vision come to fruition. I don’t think I will ever be finished tinkering and improving on it- because, the little “a ha” moments that come from designing and building bring me a happiness and satisfaction that, for me, is second only to gliding through the landscape on a beautiful section of single track.

More information on this build and other products, check out Nick’s site at FifthElementCamping.com 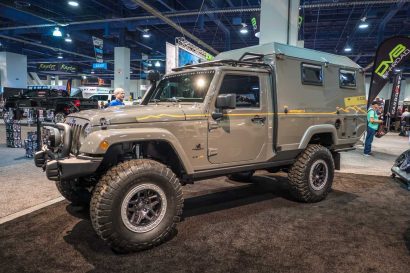 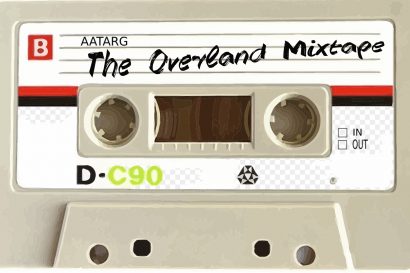 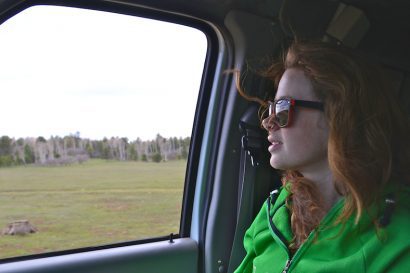