There are many places on earth that once visited, defy their descriptions. I recently visited such a place, a landmark of legendary notoriety in the rugged backcountry of northern Baja. Highlighted on maps, mentioned regularly on forums and Facebook pages, this storied attraction held my interest for the many days it took to get there. Countless explanations failing to answer my question, I wondered repeatedly, what is Coco’s Corner? After finally arriving at this far away place, I approached it with the reverence it seemed to have earned, and even standing right in front of it I had to ask myself once more––seriously, what in the hell is Coco’s Corner?

Although it technically resides at a major intersection, it’s essentially in the middle of proverbial nowhere. Miles from pavement in any direction, it sits at a solitary location on the road south of San Felipe just before that route connects with the now well maintained Mex 1. This innocuous coordinate wasn’t chosen by chance. Every year, thousands of adventure seekers from around the globe travel past Coco’s Corner making it one of the most frequented roadside stops on the entire peninsula. Now that I knew where it was, that still didn’t answer what it was.

I credit Scott Brady for the best description of Coco’s Corner. He simply asked, “Do you remember the bar scene in Star Wars?” He didn’t have to follow up on that question, nor did I. I was beginning to get the idea. As we parked our motorcycles out front and worked our way towards what I would best describe as Coco’s reception area, I couldn’t help but marvel at the oddity of it all. On a back wall were the obligatory stickers that seem to smother nearly everything that stands still in Baja. If you happen upon one of these types of places, keep moving lest you get a “Joe’s Off-road Racing” sticker slapped on your temple.

The centerpiece of the area was a giant cable spool, repurposed to serve as Coco’s table of the round. Most notably, overhead was a frightening display of ad hoc decorations. It was a candy colored kaleidoscope of t-shirts and underpants donated (I had hoped) by previous visitors. The soundtrack to this experience was appropriately provided by a soft rush of desert wind and the quiet clanking of a string of old beer cans carefully fashioned into Coco’s storefront signage. 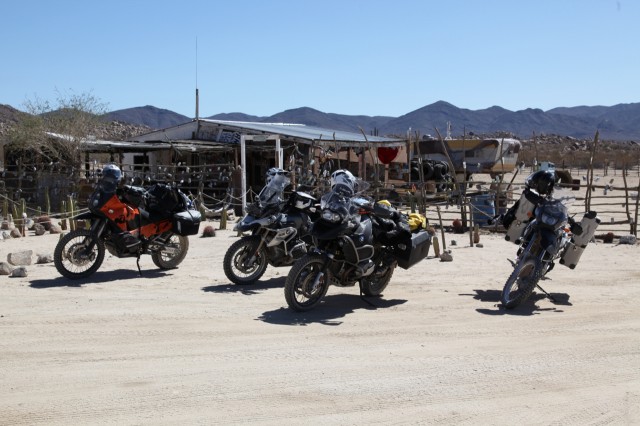 As habitats go, Coco’s Corner is Baja at its best, a haphazard assemblage of broken trucks and appliances intermixed with strange bric-a-brac from ages past. But, this isn’t really about a ramshackle dwelling in the dust and rubble of backcountry Baja. This is not even about the corner. This is about Coco.

Within minutes of our arrival, we were graciously summoned to Coco’s round table, offered ice cold Pacifico beers, and as if holding court, the pleasantries ensued. Coco, a man of indiscernible age, tanned like a Virginia ham and drifting in and out of English as if for pure amusement, was the consummate host. Well practiced in the fine arts of jib-jab, Coco asked the standard questions as if they had never been asked of anyone before. “Where you go? Where you from?” We answered his questions in between sips and silences, and as if on cue, Coco reached for a book on the table and slid it towards us. 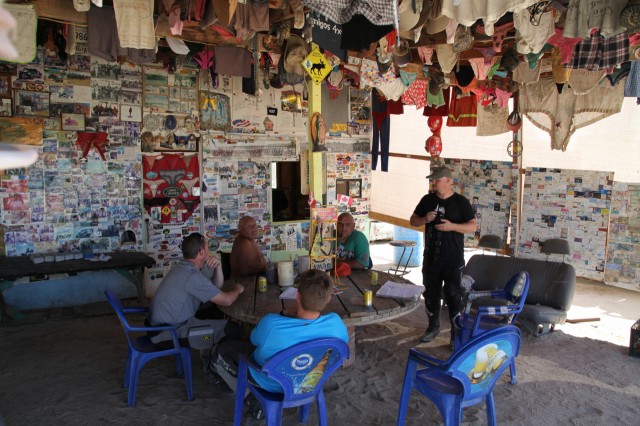 I had heard of Coco’s book and truth be told, was starting to get excited about the prospect of being in it. A tattered and worn hard-bound notebook, it held the names, birthplaces, and vehicles of thousands of prior visitors. Taking time to read the previous pages, we even recognized the names of friends from our own home town who had beaten us there by a matter of days. When Coco casually mentioned that this was his ninth such book, the others filled to capacity, I began to gain perspective on just how significant Coco and his corner are to Baja.

As our time at Coco’s came to a close, I took extra care to catalog the moment in my mind. Coco is not a young man and his years have been hard earned. The demons of diabetes have claimed his lower legs, and living in remote Baja is not an easy life. Like so many travelers, I felt thankful to have met Coco before time and illness got the better of him. It was at that point my friend James brought up an interesting observation. Countless visitors over the years probably thought they too were amongst the last to hold court with Coco. Many of those poor saps have likely bought the farm since. 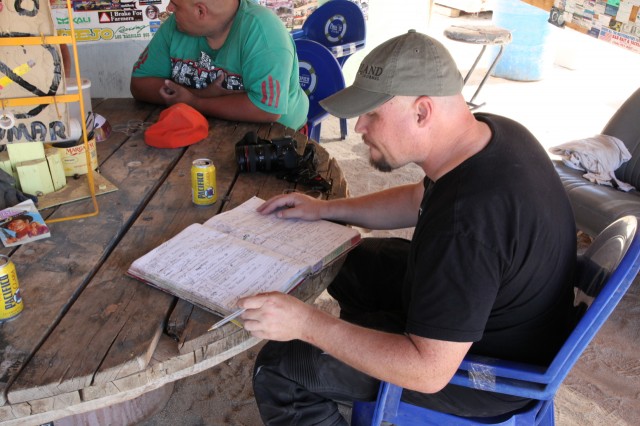 Mortality is not the most pressing threat to Coco’s Corner. The allure to this roadside hovel is its remoteness. That attribute is soon to be dissolved by the advancement of pavement. Like a giant black serpent, the well-paved road from San Felipe is slowly snaking its way to Coco’s Corner. Bridges worth tens of millions of dollars now span the arroyos towards Coco. Sweeping turns and painted lines are making their way there as well. The road reaching south will eventually arrive on Coco’s door front, a massive conduit to the tourist-filled resorts to the north and south.

As we exchanged our final salutations, Coco returned to his day, one spent in the shade doing what, I have no idea. Waiting for the next delivery of strangers, more signatures to fill his book. What is Coco’s Corner? Having been there in person I don’t know that I have the answer to that query. It’s an institution, an example of changing times, or maybe times that never change. Or perhaps its just a welcomed place to take a break from a day’s hard travel to suck down some suds and meet an interesting fellow by the name of Coco. 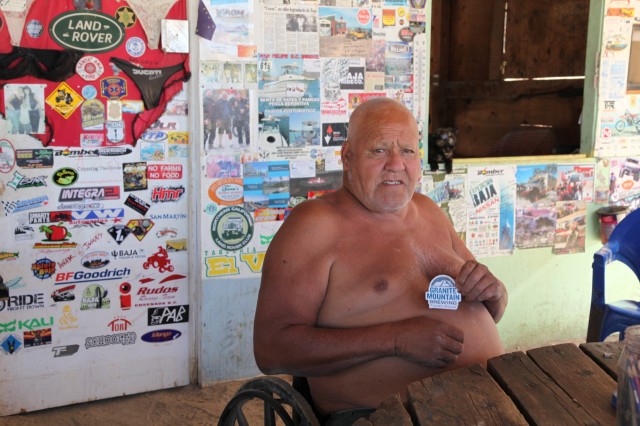