“I’m sorry sir that road is closed. It’s the county’s responsibility to reopen it. We have nothing to do with it”

“I have no idea what you’re talking about.”

Those are the 3 responses we received from the powers that be when we called to ask about the drivability of Left Hand Collett Canyon in October 2008. We had heard that the canyon was closed because of yet another massive flash flood that summer. Troy DeMill, Will Carroll and I had done the canyon with Kurt Williams in the winter of 2006 and even then the road had been severely washed out and almost impassable. We came within inches of rolling and serious body damage. Another flash flood meant only more difficulty, more and more satisfaction. We decided to roll with the ‘sure, give it a shot reply’ and set out to conquer the impassable. 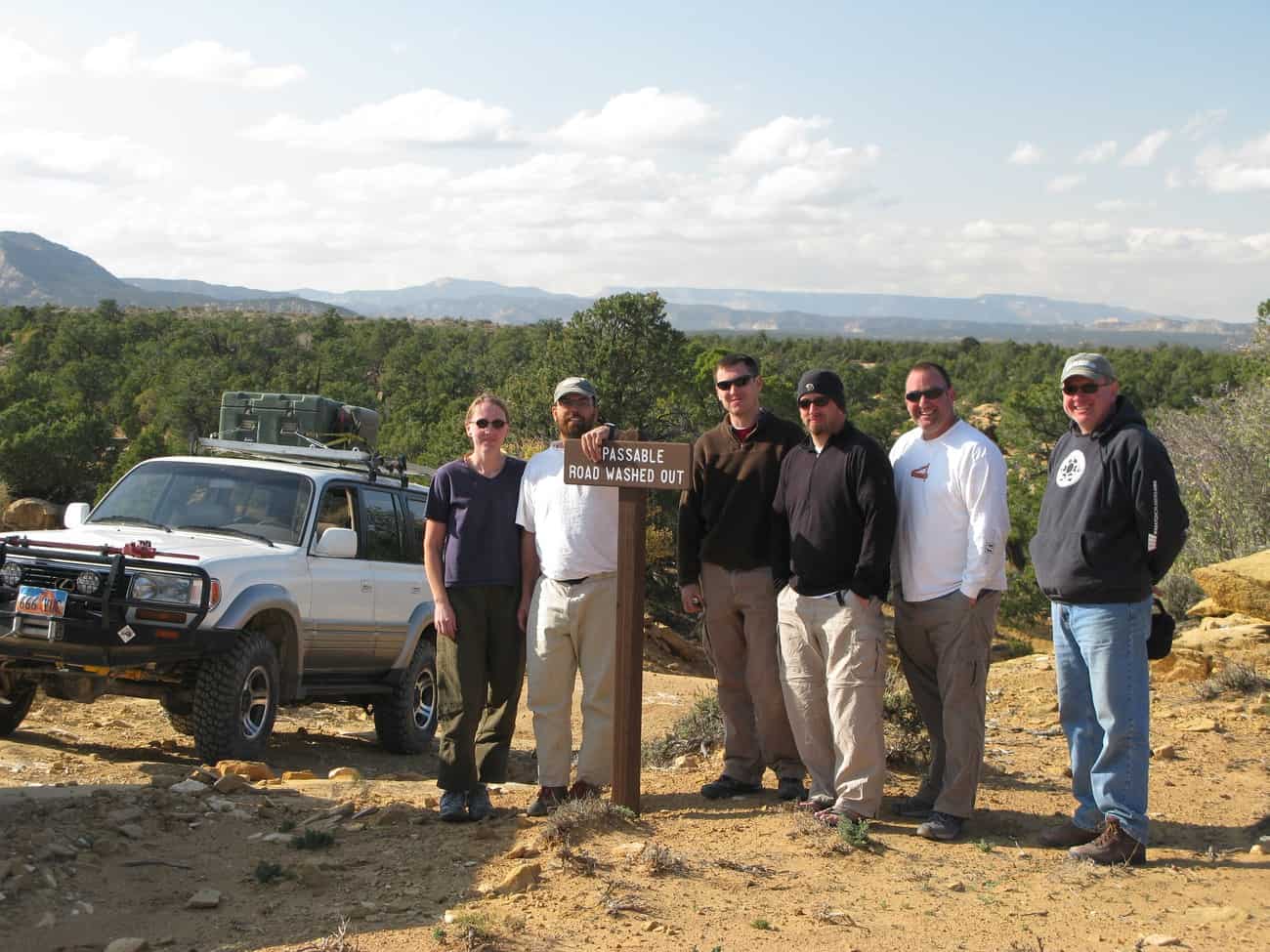 Left Hand Collett (LHC) lies in the heart of the Escalante Grand Staircase National Monument in central Utah. Most parties agree that Grand Staircase was an election year land grab by President Clinton to help him swing the green vote in California. Very little has happened to the Monument in the years since. A few bathrooms built, a new sign here and there and the occasional local political scuffle. Most of those revolve around who owns the roads. The NPS loves to improve and maintain the simple and scenic roads and then blame the county when the more remote and rugged routes need repair. Regardless we took advantage of the posturing to allow ourselves some serious, hardcore wheeling, in a beautiful location that more than likely would be closed to future attempts due to lack of funding, bureaucracy and political wrangling; and with that, on to the story. 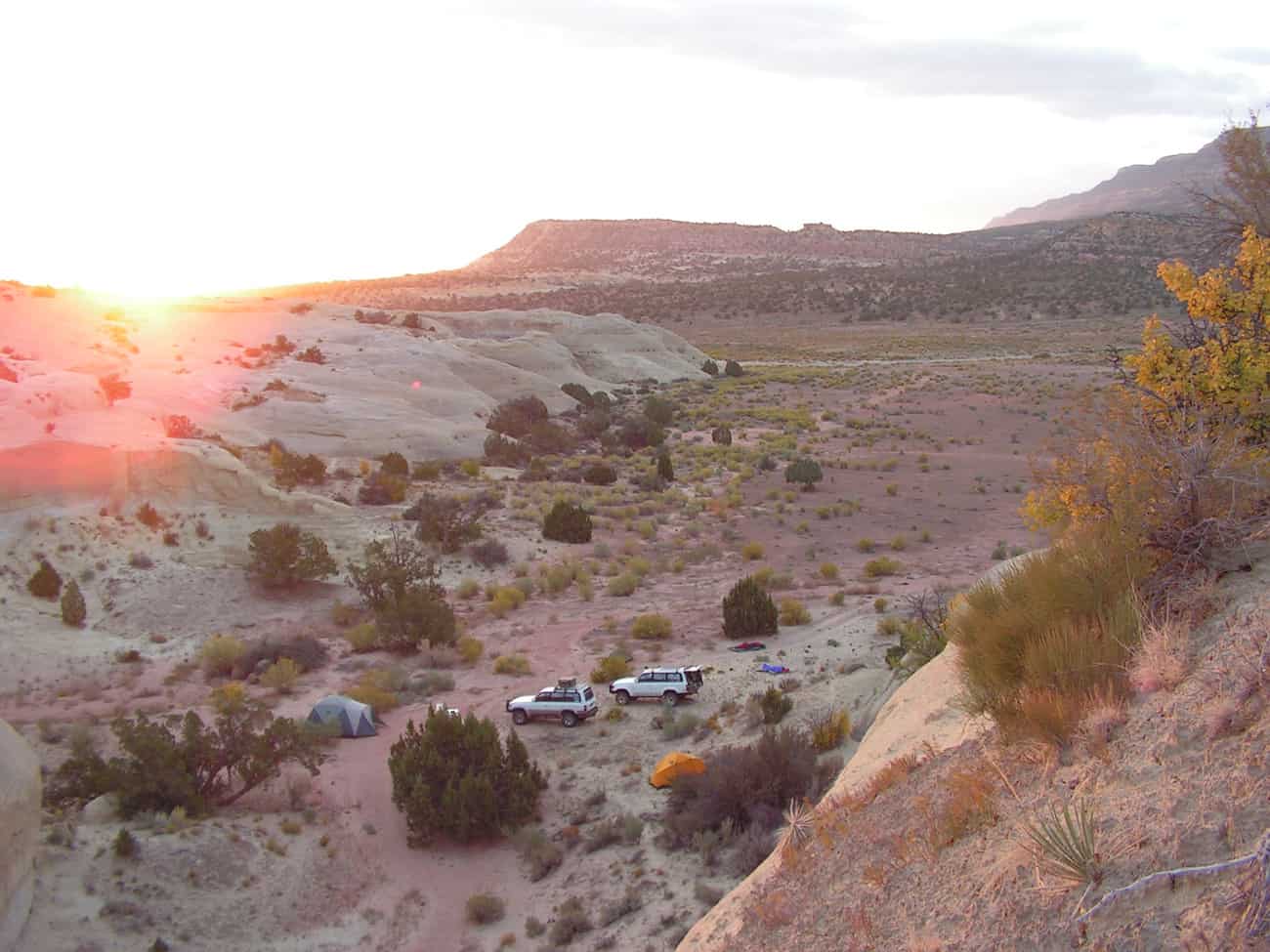 In attendance were Royal and Loretta Rose with their kids, Delaney, Olivia and Walter. Darren Webster, Troy Demill, Will Carroll and J Ralls split time between Troy and Will’s trucks. All three cruisers on the trail were variations of a white 80 series. We set up camp in the dark near the entrance of LHC just south of Escalante, UT and woke to a beautiful but cold morning. While some of us slept in Troy, Will, J and the Rose family went for a hike at sunrise to examine some of the dinosaur tracks found on the ridge above our camp. As the morning light filled the canyon the flood damage also came into view. Silt had covered the 400 yard wide canyon floor and destroyed all the sagebrush. There were watermarks 30 or 40 feet high as the canyon narrowed down to a few hundred feet. What used to be a fast washboard road was now a boulder strewn wash that required patient navigation and tire placement. 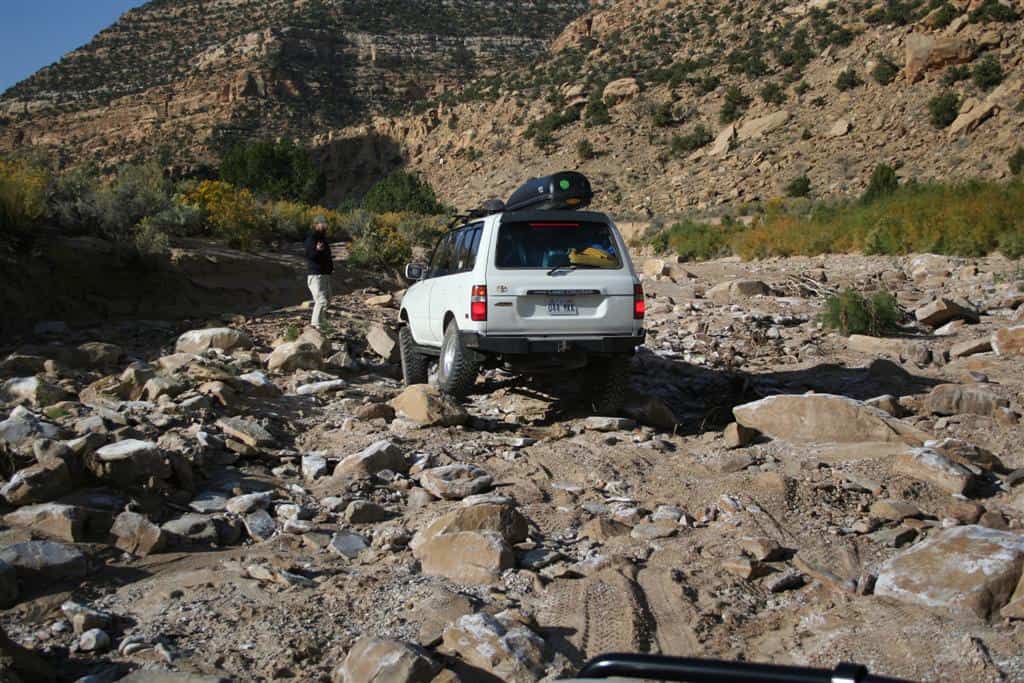 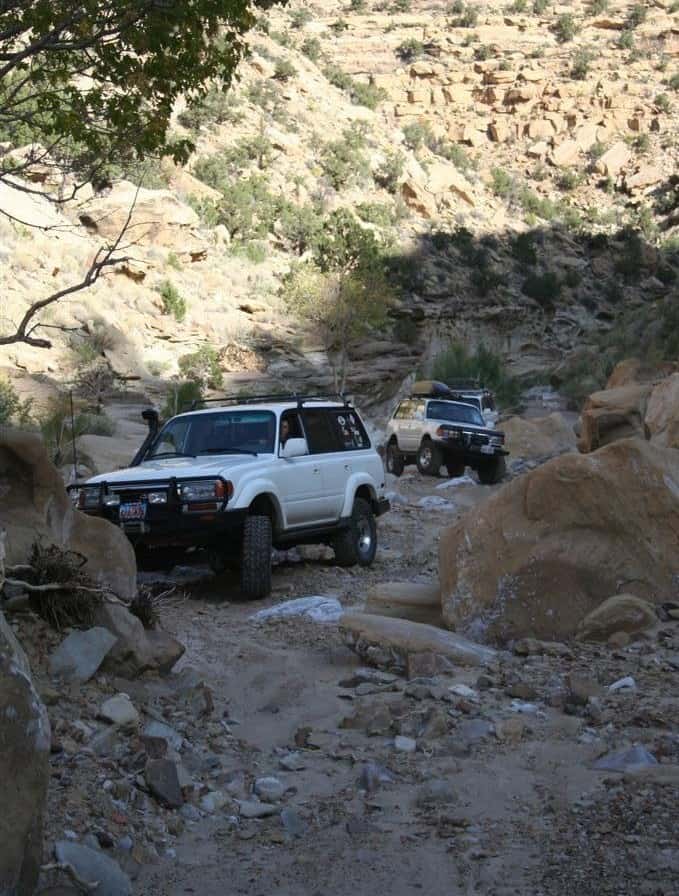 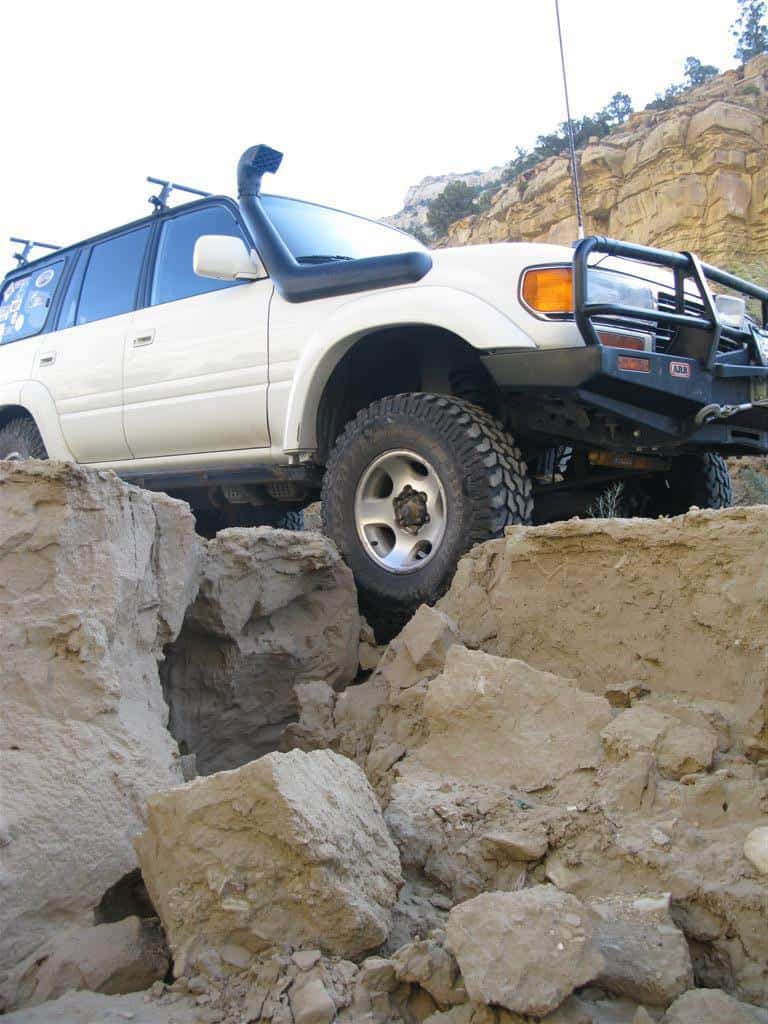 We passed the sign that read ‘Impassable, Road Washed Out’ and proceeded to climb the canyon. Within a few miles we came upon our first real obstacle. Where the road left the wash and up the talus slope the flood had wiped out the road and left us with a 4 foot wide, extreme camber 8 foot climb. Well we came prepared. We set up a winch point using the extra 100 feet of cable Royal had in his truck and used shovels and a massive stack of rocks to build what could pass as a road up out of the wash. Will made the attempt first and slowly found his way safely up out of the wash. Road built, we crawled and winched the other two trucks out of the wash. It only took about 2 hours to get passed the obstacle and we naively assumed the worst was now behind us. 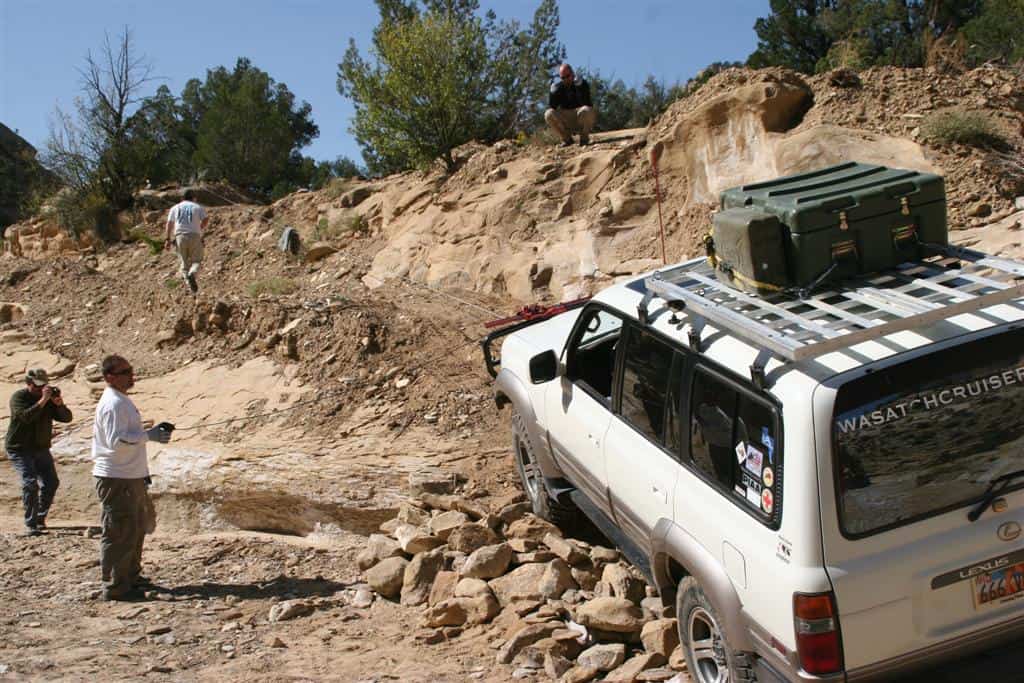 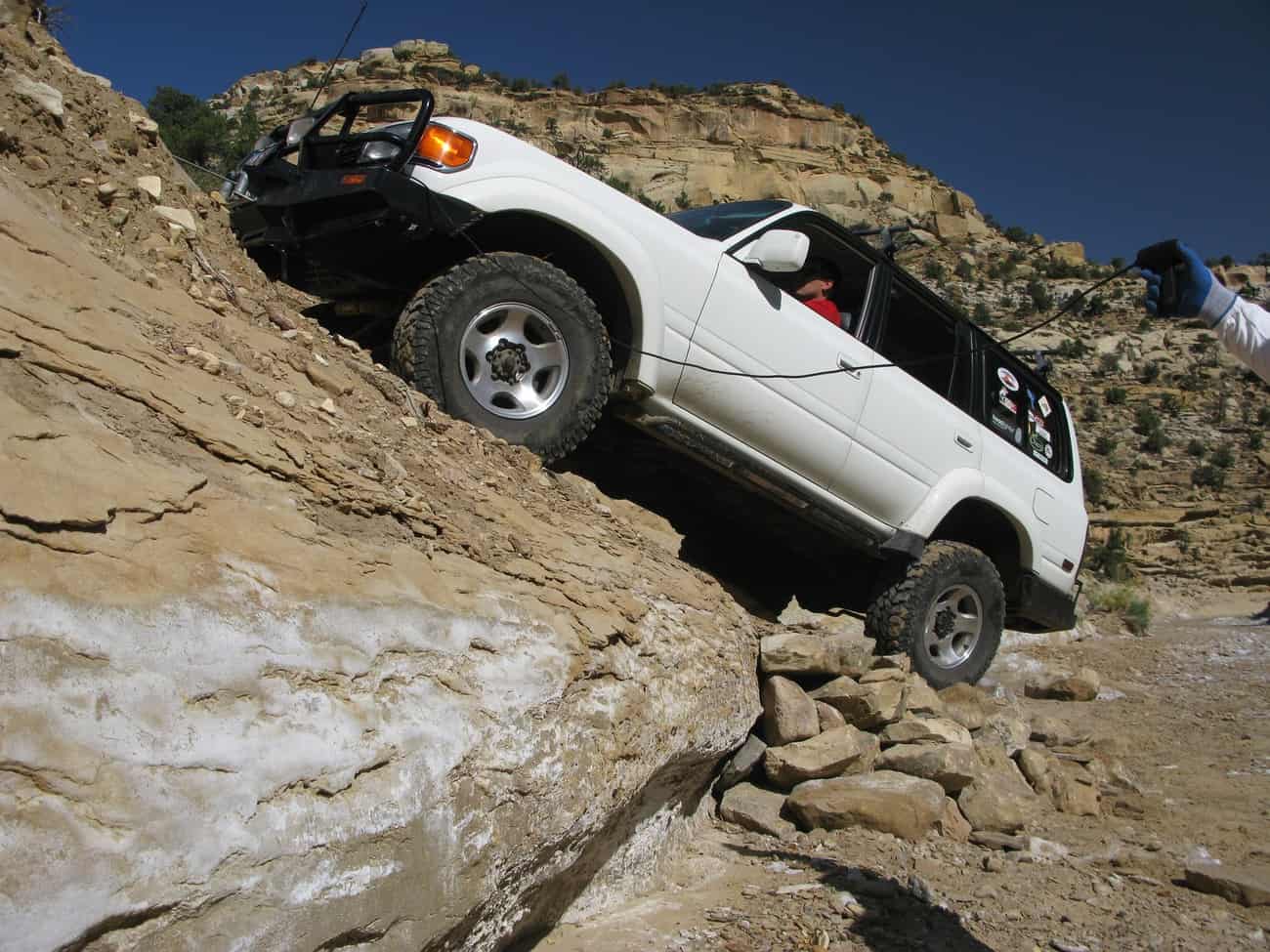 We wound our way up and out of the canyon, ironically the obstacles that had given us fits 18 months earlier were now simple or non-existent due to the massive amounts of silt and rock filling up the canyon floor. There were occasional challenges, including one or two that required some more rock stacking, but we made good time. As we climbed closer to the rim we began to sense our day was over and that we would be back to camp earlier than expected. Much to our delight the exit to LHC would be just as difficult and exciting as our entrance. Within a few hundred yards of the plateau the road disappeared and a field of boulders and ledges took its place. 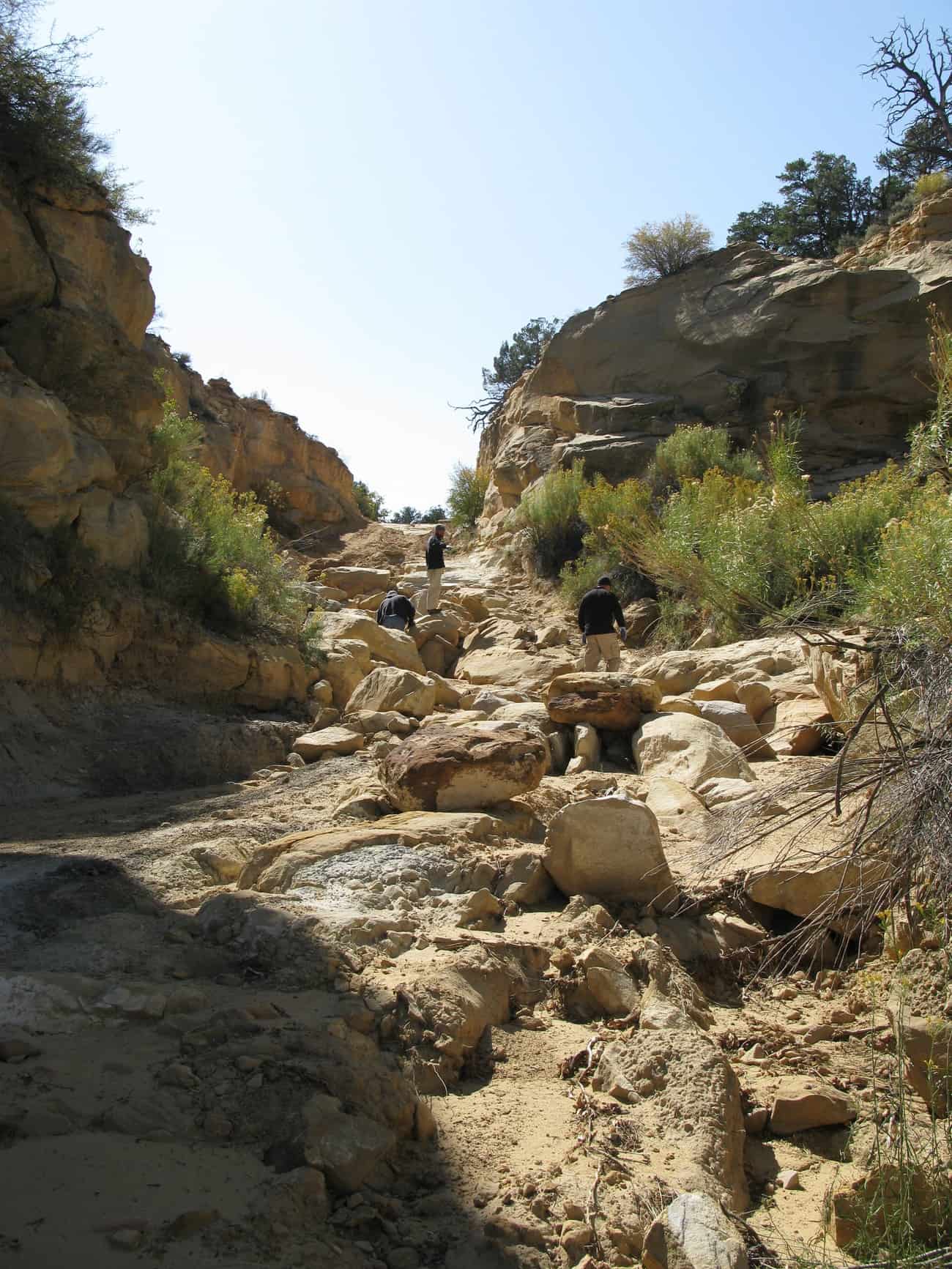 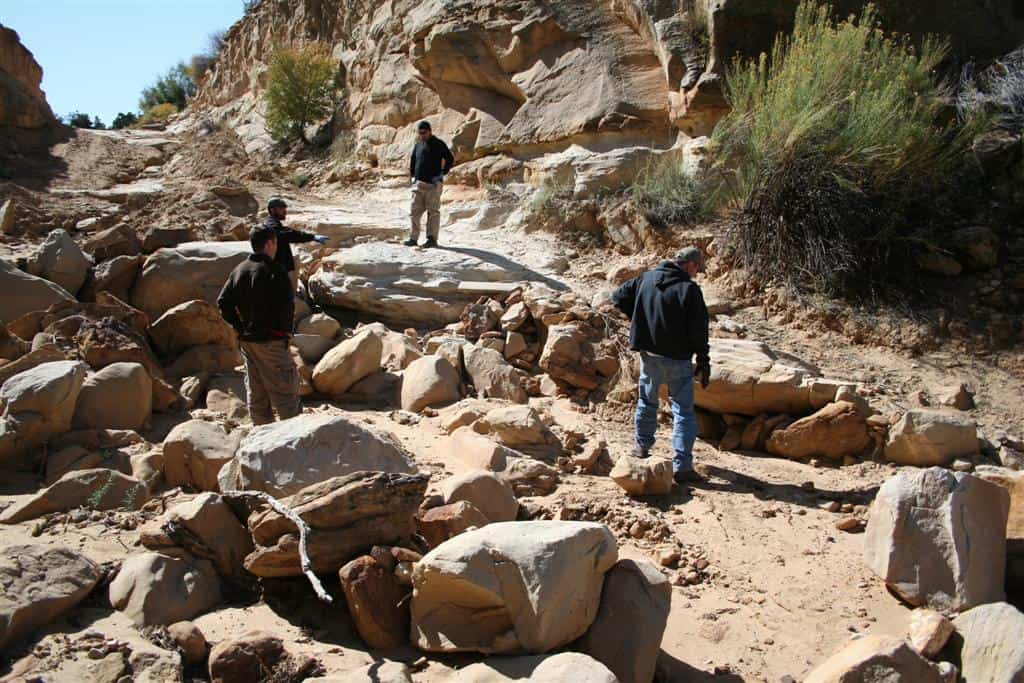 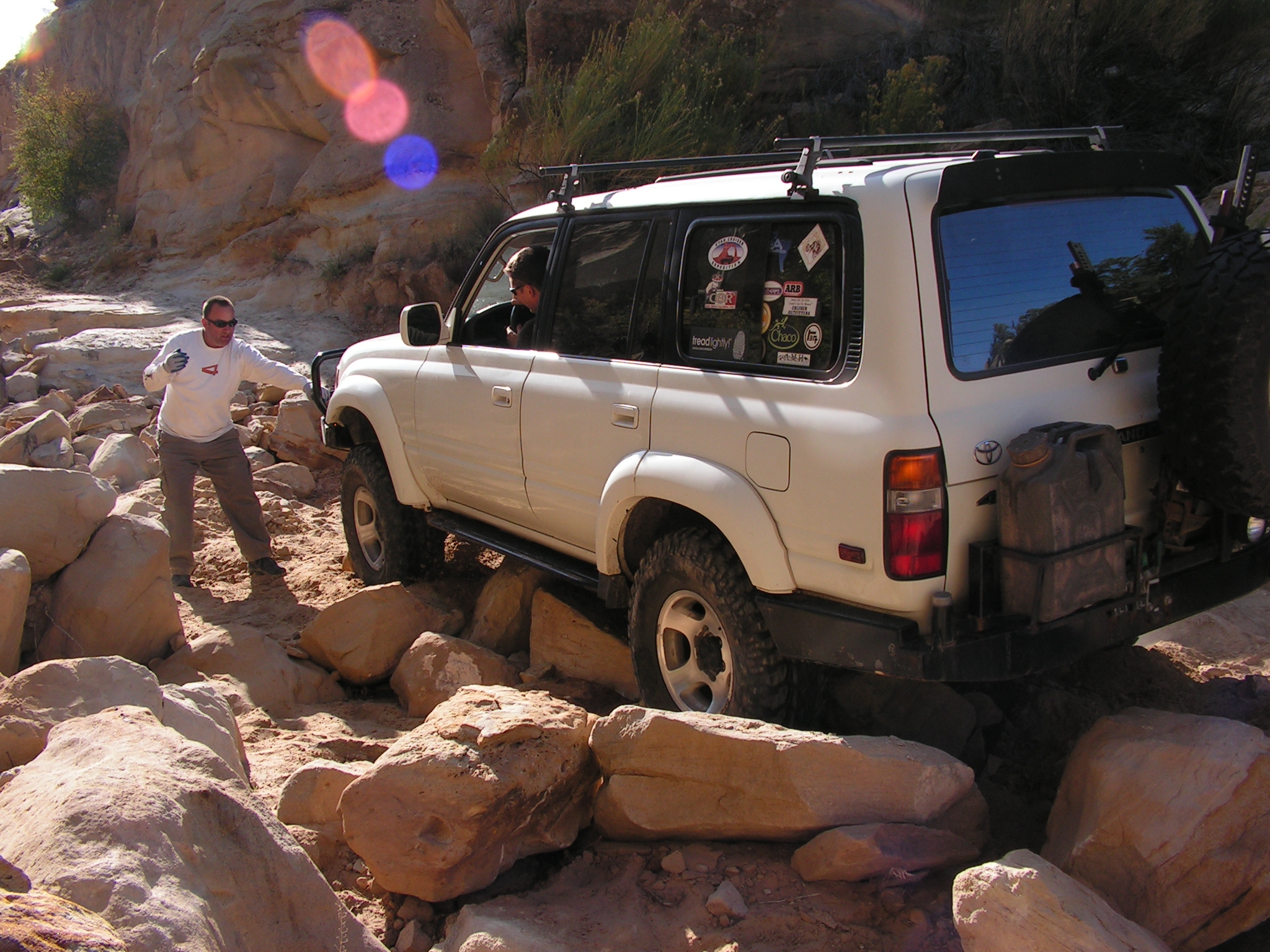 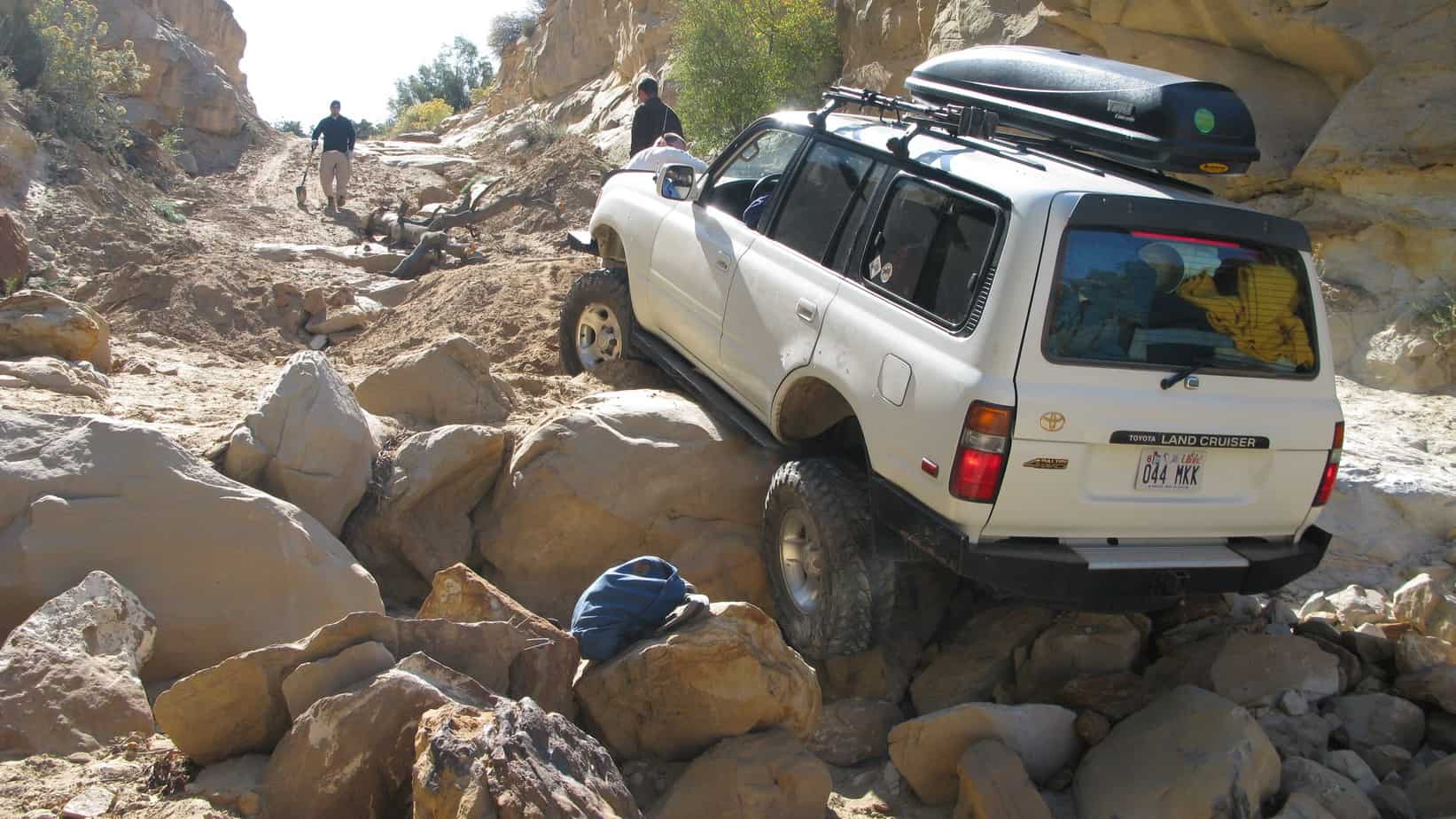 With a lot of line discussion, plenty of stacked rocks, and cameras handy, Loretta attempted a climb out the final ravine. It didn’t quite go as well as we all would have hoped. After two or three attempts, some more rock stacking and a couple of different lines we managed to get her hung up on both differentials and the driver’s side slider. No problem, the winch had plenty of use on the day and could handle some more. Except, you need to have something to hook your winch cable to. All the rocks that now blocked our path meant the route above was void of winch anchors. Royal had a homemade Pull-Pal that we dropped down into a rut on the side of the road and attempted to wedge under an embedded rock. Well the attempt to winch out the 80 only pulled the small rock out of the hole. About 5 or 6 more attempts of dragging the pull-pal down the rut and it finally took hold. Finally off her diffs Loretta drove the rest of the rock garden with aplomb. 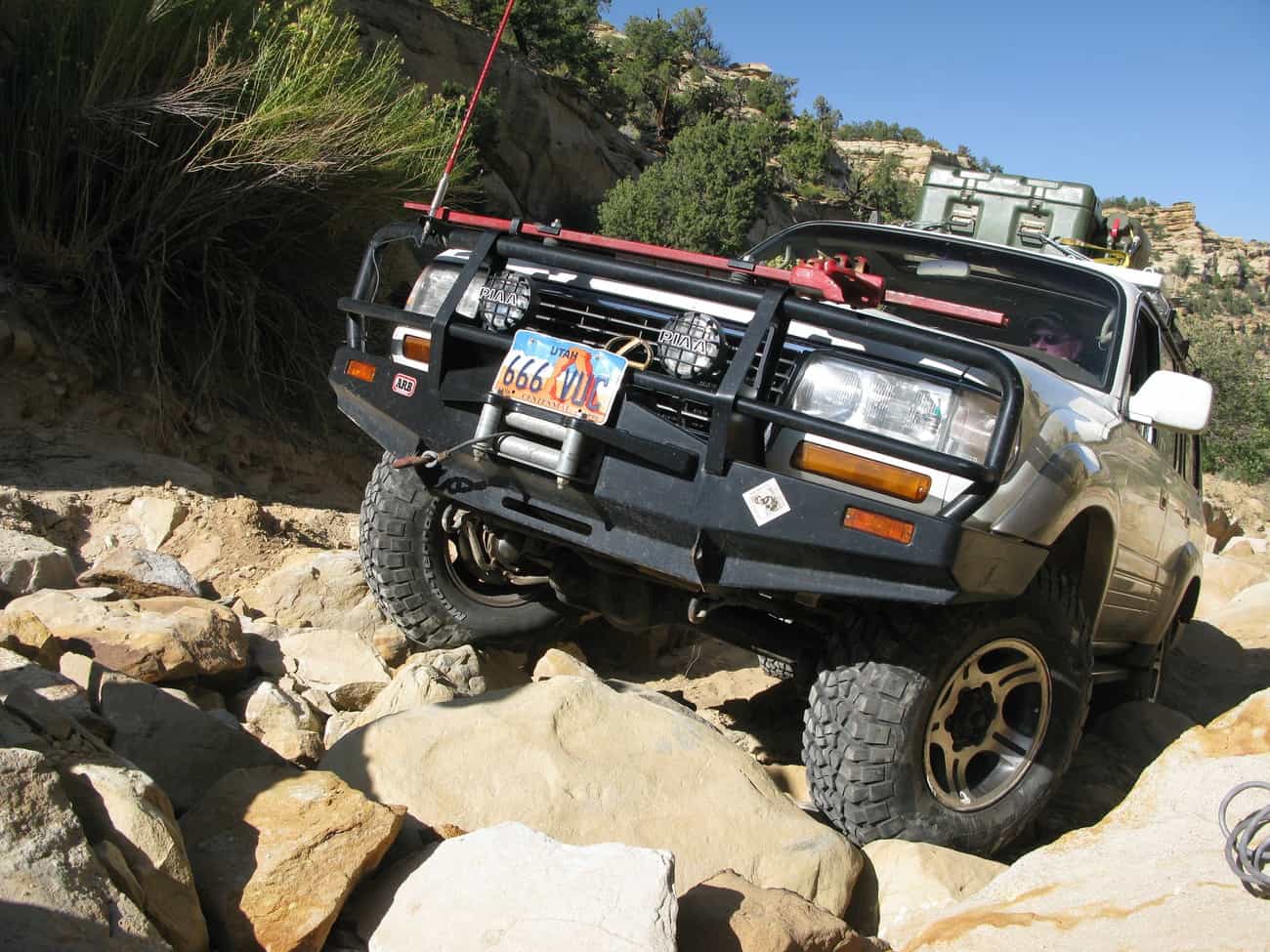 Now that we had the line Troy and Will made it through winch free and we were up and out of the canyon. We posed for a few pics at the “Impassable, Road Washed Out” sign at the top of the trail, having proved the NPS wrong, and set out to find a place to camp. We wandered into a somewhat sheltered basin to build a fire and set up our tents. The entire sandstone slab was covered with Moqui Marbles, thousands of them were piled randomly around. We discovered they explode if you get the fire hot enough. Now that I see people are selling them online for almost $20 I might have to make a return trip and load up the Cruiser. The wind blew hard and cold that night and we woke to a biting yet sunny morning. Troy headed home and the rest of us set out to hike some of the many slot canyons that make the Escalante drainage such an amazing and spectacular place. 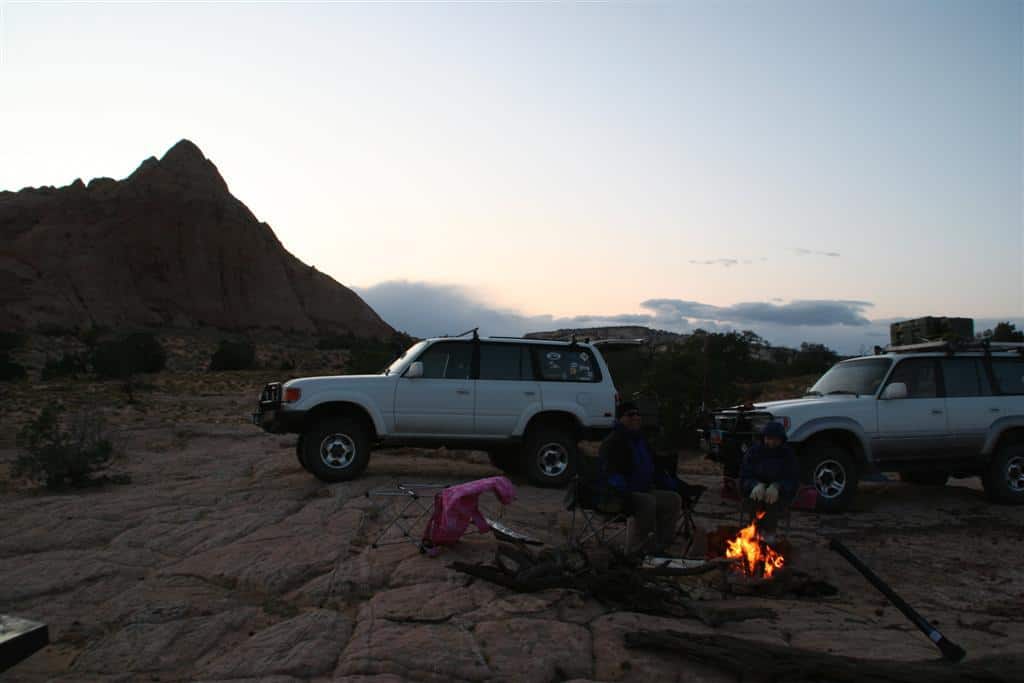 Spooky and Peek-a-boo Gulches make a fairly easy, yet dramatic and beautiful, loop hike that would be a perfect counterpart to the wheeling from the day before. After descending a few hundred feet of sandstone into Dry Fork Wash we quickly found our way to the trailhead. We began our climb into Peek-a-boo with some scrambling and crawling up the spillout from the slot. The canyon was narrow and cool yet fairly easy to ascend. The group, including 3 year old Walter (partially carried by his parents) made quick time of the canyon. After a brief walk over the plateau we stopped for lunch then began the descent of Spooky. Spooky proved to be the narrower and more intricate of the two slots. Some of us (me) actually had to drag ourselves through with a little more friction than we would have liked. We reached a narrow downclimb that required the lowering of the kids by hand. Next thing I know, I’m in front and Walter is just running down the trail in front of me. What makes for an awesome sand wash for a kid is a slow sideways shuffle for a ‘stocky’ grown man carrying his pack in front of him. The canyon finally opened up where I could walk normally and it took me a few minutes to catch up to the fearless little kid. There he was waiting patiently for me to help him down another slippery climb and the process started all over again. Before long we exited the slot, snapped a few more pics and began the leisurely climb out of the wash. 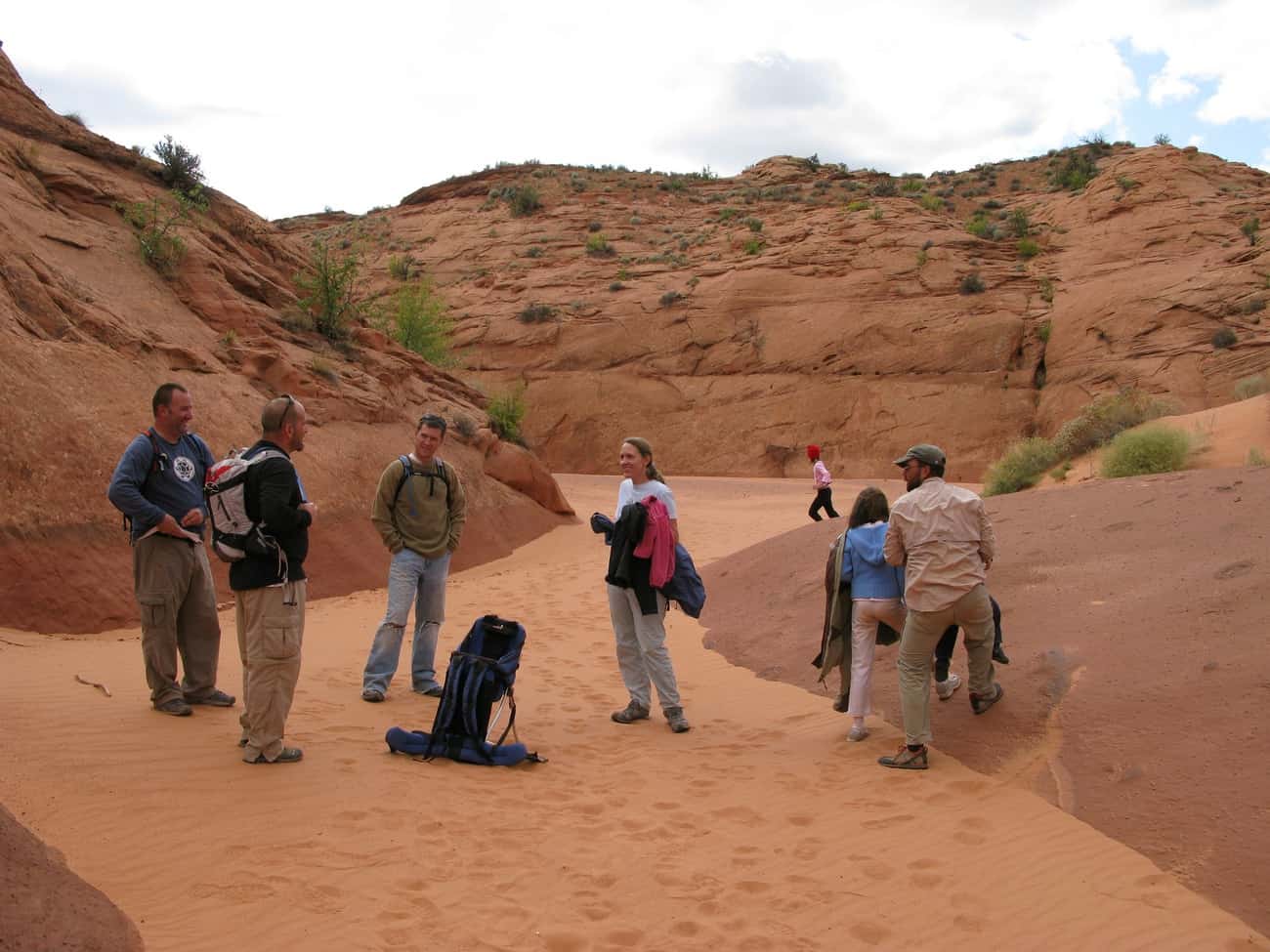 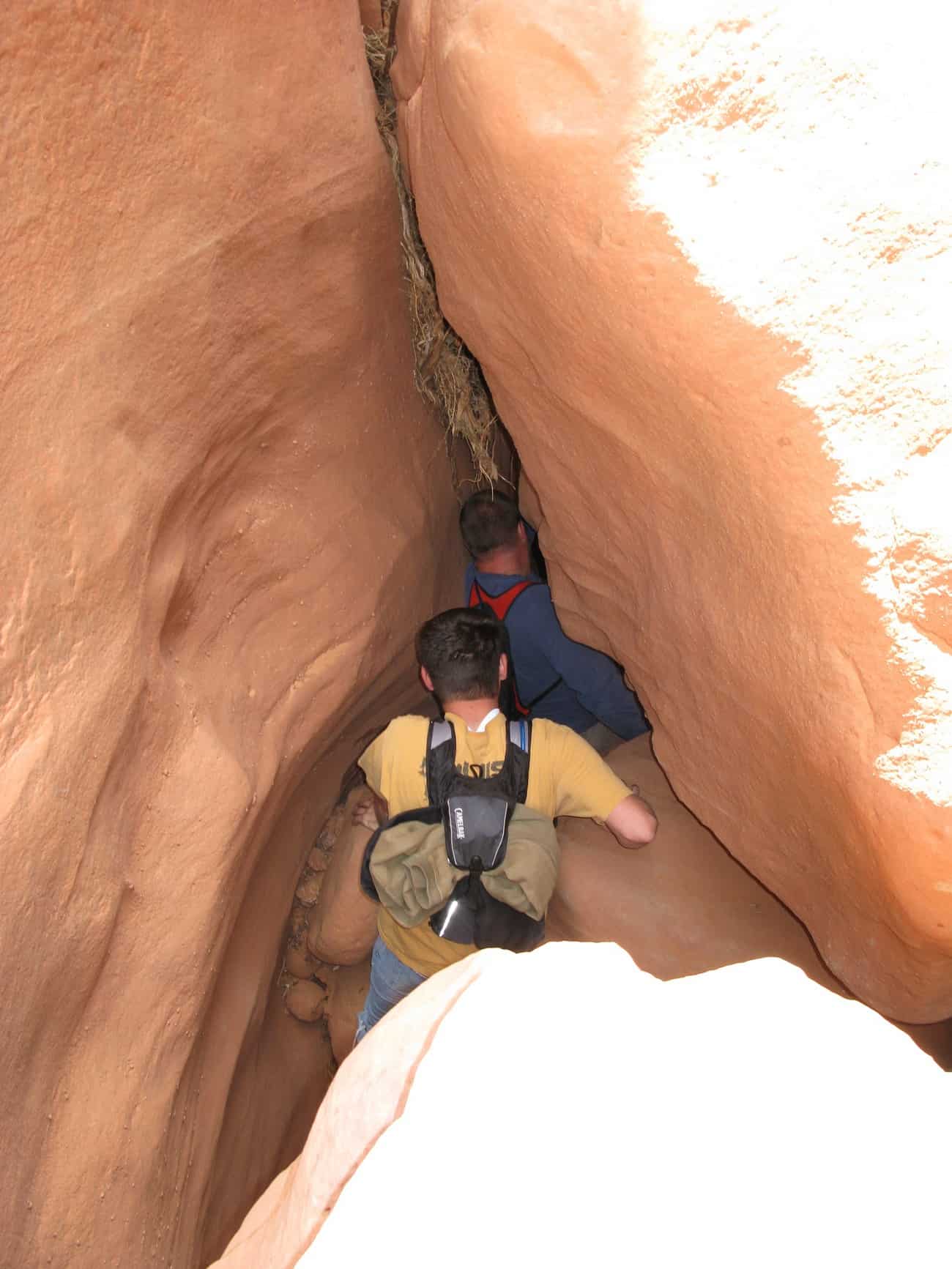 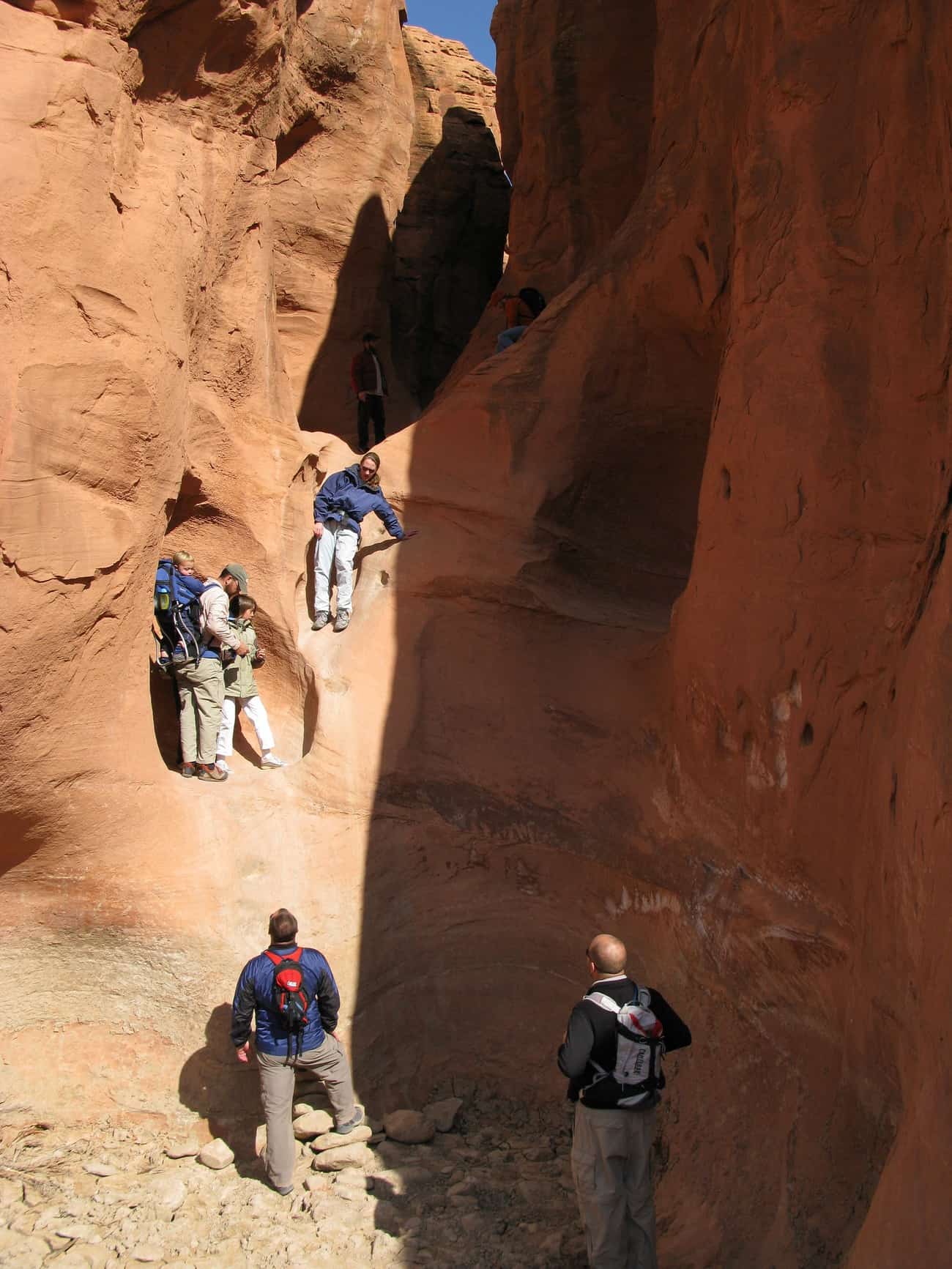 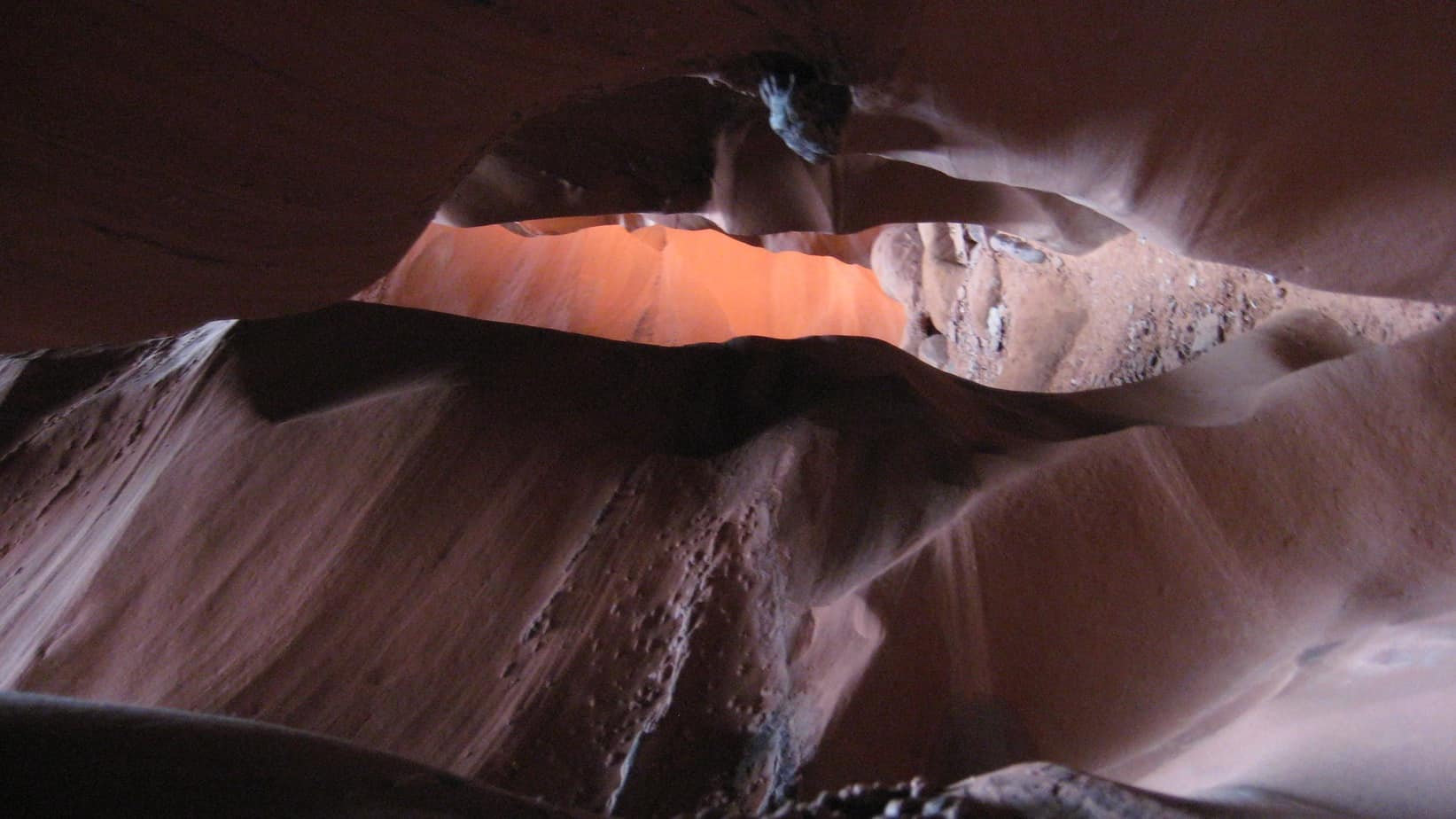 Once back at the cars we set out for home over Boulder Mountain and some of the most scenic two lane mileage in the country. Sun turned to clouds, clouds turned to snow, and by the time we got home winter had fallen on the Salt Lake Valley. An amazing trip that could never be repeated, as the canyon has now been re-opened on the county dime and passable by most SUVs. Few tourists wander that deeply into the park and those that do have no idea how great of an adventure was found by a few determined friends shortly after Mother Nature had reminded us of her power. There are few opportunities for hard core wheeling in the Parks and Preserves of the NPS, but if you time it right, and get the right person to answer the phone, you may just have a weekend you’ll never forget. 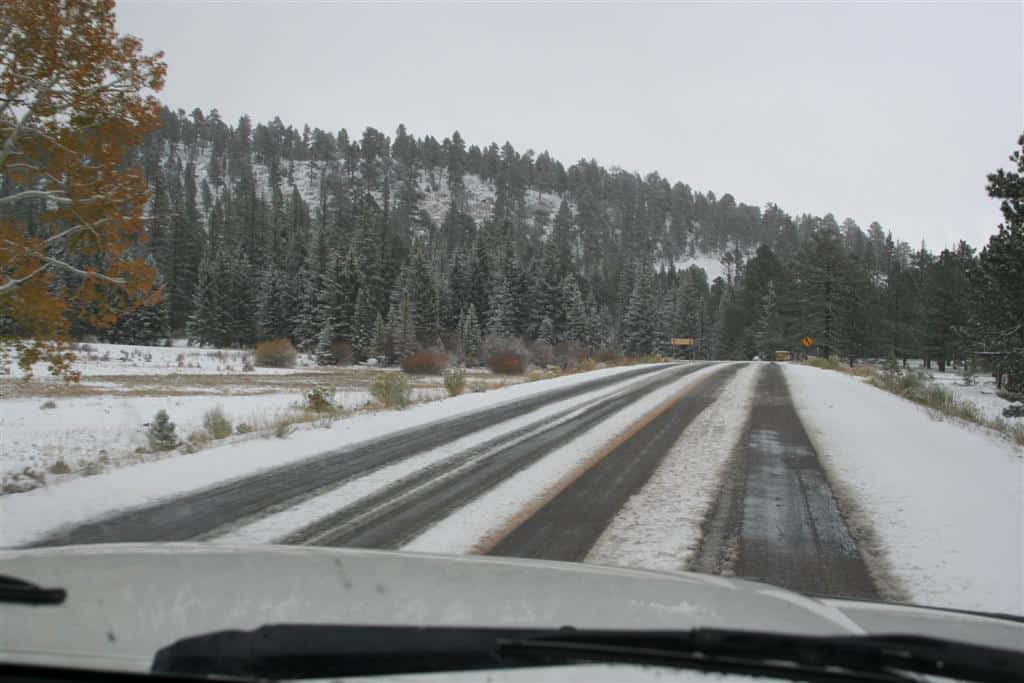 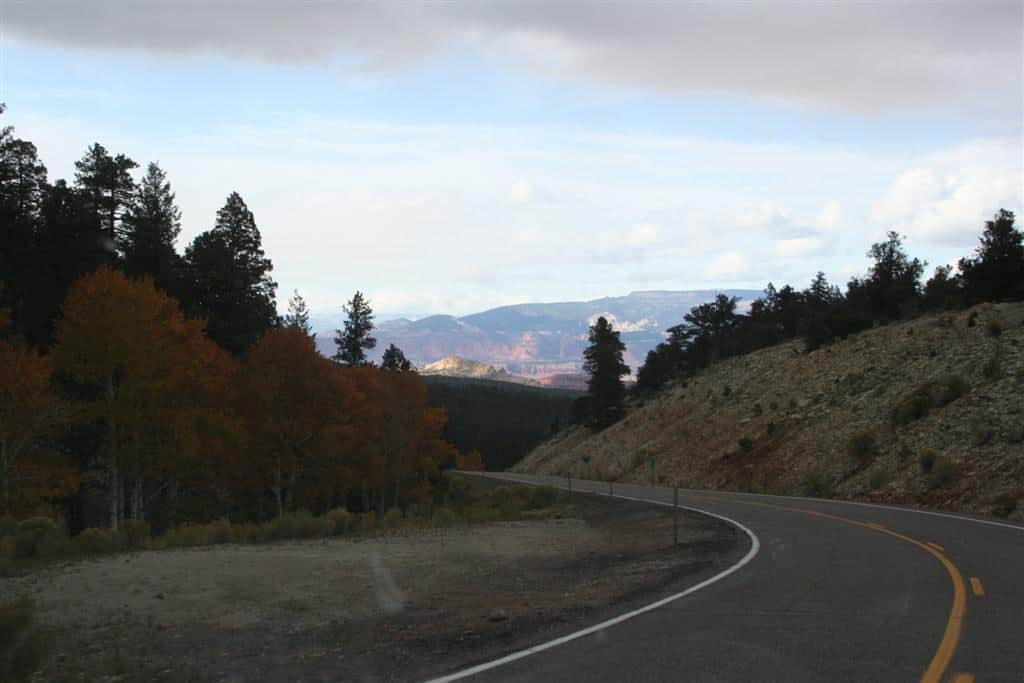 An enduring love affair with the desert fuels Dave’s desire to explore. Introduced at a young age to the beauty of Utah by his rockhounding grandparents and mountain climbing parents, his love of the outdoors is equally matched by a sense of adventure. Over the last 30 years, those adventures have taken him from Deadhorse to Ushuaia, the deserts of Africa and Asia, and even some cultural exploration in Europe. He prefers to travel solo but enjoys the company of like-minded travelers. Although his journeys have taken him around the world his favorite place to explore is Utah, and can be found most weekends out wandering the state he calls home.