We have seen our share of empty landscapes in South America: Patagonia, the Atacama Desert, Bolivia’s Altiplano—but all of them pale when compared with the Gobi Desert in Southern Mongolia (and stretching into northern China). The Gobi is intimidating—so immense and seemingly boundless, driving here was claustrophobic at times, making me wonder, worry even, if we would ever get out again, leaving me with a sense of being buried in a monumental vacuum of nothingness.

Rough Rides Through the Gobi

Meanwhile, the Gobi Desert had the Land Cruiser vibrating and rattling at new heights. Having left the main asphalt road that runs from Mongolia’s capital of Ulaanbaatar southeast to China, we were following an unpaved main road that cut southwest. As is often the case with such thoroughfares, intensive use has destroyed them with potholes and washboard. Whether we drove in the middle, the left side, or right side, there was no escape. The ruts got wider and deeper. Our bodies were almost shaken to pieces, exhausting us. Behind the Land Cruiser lingered long trails of thick dust, and around us, dust devils rose from the sand. A big one raged alongside us for quite some time. Unexpectedly it turned 90 degrees, right into the Land Cruiser and my open window. 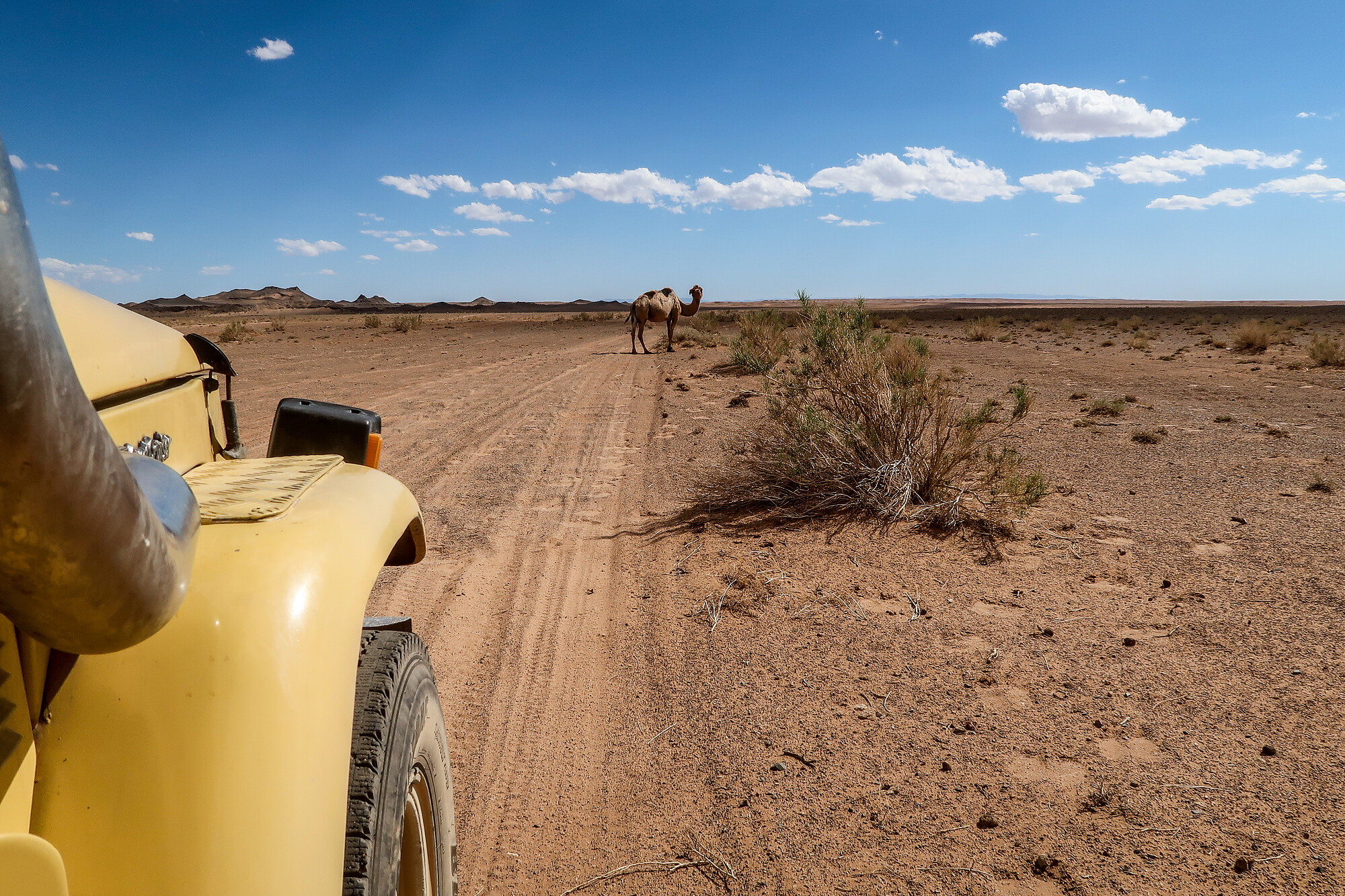 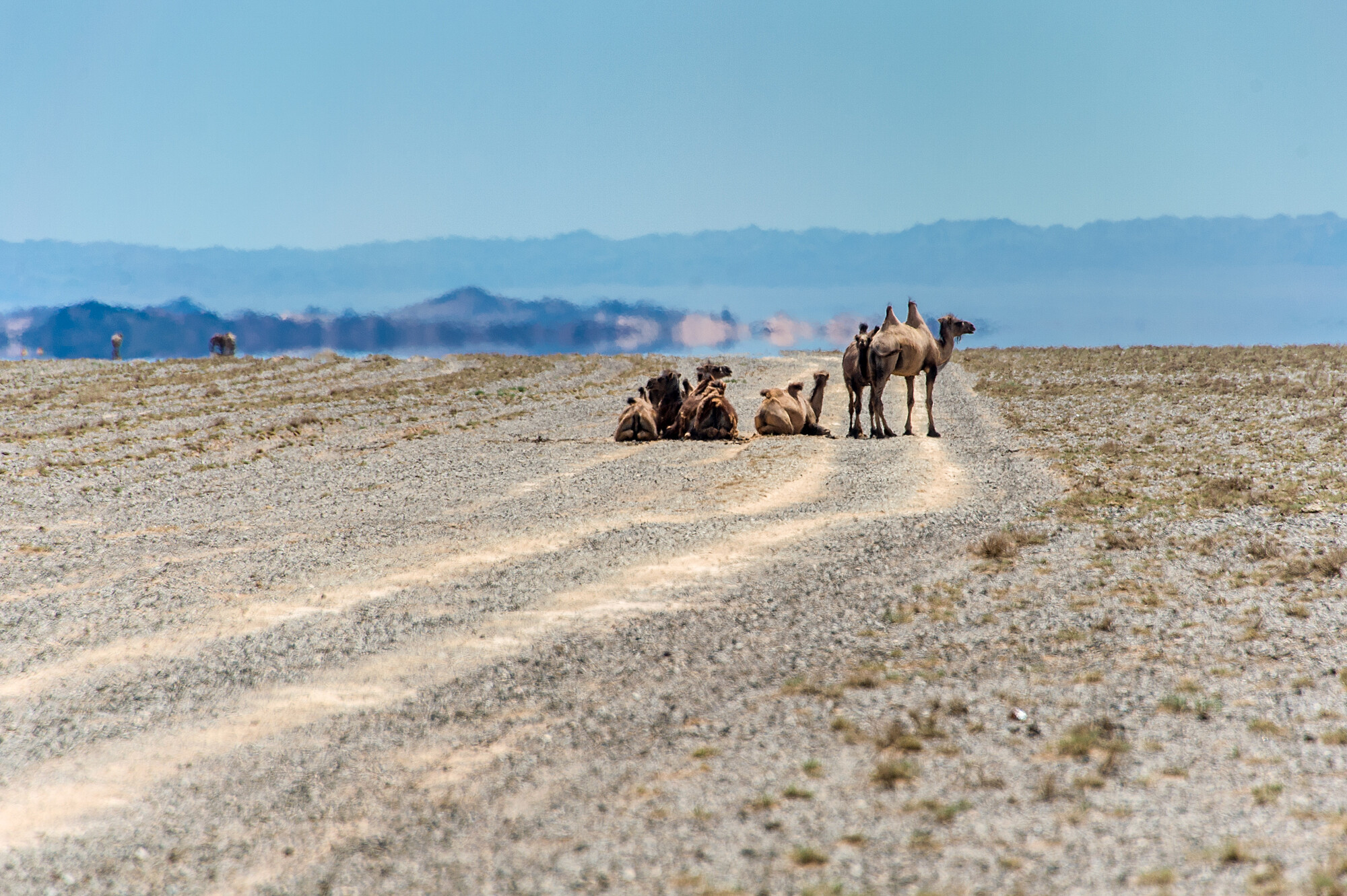 We were crossing a world of gravel, sand, thorny scrub with tough, almost stone-like short trunks. For a bit, we tried leaving the road and cruising straight across the plains. However, the scrubs were so tough that driving across them was like hitting a boulder. That evening we had a flat tire, and besides, it was better to stay on existing trails in order not to damage the little vegetation that this desert has. In some areas, there were dozens of trails. 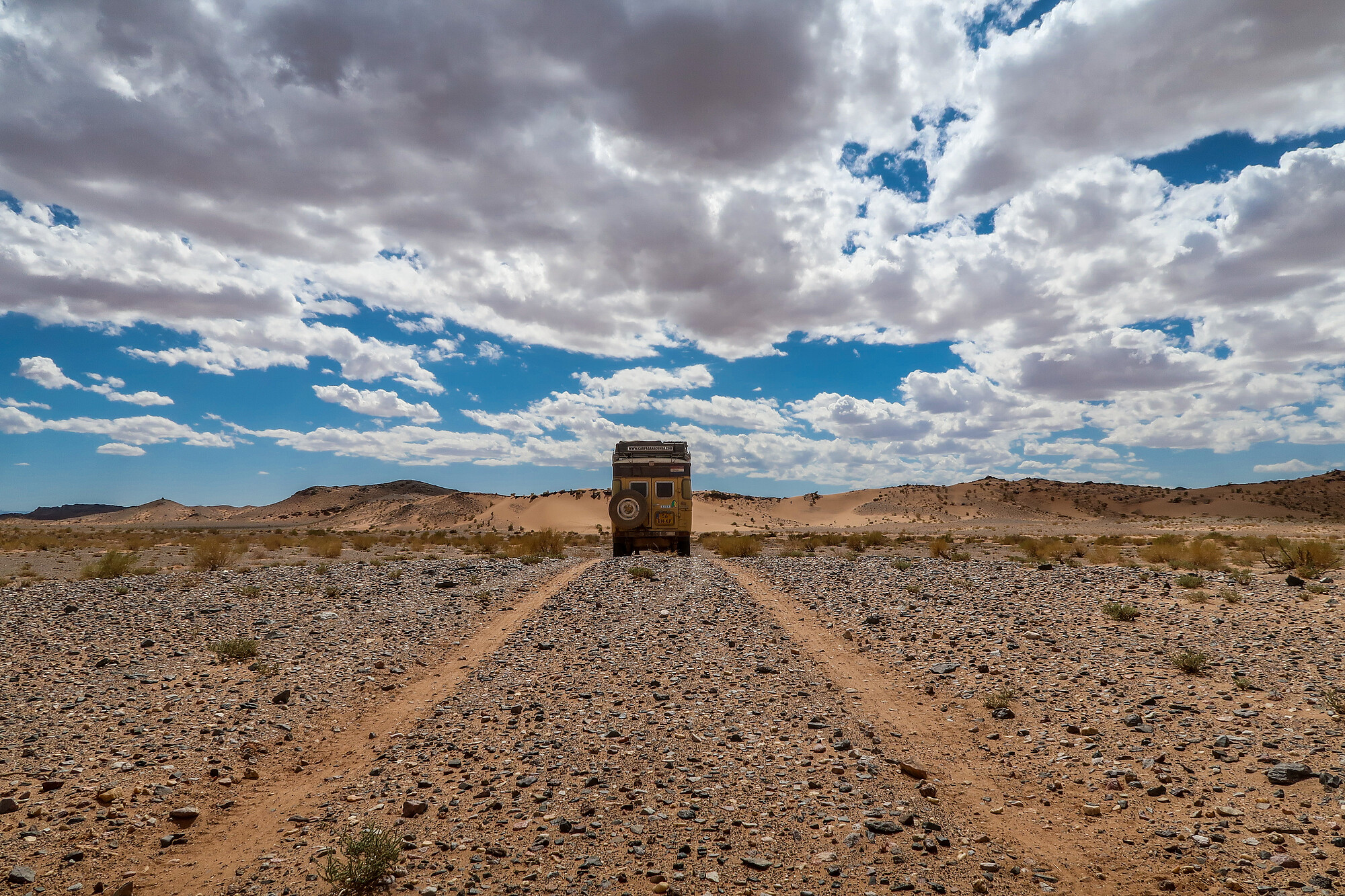 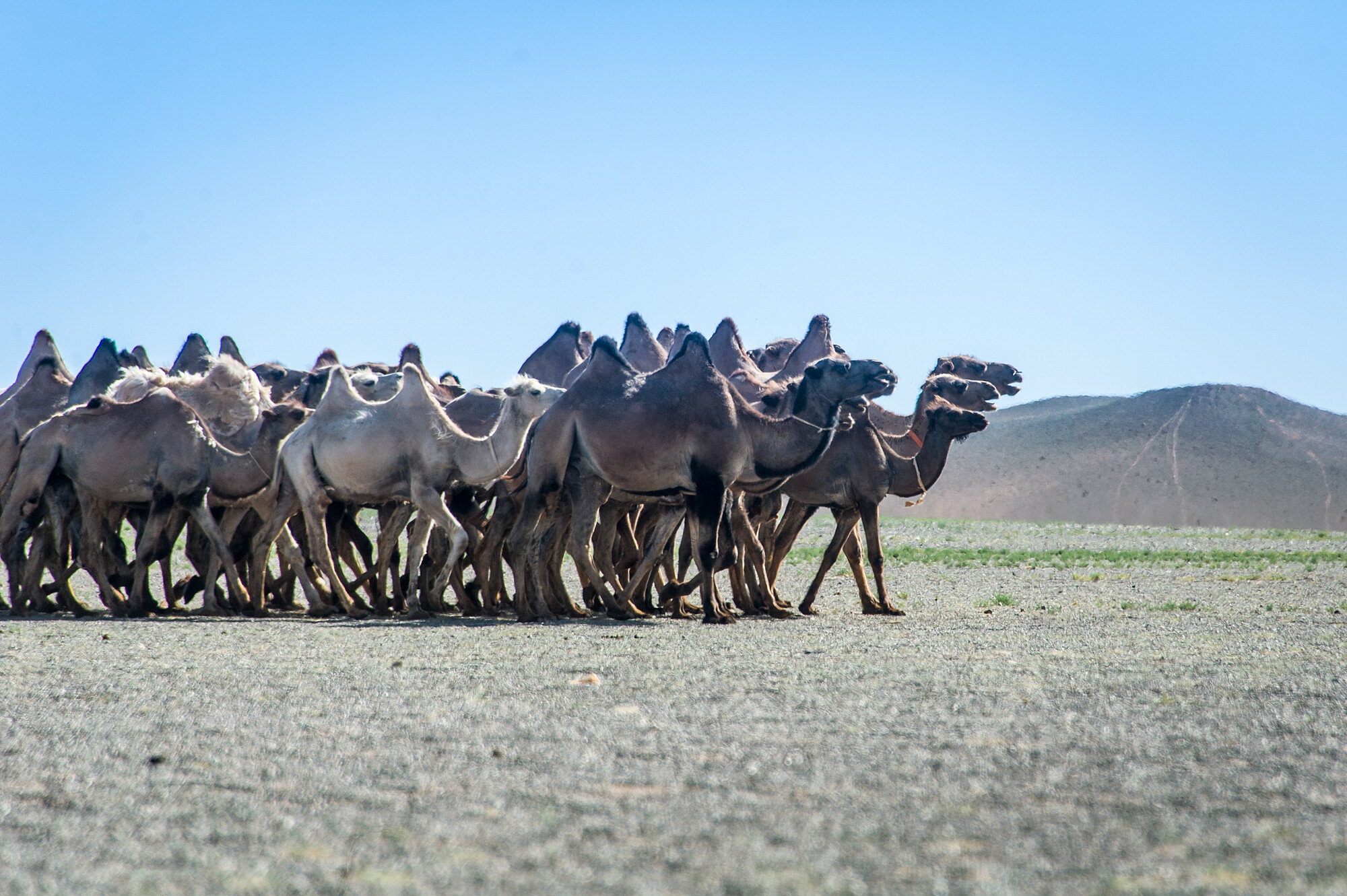 As, over the seasons, new trails are created and others disappear, many are not indicated on maps, and picking the right one is a gamble. In the wetter parts of Mongolia, this can cost you dearly, landing you in a swamp in the middle of nowhere. Here, in the Gobi during the dry season, there was no chance of that, and in the worst-case scenario, we deviated from our direction, having to backtrack or find a short cut. On a few occasions, we resorted to using our drone as a scout, which worked well!

Visitors in the Middle of Nowhere

Intimidatingly vast as the Gobi is, believing it to be empty is a mistake. You may not see them, but people are there, and they are watching. Among the most essential things Mongolian nomads carry are binoculars. They love to know what is going on in their surroundings, and we often saw them scouting the world around them. It might happen that we thought we were camped all by ourselves—our Land Cruiser being the only vehicle in the middle of nowhere. However, it never took long before we were spotted (feeling safe in Mongolia, we never bothered trying to camp out of sight, and I wonder if that would be possible anyway), and a car or motorcycle would come over. In the Gobi, shepherds often herd their animals on motorcycles rather than horseback, camel, or on foot. 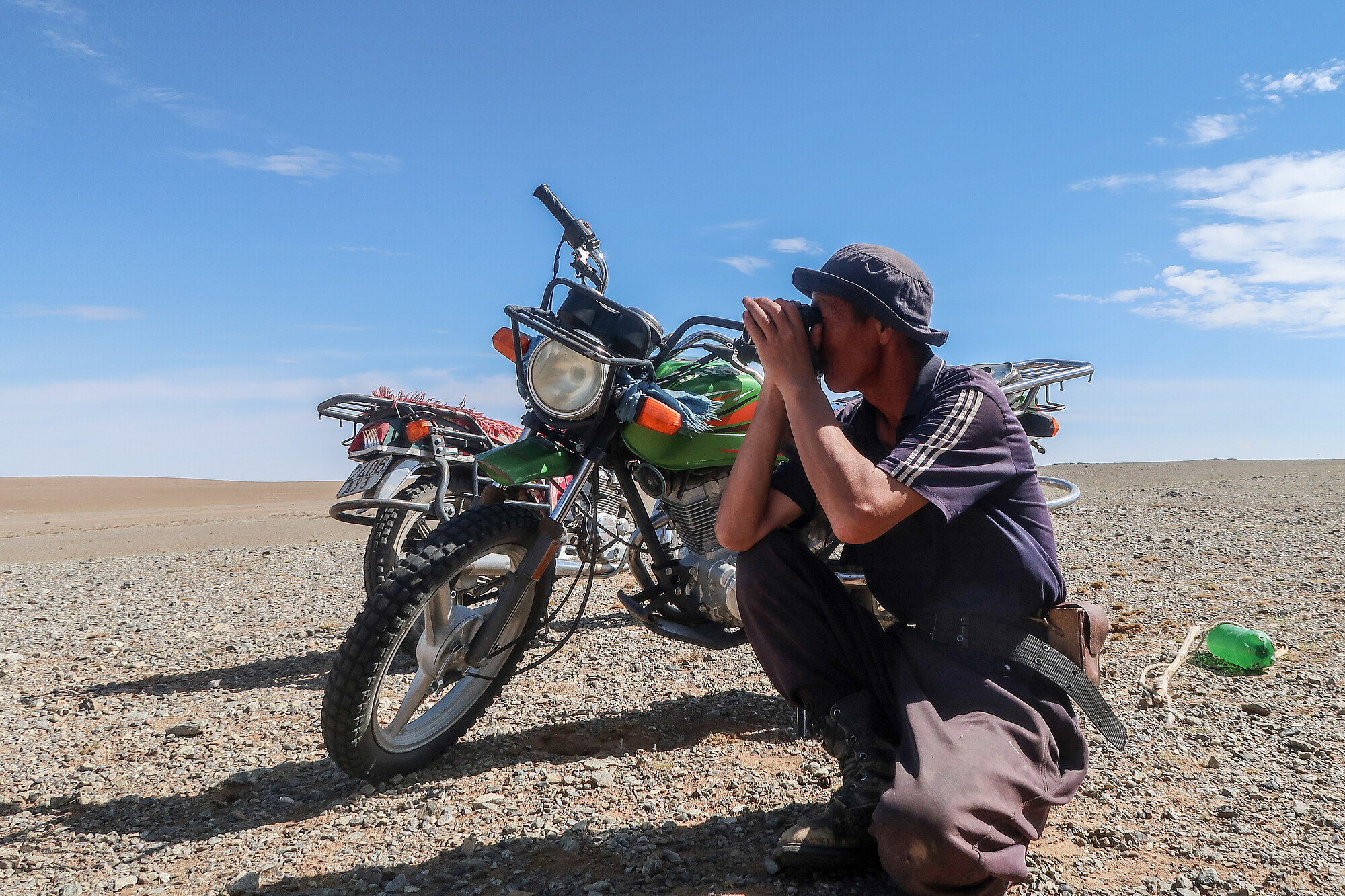 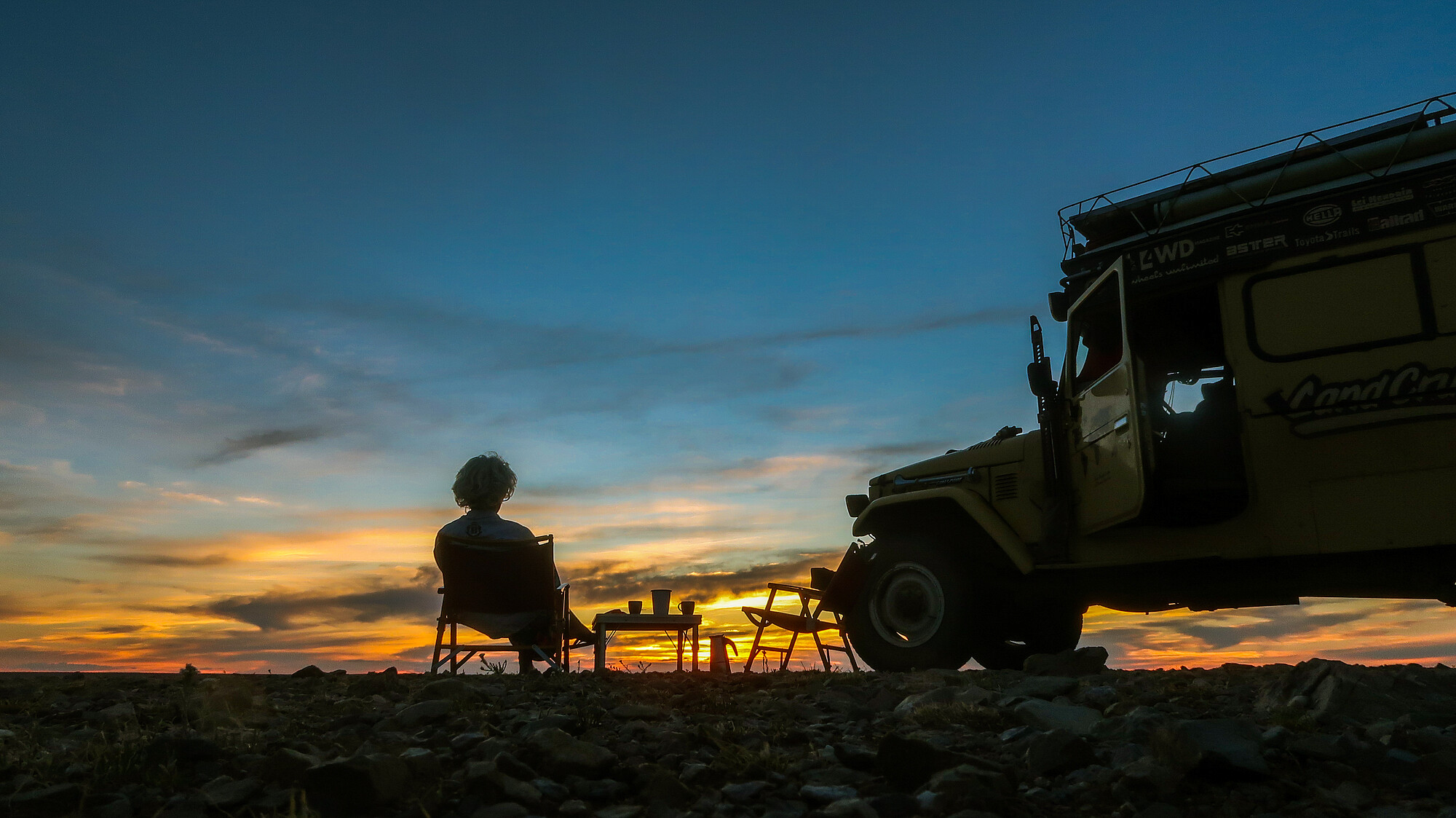 One evening we camped on a hillside. Within half an hour, a young man pulled up on his green motorcycle. He asked questions in Mongolian, not understanding that we had no clue what he was asking. He peeked inside the Land Cruiser, curious about these strangers. I always wondered what the Mongolian nomads made of us, overlanders with our (relatively) fancy cars and gear. I hand-languaged if he wanted coffee. Stupid question; of course he did. They all did, no matter where, when, how many, or what time, and over the weeks, I stopped asking and simply put the coffee pot on the stove. It was nice to be able to return hospitality rather than, as is generally the case, being on the receiving end of it. 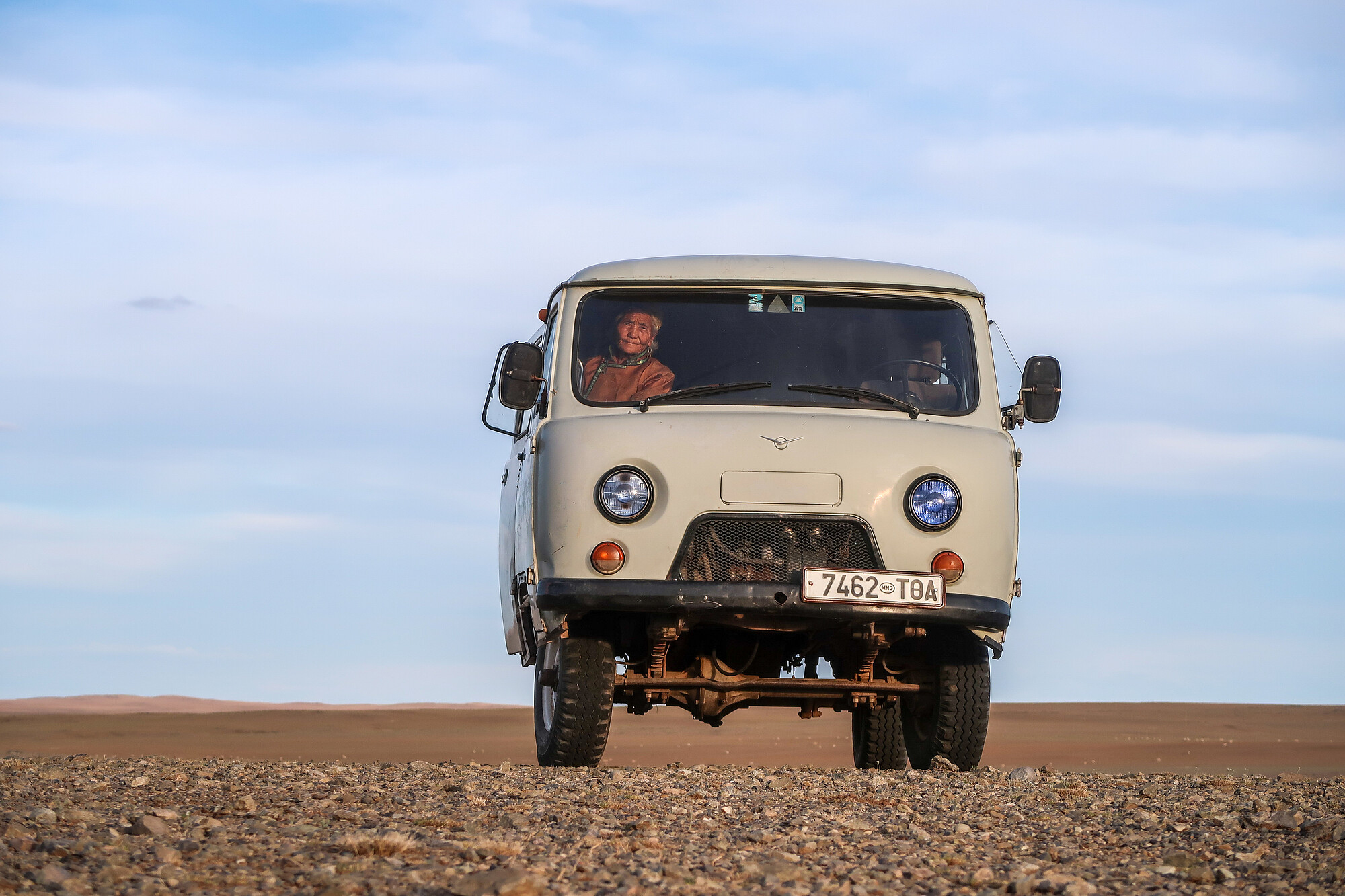 The young man sat down on the ground and was soon joined by a family who stopped by in a grey UAZ, the typical Russian car that is popular in Mongolia as well. A father and daughter got out, the mother staying in the truck with the grandmother. Father wanted daughter to ask us questions, but she was shy, probably having learned English in school but never having had the opportunity to practice. Father had had too much to drink, which visibly embarrassed his daughter, who tried to pull him back to the UAZ. “Come, let’s go.” But father didn’t want to go and instead sat down on the ground next to the Land Cruiser, his curiosity not yet satisfied. We brewed more coffee. The man was 50, he said, writing in the sand that he was born in 1970. Interesting, since I was 50 as well, however, I was born in 1968. But that would become too complicated a topic when not sharing the language, and instead, we nodded in agreement.

One of the things we needed to get used to, is that at some point, Mongolian guests (at least nomads) will get up and leave without saying anything. Since people need each other in harsh climates like the desert, yurts are traditionally open to travelers. You enter when you want, and in accordance with tradition, you can always eat or drink something and then depart without bothering to say so. Apparently, we foreign travelers are also welcome to barge in like that, but we have never felt at ease doing so (we did join them in a yurt for tea when invited). 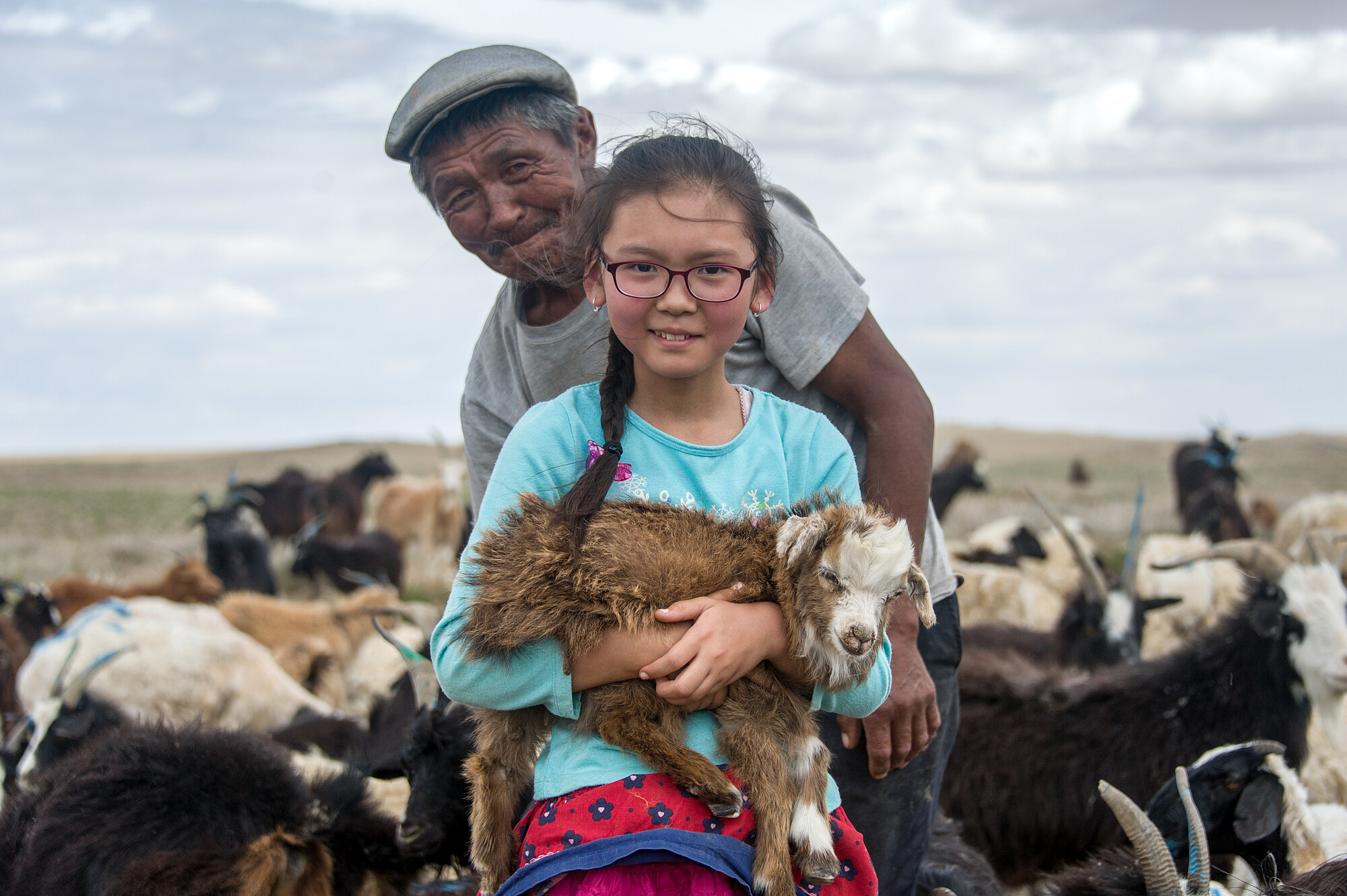 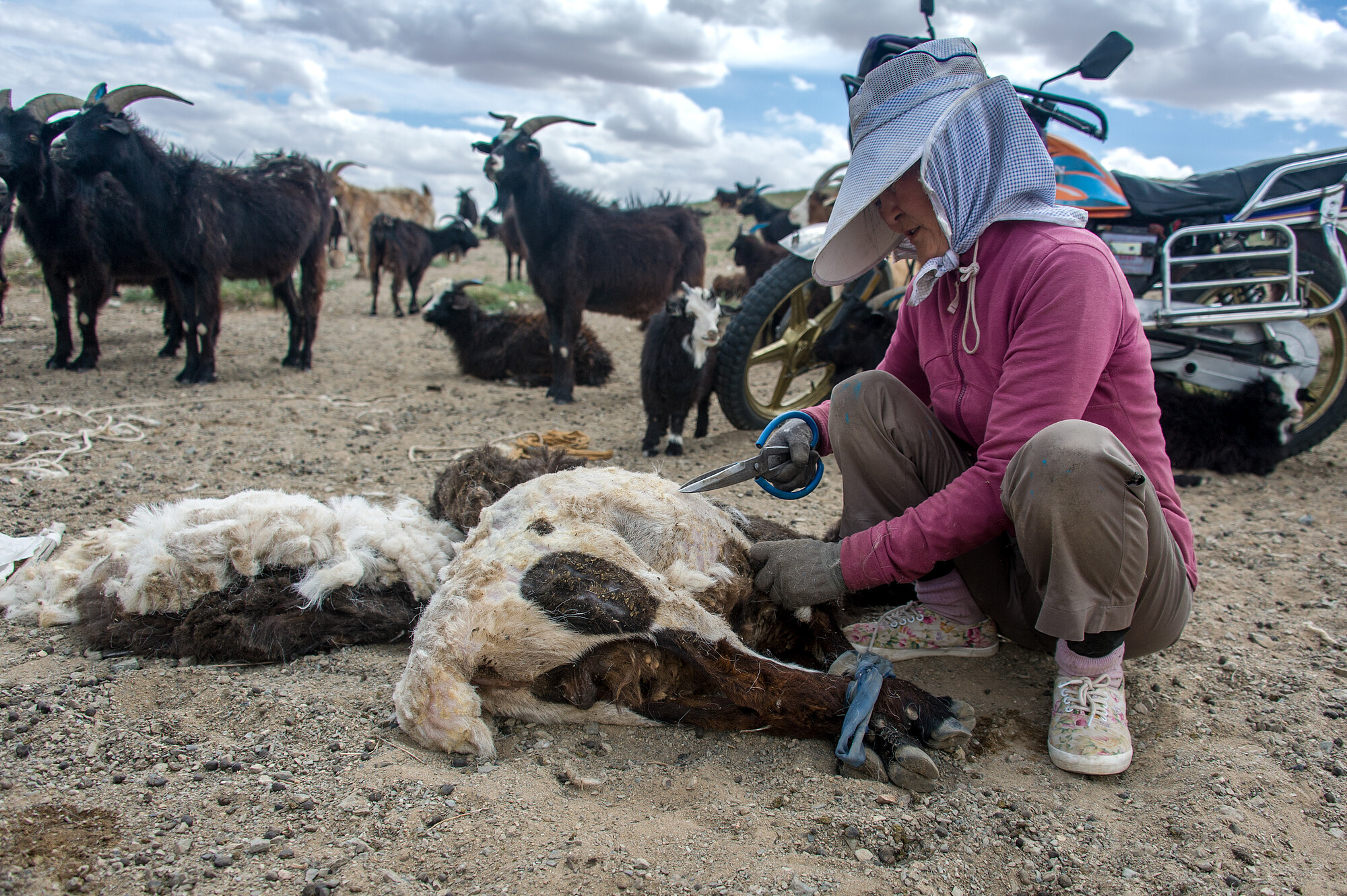 Nomads have lived in the Gobi Desert since ancient times, moving around with their yurts and herds of goats and sheep that feed on the sparse vegetation. We came across one of those herds that was being sheared. Hundreds of animals had gathered around a water well with their owners, a couple with their son and daughter, the latter cuddling a lamb. In the Gobi, numerous wells have been drilled, but shepherds carry their own pump to bring the water to the surface. While the animals drank their fill, they were picked out one at a time, their legs tied together and sheared by the woman. The men operated the pump and collected the wool in large bags. Wool is used, among many things, to make felt which is put on the sides (walls, if you like) of the yurts. That winter, we’d buy stretches of it to use as insulation in the Land Cruiser as we were going to drive in the Siberian winter, and it worked perfectly. 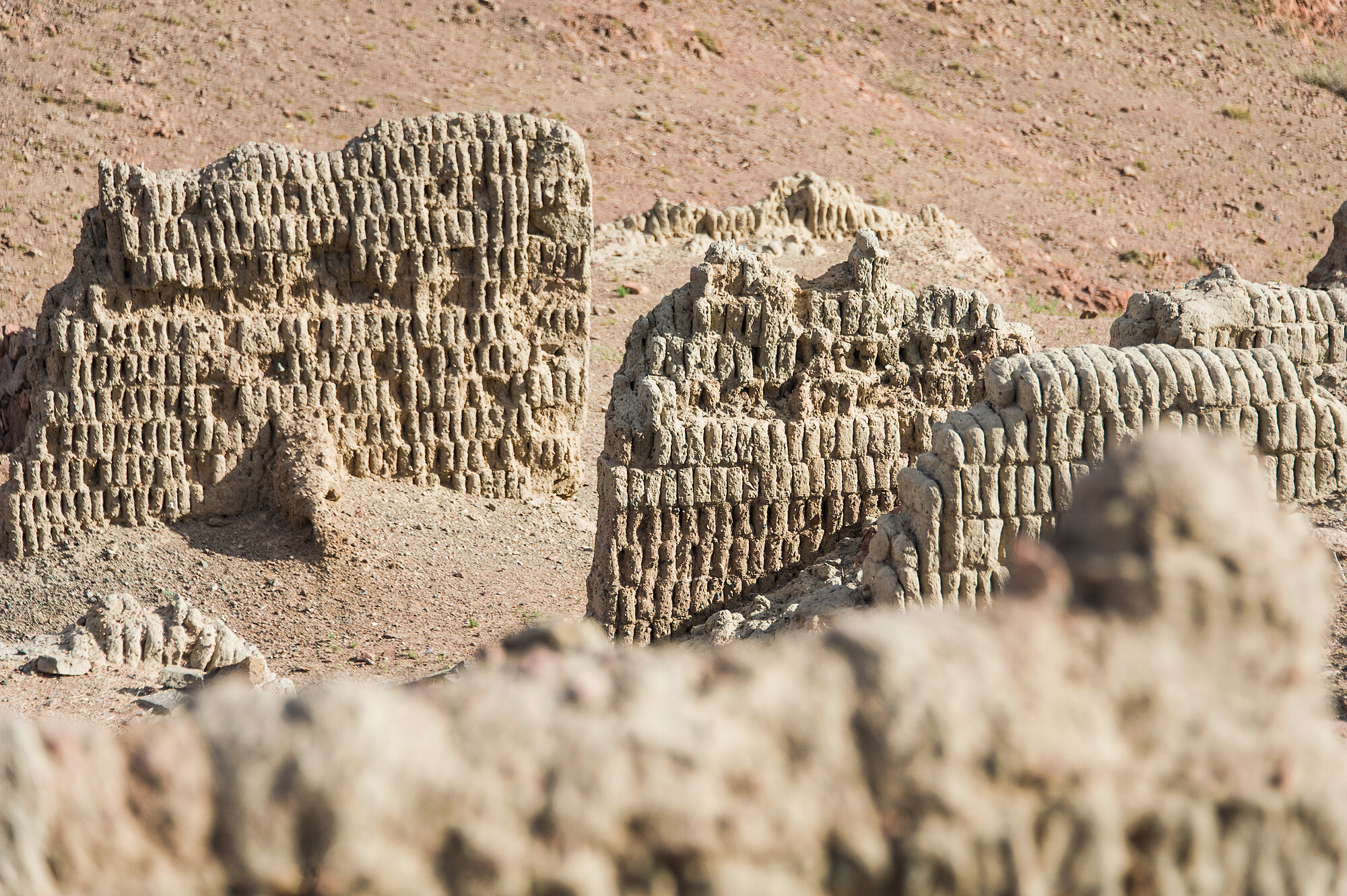 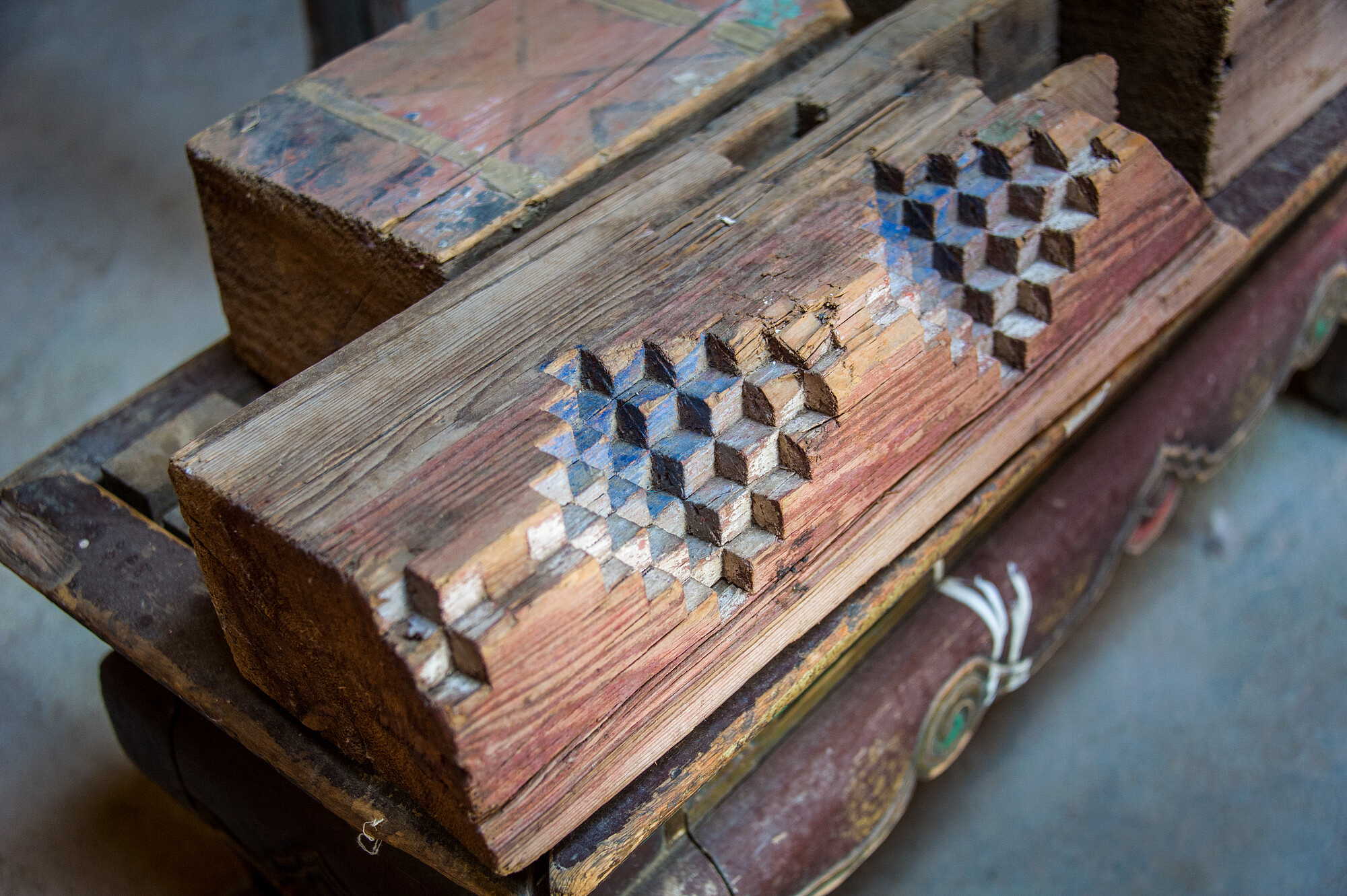 We said our goodbyes and returned to the world of emptiness. Every once in awhile, we’d come across traces from ancient times such as petroglyphs or monasteries. Once a thriving Buddhist country, the majority of Mongolia’s monasteries were destroyed under Stalin’s influence, reduced to piles of rubble that stand out in the countryside. One of the largest Buddhist monasteries in Mongolia, Ongiinn Khiid (Khiid = monastery), was once home to 1,000 monks before its demolition. These days, you will find amidst the remains of walls, a shop set up by a couple of monks who also built a small temple using the original beams from the old monastery. Among the handful that survived the onslaught was the 18th-century Geimpil Darjaalan Khiid, built to commemorate the first visit of a Dalai Lama to Mongolia and then home to 500 monks. By becoming a warehouse and shop, it was saved from destruction, and in the 1990s, it became a monastery again, being home now to a mere five monks. It’s a beautiful building with gorgeous carved and painted woodwork, an explosion of color amidst the yellow and grey surroundings. 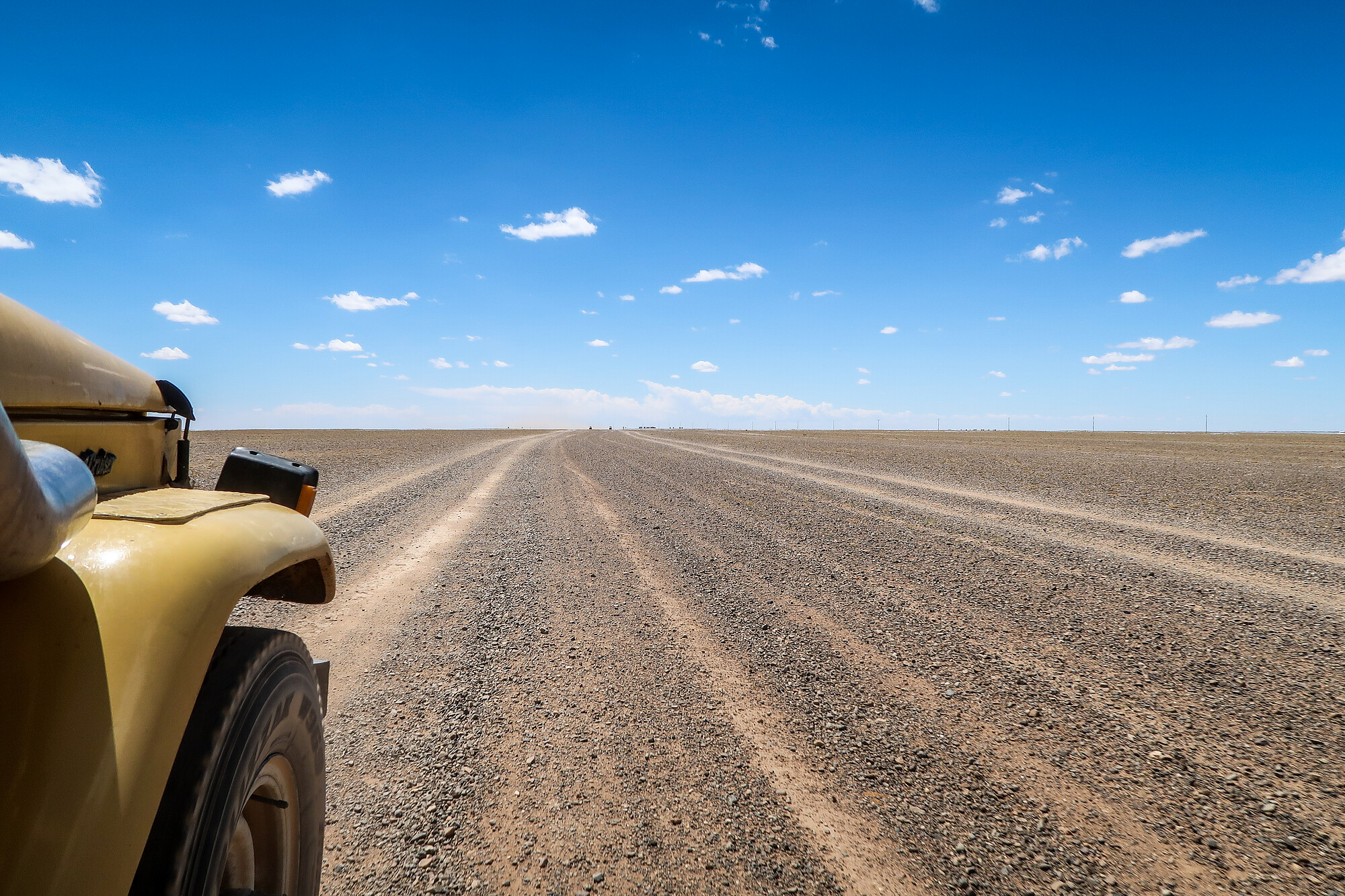 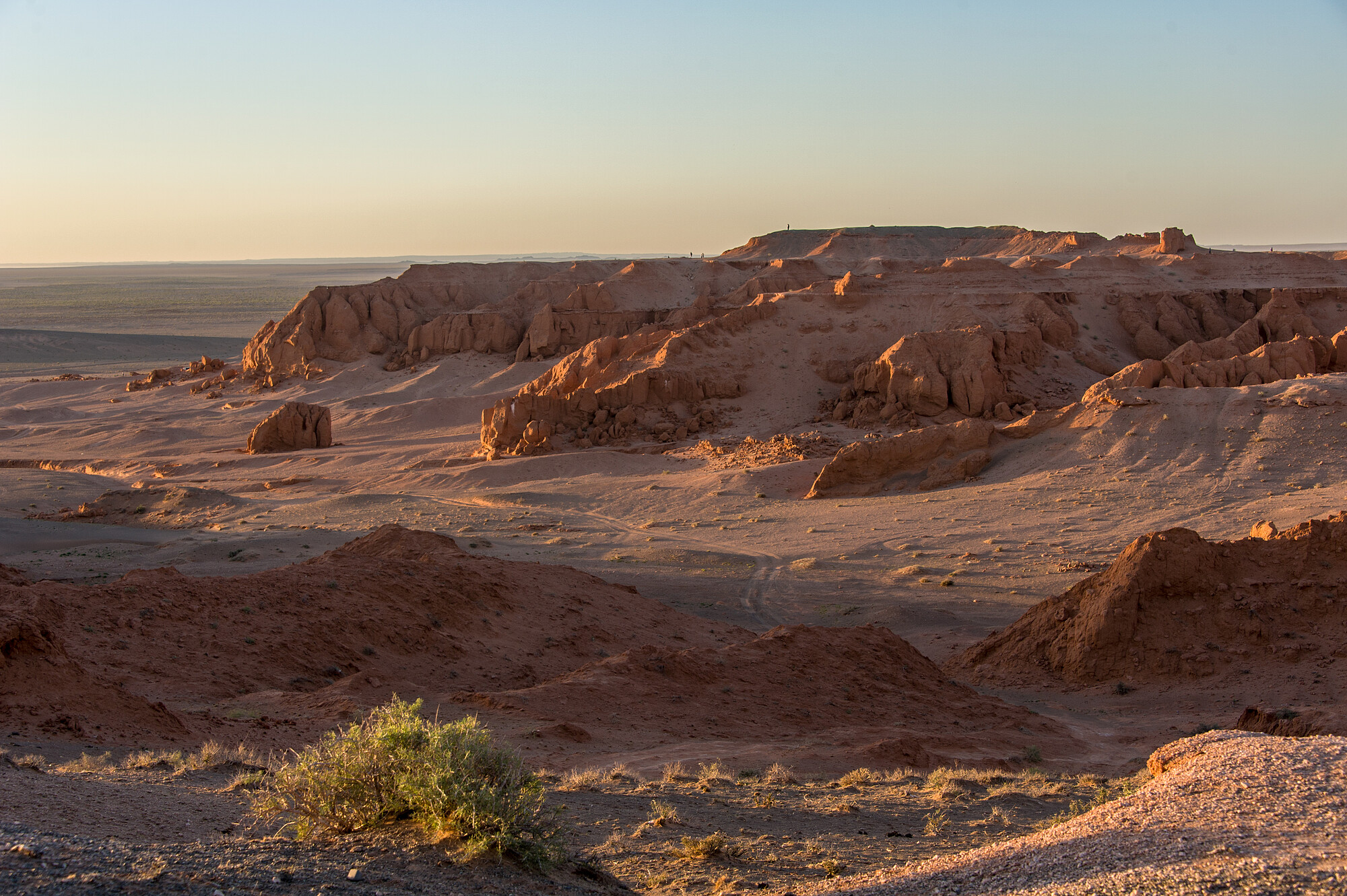 The goal of this road trip was the Flaming Cliffs of Bayanzag. It’s a popular place to stop for tour groups and overlanders alike, and understandably so. From the barren landscape protrude red rock formations, reminiscent of the famous canyons in the US (although no comparison in shape). Flaming Cliffs was the name given to the rock formation by Roy Chapman Andrews, an American who visited the region in the 1920s. For some time, it was an attractive place for archaeologists who found many dinosaur bones and eggs here. We parked on the upper side of the canyon along the edge to have a good view of the rocks that seemed indeed aflame in the hour of sunset, coloring bright red before disappearing into the blackness of the night. 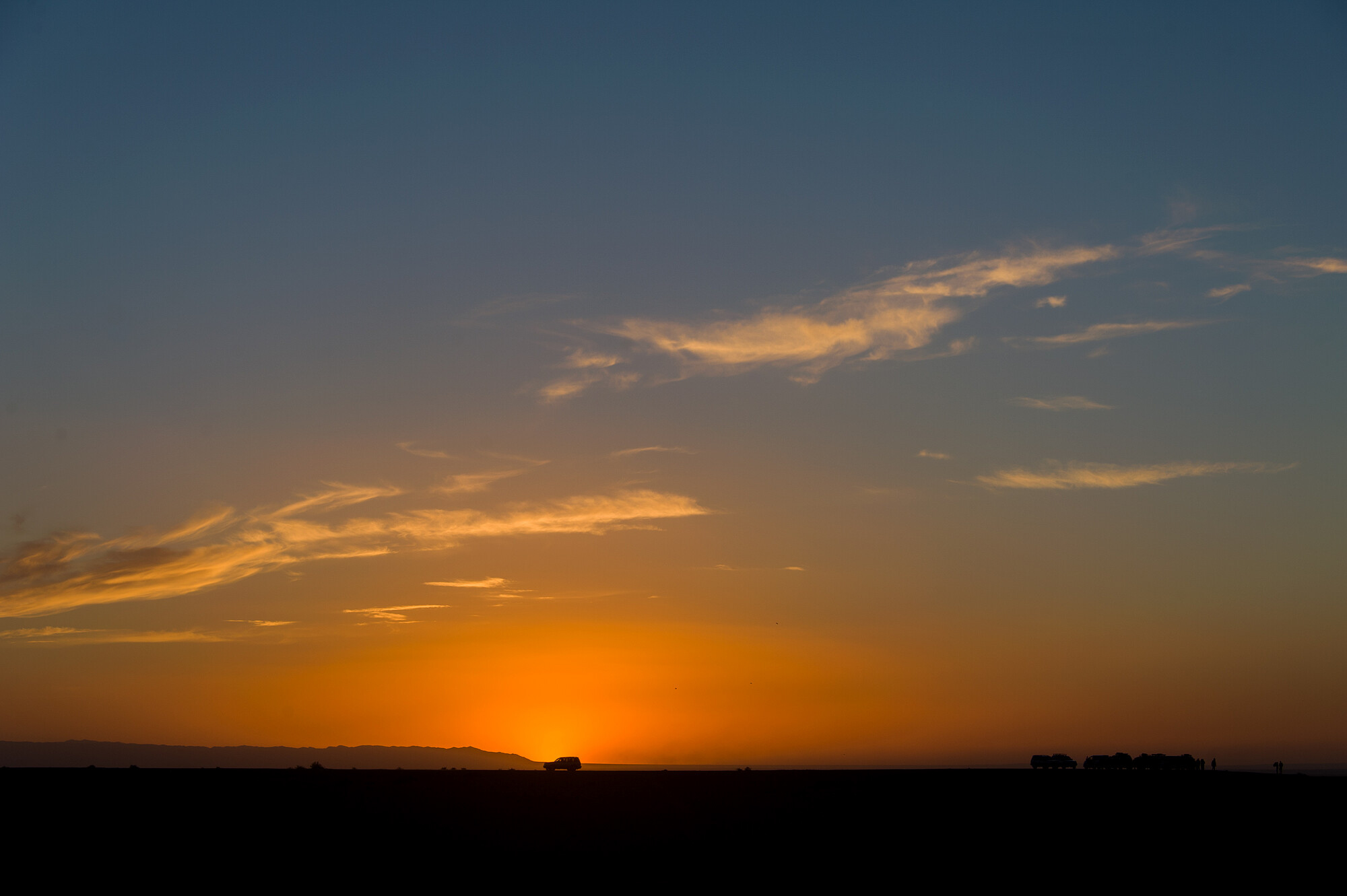 We had reached the end of this road trip but were camped in the middle of nowhere. Now we had to find a way to get out of this vast, empty Gobi Desert again. 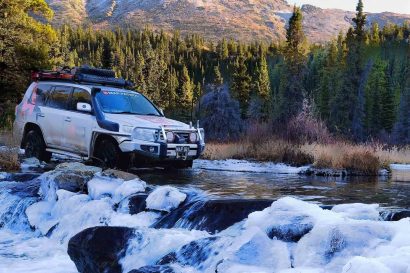 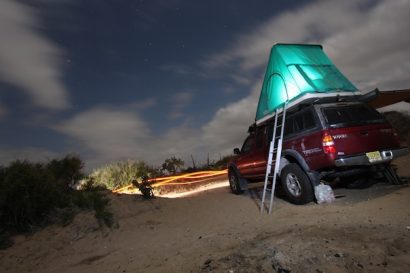 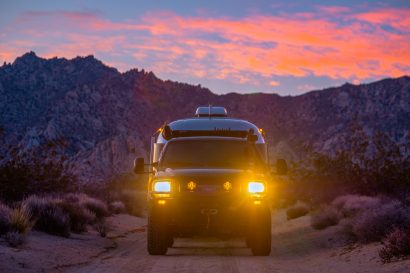 Ice, Snow, and Falls of Fire