If you haven’t lived here awhile you probably hear “Oregon” and think of its lush, rained soaked coast and stark volcanic cones. Though once you start poring over topo maps or fire up the engine and head east you realize that the entirety of Oregon’s vast eastern half is a rugged sagebrush desolation. It’s too hot, too dry, too boring. Definitely not worth the drive.

Unless of course you have the inclination to poke around. Every time I’ve steered east of the Cascade Range I’ve found something — or just as frequently not found something — that draws me back. Last spring Jason Britton and I from Limberlost teamed up with Donnie Kolb of VeloDirt to ride our mountain bikes across the Oregon border into Nevada’s Sheldon Antelope Refuge and then back to Frenchglen via Hart Mountain. It was an eye-opening trip. (Route details here.) 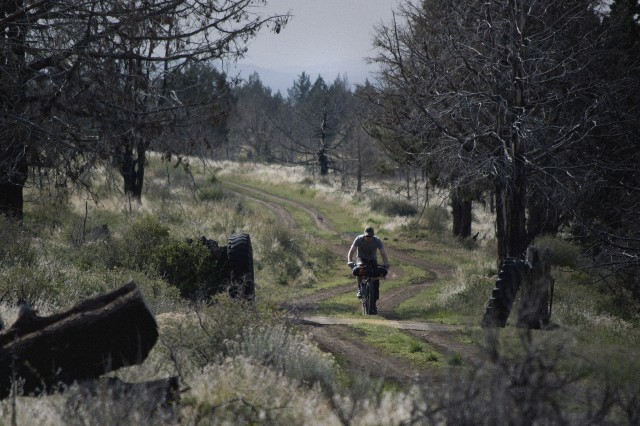 I wanted more. More antelope, more hot springs, more abandoned ranches, more sunsets over dry lake beds, and more secret glades in high desert ravines. Donnie, being the expert route sniffer that he is, was also on the case. He cooked up a route that followed forgotten military roads over Steens Mountain, across the Alvord Desert, and through the Big Sand Gap to Willow Hot Springs. Nick Sande from Cielo was also on board and showed us a video of an upside down lake that we needed to find.

We couldn’t dig up any information on the mountain pass, and were banking on snowmelt for water. The playa conditions could drastically vary even with the slightest rain. The only report we could find of the Big Sand Gap was “Big,” “Sandy,” & “Gap-ish.” We knew Willow Hot Springs were nice but once we continued into the Trout Creek Mountains would we encounter impassable snow at 8,000′ this early in the season? Could we carry enough — but not too much — calories for 4 days of riding without resupply?

There were a lot of variables both planned for and unexpected.

Each of us were well-seasoned bike travelers and all had stoic adventure bikes with 29+ wheels— a factor Donnie had designed into the route. I heard him say: “If I can see a squiggly line on the satellite maps, I can ride it with this bike!” And frankly it’s more or less true. I had ridden my loaded Krampus all across Idaho last summer on the Idaho Hot Spring Mountain Bike Route and over the famous Oregon Dunes and central Oregon snow in November. 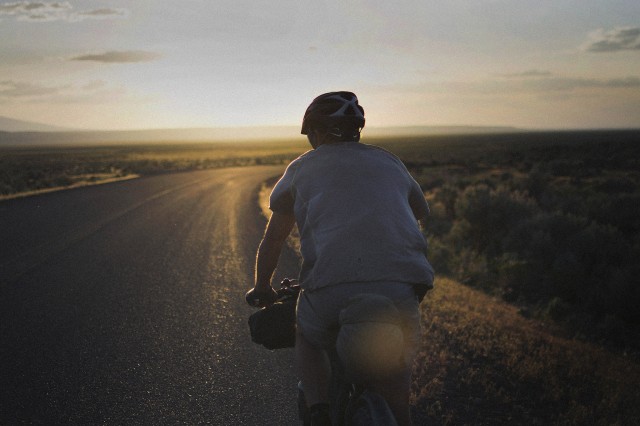 Our first day began with a hearty communal breakfast at the historic Frenchglen Hotel exchanging drastically different vacation itineraries with the many birders that had convened on the Malheur Wildlife Refuge for the spring waterfowl migration. They were a courteous, easily distracted bunch whom no doubt thought we were insane. After 30 easy gravel and asphalt miles on the bikes we were surprised by an oasis in Diamond. Even though they only boast a population of 5 we were served some of the best tasting food and cold beer I’ve had anywhere between Bend and Boise. Leaving Diamond we progressed at a much slower, yet satisfied pace. Slowly we climbed the gradual western flank of Steens Mountain past curiously skittish herds of the wild Kiger Mustangs and abandoned hunting shacks before pulling into camp on the side of our cow path in Paddler’s Meadow. As we lay down our rigs we were treated to a glorious sunset on one side as the swollen full moon rose into the twilight on the other. 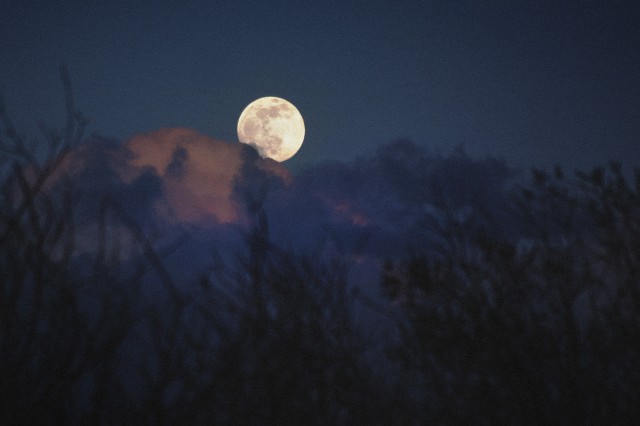 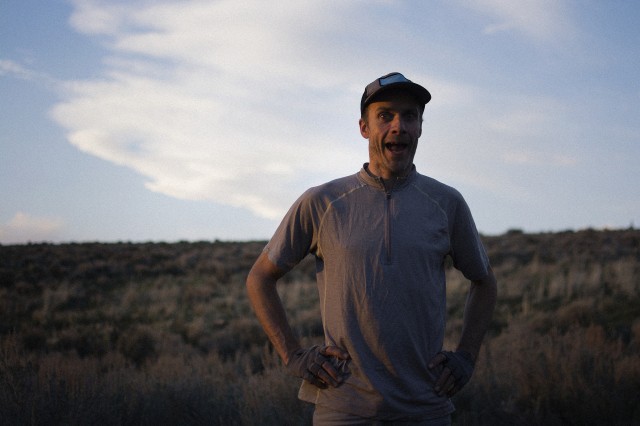 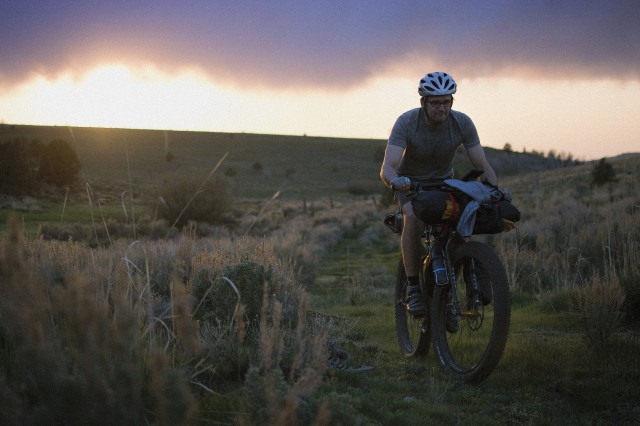 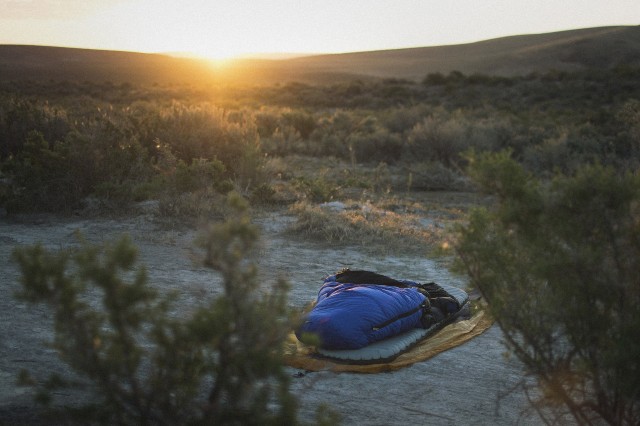 Awaking sluggishly before the sun we quietly went about our morning rituals waiting for the first rays of sunshine and Stumptown coffee to soak in. The eastern flank of the Steens is the opposite — almost immediately after leaving camp we crested and descending the blisteringly steep Stonehouse Road. We dropped the 2,500′ it had taken us most of the previous day to gain in about 15 minutes. And then we rode south, along the base of the mountains for 30 miles, enjoying stunning views of snow-covered ridges high above us before some warm whiskey, an afternoon siesta in some shade, and a brisk bath in the shallow waters of Pike Creek. 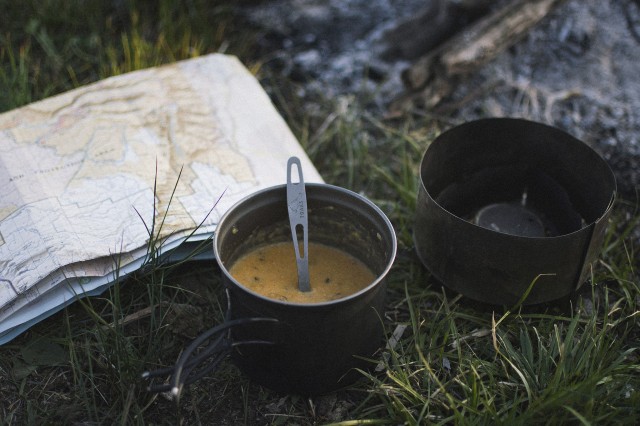 Ahead of us was the 8 mile overland crossing of the Alvord Desert. Riding across the playa is one of the most surreal experiences I’ve ever had on a bicycle. The scale is impossible to grasp even when on the desert floor itself. It’s perfectly flat, dry, hard, smooth. We took the short way across — the lunar landscape stretched 21 miles north to south. No words I write here would do the experience justice: go ride it.

But then the carnival ride was over and the playa highway literally fell out from beneath us and turned to deep sand. Yes, the Big Sand Gap lived up to its moniker. It was unrideable, so we got off and pushed our heavy rigs, trudging for 2 miles until the vague path leveled back out onto a nice hardpack with no discernable tracks from recent humans. We eventually met some cattle and zig-zagged along piecemealed fence lines (only getting lost once) before rolling up in the purple dusk on a very surprised and very nude couple of old timers at the Willow Hot Springs. It had been a long, shadeless day and we were ready for a big meal and a hearty soak. Not to mention a some trepidatous mulling over the big climb into the Trout Creek Mountains the following day. 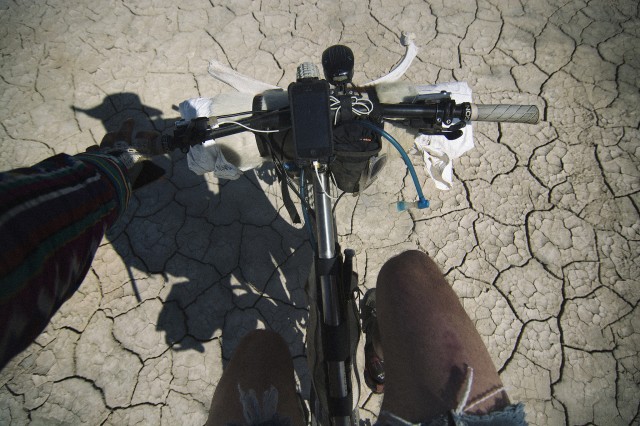 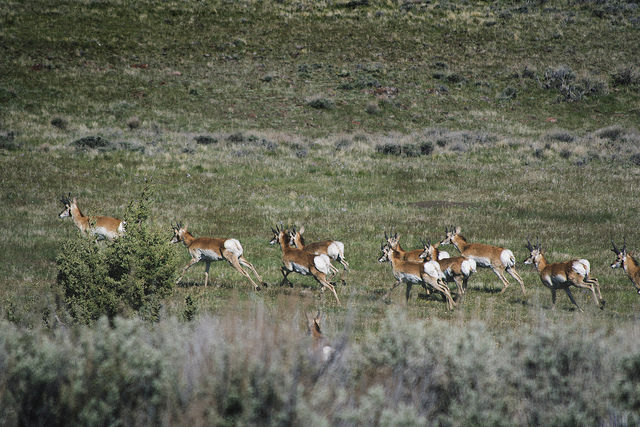 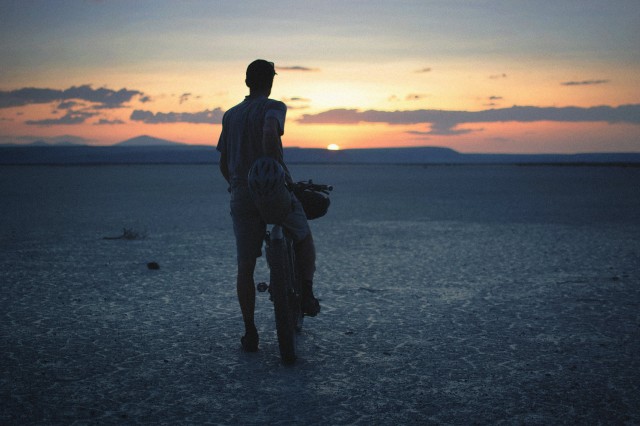 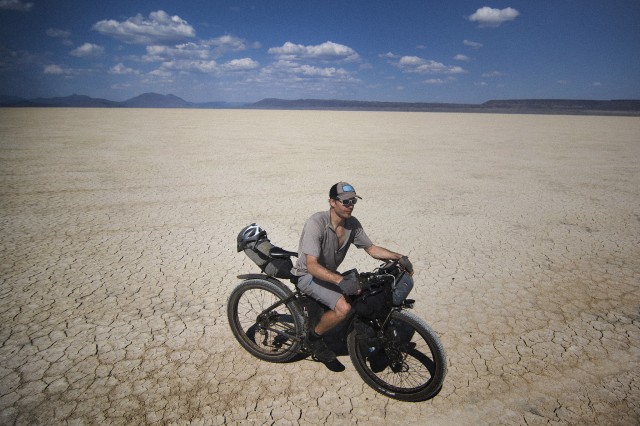 Upon waking we discovered a major mechanical: my tire’s sidewall had separated from the bead and the tube was dangerously bulging out. We made the call to limp 80 miles back to Frenchglen instead of venturing any deeper into the wilderness. We got to Fields midday and gorged on their famous burgers and shakes. And then Hopworks beer (and another) in the parking lot while we tried to thumb a ride. Soon we realized hitchhiking isn’t a great option if there’s only one vehicle every 30 minutes. The sun was going down again and we had almost begrudgingly re-mounted our weary steeds when a young, bearded vet “Ray Ray” with a Glock on his hip offered to give us a lift up the pass in his truck. His truck turned out to be a Bronco whose back didn’t open. But Ray Ray wasn’t deterred, he threw our bikes on the roof and hood, tossed a rope over them and instructed us to hold the other end as his truck sputtered up the mountain. Ray Ray all the while nonchalantly smoking a cigarette, brandishing his pistol, drinking out of a suspicious pint glass, and mostly forgetting to hold his end of the rope while down shifting around blind corners. He saw a jackrabbit and Donnie was frantically instructed to load the Glock’s clip as I eyed the numerous empty ammo boxes and beer cans. Somehow all of us, the bikes, and even the jackrabbit arrived at the summit alive. 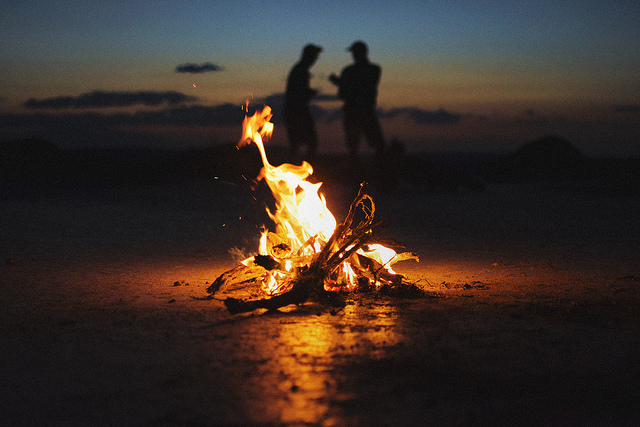 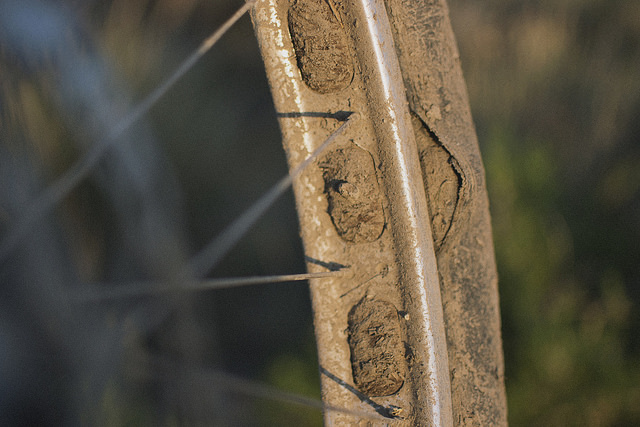 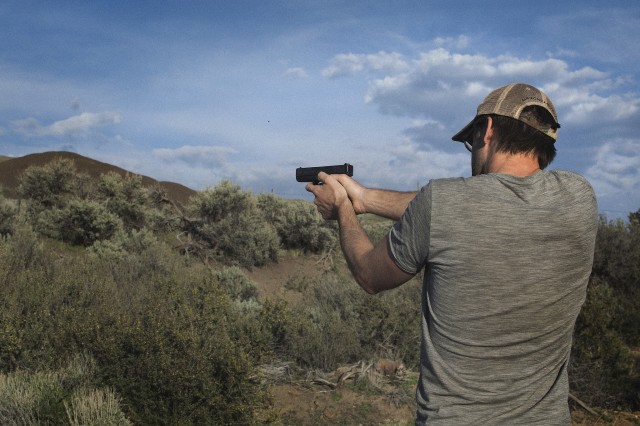 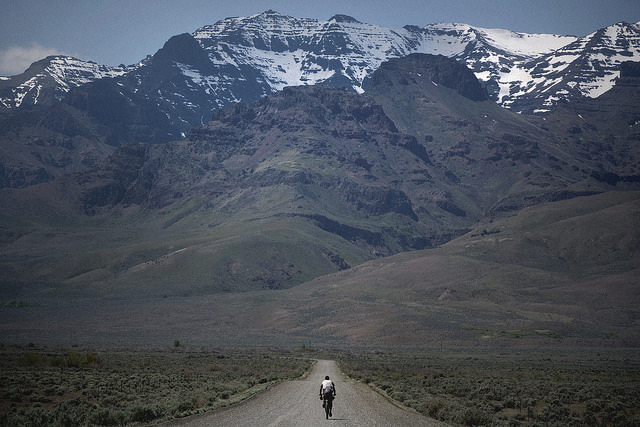 Well except for the Bronco. “No matter what, even if he’s your best friend don’t let anyone borrow your rig! That’s the first rule of Fields!” Ray Ray emphatically instructed us while cursing the billowing steam and dripping coolant. Seemingly the cure was more cigarettes and booze — and who were we to argue — we ain’t from around here after all. So we sat there in the middle of the highway in the emptiest corner of the state and emptied clip after 9mm clip into an old propane canister while Ray Ray rolled his eyes at our marksmanship and waited for his engine to cool down. 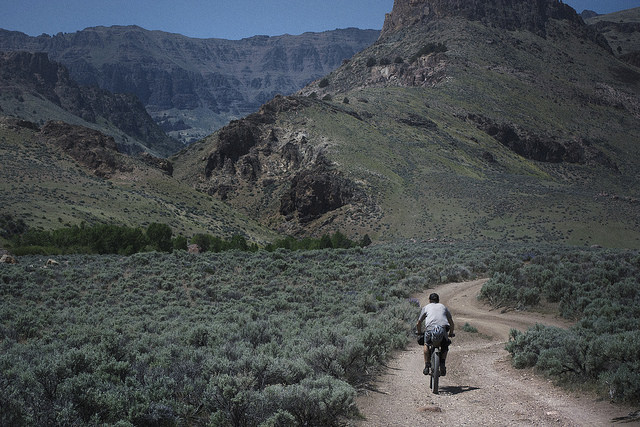 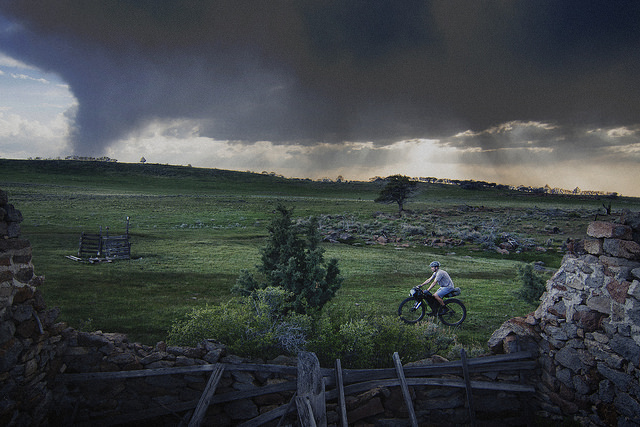 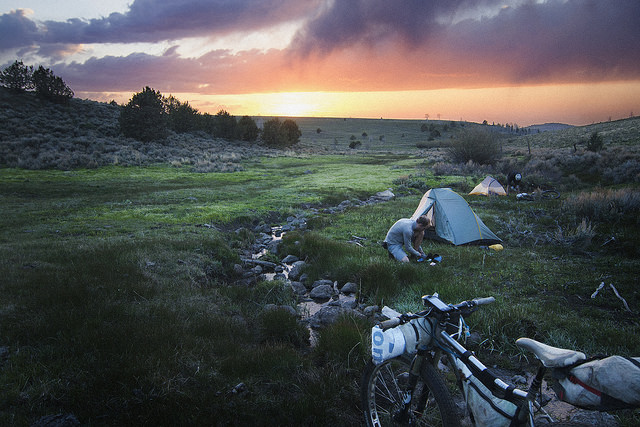 Eventually we parted ways and bombed down the car-free and tumbleweed-littered pass into the blindingly golden sunset with huge grins, ears still ringing and brain still buzzing realizing that the best things happen after you’ve let go of your itinerary, rules, and comfort zones.

I can’t wait to back and find that upsidedown lake.

You can find more reports of incredible wheeled adventures at: www.limberlost.co or click on the Limberlost banner below.

Gabriel Amadeus is exploring the world one serendipitous misadventure at a time. Born in a canoe in Michigan’s Upper Peninsula; learned what good beer was in Duluth, Minnesota; and fell in love with the grandeur of Oregon ten years ago. He’s been a mountain biking and rock climbing dirtbag since the 1990’s, but has recently been spotted sporting lycra and crafting cocktail bitters so we're a little worried about him. Passionate about sharing exquisite food, fine libations, and secret places. Cofounder of Limberlost. Contributor for Bicycling Magazine, Expedition Portal, Bicycle Quarterly, Outside Online, 1859, VeloDirt, The Seattle Times, Bunyan Velo, The Radavist, Stay Wild, The Bend Bulletin, Northwest Sportsman, Portland Outsider, The Missouri Review, Portland Mercury, BikePortland, and the Chicago Reader. Gabe brings good spirits, a crooked compass, and contagious optimism everywhere he goes.