Benchmade knives are frequently found in the hands of outdoor enthusiasts, first responders, military personnel, and collectors, thanks to their outstanding warranty, above-average customer service, Lifesharp program, and web-based knife customization platform. But they weren’t always the pinnacle of success that they are today.

Originally incorporated as Bali-song, Inc. in Southern California, Benchmade has come a long way since they got their start manufacturing custom “butterfly” knives. We’ve featured their products a handful of times on Expedition Portal (365 Outlast, 550 HG Griptilian, 535 Bugout), and as someone who has had a Benchmade in my pocket since roughly 2008, I thought it fitting to offer you a proper introduction to one of my all-time favorite US-based knife manufacturers.

The Benchmade Story (a brief version)

Benchmade’s roots began when Les de Asis incorporated “Bali-song, Inc.” in California in 1980. Les started the business by purchasing equipment from a manufacturer who was ready to retire, and although the technology was very simple (“rudimentary” according to Benchmade), he began manufacturing his first knives with the help of Jody Samson (who performed all of the blade grinding). The first custom knife that they manufactured, the Bali-Song, is widely regarded as the traditional Phillippine knife and often referred to as a “butterfly” knife (hence, the Benchmade butterfly logo that we have come to love and recognize today.)

Les and Jody’s success with their custom Bali-Song knives led to their first production knife, the model 68 Bali-Song, which was a big hit with knife enthusiasts. They saw continued success from 1980-1987, expanding their offerings to include fixed blade and conventional folding knives, and changed their name to Pacific Cutlery Corp. Unfortunately, Les ran into challenges with quality control, price, and delivery timelines, leading to bankruptcy and some company changes. He closed Pacific Cutlery and started a new company in 1988, aiming to address all of the previous shortcomings while bringing the entire manufacturing process to the US. 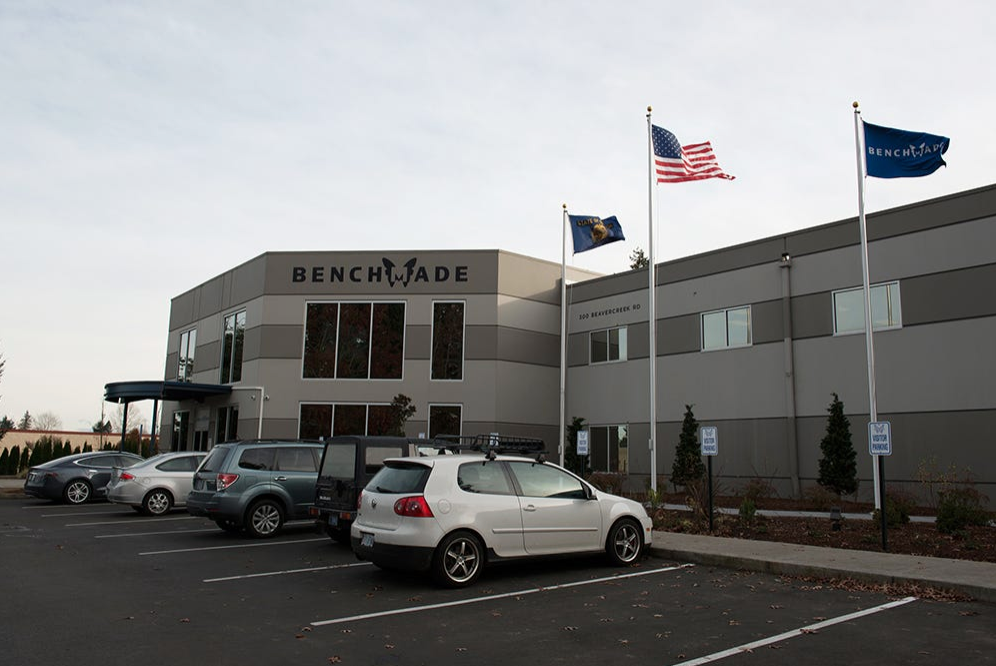 The new company would need a name, and Les settled on Benchmade, an acknowledgment of the fact that their final product was assembled by hand “at the bench.” But despite their hand-assembled approach, precision-manufactured parts resulted in a high standard of quality across their line of products.

In 1990, Benchmade moved their facilities to Clackamas, Oregon, and officially began production under their new name. During this time, new technology, their first military contracts, and their automatic knife offerings fueled growth. It wasn’t long before they needed even more space to keep up with demand, and they moved once again, this time to their current location of Oregon City, Oregon, and a brand new 144,000-square-foot facility. 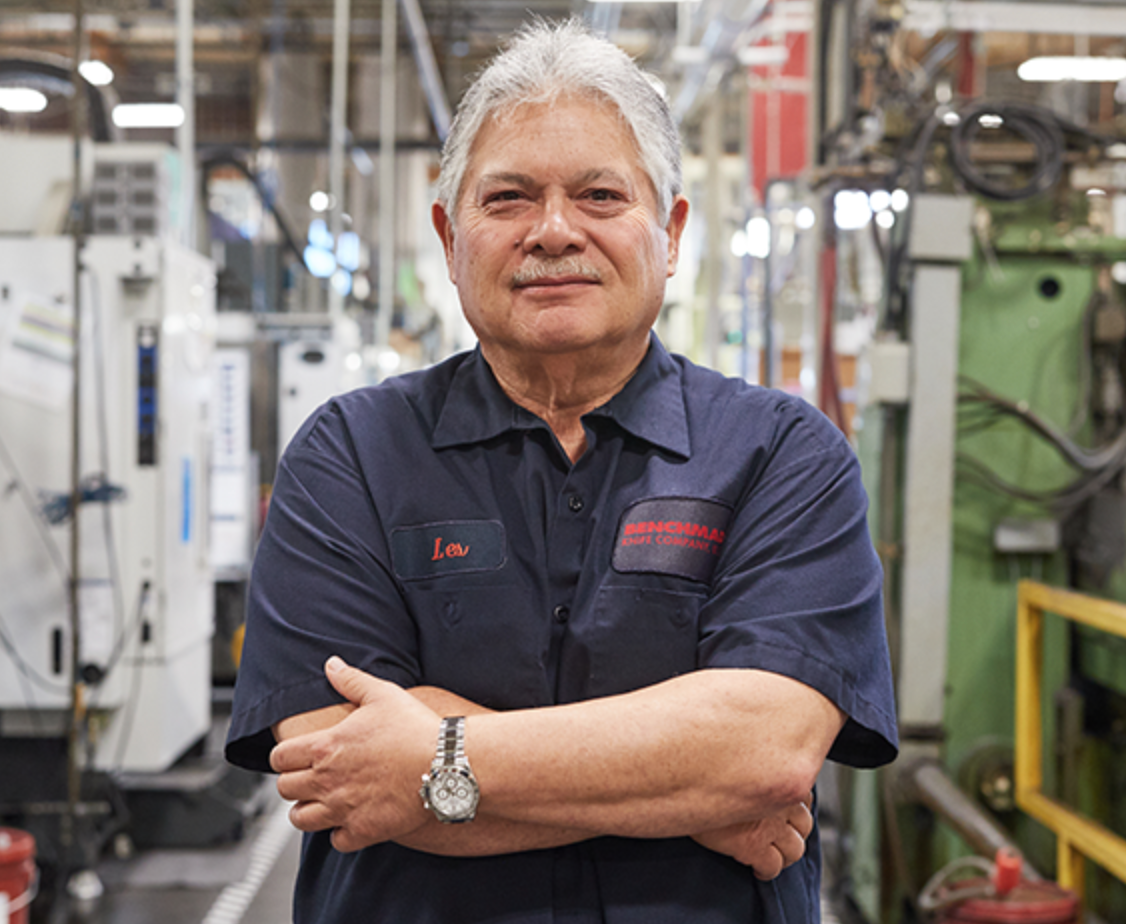 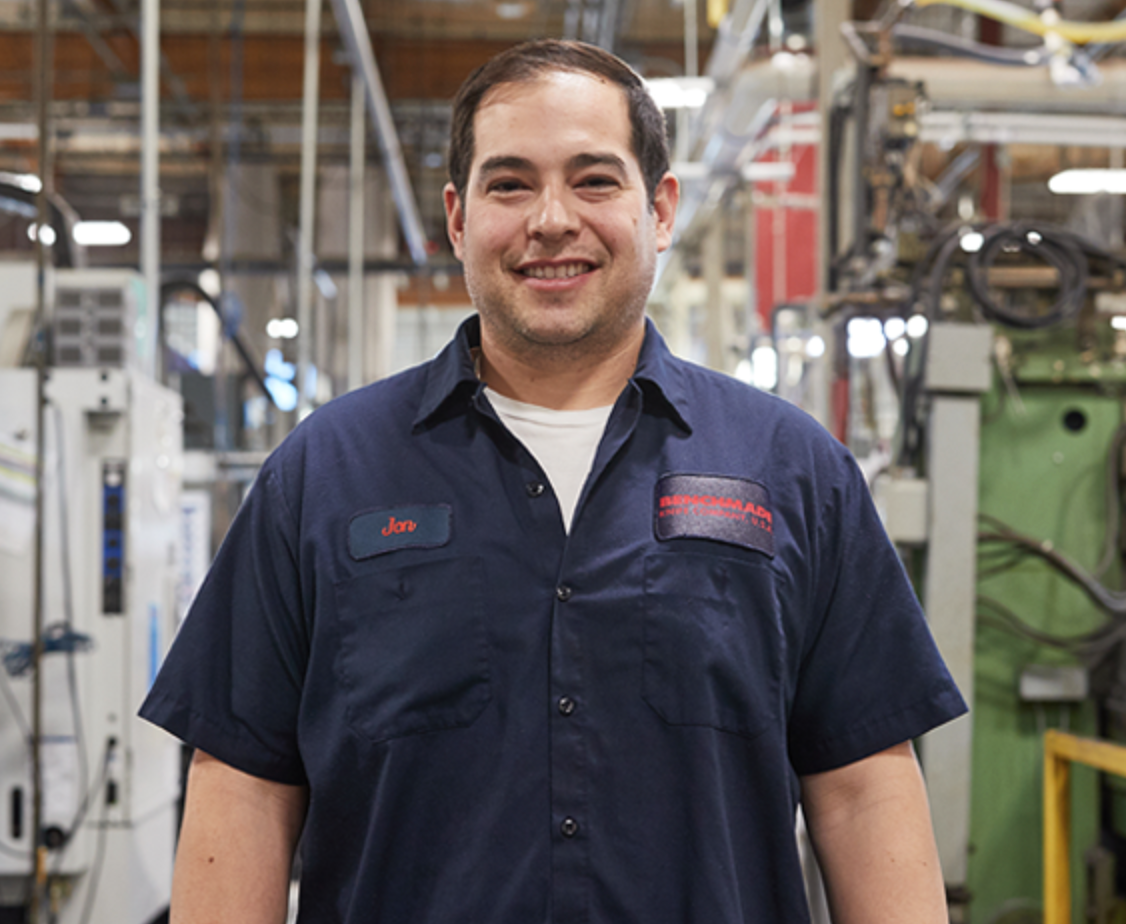 With their ability to produce high-quality knives in large quantities, Benchmade has partnered with custom knife makers like Mel Pardue and Warren Osborne, who have developed some of the most well-known blades and silhouettes in the Benchmade lineup. Ultimately, through their success, Benchmade has brought high-quality, unique knife designs to the masses that are truly built for a lifetime of use.

A Knife Is Only As Good As Its Warranty

All Benchmade knives come with a lifetime warranty that states that their products will be “Free from defects in materials and workmanship from the date of purchase for as long as said purchaser owns the knife that was purchased. Benchmade will repair or replace a defective knife that is covered by this warranty at Benchmade’s option.”

Of course, their full warranty statement includes additional clarifying language, but the message is clear; when you buy a knife from Benchmade, you are buying a knife for a lifetime of use.

But a lifetime of use requires a lifetime of maintenance. Incredibly, Benchmade has you covered on that front too with their Lifesharp program, started in 1999. This service program covers all of their products and allows customers to send their knives in for a free cleaning and factory sharpening, as often as you desire, indefinitely. Lifesharp is another reason why you invest in a Benchmade knife. And if the service wasn’t enough, they will also ship your knife back to you, free of cost. 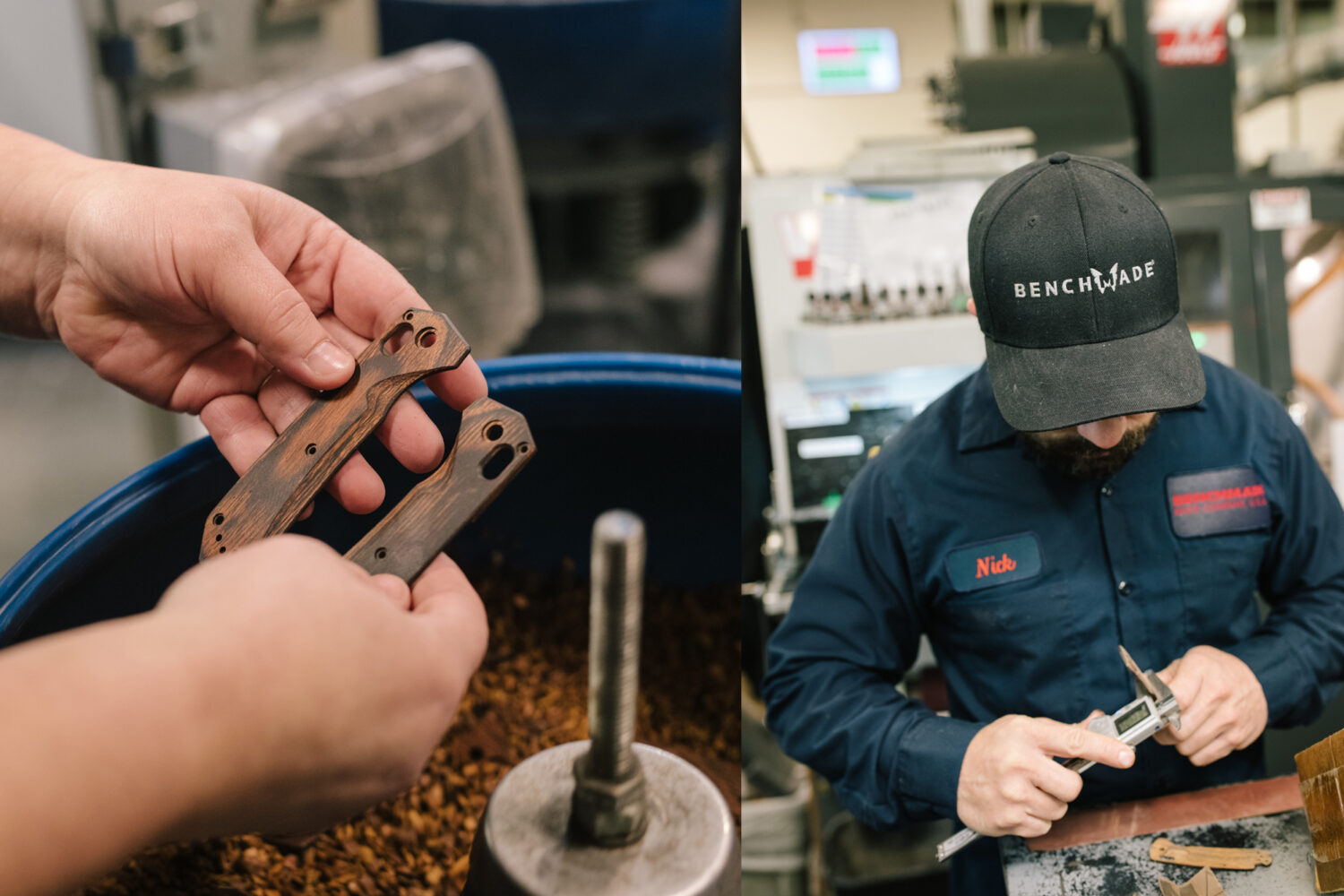 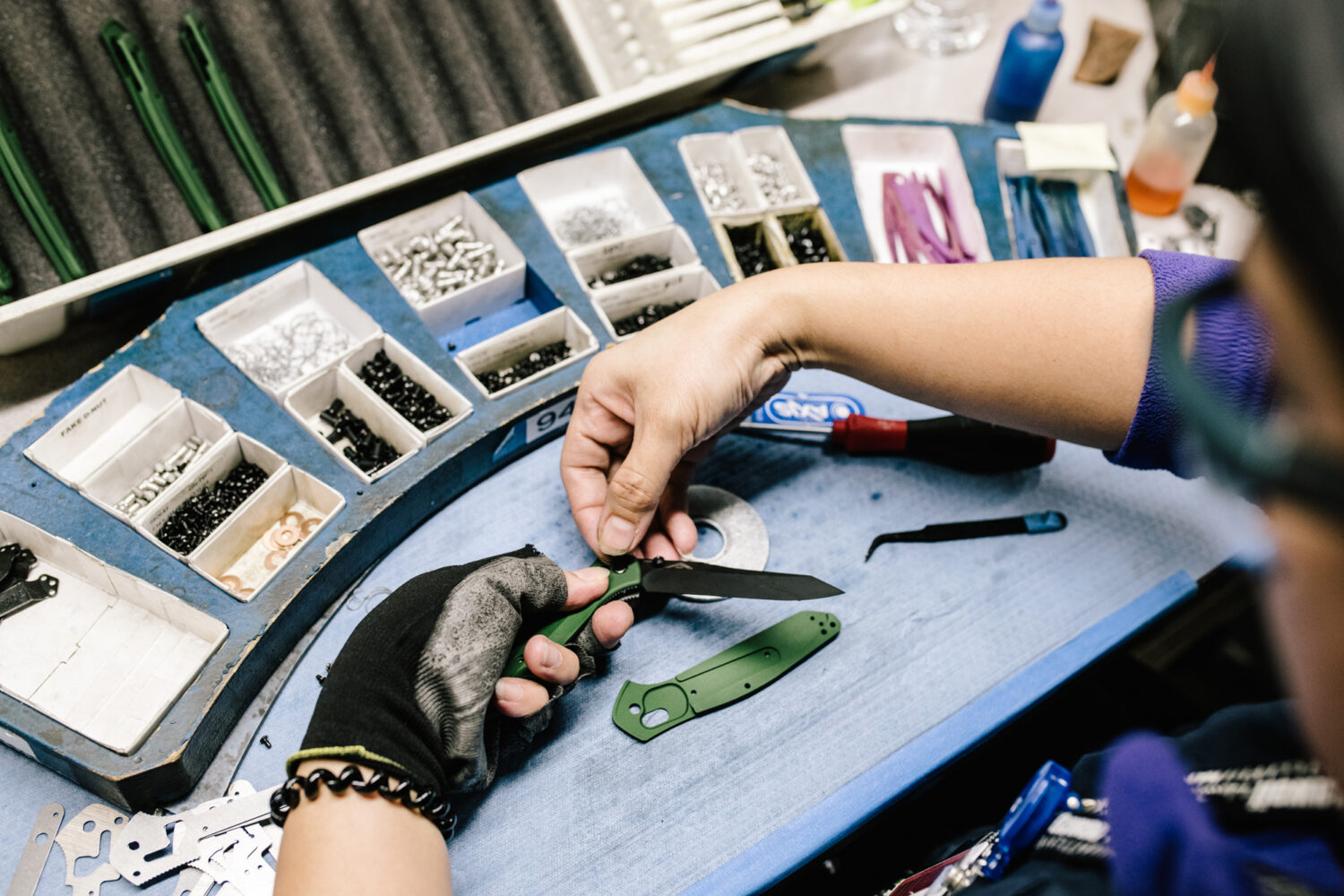 Assembled by hand, at the bench. 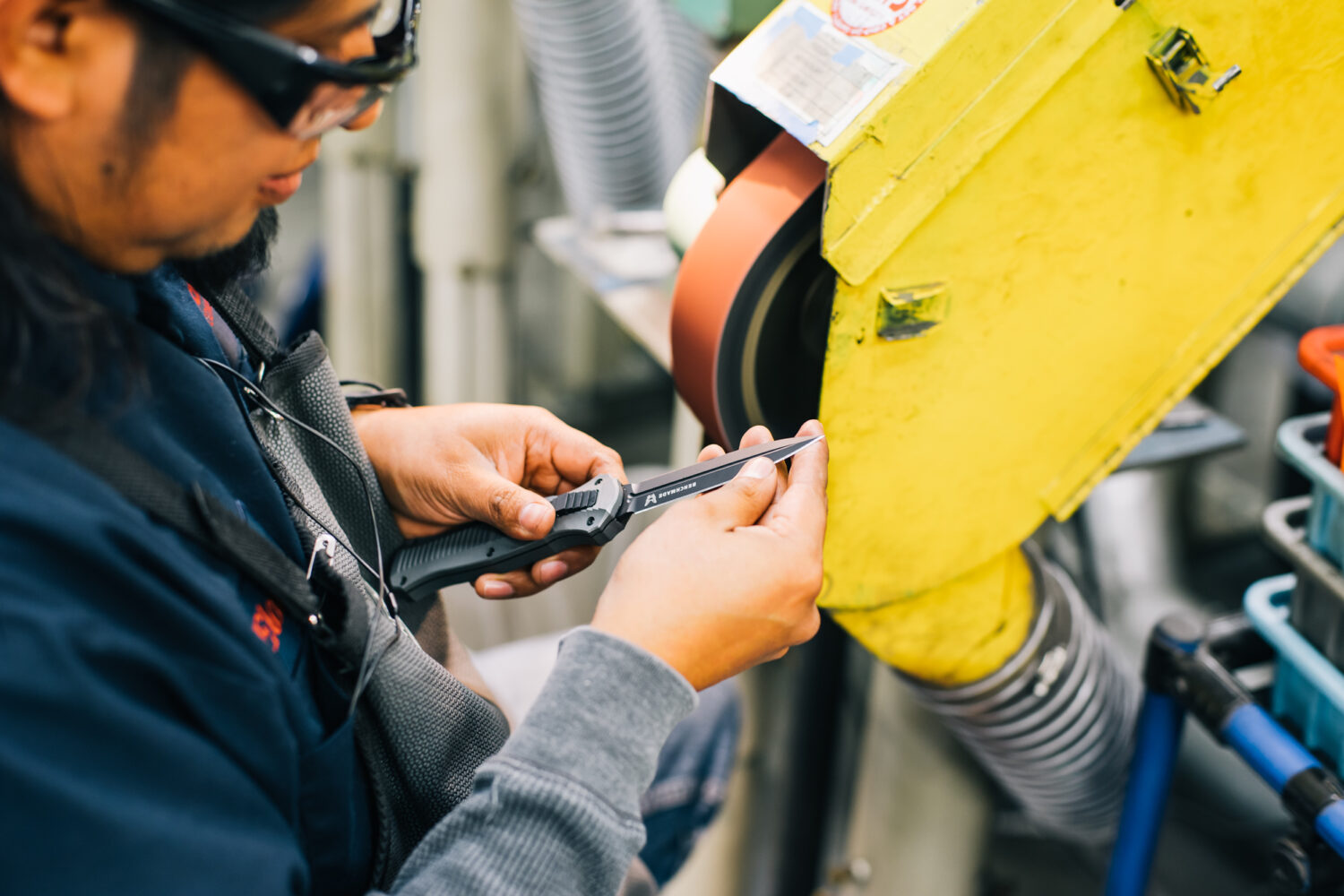 I have been a fan of Benchmade’s knives for a long time, and my original knife, the Griptilian, is still going strong, thanks to Lifesharp. I recently sent it in for a service after it had spent a season lost outdoors. It was packed with dirt and grime, and the blade would barely open. Needless to say, it was in bad shape. But after a few weeks in Oregon at the Benchmade factory, it came back to me in perfect condition, fully cleaned, oiled, and sharpened. And to my surprise, there was an additional blade in the box that was returned to me (the original blade). A note accompanied my knife explaining that the tech who performed the service was unable to get the axis-lock functioning properly with the original blade, so he replaced it with a brand-new duplicate and sent both back to me. 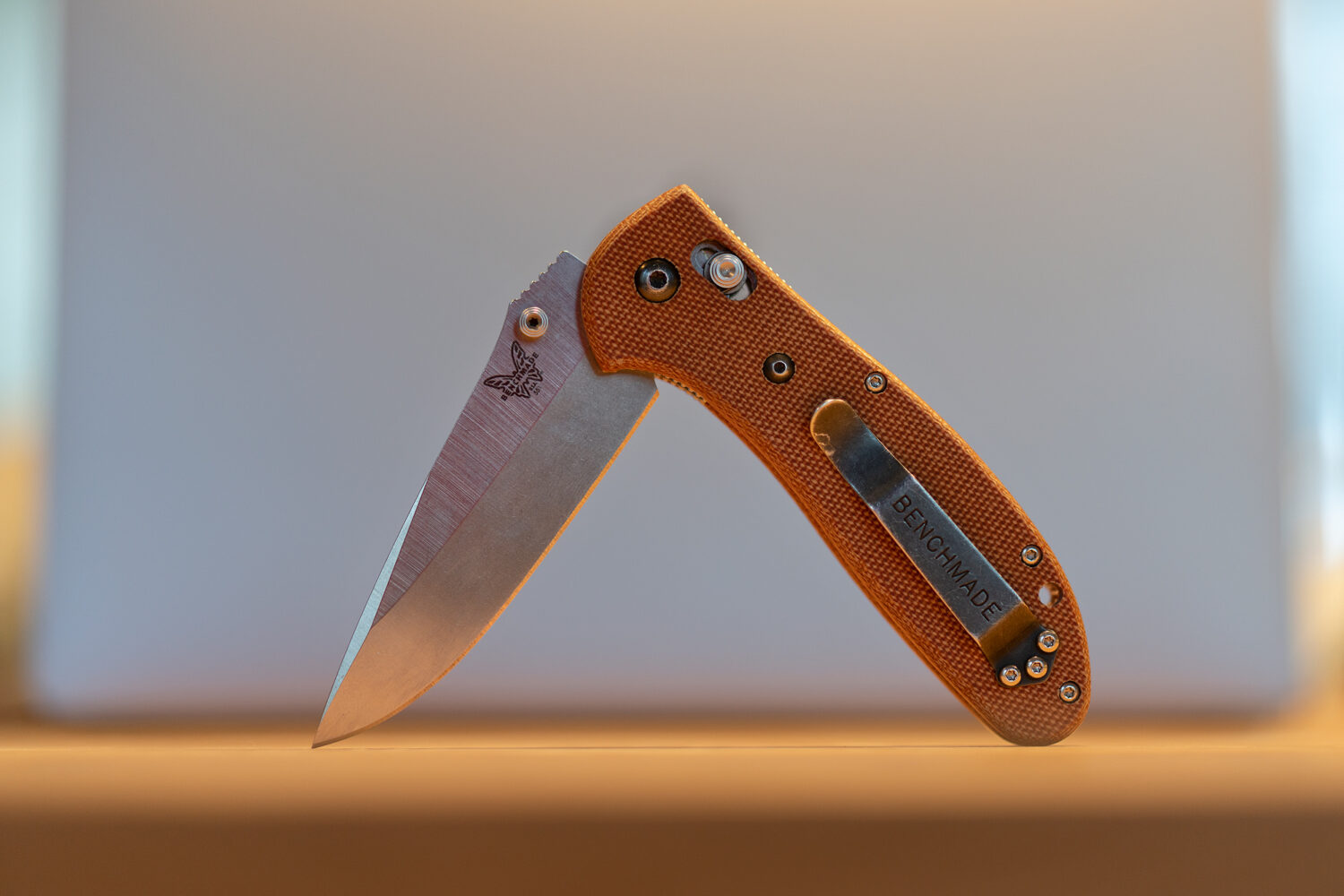 This experience simultaneously confirmed the quality of Benchmade’s customer service as well as the value of investing in their products. Lifesharp exemplifies the Benchmade commitment to the customer, but it’s also a commitment to the tool and a statement that we should fix and repair the things we own so that they can live up to their full potential.

One of the most unique offerings from Benchmade is their custom knifemaker program which delivers the experience of creating a custom knife at a price-point that is more approachable for non-collectors. This program has its roots in the custom Bali-songs that Les made back when he was just getting the company off the ground and has gone on to be an extremely successful element of Benchmade’s offerings.

The first version of the online knife customization platform arrived sometime around 2010, but the interactive program that is available today was formerly introduced in 2013. When you navigate to this custom knife builder on Benchmade’s website, you begin the creative process by selecting from several models, including crowd favorites like the Griptilian, Crooked River, or Barrage. The models that are available for customization change from time to time. My fingers are crossed in hopes that something from the 940/943 Osborne family will be added to the customization platform at some point.

Above: The 3D render from Benchmade’s online custom knife builder. Below: The final product in all its glory. 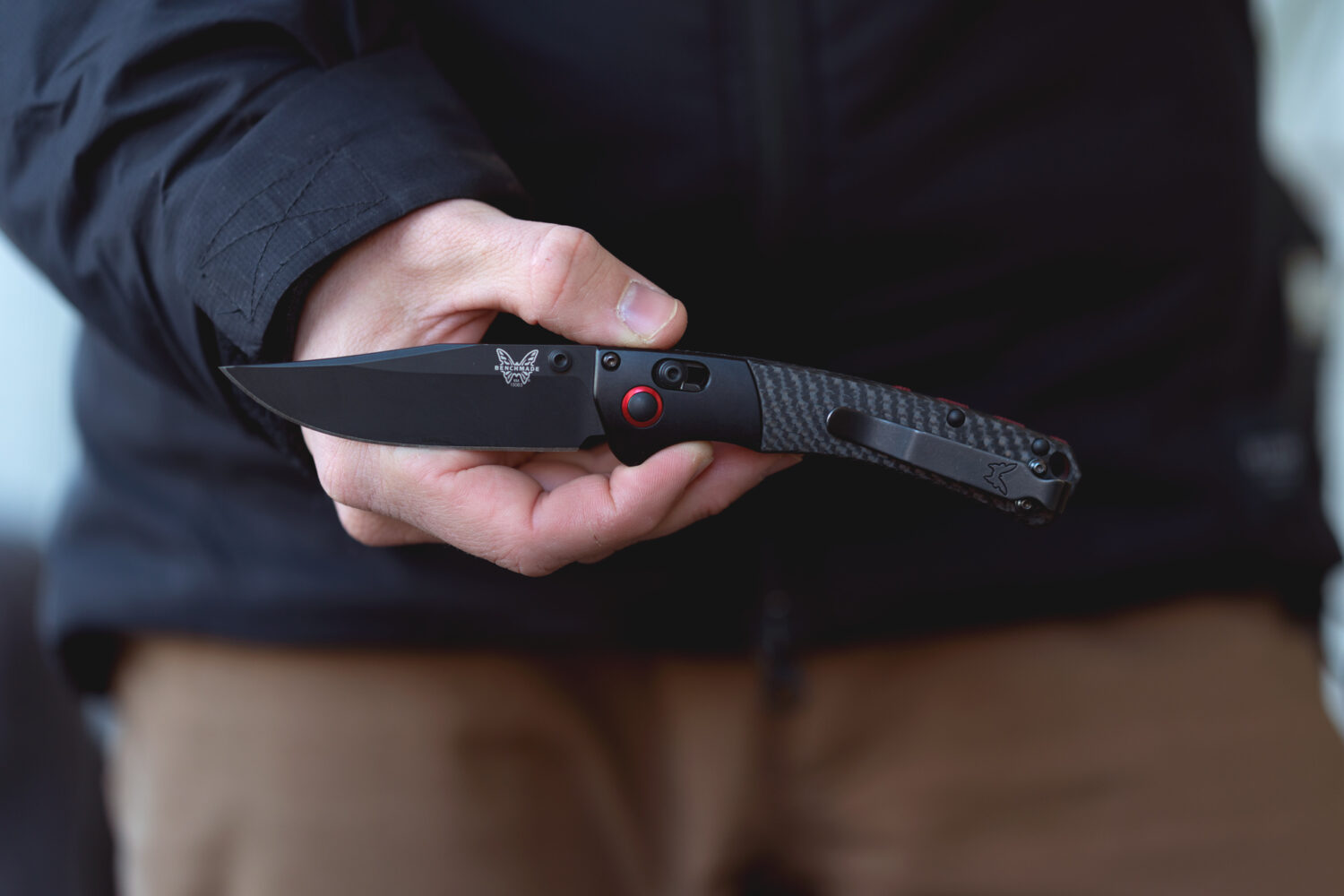 Once you select which model you want to customize, you go on to kit-out your chosen knife with a variety of blade steels, handle scales, laser blade-etchings, and hardware in a variety of colors. It’s an awesome experience, and as you work through the design process, a 3D model displays your choices in real-time.

If you made it this far, it’s probably clear to you just how much I love and appreciate Benchmade. Between their warranty, customer service, Lifesharp, and the customization platform, it’s rare that I want to purchase a blade from anyone else, and why would I? Knowing that Benchmade has my back and will help me maintain my cutting tools for as long as I own them is an experience that just isn’t very common in this day and age. Combining those facts with their USA-made approach to manufacturing sets a gold standard that all knife manufacturers should strive for.

All archival and factory photos courtesy of Benchmade. Learn more about Benchmade Knives and browse their catalog of cutlery here.