A four-wheel drive professional doesn’t cross their fingers in hopes that the terrain ahead will be forgiving, or that an avoidable mechanical issue won’t present itself at the worst possible moment. Instead, they ensure their vehicle and skills are up to task when operating far from the beaten path. Each year, my fieldwork, guiding, training, and scouting calls for over 15,000 miles of travel in the New Mexico Backroads’ (NMBR) Rubicon. Whether leading a multimillion-dollar treasure hunt north of Santa Fe, photographing wildland fire crews battling flames in the Gila National Forest, or scouting backcountry along the U.S.–Mexico border, the focus is on providing services where pavement does not exist. The Rubicon serves as my primary transport and base camp for all operations. Its build theme and upgrades have centered on balancing three characteristics: reliability, capability, and versatility.

GOING TO THE DARK SIDE

In 2012, I retired a Toyota 4Runner and purchased a 2012 Jeep Wrangler JK Unlimited Rubicon (JKUR). The JKUR’s ability to accommodate 35- or 37-inch tires with minimal suspension lift, paired with the recent interior redesign and power plant revisions, edged out the other contenders (2012 models of the Toyota 4Runner and Tacoma). After taking delivery, my ambitions to make Cruise Moab, my favorite springtime Toyota-based event, vanished into thin air—I was a Jeep guy now. This type of crossover is known in Toyota circles as “going to the dark side” and is even considered blasphemous amongst the most hardcore Cruiser-heads. Truth be told, the stigma that surrounds going from Toyota to Jeep, or vice versa, is nothing but smoke, as the latest low-range four-wheel drive offerings of either marque are some of the best models ever produced.

In the years leading up to buying a Jeep, I found myself guiding more and more individuals driving JK Wranglers on NMBR overland trips, due primarily to its increasing popularity and strong aftermarket support. For an enthusiast looking to one vehicle that could tackle both the toughest trails and support extended overland routes, the JKUR’s Unlimited trim package was well-suited. The 116-inch wheelbase and impressive axle articulation offer excellent stability in technical and off-camber driving situations. The platform provides exceptional off-pavement prowess, adequate interior storage area, and (cue endearing gasp from my Toyota friends) strong dependability, putting it in a class of its own. Aside from the RAM Power Wagon, it is one of the only vehicles available in North America that comes straight out of the box with knobby tires, locking front and rear differentials, and an on-demand front sway bar disconnect—not to mention a 4:1 (low-range ratio) transfer case and steel rock rails. As for reliability, I’ve never had a JK model Wrangler temporarily sidelined for more than owner-neglected maintenance, an injector issue caused by bad fuel, a trail damaged axle shaft, or a broken transfer case shifter linkage bushing.

The NMBR Rubicon was built for dual purposes: technical trail running and long-distance, self-supported off-pavement travel. From winch mounts to tire carriers, and wheels to roof racks, I’ve been afforded the opportunity to see firsthand which aftermarket products work well and which need improvement. Overall, the best ones are well-thought-out yet simple; they don’t overcomplicate function or attempt to reinvent the wheel. And so, the ideology of the build began to take shape.

To tackle southern New Mexico’s infamous canyon bottom boulder fields, I wanted to run a 35-inch tire and 3 inches of suspension lift height to optimize traction, center of gravity, and ground clearance. The suspension would also need to provide excellent handling and ride qualities in a variety of driving conditions: from low-speed rock crawling to high-speed desert scouting missions. The JKs I’d driven had suspensions ranging from simple coil/shock replacements to complicated long-arm systems. My interest piqued after trying out an American Expedition Vehicles (AEV) JK350 Wrangler equipped with their 3.5-inch DualSport suspension system and full parts lineup; the ride comfort and performance characteristics were unmatched. I reached out to AEV’s Chris Wood, who shared their straightforward approach to designing and manufacturing parts—fundamentals based on improving performance and function while complementing the OE design.

With less than 1,000 miles on the odometer, I began the build. The only way to learn the dynamics of a new vehicle is to become intimately acquainted with it from bottom to top. Just like the 4Runner, I did all the work myself in our shop. The initial build took 2 weeks as I installed suspension, wheels/ tires, armor, winch, electrical, and other major upgrades. While the parts installation process was relatively simple, considerable time was added to address every fine detail, down to Mopar gloss black paint applied to grinding areas and double- and triple checking my work. Overall, unexpected setbacks were minimal and the job was completed the night before its maiden voyage: the Easter Jeep Safari in Moab, Utah. After cruising 600 miles of pavement, the Rubicon completed Flat Iron Mesa and Hell’s Revenge without skipping a beat. Confidence inspired, on the return trip to New Mexico, I opted to take an extended backroad route through Comb Ridge and Navajo Nation land. So far, the Rubicon has run trails from California’s Dusy-Ershim to New Mexico’s Chile Canyons (now officially named Robledo Mountains OHV Trail System), and completed hundreds of field assignments and guided trips—all without fail.

While the outside of the Rubicon looks like most any other AEV-equipped JKUR, the inside contains a custom sleeping platform and cargo deck I built to maximize storage space and mount an ARB fridge to. Having grown up working for my Dad’s construction company, I developed carpentry skills and an understanding for practical configuration early on. After months of designing, fabricating, and field-testing a number of prototypes, the perfected interior platform/deck was born. The base material is 1/2-inch (veneer core) Russian birch; the top surface headpiece, tailpiece, and deck ribbing are 1/8-inch aluminum plate. The entire unit was finished with an industrial-grade, non-skid, spray-on coating developed for ship decks and oil platforms. Canyon Dancer strap rings are installed throughout, mated to embedded T-nut fasteners to provide strong cargo lashing points. A headboard piece, which firmly nests between the tracks of the ARB fridge slide when not in use, easily installed in the footwell (behind the passenger front seat when slid forward) to provide over 6 feet of linear sleeping space; it also serves as a lapboard for writing or eating. The rear roll-bar mounted A/T Overland interior rack maximizes otherwise unused interior space, while a fold-down Outback Adventure tailgate-mounted table provides a food prep and work surface (a compact substitute for a stand-alone table). Rechargeable LED lanterns are used instead of hard-wired lighting, and backpacking style meal prep and cooking equipment in place of full-scale items. Storage access is provided by waterproof and vibration-free kayak hatch covers. Over 100 pounds of vital tools, spare parts, recovery gear, and provisions reside under the cargo deck’s surface level. As a space saving and silent means to address storage, a variety of soft bags and pouches (such as those made by Adventure Tool Company) are utilized in lieu of hard-sided boxes or containers. I use 10-liter MSR Dromedary bags for water supply; they can be easily placed in an unused footwell or floor space (or even used as a pillow) and rolled up and tucked away when empty. My field kit is constantly scrutinized to ensure only the most critical equipment and provisions have duplicates, and less important ones have multiple uses.

Since the build is mostly complete, the majority of my attention and resources now go toward the preservation of the truck. Four-wheel drive vehicle capability is dependent on reliability— not the other way around. Upon returning from the field, I meticulously conduct a detailed inspection from bumper to bumper. Any irregularities are tracked down and addressed before the next outing. I don’t want to be left broken down on the side of a mountain or in a flooding canyon because I neglected something simple. These downtime activities help build my relationship with my most vital piece of equipment—my vehicle. Because of the demanding conditions the Jeep is constantly subjected to, all manufacturer recommended service mileage intervals have been reduced by half. Between 30,000 and 50,000 miles, I replaced the unit bearings, power steering pump, steering gear box, transfer case shifter linkage bushings, serpentine belt, and radiator cap. While these parts didn’t exhibit excessive wear, they are known as weak links when subject to heavy use. With nearly 70,000 miles on the odometer, the NMBR Rubicon has yet to have a single breakdown or failure. Let’s see what the next 70,000 miles have in store. 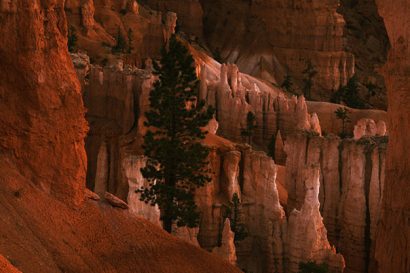 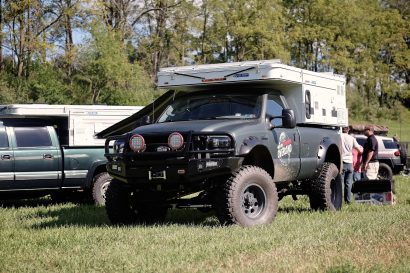 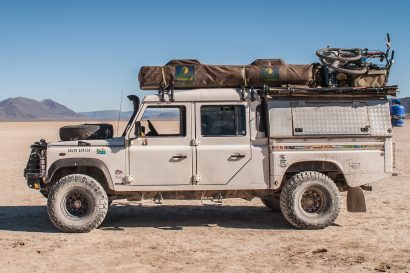