Quito, the highest capital in the world at nearly 10,000ft, was our first big city in South America and the first capital we visited on our trip. We normally steer clear of big cities since they can be a mess to drive in and in general we prefer to explore the outdoors, but cities contain loads of history and show us a part of the country that we otherwise wouldn’t experience.

We were encouraged to visit Quito by Paula and Jeremy of Seventeen by Six, fellow overlanders from England also traveling in a VW van. Although we had not yet met, Paula kindly wrote us and offered up the spare bedroom of their apartment. On a whim we decided to take them up on their offer and are enormously glad that we did. Immediately feeling at home with Paula and Jeremy, we swapped travel stories and they filled us in on the places in Ecuador they had explored.

In the morning Paula and Jeremy took us on a tour of the old center of Quito. We visited the stunning Basilica del Voto Nacional which was so big it was difficult to photograph. The outside of the basilica is decorated with stone gargoyles resembling Ecuadorian animals, such as armadillos, marine iguanas, lizards, and tortoises while inside light shines through hugely ornate stained glass masterpieces. 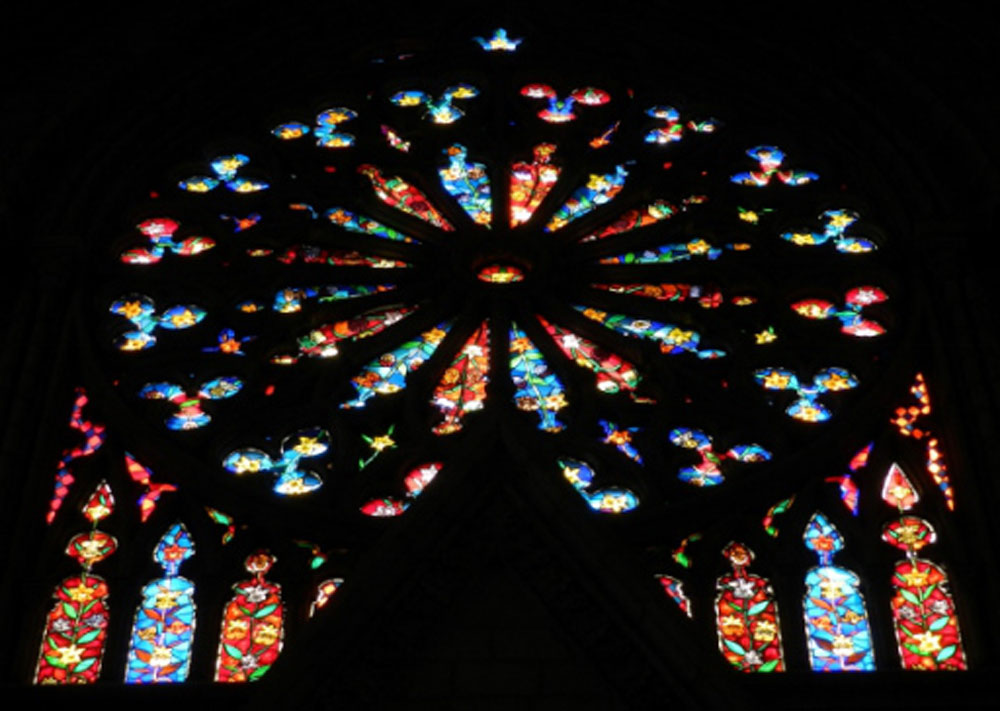 We strolled around the bustling old streets and sat in the city’s beautiful, open squares which Quito has no shortage of. 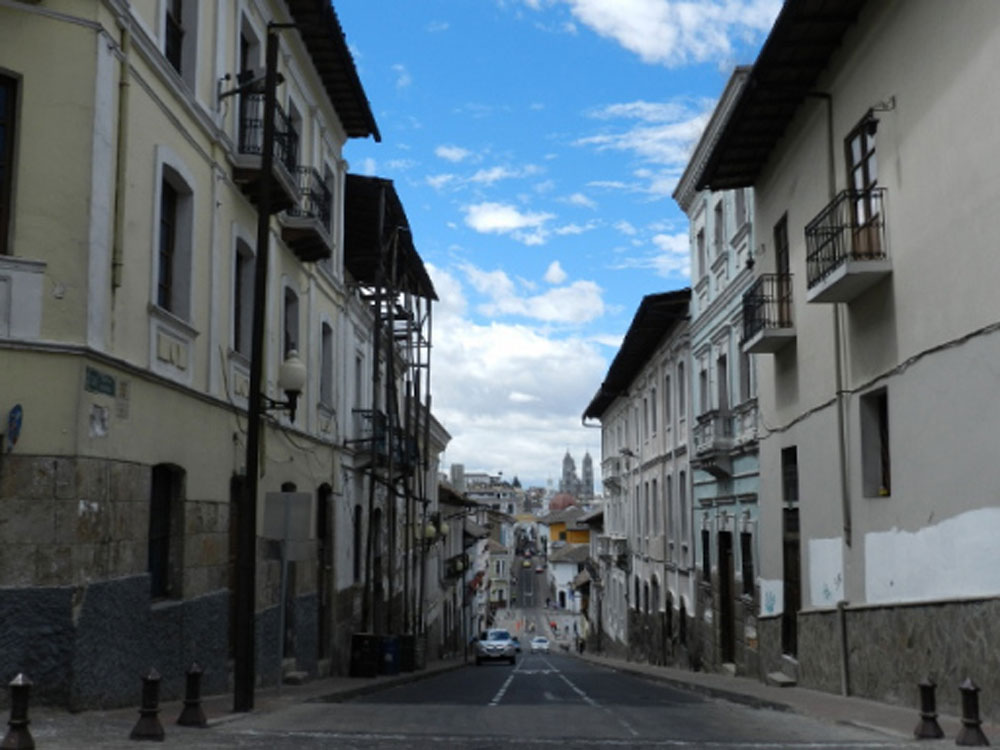 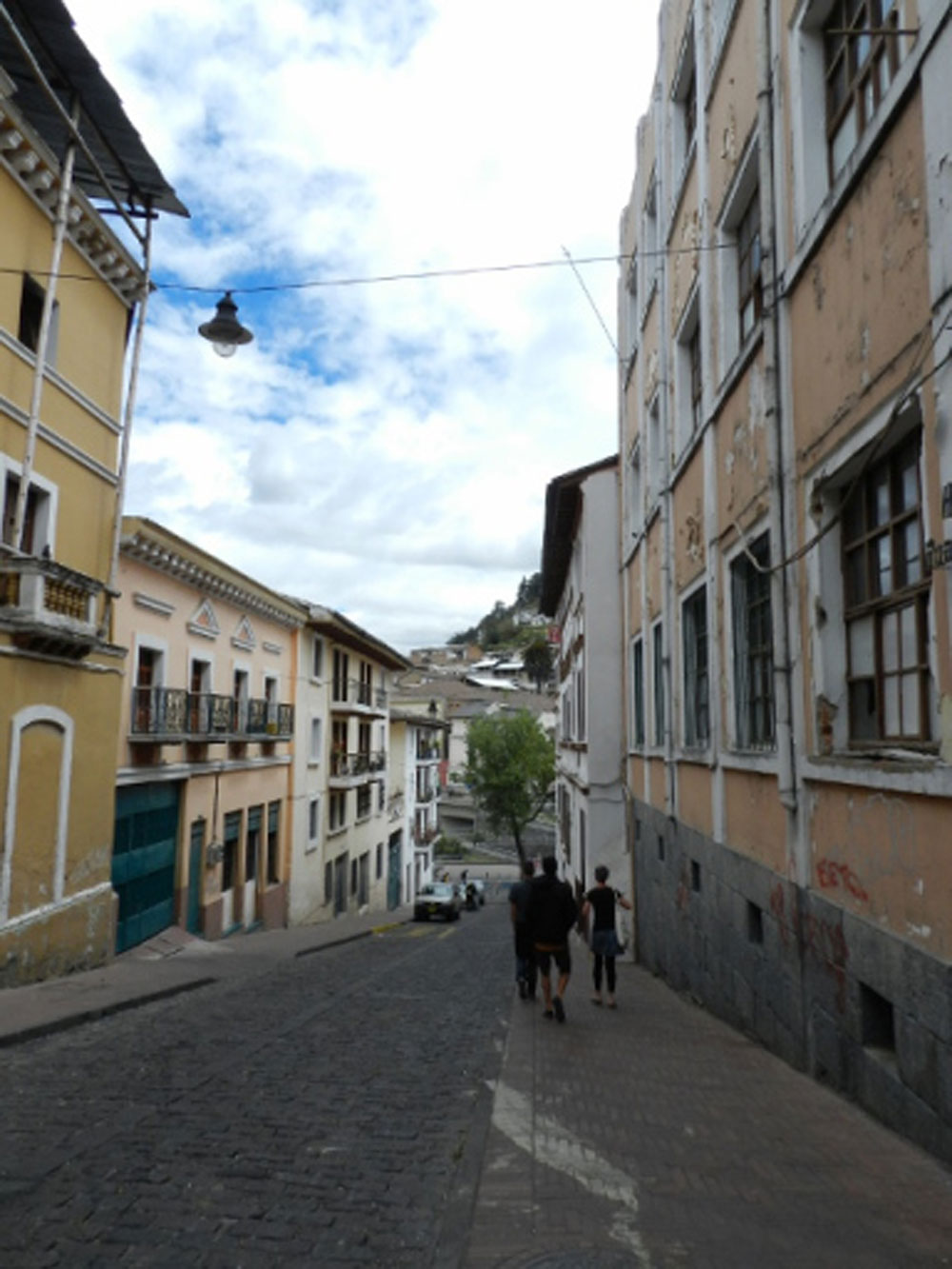 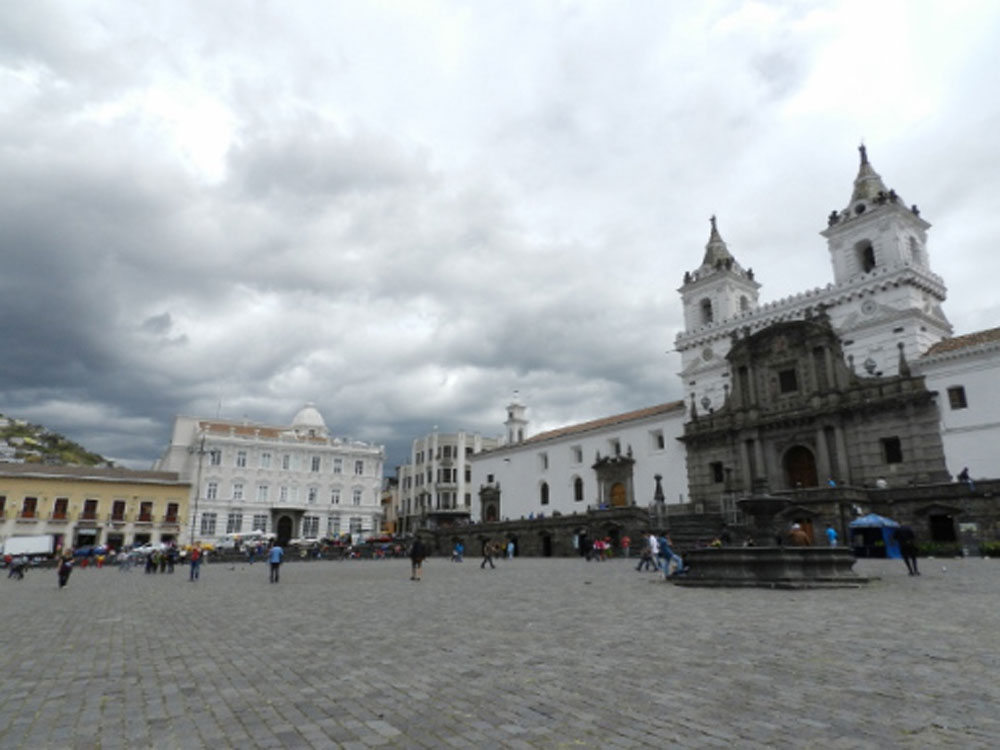 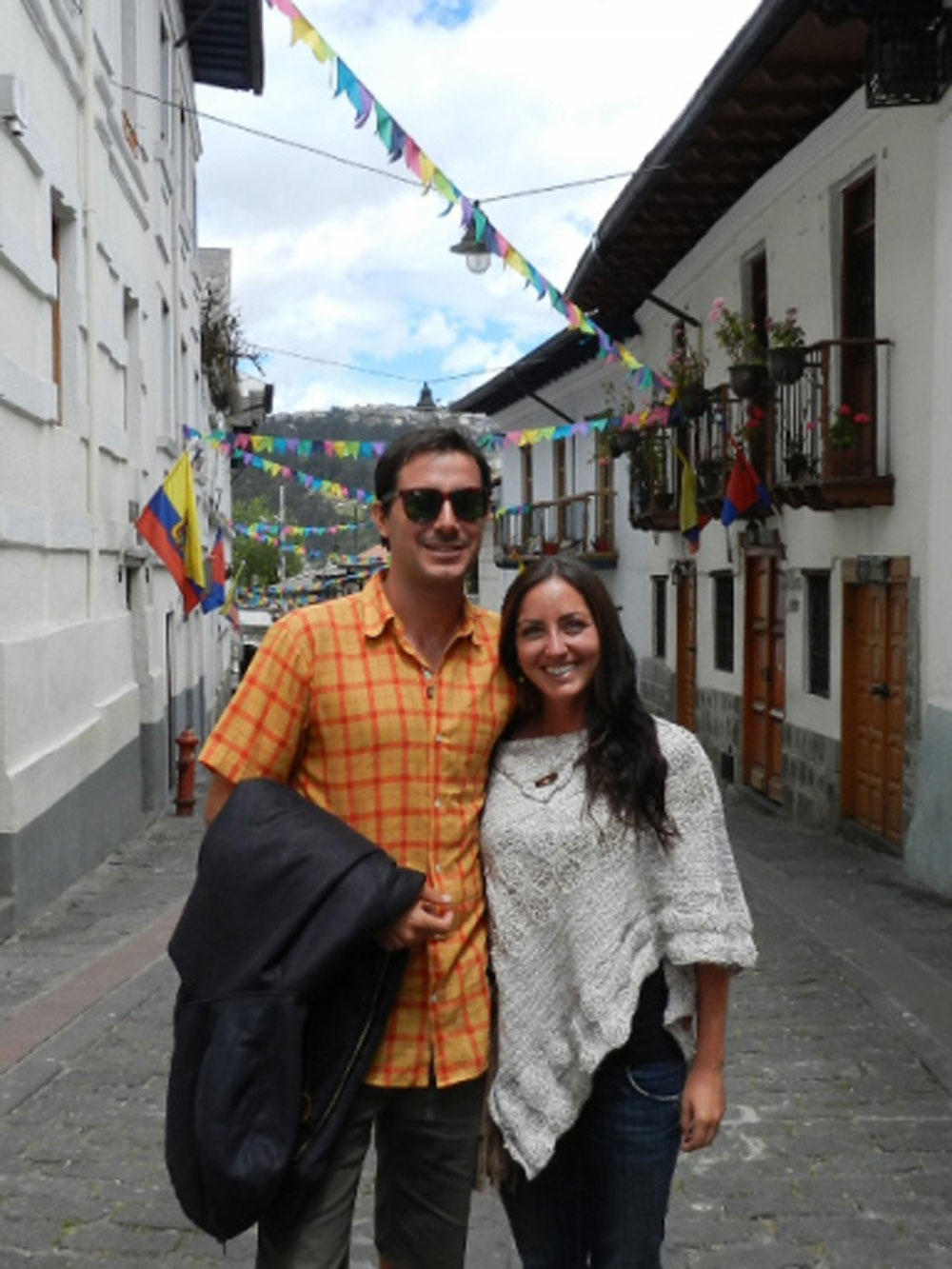 Around the corner from one of the main squares we visited a church with an interior completely plated in gold. We sat in awe looking at the beautiful patterns along the walls and ceiling and marveled at the insane amount of gold all around us. Imagine what could be done with all that gold! Photos are not allowed but I couldn’t contain myself and managed to successfully sneak one. 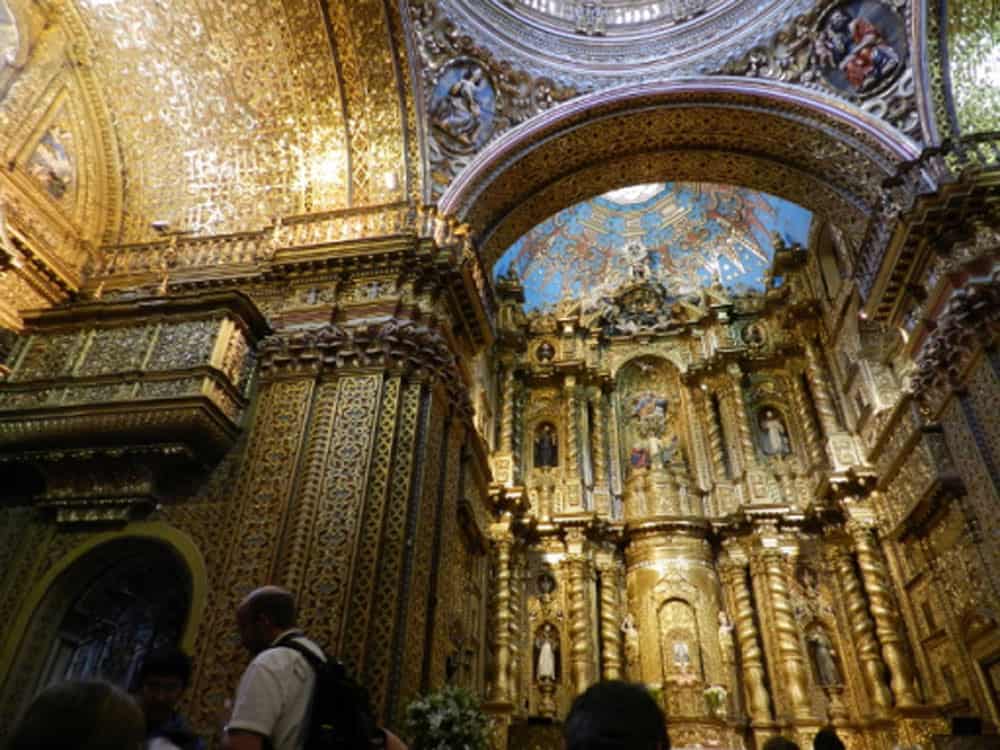 La Iglesia de la Compania de Jesus (Church of the Society of Jesus) Next we hiked through a bit of a sketchy neighborhood up to El Panecillo, a hill where an angel sits looking over the capital. High above the city, happy families flew kites as we all enjoyed the breathtaking views of Quito, sprawled between mountains as far as we could see. 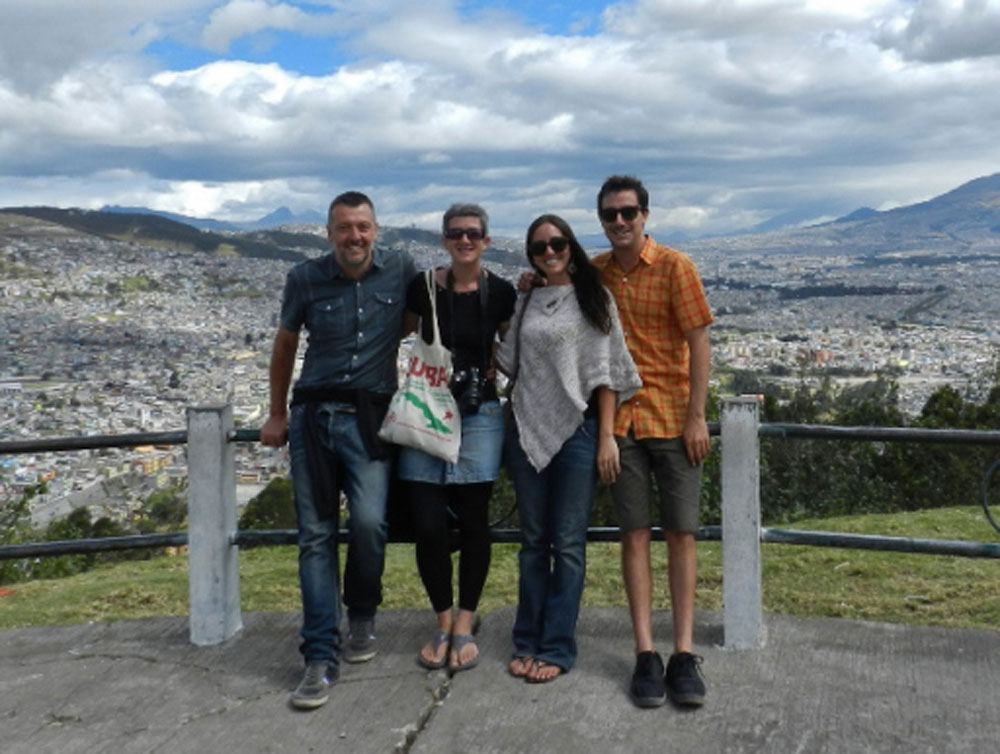 Enjoying the views with our kind hosts and new friends 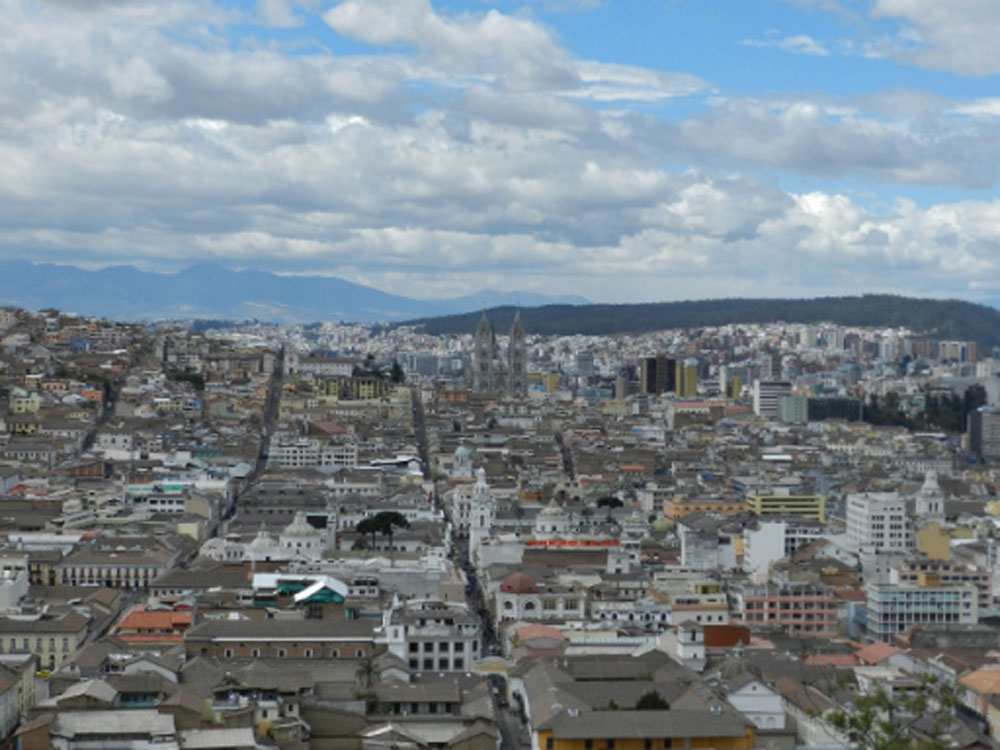 The basilica towering over the old city center of Quito

A family flying a kite high above the city

After a couple restful days and lovely evenings of wine, beer, vodka flavored alcohol, and delicious home cooked dinners, we bid Paula and Jeremy farewell with hopes to meet them down the road.

As we made our way southeast to Cotopaxi National Park, the sky turned grey and a light rain began to fall. We drove through pine trees until we rose above the tree line and the scenery changed to shimmering gold and silver high altitude grassland. The dirt roads were rough and rattling but soon enough we made it to Tambopaxi Lodge where we set up camp. Every once in a while a rocky mountain crag or a snowy peak would peek through the thick, grey clouds, but we didn’t really know what we had in store until the next morning we woke up to this: 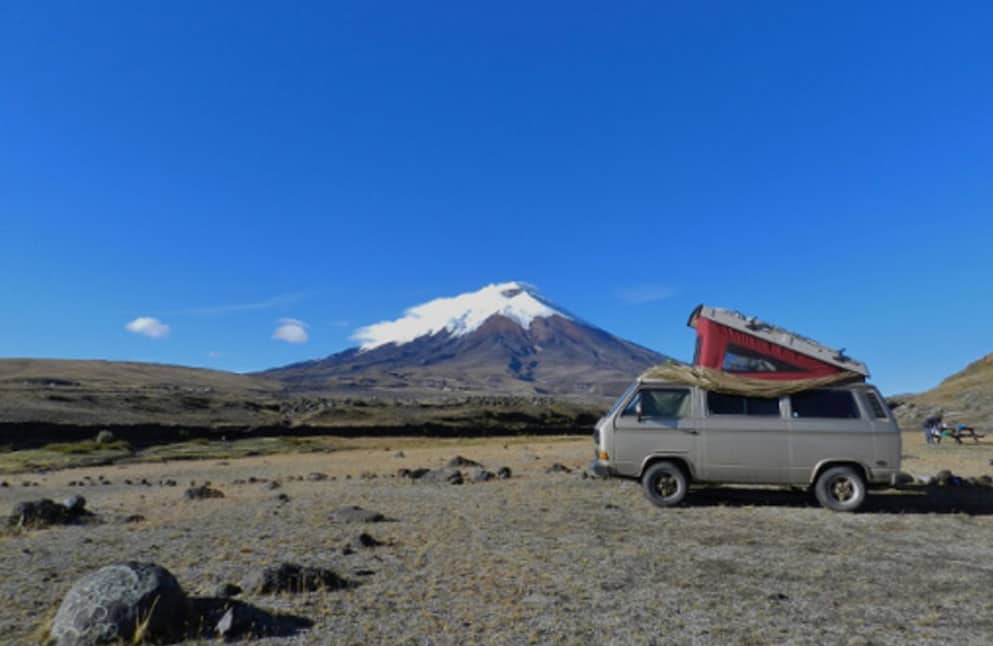 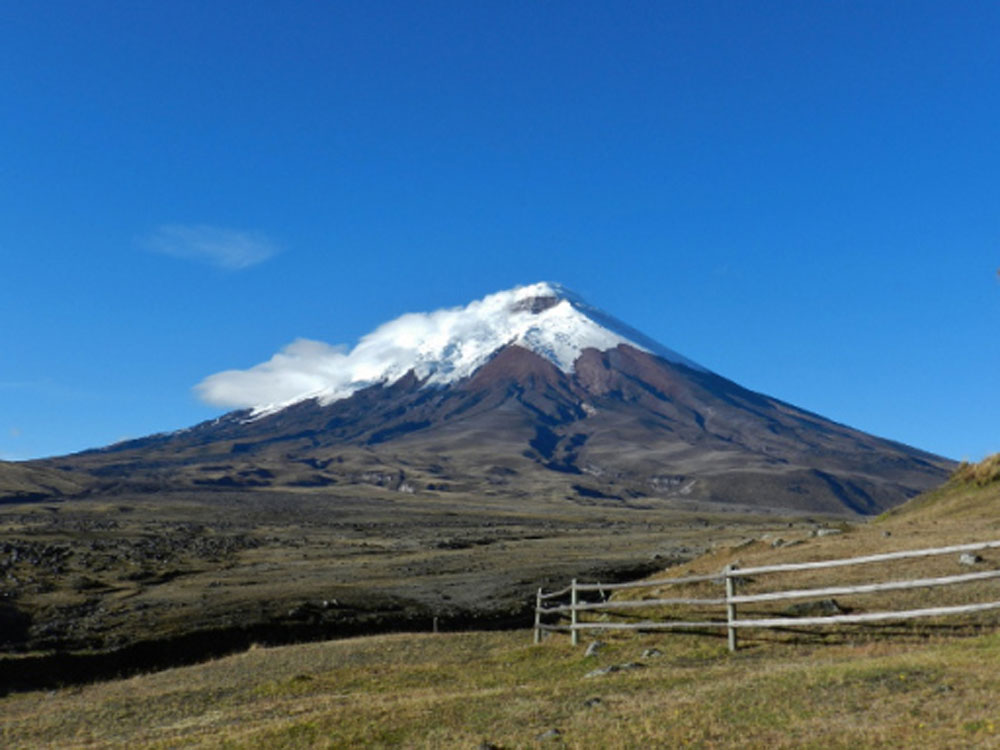 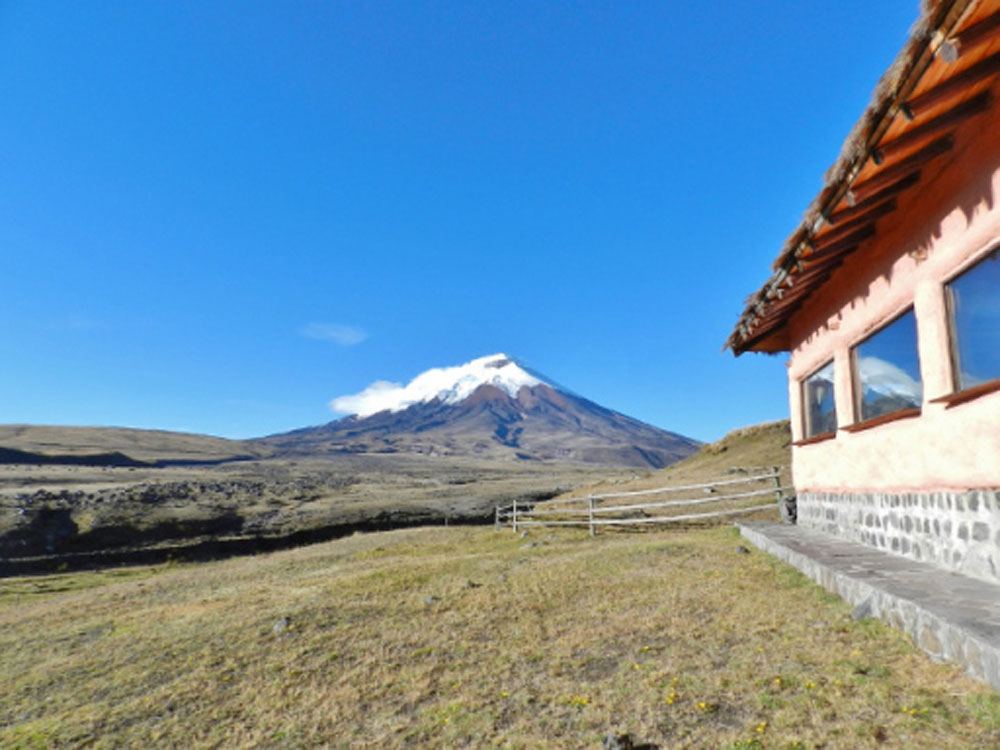 The view of Cotopaxi, the second highest active volcano in the world, was breathtaking. We couldn’t look away. Our campground was surrounded by majestic peaks, a setting different from anywhere we have ever been. 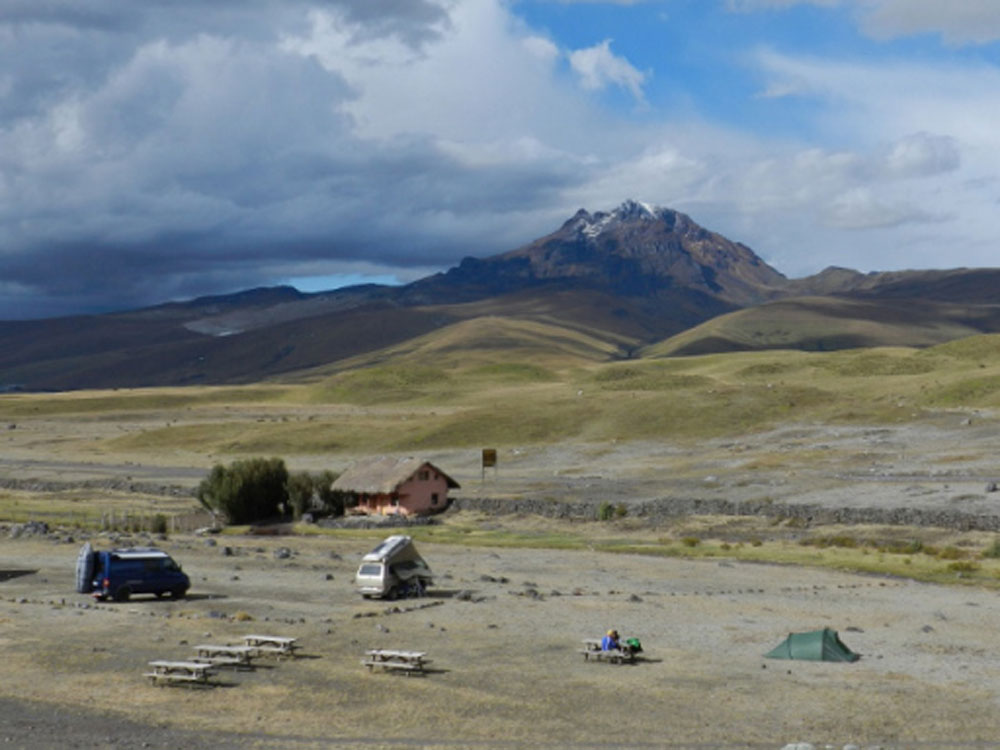 Cotopaxi and the surrounding mountains are very popular with climbers. I spoke to a few who told me they were setting out to summit the peak during the night when there was less threat of avalanches. Wow, scary! Non-climbers like us could hike up to the Refugio, a climbers refuge at 15,950ft, and then continue on a few hundred feet higher until the edge of the glacier after which proper mountain climbing gear was required. That was our plan for the day. We hopped in the van along with a German couple we offered a ride to and slowly made our way up the winding road toward the parking lot at the base of the volcano. We climbed higher and higher, slowly and more slowly, until finally the van couldn’t go any higher. The thin, high altitude air is as hard on the van as it is on people trying to climb the mountain. Being stuck on a steep slope, Aron backed the van down to a turnoff in the road where we parked and left the van to catch it’s breath. 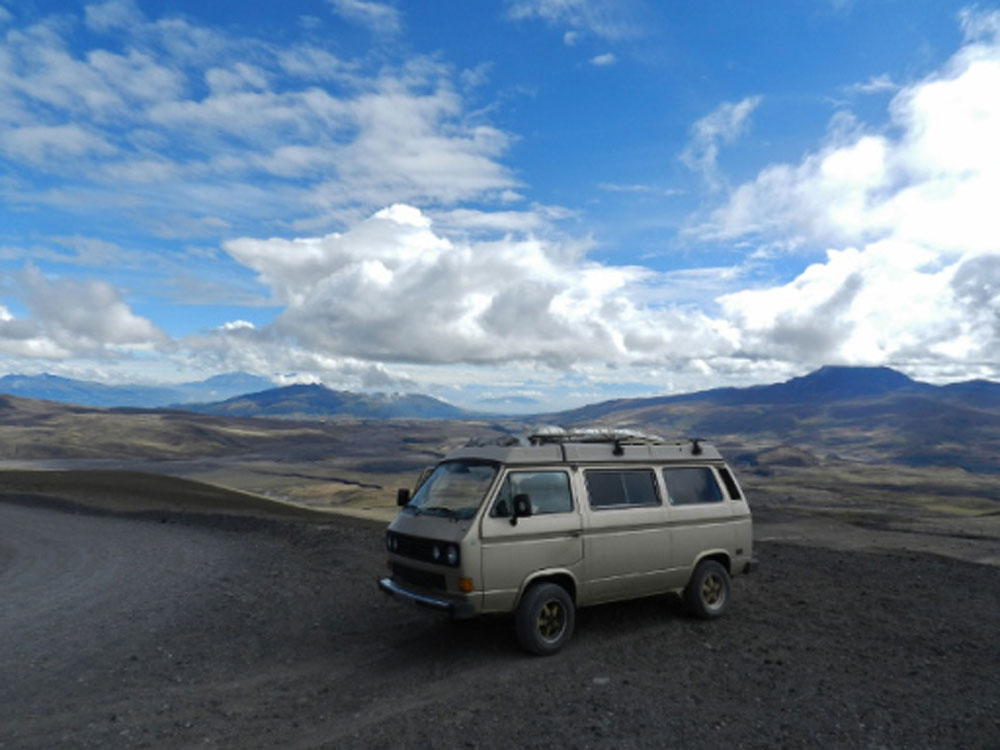 Although it was only 9:30am, clouds had started to roll in and cloak the volcano. Instead of walking the rest of the way to the parking lot and then hiking an hour up to the Refugio in the clouds, we decided to try again tomorrow with an extra early start when the skies would be perfectly clear. Defeated by the mountain, we cruised the van back down to 12,000ft and did a little stroll around Laguna Limpiopungo, a high altitude lake with high altitude gulls surrounded by pretty grassland with little purple and yellow flowers. 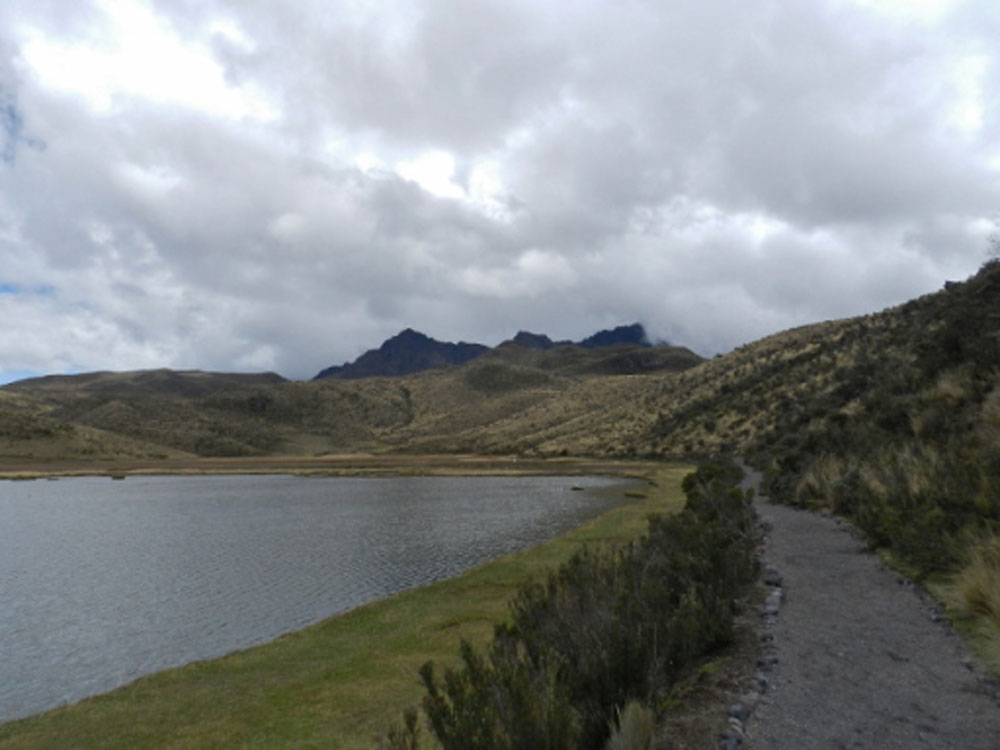 The next morning we ambitiously woke up at 6am to a thick blanket of fog. When Cotopaxi did momentarily peek through the clouds, we saw that overnight it had been blanketed by a powdery layer of fresh snow. Oh well, we decided to do the hike anyway. It’s not often that you have a chance to climb an ice volcano.

We set out up the road and the van slowly but surely made it all the way to the parking lot this time. With clouds all around us, we bundled up in all the warmth we had and set off. We slowly trudged through the dark sand which made up the slope of the volcano. With every step forward we would sink in and slide half a step back, making for slow progress. After stopping more than a few times to catch our breath in the thin air, we made it to the refuge and warmed up with some cheese sammies and hot chocolate. From there we hit the snow and slowly trudged further up the volcano until we reached the glacier. 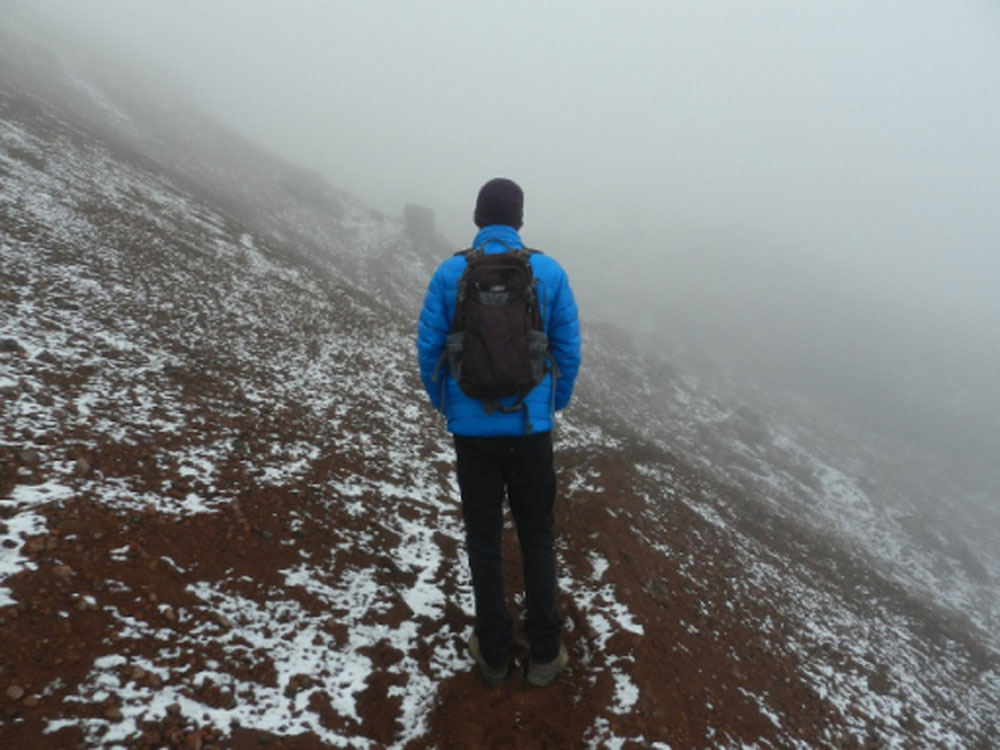 At this point, we were being pricked by cold, wet mist so we snapped a few photos and made our way back down the volcano as fast as we could. Having been at over 16,000ft and as close to mountain climbing as we’ve ever come was a pretty exciting feat for us! 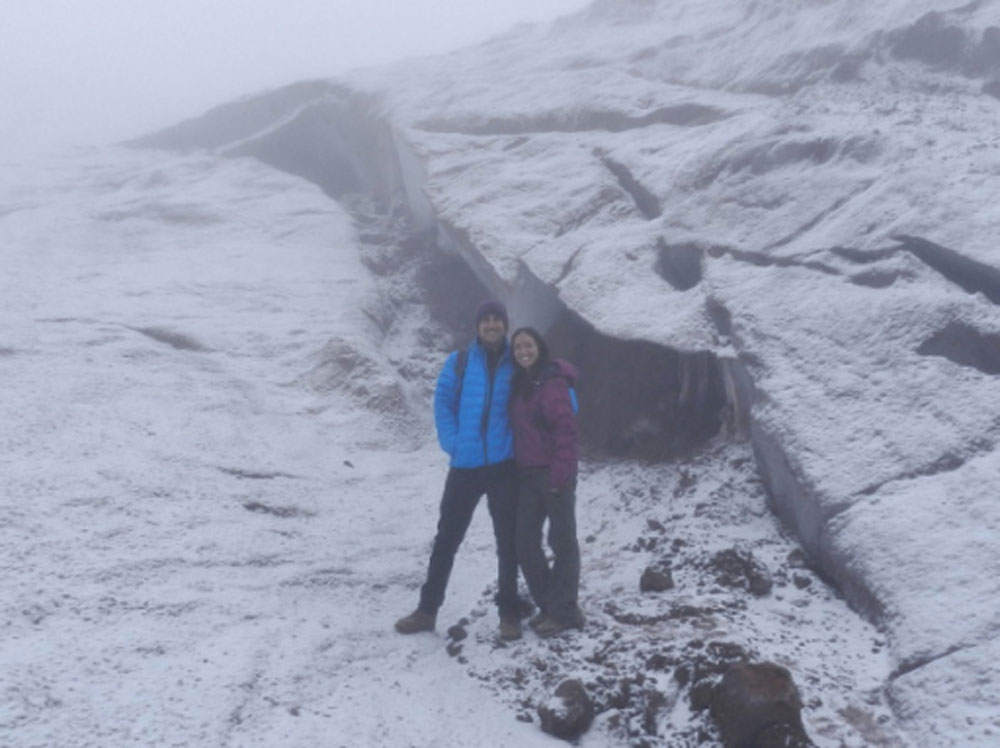 Since we can’t get enough of volcanos these days, we hopped into the van and headed west to Laguna Quilotoa, a lake in the crater of an old volcano. The road winded through dry mountains covered in a patchwork of fields spotted with grazing sheep. 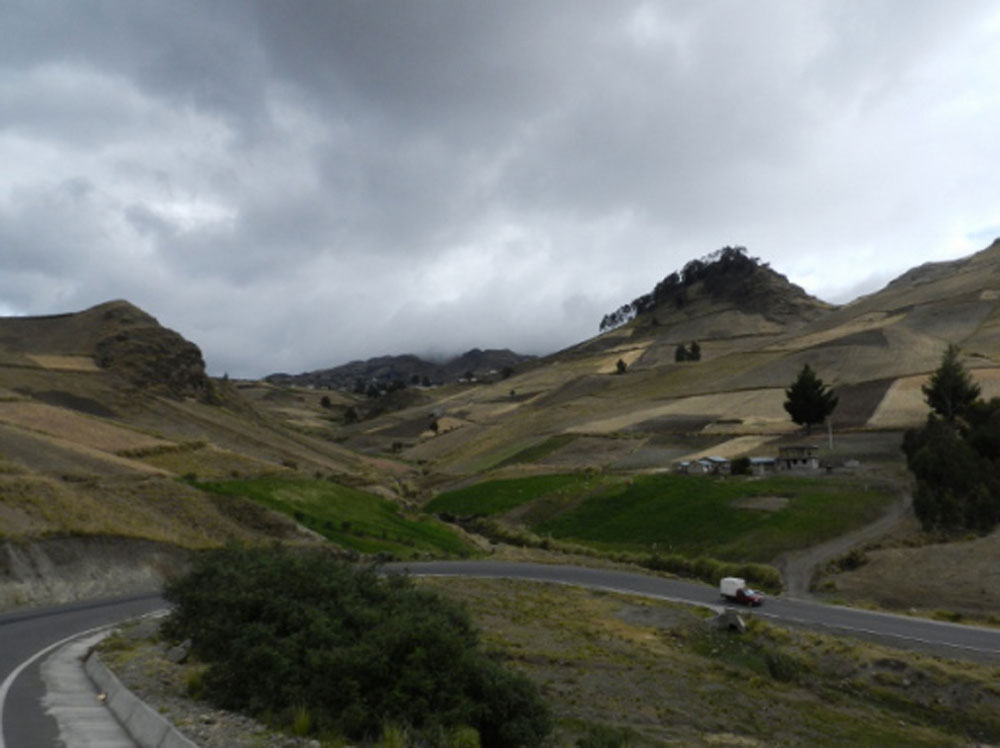 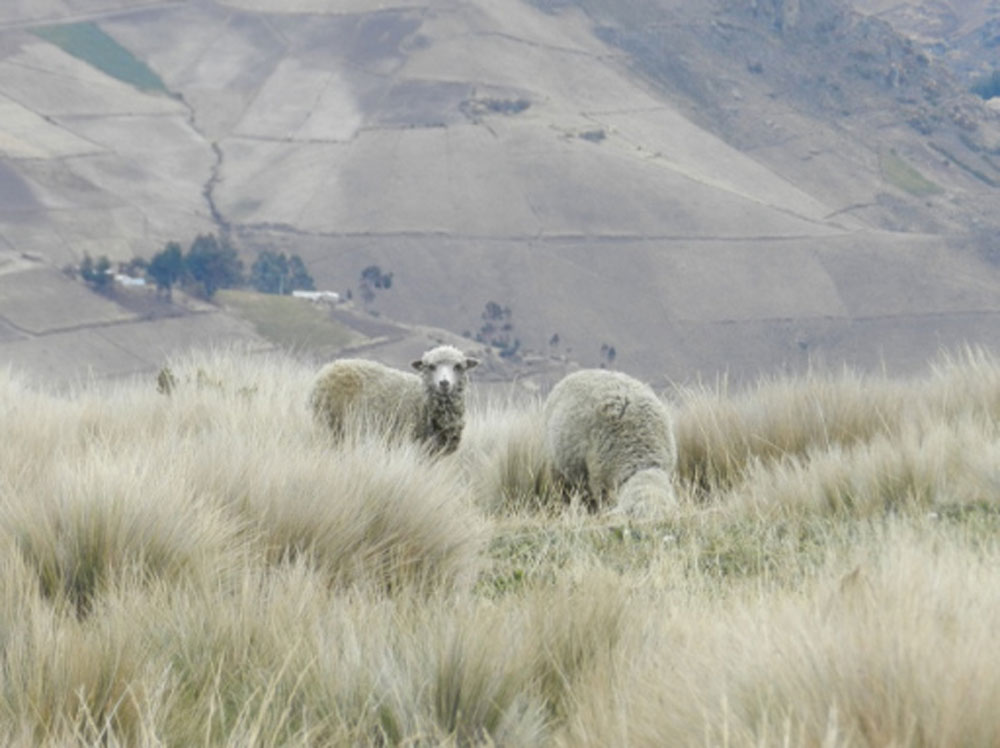 The entire day was rainy and grey but when we arrived at the edge of the crater we were surprised by the gorgeous view of the teal lake. 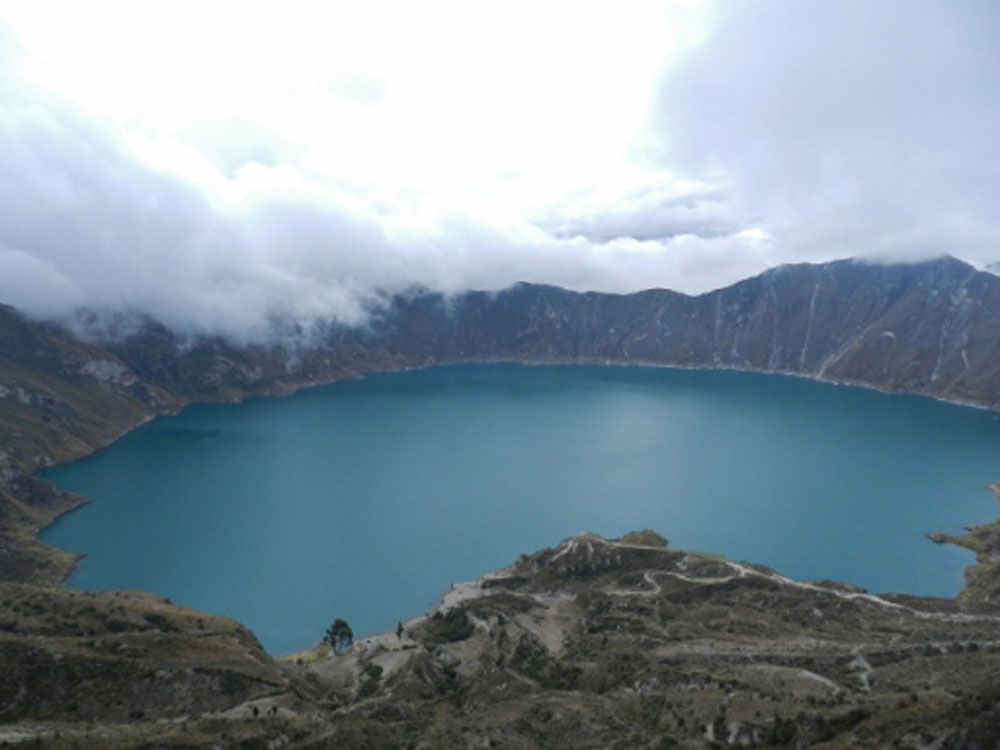 We saw some tents on the lake shore down below so we packed our packs and hiked down into the crater to camp for the night. 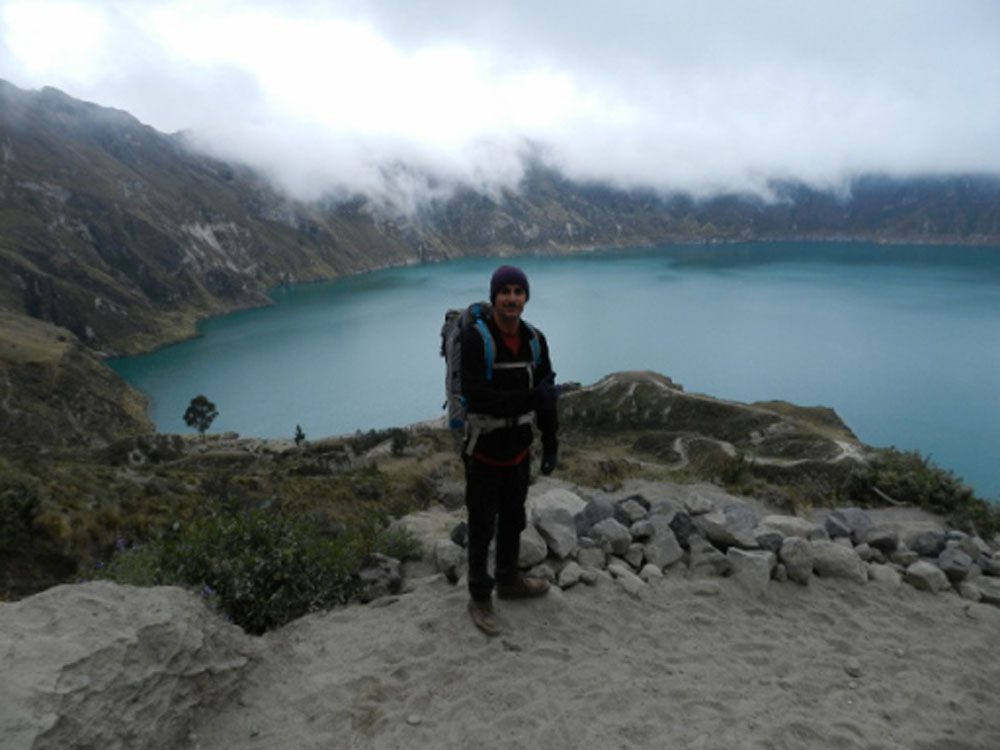 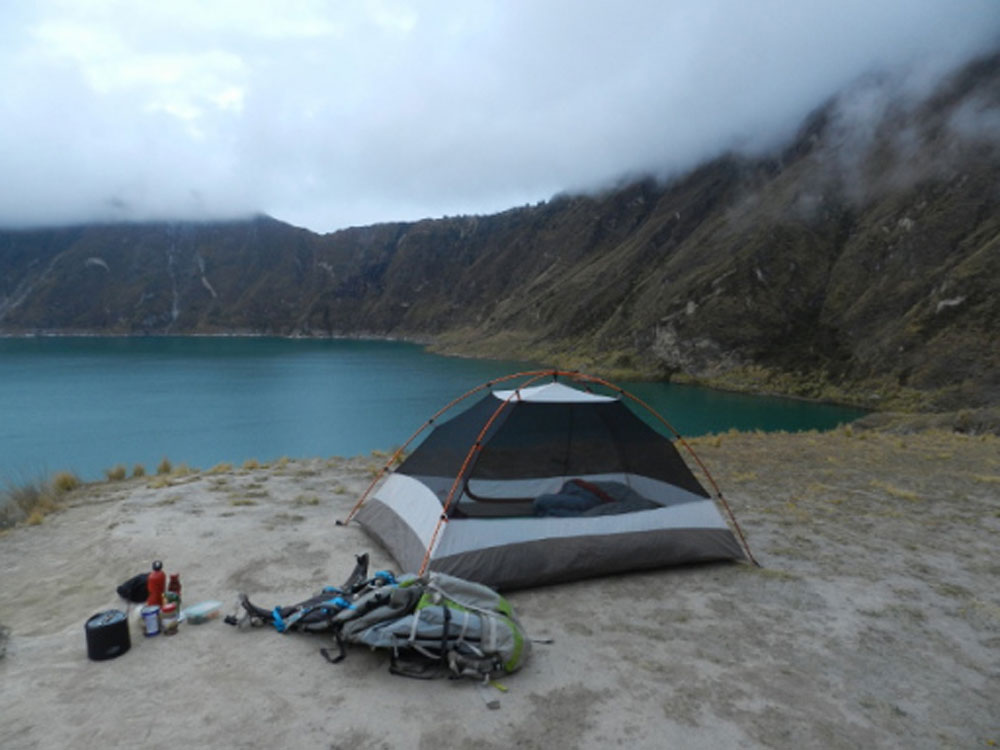 At night the skies cleared and we popped open a box of the ever-so-classy Clos wine, a staple on this trip, and watched the stars flickering in the sky. In the morning the lake shone brilliant cobalt blue in the sun. After some coffee and granola bars we hiked up and out of the steep crater, enjoying the views of the lake along the way. 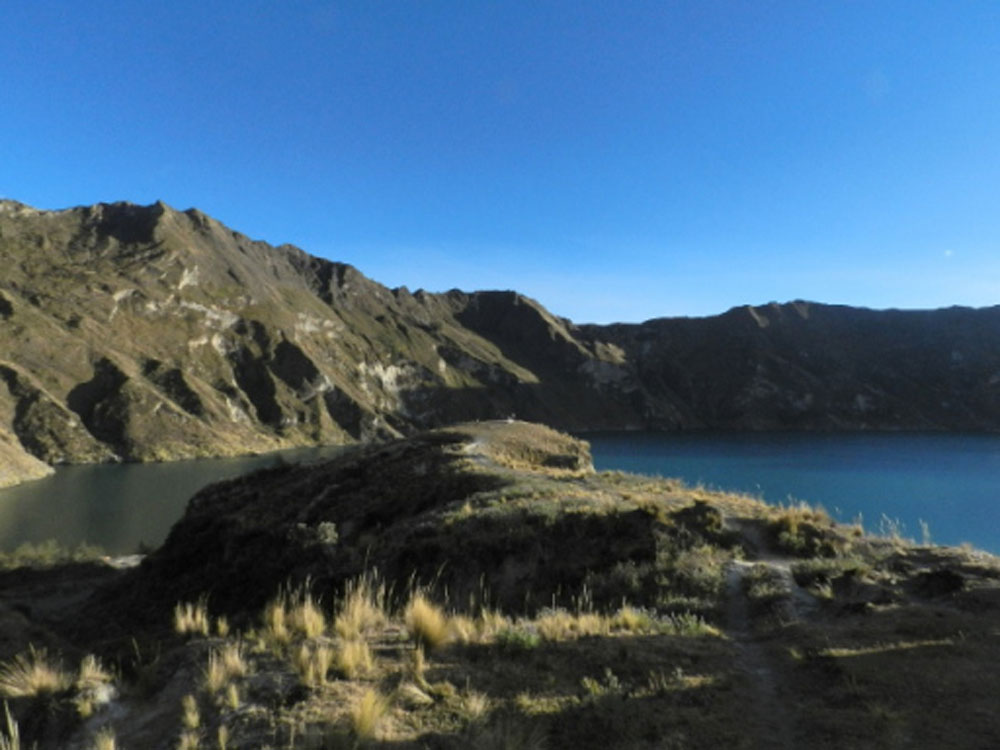 Our campsite on a little hill overlooking the lake

Next, we excitedly head for the coast to search for waves and blue footed boobies!

If you think you’d like to have a similar adventure, Linda and Aron plan to sell their van once they arrive at the southern most portion of their travels. Details can be found here:VW Van for Sale

The Americas with Tubby Xplorer, Part III - The Adventure Begins 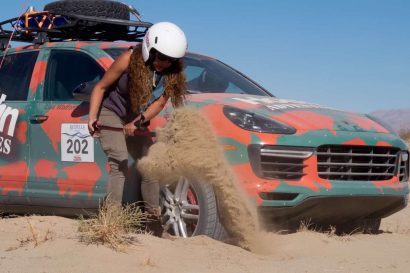 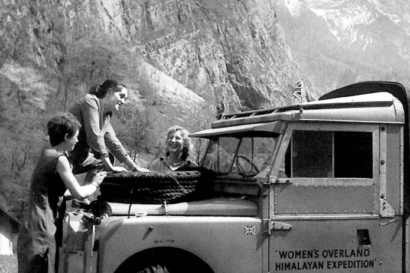 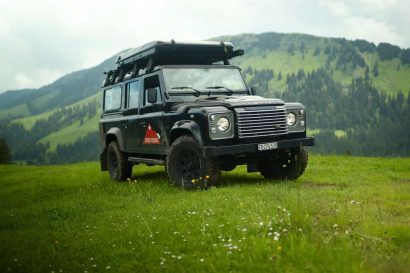 Touring the Swiss Alps in a Defender