“It can’t be done.” The challenge in these words has motivated adventurers since the dawn of time. But the earth’s poles have been conquered, Everest has been scaled, and the seas have been sailed. What remains to quench the thirst of modern man for grand achievement? For Bill, in the absence of a Darien Gap between Oklahoma and Arizona, it is Mills Canyon.

The high plains of northeastern New Mexico hide their secret well. In the infinite sameness of grass and antelope, what would lure the traveler away from rapid forward progress on a fine strip of asphalt on the way to somewhere else? Visually, nothing. But Bill and I had heard rumors of Mills Canyon, and it draws us off the highway on a voyage of discovery 60 miles west of Clayton. 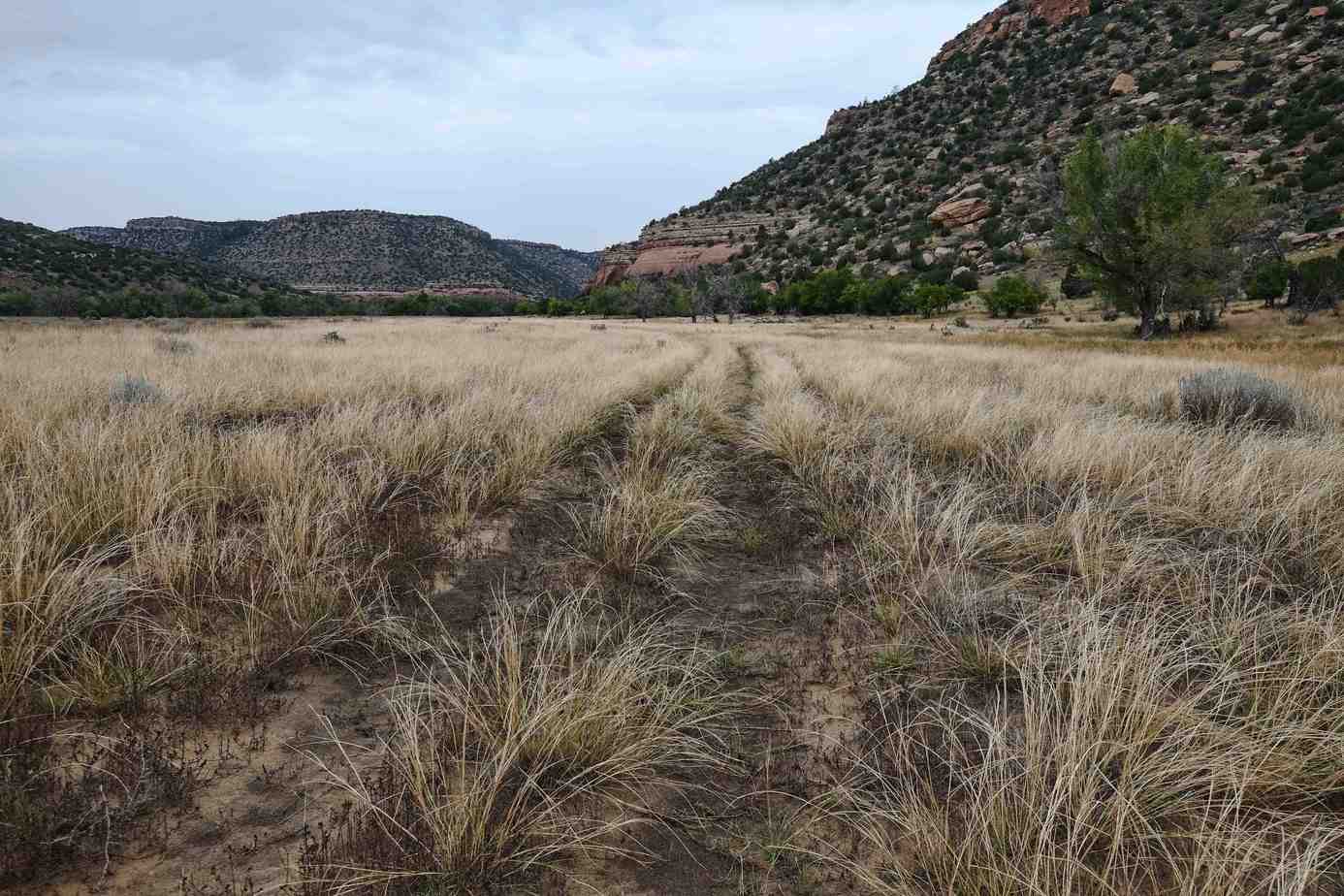 The promise of treasure keeps us moving, though the landscape doesn’t change as we drive south in our Tacoma to the ghost town of Mills. A few abandoned houses and a windmill surround a post office that appears to be occasionally operational, perhaps on a Brigadoon sort of schedule. There we turn west on a dirt road that takes us through the same rolling prairie we’ve been seeing for miles. Although unaware of it, we’ve begun to descend.

We’re now within a 78,000-acre section of the Kiowa National Grasslands, an expanse of shortgrass prairie amid large swaths of ranch land. A few miles west of Mills, the rim of a canyon appears, obscured by the ocean of grass until we’re nearly on its edge. A rough road winds steeply down into the canyon through stands of ponderosa pine, oddly out of place. At the first overlook, we stop to gawk. Below, 600 feet lower than the rim and 900 feet below the last paved road, the Canadian River snakes through the valley, flanked by a broad plain and soaring walls of red sandstone, channeling southern Utah. White streaks of limestone make it evident we’re on the western edges of the geology of the Caprock Escarpment of the vast Llano Estacado. Ruins of a stone building stand alone on the canyon floor, demanding an explanation. The presence of this place is hard to grasp. 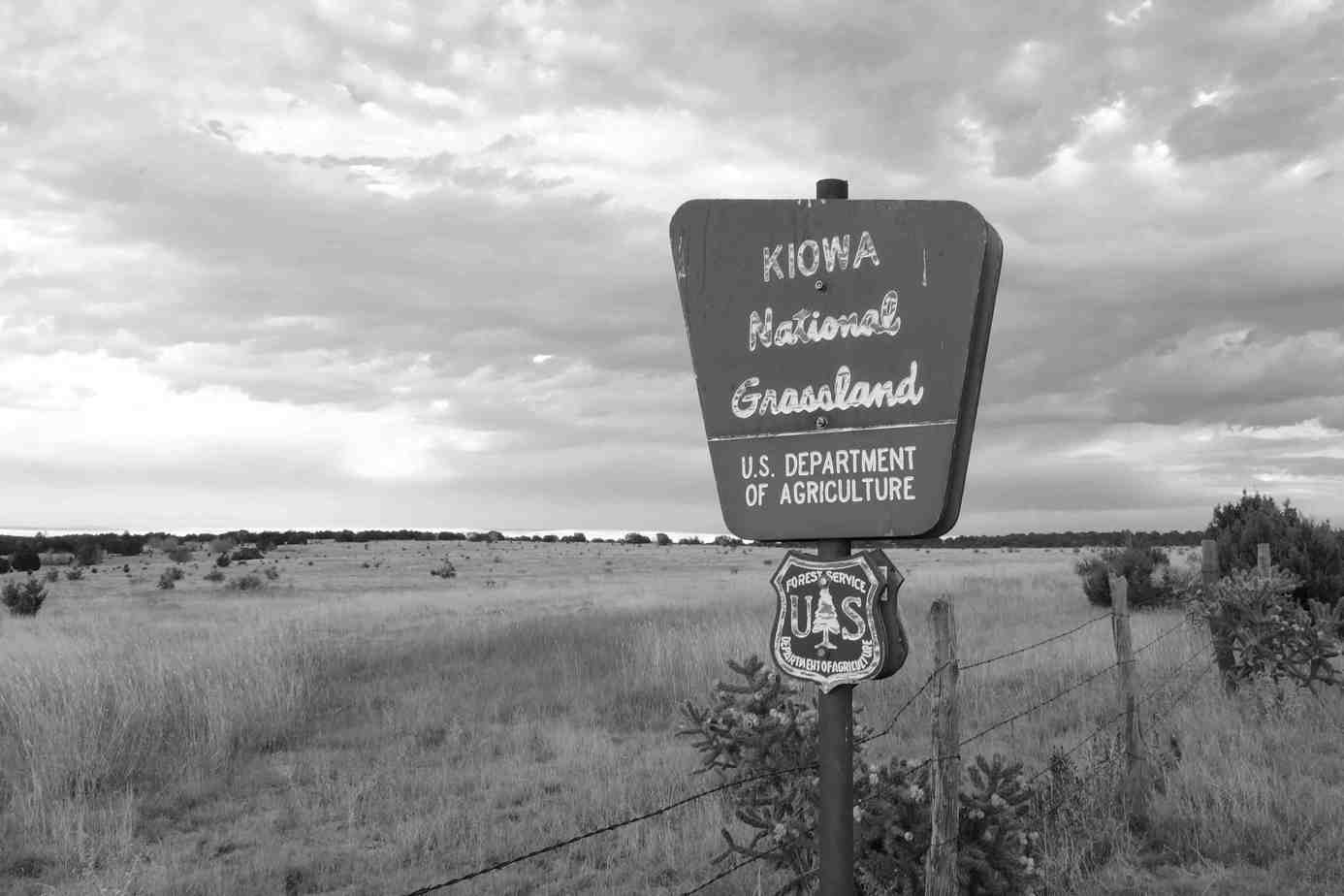 Had we been among the stagecoach passengers who traveled this road in the late 1800s, we would have seen thousands of fruit and nut trees filling this 12-mile section of the Canadian River canyon. Here businessman and legislator Melvin Mills established a flourishing farming operation, including a two-story ranch house built in 1881 which served as a stop for a stagecoach line running through the canyon. A massive flood in 1904 wiped out the enterprise and Mills never recovered from the devastation. Remains of a few buildings, including the ranch house, and some of the trees have survived. The mansion Mills built in nearby Springer still stands; he is said to have died there penniless, allowed to spend his last days in the house because of the generosity of new owners.

On the canyon floor, we explore as far as the truck will take us, camping near a row of large Bois d’Arc trees on the south end. Someone went to a lot of trouble to build a table here, balancing a huge rock slab on a Jenga-like stack of stones. Spring rains on this first visit in May mean the river is high, so we don’t attempt a crossing. Walking south along the east bank, we watch the sun’s last rays set the canyon walls aglow. Other than the coyotes and the deer and critters unseen and unheard, we have the canyon entirely to ourselves in a night of glorious isolation. Our curiosity about the place is piqued. How much can we explore? The idea that a stagecoach road crossed the canyon suggests the other side of the river is a place we must go. 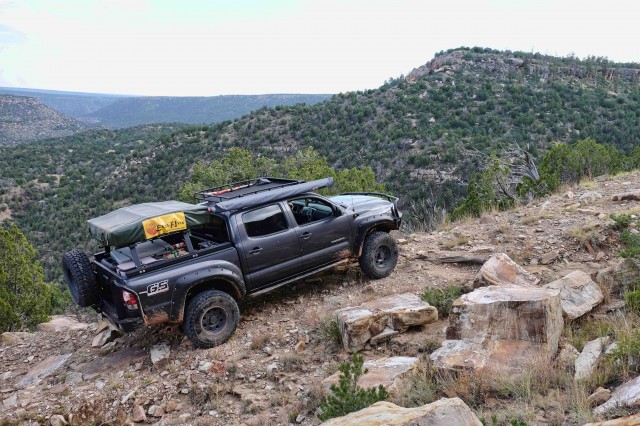 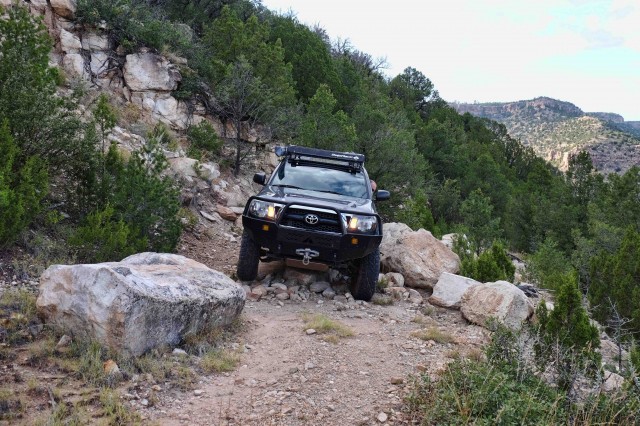 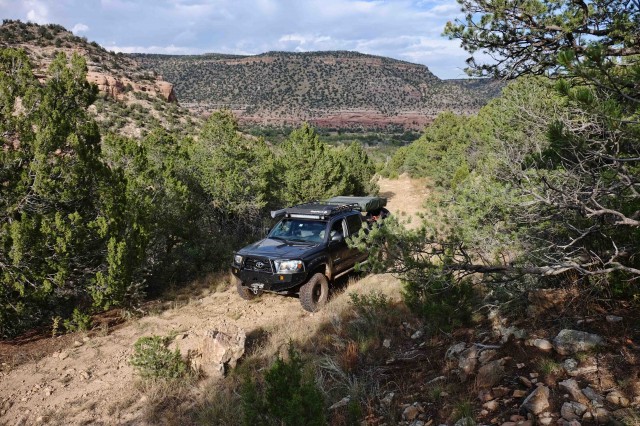 But we’re on our way home to Oklahoma after a trip to Arizona and Utah. More exploration will have to wait. Bill makes another stop here on his motorcycle mid-summer and queries locals. Is there a way to access the canyon from the west? “No, you have to go in and out from the east.” Does the stagecoach road go through? “No, you can’t get through, the road is no longer passable and all the land on the west is private ranch land.” This only whets Bill’s appetite but the river is still high and he’s on his way to Idaho.

That fall, we return to Mills Canyon in the truck, on the way to Colorado but with time built in for a more leisurely stop. Before we head to camp that afternoon, we find we’re able to cross the river on a low-water bridge. On the other side we spy a rocky trail that looks suspiciously like an old road and begin to follow it in the truck. It winds back and forth, twisting up the canyon wall. “This must be the old stagecoach road,” I tell Bill. 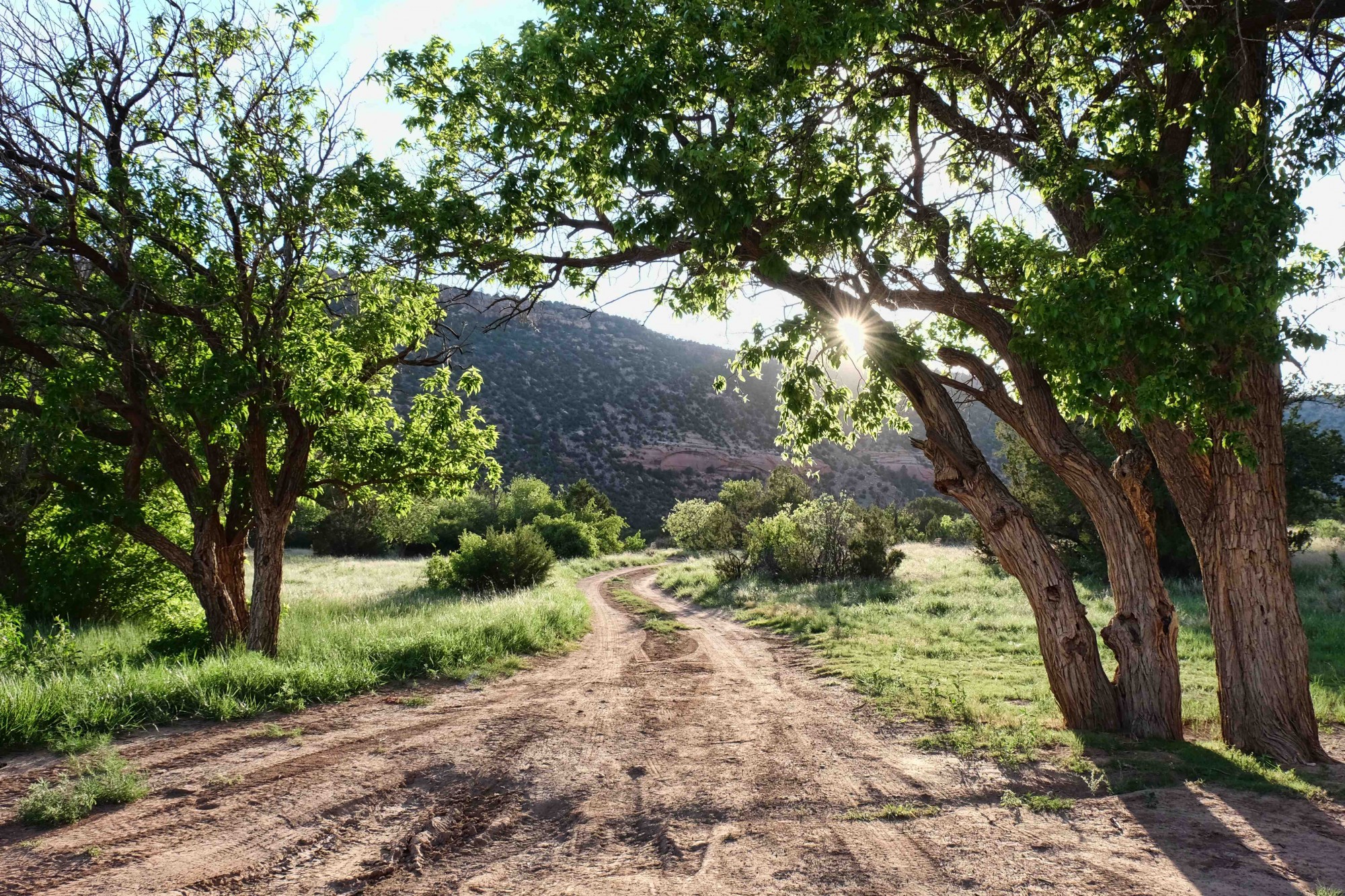 The trail becomes narrow, boulder-strewn, and precipitous. Just the way Bill likes it. A growing belief that this must be the stagecoach road strengthens his determination to reach the top. I prefer to be out of the truck at these times, “taking pictures,” and Bill supposes I have something more to offer by spotting him. I guess that’s true, I don’t want to see him tumble over the edge, so I run ahead and try to direct his track. At one point we reach a pull-out and I foolishly urge him to turn around, which only serves as encouragement for him to keep going. Bill admonishes me to continue taking pictures, no matter what else happens.

Finally it appears we’re about to reach the western rim. “Do you realize what we’re about to do?” Bill says, gesturing toward what appears to be the terminus. I pray there isn’t some abyss or a giant boulder to challenge him further or, God forbid, turn us back to have to drive back down after dark. Otherwise he’s right, we will have done what they said was impossible. 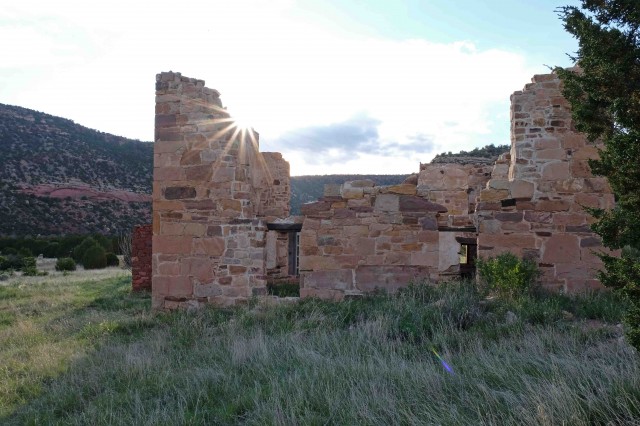 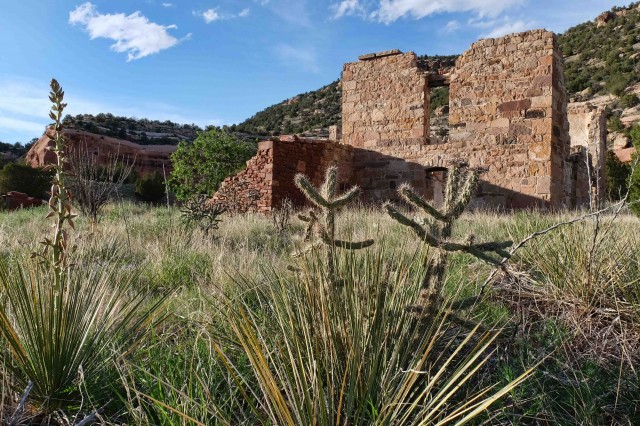 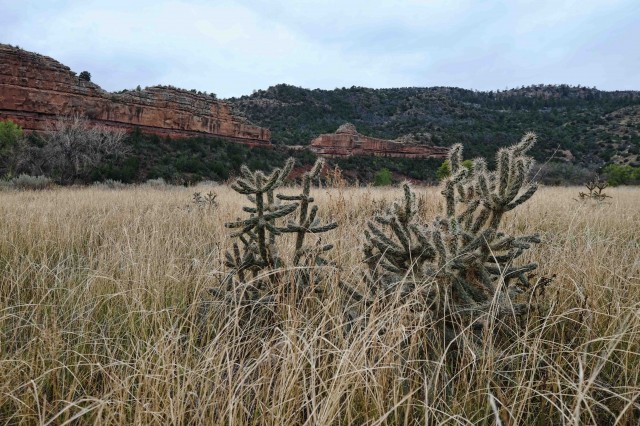 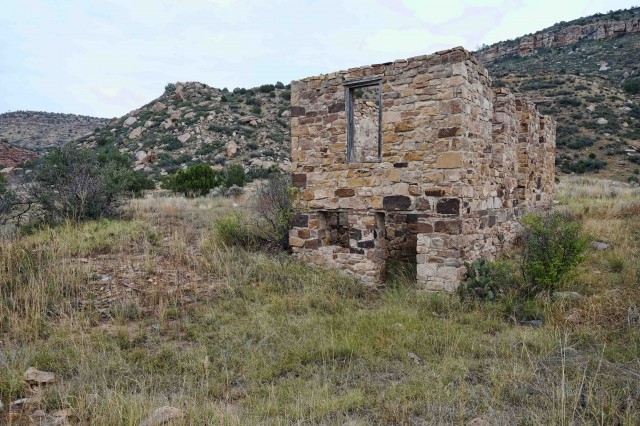 No obstacles present themselves and soon the canyon is conquered and the stagecoach road traversed. But the sun is getting low in the sky — where will we camp? There’s that whole “private ranch land” problem. Bill says he wants to camp here on the western rim but keeps driving, having decided to look for a way through. Tonight.

The road peters out, becoming a sometimes barely visible trail, sometimes multiple paths, sometimes nothing. We are certainly on ranch land, the cattle are a dead giveaway. We stay alert for “Keep Out” or “No Trespassing” signs, prepared to turn around if necessary. There are gates but none are locked and we make sure to close them behind us after we pass. Eventually we find a public road that spits us out onto Highway 120.

It’s nearly dark as we drive east through the broad, spectacular Canadian River Canyon on the highway. We intend to return to the east entrance of Mills Canyon and drive down, setting up camp and fixing supper in the dark. But Highway 120 takes us to the village of Roy, New Mexico, and on its north end we pass the Mesa Hotel. We’re out of town before we pause to consider — what if we just stayed there? Not camping often feels like a failure but as long as we didn’t actually plan to stay in a hotel, couldn’t it still be part of the adventure? We convince ourselves that it’s okay and turn back. The place has a Bates Motel sort of feel. Just the edginess we were seeking. 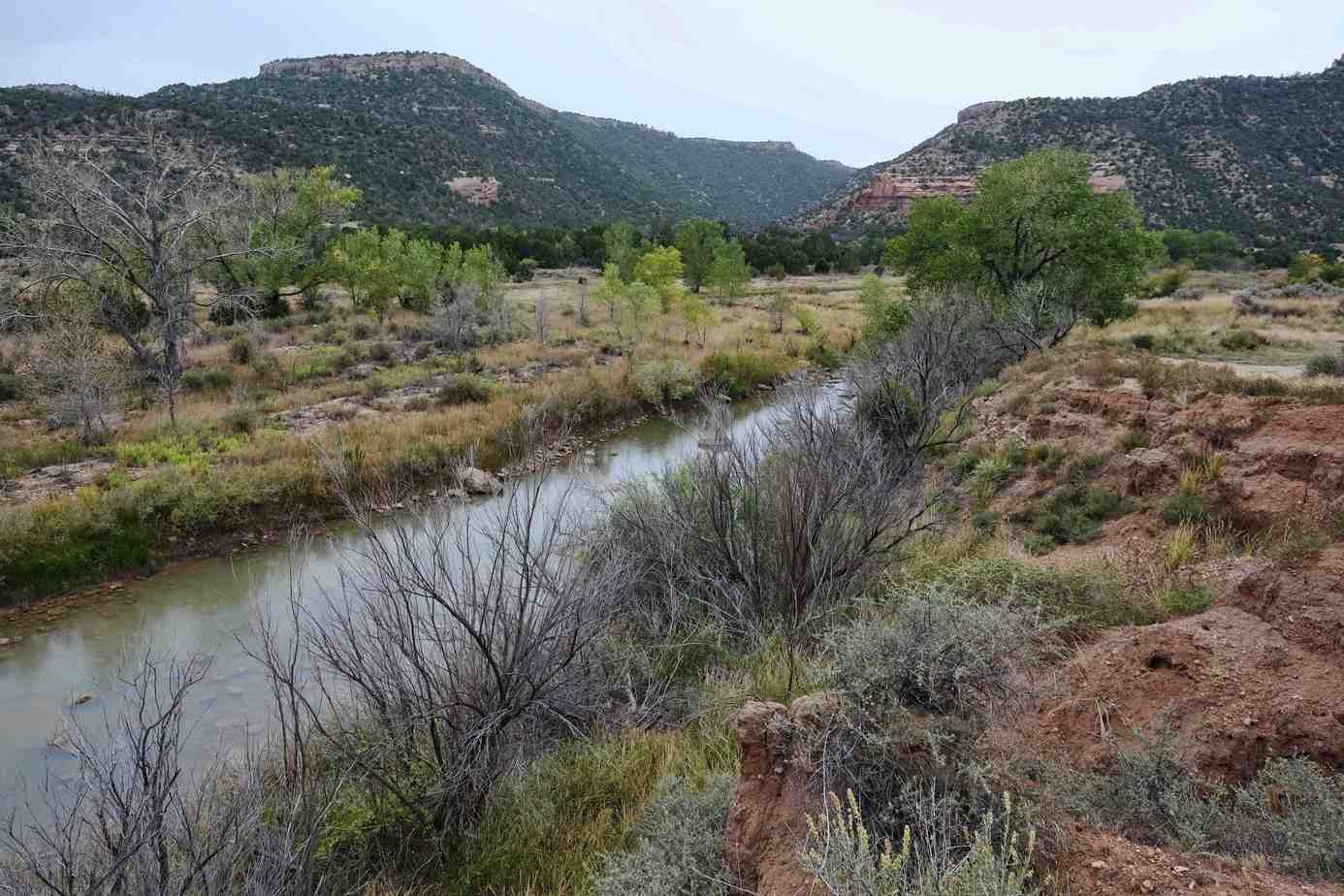 We find the proprietor in the hotel basement cleaning up in a cafe, now closed. Clearly not a knife murderer, she kindly rents us a room ($45 with bath/$40 without) in the 1920s-era inn. We are the only guests but our room is clean and comfortable, the plumbing and heat work well, and we can enjoy that pinnacle of civilization, good WiFi.

Once checked in, we walk down the road to the local tavern. Dim street lights cast a yellow glow over the two-lane running through town and a neon sign indicates Scott’s Saloon is open. We’re thankful, having learned it’s the only place in town we can buy food this time of night. Indeed, they sell frozen pizza heated in a toaster oven and that’s our dinner, along with a couple of cold Coronas. We enjoy the friendly atmosphere — as we walk in, a man at a table full of locals offers, “Welcome to Roy.” No sense trying to hide the fact that we’re strangers. 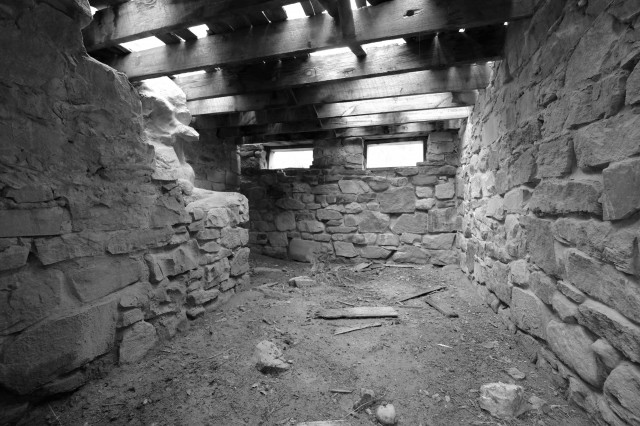 The next day we drive to Springer and locate Mills’ mansion. It still stands stately and looks solid and there’s a phone number posted outside, perhaps for tours. But we have someplace else to be, so we move on. A week later, we return to Mills Canyon on our way home to spend another night with the canyon all to ourselves. Next morning we cross the river and scramble on foot through a creek blocked from vehicle traffic to explore a ruin and walk into the northwestern reaches, looking for vestiges of the orchard. This place would be a paradise for hikers willing to bushwhack and maybe we’ll come back and do just that. Meantime, it still feels like our own hidden treasure, and perhaps Bill will be satisfied with having conquered that stagecoach road just once. But I doubt it.

Susan Dragoo is writer and photographer; runner and backpacker; lover of history, travel, and the outdoors; and combines all those elements into her adventures at every opportunity. Visit susandragoo.com for more.