My first introduction to Subaru was a rally-ready “bugeye” WRX I happened upon while visiting a Jeep dealership many years back. It looked like a blast to drive, but I was too wrapped up in the rock crawling thing to give it a second thought. Somehow, that bugeye stuck in the back of my mind, and years later when Scott asked if I’d like to take over the ExPo Forester project I immediately thought “oooh, FUN!”

It’s All Yours, Now Make It Go

The first order of business on our little project was to get the vehicle running. The 2003 Forester had been flogged hard for the first 100,000 miles of it’s life, and the rebuilt EJ251 motor sourced to replace the original motor turned out to have the exact same problem—disintegrated bearings. Our little project was not off to a good start, but clinging tight to Subaru’s reputation for reliability we pressed on. 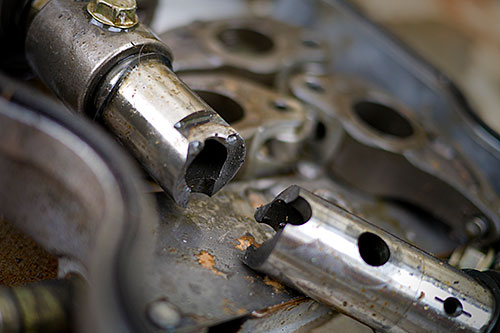 With a little help from our friends at AT Overland I was able to pull the motor and tear it down for rebuilding, then build it back up on the new block over two weekends. The post-rebuild fine tuning tasks such as adjusting the valves and replacing the broken valve guide rod proved simple enough to do in an afternoon. Replacement parts for the EJ251 motor are both cheap and readily available. 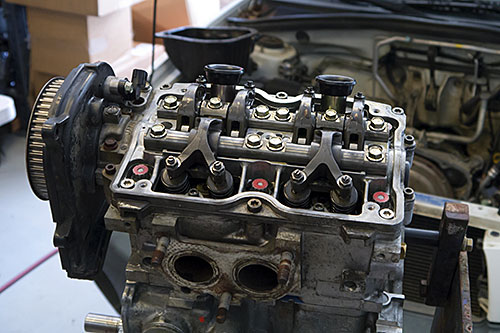 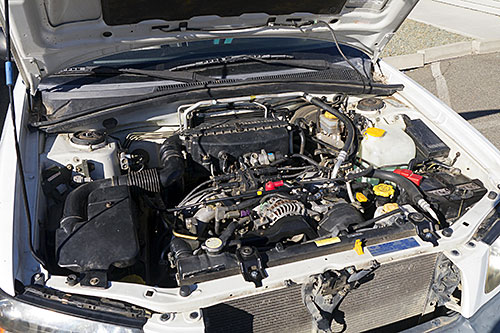 Do I still recommend the vehicle as a budget-minded overlander, after putting in the work to get the car running? Absolutely: it’s very easy to work on with a minimal tool kit and little knowledge, a valuable trait for any adventure vehicle to have. I have complete confidence I’d be able to find and fix any problem I’m likely to encounter in the field. Note: I am not a mechanic—this was my first experience with anything more complicated than a fluid change.

The Most Boring Fun Car I’ve Ever Driven

I’d be lying if I said the Forester was nothing but fun. Driving the twisting mountain roads outside Prescott, tires squealing out in pain through the torture of every turn is fun; launching over cattle guards at foolish speeds is fun; drifting around dusty backroad switchbacks is fun. But when it’s parked, it is one of the most generic looking vehicles ever created… 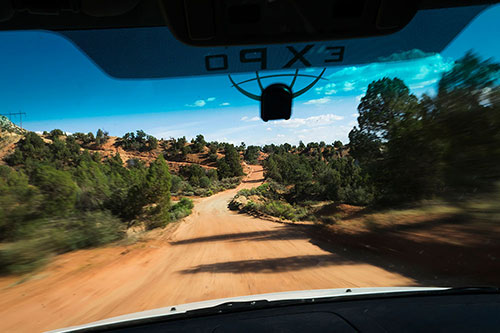 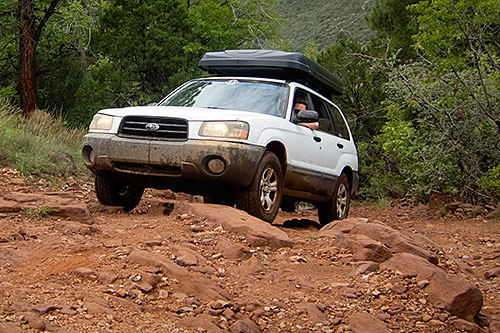 A tastefully built-up SG Forester is a true sleeper. Simple, subtle, and unassuming in it’s appearance; devoid of anything flashy that might hint at adventure or make it stand out from a sea of morning commuters. The looks one gets when the modest little station wagon climbs drama-free to the end of a trail is priceless. Here’s a look at what we’ve done to achieve these results, on a modest budget, and without drastically affecting fuel economy. 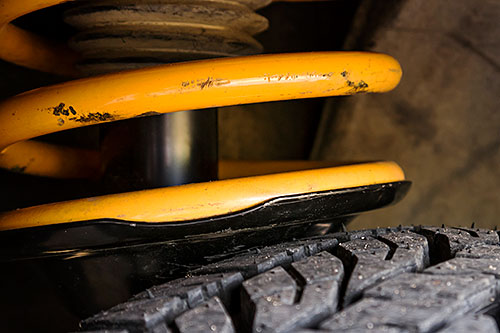 The Forester rides on a set of Ironman’s +35mm springs, which offer a nice firm ride on the pavement with minimal body roll (less than factory), while still being soft enough to feel great at speed over the dirt. The springs are mated to a set of KYB GR-2 struts which while listed as an OEM replacement, are slightly stiffer than stock (a good thing). 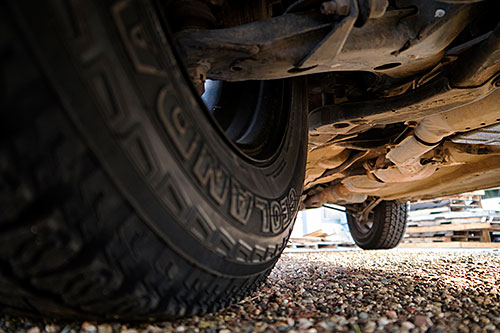 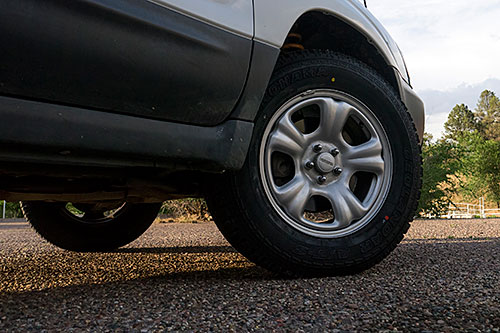 With the extra inch-and-a-half of clearance the upgraded suspension provides, we’re able to squeeze in a set of 215/70R16 Yokohama Geolandar A/T-S tires mated to the stock 16×6.5 steel wheels. The Geolandars strike an optimal balance between on-road performance and off-road grip. The impact to the car’s fuel economy has been minimal. Due to the strut tower’s design, this is the largest tire that will fit with the factory wheel offset and only bolt-on upgrades.

The Forester now has a running ground clearance of 8.7 inches with this combination of lift and tires (for comparison, the same as the 2014 Jeep Cherokee Trailhawk). Fitment is tight, but with a little plastic trimming in well hidden areas we’ve experienced no rubbing whatsoever. We’ve also had the opportunity to catch a little air, and I’m pleased to report the new suspension lands quite gracefully.

As a budget-minded build, each modification has been approached with a wary eye on the effect to fuel consumption. In factory original condition fueleconomy.gov lists the 2003 Forester automatic at 19 MPG city and 24 MPG highway, however a quick look through the popular Subaru forums suggests those estimates to be a bit conservative. With the upgraded suspension settled in and around 5,000 miles on the rebuilt motor here’s what we’ve observed:

Was that a Roof Tent? 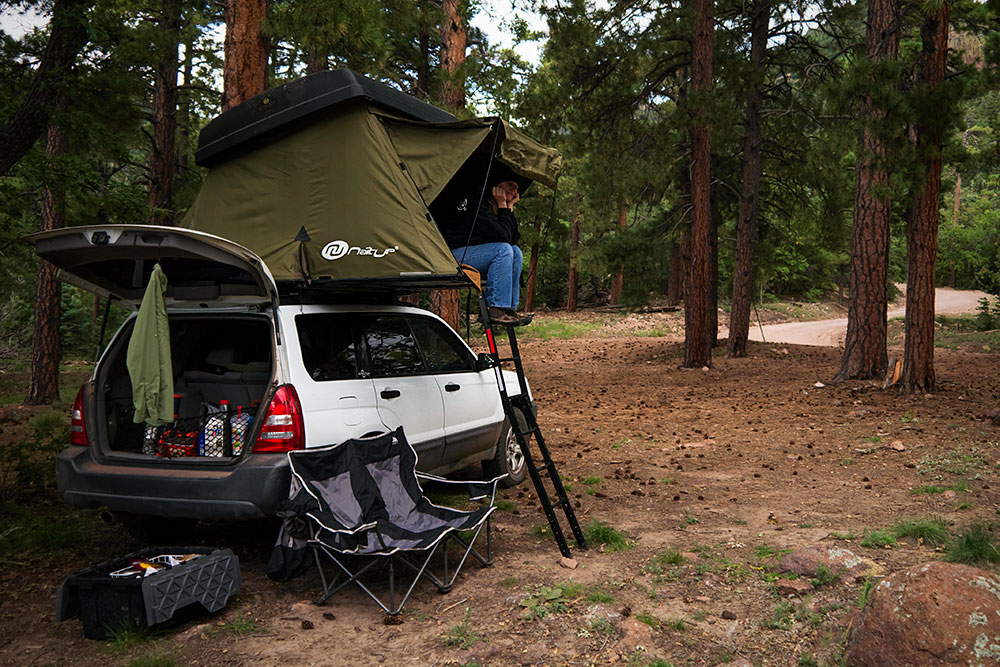 A rooftop tent is not part of the plan on this vehicle build, but being ExPo we just had to give it a try. Surprisingly, the added weight of the tent had only a minor affect on the car’s cornering stability, and twisty mountain roads were still a pleasure to drive. The hit to fuel economy at highway speeds was noticeable, but acceptable, dropping to 22 MPG.

Next we’ll be hooking the Foz up with some underbody armor and other protective additions. Look for part two of this build-up, Protection, in a few months or follow along with the in-progress build thread here »