Author’s note: Because the region is so little known, Coen drew a map with all places mentioned in the piece. We hope you find it useful.

As the word implies, Central Asia lies in the heart of Asia. The region is surrounded by big countries, including Russia, China, and Iran. Overlanding in Central Asia entails traversing lots of land before you even get there. Having been to many of these surrounding countries, I can assure you that this is not a punishment. On the contrary, it will add a lot to your overland adventure.

But for now, let’s stick to Central Asia. The region is also referred to as the Stan countries, or the Stans. In Urdu and Persian “stan” means “land” or “country.” Countless cities and regions in the world have the suffix stan, but only seven countries do: Afghanistan, Pakistan, Kazakhstan, Kyrgyzstan, Uzbekistan, Tajikistan, and Turkmenistan. 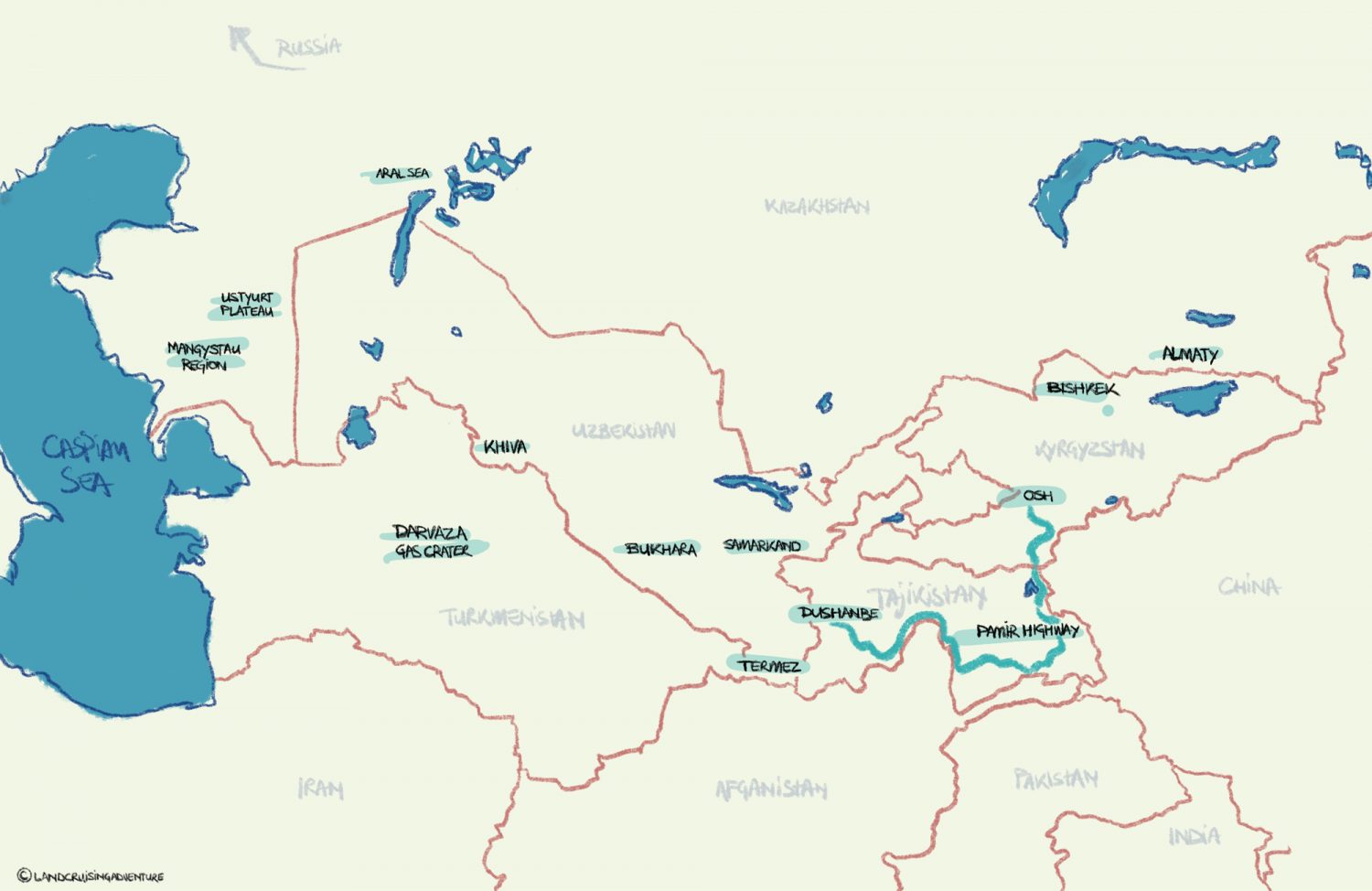 Of these seven Stan countries, five are generally considered to comprise Central Asia (at least in the world of overland travel): Kazakhstan, Kyrgyzstan, Uzbekistan, Tajikistan, and Turkmenistan—five countries that were part of the Soviet Union. When the Soviet Union fell apart, these Stan countries declared independence in the early 1990s. During the first 20 years or so after opening up, visa requirements were complicated and driving through the Stans with your own vehicle demanded detailed planning and obtaining the required visas was time consuming. 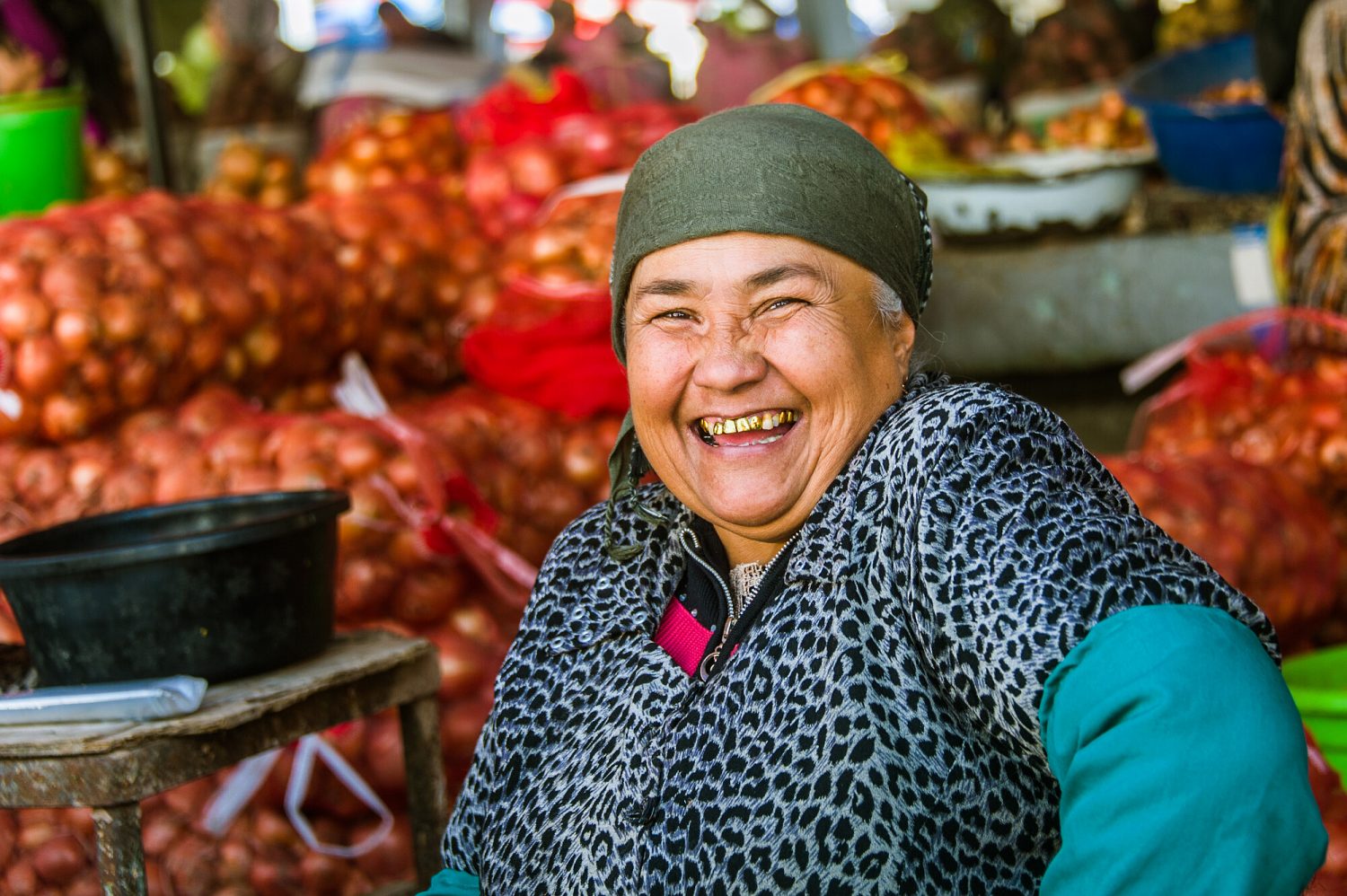 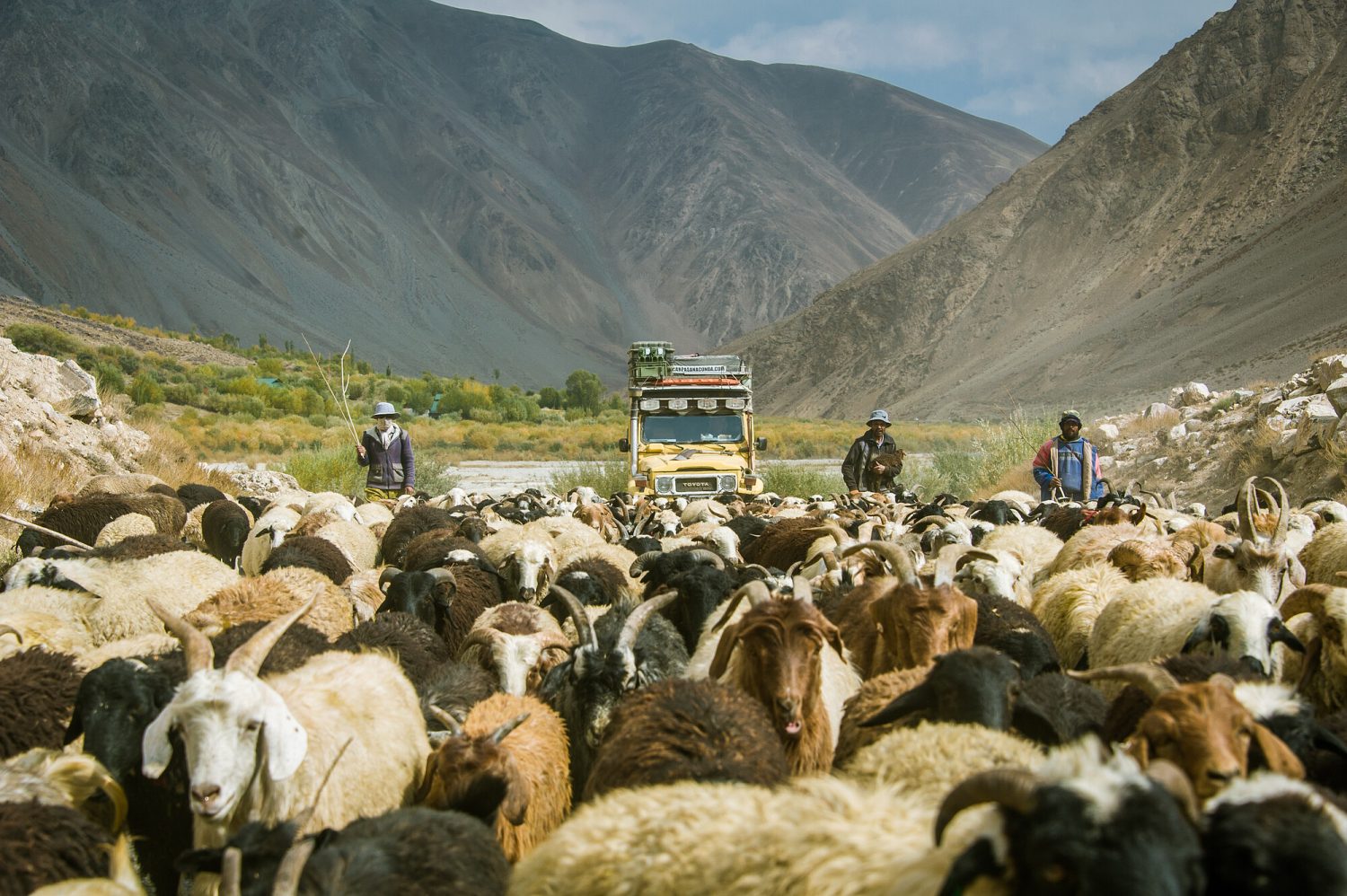 With the exception of Turkmenistan, the region has opened up enormously to tourism over the past decade. Visa procedures have been facilitated or abolished for many nationalities (note: Kazakhstan has temporarily suspended the visa-free regime due to COVID-19), and you don’t need a carnet de passage for your overland vehicle. Caravanistan.com is by far the best source to get up-to-date information on paperwork requirements and provides lots of other good info about the region.

As to Turkmenistan, you can get a tourist visa but it comes with an organized tour. Overlanders depend on a three- or five-day transit visa and no change is in sight with the current regime. Uzbekistan still has some kind of mandatory registration system, but since this is changing, best check on the status with fellow overlanders or caravanistan.com by the time you get there.

The Central Asia region is as fascinating as it is diverse, and here’s why you may want to add it to your Bucket List of Overland Itineraries.

The Variety of Landscapes

With a total territory of 1,545,741 square miles and a density of 49 people per square mile, Central Asia has a lot of empty space. Expect to be spending a lot of time in your vehicle, no matter which Stan you travel in. Distances are huge, and driving times are long either because you are driving in the mountains or because of bad roads or lack of roads. For some this is part of the deal, for others this is what overlanding is all about. 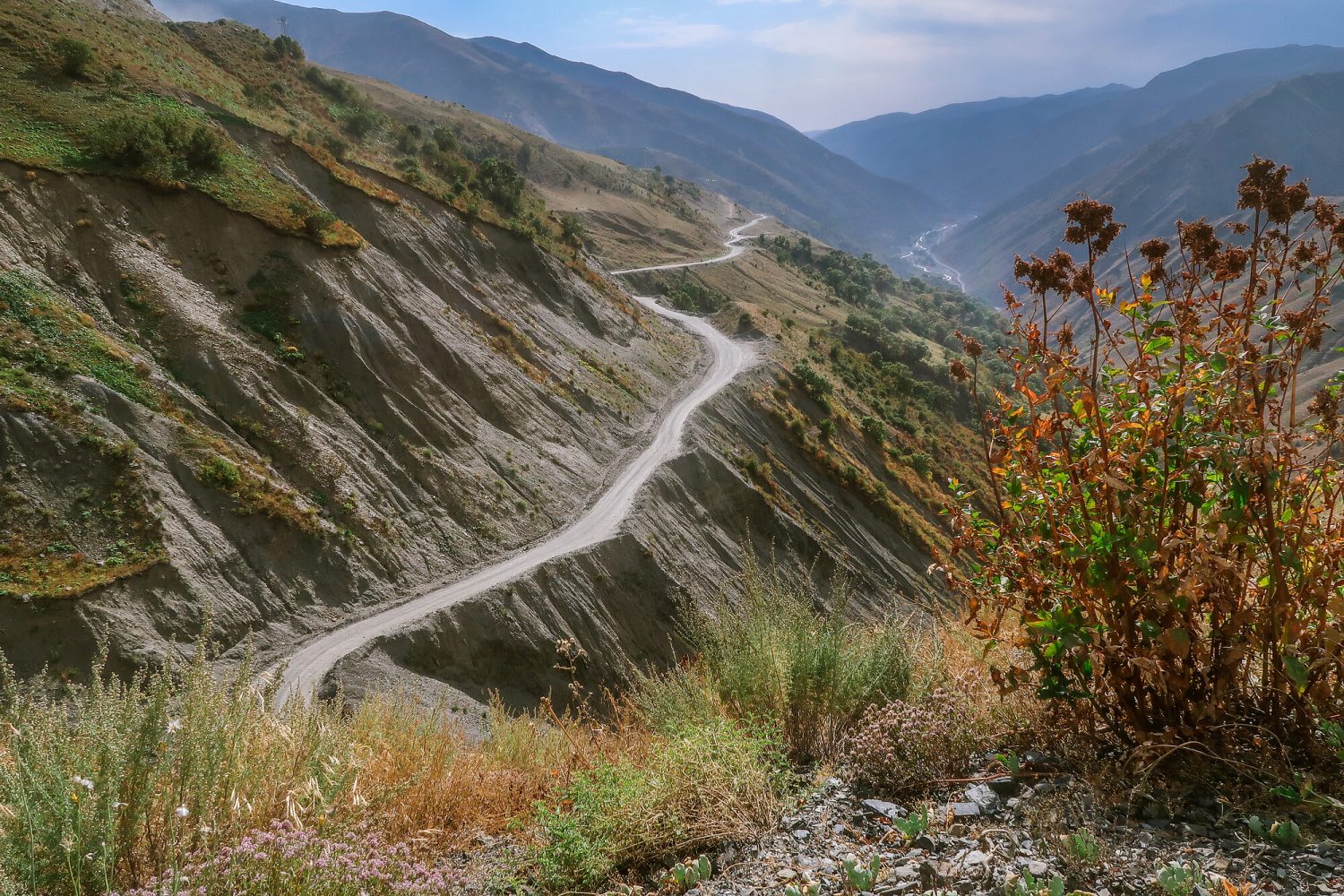 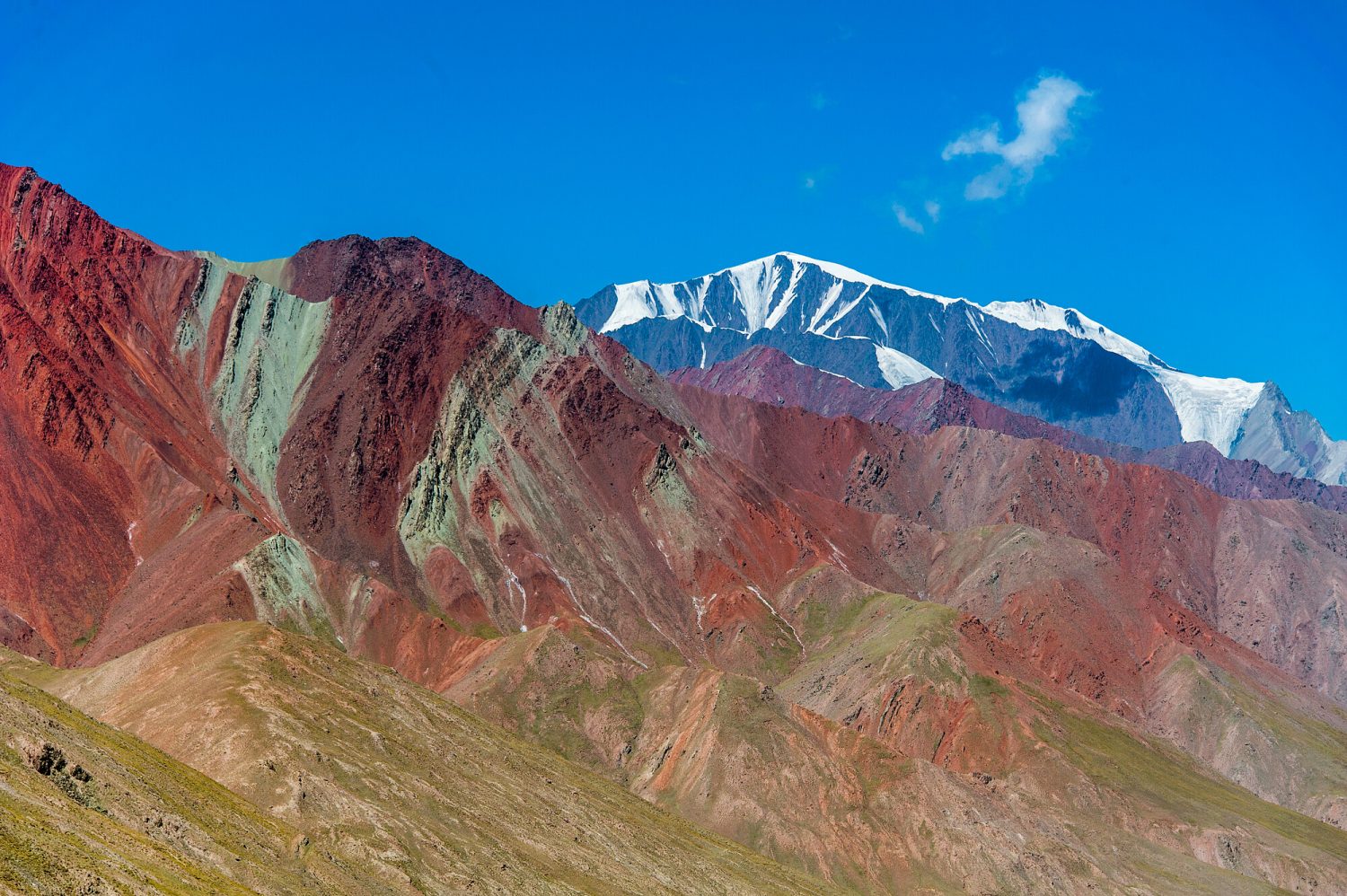 Kazakhstan and Uzbekistan are lowest on the list for landscape points. Fascinating as the vastness and emptiness of the steppe and deserts are, monotony is bound to set in as you watch the sun rise, watch the sun set, and see darkness falling, all while still driving through identical scenery.

That doesn’t mean there is nothing at all of interest to see or adventure to be had. On the contrary. Put on your list:

– Go off-road and drive across the dry Aral Sea (in both countries).

– Don’t miss out on the overland jewel of Kazakhstan: the Mangystau Plateau with the Ustyurt National Preserve in western Kazakhstan. Home to clay and stony desert full of chalk rocks eroded in fascinating shapes, this is a region to have a true adventure, but also one to be well prepared for (water, food, fuel, recovery gear). Stay tuned for a future Overland Journal article in which the region will be featured.

– In southeast Kazakhstan and the eastern part of Uzbekistan, the plains make way for stupendous mountains, which run into the adjacent countries of Kyrgyzstan and Tajikistan. 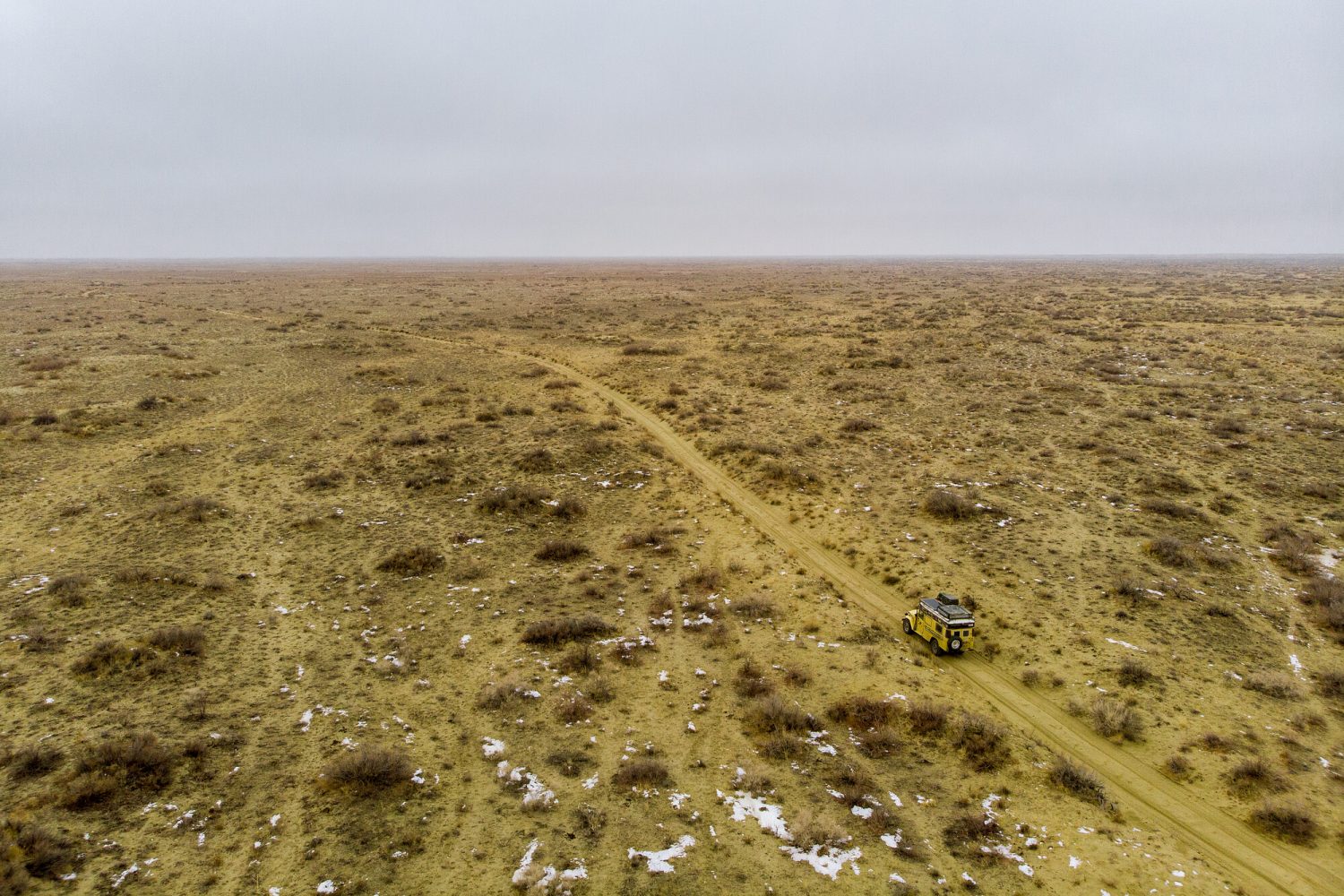 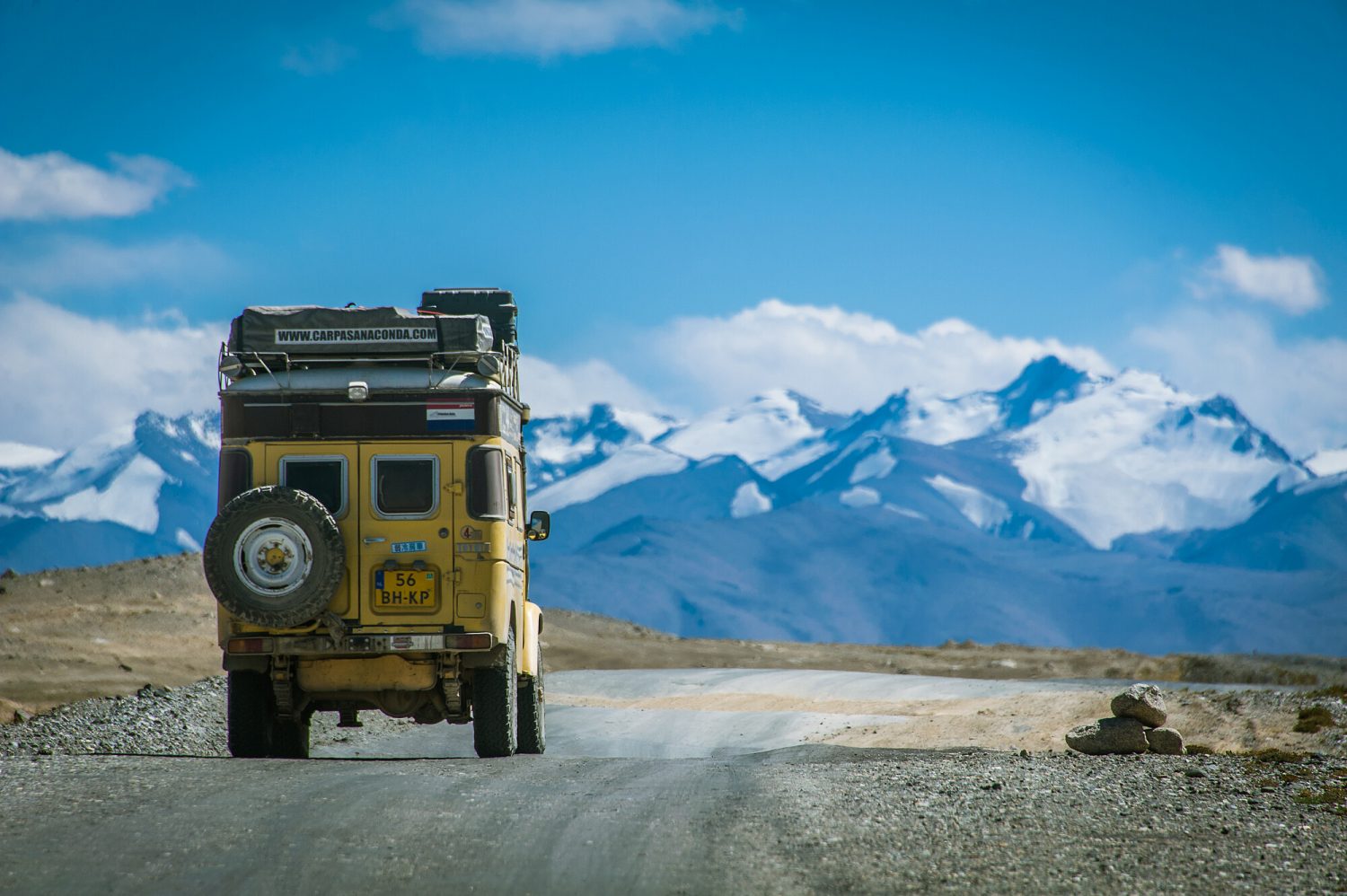 Are you into exploring mountains? Kyrgyzstan and Tajikistan is where to go—by car and bicycle, as well as on foot because hiking trails abound. Smooth stretches on asphalt alternate with laterite roads that may deteriorate into washboard or rock-strewn paths. From low-altitude mountains you climb to 13,000 feet and higher (take time to acclimatize).

Swim in mountain lakes, go for a hike, wild camp in magnificent settings, meet the kind and hospitable people who live in the remotest of hamlets. Summers are short, so plan accordingly.

Turkmenistan has one landscape feature that is unique in the world: the Darvaza Gas Crater, also known as the Door to Hell. Somewhere between the 1960s and 1980s (yes, odd that the dates are uncertain), the Soviets tried to extract oil from the site but they found a gas pocket. The ground collapsed into a massive crater and the engineers decided to burn off the gas, which should have taken a couple of weeks. However, today it is still burning. This is the main attraction for overlanders in Turkmenistan (as you get only a three- or five-day transit visa and choices are limited) and the Davaza Gas Crater offers a unique location to wild camp.

Until the early 20th century, the region was largely inhabited by nomads (the Soviets, who took control of the region in that period forced the nomads to live in settlements, ending an ancient way of life in the area). From that lifestyle, few tangible objects remain, but there are a few places where nomads did leave signs of habitation. Among them are graveyards with richly engraved tombstones and remarkable underground mosques in the Mangystau Region, as well as rock paintings in southeast Kazakhstan. 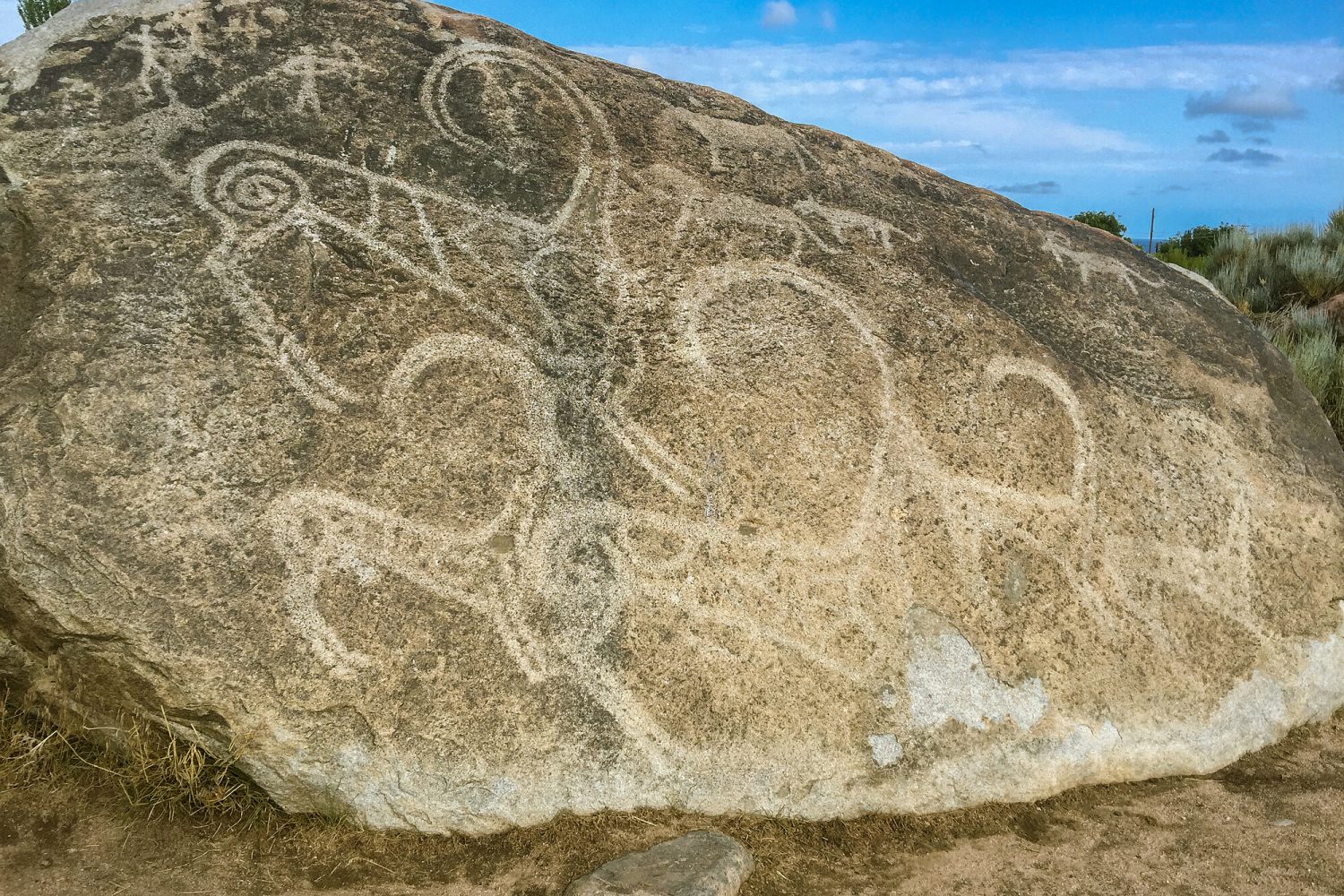 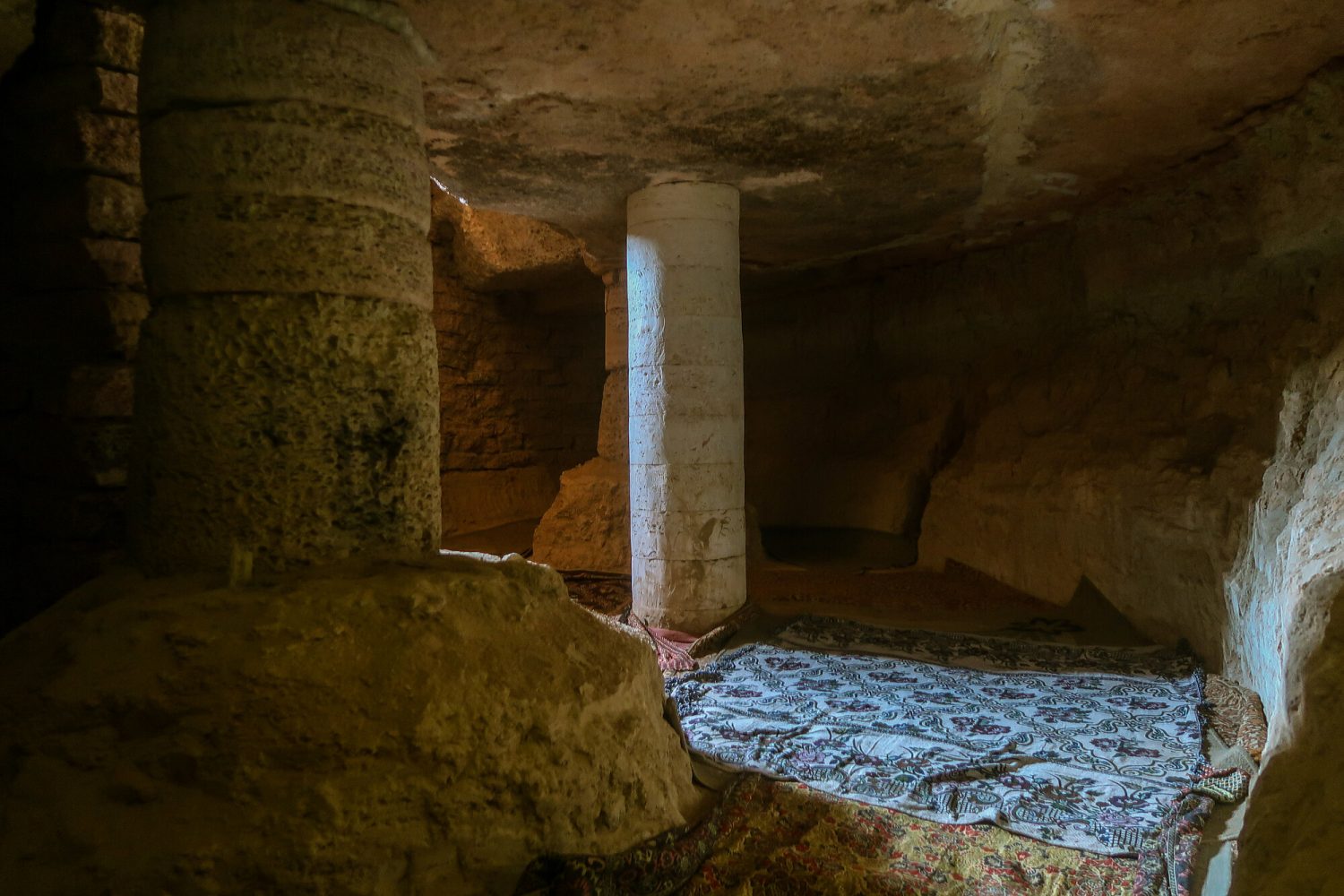 Parts of the region were inhabited, though, and these became important hubs of trade during the Silk Road era. For this part of history, Uzbekistan is on your list. Home to UNESCO World Heritage Sites, the cities of Samarkand, Bukhara, and Khiva all display the richness of the Silk Road era. Monuments, mosques, madrasas, rich merchants’ homes, and tombs are covered with gorgeous blue and aquamarine tiles. The old town of Khiva is an ancient fortress and parts of the old town of Bukhara are characterized by narrow, winding streets and a variety of architectural masterpieces (do expect lots of tourist shops in both towns). 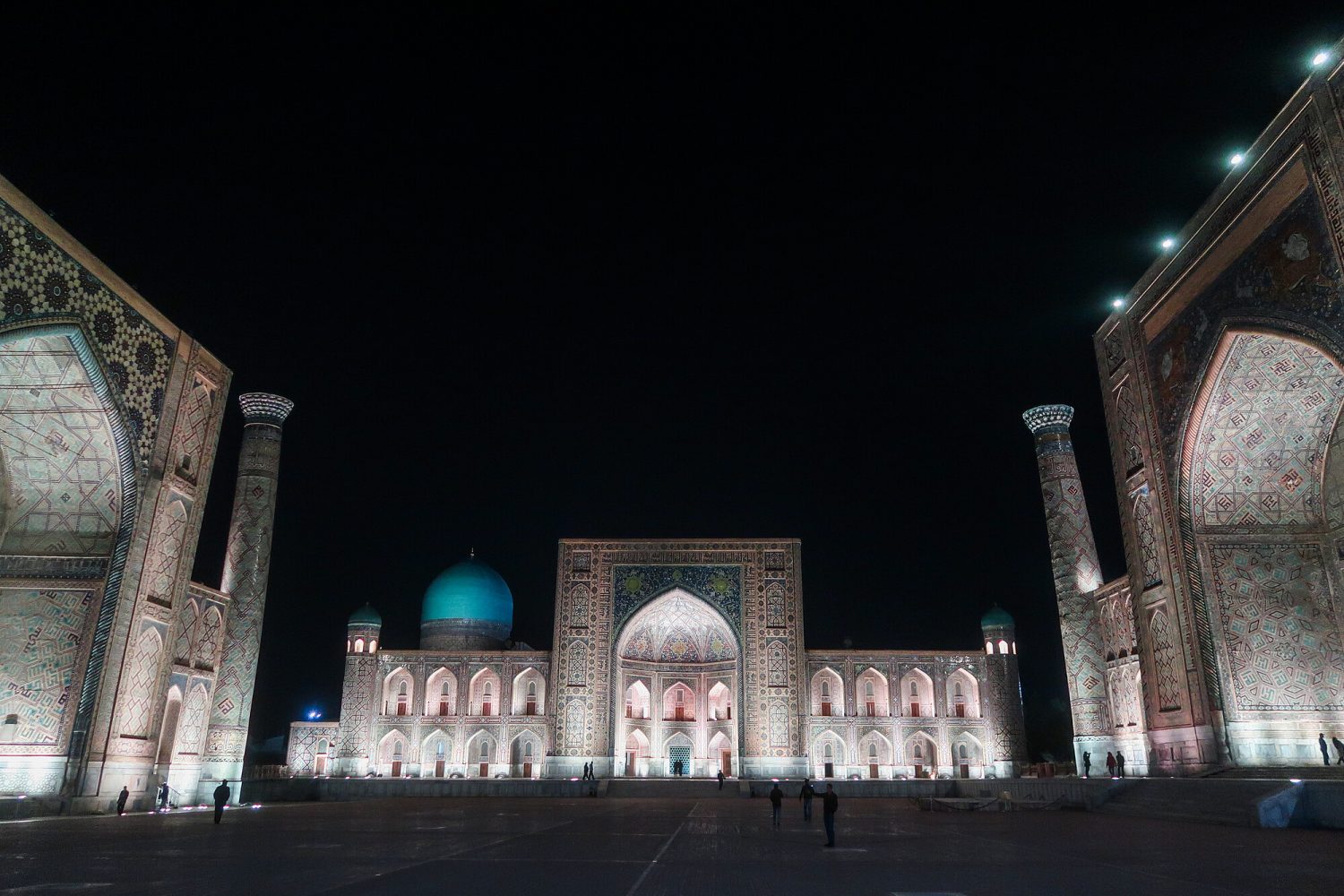 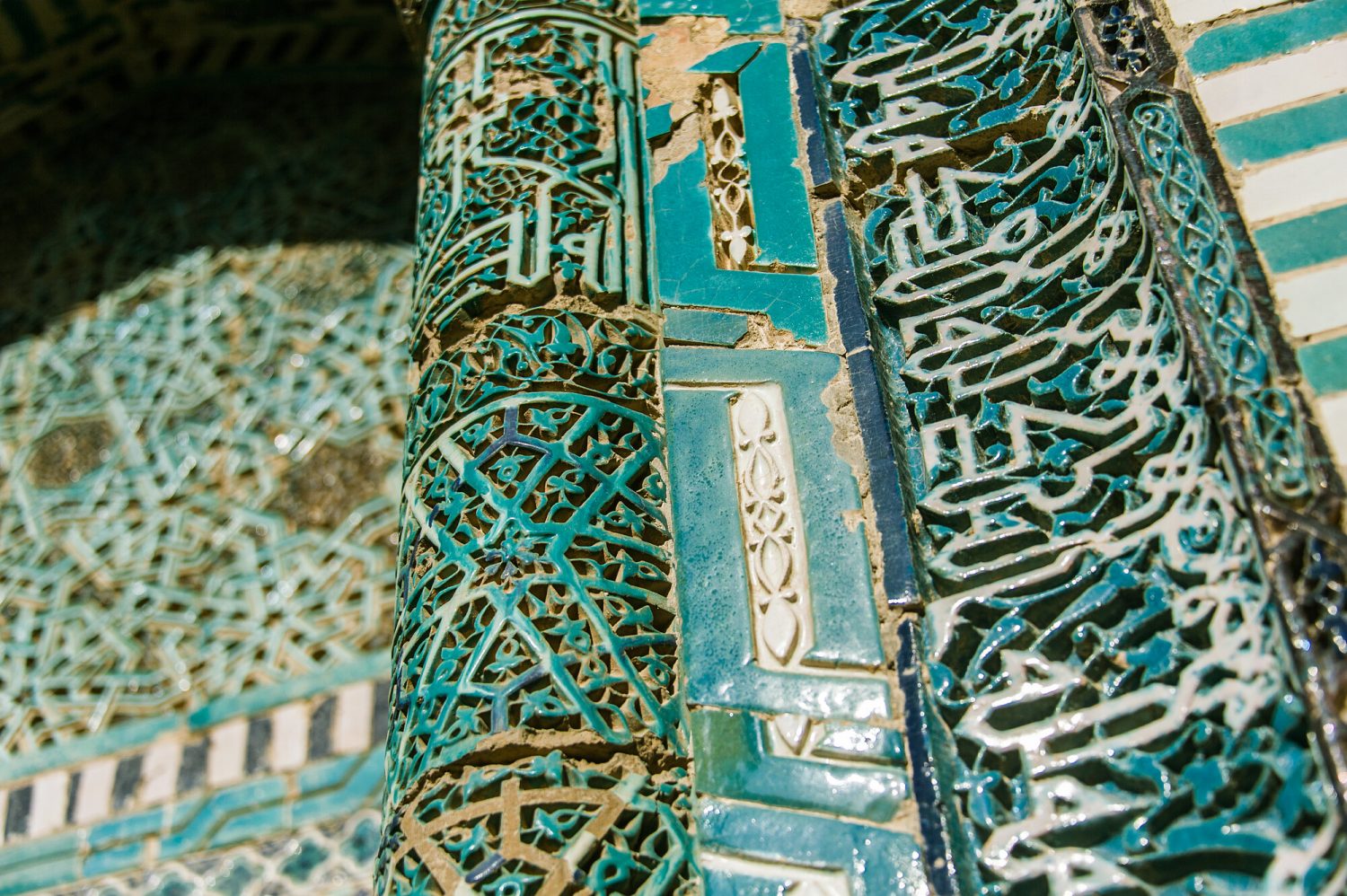 Many of these treasures date from the 16th-19th centuries as many of the older structures were raided by the famous conqueror Genghis Khan. To see some of the older remains that still exist, head for lesser-known parts of southern Uzbekistan. The region of Termez, bordering Afghanistan, has an amalgam of structures going back to the pre-Islam era and includes ruins of Buddhist temples and a town founded by Alexander the Great. 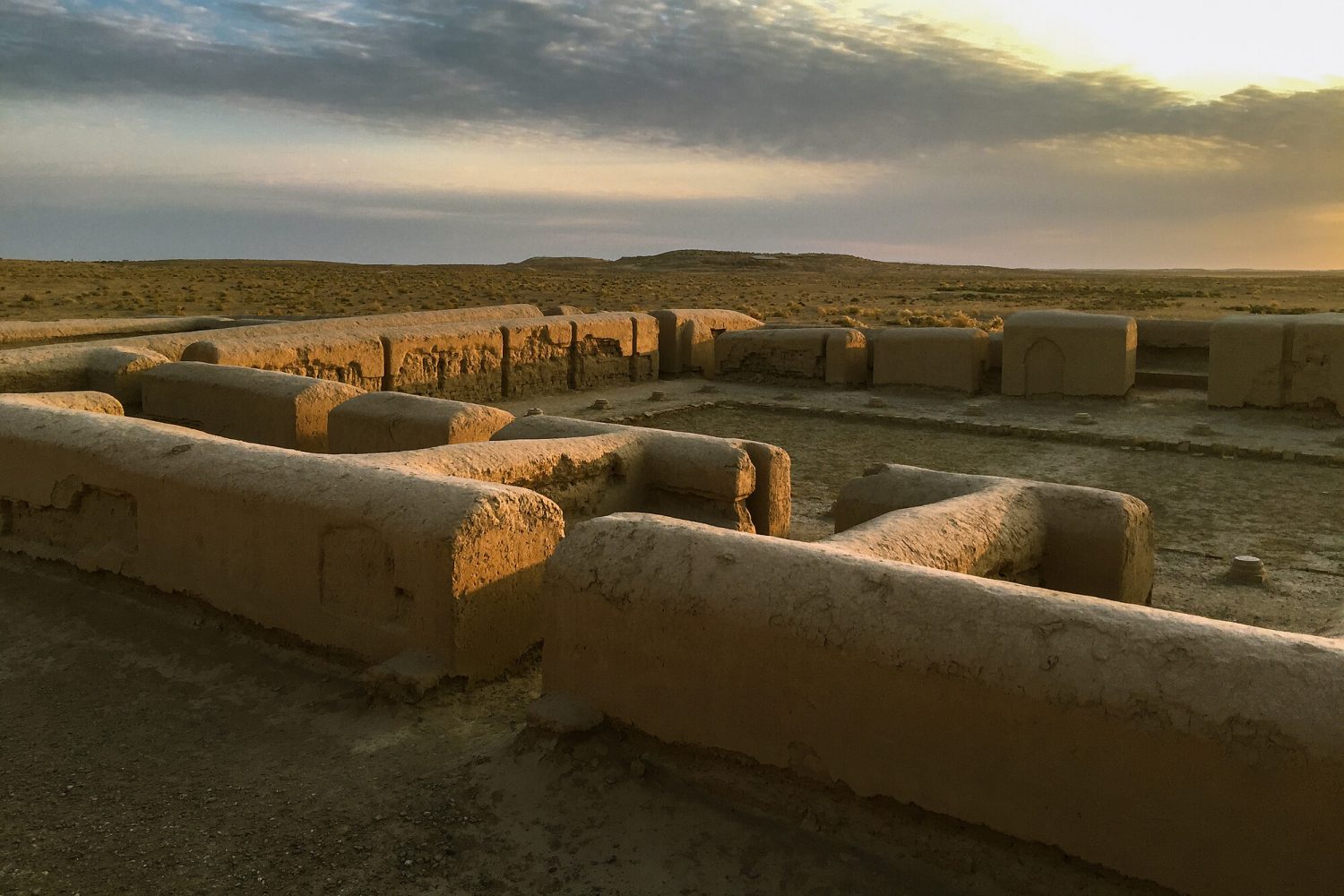 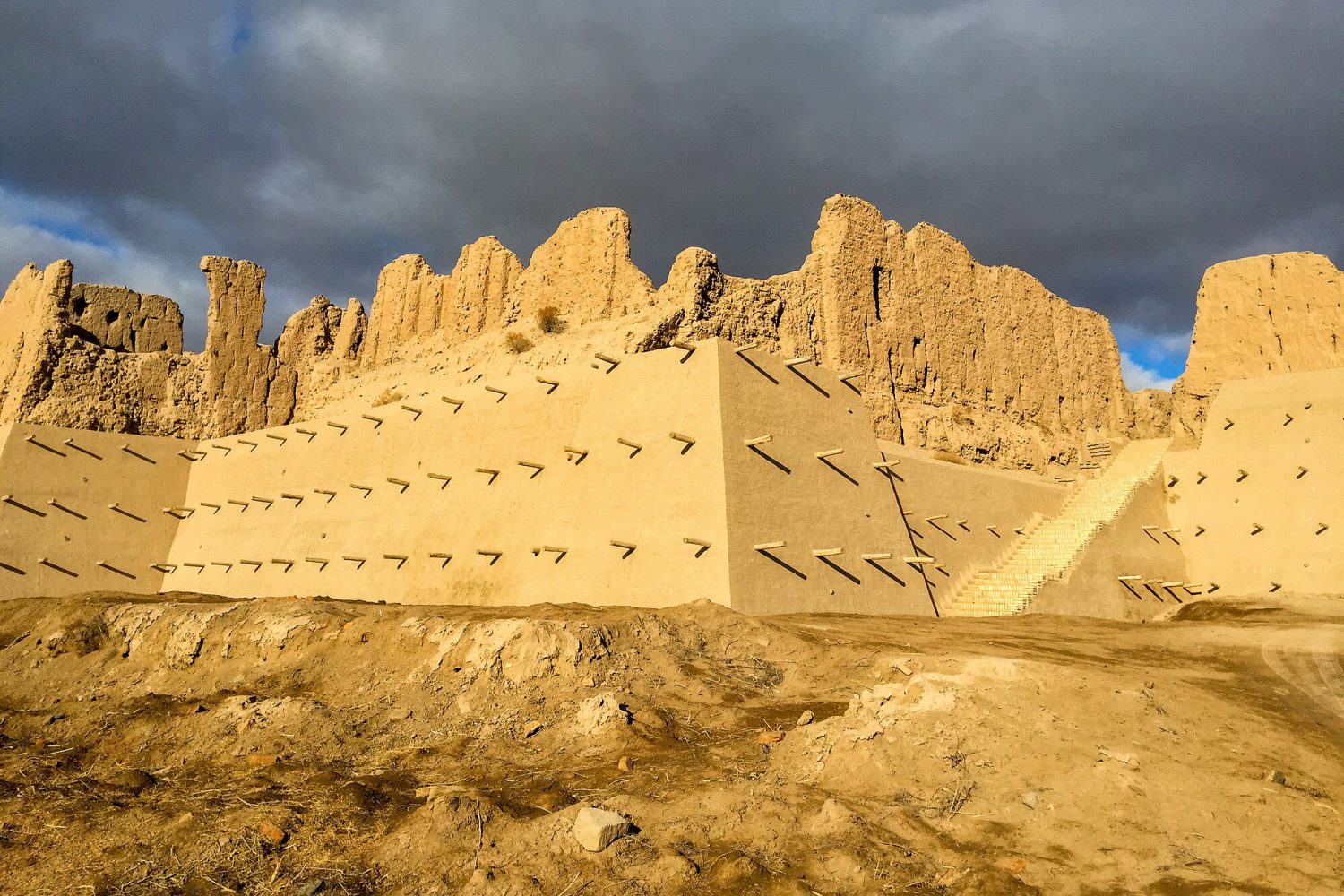 Remote camping, enjoying clear and starry skies in a peaceful silence, and regularly sitting around a campfire are important parts of our overland travels. With plenty of open spaces, overland camping opportunities abound in Central Asia. We have felt safe wherever we traveled and camped. Get off the main road, take a side road, or otherwise just follow a dirt track into the steppe or desert and set up camp out of sight. This can be at the foot of a mountain, along a sparkling lake or river, or right next to ancient ruins that are scattered across the countryside. 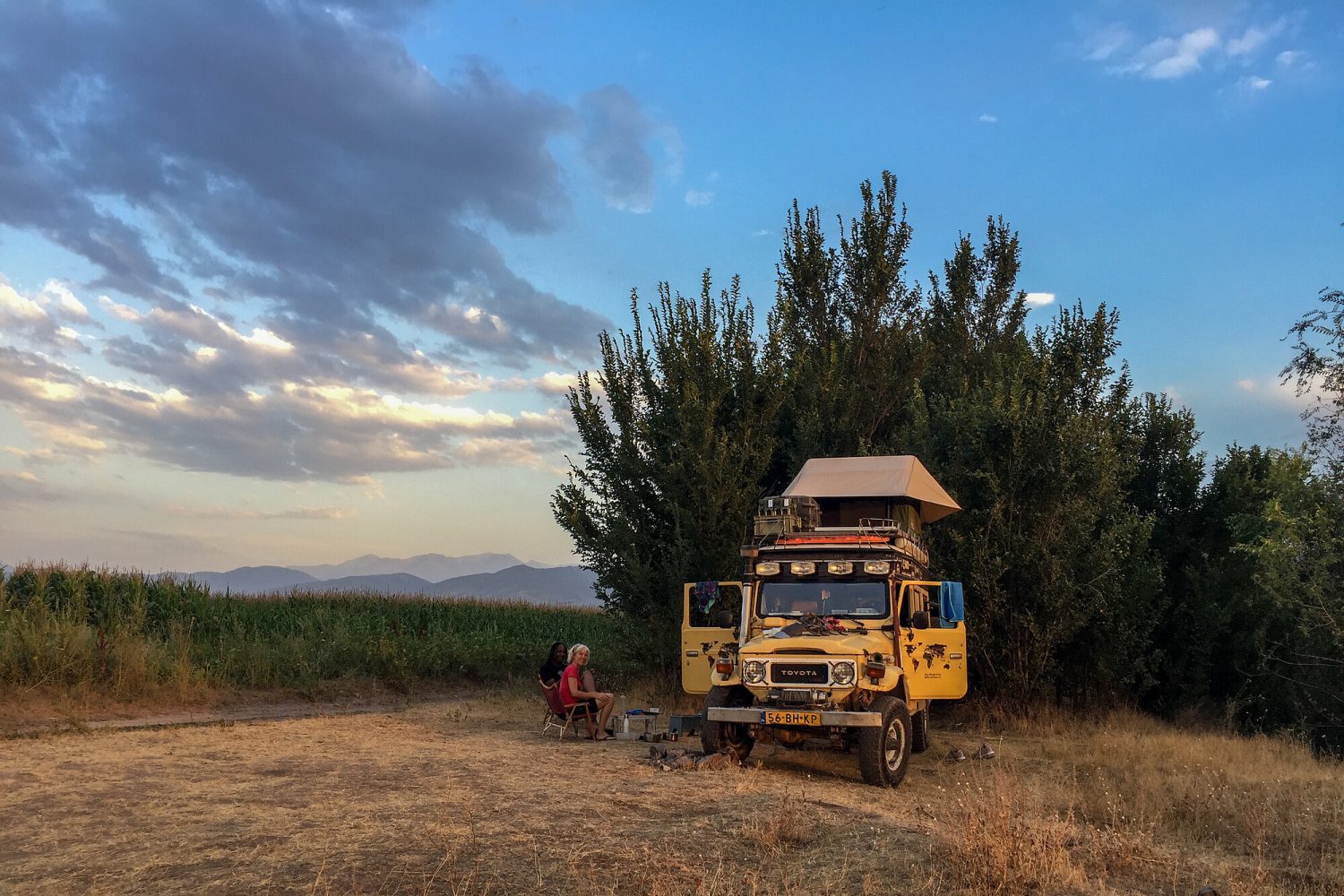 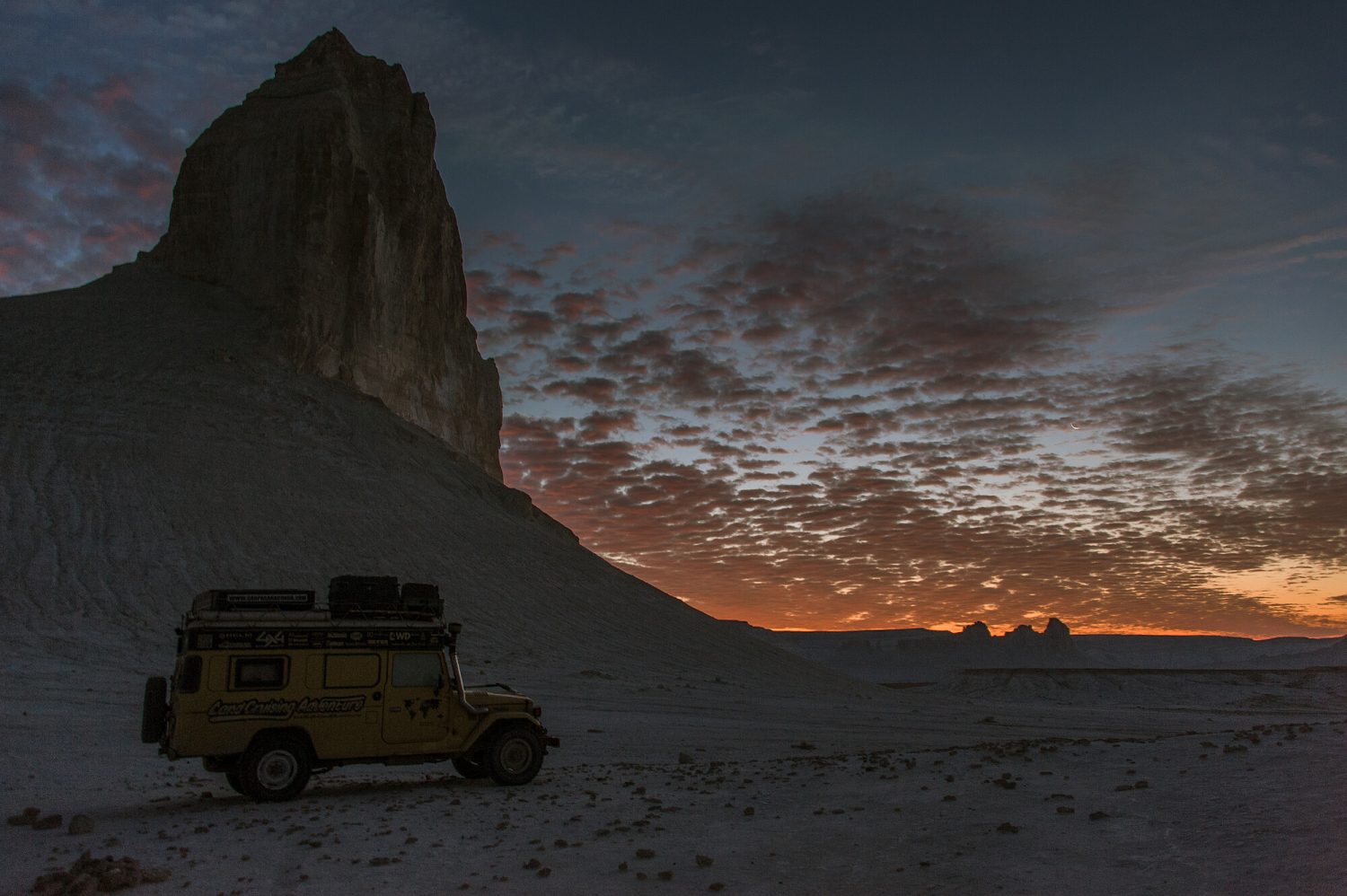 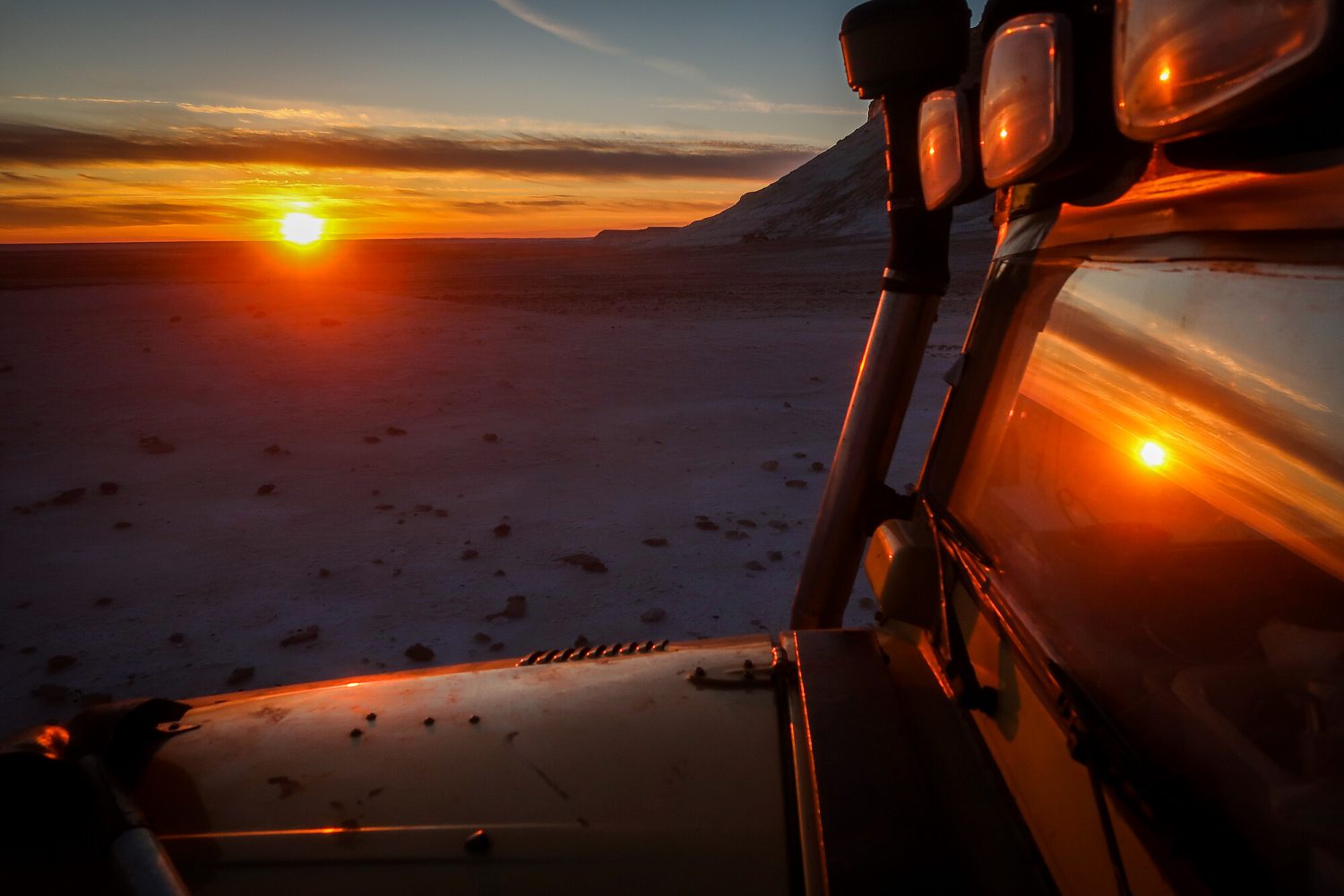 By the way, when you have to traverse long distances, you can park in parking lots of restaurants or hotels along the side of the road. Do ask for permission and know that some of these places charge a small fee. They aren’t beautiful at all, but simply convenient.

Unsure where to camp? Check the iOverlander app and don’t forget to contribute your favorite camping spots.

Driving the Silk Road—what is there not to like about that idea? Throughout the centuries, traders, conquerors, and adventurers have followed the tracks of the Silk Road whose origin can be traced back to the 2nd century BCE. There isn’t one particular route to take as the Silk Road changed over time, depending on seasons and safety, so you can fill it in the way you like and still follow (parts) of this famous route. 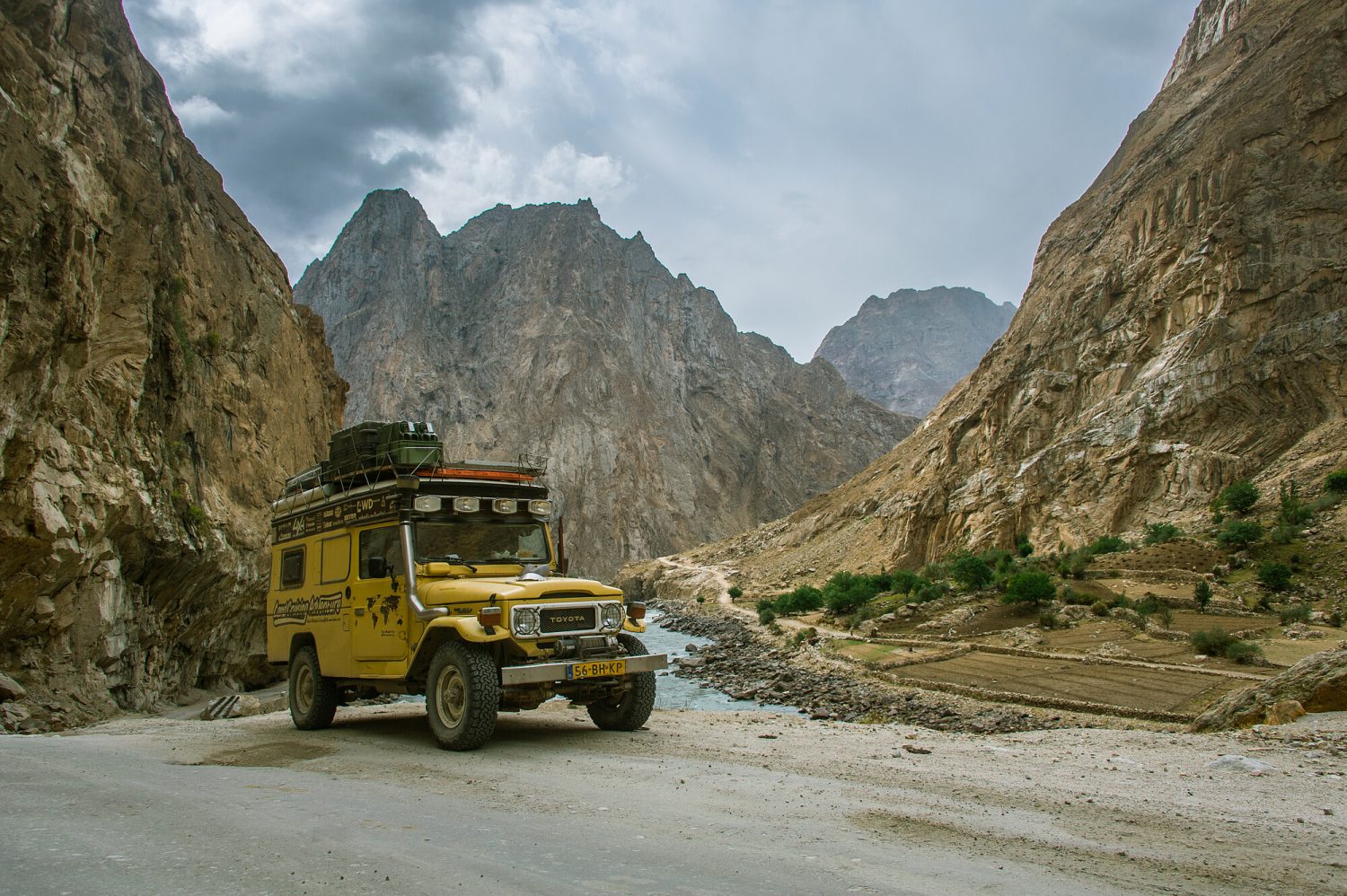 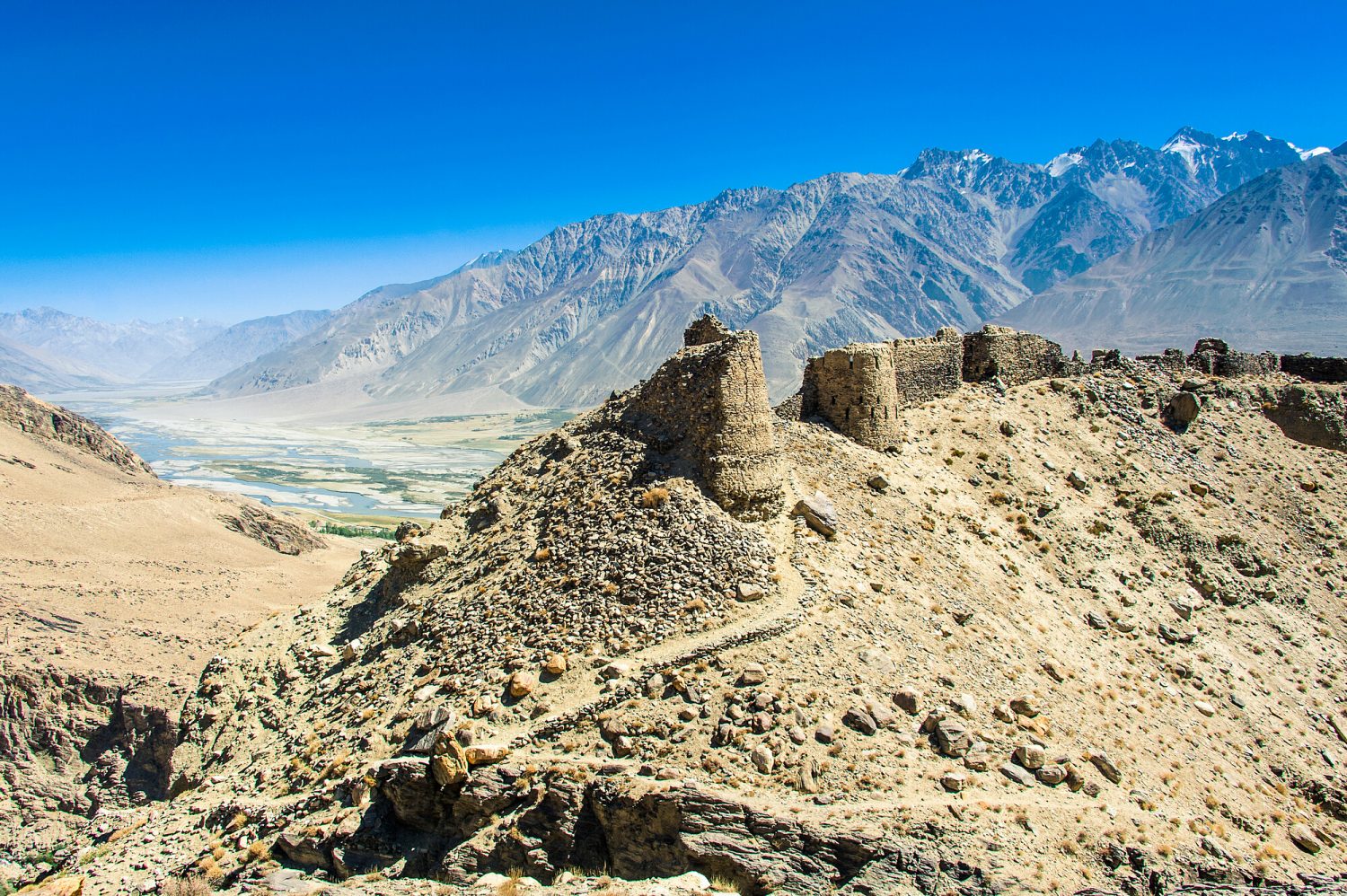 Spectacular beyond imagination, reaching over 13,000 feet in elevation and passing right along the border with Afghanistan, this truly is overlanding pur sang.

As said before, you can’t just ship your vehicle to Central Asia. You will have to drive from somewhere to somewhere, which is quite feasible. Coming from Europe, you can either drive the northern route via Russia, or the southern route via Turkey. From Turkey, you either drive via Iran (note: UK, US, Canada passport holders need a guide in Iran) or via the Caucasus, crossing the Caspian Sea into Kazakhstan.

On the east side of Central Asia, some overlanders cross into China (only possible on an organized trip, learn more here), into Pakistan and on to India, or exit the Stan countries via Russia to drive to Vladivostok (don’t skip Mongolia en route!) and on to the Far East and Australia.

All are great options, but they do require one thing: time. If you don’t have that, consider renting or buying a car locally and focus on the Stan countries instead. We know of two well-known and popular rental places in Bishkek (Kyrgyzstan) that offer equipped overland vehicles from the luxurious, new Land Cruisers at Iron Horse Nomads to an old-style UAZ buhanka campervan at Buhanka for Rent. For motorcycle rent, Muztoo in Osh (Kyrgyzstan) is a well-known place to go.

No matter how long or where you go, or with what vehicle, Central Asia is bound to bring you a fantastic overland adventure. Have fun and see you on the road!

Add the Pamir Highway to your trip