A new continent and an altogether new type of overland vehicle were placed on my plate early one morning in February. I was in Dubai, my first time touring any part of Asia, with a Toyota Land Cruiser six-wheel drive loaded with camping kit in the driveway, ready to go. This delightful prospect had kept me awake for three months as the trip was proposed, organized and now imminent.

Shaun and Andronette Mayer, South African expats living in Dubai, approached me with the idea of driving across Oman. That idea alone was enough to get my wanderlust boiling over. It turned out that, for over a decade, the two of them had made overland touring in that part of the world a specialty. They had also been part of an editorial team that has produced a number of guidebooks for the area. So, my hosts were well qualified to show me how to take full advantage of Oman. 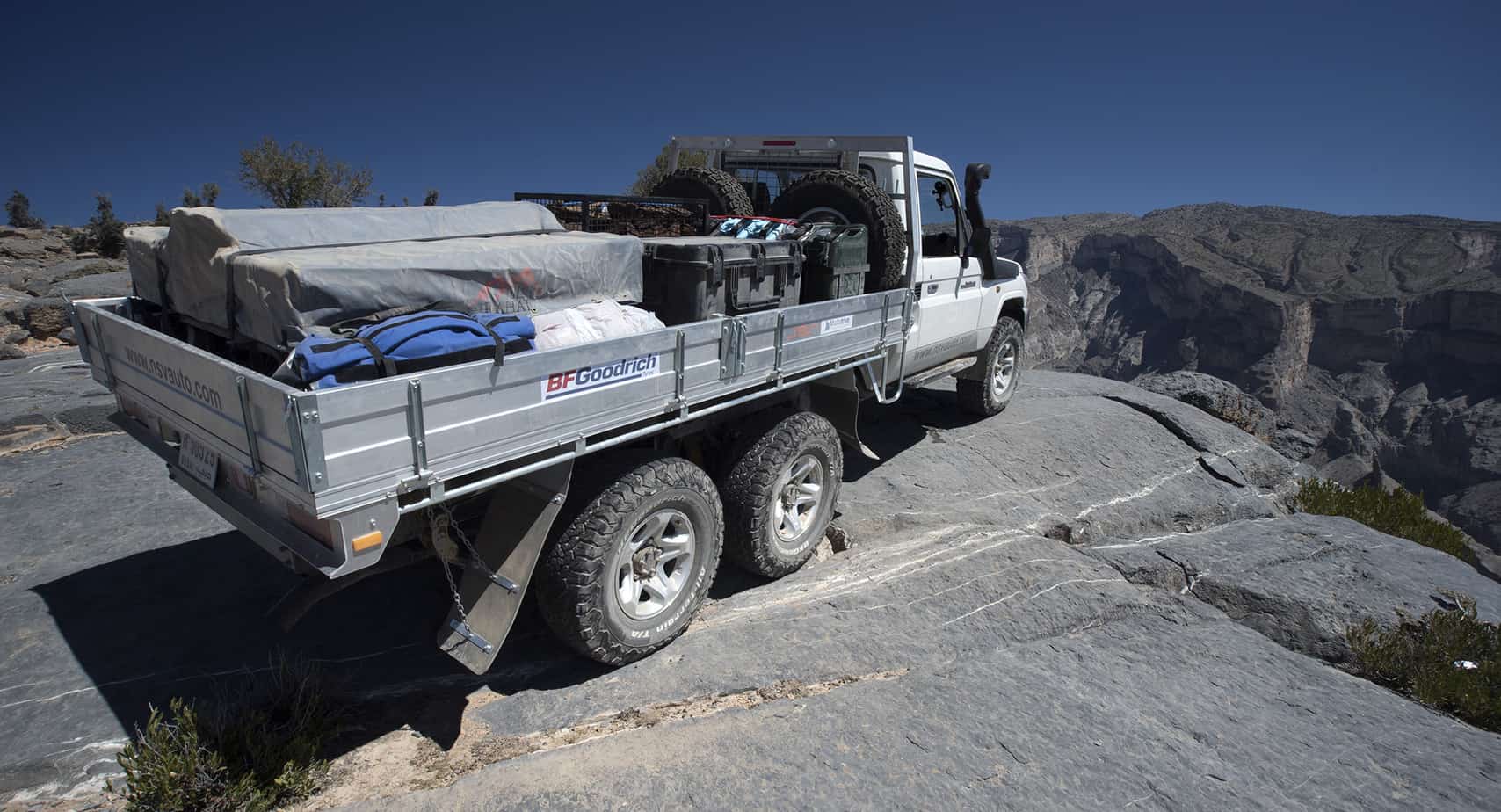 The brief to me was: “Get yourself here with a toothbrush and driving license. We will do the rest.” This made me a bit nervous. Many years ago under similar guidance, I found myself alone next to a river with a vehicle, but no fuel, a Swiss-Army knife my only tool, and a night spent on the open dirt with no sleeping comforts of any kind. Not even a blanket. But that’s for another campfire. In contrast, Shaun and Andronete pulled out all the stops and showed Gwynn (my wife) and me an absolutely wonderful time in the desert.

But topping everything was the truck. I like Land Cruisers quite a lot. But this one was beyond expectations. At first, I was told my vehicle would be a Jeep Wrangler, and that was good for me. Any time in a Jeep is good. Then there was a change in plan, and I was told, “A Dubai company specializing in vehicle accessories and truck builds is loaning you one of their creations.”

This also added to my sleepless nights. Arabs like their 4x4s—a lot. In fact, a bit too much to be healthy really. Some of their outlandish creations are absurd. Me being a bit conservative in my vehicle tastes, I really didn’t want something I wouldn’t appreciate. What I was eventually given curled my toes. A Toyota Land Cruiser 79-series pickup, fitted with the highly evolved Australian Multidrive 6×6 conversion. With a payload in excess of three tons, (not that I needed it) articulated rear axles, auto diff locks and twin fuel tanks, this was going to be amazing. As I first clapped eyes on it, it dawned on me that this vehicle could be an even better overland vehicle platform than my beloved Cruiser Troopie. But, how would it drive? That would be the deciding factor. 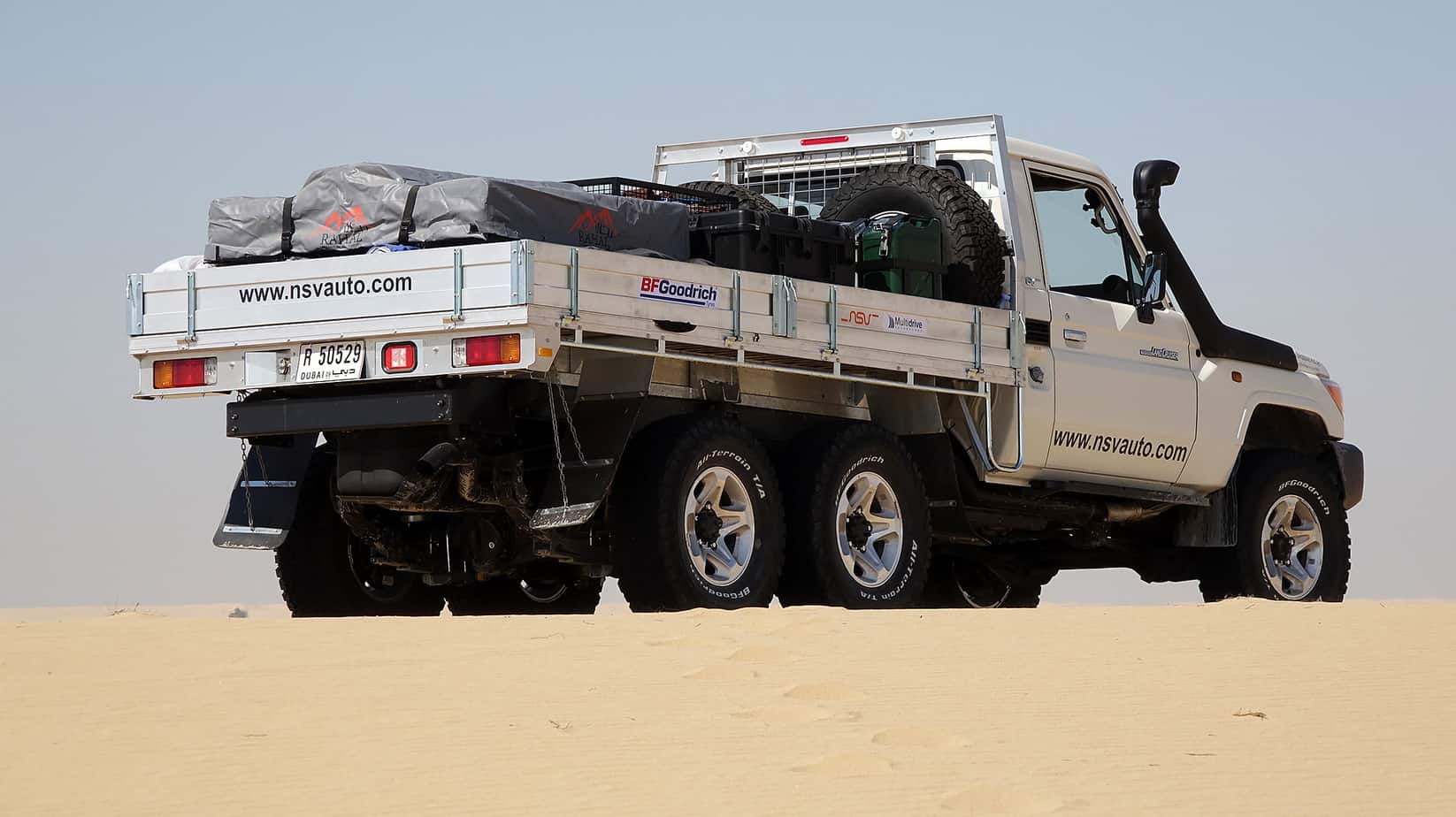 The route took us through a section of dunes inside the Al Marmoum Conservation Reserve in the UAE. Shaun wanted to show us Arabian Gazelle, Oryx and camels. But I was less interested in the wildlife because I wanted to find out how a 6×6 played in deep sand. With this in mind, I decided to first drive at normal tire pressures, while Shaun dropped his heavily loaded Land Cruiser-76 pressures down to about 1-bar (±14,5 PSI). Astonishingly, I kept up with him, although not with ease. As the day became hotter, I too had to accede: while the 6×6’s capabilities in sand were good, it was no magic carpet. Even with six of them, they will dig in when the sand gets soft enough.

But the big surprise was the truck’s agility. I expected it to feel heavy, cumbersome and a bit of a handful. Not a bit of it. It felt a bit heavier than my Troopie, but not to the point where is became difficult to control. It displayed a similar amount of over-steer and under-steer to what I was familiar with. By the end of the day, I was delighted with my truck. The roads heading south through Oman towards the high plateau were a good test for its on-tar feel. And this is where I was amazed. It tracked as well as a stock Land Cruiser 79 with a high quality suspension upgrade. But its ride was even better. The tendency for a lightly loaded stock Cruiser-79 to kick a bit at the back had gone.

High in the Al Hajar mountains, I was introduced to the best overland mountain pass I have even driven. Ninety minutes spent climbing over 6000 feet of elevation, with switchback after switchback, all surrounded by towering cliffs. The 6×6 handled this challenge as easily as any 4×4 pickup. The brakes were excellent, better that my stock Troopy by a large margin (stock Troopy brakes with rear drums are lousy!)

Over the top and, to my absolute delight, the tortuous decent was loose gravel. Heaven! And this vehicle was easy to drive. With no overt under-steer, as I expected, a bit of over-steer can be induced— exactly what I am used to. Another two hours of straining against the seatbelts and I think I permanently creased my face with a smile all the way down that pass. I loved every inch of it.

The routes through Oman were brilliant. The truck marvelous. The scenic shots unsurpassed. The quality of the campsites terrible. Sadly. While the rubbish, litter and general mess around many of the campsites dented our impression of Oman, it did not spoil our enjoyment of the country to any significant degree. Surely litter and mess is an easy problem to solve. Trash cans, education and a bit of political will is all it takes.

My verdict on the Multidrive 6×6 Land Cruiser is: In a dual-cab configuration with a quality camper canopy installed, it would be a truly amazing long distance overland truck. It has everything going for it. This one had the 1HZ, 4,2 normally-aspirated straight-six diesel engine, the one loved by undeveloped countries because of its lack of any electronics. Even with the after-market turbo fitted, it’s still a bit underpowered. In Asia these Cruisers can also be delivered in 4-door dual cab form with the 4.0 V6 petrol, and in Australia with the 4,5 V8 diesel. Fuel consumption on this trip equaled that of Shaun’s laden Cruiser-76 station-wagon, averaging about 15 liters per 100 kilometers (±18mpg)

But the very best part of this rig is its ride on rutted tracks and washboards. The rear axle system means that when axle-2 rides up, it pushes axle-3 down. And when axle-3 is pushed up, it pushes axle-2 down. Driving over speed humps displays how this works. As the front wheels ride over the bump, the vehicle hops as normal, but the effect on the rear is odd to say the least. Almost nothing happens. Because of this suspension, the rear lift over the bump is divided by two. In the cab, the rear wheels lifting over an obstacle can hardly be felt. Off road, it feels strange and took a bit of getting used to. Once I got the measure of it, I was so impressed. The ride on tracks is amazing. “Quite horrid corrugations,” Shaun said once. I looked at him with a blank stare. I honestly hadn’t even noticed them. Truly. But I leave this one for when I’ve experimented some more with this setup on corrugations. I find it all a bit to good to be true for now.

So, as I contemplate my next major vehicle build, (in Australia) I have to consider if this truck is the next step up the overland ladder. Could the Cruiser 6×6 be turned into the perfect overland truck? We’ll see want the future brings. As far as Oman is concerned, it could easily become a favorite. We loved every minute of it. 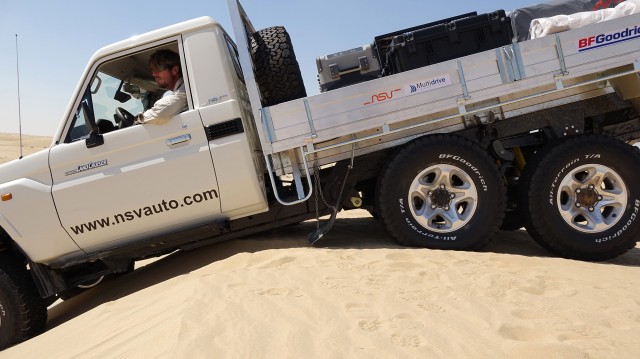 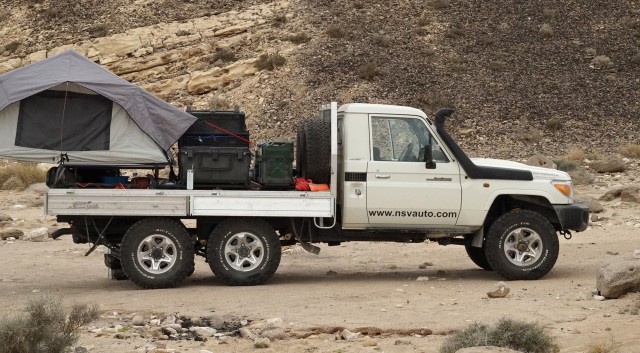 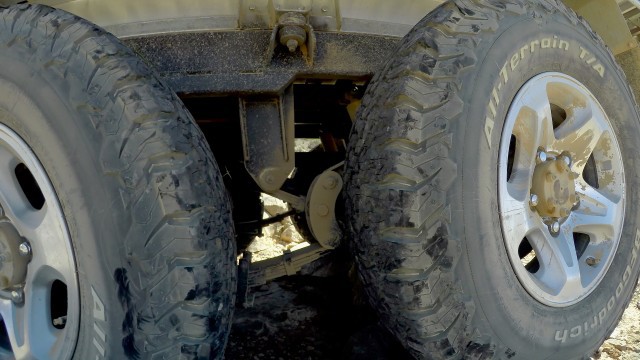 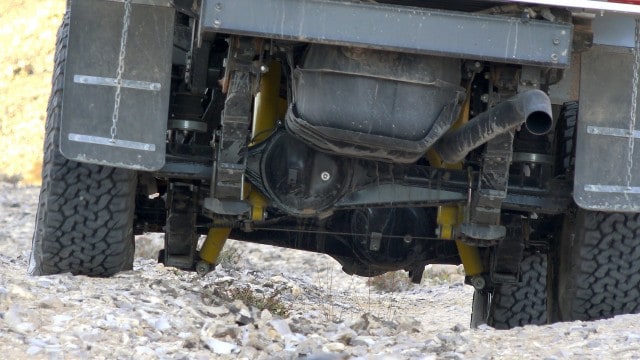 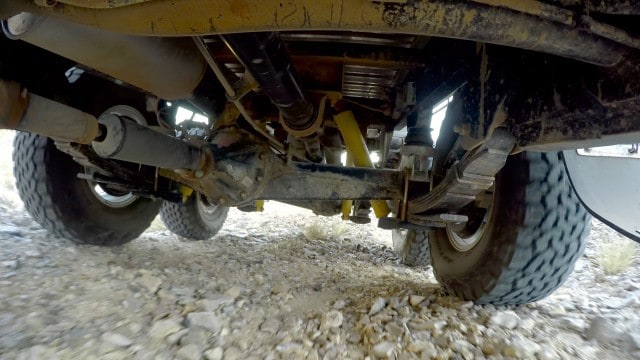