Like any good off-roading foray, it all started with a plan. We were going to be a crew of four vehicles, but with only a few days to go before the trip, they all dropped out one by one. I was ready to escape for another adventure, but by this point discouragement began to set in. I could go solo, but this could present great risk or great reward.

After residing to go as a lone vehicle, I enlisted my father as navigator, and the adventure was on. Our target destination was Kakwa Falls in Alberta, Canada. It would be 1,800 kilometers (1,100 miles) in 48 hours. While the trip was an ambitious one, that is what made it on worth doing. The gear was packed, equipment put together, and concession plans assembled.

We left on a Friday morning, and unfortunately the forecasted weather was to be wet with a chance of really wet. Though this had a bit of a dampening effect on our mood and equipment, we persevered. We spent the first several hours reminiscing about past trips we had done together; hunting, fishing, or really just overlanding. It is one of my favorite parts of every trip—the opportunity for intentional conversation, sharing of perspectives, and the prospect of talking about things that matter.

It seemed that only moments into this adventure, we had arrived at our first destination, the mecca of Grand Prairie, Alberta. We had tackled the highway portion, now we were ready for the route to get exciting. 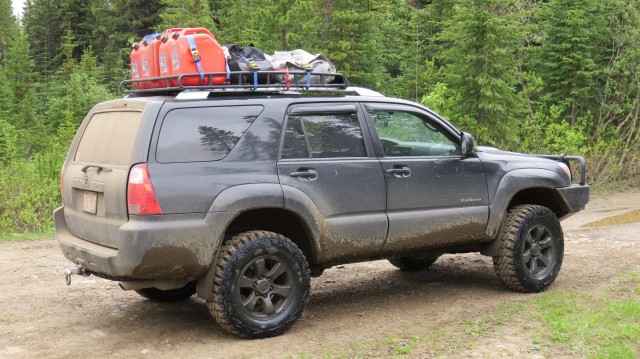 It was a mere one-hundred and sixty-eight kilometer journey from Grande Prairie to the overnight spot, and on a dry day, it was just a dusty drive down an old relatively well maintained logging road. Once we arrived at our destination of Two Lakes, we sought the best spot for our tent for the night. Our grass site, surrounded by northern Alberta’s low bushes and giant pines, pleasantly surprised us. Once camp was set up, I asked my dad if he was interested in driving up to the first river crossing. There were rumors that it was impassable only a few weeks prior. The first crossing was only ten kilometers up the trail, so we decided to see if our trek would be do-able

After an hour and a half, we still had not yet reached our first river crossing. We had however, mastered several creek crossings including Stinky Creek, rightly named for its hydrogen sulphide induced rotten egg smell. After leaving Stinky Creek behind, we finally arrived at our first river crossing. I shifted my 4Runner into low, inspected the route, and checked the depth by easing out into the current. We began our assault on the river slowly and methodically while working our way amongst the boulders. We avoided the largest ones and threaded the 4Runner though to the other side. Having accomplished this, I had to ask the question: “If we’ve come this far, shall we just go all the way to Kakwa Falls?”

Originally the plan was to drive to Two Lakes, enjoy a relaxing evening, head to the falls in the morning, spend another night at Two Lakes, and then finally head home the following day. However, with all the rain we encountered, my dad and I felt a sense of urgency. We figured it would be best to manage the trip in one evening, head out in the morning, and hopefully avoid any flooding events. We figured that our destination couldn’t be too much further; according to the maps, we were a mere fifteen kilometers away. However, for those well versed in the art of overlanding, fifteen kilometers quickly turns into another hour on the trail. 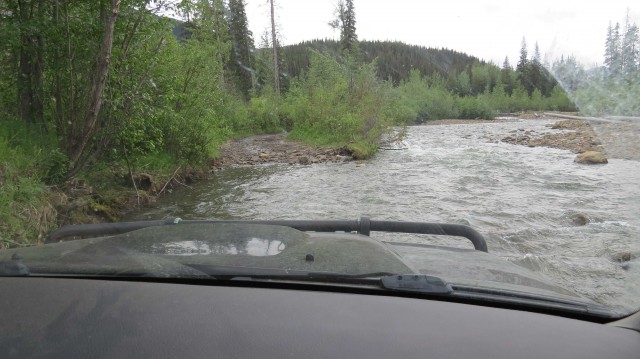 We crossed the same river several more times and other tributaries and creeks. Finally, we arrived at our intended destination: Kakwa Falls. The river was a torrent of clear glacial fed water flowing at an alarming rate and depth. Both Dad and I were relieved that this was one river we did not have to cross. Instead we hiked the short kilometer and a half downstream to the falls. They were truly impressive, cascadgin nearly thirty-two meters (over one hundred feet) to the valley floor. They are a sight to behold, and are unofficially crowned the largest falls in the province. During the hike, I couldn’t help but comment that this four by four track could get interesting in the rain. We noticed the first drops of rain on our way back to the 4Runner.

The forty kilometer drive back to Two Lakes went without a hitch. We were thankful that we made the decision to drive to the falls that night rather than wait for morning. The rain may have had quite the impact otherwise. The only damage to the 4Runner after a long day of driving was the loose roof rack; there was some minor damage to one of the rack covers. Exhausted from the past fourteen hours, we heated up some leftover chili, crawled into our sleeping bags and fell asleep to the sound of rain on the outside of the tent. After eight hours of sleep, a significant amount of rain had fallen. Dad and I were even more pleased that we had made the trek to Kakwa Falls the previous night. We packed up slowly, paused to make breakfast, and huddled under the tent fly while we ate. Once nourished, we quickly reorganized the back of the 4Runner, packed everything up, and headed back out the way we drove in. 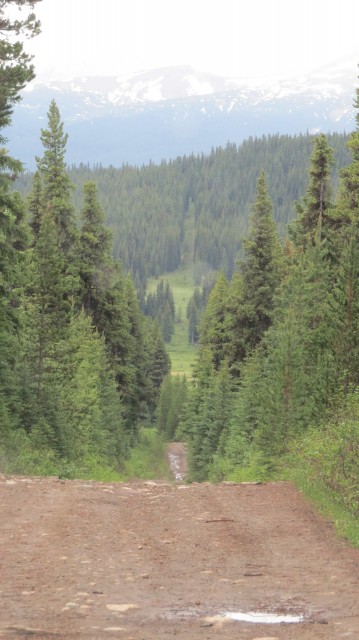 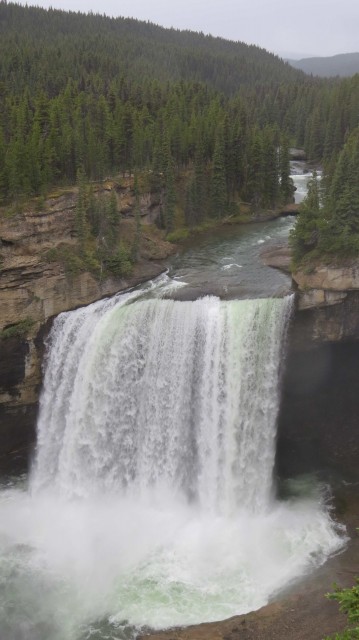 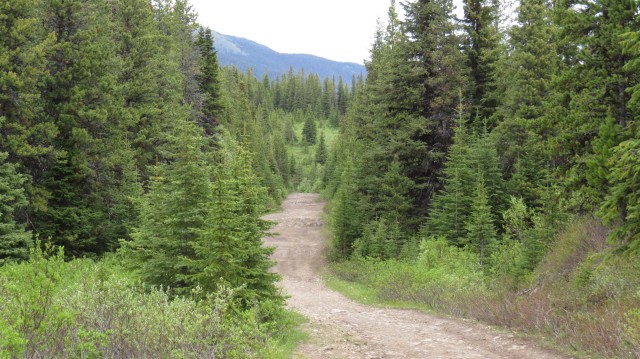 Having rained all night, the road back to the pavement soon went from a bit sloppy to downright challenging. I haven’t had the pleasure of driving such a difficult stretch of road in some time. The tires on the 4Runner sank six inches into the mud and sometimes dropping into holes two and three times that deep. While the road conditions weren’t impassable, we struggled to keep the 4Runner on the road due to the ruts created by trucks ahead of us. While the hundred and sixty-eight kilometer drive took merely two hours on the way in, we spent nearly three hours battling the ruts, mud holes and streams to get back out. The road repeatedly tried to tempt our 4Runner into the ditch. We burned through nearly a half a tank of gas; the RPM’s were often sitting at three thousand just to keep the vehicle’s momentum up. We saw evidence where others had nearly met their fate by barely missing the ditch. Surely there would be serious damage or at least several hours waiting for help to arrive if indeed the 4runner succumbed to the appeal of the ditch. But the 4Runner overcame the hills, the ruts, and puddles. It sloshed through the mud pits and scampered around the corners made slick by the bottomless mud.

We arrived on asphalt with bittersweet feelings. Though the mud was exciting, one hundred and sixty-eight kilometers of it was enough for one day. We made our way back to our point of origin confident that we would have yet another great memory to reminisce about on future adventures. 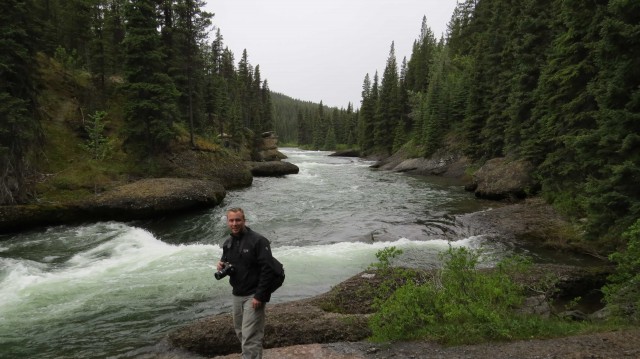 Tuffy Adds a New Solution for the Ford F-150 Supercab 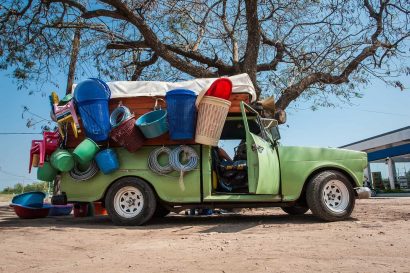 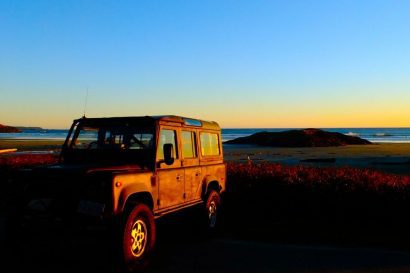 A Family of Storm Seekers 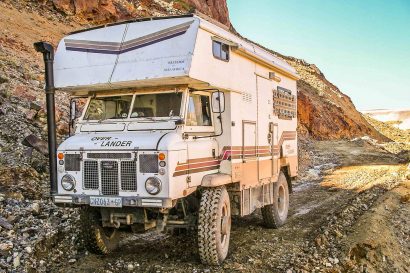