Herman and Candelaria Zapp grew up together, dreaming of adventure since they were kids. Six years after marrying, they set a firm date for the backpacking trip they’d put off for so long. But at the last minute, they decided to drive instead. The vehicle was sitting in their garage and in need of refurbishment. In two months, they drove away from their home in Argentina in a 1928 Graham-Paige car, headed for Alaska. They made it 35 miles the first day before pulling into a blacksmith shop to fix one of their wooden wheels. The seasoned woodworker encouraged them, “Only you—and no one but you—know what you’re capable of doing. Those that do the least are the ones that criticize the most. So if you are criticized, it’s because you’re doing something.”

That conversation took place 22 years ago. Herman and Candelaria didn’t stop in Alaska. Instead, they drove 225,000 miles, bringing four children into the world in four different countries. They completed their global journey in early 2022, returning to their home country of Argentina. 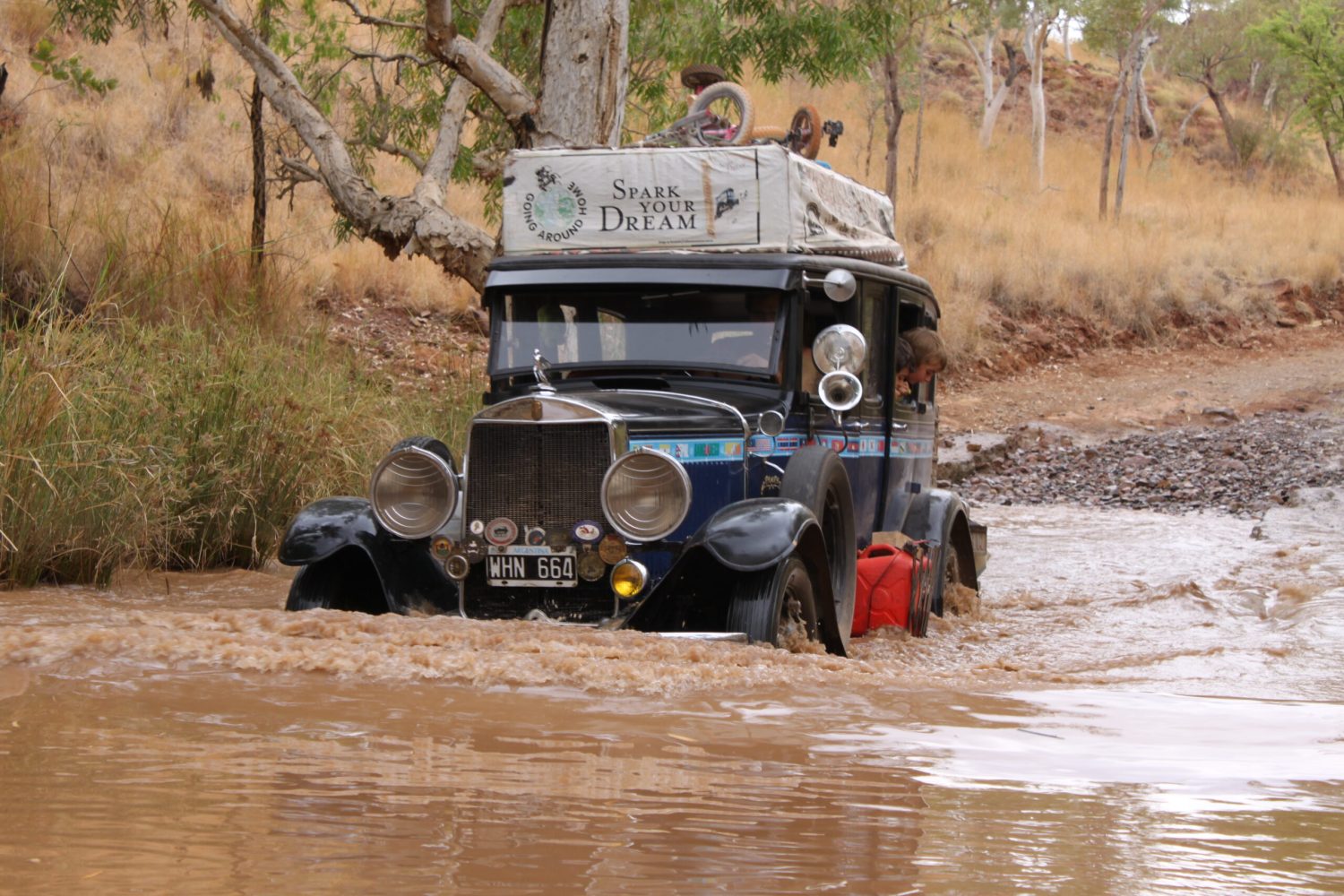 “What if we drive?” Herman asked Candelaria as they drifted off to sleep, mere weeks before the firm date they’d set for their long-awaited backpacking journey to Alaska. Hoping his wife would agree, Herman promised mechanical work, aesthetic modifications, and a 400-mile test run. In theory, the car would tell them whether it was up for the trip, simplifying the decision of whether to utilize it or not.

Those final two months sped by, filled with the jumble of details every long-term overlander faces before departure. Two days before leaving home, the Zapps took the Detroit-born Graham on the agreed-upon test drive. Though the trial took place over a much shorter distance than they’d envisioned, the couple was relieved when the car performed flawlessly to their downtown area and back.

However, loosened wheel spokes signaled their need for attention before Herman and Candelaria could drive out of their neighborhood, and a bearing failed on day three. The carburetor needed to be thoroughly cleaned after they coasted backward down a hill in the Andes. Along the way, axles and differentials broke. The engine cracked at piston number five in Zimbabwe. When fuel ran out unexpectedly, the couple was shocked to calculate the car was getting five kilometers to the liter. But they never considered switching vehicles, and the Graham-Paige ultimately stayed with the family all 22 years on the road. “It’s the best car to travel,” Herman told me emphatically. 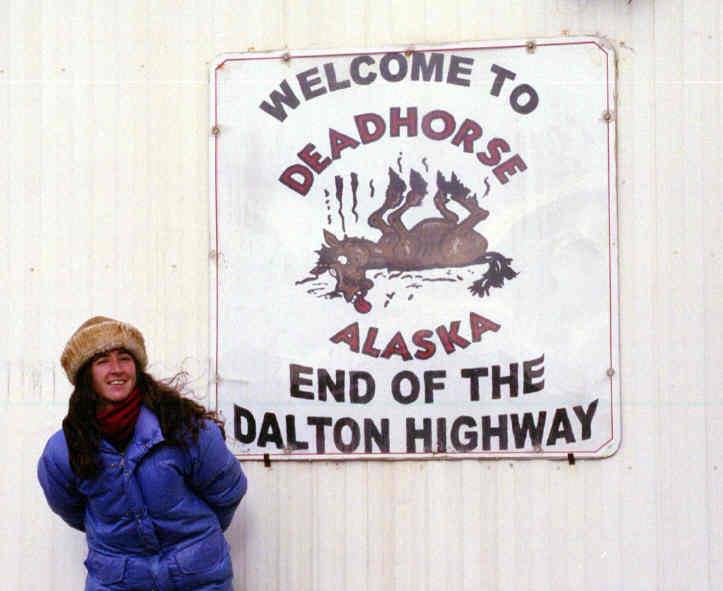 After their first two children were born, Herman and Candelaria decided to enlarge their moving home. They cut the vehicle in half and stretched it by 40 centimeters (16 inches) to add a row of seats, copying and adding side panels. The seats below transform into a bed for mom and dad. They also engineered a pop-up tent where all four children could sleep.

The car is named Macondo Cambalache, a combination of the town in 100 Years of Solitude by Gabriel García Márquez and an Argentinian tango song. The vehicle still has its original wooden wheels, wooden trunk, engine, and brash horn. As one would expect, the car lacks air conditioning, but the family utilizes the forward-opening windshield for airflow. 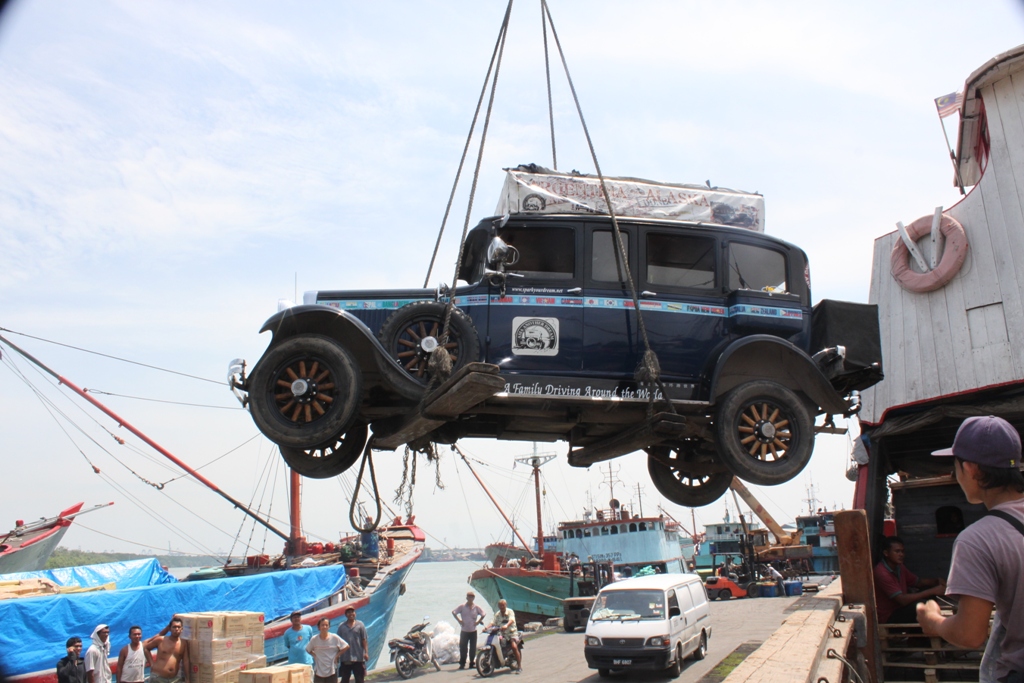 225,000 Unconventional Miles Around the World

Since he was a child, Herman had imagined going down the Amazon, but the wish seemed impossible to fulfill as the couple approached the crossroads that could divert them thousands of miles towards Brazil. They were nearly out of money. Then there was the question of what to do with the Graham-Paige during the marine journey.

As it often did throughout the Zapps’ two-decade adventure, a door opened in the form of an offer to ride a barge down the giant river. However, when the departure date stretched two months later than expected, with no promise of arriving, Herman and Candelaria opted for a risky Plan B: using an abandoned canoe.

“We find the canoe covered with weeds, full of water, and with a few holes,” Herman recounts in his first book. “We measure the width, and the car will just fit, with only 2 inches to spare. We need to find a motor, rudder, propeller, batteries, floor, roof, welders, mechanics, machinists, paint, oh, and don’t forget a crane to move the car!”

The townspeople volunteered their skills and time to help the travelers ready their canoe and the system that would allow the Graham-Paige to power a propeller. Ultimately, a man named Captain Aldaz authorized the journey—he was understandably dubious. “Listen to me, take my advice, forget about this idea. You have almost nothing in your favor,” he said. But the couple wouldn’t relinquish their goal. They completed their preparations and set off.

Quick thinking was required when the car’s fan belt broke on the river, rendering the canoe inert in the water (made more dangerous by the fact that Herman had forgotten to equip the canoe with an anchor). Herman cut the inner tube of the Graham’s spare tire into rings that could be used like an elastic band, producing a makeshift fan belt.

Though they set out in 2000 with only $4,000 in savings, the initial six-month journey to Alaska was just the beginning. Thirty miles from the Alaskan border, Candelaria started crying. They decided to spend one more night in Canada to contemplate their next steps. “The best part of a dream is to be part of it, not to complete it,” Herman explained. Herman and Candelaria ultimately visited 102 countries on five continents with a level of tenacity rarely encountered. 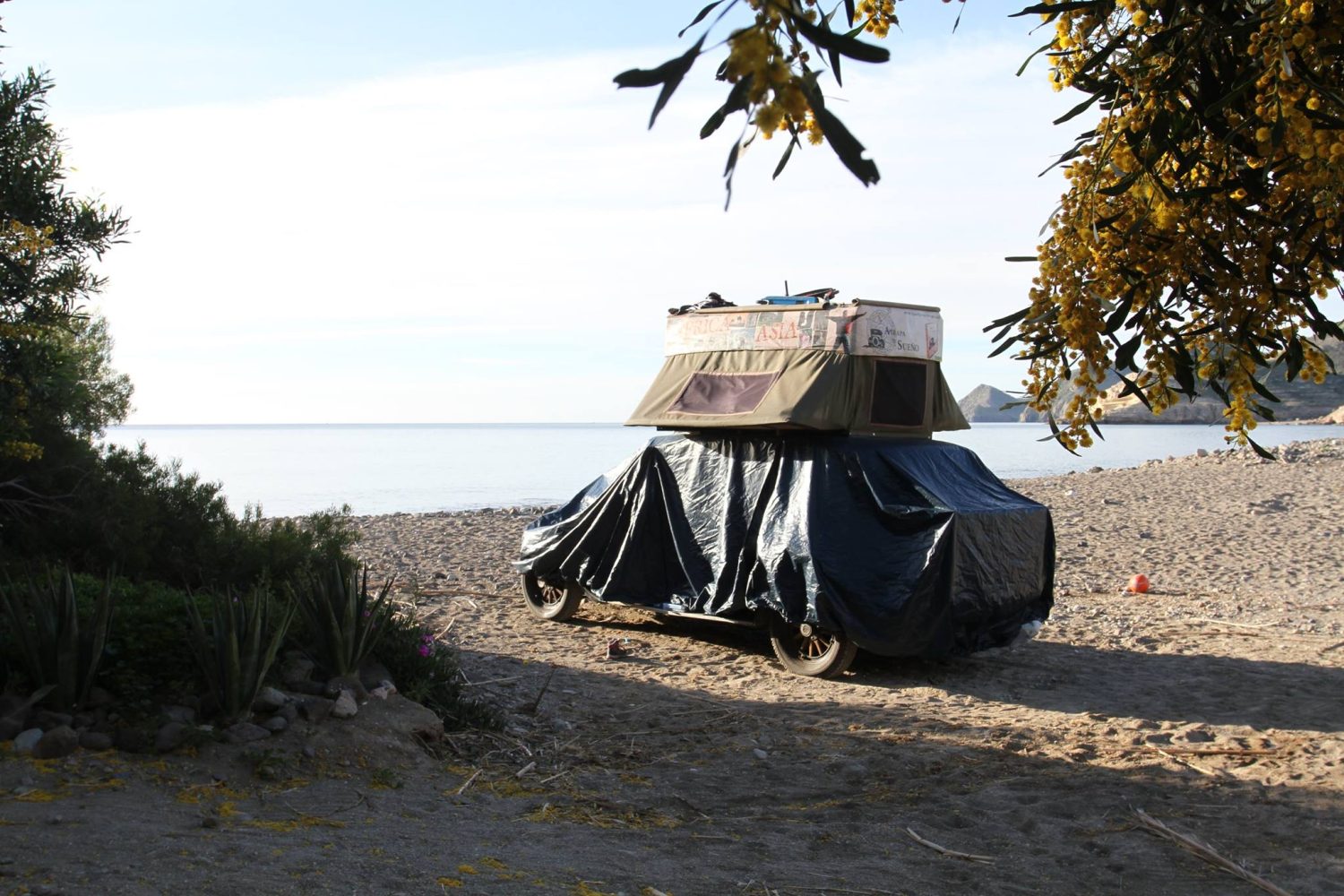 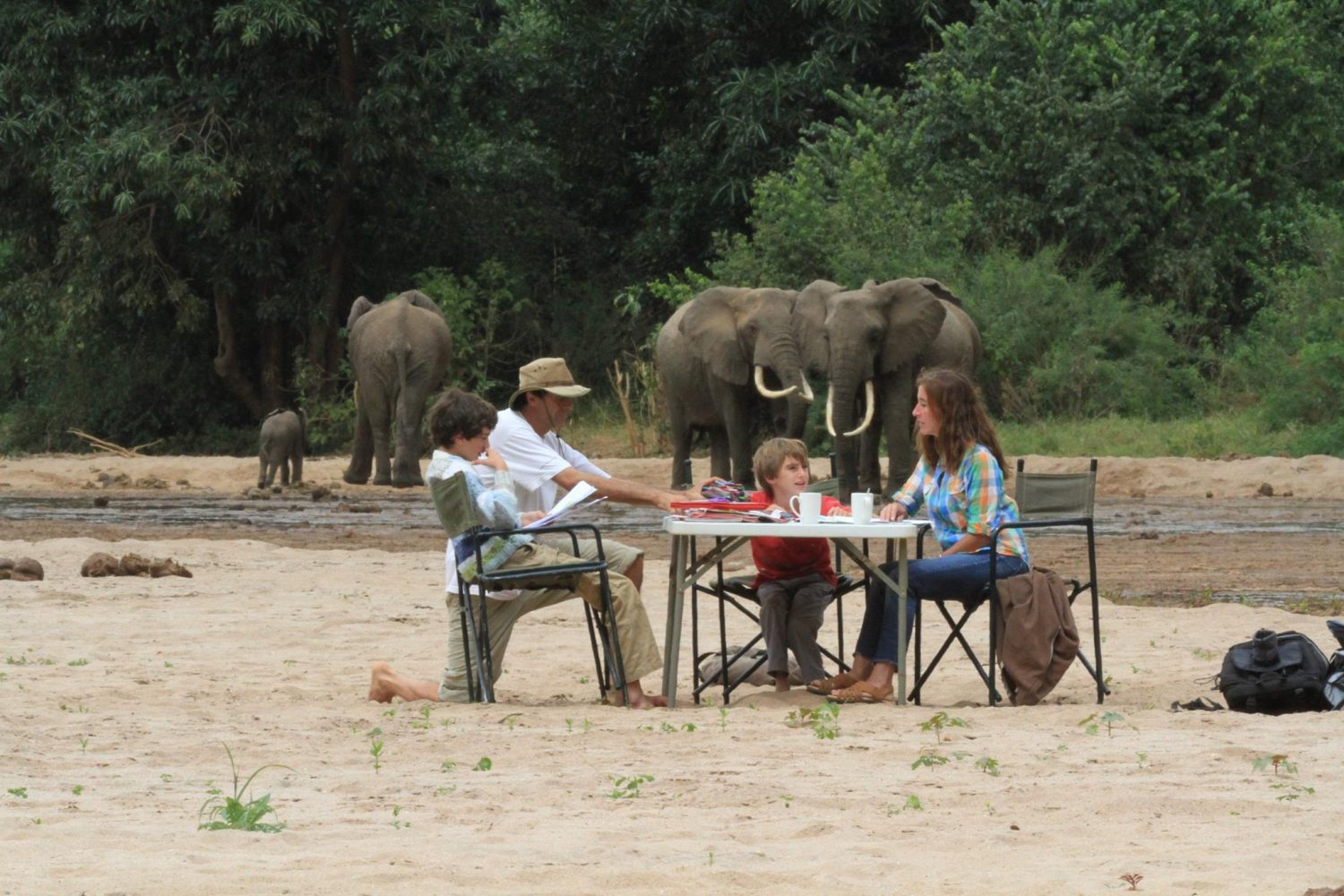 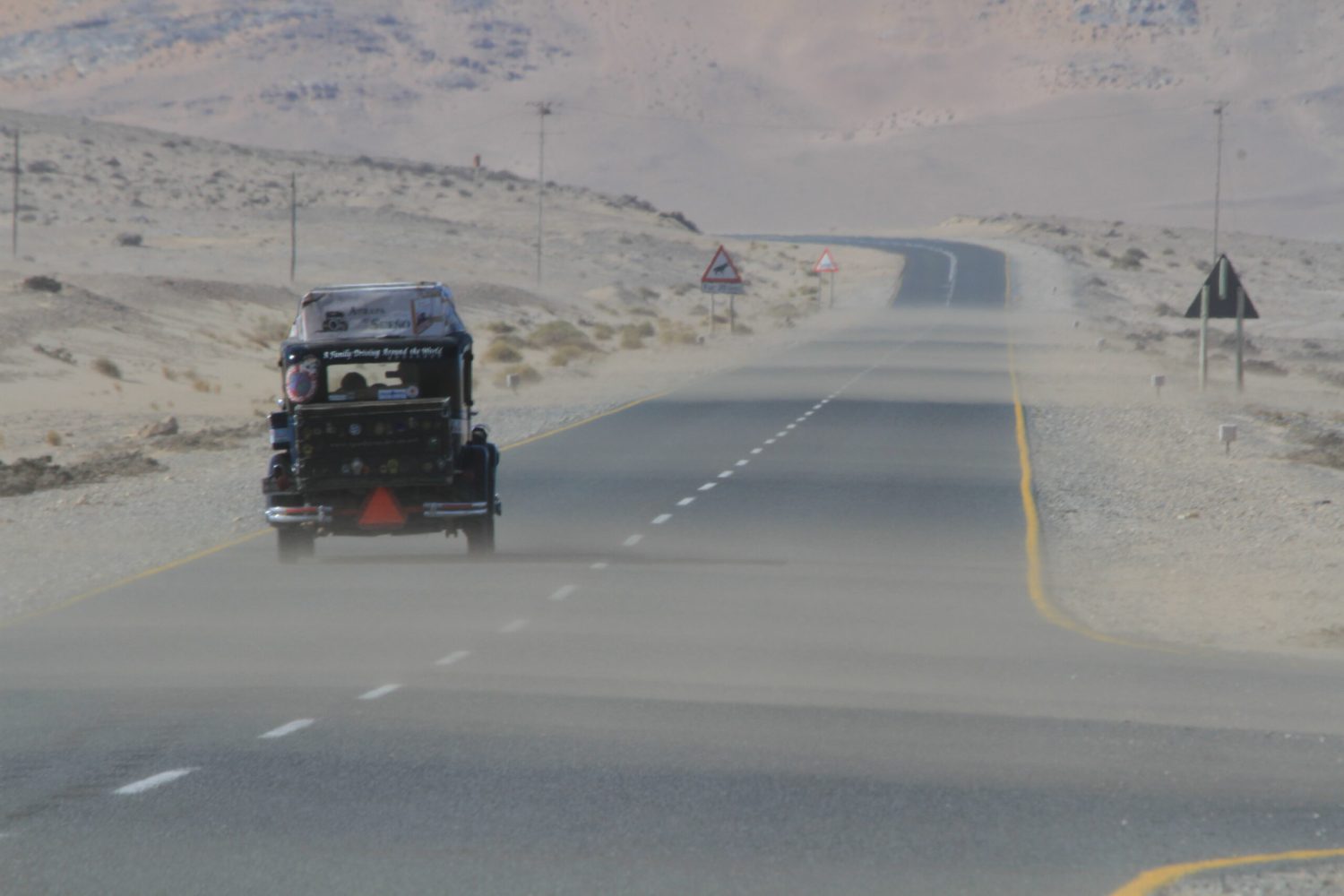 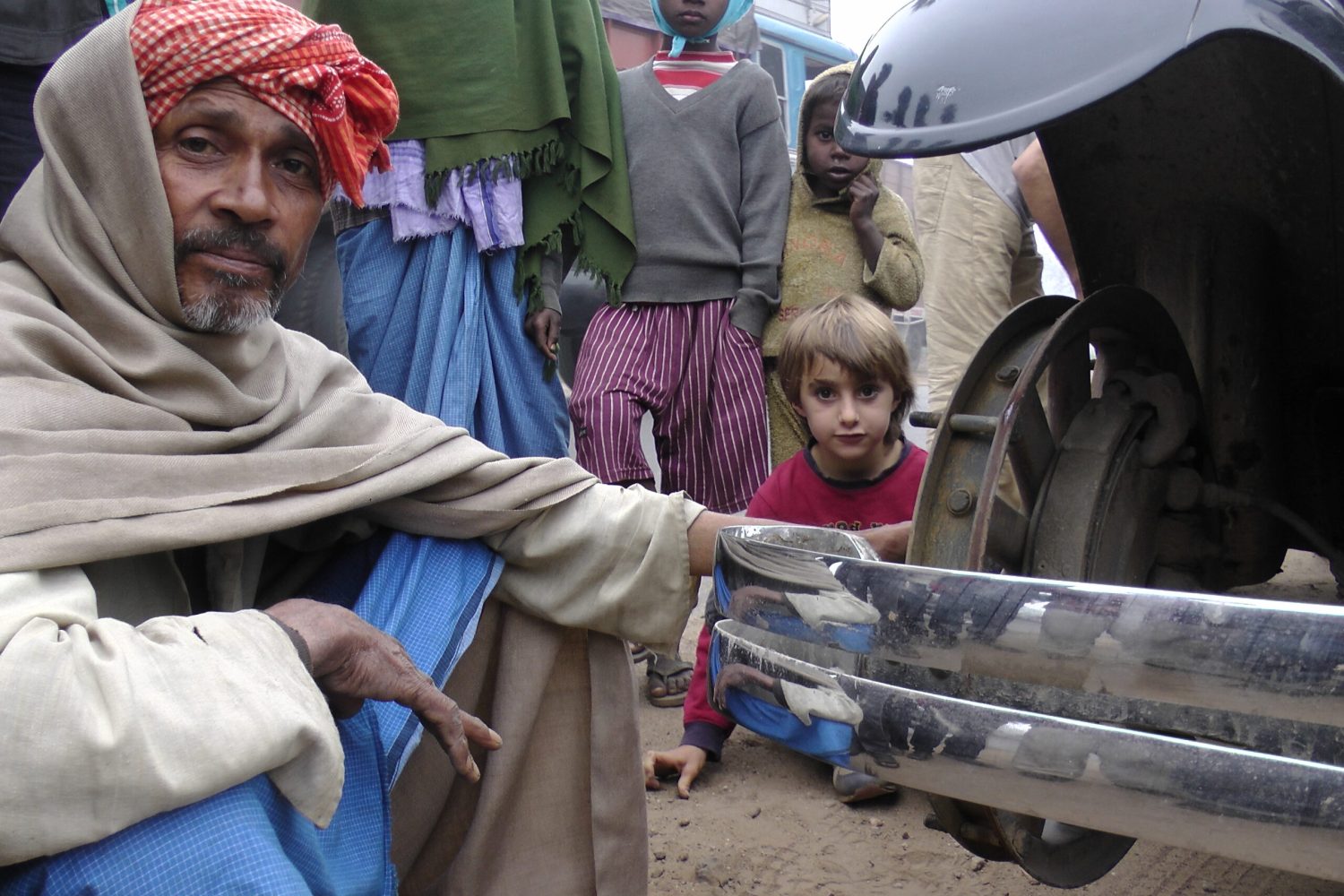 Herman and Candelaria talked about their trip for a decade before actually leaving. At first, they wanted to depart after their wedding, but six years of marriage passed by. As the couple began to dream of growing their family, the urgency to take their trip grew. They wanted to go to Alaska, then come back to Argentina to have their first child.

But as their travel plans changed, so did their family plan. Four children were born on the road. Pampa, now 19, was born in the United States. Tehue, 16 years old, arrived during a return visit to Argentina. Paloma, 14, was born in Canada. And the youngest at 12, Wallaby, was named after his birth country of Australia.

Like others who have experienced international overlanding with children, Herman and Candelaria found their lives enriched as their family grew. “Having children was not an impediment to continue traveling, but was, on the contrary, a reason to continue traveling,” Herman said. “We have the responsibility to show our children the wonderful world in which we live.” 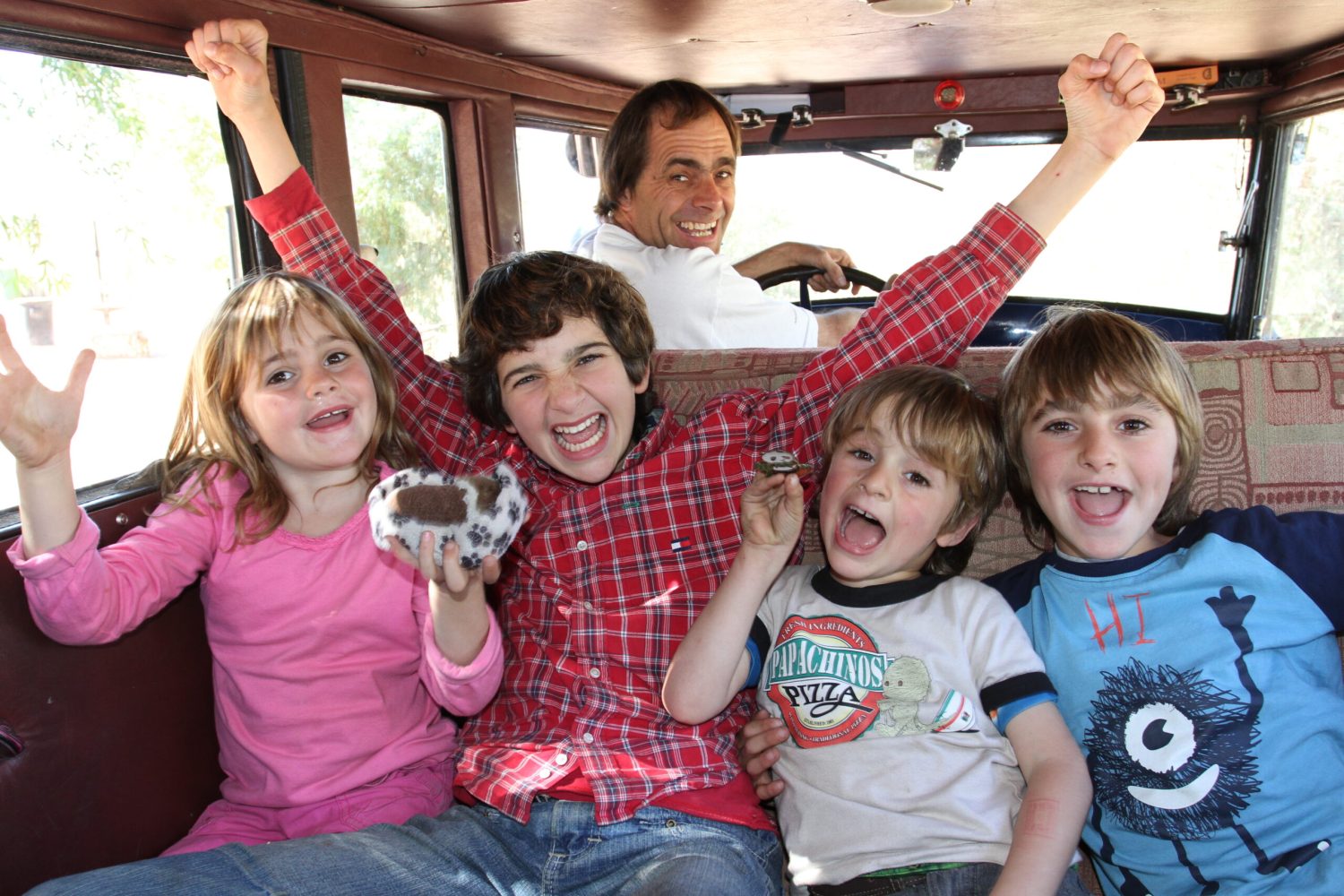 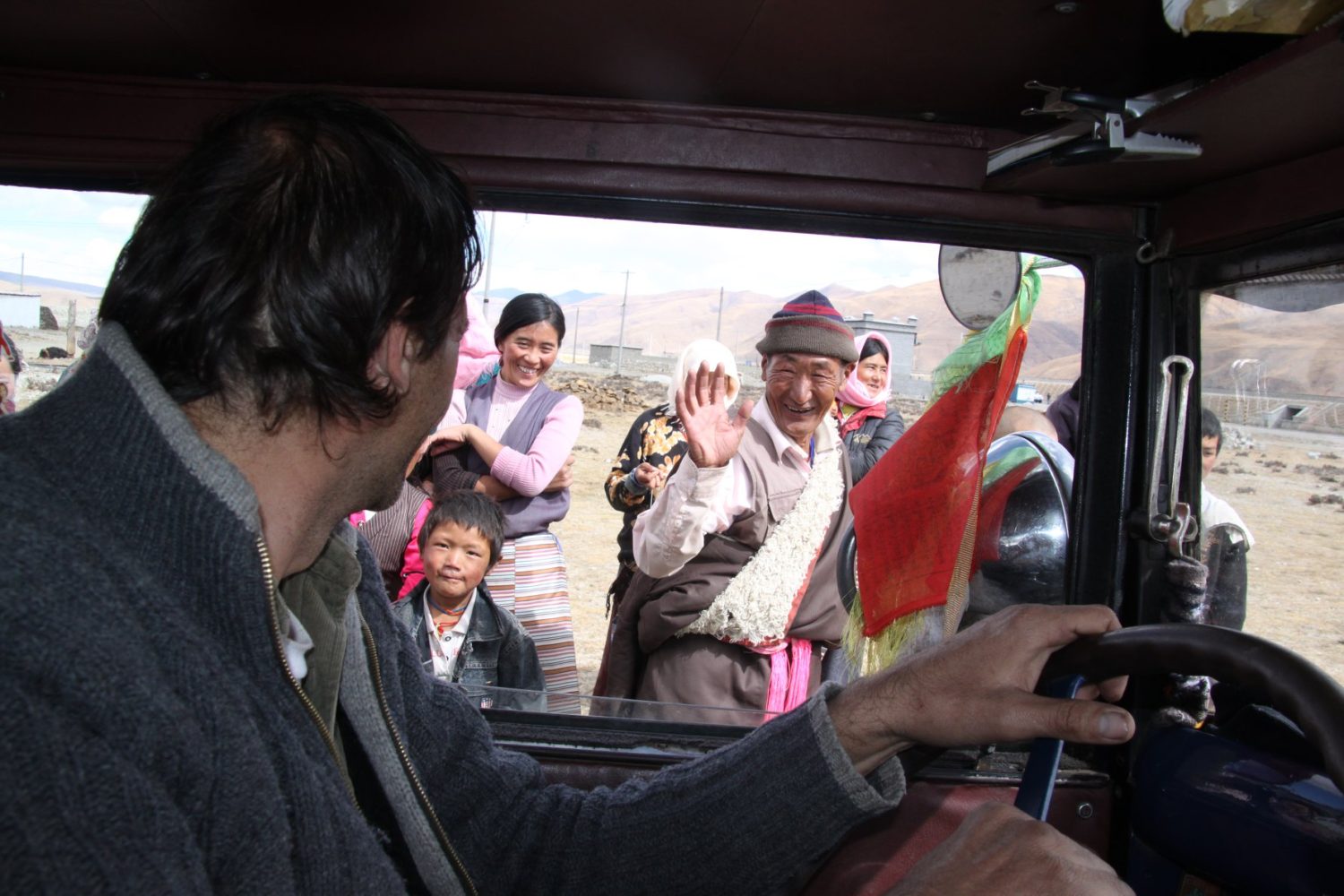 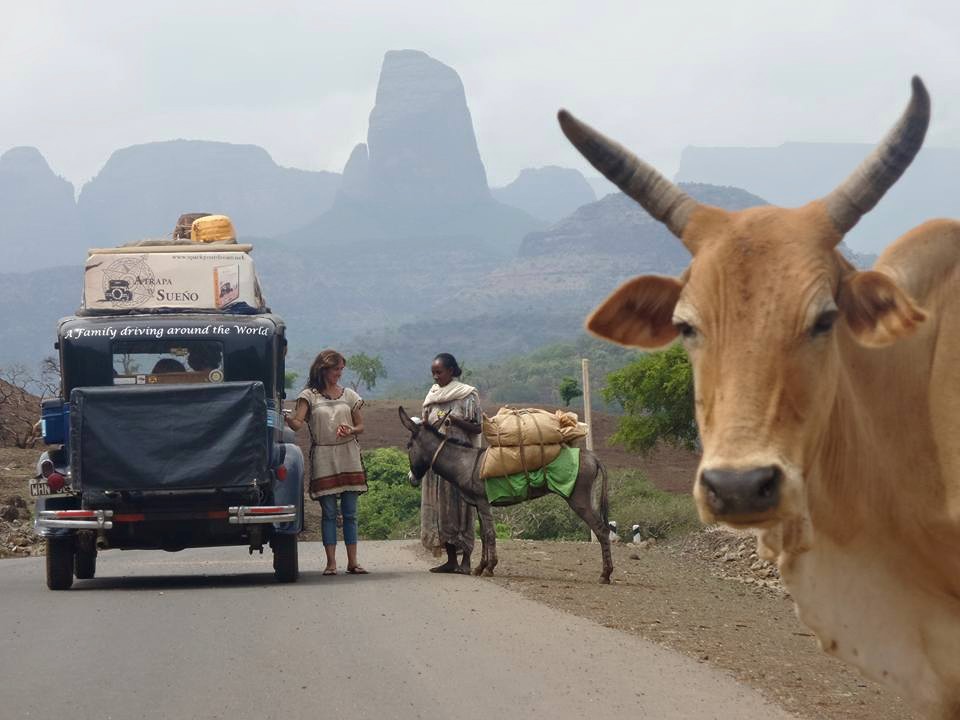 Herman spoke fondly of his children’s character in an intimate way only possible from someone who had the privilege of witnessing every moment of their growth first-hand. “They’re so open-minded and adapt easily to anything: new food, new culture, new everything. They’re fast to make friends because they knew they’d only be there a few days. They’re really easy-going with everyone. For them, any color or different thing is really good. They aren’t afraid of something different.”

Since departing Argentina in 2000, the Zapps journaled about their travels and the people they met. These personal records became four books, titled Atrapa Tu Sueño with varying subtitles. The English translation, Spark Your Dream, is a life-changing read filled with inspiring insight in addition to memorable travel moments that will make you laugh out loud or catch a lump in your throat.

I questioned Herman about his 22 years on the road, asking what he learned that wouldn’t have been possible to understand if he’d never left Argentina. He and Candelaria exclaimed together, “We are amazing!” He continued, “We are all amazing people. And the only way to find out is [by] testing ourselves. On a journey, you have to become so many things at the same time. And it’s amazing that you’re capable [of doing] everything. You can become a diplomat, mechanic, sailor—a million things. And that makes you feel like you can go for more things.” 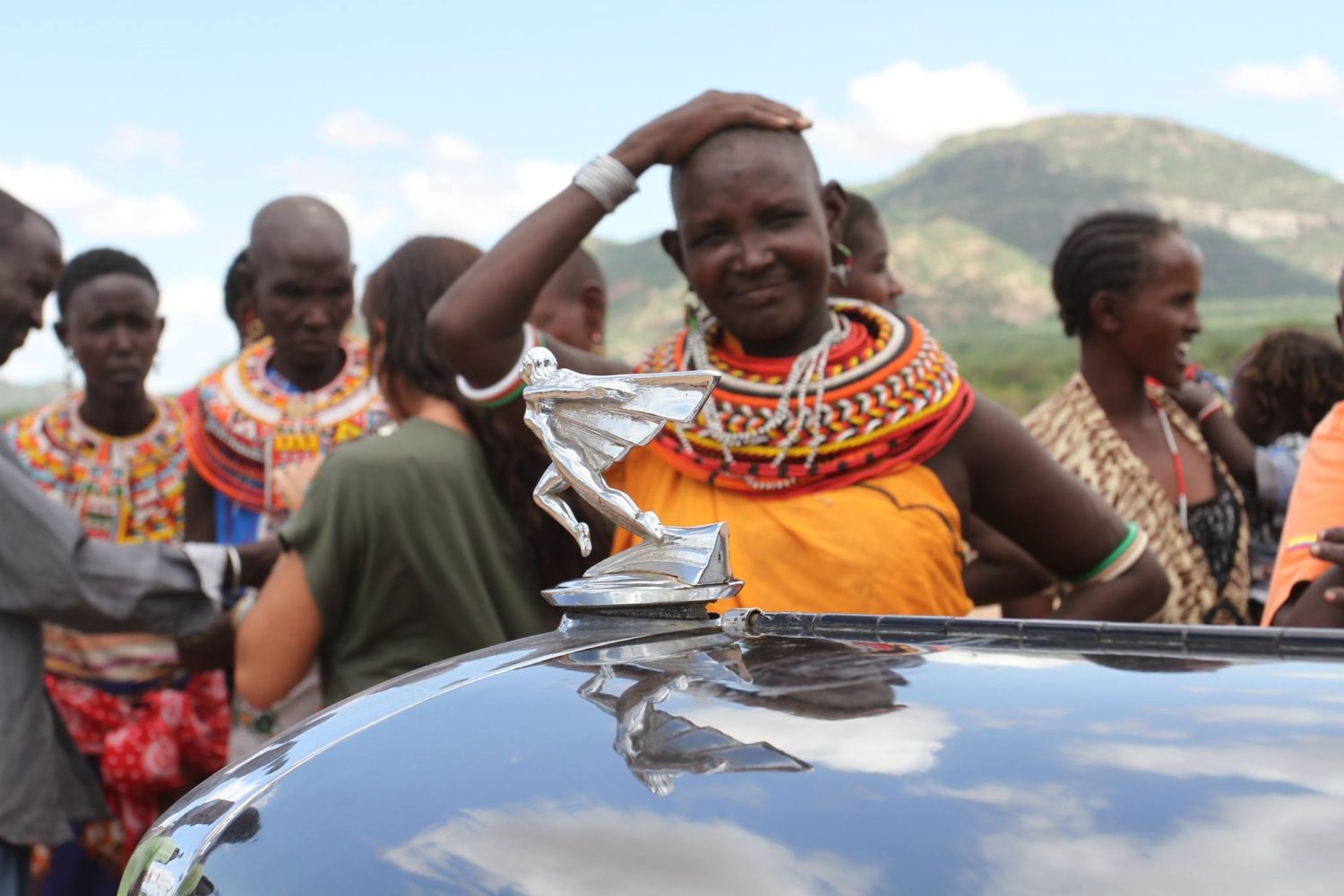 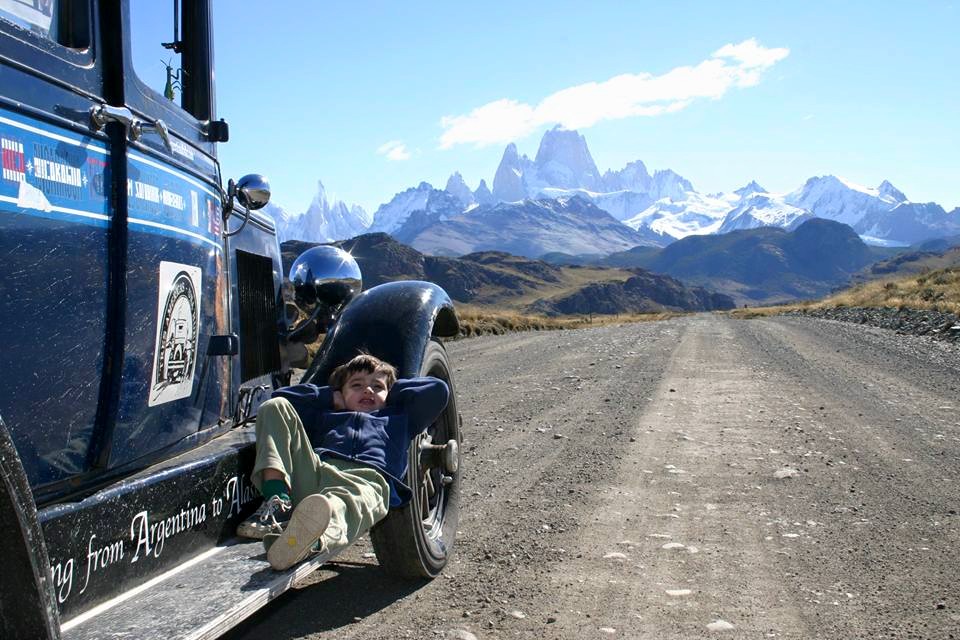 Herman, forever the dreamer, has decided he wants to sail around the world next. “We live in a beautiful world. The most beautiful thing God did in the world is people. There is no one more important than you. But there’s also no one less important than you. Go for your love and your dream. If you have your love and your dream, then you have it all.” 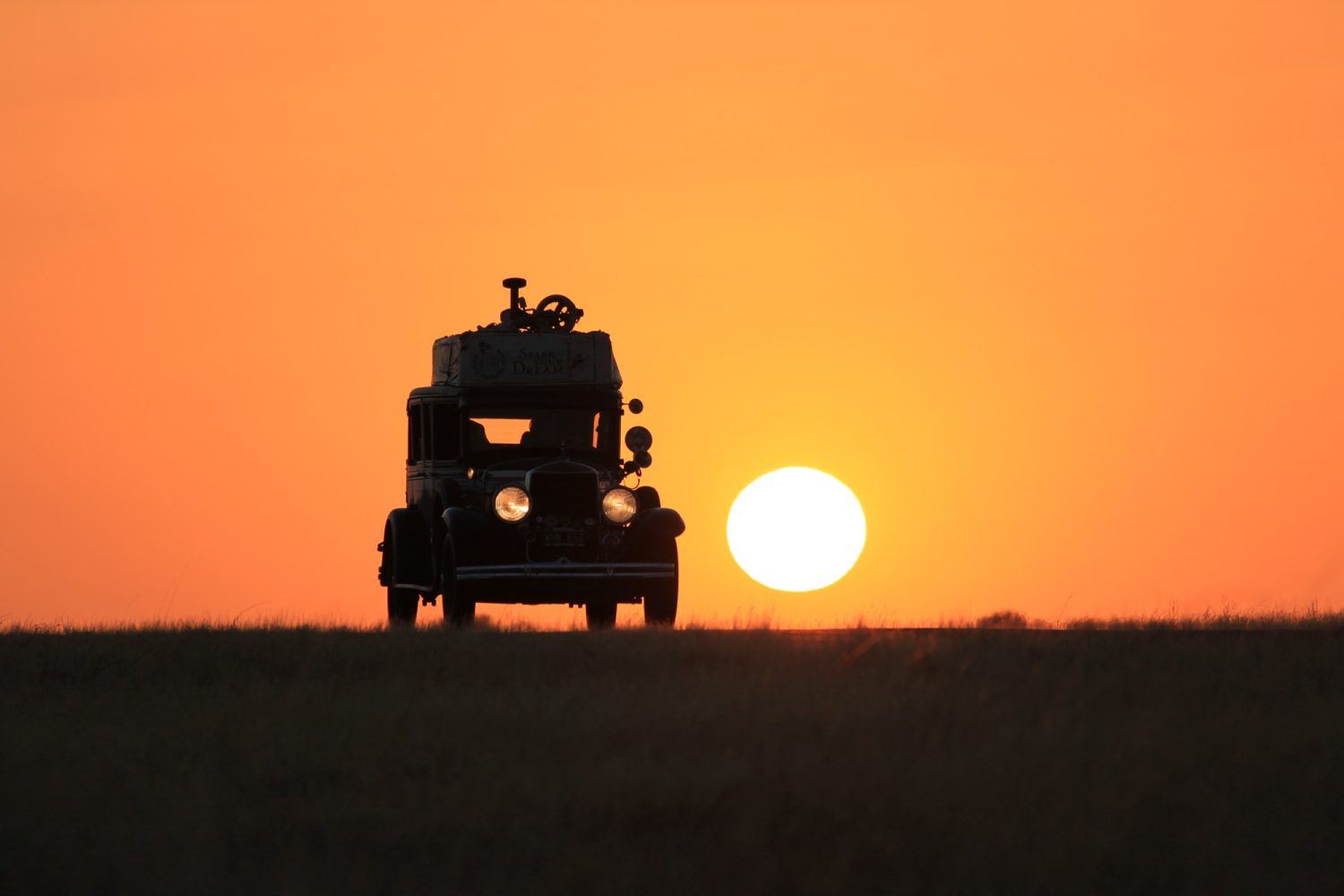 When Brittany Highland found out people actually drive around the world, she instantly thought, “We should do that.” With her husband, Eric, she has more than eight years of full-time travel behind her and a delightfully adventurous five-year-old named Caspian. She expects her family’s circuitous circumnavigation of the globe will last the remainder of her son’s childhood. Her family is currently in Central America heading south, where they will eventually ship their Jeep Gladiator and Alu-Cab Canopy Camper to Africa. Brittany is dedicated to empowering other parents to overland with their children, teaching life’s most valuable lessons through international travel. Join the journey at HourlessLife.com.