It wasn’t easy for Jocelin Snow to start riding motorcycles. As a teenager, she lived in a small town where girls just didn’t ride motorized bikes. But most of all, her parents disapproved. “My father was a principal, and my mother was a nurse. He said, ‘No daughter of mine is going to ride a motorcycle.’ They weren’t going to let me have a bike.”

So, she bought one without their knowledge. “I bought it from another kid, and it took me a year to pay it off. When I did, I took the school bus to his house, and he showed me how to ride it.”

Forty years later, Jocelin works internationally in the motorcycle industry. She recently hosted the GS Trophy with BMW in Albania, followed by a 10-nation tour of the Balkan region. She is a certified BMW off-road instructor, and she also runs a motorcycle riding school at her ranch in central California. When home, she’s coaching classes.

Being short and female were both obstacles to obtaining bigger bikes, she said, while waiting for her flight to Colombia, the location of her next guided tour. Decades later, she still encounters pushback when trying to purchase dealership bikes. Many female riders say they’re also not taken seriously at the cash register.

I was surprised myself recently when I went to buy a new helmet and the sales representative asked me if it was for the front or the back of the bike. I answered him with a rather sarcastic look. Did he pose this question to male customers? Are helmets made differently for the front and back? He could have asked me instead what I was looking for in a helmet, or what type of riding I preferred. 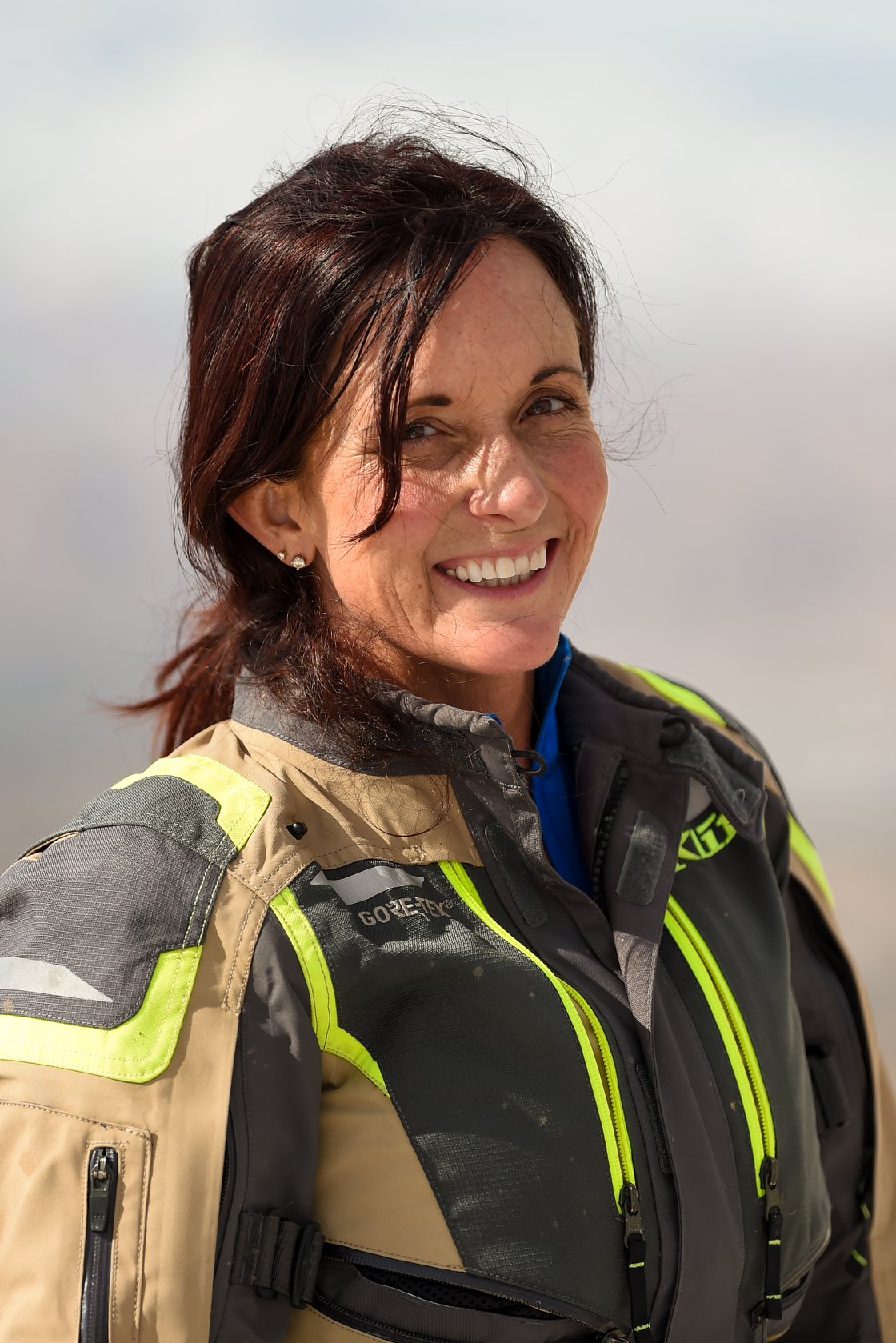 But back to Jocelin. She traded in the dirt bike on a 250, then decided she needed a bigger bike, a Kawasaki Ninja 750. She said, “The dealership told me that was a big boy’s bike. I had to go to New Hampshire to find a dealership that would give me the time of day so I could buy this bike.”

But she wanted more than a bike. She also wanted to be part of a community of riders. So, she joined what was essentially a Harley-Davidson event, a “toy run” at a civic center. “My bike stuck out among several hundred motorcycles, and I kid you not, I was the only female rider there. I felt like I was riding a motorcycle naked. Now, it’s just as normal to see a female on a bike as a male.”

On a trip to Mississippi this summer on my loaded BMW F 750 GS, I was also the subject of stares and pointing. I had stopped at Walmart for donuts—breakfast for the river guides I was meeting that morning. But when I returned to my bike in the parking lot, I had drawn such a large crowd that I wound up giving the donuts to the onlookers. “You do this alone?” they asked. The questions flowed: “Where are you from? Where are you going? Do you ever fall over?” One bashful little girl asked if she could touch my riding gear, and she smiled broadly when she did. I felt more like a fighter pilot hero that day than a sweating, worn-out rider.

Jocelin had also entertained crowds of curious people, but “that got old quickly.” When she decided to race, “That was a battle, too. I had to fight for it. I remember feeling so defeated because the men didn’t want to let me in the class, but my biggest struggle was on the track. The guys would go out of their way to make aggressive passes, and I was taken out on the track on a regular basis. I started tucking my hair up and I practiced my riding style to look like a guy’s, kind of hunched over. I had a better result.” 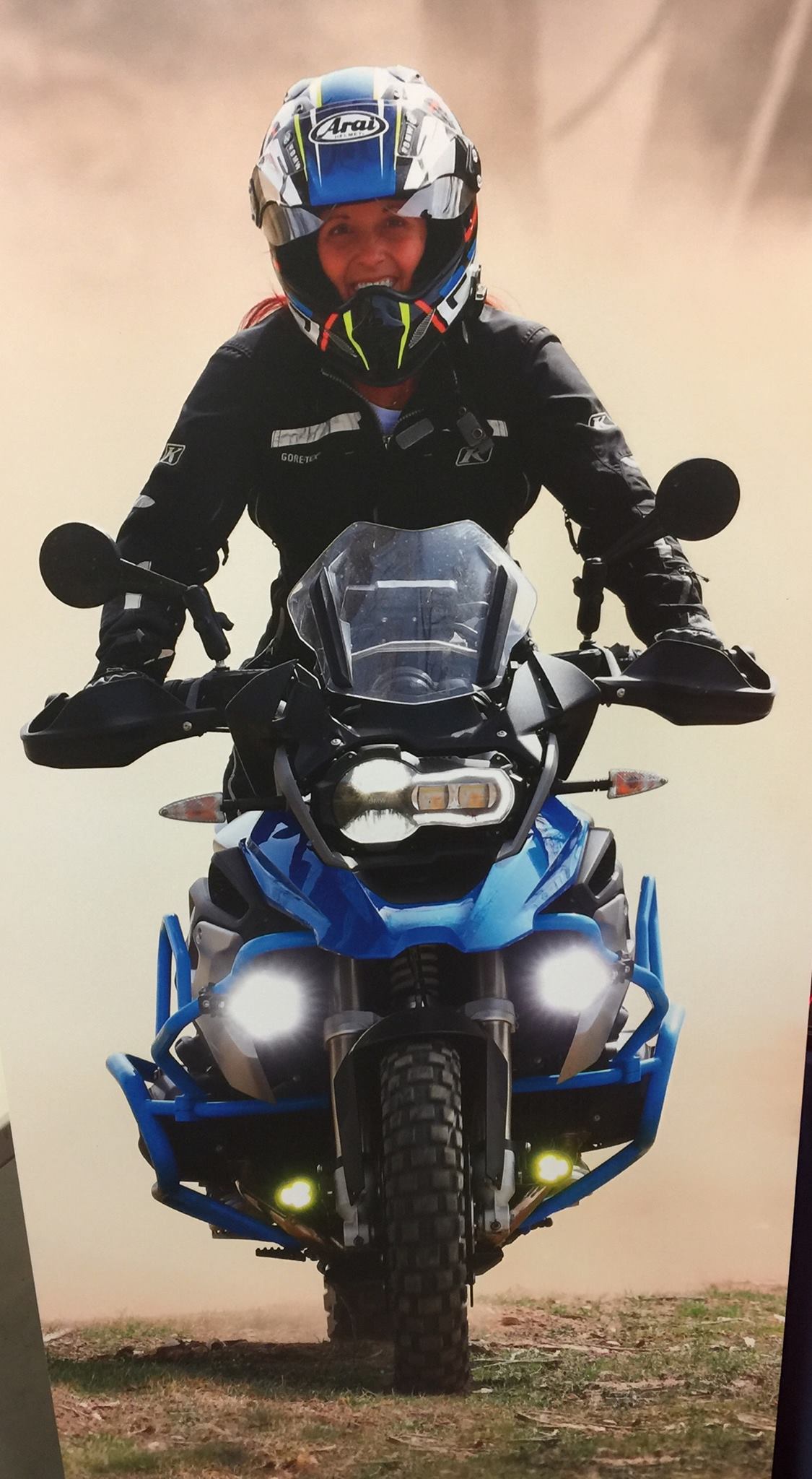 As a Harley-Davidson secret shopper, it was Jocelin’s job to assess dealerships. “I could get on a bike and roll it out in the middle of the floor, and they wouldn’t give me the time of day. They wouldn’t even come out of their offices, or they’d say, ‘You looking at this for your husband?’ The only time I could get attention was in the apparel section.”

As hard as the struggle has been, Jocelin says women may have fought a little too hard, swinging the pendulum beyond the mark of equality. “Now there are women’s groups passing a baton all over the world from country to country. It’s a big deal, but how would we feel if there was a men’s only motorcycle relay? We’d lose our [expletive]. What’s the difference? It’s not right. Women have come a long way, but they need to put the brakes on and chill out. I feel like they’re trying to almost segregate themselves.”

Eva Rupert started riding two decades ago when she was in her 20s. “I got a motorcycle license on a whim,” she said. “I didn’t come from a motorcycle background. It was never part of my experience growing up. But I got this wild hair that I was going to get a license and buy a 1979 Honda CV 750. It was $800, and I had $800.” 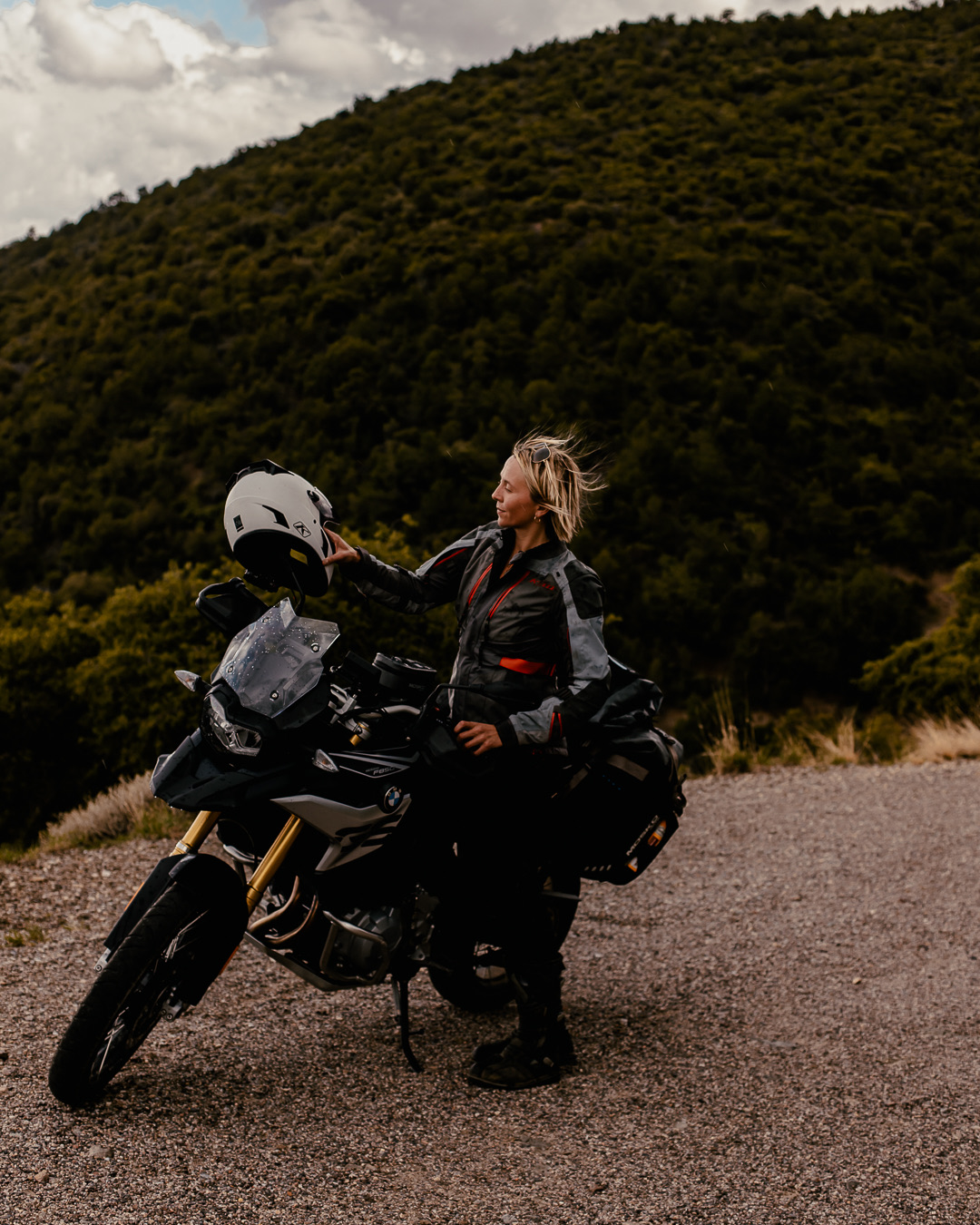 As a fencing coach, she used the bike to commute between Queens in New York City and her hometown of Danbury, Connecticut. “It was very practical. It was cheap, and I had some mad primitive skills. I made these wool-felted neck gators and muffs and mittens to stay warm. I was clueless.”

So, she started following a group of Harley riders. “There’s this little place in Danbury called Marcus Dairy and the Harley guys would gather there. I was kind of scared of them, but I thought I could learn from them. They would take off on their rides and I would take off behind them, trying to figure out what motorcycling was all about.”

These days, Eva is the motorcycle community coordinator for Overland Expo. She is a content creator and writer, working primarily in social media and motorcycle industry relations. She rides a Yamaha Ténéré but just bought her first Triumph Scrambler 1200 EX. “It’s like riding a dirt bike dressed up in a ball gown. This is perfect for big-bike-adventure stuff.”

Women are beginning to come into their own power within the industry, purchasing bikes and upgrades, acquiring training and licensing, and entering other areas traditionally reserved for males. Eva believes that “women in motorcycling are experiencing a bit of a renaissance, and public perception is changing. We’re making it more obvious that motorcycling is for everyone.” 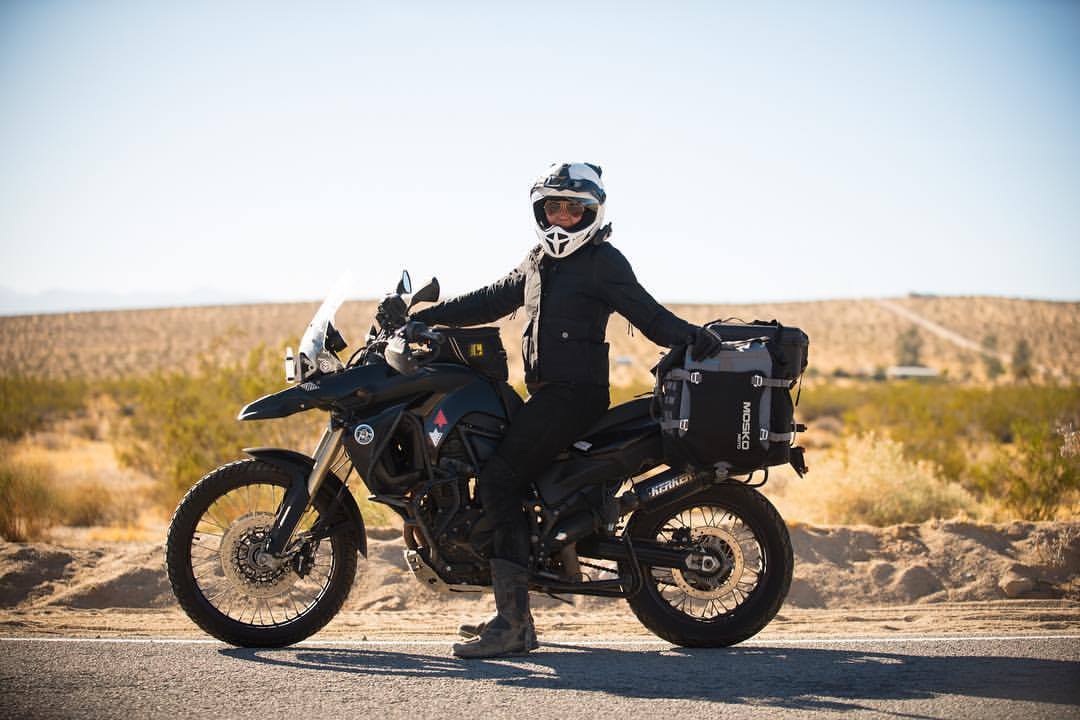 Although she has offers to attend women-only events, Eva says she prefers to ride “with the dudes.”

“You might as well get along with the boy’s club. I can’t speak for the chopper boys, but adventure guys are awesome, nice, and kind, and they ride like beasts. They’re also typically really open to helping you out. I have a litany of guys I can call if I have a question right now.”

Motorcycling is made of camaraderie and community that transcends gender, she said. “It’s nice that you don’t have to be one of the dudes. I get to be this strong, empowered woman doing my thing. I feel like there is space for everybody, and I love that.”

“Our only responsibility is to keep riding motorcycles. If we do that, by the very fact of living our lives and having our adventure; it incidentally inspires others to do the same. It elevates the industry as a whole.” 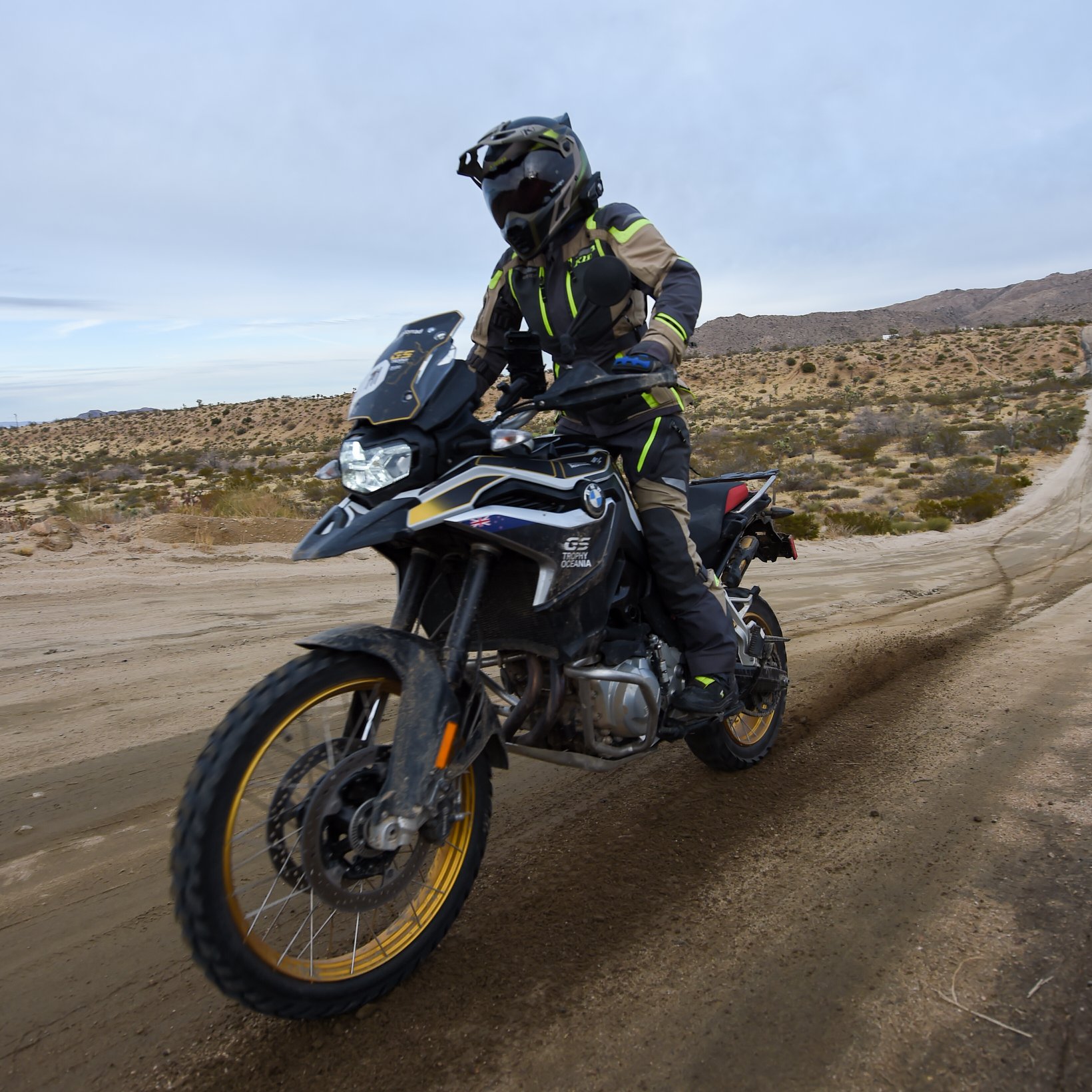 Jocelin agrees. “I feel like we’re in the creamy spot now. We’ve made good progress and should stay equal and not demand so much. There definitely are some amazing men out there who want to teach and help, but I feel like they’re scared, like they’re doing it because we’re so loud and angry. Sales guys in the dealership do need some education. Companies are making models of motorcycles that are more catered to women’s needs. The BMW 310 GS, for example. It’s for smaller, more petite riders who want to get into adventure but aren’t ready to jump on 1200. We really have come a long way.”

As for the dealership that refused to sell her a bike, “I ended up calling another motorcycle shop about an hour away. I got the sales manager on the phone and said, ‘I’m a female and I want a big bike. Will you sell me one?’ They treated me like a queen. Since then, I’ve purchased five more motorcycles from that dealership, and I’ve sent them 18 new motorcycle sales.”