In February 2011 my wife Kate and I set off on our motorbikes from Wollongong in Australia heading for Woolwich in south east London. In 5 months we covered about 21,000 km across 20 countries. Firstly we crossed the emptiness of the great Aussie outback and then negotiated the manic traffic of Bangkok, Kathmandu and Delhi. Next came the fabled and dangerous Karakoram Highway through the mountains of Pakistan, up and over the 4600 metre Khunjerab pass and into China. More rough roads through Kyrgyzstan and Kazakhstan led us to Russia, through Ukraine and then the final 5,000 km push through Europe.  www.wollongongtowoolwich.co.uk

Article and photography courtesy of Will Wilkins:

“Now we were safely out of Pakistan things should have started to get easier. Not here though, not for us. Here out in the far western provinces of China, still thousands of miles from the UK our adventure continued…..”

The first job once loaded up was to get some petrol for the bikes. We pulled up at the pump of the modern looking petrol station and waited for the attendant to come over. He made it clear that the bikes were not allowed to be filled from the pump and we should move over to the far corner of the petrol station. There was nothing over there but as we were getting no fuel at the pump we pushed the bikes across and waited. After a minute another attendant came out of the main building carrying a large aluminium kettle. Was this anything to do with us? Yes, it would appear it was. He filled it at the pump and walked towards us, indicating for us to remove our petrol caps. The spout of the kettle was too short so as he tried to fill my tank, petrol spilt all over my bike. Irritated, I told him to stop and after hunting around in the bin, I found a plastic drinks bottle which I cut open to use as a funnel. With this extra bit of high tech equipment, we soon filled up and hit the road.

Puzzled by this little fiasco, but full of fuel, we started out on the 300km leg to Kashgar, following Sadiq who was travelling by car, with a driver, all paid for by us as part of our fee. We cleared town quickly and were soon out onto a bleak, open plateau at nearly 4000m altitude. The surrounding peaks soared again to 7500m. At that altitude Kate’s bike couldn’t manage more than 50 MPH. It was a painfully slow and cold ride. It had seemed quite warm in Tashgurgan that morning so we hadn’t worn our thermal underwear, which turned out to be a bad decision. We were on the edge of the Taklimakan Desert and could see across the plains to the huge, distant, rolling sand dunes. At one point a dust storm blew up, taking away any meagre warmth the sun had been giving. It was a brilliant feeling to be out there, but as we struggled on, it began to feel like pretty bloody tough going. We saw Sadiq pull over in his car further ahead of us, and pulled in behind him, happy to get off the bikes. It appeared that we were actually at a roadside café (we would never have spotted it) and that we were stopping for lunch. The building was little more than a stone hut surrounded by broken rock and backed by huge sand dunes. A faded sign above the door swung in the wind. The Chinese script gave us no clue but a picture of a sheep made it clear what we’d be served.

Inside the place it was so cosy and warm. Sadiq let us sit at the only table whilst he and his driver sat on rugs on the floor. Our table was also next to the wood stove which soon became Kate’s best friend. We didn’t place an order, the food just arrived. Two steaming bowls of delicious hot soup and crusty bread. Well, that’s what we thought it was when it first arrived at the table. On closer inspection, the reality was a little different. The soup was actually a bowl of hot water. In it floated a hunk of fatty dead animal, half a potato and a piece of carrot. The surface of the water was covered in a layer of oil floating in big bubbles. The loaf of bread, made before the beginning of time, was so hard that I couldn’t break it in my hands so we had to take it in turns dipping the whole loaf into the hot, fatty water to soften it enough to gnaw a piece off. Trying to nibble any meat off the lump of animal was also pretty difficult as the only eating implements were chopsticks. We were cold and hungry and we’re both pretty good at coping with the unusual, but after a couple of bites we reached our limits. We just couldn’t stomach the meal. After Sadiq had finished eating, he came over to check if we were OK and seeing we hadn’t really touched our food asked why, were we vegetarians? I explained that we did in fact eat meat but I couldn’t actually find any. I lifted the hunk of animal out of the water and pointing at the pipes, tubes and other gristly bits, suggested that when the animal was alive this bit, although unidentifiable, would probably have been very important to it!

Back outside on the road, after sitting in the warm hut for the last half hour, it felt bloody freezing. We rode along and soon both started to shiver uncontrollably. The road turned to dirt as we skirted a large sand bowl. Way off in the distance I could see another vehicle throwing up a trail of dust. I was seriously beginning to wonder if I could get that far without stopping to try to warm up. Just as I was reaching the point of despair, the road took a sharp fork to the right and we disappeared off down into a deep, rocky gorge that protected us from the cold wind. We were now in a mountain pass of jagged, broken rock. The road wound down and down. On one of the tight turns there was the remains of a smashed up truck, its cab totally stoved-in against the unforgiving rock bank. The driver wouldn’t have stood a chance.

Stay tuned for more adventures from Will and Kate.w 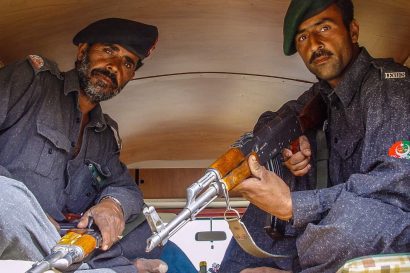 Landcruising Adventure: How to deal with police officers while overlanding 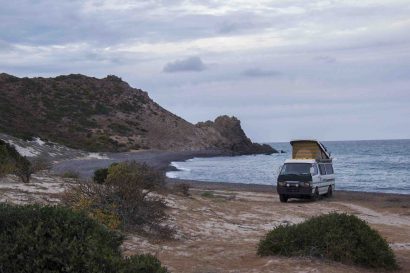 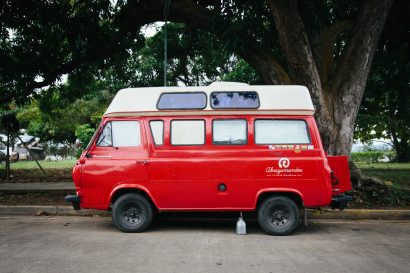