#1 The 80-Series Land Cruiser can keep up with modern life.

It’s 2020, and we’ve officially become coddled by the conveniences of modern life. While a Land Cruiser 40 may be the model that evokes the most emotion, it’ll also break your back on a long drive. The 60 Series has more room and is more comfortable, but largely shares a powertrain with its predecessor—while robust, it doesn’t make for being the thing to drive every day.

The 80 Series is the first Land Cruiser to be coil sprung at all four corners, and it’s downright plush in comparison to older models. This coil-sprung suspension is also fantastic off-road. So despite the 80 Series being more luxury-oriented, it’s the most-capable Land Cruiser out of the box, thanks to that flexy suspension and available front and rear electronic axle locking differentials.

Aside from the first few model years, they were equipped with relatively powerful fuel-injected engines, with a factory-designed TRD supercharger available for those who want even more. They’re quiet inside thanks to modern design, with plenty of room to store gear, and can also carry up to seven people. Did we mention the freeze-you-out air conditioning and power windows that work? Oh, and you can even hear the radio!

TL;DR—The 80 Series has plenty of character compared to a modern car, but it doesn’t have vintage car inconveniences.

#2 They were built for a time of Japanese excess.

Japan in the 1980s went through a major economic boom, and for the first time, we started to see the word “luxury” in the same sentence as “Japanese car.” Whereas the prior generations of Land Cruiser were primarily designed to be exported to foreign utility markets, the 80 was built as a rugged go-anywhere machine capable of dominating the domestic SUV market in Japan and the world’s largest car market—America.

The Land Cruiser 80 was intentionally overbuilt, with thicker sheet metal than I’ve ever seen on another car, and a massively overbuilt, near-commercial drivetrain. In an age where off-road vehicles commonly saw massive drivetrain failures when pushed to their limit, the 80 Series is still strong by today’s standards. Even when modified with larger tires, you’ll seldom hear of anything breaking. It’s one of the reasons the 80 Series can command increasing values—you can buy it and hit the trails right away without having to worry about the vehicle being past its prime and requiring restoration. An 80 with 150,000 miles on the clock is considered low mileage. A Jeep of the same age with that many miles could be toast.

TL;DR—With sheet metal this thick, you’ll rarely see a door ding on an 80. 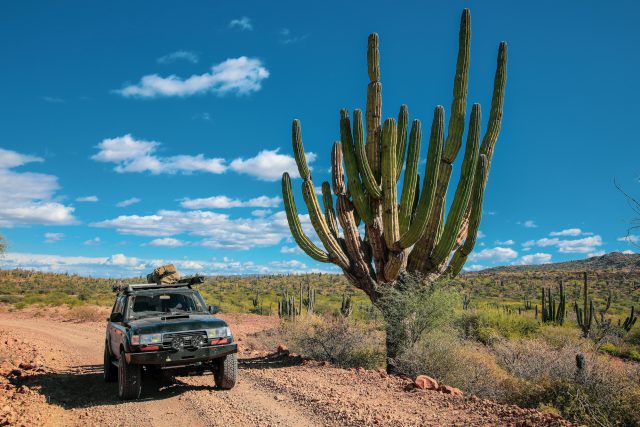 #3 The aftermarket has embraced them, and parts are easier to find.

Even though the very first 80 Series is over 30 years old now, we’re still seeing new companies developing parts for the platform—that’s because it’s a robust chassis that still has decades of service left. While I’m not suggesting that the 40 and 60 Series models do not have an enthusiastic aftermarket, you won’t find the breadth of aftermarket accessories available for those models. Regardless of what you want to do with your 80, whether that be turning it into a rock crawler or a world-conquering overland machine, there are multiple companies who specialize in it, with decades of experience.

The 80 also benefits from better parts availability since there were so many more sold within the United States. While there are certainly some parts that are hard to find, solutions are available, and thanks to the build quality of the machine, you’ll seldom need to worry about it. Compare this to the 60 Series, where parts have become incredibly scarce and expensive.

TL;DR—You can modify it for your needs easier than almost any other classic 4WD.

While they’re even more expensive than US-spec 80 Series, the 1HDT-equipped HDJ81 has been making its way over from Japan for the last few years through importers such as Land Cruisers Direct, and others. This might be personal bias, but if you can get past the fact that they’re right-hand-drive, you’ll end up with the ultimate 80 Series—and typically one that has been well maintained, thanks to Japan’s yearly automotive inspections that demand it.

The 1HDT is widely regarded as one of the most reliable engines that Toyota has ever put in a Land Cruiser, with some years featuring completely mechanical fuel injection that requires no ECU to function. The 1HDT drives about the same as a US-spec 1FZ-FE powered model, but has the ability to be safely tuned to deliver much more (the Aussies have been doing it for years!). I have one, and it’s not only capable of maintaining modern highway speeds, but while doing so, it will return nearly 20 mpg. You’ll see even better fuel economy on the trail, almost double the economy of what some see with the 1FZ-FE gasoline engine.

TL;DR—The HDJ81 is like turning the clock back 10 or 15 years on mileage and maintenance.

#5 They’re more future proof than any other classic Land Cruiser.

Face it, cars are going to change dramatically in the next 20 years. They’re accelerating faster, braking faster, and cornering faster than ever. And while a modern economy car will still blow the doors off of an 80 Series, you’ll at least stand a fighting chance with keeping up as the world goes electric. The 80 Series gives you reliable anti-lock braking, fuel injection (imagine how hard it will be to find someone to work on a carbureted vehicle in 20 years), and later models even feature OBD software to aid in easy repairs.

The world is rapidly changing. While there will always be a place for the 40 and 60 Series, for those of us to who love Land Cruisers and plan to use them as intended for years to come, I think it’s inevitable that the 80 Series becomes the future classic for overlanders and off-road enthusiasts alike looking to take their ‘Cruisers on the open road.

TL;DR—The 80 Series will be around for a while.