We rolled up the 20-foot-tall garage door a little bit before 3:00 a.m. The temperature inside the WWII-era steel Quonset hut plummeted as the wind forced snow and ice in around us. One by one we pushed the bikes and sidecars outside, through the loose snow drift that had formed at the entrance to our overnight sanctuary. Under the intense halogen lights, we made our final preparations for the start of our journey to South America.

“I have worked here in Deadhorse, Alaska, since I was 19 years old, and we have never seen motorcycles up here in the winter,” an onlooker stated. Standing in the middle of a large, windswept parking lot, I plugged Ushuaia, Argentina, into Google Maps on my phone. “Directions not available to this location” was the response.

To this day, most people don’t realize there is no uninterrupted route between North and South America. The main obstacle is the Darién Gap, a 100-mile stretch of jungle and home to the Kuna Indians, known locally as El Tapón (The Stopper). Having been crossed only a handful of times, and only in the dry season from January to April, it presents a significant logistical challenge.

The decision to start the expedition on November 11 was both strategic and symbolic. The team consisted of mostly US Army veterans of Iraq and Afghanistan. And leaving on the US holiday for Veteran’s Day meant the first hurdle of the trip, the Dalton Highway from Prudhoe Bay, Alaska, to Fairbanks, would have less commercial truck traffic—a big advantage when on the narrow, snow-covered roads that zigzag up Atigun Pass, 150 miles north of the Arctic Circle.

With specially designed sidecars, auxiliary lights, backup batteries, and heated gear, we crossed the 3,000 miles of Alaska and Canada in just over two weeks with just one major accident to slow us down. An out-of-control car sideswiped one rider, disabling his bike temporarily. The bike was fixed within the week, and in Bend, Oregon, we dropped the sidecars to continue to Mexico and Central America on two wheels. After encountering night and day temperatures that dipped in the negative twenties, California and the warmth of Baja, Mexico, were a welcome relief.

Our ability to gain final permission to cross the Darién National Park was in question all the way up to our arrival in Yaviza, Panama, on January 10. We were five days over our original schedule, but the possibility of being turned away in Panama City dogged us constantly as we made our way through Central America, spending Christmas Day in Guatemala and meeting up with a KLR club in Costa Rica for a night of celebration.

Since the early days of Darién Gap crossings in the ’60s, ’70s, and ’80s, the political situation between Panama and Colombia has been tenuous. With no roads, bridges, few villages, and a dense and treacherous jungle teeming with insects and venomous snakes, it has long been a home for drug and human traffickers and anti-government paramilitary groups. Once we reached Panama City, news arrived that we had been granted permission to traverse the jungle, provided we be accompanied to the Colombian border by armed members of Panama’s Senafront Border Patrol.

The road runs out in Yaviza, a small riverside village that serves as a central trading post at the edge of the jungle. At the end of the road, a narrow suspension bridge crosses the Chucunaque River, then a narrow footpath leads south, into the vast undeveloped jungles of the Darién. We loaded four bikes onto narrow dugout canoes made of roughly hewn solid hardwood and powered by small outboards. Two days later, amid unseasonably harsh rains, we reached the village of Paya, the last town in the jungle before the overland trek into Colombia.

The heavy rains and deep mud slowed progress on the motorcycles. Within a few miles, we lost one bike’s clutch. The three other bikes made it a few more miles the next day before they too gave out. With the help of the local Kuna Indians, we began the arduous task of dragging the motorcycles by hand. Cutting away the jungle, using pulleys and ropes, we worked from sunup to sundown, eating rice and plantains, filtering mud water to drink, chopping a camp out of the jungle each night.

Late on the eighth day, we crossed the Atrato Swamp by boat and emerged from the Darién jungle in the town of Turbo. A few days of recovery and scrounging repair parts for the bikes followed, then we were back on the road. Restarting our adventure in Cartagena, we traveled south into Colombia’s famed coffee region. After some much-needed rest, we continued south toward Peru. We met up with friends, hiked into the mountains surrounding Machu Picchu, and planned the last leg of our route. 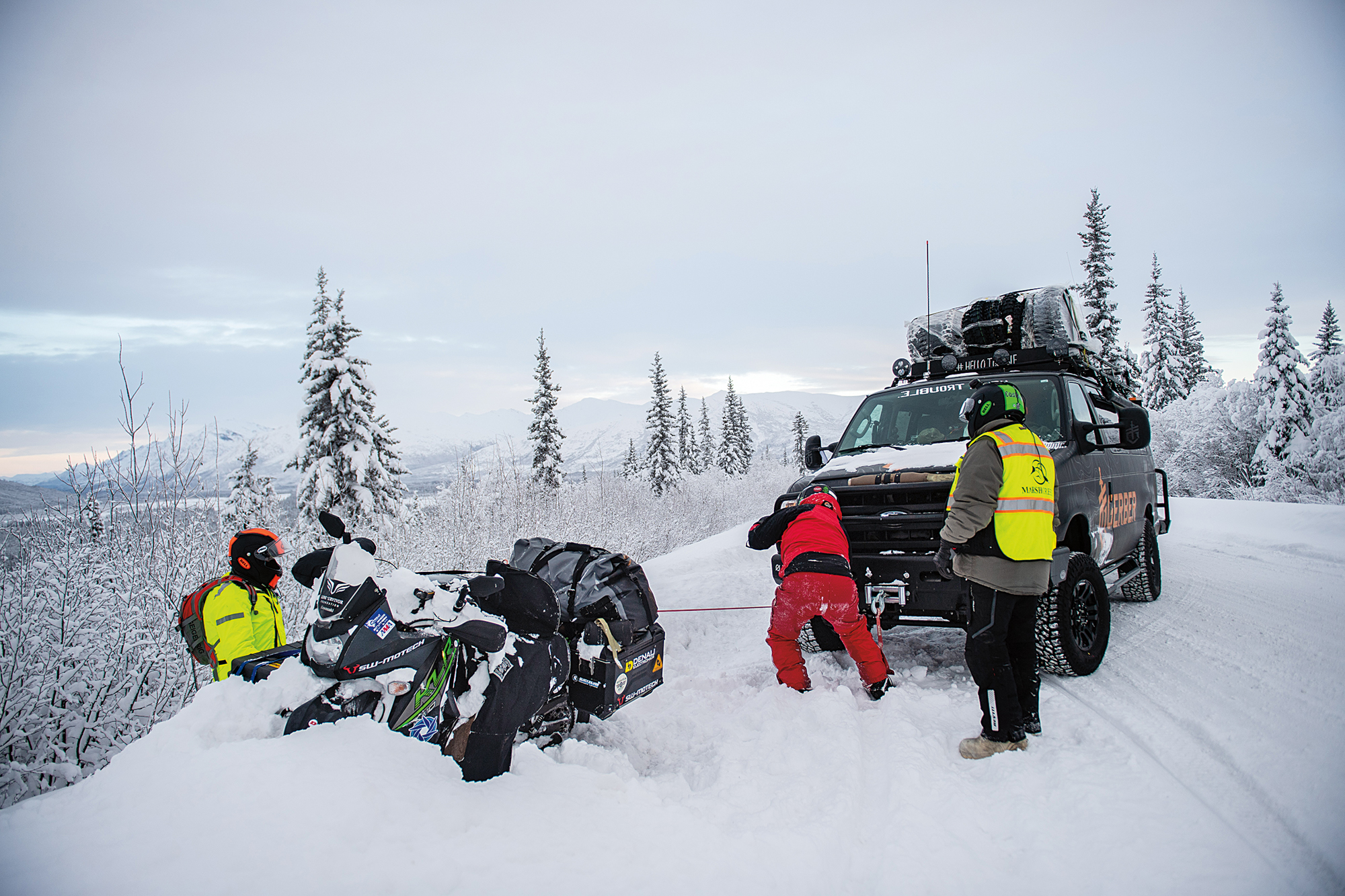 To reach Panama by the start of the dry season, we battled cold weather, wind, and the icy roads of Alaska and Canada for over 2,000 miles. 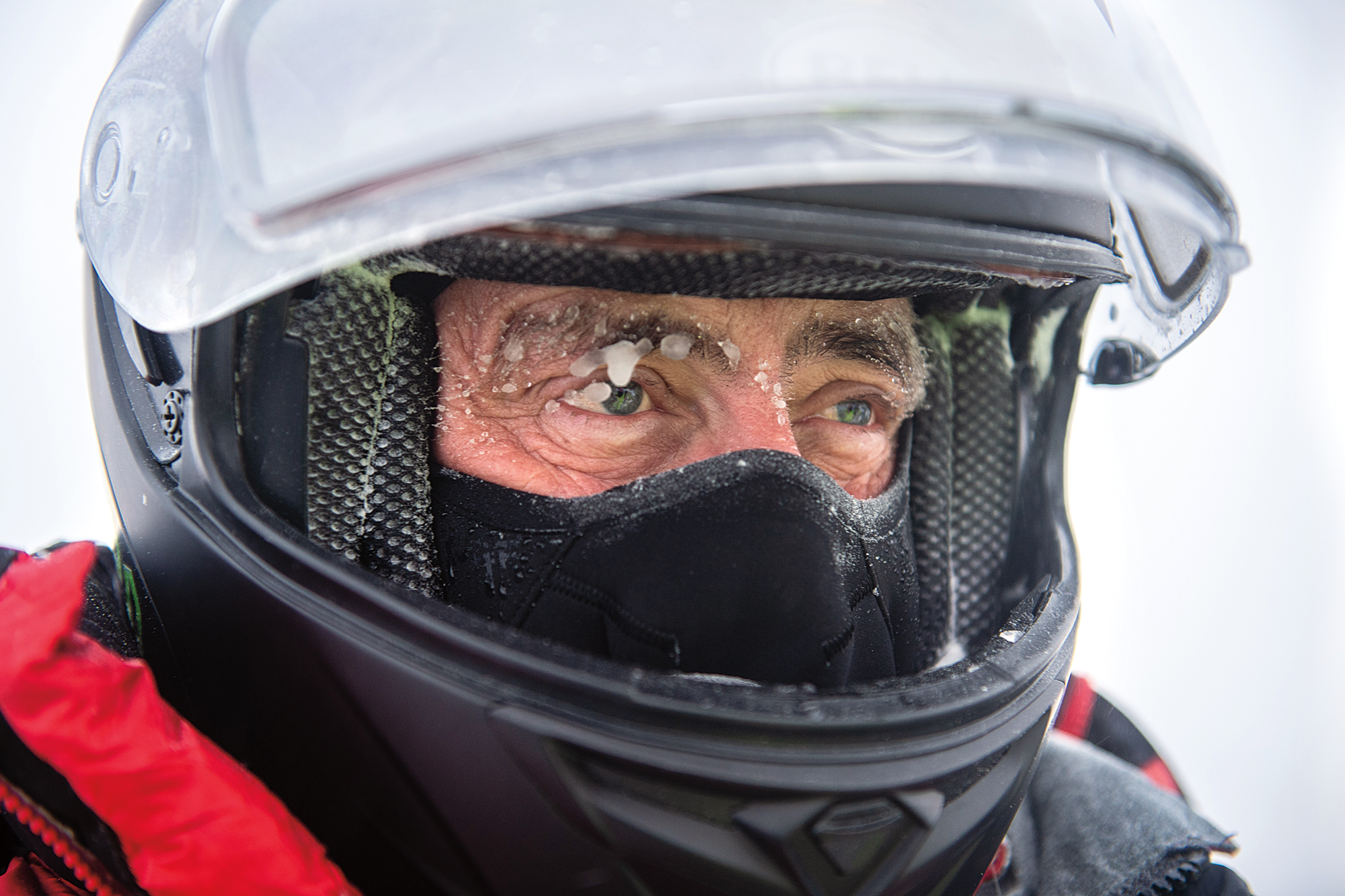 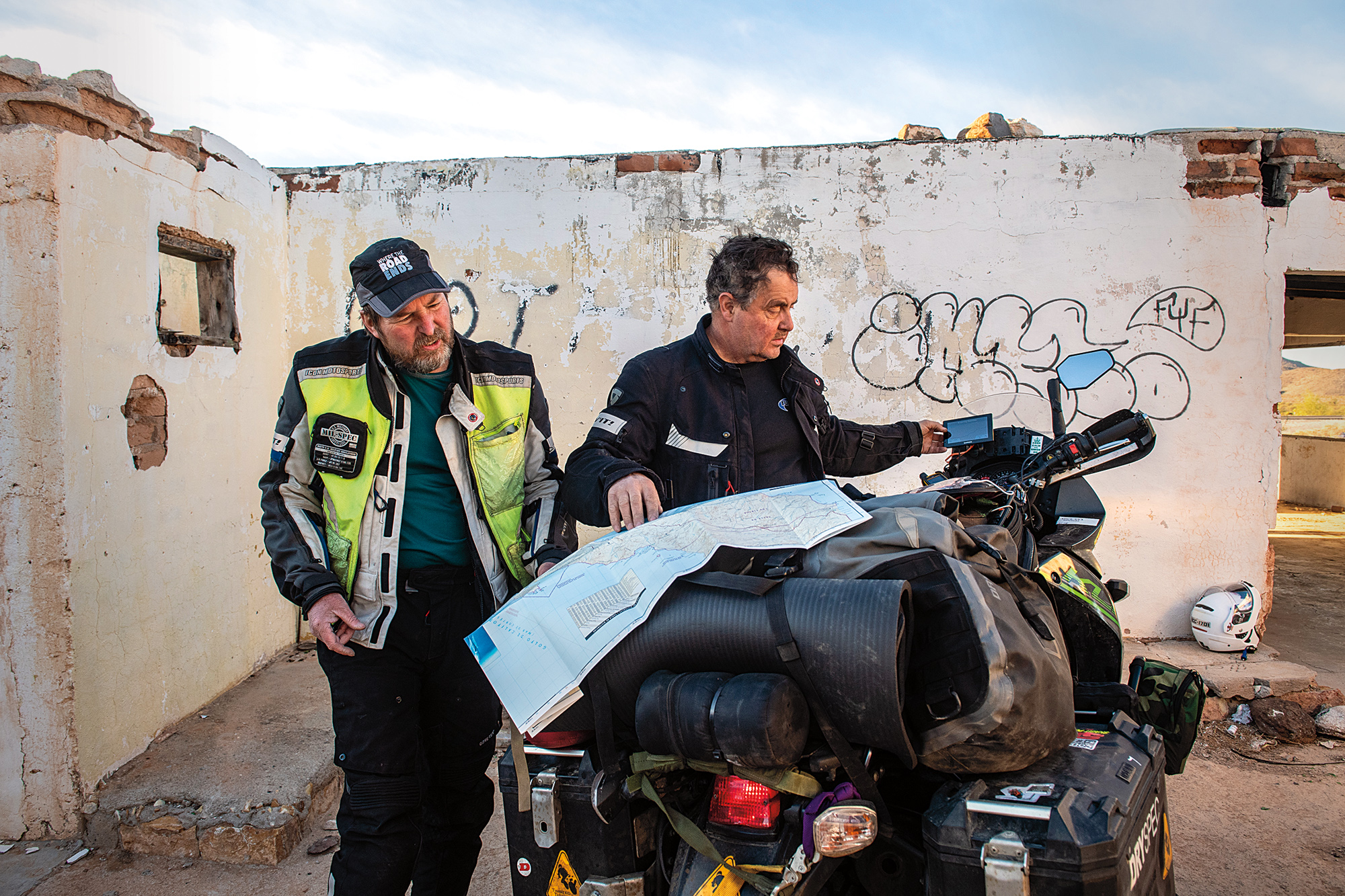 For two weeks, the cold constantly nagged at us, freezing our eyelids closed and creeping into any piece of exposed skin.

Seeking refuge from the Baja winds in an abandoned house, Simon Edwards and rich Doering start the daunting task of planning the next six border crossings. 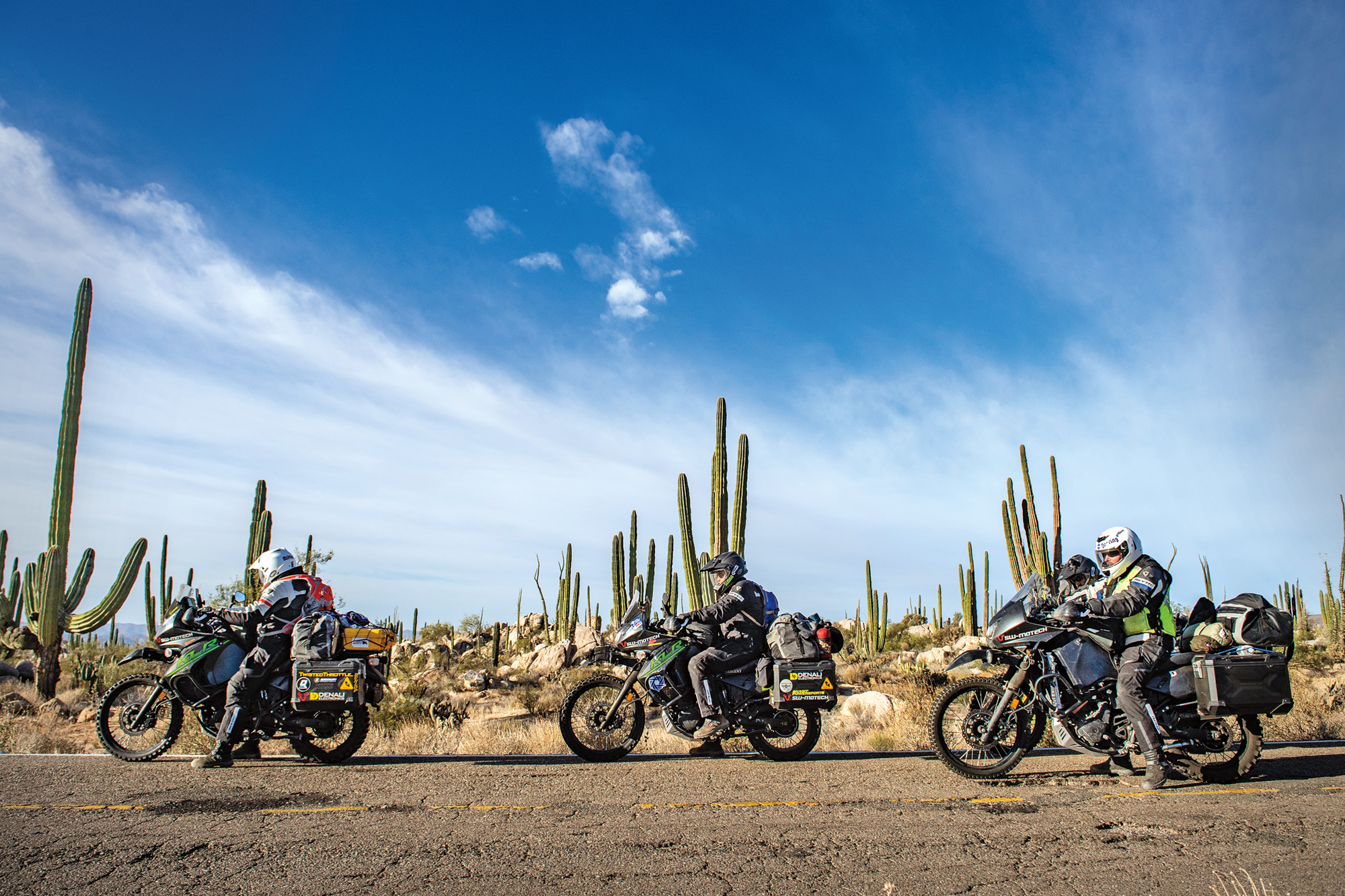 The longer, warmer days of California and Baja were a welcome relief from the cold, wet weather of the pacific northwest—riding became more enjoyable again, and we were able to sleep under the stars. 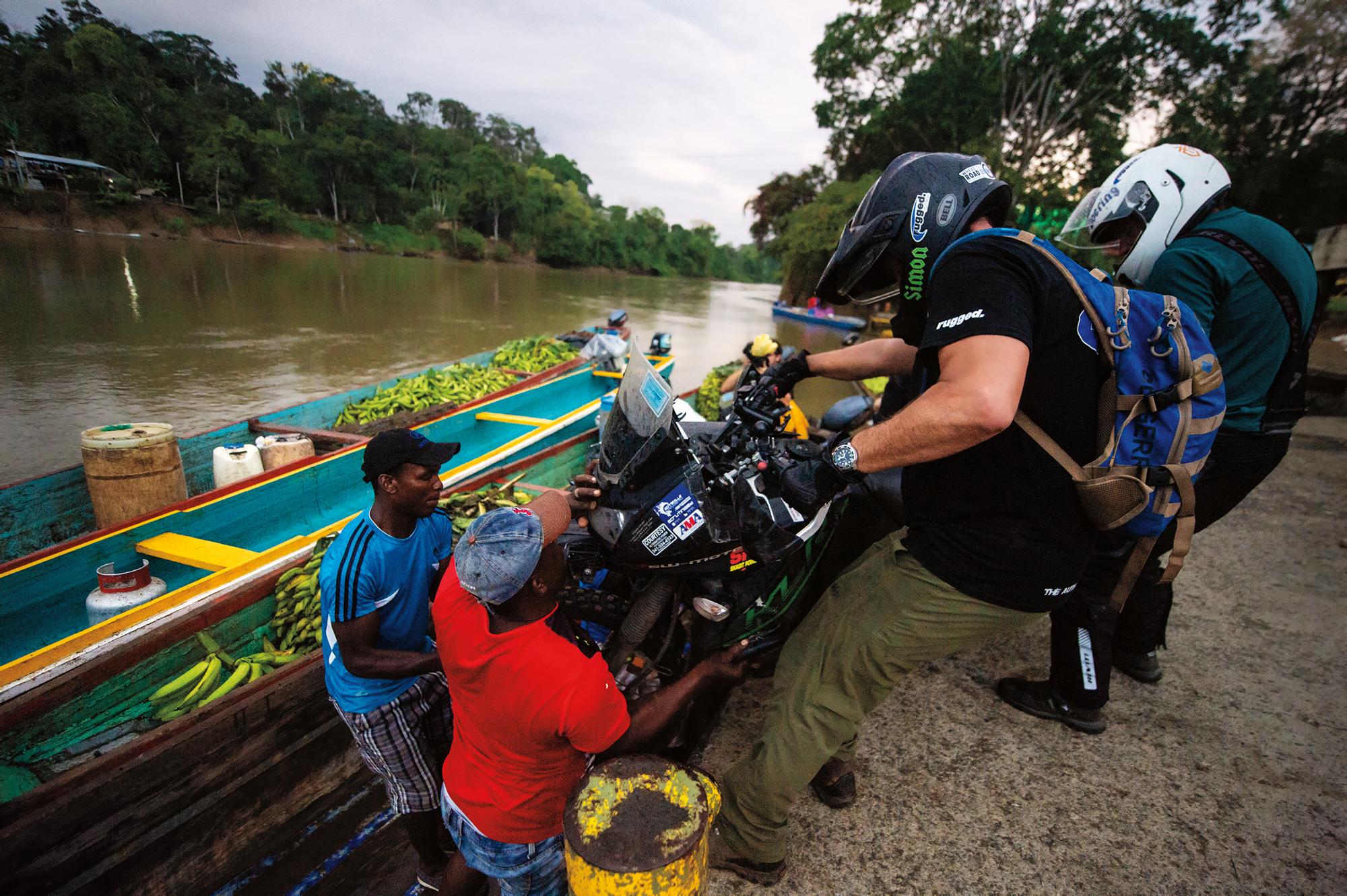 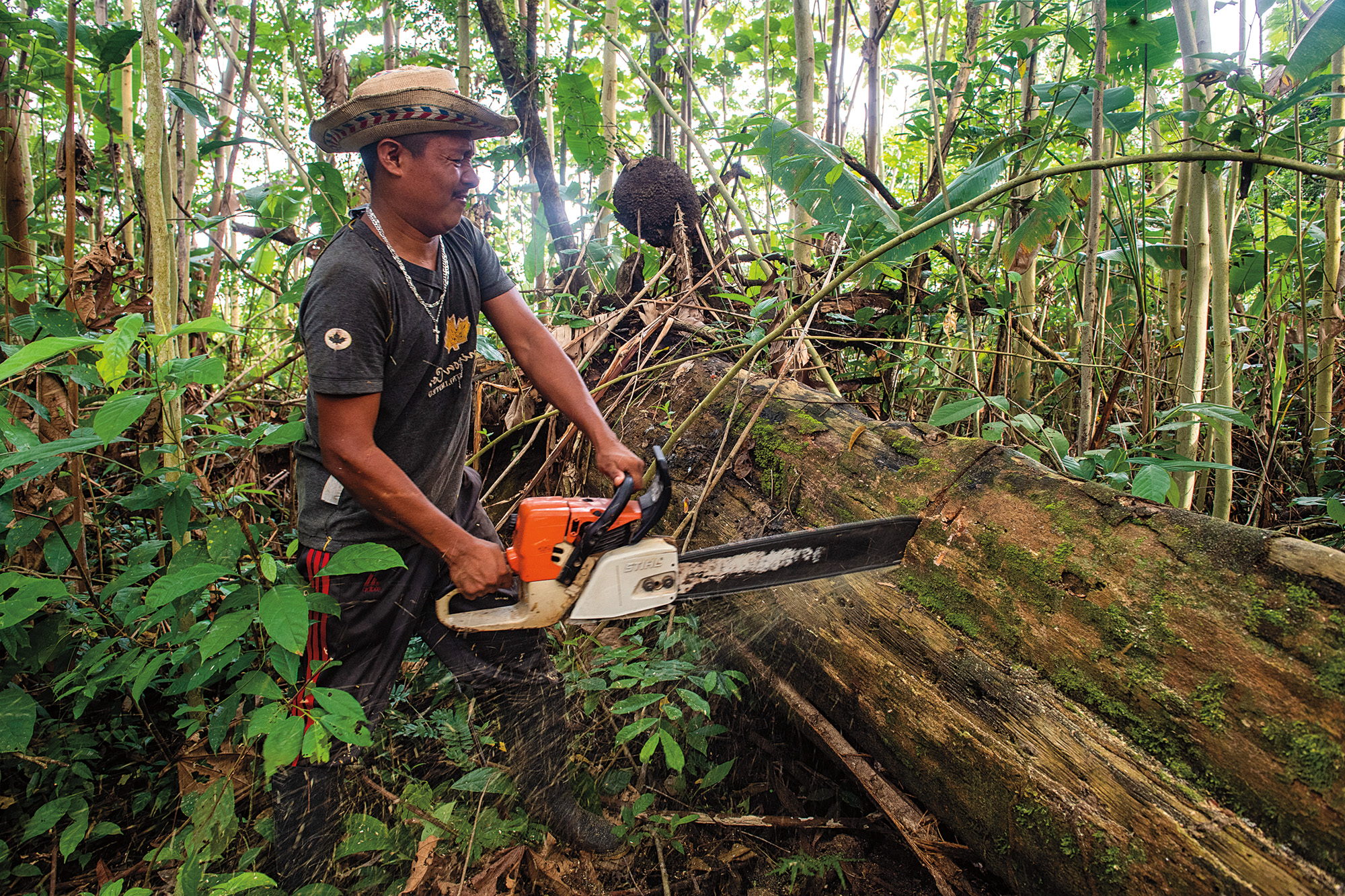 We finally reached Panama on January 10, starting our voyage upriver into the heart of the Darién jungle. unseasonably heavy rains swelled the rivers and washed out the roads and trails. as one team member put it, “after three years of planning and months of worry, we finally get to face the monster.”

Seeming impervious to the heat and humidity, members of the local kuna tribe worked nonstop, helping clear the jungle of vines and fallen trees. 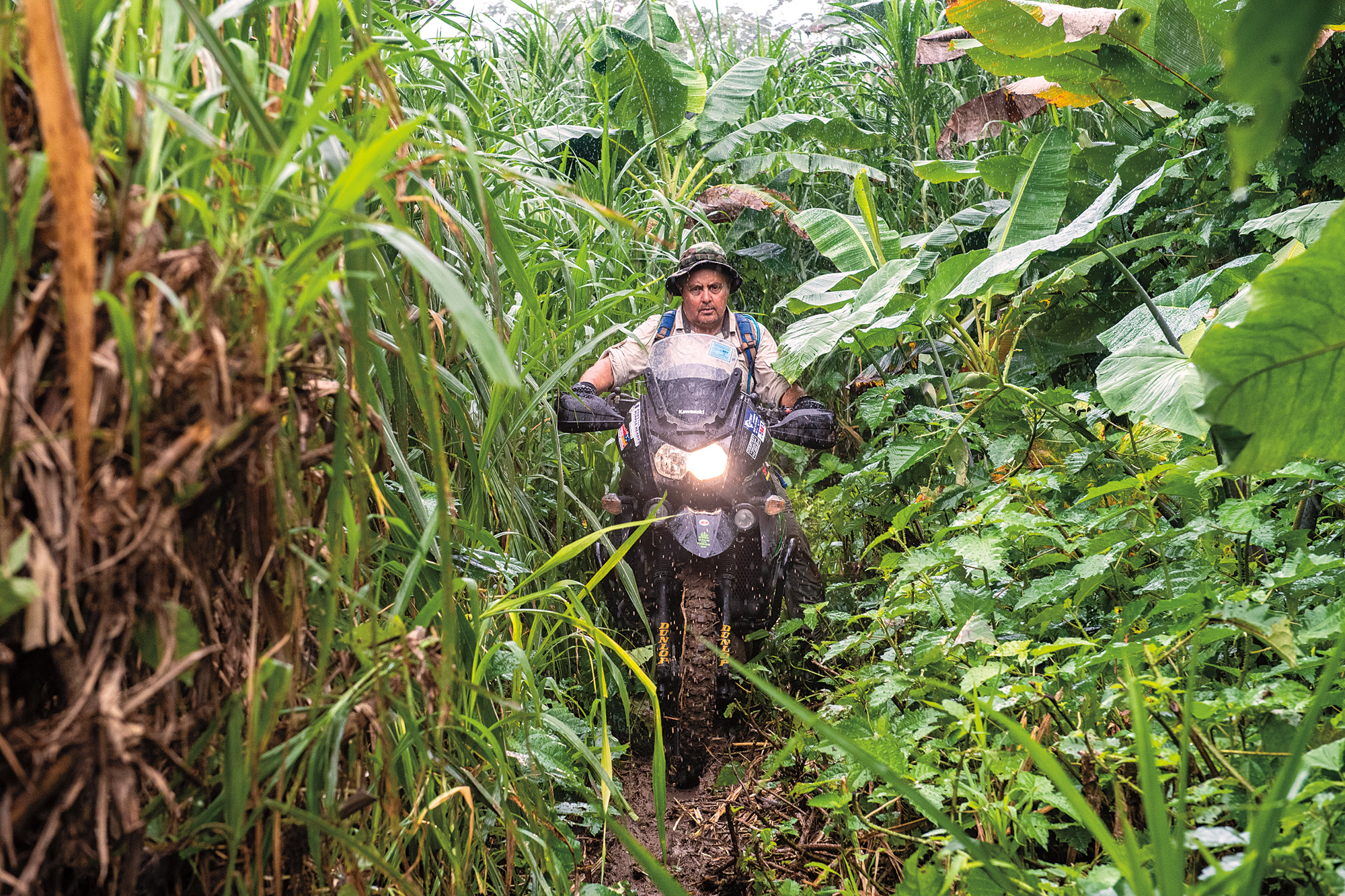 We took turns riding, pushing, and pulling the motorcycles through the dense jungle, frustrated at the slow and tiring progress. 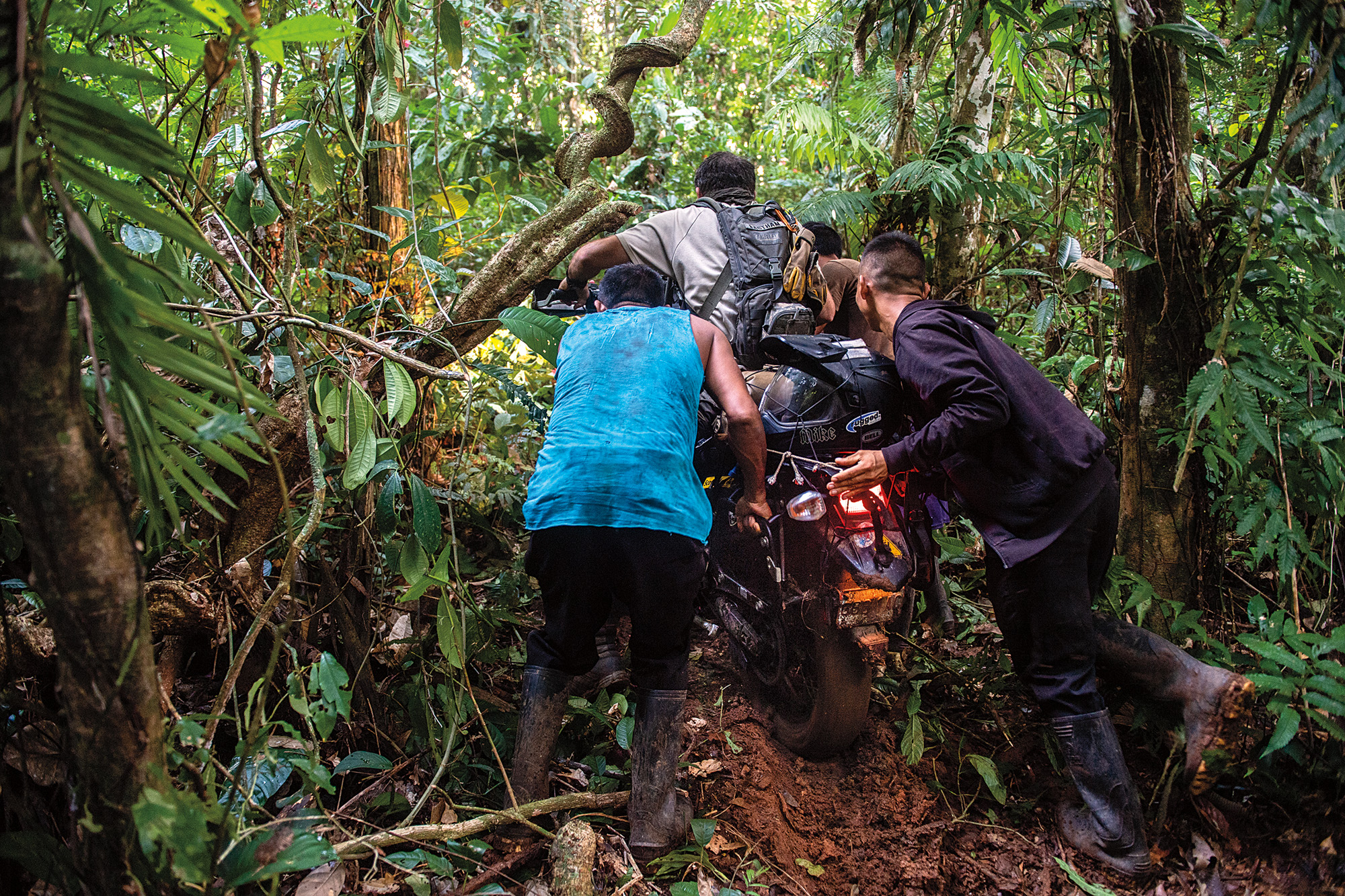 We soon found out that “riding” the heavy adventure bikes through the jungle would be impossible as each bike weighed nearly 600 pounds. vines grabbed at our hands, and roots stopped front tires, causing us to topple over. we found ourselves stopping every 100 feet or so to clean mud, sticks, and vines out of the chain, sprockets, and wheel wells. 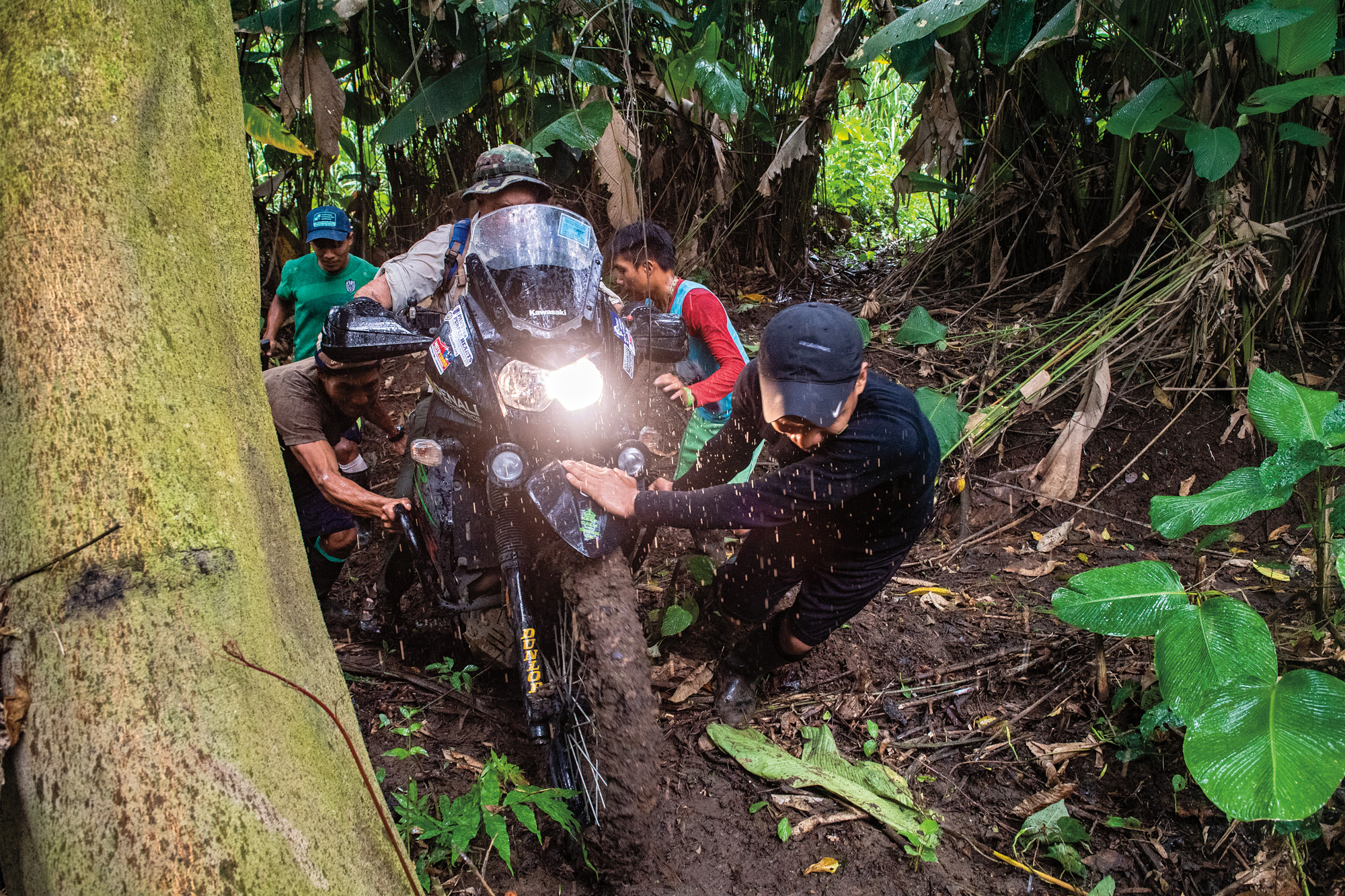 The jungle is a mighty beast. 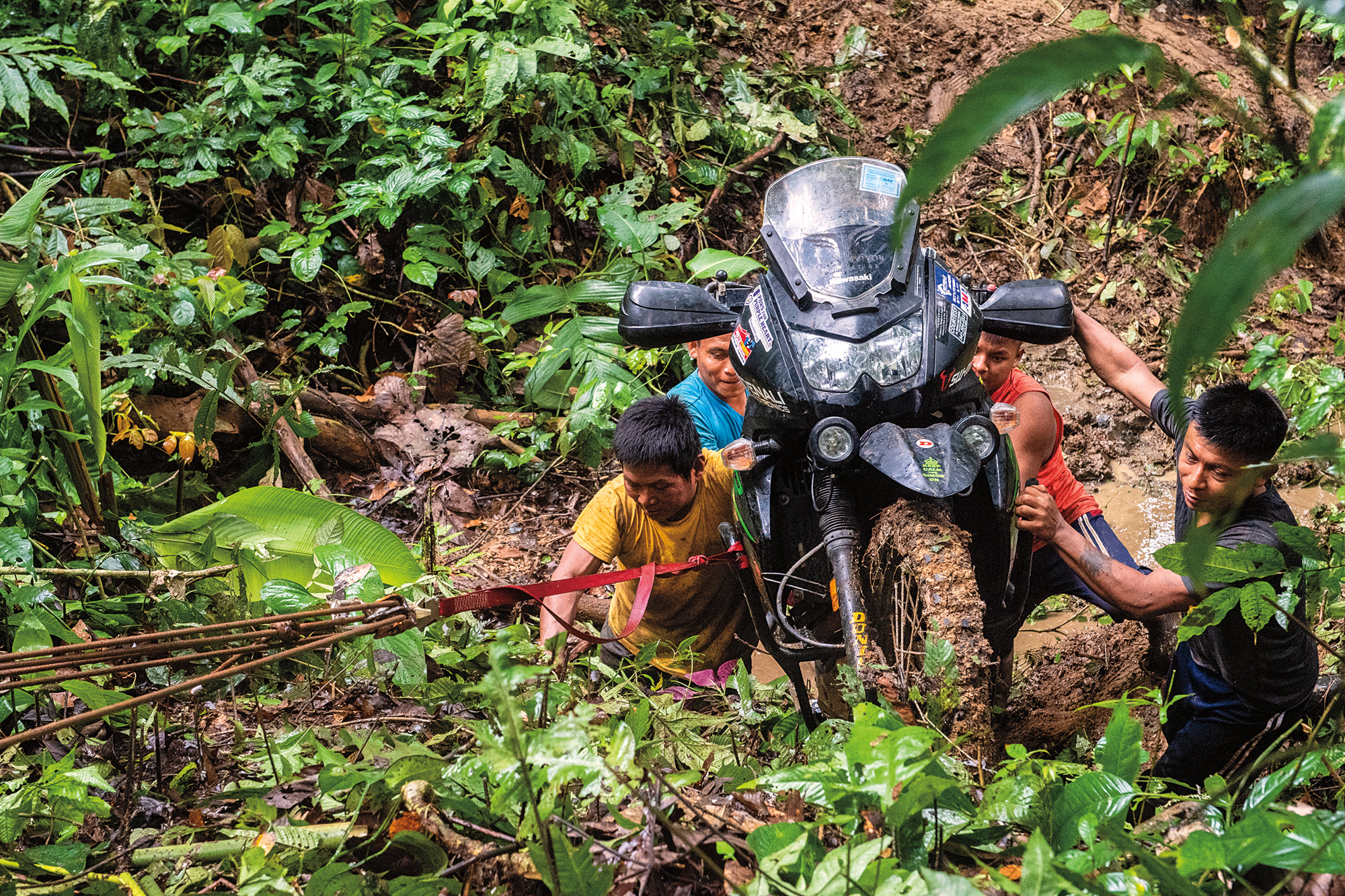 By the end of the second day, the sometimes knee-deep mud had taken its toll on the bikes. one bike was abandoned in the jungle, and two more had burned out clutches. 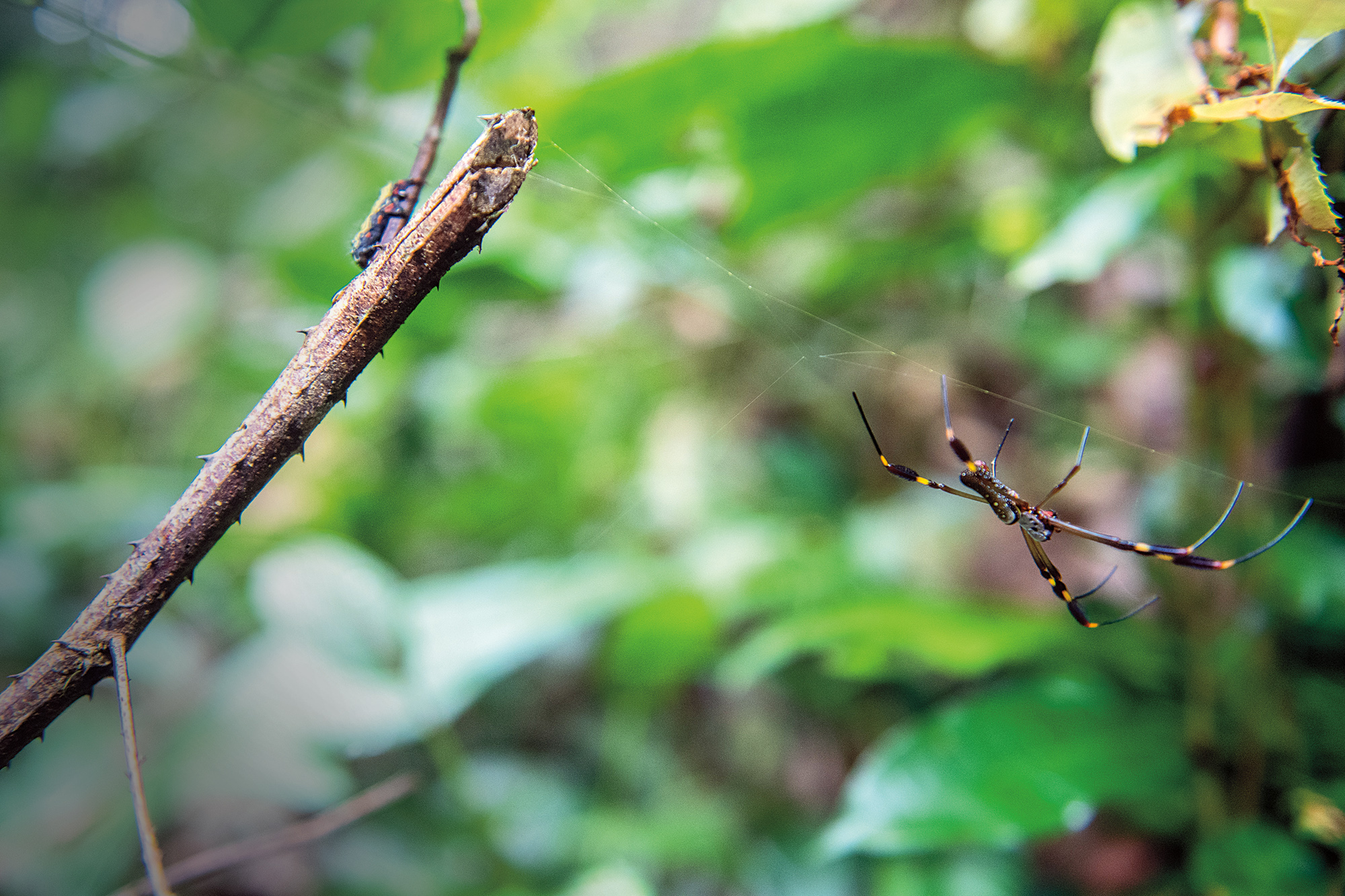 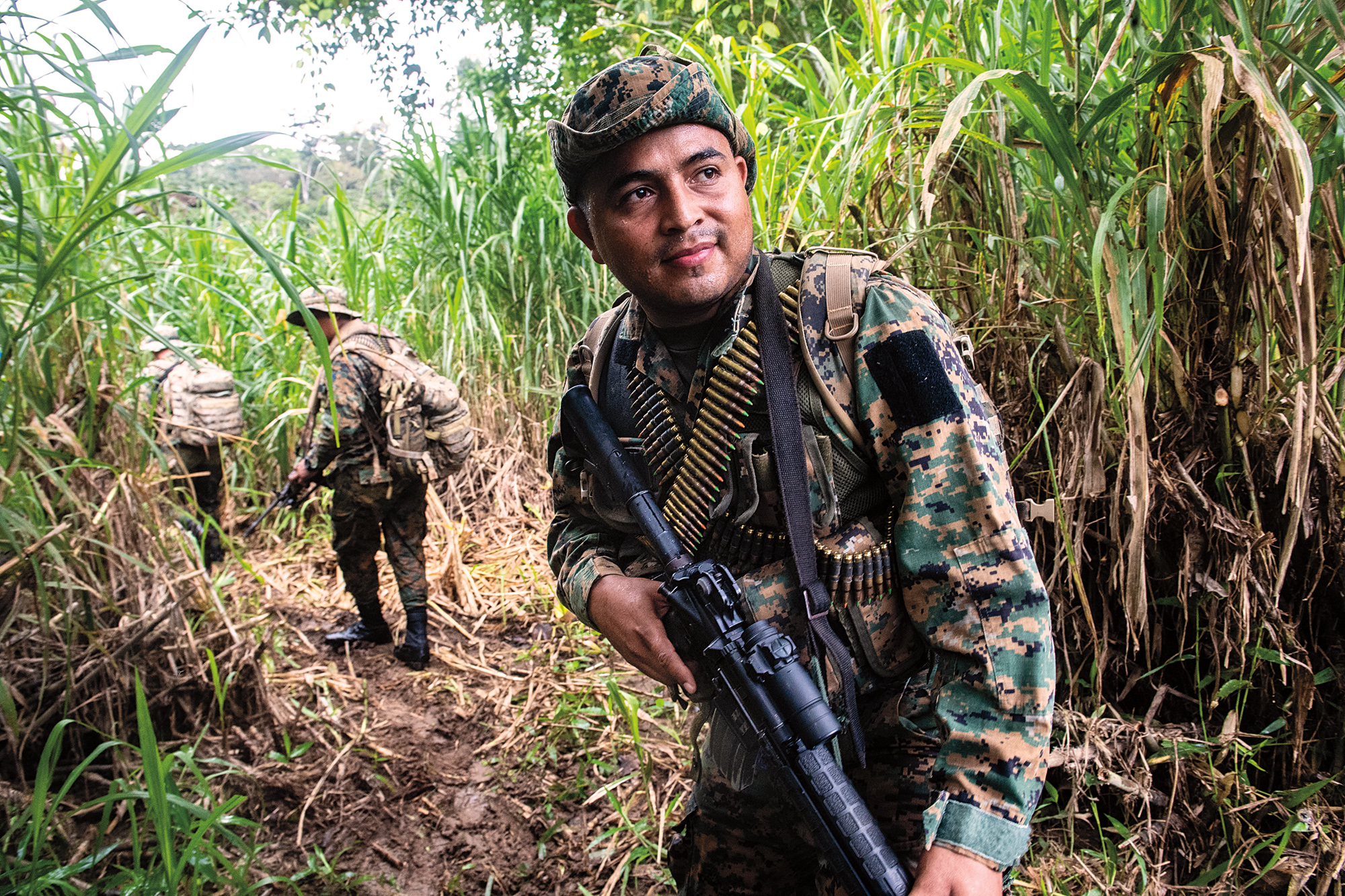 The presence of the Panamanian border patrol only reminded us of the constant threat of running into drug smugglers or human traffickers. 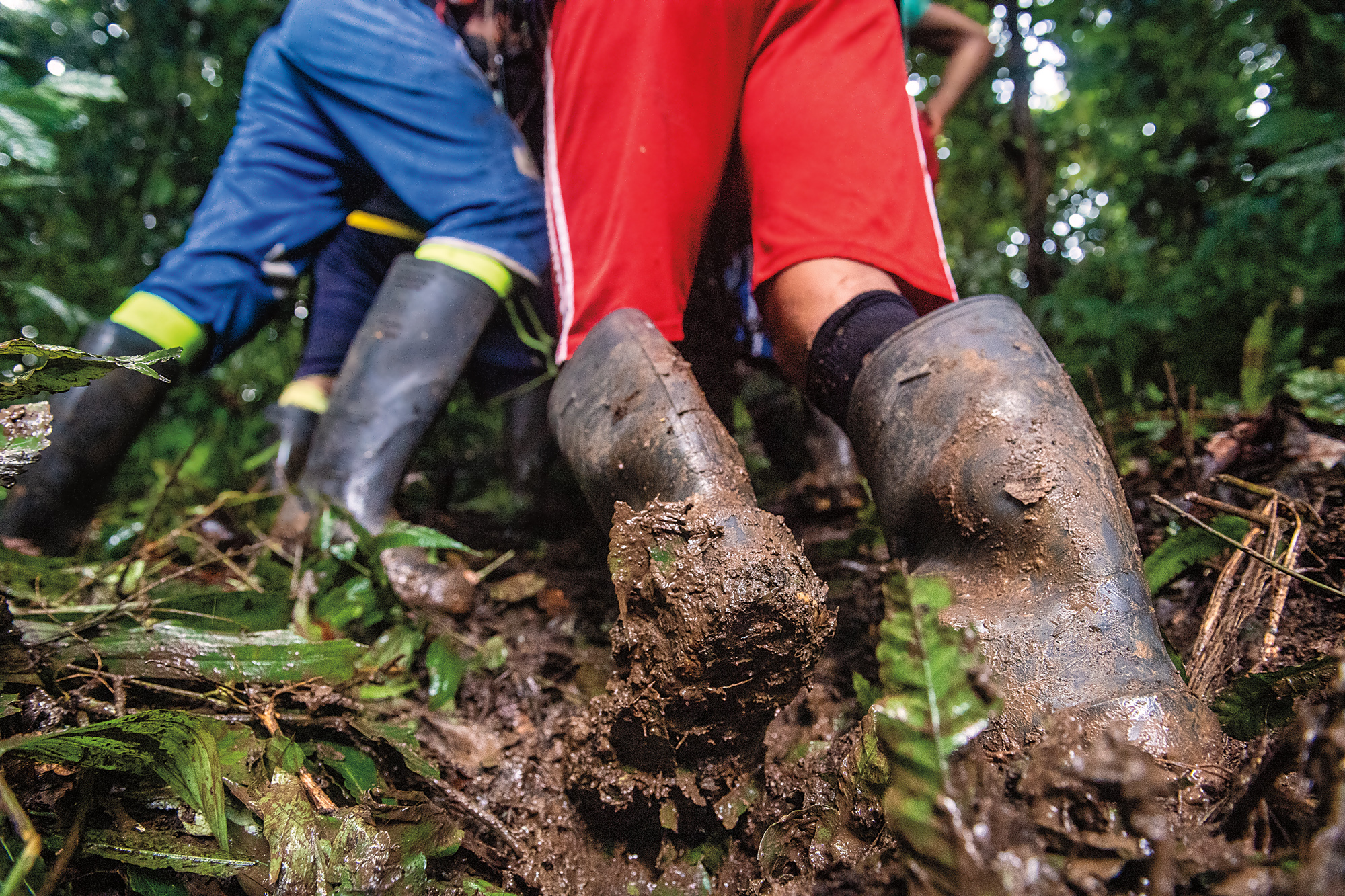 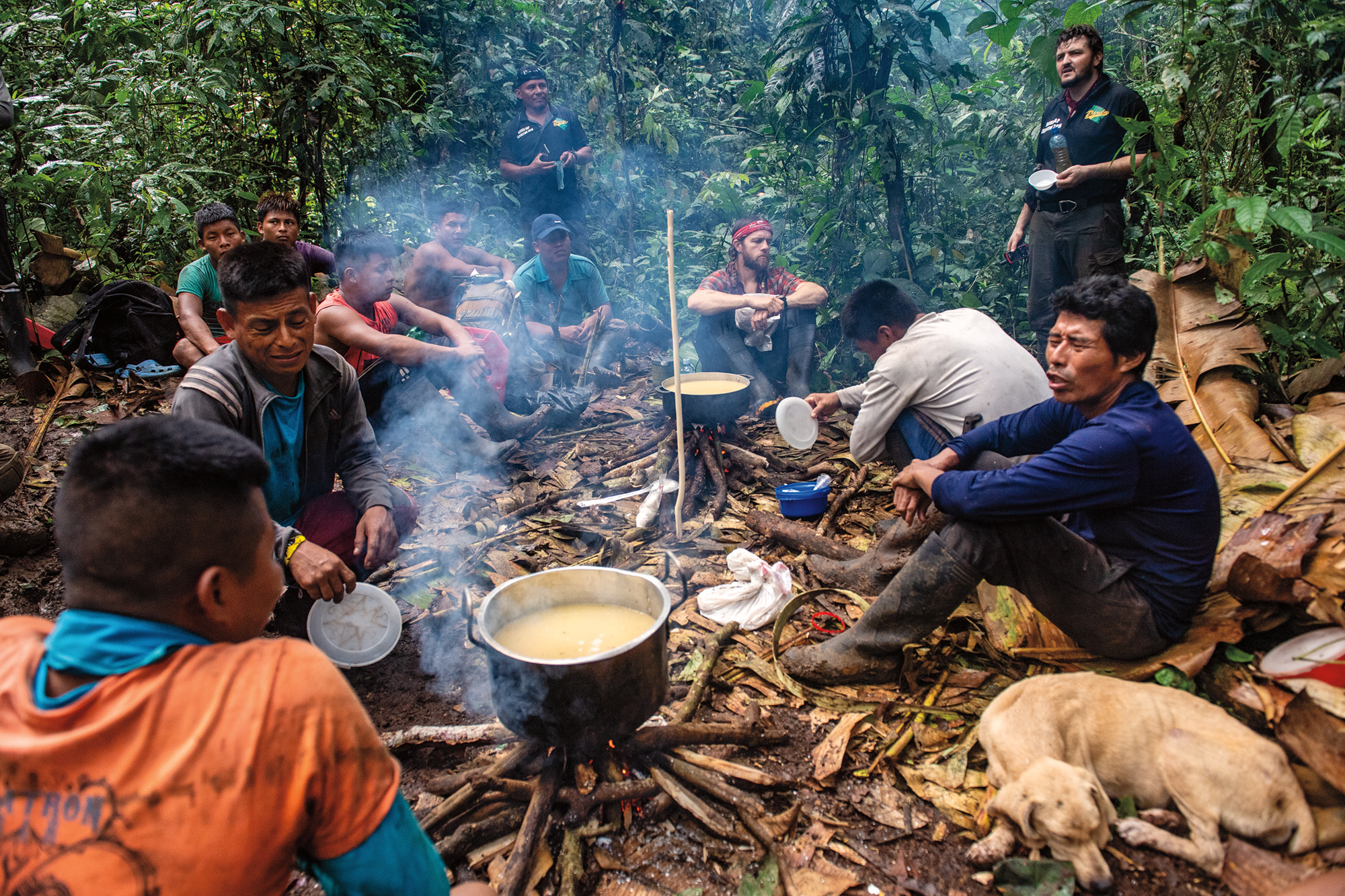 After an exhaustive day of pulling the bikes by ropes and pulleys, having moved forward only a few miles in two days, we made camp and weighed our options.

After a day in the jungle, mud-coated everything. with each step our boots became heavier. the mud sapped our energy, slowly destroying our equipment, eating away at our morale. 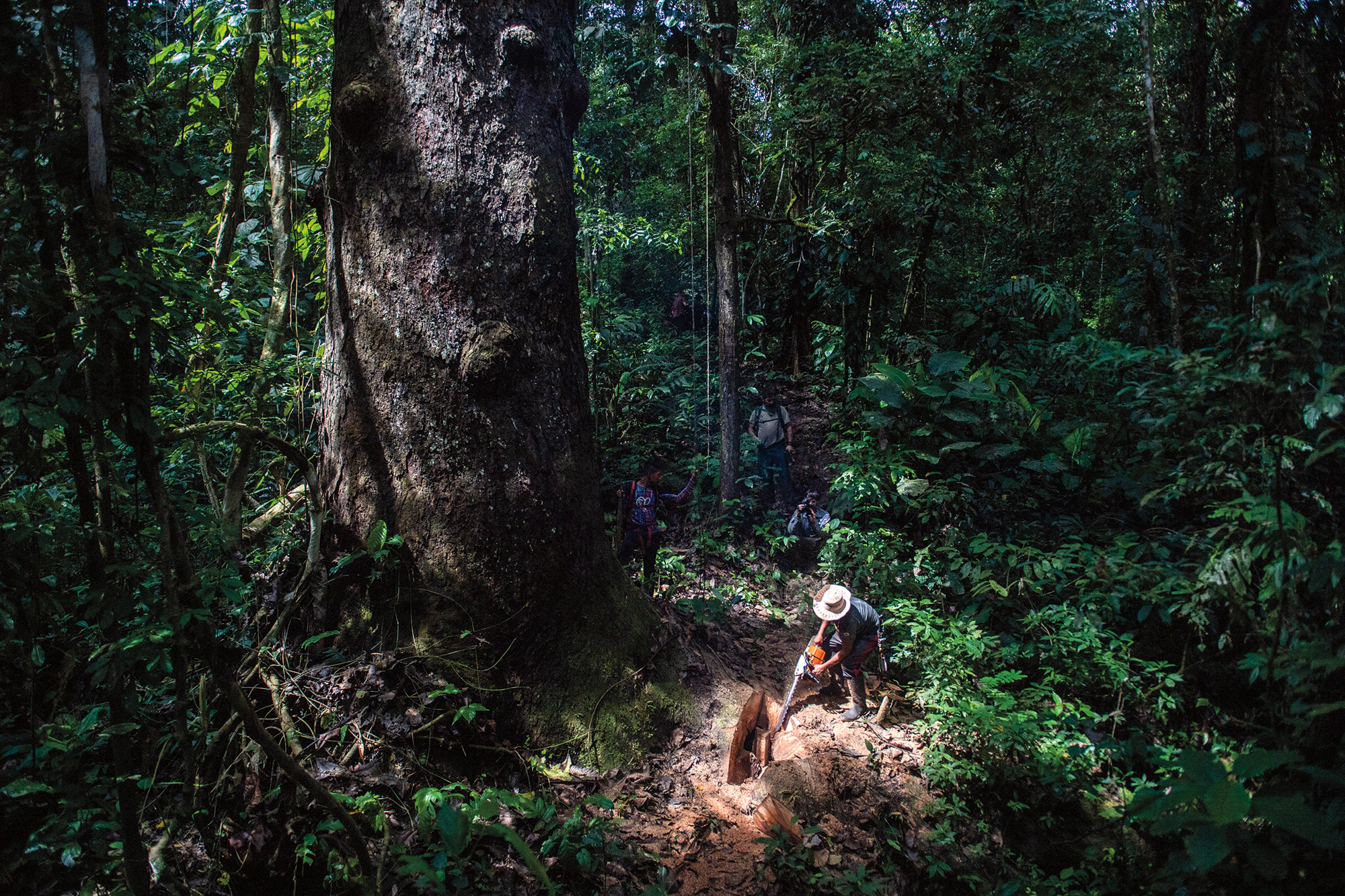 The chainsaws went ahead of us and their distant hum would occasionally break the silence. outside of the groans and shouts of the men working on moving the motorcycles, the jungle became an eerily lonely place. if you fell behind only a few hundred yards, you suddenly felt very much alone in the vast green foliage. 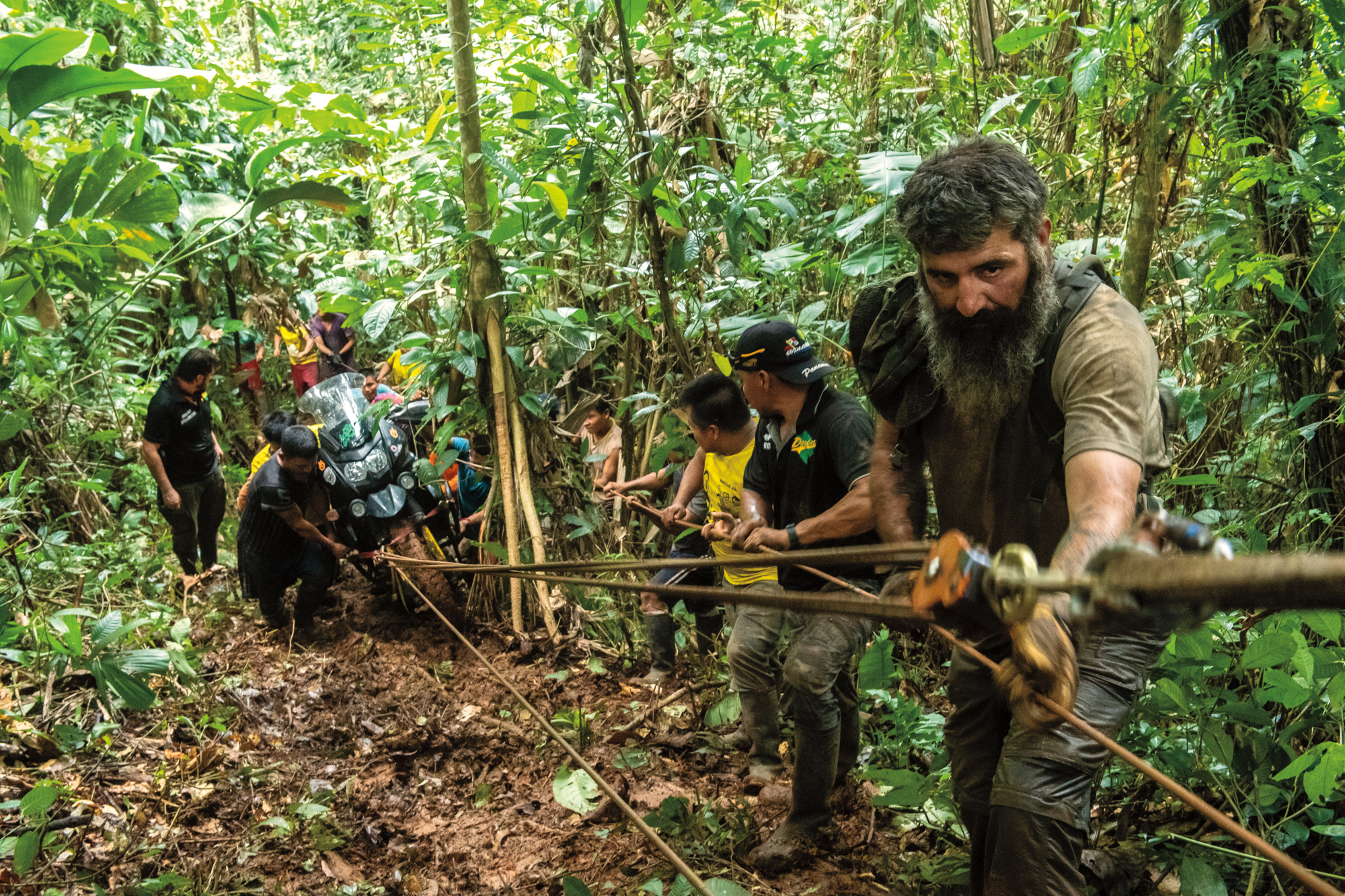 With most of the bikes’ clutches burned out and disabled from riding in the deep mud, we resolved to continue on. using ropes and a four-in-one pulley system, we moved forward a few feet at a time. 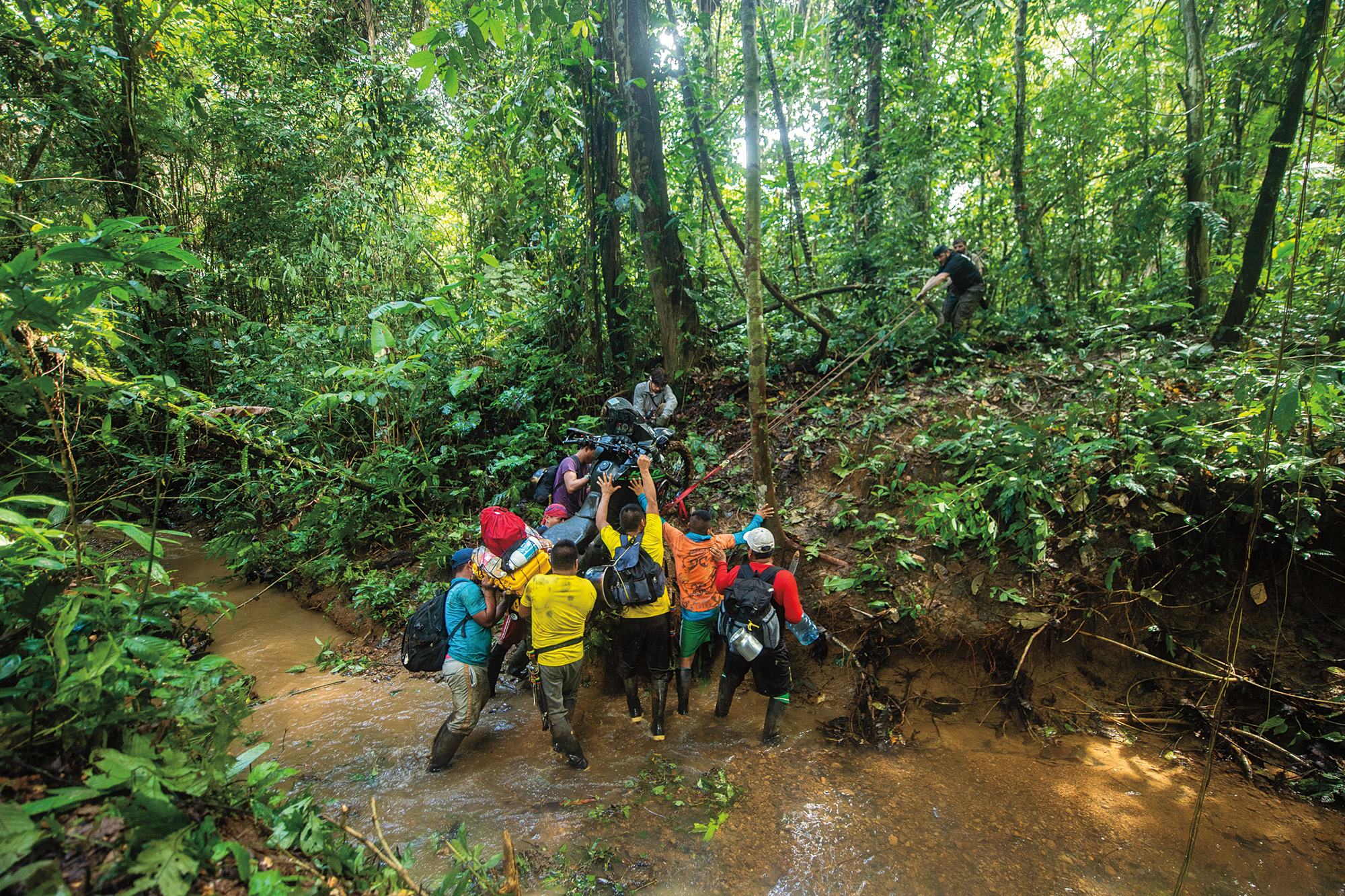 After reaching the border of Panama and Colombia, we were joined by members of the Wounaan tribe from the Colombian village of Cristales. with renewed spirits and additional manpower, we made up some lost time. 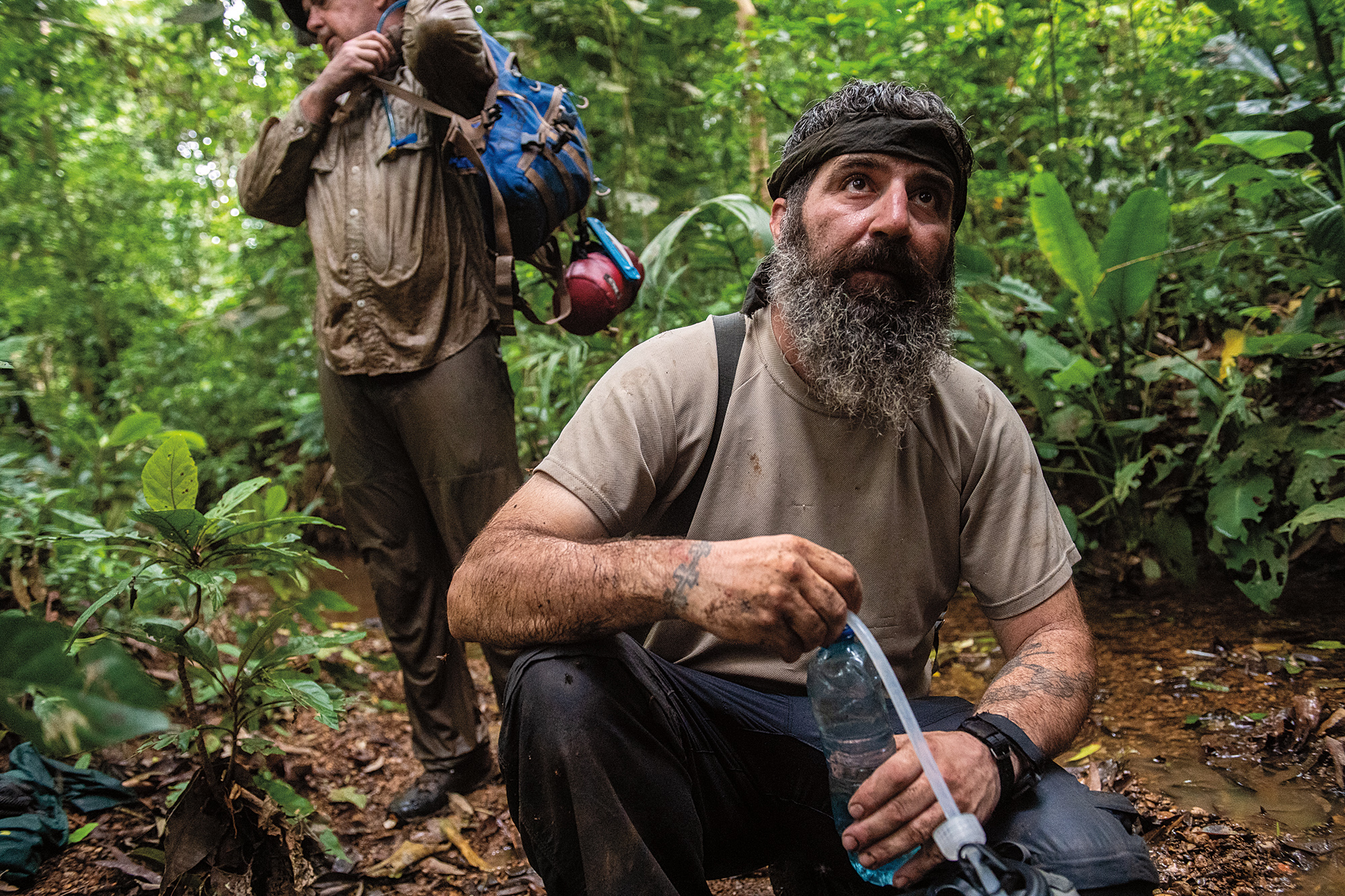 Dense jungle, black palm thorn, heat, and humidity began to wear down the team as we approached being five days in the jungle. 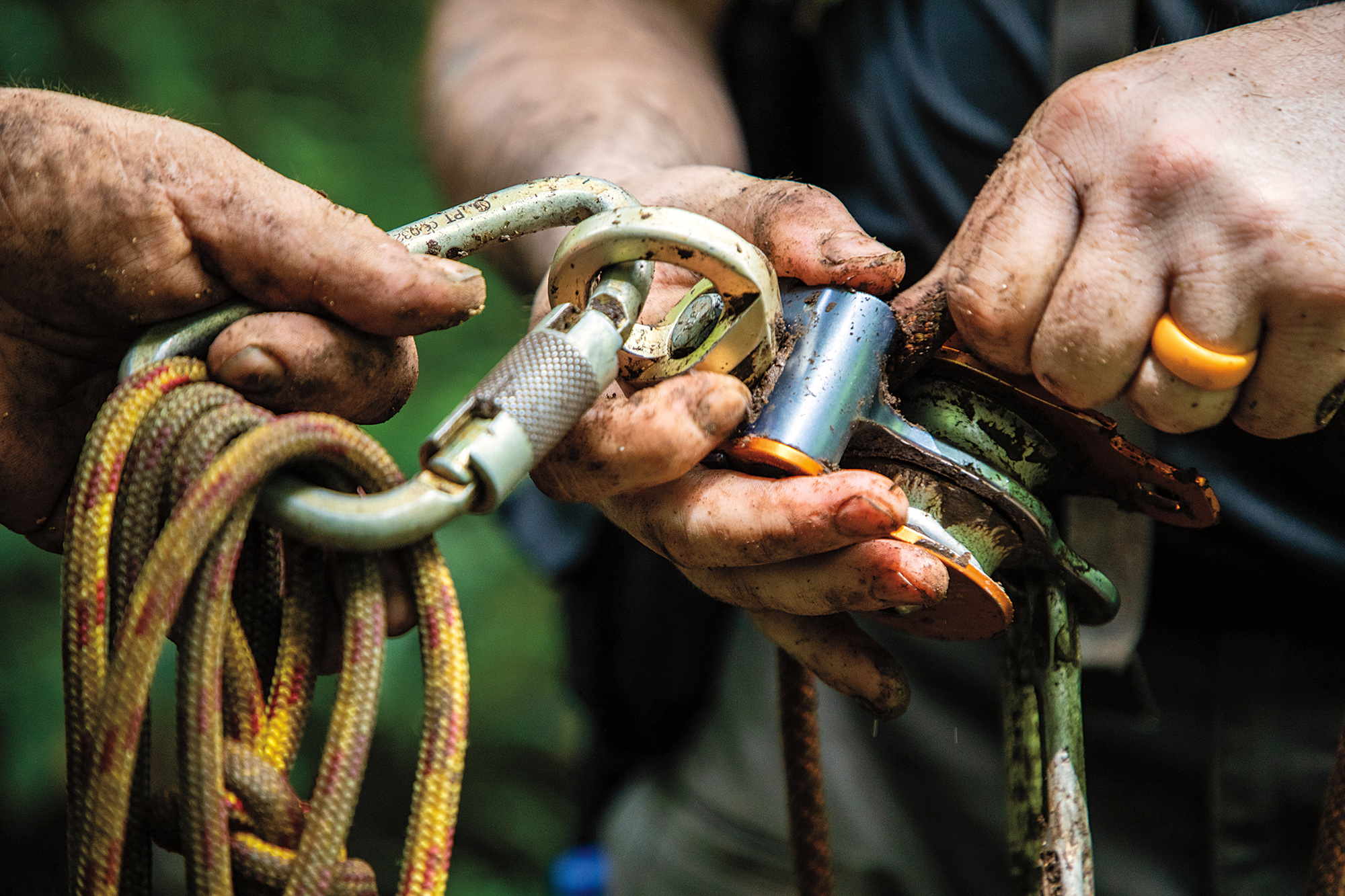 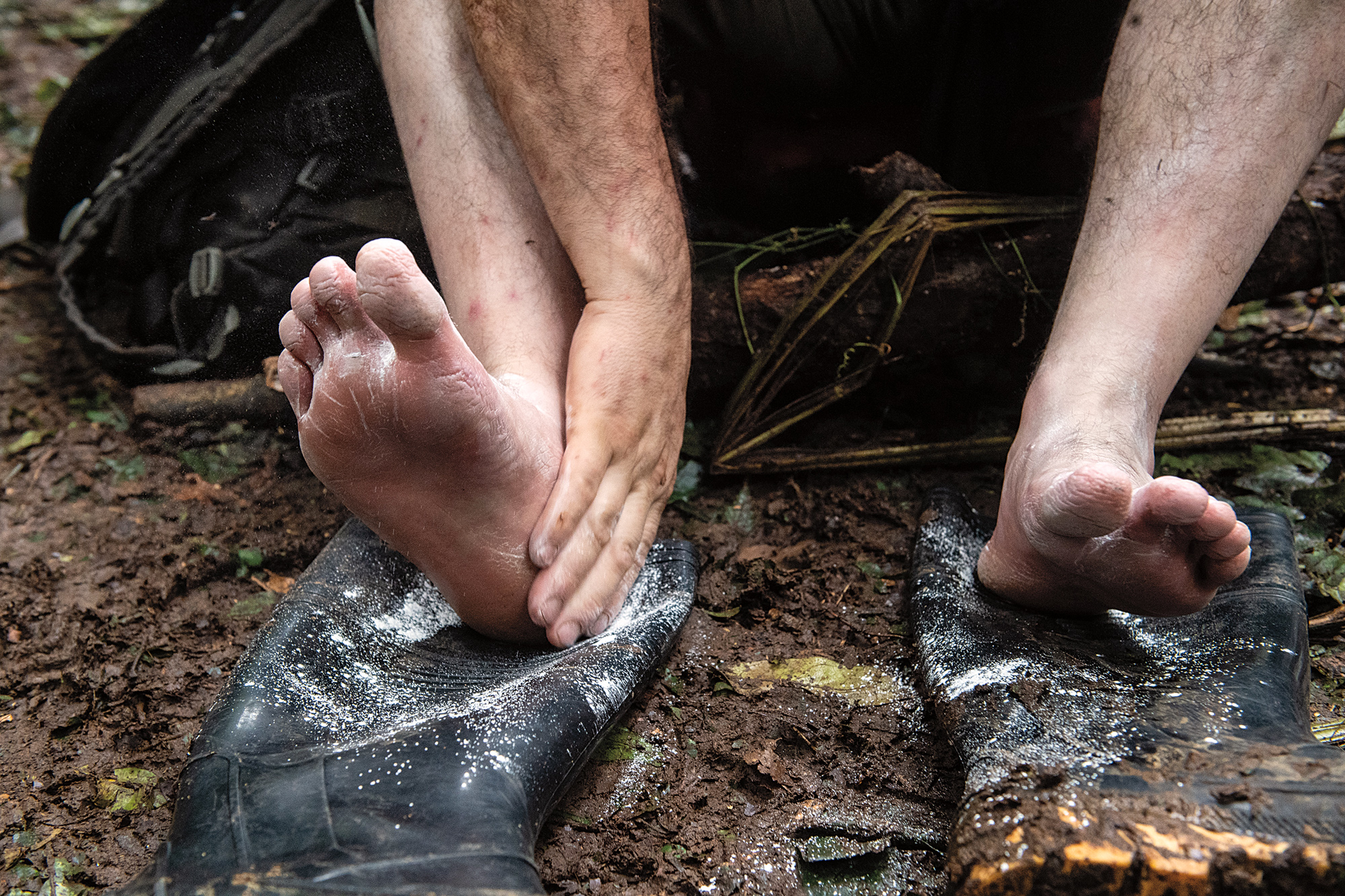 Teamwork became essential to our survival.

Blisters, bites, and trench foot made every step a painful reminder of our bad choices and lack of preparation. 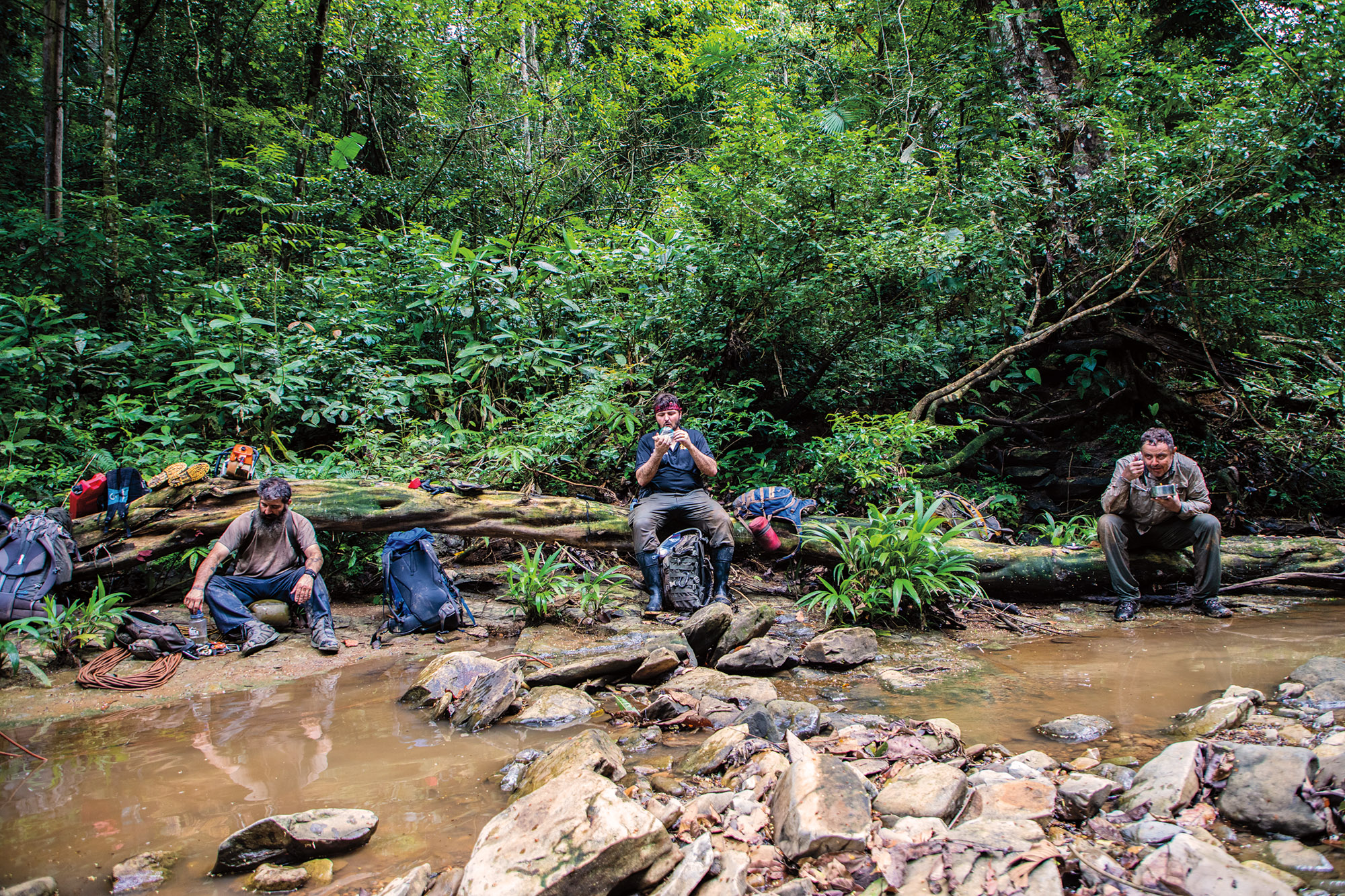 Each river brought welcome relief to rest and eat lunch, wash the mud off our clothes, and cool off. 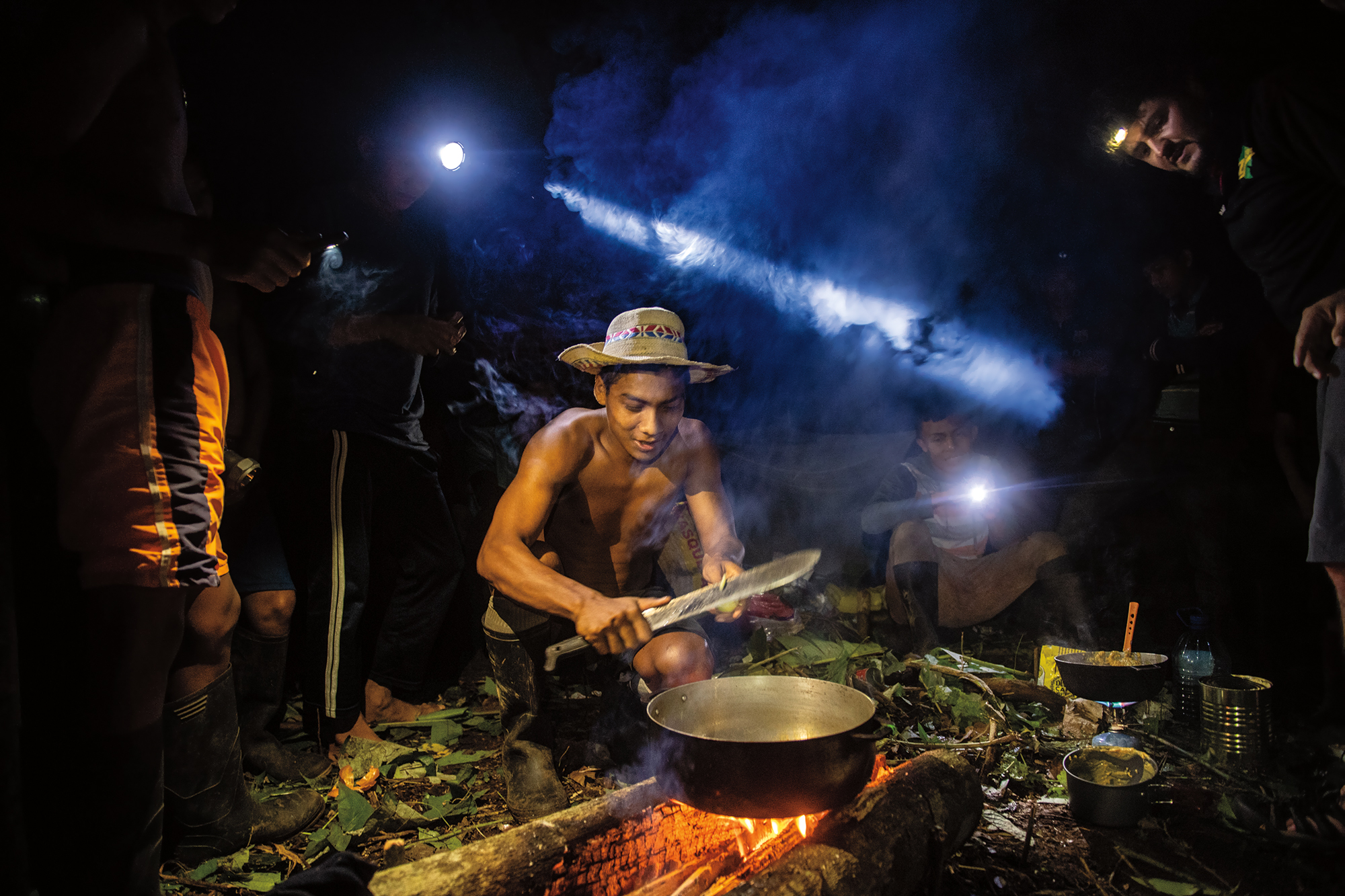 One of our Kuna friends cooked up starch-heavy plantains and rice for dinner and the next day’s breakfast. every other day we delighted in adding a can of spam into the mix, a luxurious indulgence after a long day of work and sweat. 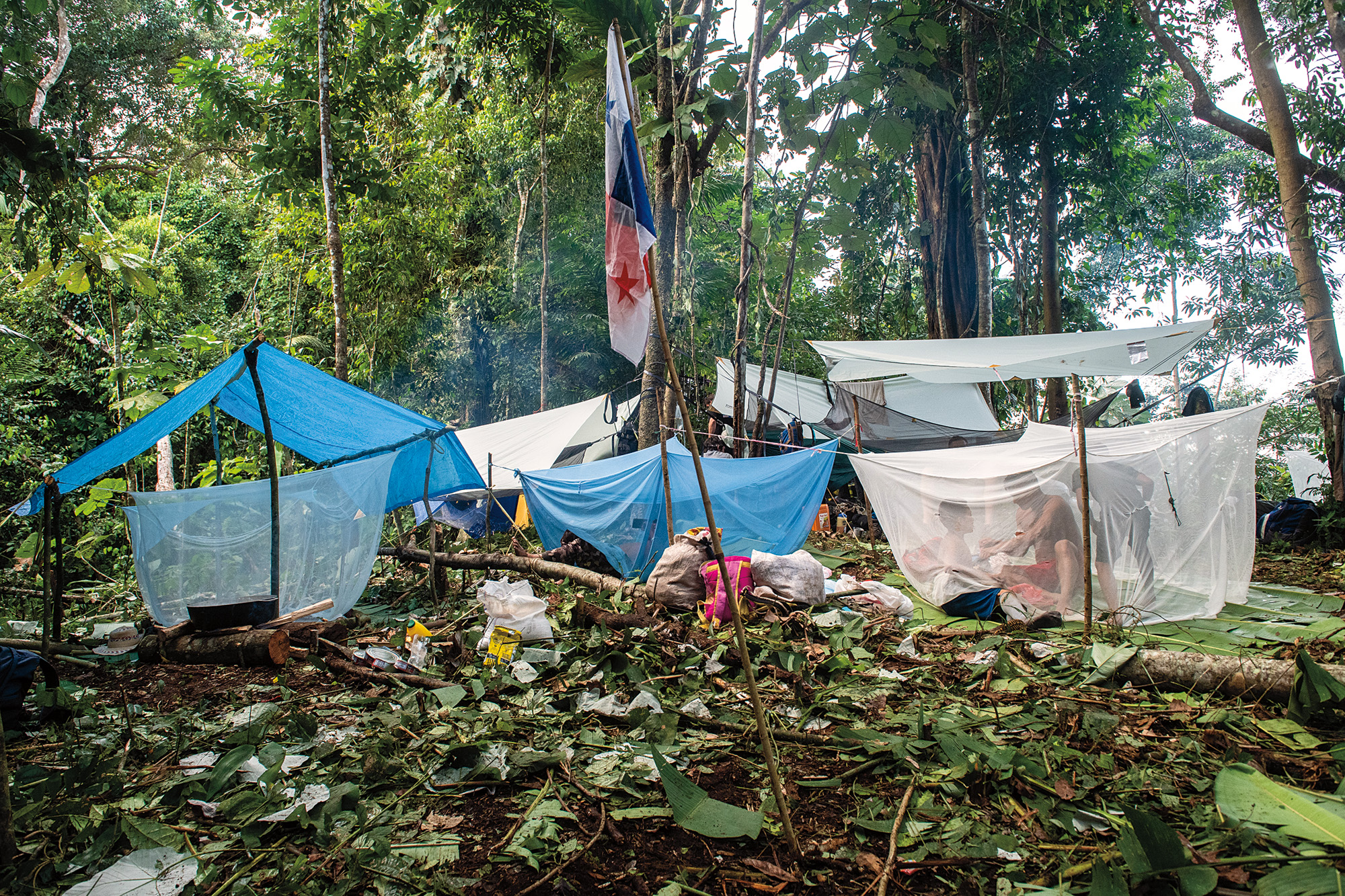 Each night we carved a campsite out of the jungle, chasing out the spiders, snakes, and scorpions. 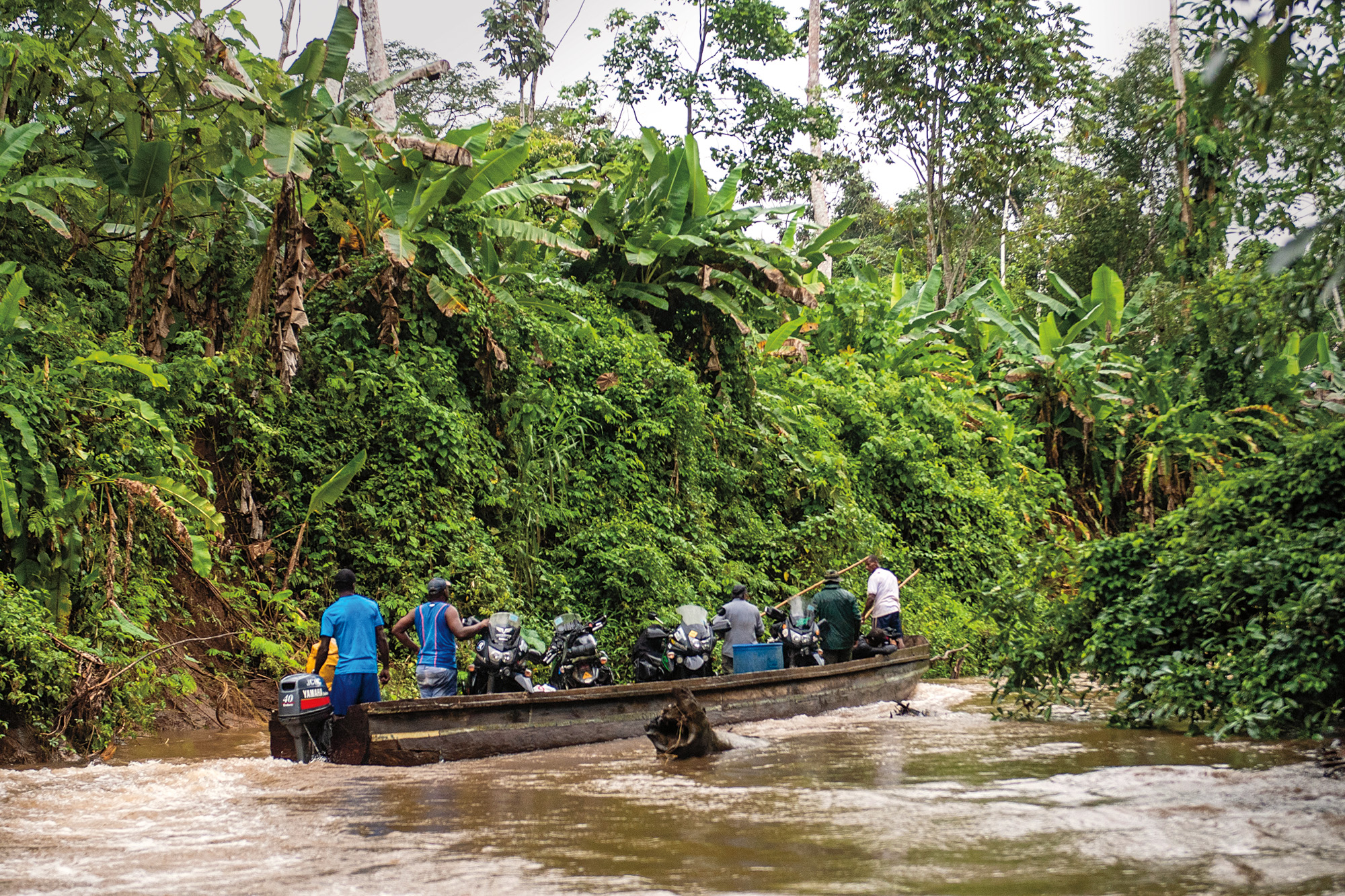 the river braided out before we encountered 4- or 5-inch deep water. unloading, we teamed up to push and pull the boats and bikes by hand through the water, careful to avoid the freshwater stingrays and snakes. 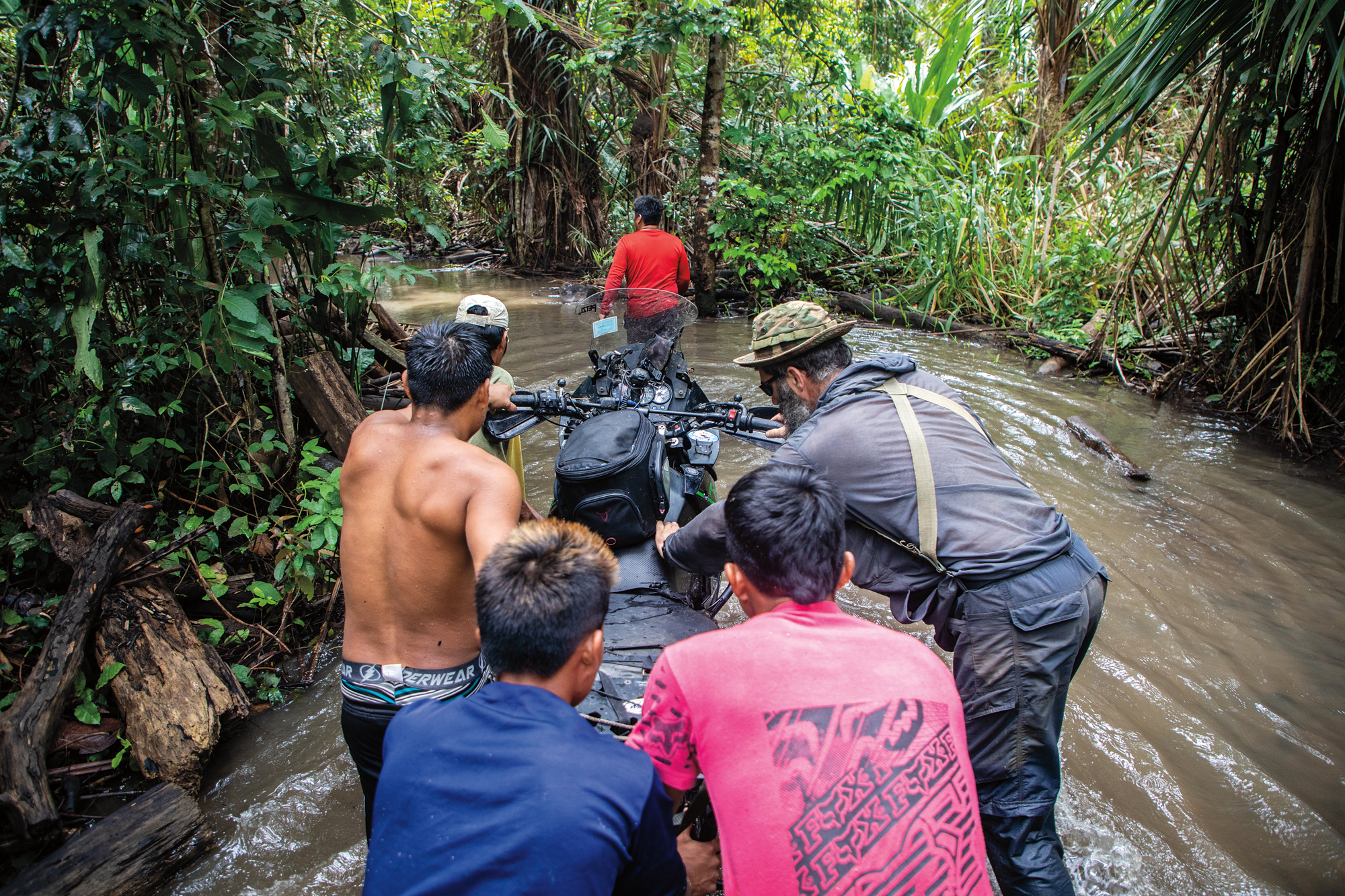 Our joy in reaching the Colombian river systems that would feed into the larger Atrato river was shortlived. we had only an hour of boat travel before encountering our last major obstacle in the darién, the Atrato swamp. 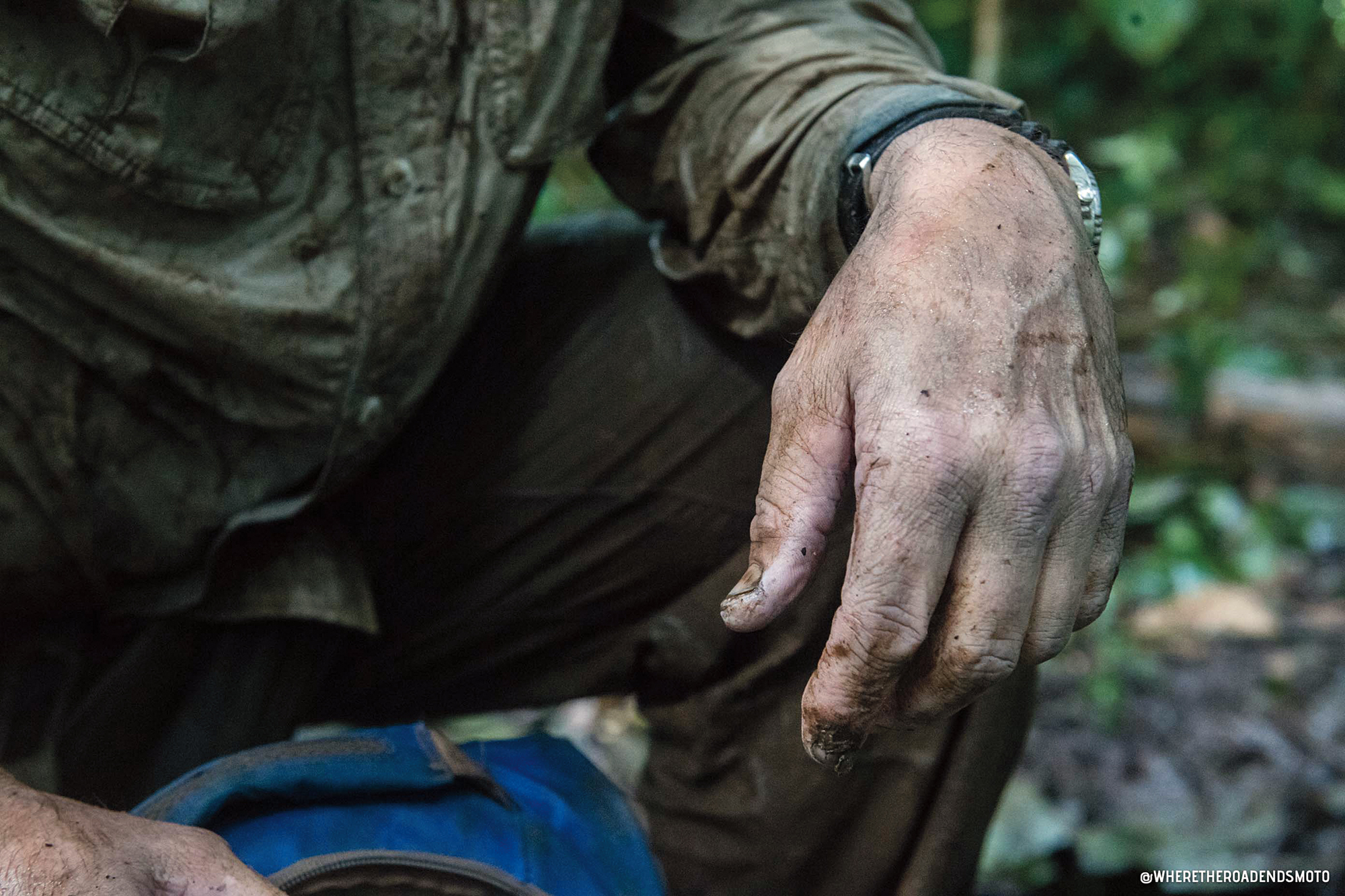 Each bend in the swamp meant digging out mud, clearing fallen trees, and dragging the heavy piraguas (dug-out boats) sometimes on our hands and knees, inch by inch down the river. so close to the open river, the jungle felt like it was making its last attempt at stopping us. 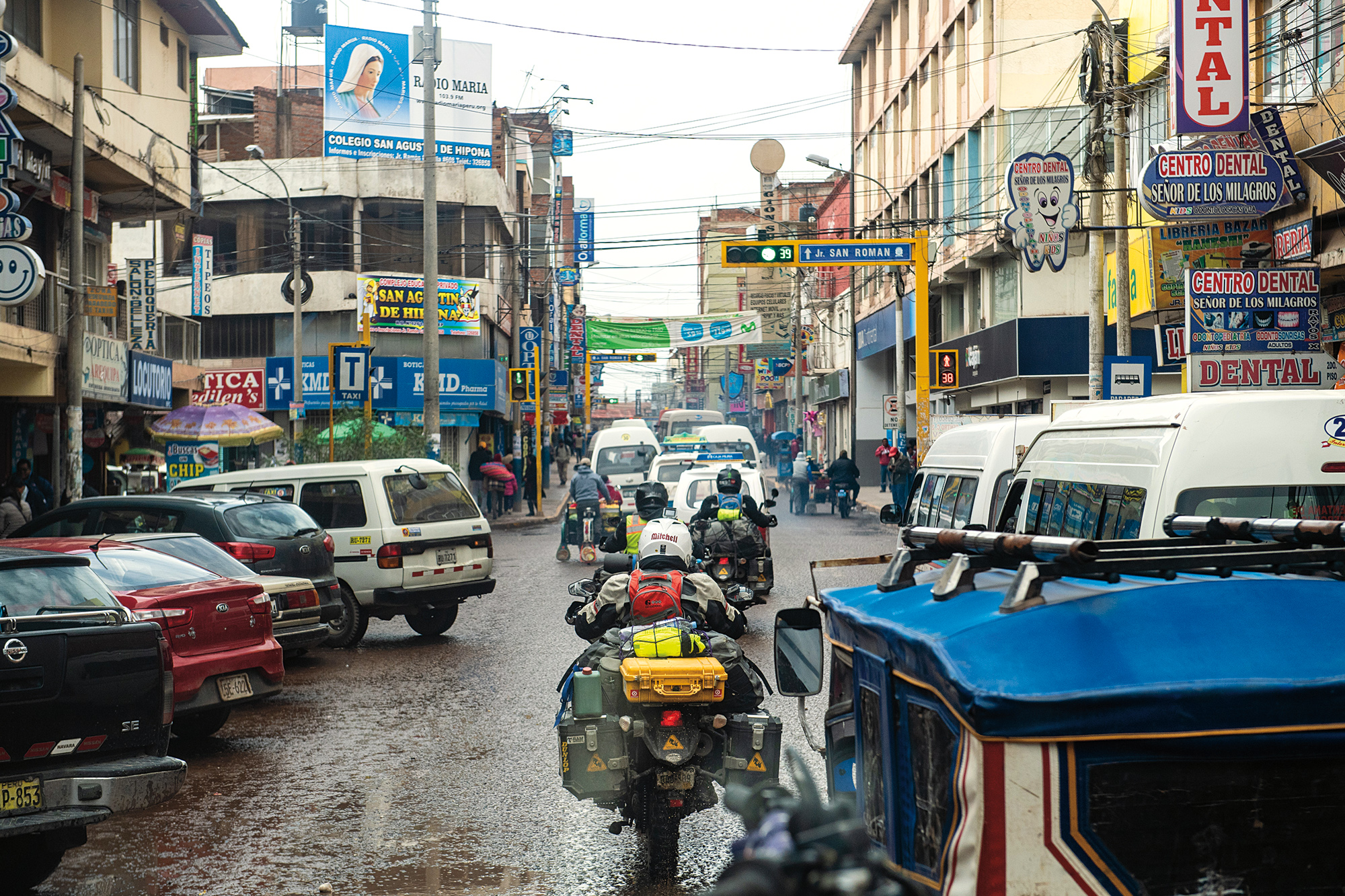 After eight days in the darién, we reached the town of turbo, our gateway to South America. we fixed the bikes and spent a few more days battling the bureaucracy of Colombia before finally convincing them through photos that we had entered Colombia through the northwestern frontier. 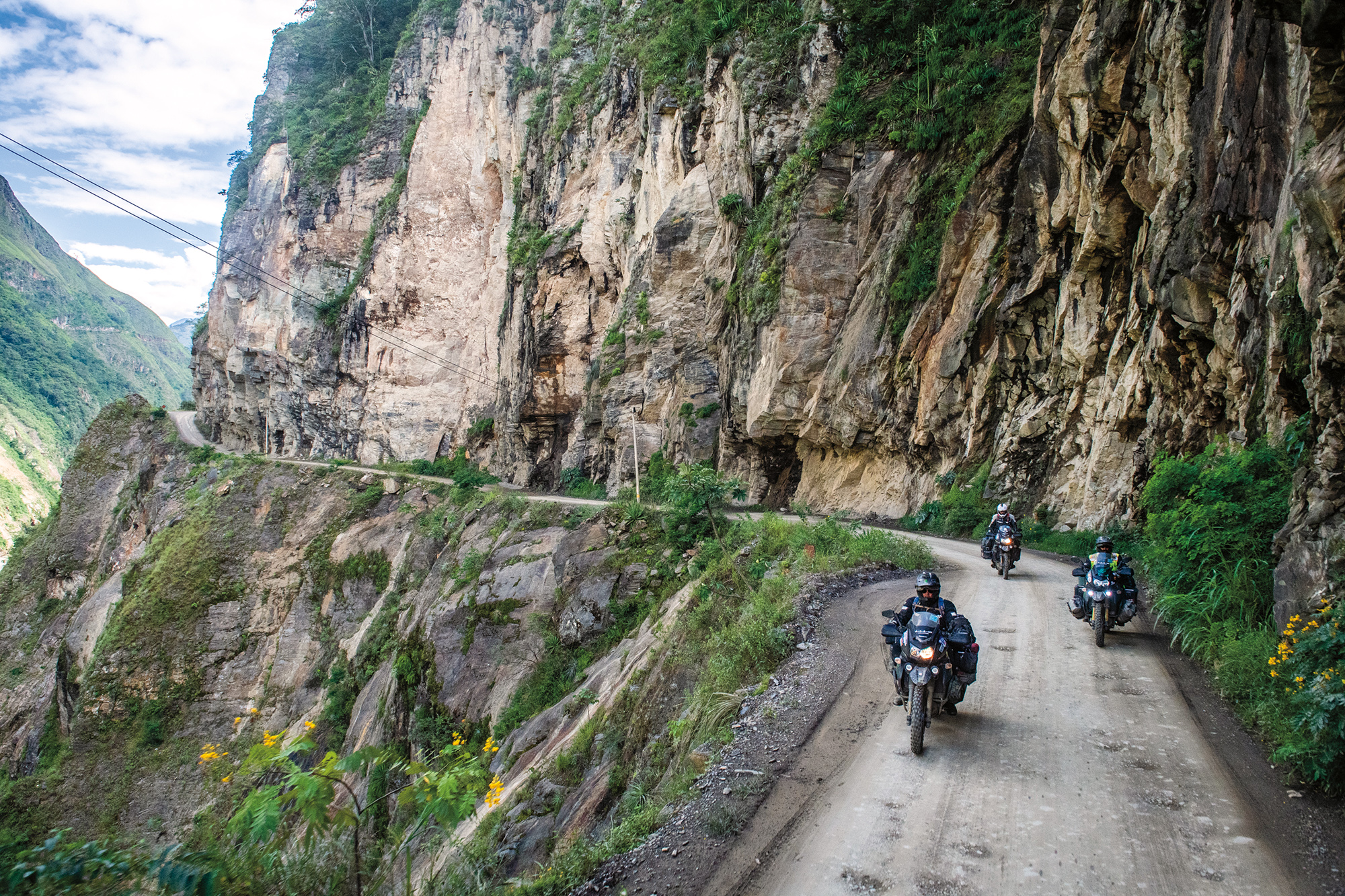 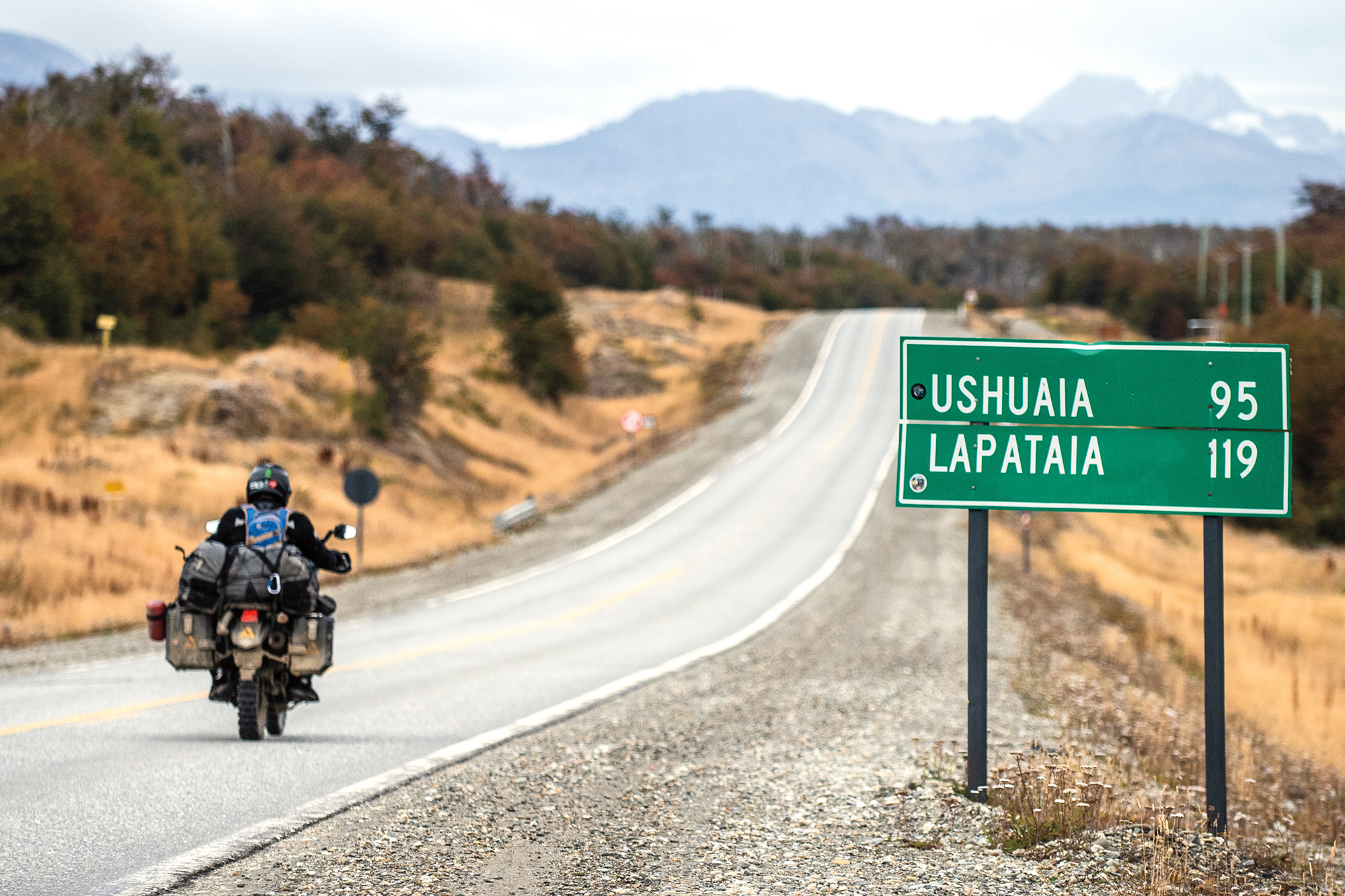 The open roads and even congested cities were a welcome change from the experiences in the jungle.

Most of South America went by too fast; we found ourselves nearing the end in Ushuaia wishing we had more time to explore every side road we passed. 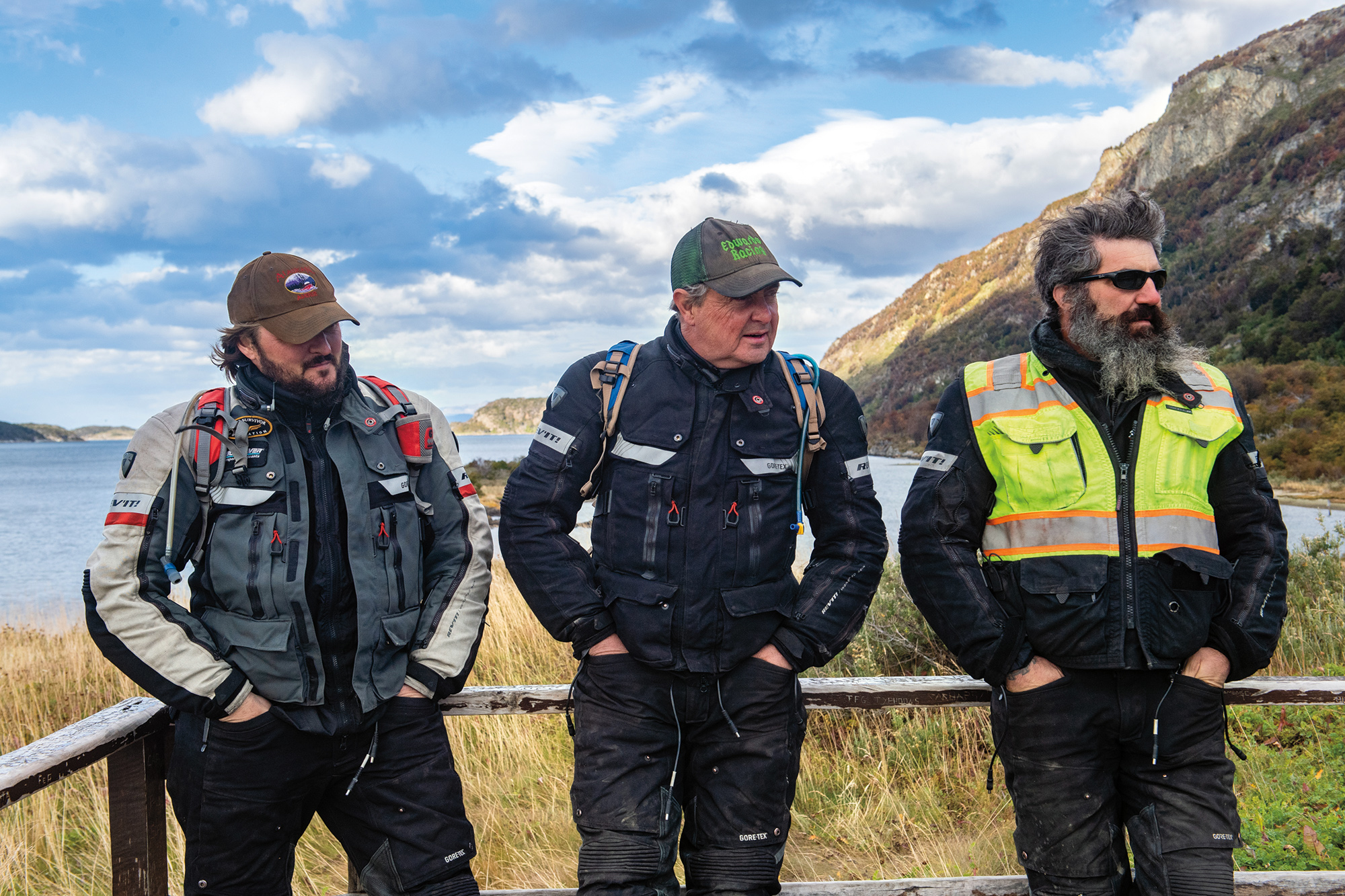 Ending our journey of five months, we reached the southernmost point of Ushuaia, having logged 19,500 miles of the Pan-American highway and traveled through the infamous darién gap in an uninterrupted continuous motorcycle ride. we had a sense of relief at having made it, but also some longing to keep going. most of us couldn’t help but wonder what our next adventure might be.

Find out more at wheretheroadendsmoto.com