A comedy of errors saw us attempting to fill our empty diesel tank in the parking lot of the Eagle Plains Hotel on a toe-numbing, nose-hair freezing spring evening in the Yukon. I’m shuffling back and forth in my down hut boots while Richard struggles in the glacial Arctic air with a myriad of fuel accessories. At -33°C (-27.4°F), diesel loses its viscosity, becoming thick and belligerent and impossible to transfer from a tank through a super siphon or funnel. With zero diesel in the heater tank, we forego an uncomfortably frigid night in the AT Habitat tent camper and fork over the dollars required to secure a room.

It all started with the gate. The gate—with its flashing red lights, chain-strapped poles, and steel lock—brought us to a halt at the Eagle Plains Hotel. This metal structure blocked our passage north from the Dempster Highway’s mid-point to our ultimate destination of Tuktoyaktuk, Northwest Territories. It remained closed for five days, during which we dreamt of crossing the Arctic Circle, descending through the Richardson Mountains and into the Gwich’in and Inuvialuit community of Inuvik, eventually arriving at the Arctic Ocean bordered by the hamlet of Tuktoyaktuk. 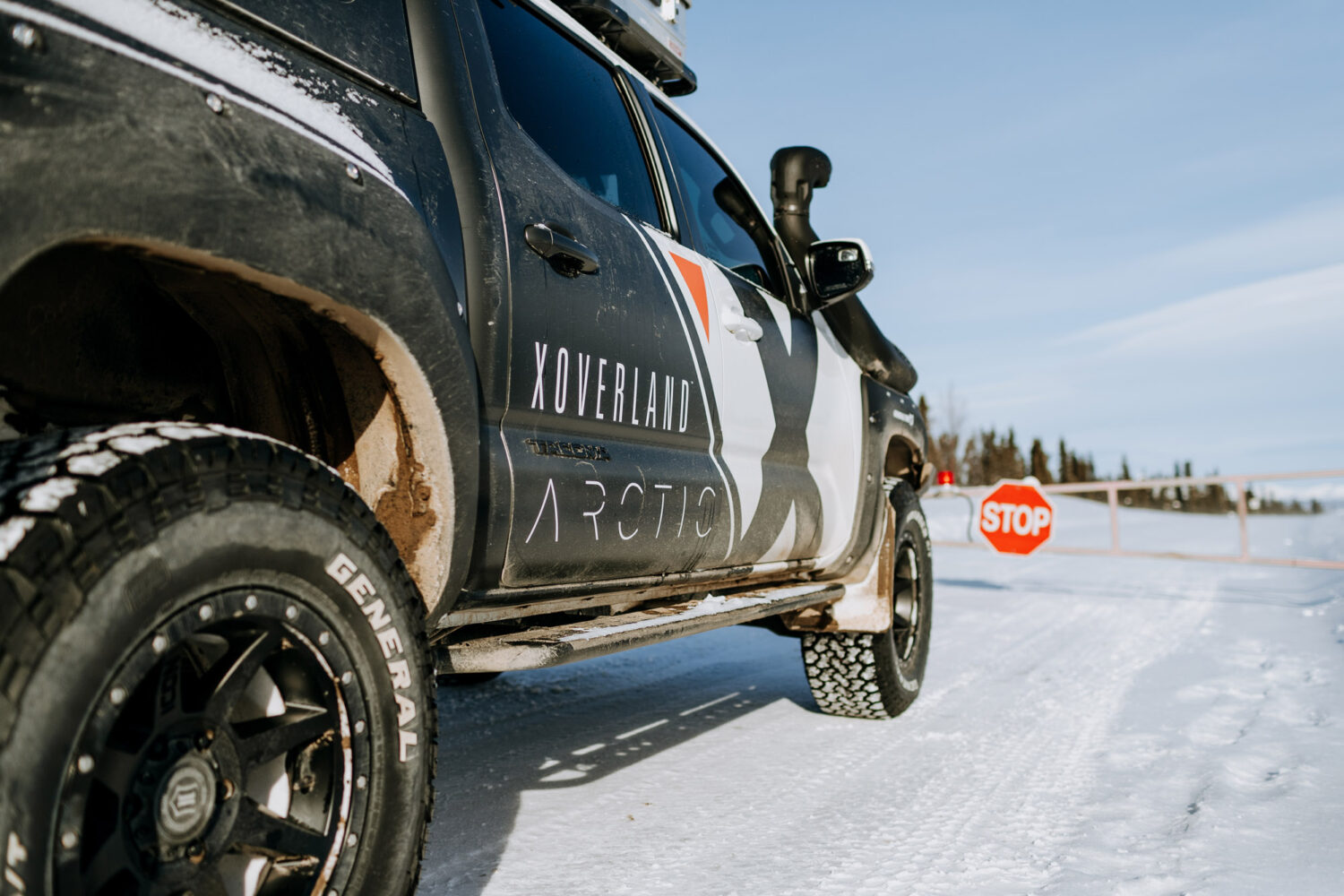 On day three of our stay at Eagle Plains, the highway closed to the south. A second gate was latched, nearly a thousand feet to the south and well within sight of the northern one. We heard that road closures could last anywhere from a few hours to a couple of weeks. So, we tucked in at the hotel and embraced the unknown.

Through his perspectives as an artist, watercolorist, art critic, and instructor, Victorian-era philosopher John Ruskin (1819-1900) made astute observations about slow travel that were ahead of his time. As the author of The Art of Travel, Alain de Botton remarked:

“Ruskin was distressed by how seldom people noticed details. He deplored the blindness and haste of modern tourists, especially those who prided themselves in a week by train…” Ruskin believed that the most precious things were thought and sight, not pace. “No changing of place at a hundred miles an hour will make us one whit stronger, happier, or wiser,” he said.

The hotel is the beating heart of Eagle Plains. With a mere population of nine, most of the community’s inhabitants are just passing through; however, the hotel is the hub for gleaning information about road and weather conditions, fueling up, imbibing a stiff drink, or indulging in a hot meal. Aside from our room, the restaurant became one of our main haunts. We sat at circular tables studying maps of the Yukon lying beneath a clear glass topper while a stuffed caribou looked over our shoulders as we read books or ordered the occasional highly priced meal. Fair enough—I can’t imagine trucking spaghetti noodles, cheese, or fresh beef to this remote location is a cheap endeavor. Eagle Plains sits roughly halfway between the junction of the North Klondike and Dempster Highways and Inuvik, which lies a good 400 kilometres and two river crossings away. 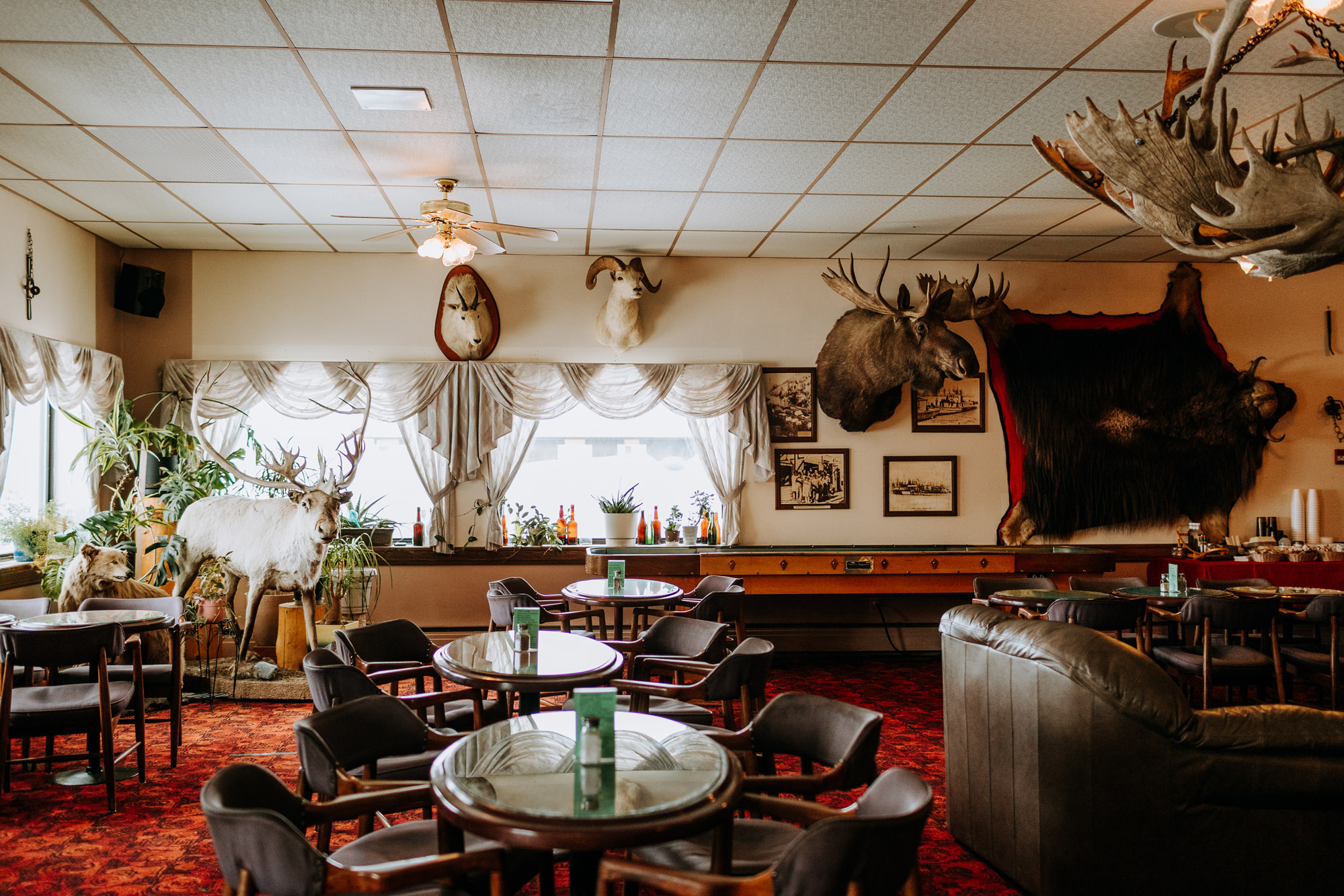 After several days, my attention shifted away from the boreal forest laying beyond the large, cracked windows to a collection of framed sepia photographs lining the restaurant walls. The story of the Mad Trapper of Rat River is set out sequentially, encouraging patrons to walk around the room and follow the photographic tale from start to finish. Succumbing to both boredom and intrigue, I finally completed the trek, following the long and winding tale of the 48-day manhunt by the Royal Canadian Mountain Police for Albert Johnson, a trapper and outlaw wanted for shooting an RCMP officer in Fort McPherson, Northern Territories, in 1931. Johnson’s run from the police spanned 240 kilometres in temperatures averaging -40°C/F. Johnson was such a resourceful woodsman that his capture required the use of an airplane, flown by renowned WWI flying ace and bush pilot Wilfrid Reid May, but not before Johnson crossed the Richardson Mountains by foot. This information proved helpful when we arrived in the remote hamlet of Aklavik a week later, only to stumble upon Albert Johnson’s grave, surrounded by a fence and half-buried in a snowdrift. 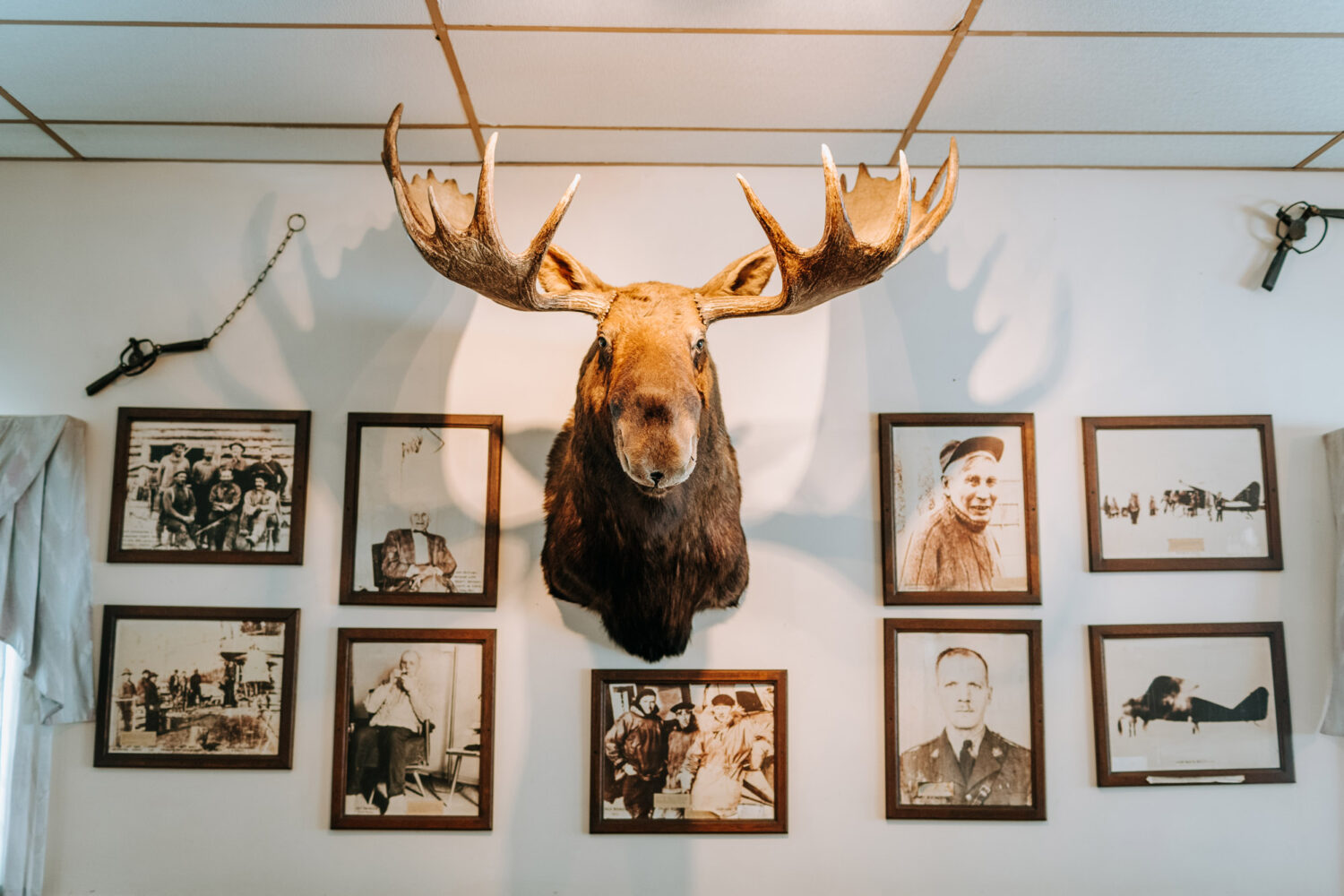 Each day we returned from the restaurant or from the bulletin board that housed the latest paper printout about weather and road conditions, through the lingering cloud of cigarette smoke in the hotel hallway to our room, which quickly became our new home. We watched re-runs of Frasier, enjoyed the banter between Temperance Brennen and Seeley Booth during Bones marathons, cleaned our clothes in the sink, gazed at tangerine-colored sunsets from the window, and cooked dehydrated meals in our Jetboil. As WiFi was only available in the lobby, we were forced out of our small cave and into the common space, eagerly refreshing our browsers and willing the color to change from red to green on the Northwest Territories highway conditions website.

British-born essayist and acclaimed travel writer Pico Iyer touched on the art of slowing down in his essay, The Joy of Quiet, and book, The Art of Stillness: Adventures in Going Nowhere. No doubt influenced by considerable time spent with the Dalai Lama (Iyer penned The Open Road: The Global Journey of the Fourteenth Dalai Lama and has known this famed Buddhist for the last three decades), he argues that in an age where everything is fast-paced, nothing could be more invigorating than slowing down.

“At some point, all the horizontal trips in the world stop compensating for the need to go deep into somewhere challenging and unexpected. In an age of distraction, nothing could feel more luxurious than paying attention. And in an age of constant movement, nothing is more urgent than sitting still,” he says.

The restaurant hotel provided more than food, drink, and entertainment. It was also a place to socialize with other patrons, including long-haul truckers who popped in for a meal or the sharp waitress cum bartender who also ran logistics from the front desk. A lively group of locals from the remote community of Old Crow joined us in the dining area. Home to the Vuntut Gwich’in First Nation, Old Crow is only accessible by air in the summer or PistenBully snowcat in the winter. A group of scientists filled a second table. With the aid of helicopter pilots, the scientists spent days analyzing the growth and color variation of tree needles throughout the boreal forest. Installing sensors on the trees, the explained, would allow them to study by satellite in the future. 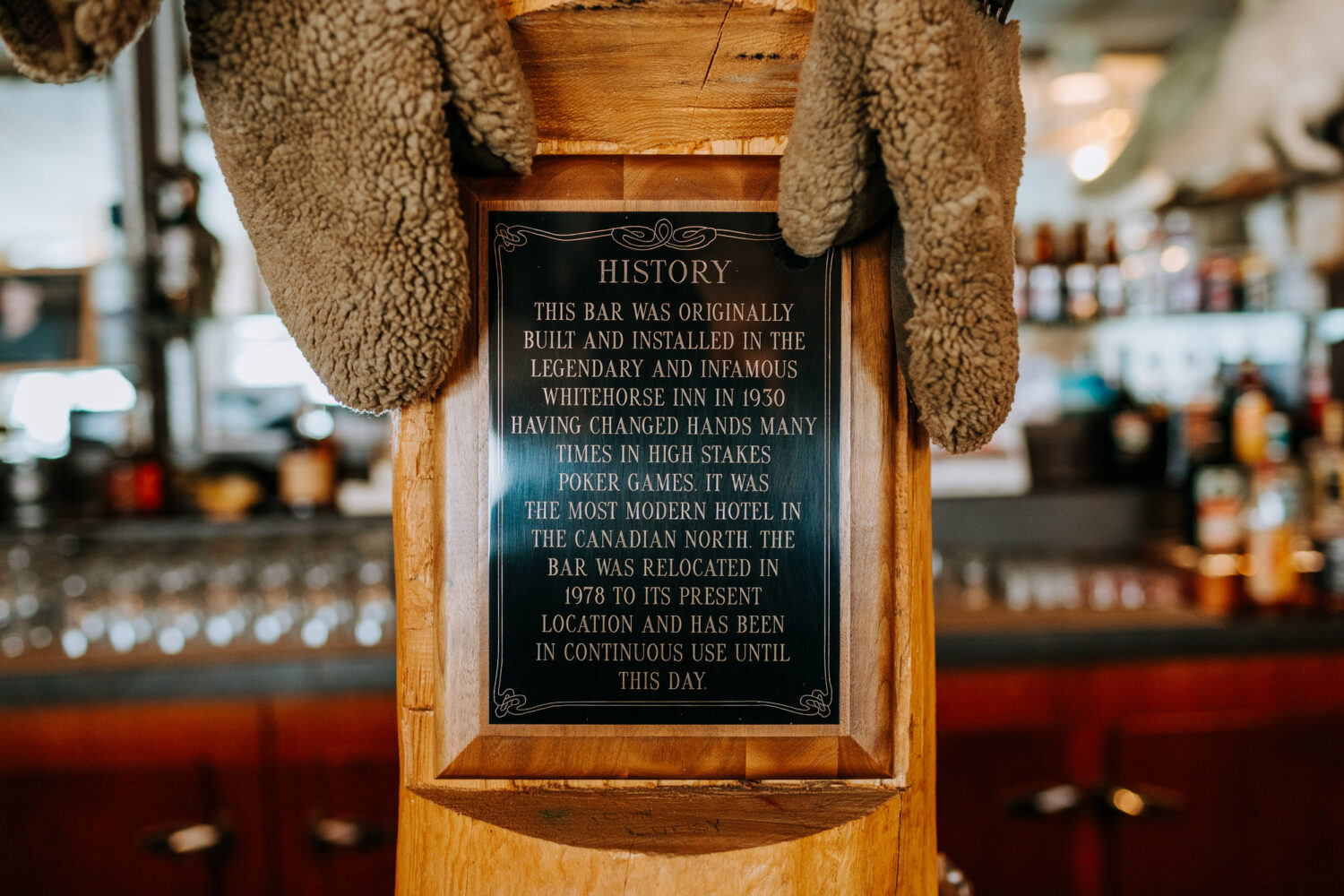 We chatted with a family who had driven nearly 2,500 kilometres in their minivan from Prince George, hoping to surprise Grandpa with a visit in Tuktoyaktuk, while two nurses in the midst of a move from Jamaica to Norman Wells told us hair-raising tales of becoming stuck in the snow multiple times in their two-wheel-drive Chevy Equinox. Fortunately, they were rescued by a grader or maintenance vehicle each time. In addition to the drivers of a “snow camo” printed Ram 3500 with Mattracks and the PistenBully snowcat, the 15 to 20 transport truck drivers were the most well-seasoned travelers in the area.

By our fourth day in Eagle Plains, we had caught up on lingering work tasks and began to feel well-rested. While we remained antsy and packed our bags each morning in preparation for a quick departure, part of us enjoyed the slower pace. We didn’t realize it at the time, but the experience was preparing us for the Covid-19 lockdowns and uncertainty that were soon to follow.

Nearly two weeks later, we returned to Eagle Plains on our way south. After a 10-day stay in Inuvik due to inclement road conditions and road closures (and a failed attempt at tackling the Wright Pass heading southbound), it was a relief to see the familiar rancher-style building and group of trucks parked outside. 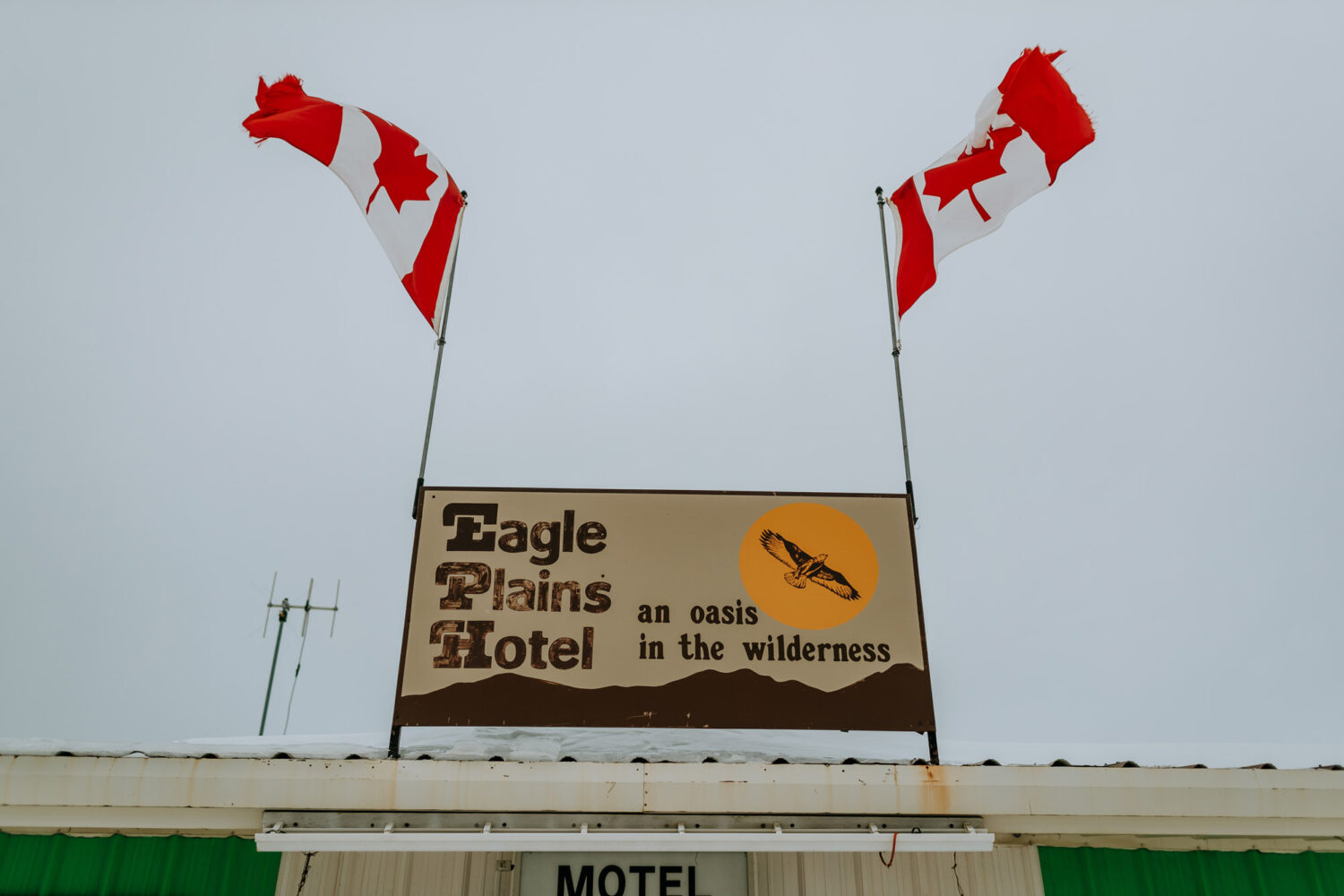 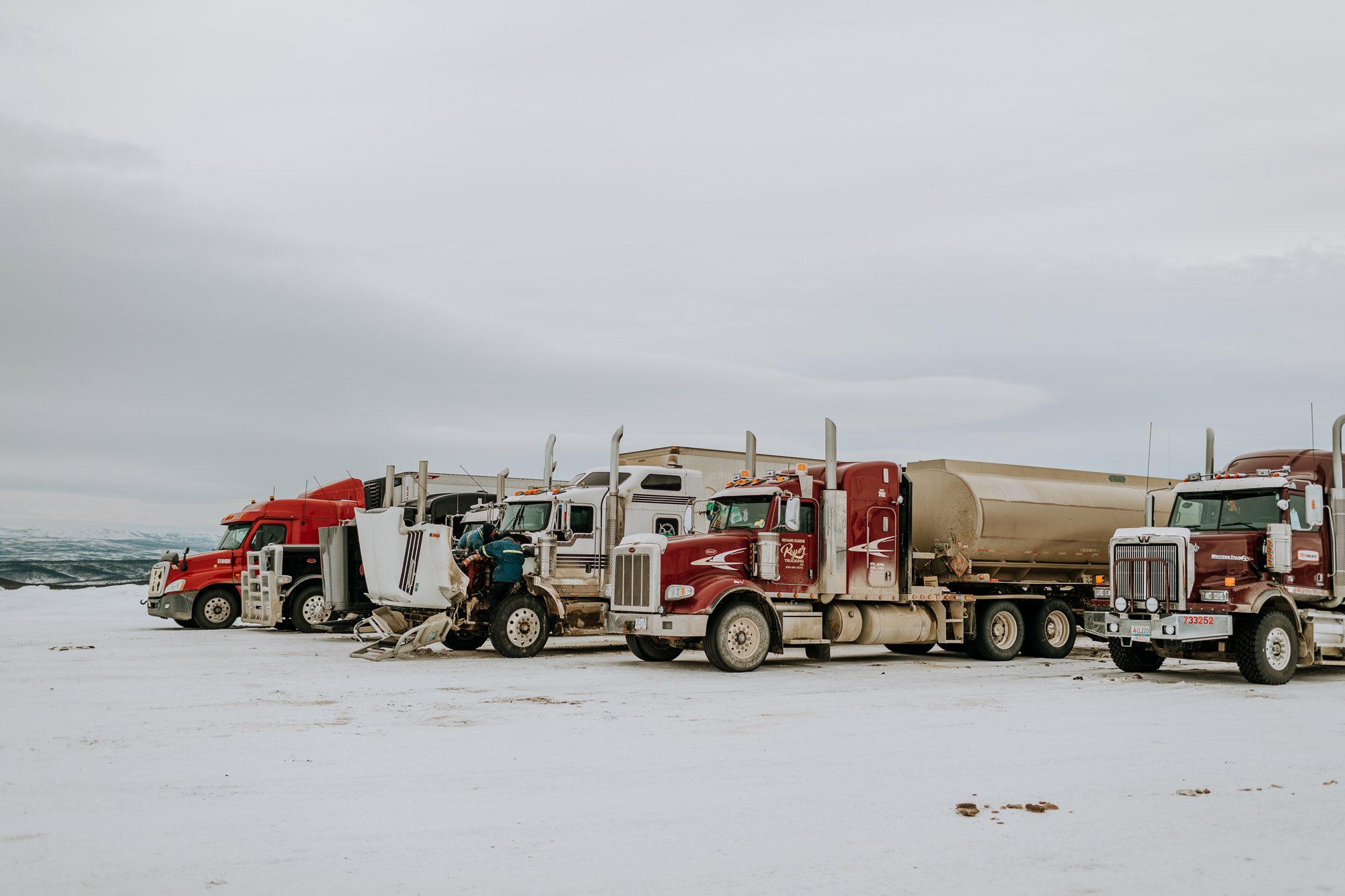 That night, I pulled on a pair of snow pants over my wool long johns and a second layer of sweatpants. All bundled up, Richard and I walked into the nighttime chill. My cheeks burned immediately from the cold. Leaving the Eagle Plains Hotel behind, we trekked away from the light and racket of the running transport trucks, out into the dark space beyond.

A hazy streak suddenly appeared, painted across the velvet sky. Transforming and twisting, it turned an emerald green. As I looked up, I thought about how the most impactful memories from this trip revolved around simple experiences: a tour of the local bakery in Inuvik by our Uruguayan overlander friend Juan, playing board games by the fire in his apartment, or understanding a little bit more about far-off places like Eagle Plains or Inuvik. Places we likely wouldn’t have spent much time in if our schedule hadn’t been interrupted.

I turned, looking at Richard with a smile, as the northern lights slowly danced above our heads.