A few years ago I wrote an article for Overland Journal reviewing the best personal locator beacons and satellite-based emergency communicators on the market. Not all too much has changed since then with regard to the products and services available, but I continue to get questions about which system I recommend, why, and what my experiences with these units have brought to bear in the years since that first editorial. I get questions about battery life, coverage areas, features, but I almost never get asked the one question everyone should:

When you push the help button, exactly who receives that call?

For most of the people using satellite based devices, they are either using a SPOT or Delorme inReach. Both have a dedicated help button that issues a Mayday to a first response center at GEOS Alliance. So, who and what is GEOS, and how do they factor into the response process?

GEOS Worldwide, LTD is an independent emergency response organization headquartered outside of Houston, Texas. Their high-tech underground facility is the central component in their International Emergency Response Coordination Center (IERCC). That facet of their operation is somewhat self explanatory. When GEOS receives a distress call, their IERCC department swings into action to coordinate an immediate and appropriate response. Sounds simple enough, but what does that actually mean?

A subcontractor of SPOT and Delorme, GEOS is tasked with receiving inbound distress calls, determining their location, then initiating the dispatch of emergency resources known to service that location. To achieve this end, GEOS maintains a database of local first-responder assets in over 130 countries and maintains an on-call translator service to facilitate communications in more than 200 languages. GEOS also maintains a large network of offices around the globe in Perth, Marrakech, Paris, London, New York, San Jose, and Los Angeles. 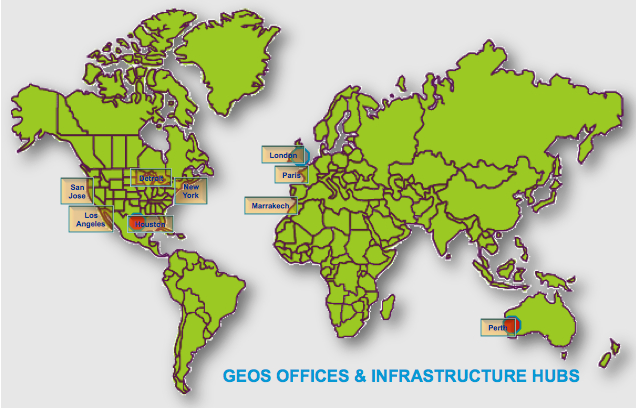 You pressed the SOS button. Now what happens?

If you have a SPOT device and you press the SOS button, you unfortunately have to place all of your trust in it and hope help will arrive. As a one-way communicator, once you press the help button, there is no way for GEOS to contact you on scene. However, the process by which help is summoned is rather straight forward.

After the SOS message is received by GEOS, the location of the signal is then referenced with the emergency first responder assets closest to that location. Not knowing the nature of the emergency has some limitations. In most cases, the first assets dispatched will be law enforcement and/or medical response teams. These responders are operating without specifics until they arrive on scene. They may not even have the means to access your location and may in turn have to contact Search and Rescue if available.

Simultaneously, as the first response teams are being dispatched, the agents within GEOS and the IERCC team contact the phone numbers listed on the individual SPOT owner’s account. This includes the registered user’s number and the emergency contact associated with that account. This is an attempt by GEOS to gather critical information, but comes with obvious limitations. The emergency contact, if reachable, seldom knows anything about the emergency. The registered user is often out of communication range, otherwise they wouldn’t be relying only on the SPOT device for emergency communications.

It’s within this constrained one-way communication system that delays happen and multiple dispatch calls need to be made. This is not to say the system is flawed. It is however––slow. Plus, the party on scene waiting for help has no way to confirm that help is coming. For users of inReach devices, which again push a signal straight to GEOS, the two-way communications of the device add an unmatched level of expediency and specificity to help aid the response effort.

When the help button on an inReach is pressed and the distress call received by GEOS, a two-way line of communication is opened. GEOS can request details pertinent to the type of emergency, condition of victims, and location specifics like how accessible is the scene to standard first responder vehicles. The victims on scene can then be informed of how long it will take for a rescue to reach them, or what they might need to do to better their chances of rescue. The victims on scene can even be given critical life saving medical instructions over the inReach device.

The procedure for dispatching help directed at an inbound SOS call are relatively unchanged throughout the entire GEOS global network. It’s important to understand that GEOS can only alert the authorities proximal to the distress signal. It does not facilitate the response or effectiveness of those resources. Although unlikely, there are places in the globe where rescue assets are simply not available.

With the button pushed, and now better understanding who might be arriving and how they learned of your predicament, the only variable is whether or not you have SPOT’s one-way communication or inReach’s indespensible, and possibly life-saving two-way comms.

In my opinion, one backed up by my personal choice to protect myself with the best safety net possible, I use the inReach system and trust it wherever I am in the world.

TIPS for your best chance of survival