“Do you guys live around here?” We’ve heard this phrase quite a few different times since we arrived in Arizona. After some pause, an awkward smile and comical facial contortion, our response is always “sort of…?” Because, yes, we’re “new” to whichever area we’re in at the time, but in Arizona, from October to May (ish) we’re locals. Then we leave for some place less akin to an oven, and come October, we find ourselves back in Arizona, new again. Caught behind a side-by-side traffic jam amidst the canyon trail that was our objective that afternoon, a mature group of off-road adventures laughed in amusement at our conclusion that we are Snow Birds. “You’re 50 years too early!” Ten years ago, they’d be right. But in the era of ever advancing technology, not only do we own our own business at our ripe young age, but there’s no Brick & Mortar to tie us to one place––ever. 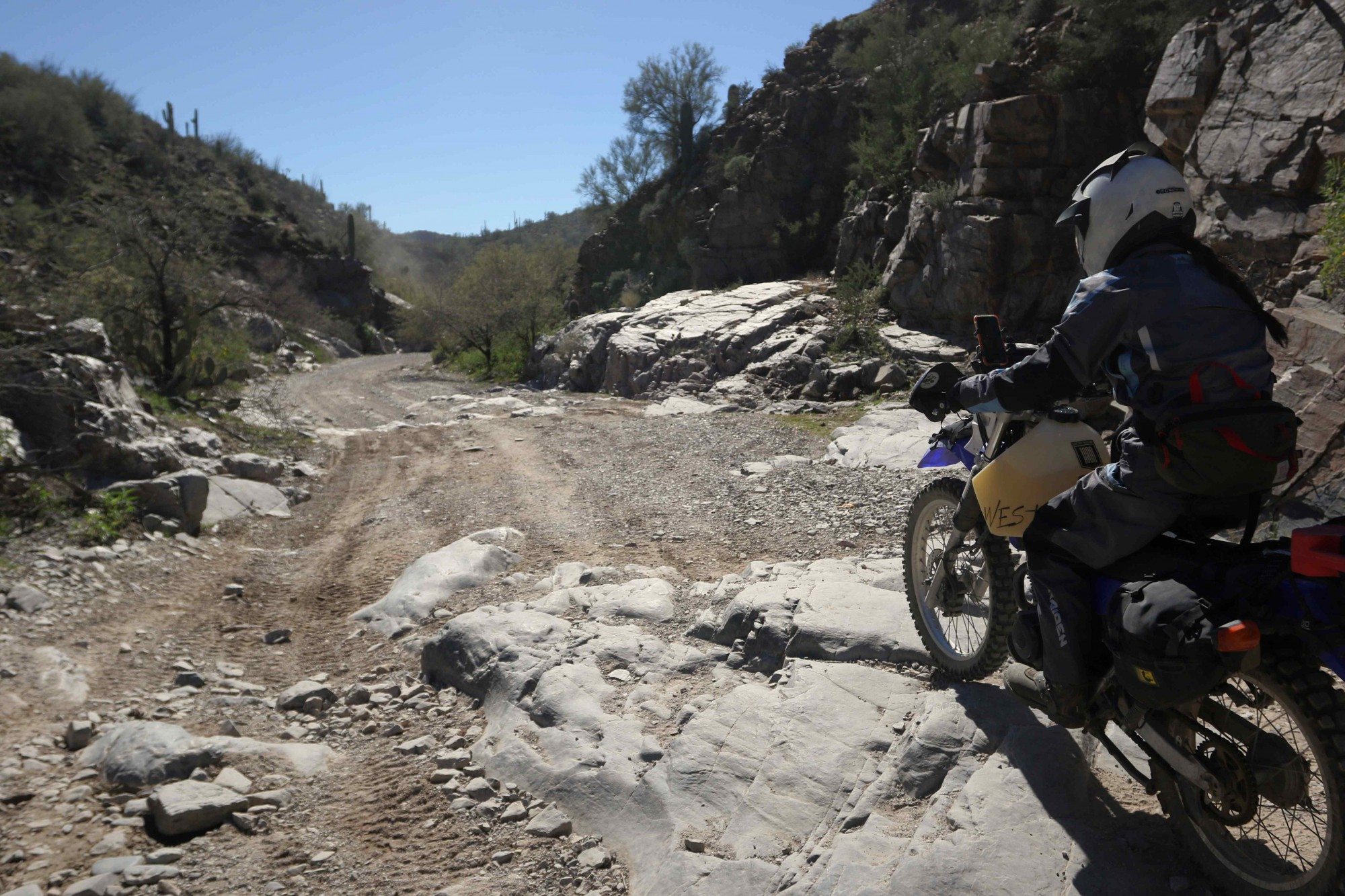 The result is a couple of workaholic wanderers with a liberating work day. Coffee, cookies and computers in the morning, and come noon we buzz off on the bikes or wait for a swell. When it’s too hot, we seek shade under the evergreens. When it’s too cold, we find warmth in the arid desert – which brought us to the sunny side of the U.S., and on this day, to Box Canyon. In Seattle, it was 53 degrees and wind. Portland was 62, and Phoenix a balmy 86 degrees. Luckily it was only 81 in the mountains. And so again, Justin and I outfitted our XT’s and tried to get lost in the Tonto National Forest. It had been a few weeks since we last rode on rugged terrain, and the surge of excitement and satisfaction that always electrifies us made its lasting presence once more. Not that I’d forgotten, but for once the flutter of nerves never really surfaced. What had many times before intimidated or defeated me was quickly dispatched by my throttle hand and able balance. 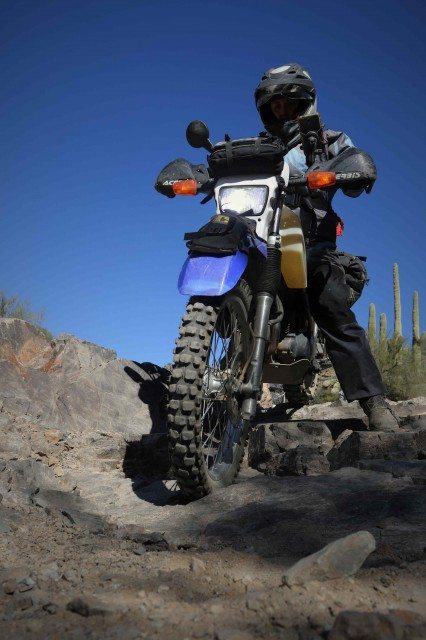 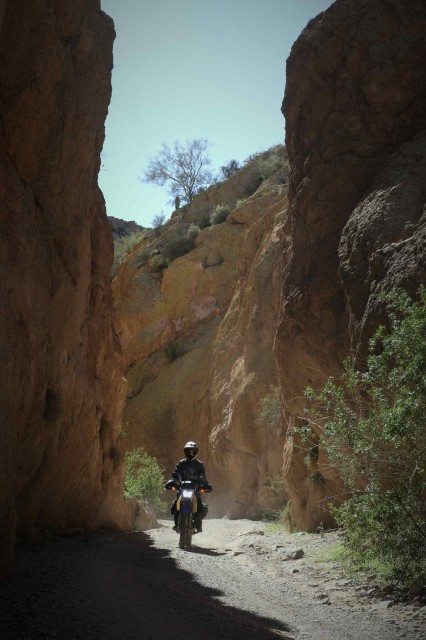 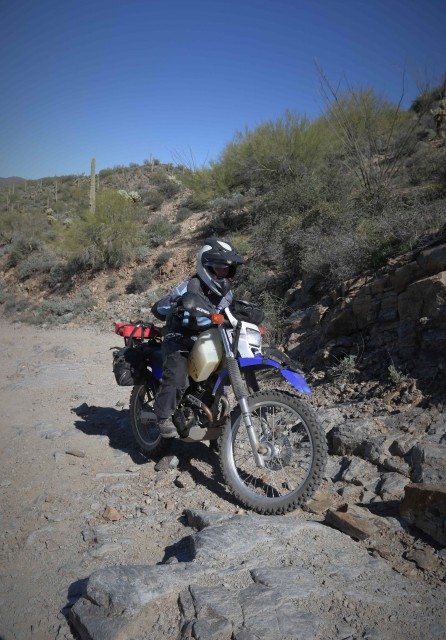 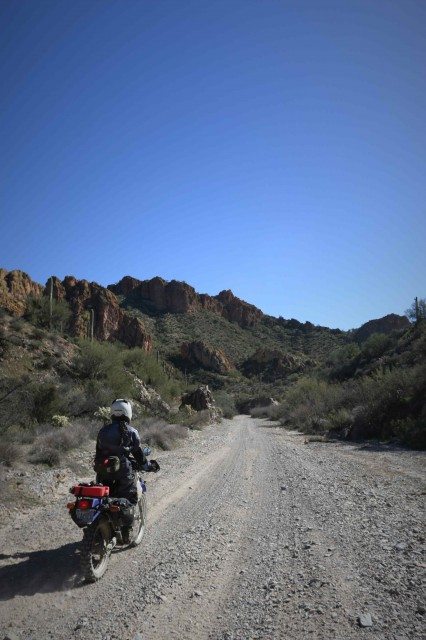 In Arizona there are blue skies, endless rides, ancient history, and a budding community of craft beer buffs. I like it out here. I felt fooled when I’d first arrived. This isn’t the barren wasteland – flat, dry, dusty and colorless! Though the Phoenix area is actually quite flat and dusty, the world that surrounds it is green, lush, varied in altitude and flecked with lakes and rivers. The temperature for at least six months out of the year is temperate to hot, but not deadly. And within a two hour’s ride up I-17, goosebumps could riddle your skin and steam float from your mouth when you find yourself at 5,367 feet surrounded by snow, woods and adventures galore. If for some reason you want something more, coastal California is less than six hours away. Moab and Santa Fe are seven and Crested Butte Colorado a mere 10. 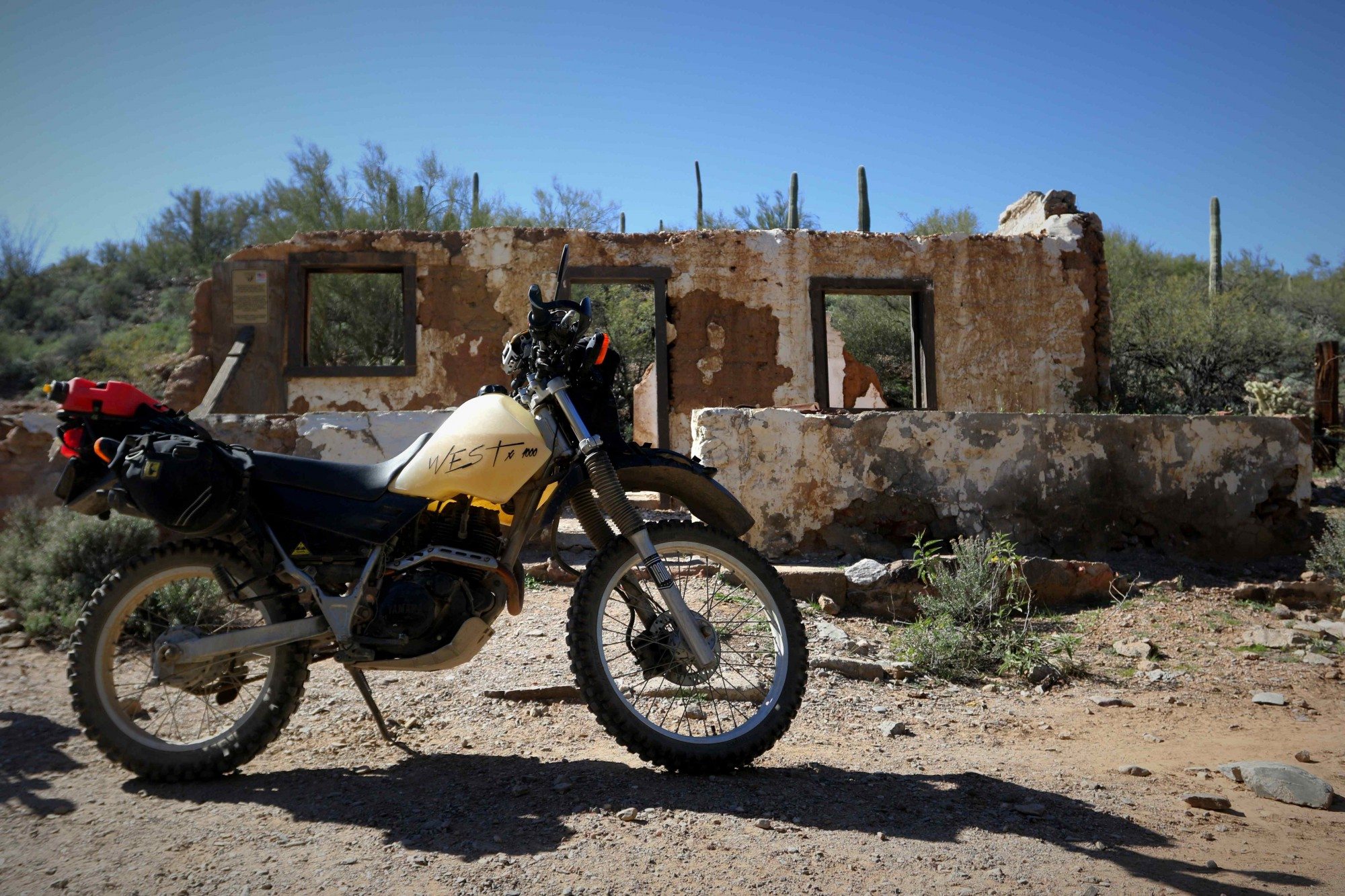 Elevation isn’t high on Box Canyon, but the rolling hills provide enough climb for anyone daring. Though the road was wide, the assorted topographical features tested my) vigilance and endurance. But, what really made the ride? Squeezing through the slowly narrowing gully at faster speeds than your mother would advise, knowing that a simple low-side could mean fatally close contact with the canyon wall. It was an invigorating ride when all we’ve had on dirt in a while was forgettable at best. Indifference to easy rides had lulled us so lethargic, we ran to our American road mistresses (some call them ‘cruisers’) to feel the hum of steel and hear the roar associated with power unlike what we’ve known in a while. If we couldn’t have technical single-track or pin the altimeter to the top, then we would have speed, size and bob between semi-trucks on Interstate 10. It’s the thrills born from fear that burn deepest into our memories. And it was going to be had in whatever form it came. 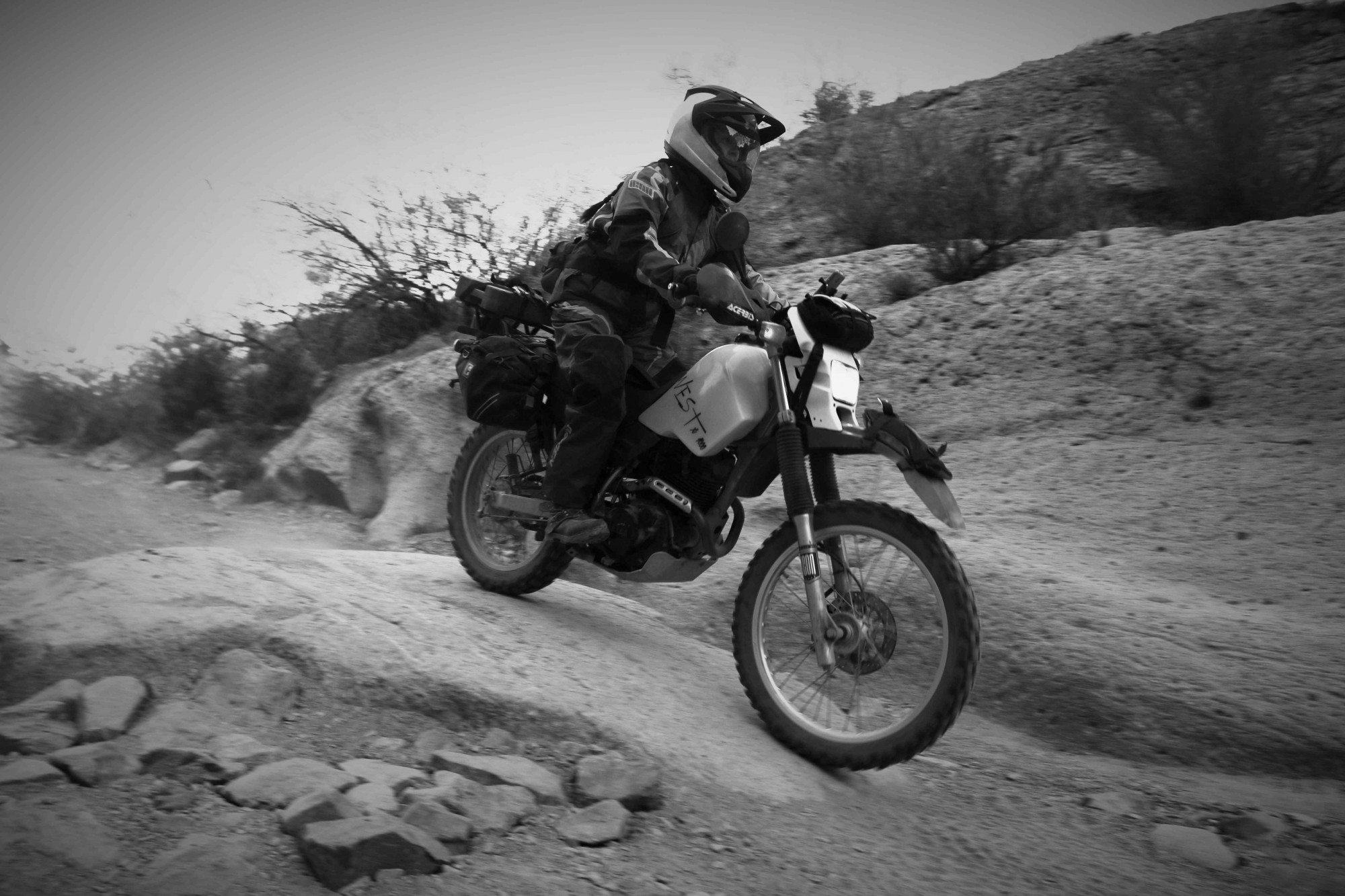 Whether pounding pavement or pioneering paths, going south for the winter is the only way to make those dry-day activities happen – comfortably. And just like the many ver 60 who patron Phoenix for the cold months, we’re happy to fly with the birds. After all, we didn’t start a digital business to be uncomfortable, ever. Unless we want to be, of course. So to answer the nice man under the safari hat, “Aren’t you 50 years too early?” To eat Fig Newtons and live in an adventure mobile; to put up with nothing and to think the kids these days are doomed; to see loved ones on the holidays, travel endlessly, and to choose our own schedule? Are we too early? We said, “Nope. You’re 50 years too late.” And we left him with a wink and a knowing smile. After all, it’s due time to take advantage of the era and see the world––in person. 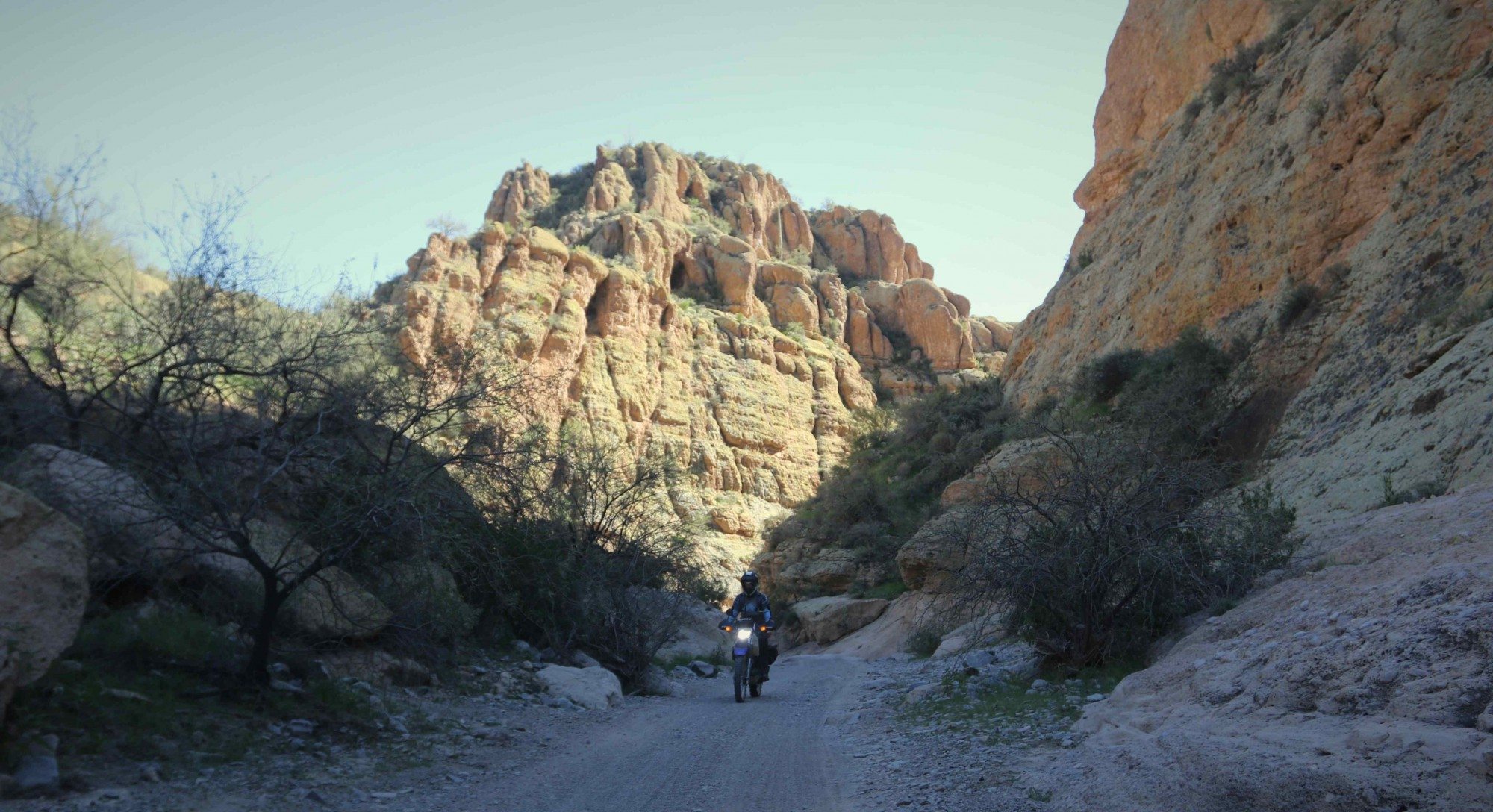 Kyra Sacdalan is a freelance journalist. She is the co-creator of WESTx1000, a multimedia company that creates unique content for motorcycle community. Follow her on Instagram: @WESTx1000

Kyra Sacdalan is an avid motorcyclist and author. Her work has been published on Expedition Portal, RevZilla and ADV Pulse, among others. Before her rapid ascent into adventure riding, Kyra had spent nearly a decade as an entertainment rigger and rope access technician. Although she's been riding motorcycles for a number of years, her passion for off-road riding and motorcycle touring is newly acquired, and with the help of her boyfriend (and partner in crime) Justin, she fell head over heels. Trading in her ropes and fall protection for steel on two wheels, Kyra left her career to chronicle her successes and (many) failures on and off the road. Henceforth, she has been lucky enough to contribute her opinions and experiences testing gear, gadgets, skills and - most of all - her limits. Now an author and avid rider, Kyra spent months riding her XT225 dual-sport, affectionately named D2, from the Pacific Northwest to the Baja Peninsula. With plans to take over the world - or at least see it - Kyra has no intention of applying the brakes and full intention of documenting everything that happens from start to finish.

From the ExPo Vault: Is your overlander overbuilt? 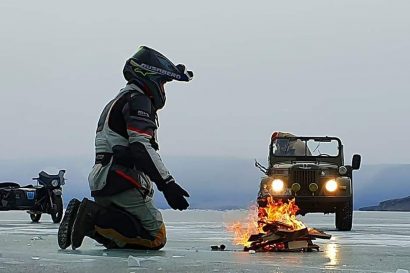 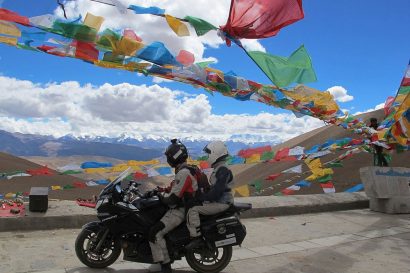 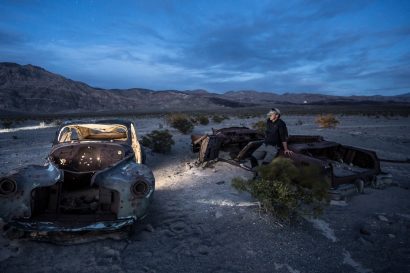