Do you ever let your mind wander to a place just out of reach? Have you seen the fossils of extinct creatures in museums and wondered what they were really like? Have you been teased by thoughts of what our human ancestors might have seen when they first came to South America—creatures now gone from memory, represented only by the hardiest fossil record? Many have fallen into extinction but some remain. In great tracts of primeval forest, still chiefly untouched by human hands, life teems in myriad varieties, millions of nooks and crannies filled with specialized life forms, known and unknown, awaiting our curious glimpse. I could only begin to wonder how many weird creatures—I’d get to intimately glance. I wanted to see them all! A romantic ambition but heading into the Amazon, I was going to give it a damn good try. 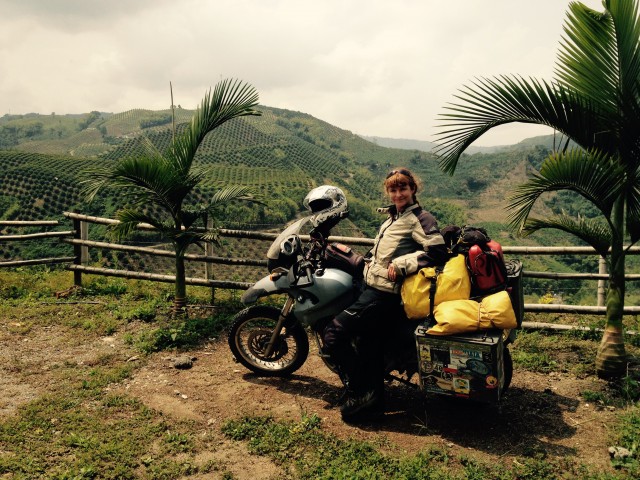 With our motorcycles firmly out of sight and mind, “WELCOME TO THE JUNGLE!”blared through my mind, courtesy of Guns and Roses the moment we stepped into our motorized canoe. At only six metres deep, the Cuyabeno River looked more like an abyss of beef stock made dark and glossy by the nutrients in the soil and tannins released from decomposing leaves. Every drop was from rainwater. As clueless voyeurs, we canoed our way down an Ecuadorian affluent of the Amazon Basin. It’s a place, if there ever was one, where everything is always more than you could ever expect it to be. 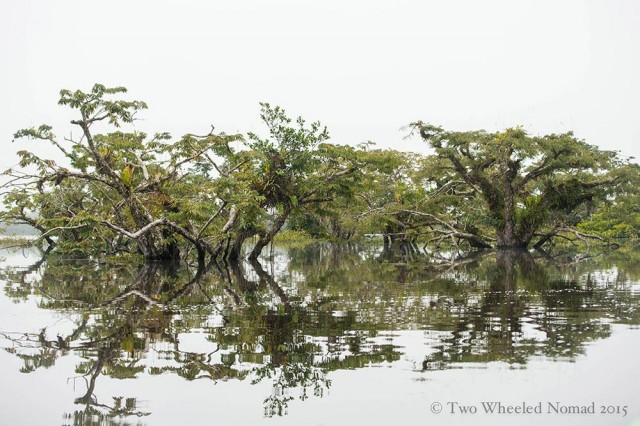 Much of Amazonia is surprisingly easy to traverse. The rivers are your highways, and most of the land is flat or has a gently rolling topography. Cuyabeno reserve, our home for ten days, is 600,000 hectares; a flyspeck of the ancestral lands associated with five native groups: Cofan, Kichwa, Secoya, Shuar and Siona. 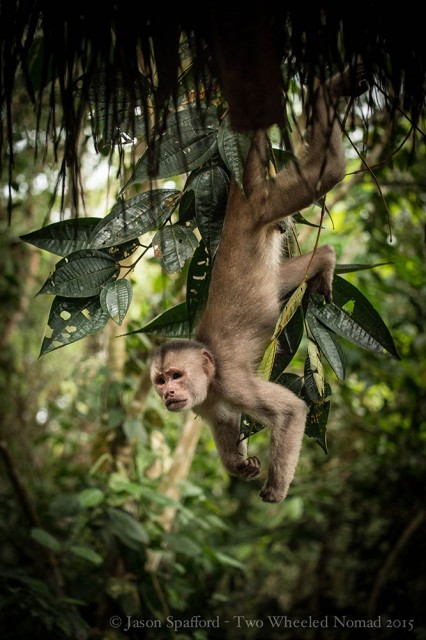 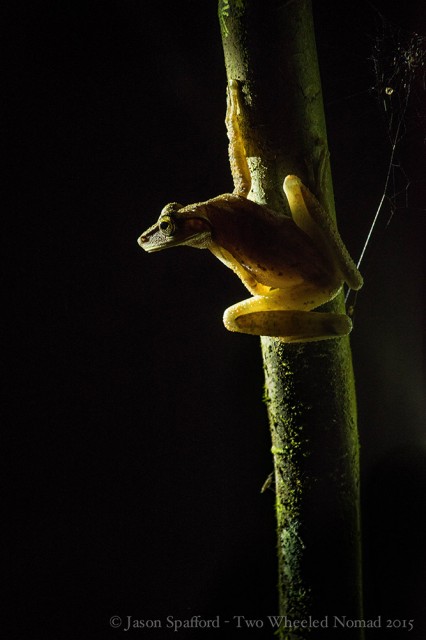 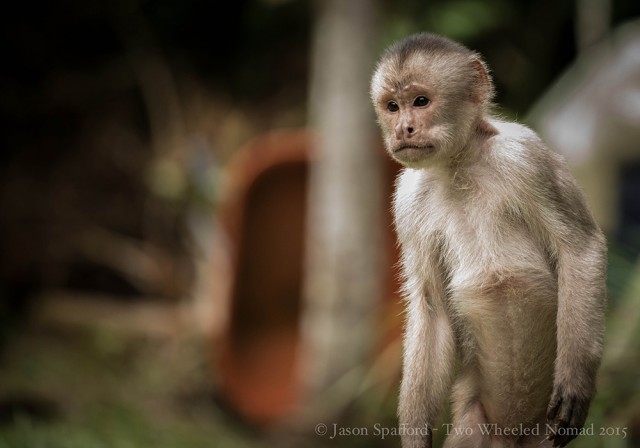 The warm breeze whipped at my clothes and ruffled my hair; I looked up and there was a snake bird. Not because it seizes snakes, but because of its long slender neck. Oh my goodness, “Look at that!” It was a squirrel monkey with a white painted face—nimbly hanging from a cedar. The show turned into a circus of monkeys clowning around—swinging acrobatically from tail to branch. Just because they can. It didn’t take long to realize the opportunity cost of looking at one creature to the forfeit of missing another. I needed more eyes, and quick.

Dumping our bags was the sum total of ‘Getting settled into jungle life’. Siona Lodge was a handmade thatched-roofed snuggery. Adorned with rustic detailing, it struck the perfect cord of traditional, low cost and authenticity. The night walk that evening took us to an intense level. Even though my enthusiasm dial was turned to high and I was assuredly in the mood, my ability to relax in a state of mindful awareness was stymied by some unfounded anxiety. An eerie prickle fluttered up my back—knowing all too well poisonous creatures and paralyzing creepy crawlies squirting neurotoxins at a misconstrued, furtive glance—come alive at night to play. Whoa! 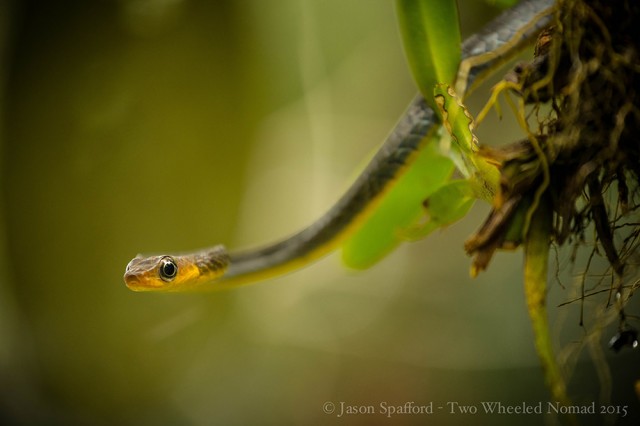 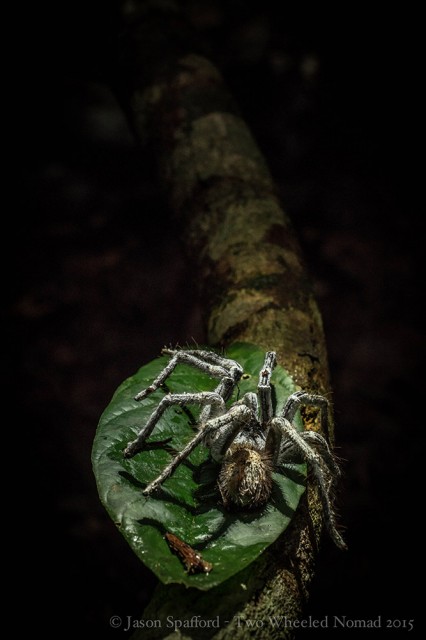 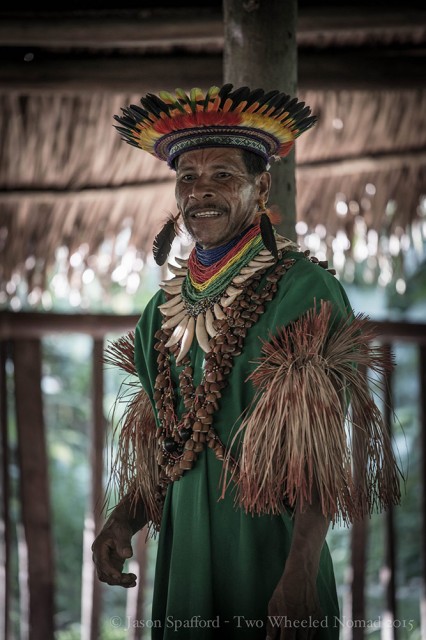 I was on edge albeit tingling with raised-hair-on-the-nape-of-my-neck excitement. I soon succumbed to a series of less-than-ladylike flavoured gasps with each brush of hanging vines and plants sweeping around my head and shoulders. Every other tree root seemed to writhe and slither in the shadows cast from erratic beams of torchlight—appearing moistened and snake-like underfoot. As we stepped deeper into the black wilderness, a sea of tiny eyes glistened back. So far, so nuts.

I burst out from the foliage and into the open. The understory of our walk ended on finding a rainbow boa constrictor taking comfort beneath someone’s lodge cabin, which was elbow-jostlingly popular. Luis, our naturalist guide debriefed us as we poured over the species safely behind laminated plastic we’d sighted that day. He was the kind of guy that thrived on his indigenous heritage and biodiverse back doorstep. I was buzzing off his buzz, like an emphatic bee. The guy dropped all pretense and unexpectedly launched into a great roaring chuckle every now and again. I love it when someone’s laugh is funnier than the joke. 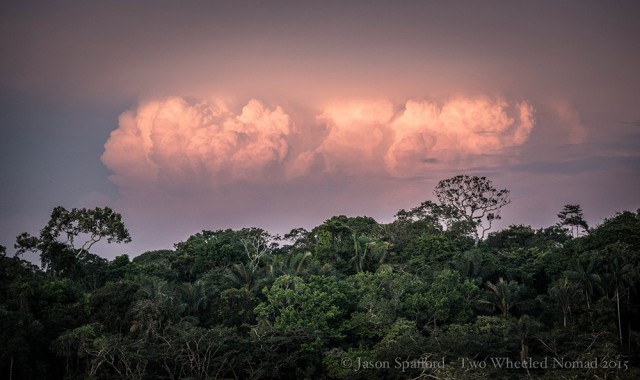 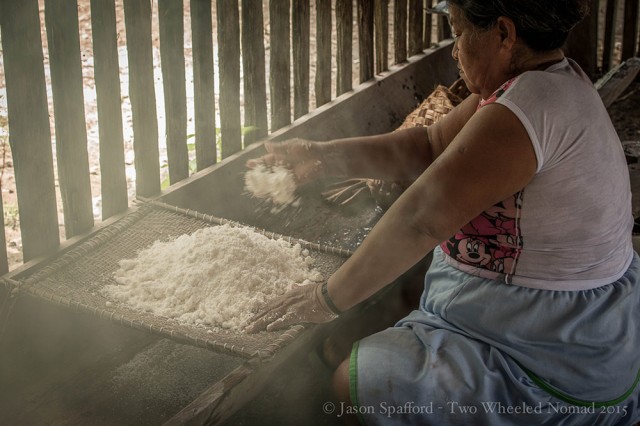 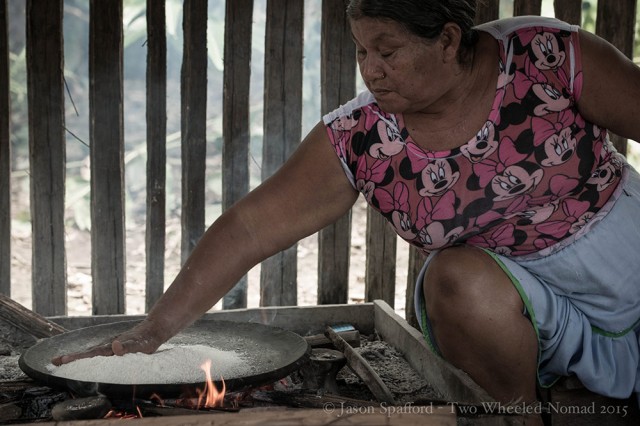 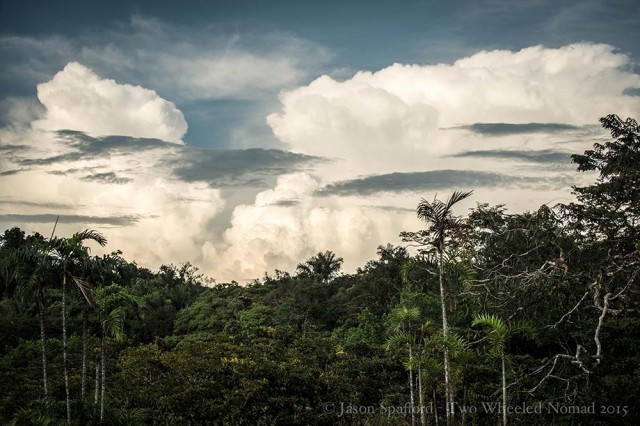 Dawn spilled through a labyrinth of trees: ferns, ancient kapoks, palms and strangler figs were the ones I’d started to recognize. I awoke wide-eyed at a golden veil of light that fell over me and washed by the drowning noises of the forest. The dew silvered the spiders’ webs that draped the lodge’s wild garden. The morning greeted us to the flap of a long nosed bat and gentle flurry of notes from Luis’ panpipes, our breakfast call. The previous evening’s brown scorpion—stuck to our shower curtain like a brooch—had scuttled off. Wafting away a pair of carefree wasps with stingers the size of nails, we clambered into a small wooden canoe and off three of us paddled into the watery wild. Sandwiched by jungle dripping with creepers. Mist fondled the surface water as we forged our way through the creases and folds of the forest’s labyrinth of watery highways. A distinct and rapid tap-tap-tap, tap-tap-tap ensued. I had no idea that a thick, spongy bone buffers a woodpecker’s brain—befitting a lifetime’s worth of hardcore boring with its chisel-like bill. Now there’s a bird that can’t turn around to its partner and say, “Sorry darling. I’ve got a headache.”

A rarely sighted ringed woodpecker appeared to have fed well that morning. He was happy to perch on an old gnarled ceiba and cock a bright eye at the curious comings and goings below. At a stone’s throw, we spotted: an alpha male capuchin monkey intercepting food from its young; an inverted two fingered sloth, keeping a sharp eye out for its arch enemy, the harpy eagle; and a Hoatzin—less affectionately known as the ‘Stink bird’; natives loathe their rotten-tasting meat but love the delicacy of its eggs. 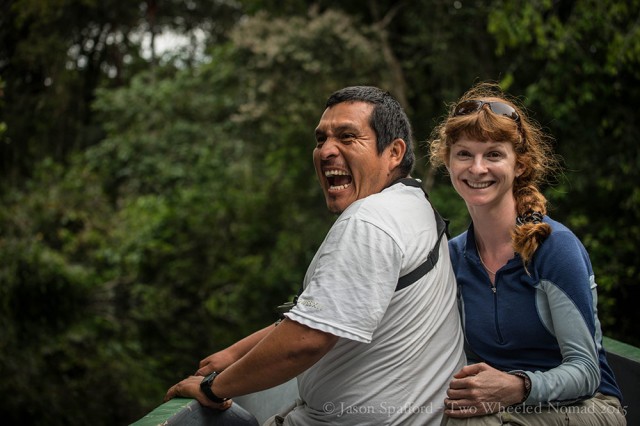 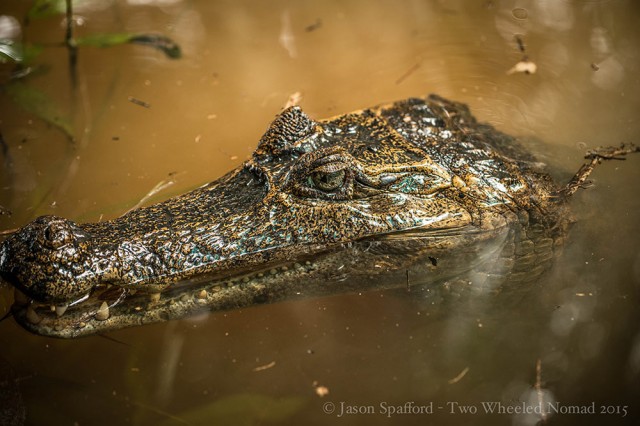 A troop of mocha brown woolly monkeys, including a pregnant mama seated on the mid branches in the tree tops, stared intently at us—wondering what we’d do next. Their prehensile tails facilitated the movement and dexterity of a fifth hand, and boasted such Olympian level agility, I was simply awed by their ‘blink and you’d miss’ nimble movements. I turned suddenly and looked left; vying for my attention was a three-metre pink river dolphin, popping up momentarily for a bubbly breather. Directly below a pygmy kingfisher swooping down over the water.

A seemingly sedate spectacled caiman came to the water’s edge, lured by Luis’ ‘educational purposes’ bits of bread. Those beefy reptiles can emulate a floating log better than a floating log. A native woman once encountered a particularly aggressive caiman—seconds away from taking her. Hoisting her spear-pointed canoe paddle, she plunged it into the soft spot on the caiman’s head before he could steal the claws of victory. As menacing as the reputations preceded such crocodilians, the one metres away from our lodge was as placid as putty. Despite being terrorised by biting insects in bloody hot pursuit of it; I would’ve been on the brink of madness.

Stepping foot into the Amazon rainforest by dappled daylight is a world apart from its exotic experience at night. I was too human to absorb the significance of everything engulfing me but tried to drink in the enrapturing benefits of it all. A tenant-loathing tree grabbed my attention when I learned that it sheds its skin every year or so, in order to cast off anything parasitic. The natives refer to it a selfish tree, although I preferred to think it was ‘survival-chic’. I meandered further along the forest floor and met a walking tree. Sounds like a scene from Lord of the Rings—but this tree was literally capable of upheaval, putting down new roots and moving 20 centimetres about every 20 years. Por qué? To remain in an optimum position, alive and kicking. Well, it’s more of a snail-paced stroll.

The Amazon has to be one of the most exuberant places on Earth, a place some people still get to call home. Upon entering a native village Puerto Bolivar one day, I got to glimpse a life so simple, so achingly beautiful that I couldn’t stop staring: a laughing child waving at a canoe, a local woman gracefully throwing yuca flour on a hotplate. A timeless charm. Each little thatched lodge we passed, nestling amongst its banana palms, drenched in sunlight, was a vision of Eden. A vision of happiness I wanted to keep. Surrounded by the Amazon’s wreath of wildlife, the forest was starting to get at something very deep in me. How on Mother Earth would we leave?

The Amazon’s orchestra of organisms—comprising en ensemble so concentrated in one given location—is, well, beyond wild. The air is permanently alive with cicadas; in harmony with a pacifying symphony of tropical birdsong, which paints the air with colour; magnified by growls from the howler monkeys; and a bit of base from the bull frogs. We absorbed an assembly of sounds, scents, colours and the most captivating creatures on Earth; my umbilical cord connecting with the roots of the jungle so profoundly, I felt an energy like no other. The hauntingly beautiful power that Pachamama—Mother Earth had over us was simply a given. Mentally spent from over-stimulation but craving for more—is how one will leave the Amazon. A chance to perceive life ancestral of Pachamama and forest nature—it’s all here in the lungs of the planet but despite wanting to feast our eyes on it all, we only saw a finger monkey’s breadth of it.