My motorcycle to me is many things. She’s so much more than my trusty steed; she’s my home, an unbelievable icebreaker, a ‘Get out of jail’ free card and sometimes a swift little lifesaver. She is decidedly my ticket to travel, enlightenment and empowerment. Without her, I’d have a gaping hole in my soul, a chunk eaten away like the hungry bite of a sandwich.

The beauty of having your own wheels means my partner and I executed our own daily sorties in the Atacama desert while using San Pedro as a base. Our first self-facilitated foray into Atacama’s sandpit took us to Valle de la Luna, Chile’s Valley of the moon. I’d clocked the coaches carting around the day-trippers but thankfully the park was big enough to disperse everyone adequately enough. Its resemblance to the surface of the moon was remarkable, owing to its different stratifications and salt formations. 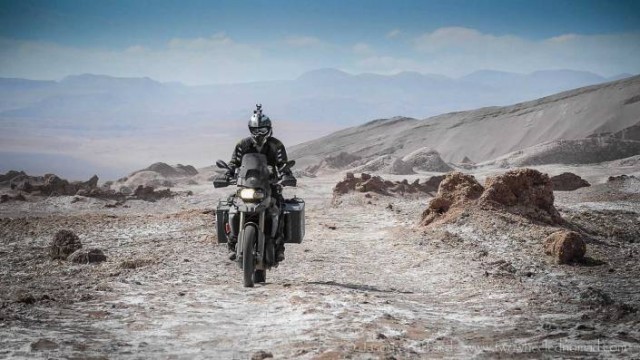 We took ourselves on a cruisy circuit stopping when the urge took us; sauntered over the odd sand dune, bobbled over the bumpiest salt-stiffened road to date, siesta’ed in the sun after our sandwiches and indulged in a light read. It was motorbiking bliss. I overheard one young woman who, after completing a guided walk faced her tour guide and exclaimed, “Well that was absolutely not boring!”

A bit deeper in Desierto de Atacama took us to Laguna Cejar and Laguna Tebinquiche. The first one was located near Ojos del Salar, a pair of sinkholes whose circular outlines were crystallized in salt a bit like the way a cocktail glass is sugar-frosted; puzzlingly positioned in the middle of an expanse of vast volcano lined desert. It was like looking down into two pools of mint green liqueur. Laguna Tebinquiche was a lagoon whose resident flamingoes had taken flight elsewhere although the puna plover birds were in attendance. I’d packed a pannier with my swimmers to see if I had the backbone to float in these salt-dense waters; turned out only my big toe had wanted to make a splash while my back was contented to stay bone-dry and salt-free. 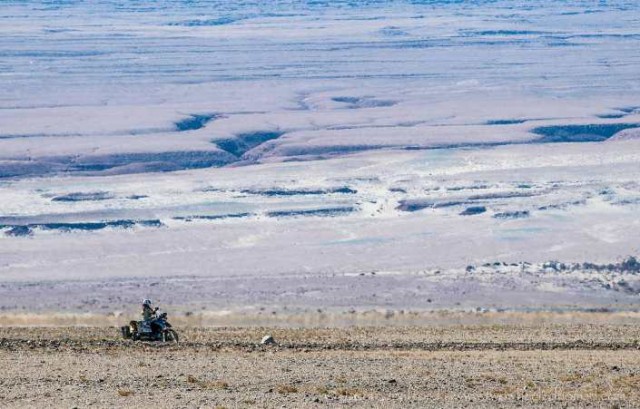 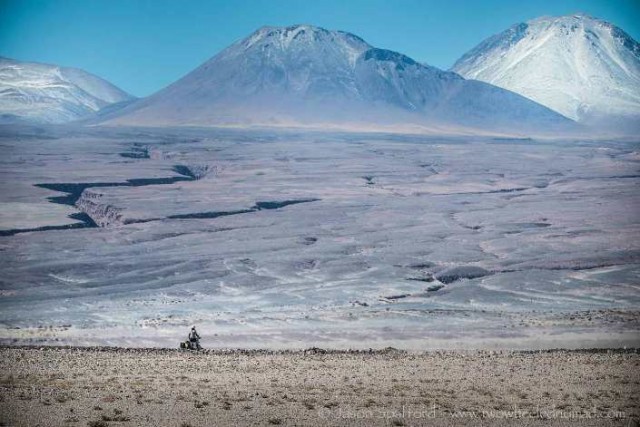 An unplanned route led us by luck to Salar de Atacama on a ride out further north. This in turn took us to Laguna Chaxa, which was about 65 kilometers from San Pedro de Atacama – one we’d been previously seeking with a fine-tooth comb but to no avail. Laguna Chaxa was home to a flamingo-breeding site! Although three of five known species of flamingoes come to feed and breed here; James, Chilean and Andean, I was content simply knowing the wading birds were there at all. They were feathered in signature coral pink plumage with their protruding bent bills filter feeding in the lagoon.

It was a day for the zoom lens and snappy reflexes alongside a first for seeing a flock of flamingos taking flight in an awe-inspiring arc – departing one lagoon to a neighboring sister pool. I lingered for as long as I could absorbing the setting like a soothing salve to a skin itch. In weaving around the potholes and patches of sand, I watched the dust devils dance to their own tune while my motorcycle sped me back to our hostel. The evening’s supermoon was about a third brighter than other moons made fractionally bigger too from being a bit closer, thanks to a fairly uncommon courtesy of its elliptical orbit. 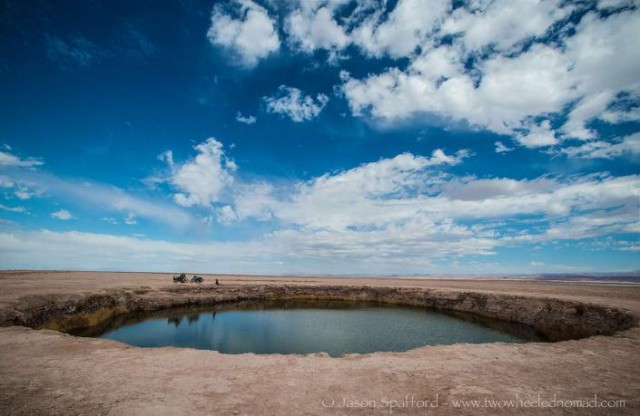 Like a gutless wimp at the start of our next sortie, I fully assumed the weak will of a wuss. Destination: ALMA. Atacama Large Millimeter / Sub-millimeter Array. One of the world’s most important international observatories ever to be built and still being built. My position? Bottom lip out at the bottom of a volcano. My partner’s inner astro-geek was determined to find this revolutionary telescope by any means. It sat on Chajnantor plateau whose surface of its antennas is smooth to within the thickness of a human hair. The security guy in front of the barrier of the main road leading straight to the observatory, tersely insisted we would be going nowhere near his highly protected pride and joy. He was about as fun as a funeral. I understood a media pass that would take four weeks to issue as well as passing a medical with flying colors, would allow us to sail through security. That was about as feasible as squeezing silver from a silverfish.

An alternative route Jason had cursorily gleaned from Google maps, which scaled a volcano would however take us to our desired destination. According to a sketchy line on the satnav anyway. I suppose there had to be rain before being rewarded with a rainbow. I conked out at the first sandy hurdle ascending up said volcano. No road as such marked the map, we were simply scrambling up sandy tracks that suggested a way toward its summit and ALMA thereafter.

My motorbike’s front wheel, like my first realization sunk in without solace; I knew where I stood with the ripio, my ‘good to me’ gravelly friend. There was only a trace of loose gravel in sight. I therefore had to battle against a lack of skill to tackle this sandy travail. It was standing in my way with a certain connivance. After a prolonged moment of doing nothing, my partner sat back and patiently waited to let me figure it out. It was difficult to absorb his advice in my indignant state and under-qualified approach towards sand.

I was flooded with a buzz once I got going, albeit an adrenaline laced shaky one. Admittedly I’d pondered too long and some ‘snotting in protest’ down the helmet’s intercom later, it was well worth the irrational fear I’d harbored but managed to relinquish. We carefully meandered around the volcano’s rough and tortuous edges, treaded over patches of snow and eventually reached a height on a par to Everest’s base camp. Over 5,200 metres in sub-zero temperatures but my my, it was beautiful up there. I felt vulnerable, dizzy at quite a torturing altitude and high on elevation.

Just a few hundred metres from reaching the observatory, we met a barricade of sand. As someone that wasn’t a seasoned sand-rider, we were forced to turn around. On the return trail back, a smattering of smugness seeped in as my wheels somehow managed to avoid going down in the sand, unlike my partner filming me in anticipation that I would! Alas, we didn’t reach the desired destination of ALMA but having got as far as I had, was good enough for me. 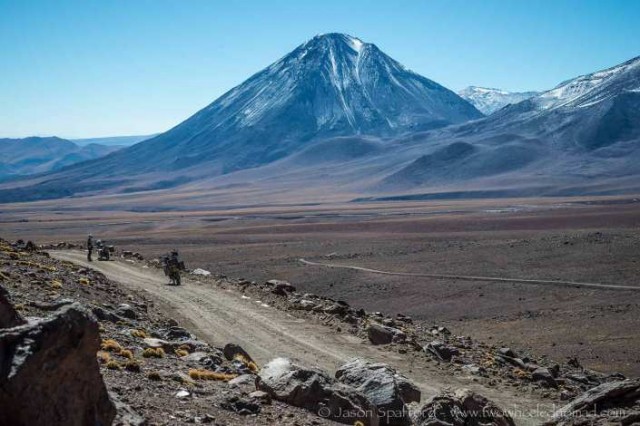 My new mantra naturally emerged: to wring out as much fun from life in the most gutsy, earthy, rollicking, lip-licking way. Philosopher Alan Watts said exactly that – let go and be hung up on nothing and I would add, by nobody.