Being the adventurous type, I have alway placed a lower priority on safety equipment, that was, until I broke my foot. It always happens in a moment, and with little warning, bouncing about down a dusty Jeep track on a KLX250S, riding faster than I should have been, making a game of jumping the bike from one side of the rut to the other. It was all smiles until the rider in front of me slammed on his brakes, me following way too close. My options, either hit him at 20mph, or hit the binders. Binders applied in force, the bike lost traction and slid into the rut sideways, my foot sliding from the peg and falling under the frame and engine case, the full weight of motorcycle and rider compressing onto the top of my foot. None of the big bones broke, just the pesky little tarsals that loosely resemble fingers under skin and muscle. It has been a few years and the fracture still rears its ugly head.

The greatest insult to the injury was that I was wearing motorcycle boots, but in retrospect, not the right boots for the type and difficulty of riding I like to engage. The boots had a descent shin guard, but were otherwise just leather and with a few extra panels stitched into wear points. They were the type of boots most would buy to ride around the world. However, my injury spurned a deep investigation into all manner of protective equipment and resulted in a head to toe correction, and All The Gear, All The Time (ATGATT) change in my outlook (except for that one flip-flop and shorts ride to the taco stand in Baja- please forgive me). I upgraded everything, but started with the boots.

Regardless of my more spirited riding approach, I am still an adventure traveler, so this means walking around dusty streets in Panama or strolling the Bazaars of Sudan. A motocross boot will just not work for my months-long trip across Africa. I wanted maximum protection, but still allow for walking a few miles and for a broad range of temperatures and conditions. All the research resulted in selecting the Sidi CrossFire II, a heavily armored adventure boot that includes a hinged ankle for walking short distances. On first glance, the boot looks 100% motocross ready, with a massive (and replaceable) shin plate, rigid armored heel and reinforced plastic toe box. Additional strike plates abound, including one for the inside and outside of the ankle, foot bridge and arch. 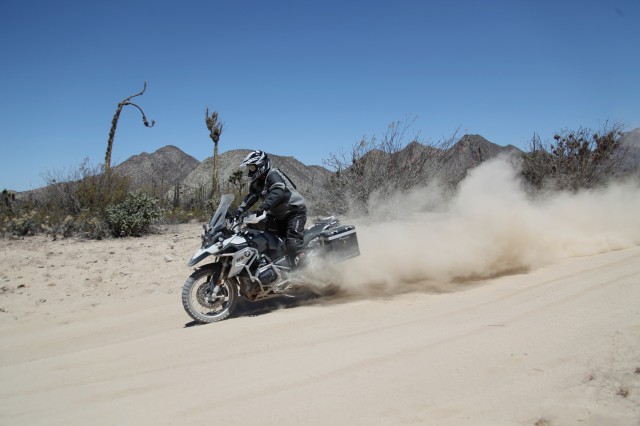 Even with all this protection, the CrossFire II is pretty comfortable. Behind the armor and hinges, there is a leather upper and a full-length rubber sole. The calf and ankle latches all have a massive adjustability range and within a few minutes was tuned to my shape. The boot also has ventilation ports and exhaust vents at the back of the ankle and calf. Even at over 100 degrees and riding hard in Mexico, the boots were comfortable. I will say that quality, knee-high socks are a critical component of the comfort, but these boots are not ovens. I also spent five days in Death Valley riding nearly entirely off-road, and the boots also took the heat and fine dust well there too. On the other extreme, I rode a BMW GS Adventure into deep snow in Utah and never noticed cold feet, although with full transparency, I was working harder than 100 mules in Mexico trying to get that bike through the drifts.

Overall, I could not be more pleased with the CrossFire II, and plan to use it for Cape Town, South Africa to Reykjavik, Iceland next year. They broke-in easily and have never given a hot spot or blister, even with a bunch of walking in Baja. The only issue I encountered with the boots was some skin sensitivity to the Chambrelle liner, resulting in a minor rash on the calf after five days riding in the desert. After upgrading to knee-high KLiM socks, the problem went away. All this expensive protective gear certainly seems like overkill, until it saves your life or limb. Buy the best and cry at the point of purchase, not in a clump on the side of the trail. . .