After a full year atop one plus bike or another, my first ride on the 2016 Spearfish Carbon XO1 felt like a homecoming. It was good to be back on normal size tires. Although it was big news when released in 2015, this year’s carbon Spearfish has largely been overshadowed by its brawny sibling, the longer travel Pony Rustler plus bike. This being the year of big rubber, I thought I would buck the trend and take a closer look at Salsa’s popular 29er built for the demands of long range racing.

Now in its second year offered with a full carbon frame, the Spearfish is unlike many other bikes in its class. More than just a svelte XC race whip, it was designed for 24 hour racing and ultra-endurance events. In that capacity it is a proven winner. The dynamic duo of Kurt Refsnider and Kaitlyn Boyle have both won the 24 Hours of Old Pueblo on their carbon Spearfish bikes. Kurt logged 288 miles in one sitting on his Spearfish to win his title. I was there to see it, and still can’t believe it. 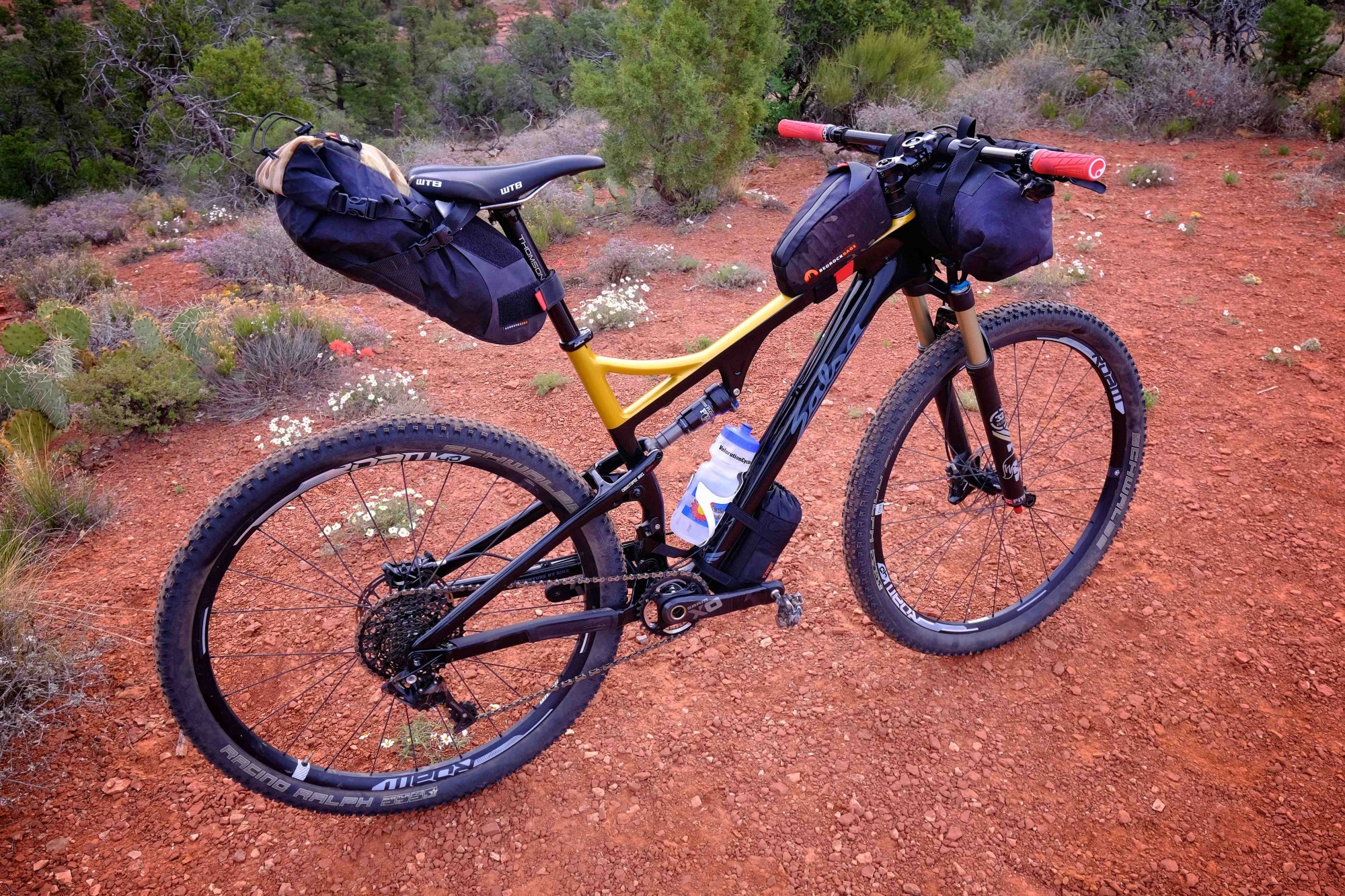 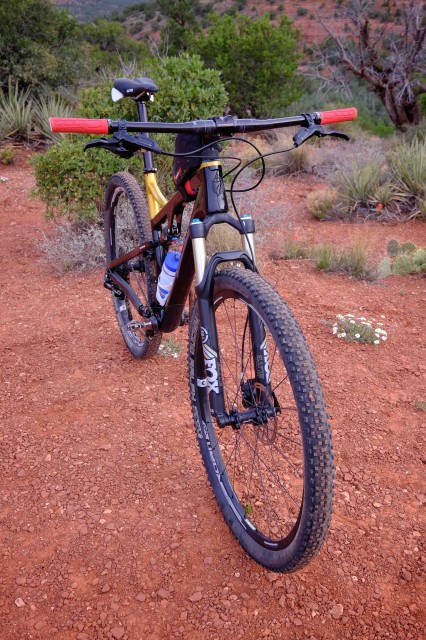 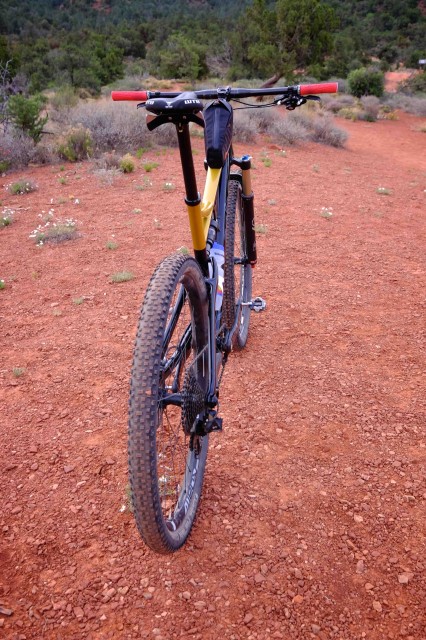 If you have never attempted an ultra-endurance event or long multi-day ride, I liken them to death by a thousand pin pricks. Rolling over little rocks, roots, and intrusions in the trail isn’t a big deal in the first few miles, but those same minor offenses when encountered at hour 22, or day three, begin to cause tremendous suffering. The Spearfish, through smart engineering and modest suspension travel, attenuates those impacts while retaining precise handling characteristics and optimal pedaling efficiency.

To achieve this delicate balance of comfort and performance, the Spearfish employs some unique attributes. The front end has the 100mm of travel commensurate with a proper cross country bike, but the rear only offers 80mm. It may not seem like enough, but many riders, myself included, swear it feels like 100mm. Much of that plushness can be accredited to the Split Pivot suspension designed by engineering maven, David Weagle.

Further adding to the mission of the Spearfish is a carefully chosen geometry. The head tube is a slack 69.3 degrees and is paired to a 51mm offset fork. This provides the rider a more confidence inspiring ride quality when bombing down steep descents after many hours in the saddle, usually at a point when synapses are fried and reflexes slowed by fatigue. To maintain a quick and nimble ride, the chainstays have been shortened over the previous all-aluminum Spearfish format to just 437mm. The result is a bike with excellent stability without sacrificing the snappy race feel. 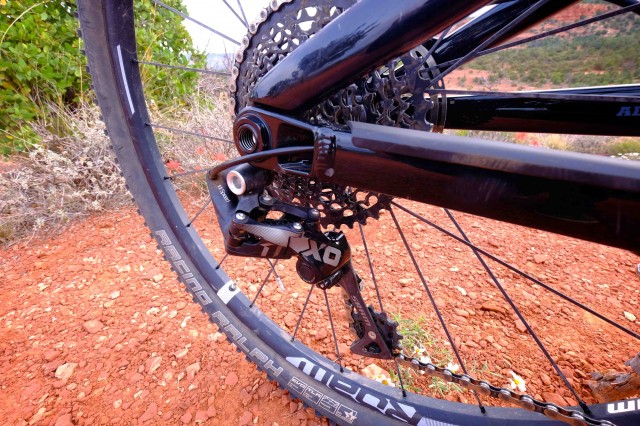 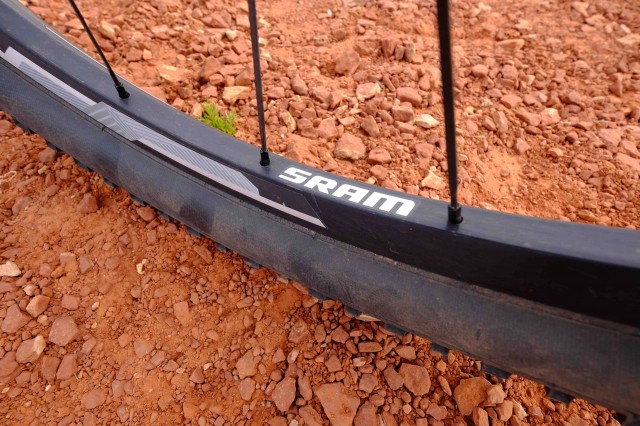 The Split Pivot suspension design is plush, predictive and easily tuned. Sram’s mid-range wheelset is a nice addition to the Spearfish with only modest lateral flex to overcome. The dual-piston Guide RS brakes have good stopping power, but need a larger front rotor for high-speed trails, particularly on steep terrain with a full load on board. The carbon XO cranks, one of my favorite in the SRAM line, look and perform great. 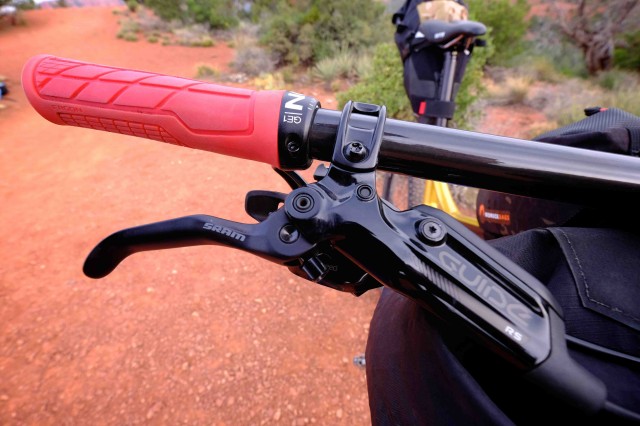 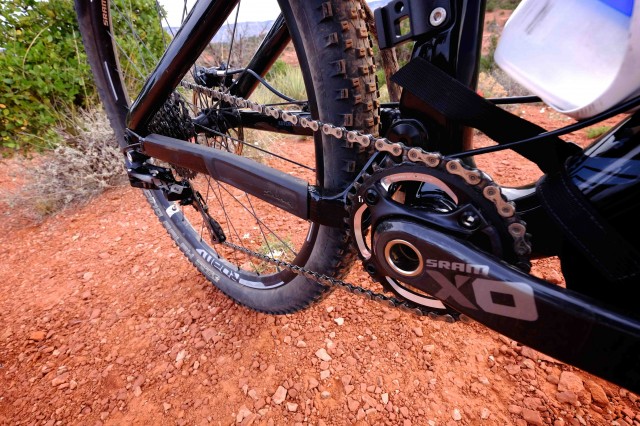 But, how does it ride?

It sounds like a smart concept, but I wondered if it would work as advertised. It only took a few rides, particularly all day sorties, to realize Salsa delivered on their promise. Out of the gate, the Spearfish feels agile and swift, accelerating quickly and carving turns with predictability and precision. I particularly noticed how light the front of the bike is, easily lofting the front wheel to clear ledges. There is a light and fast feel to the Spearfish that feels appropriate for a performance oriented bike, but it is comfortable at the same time. As the sun moves from one horizon to the other, the bike remains easy to handle and never gets twitchy or nervous.

I can’t remember the last time I rode a bike with only 80mm of rear suspension, but somehow the Spearfish makes such a small amount of travel work. I find I can stay seated even when rolling over bumps and ledges that would have my hardtail forcing me up on the pedals. When I do stand, the Split Pivot design mitigates any squatting or bobbing of the rear triangle adding to the already brisk acceleration the Spearfish is known for. 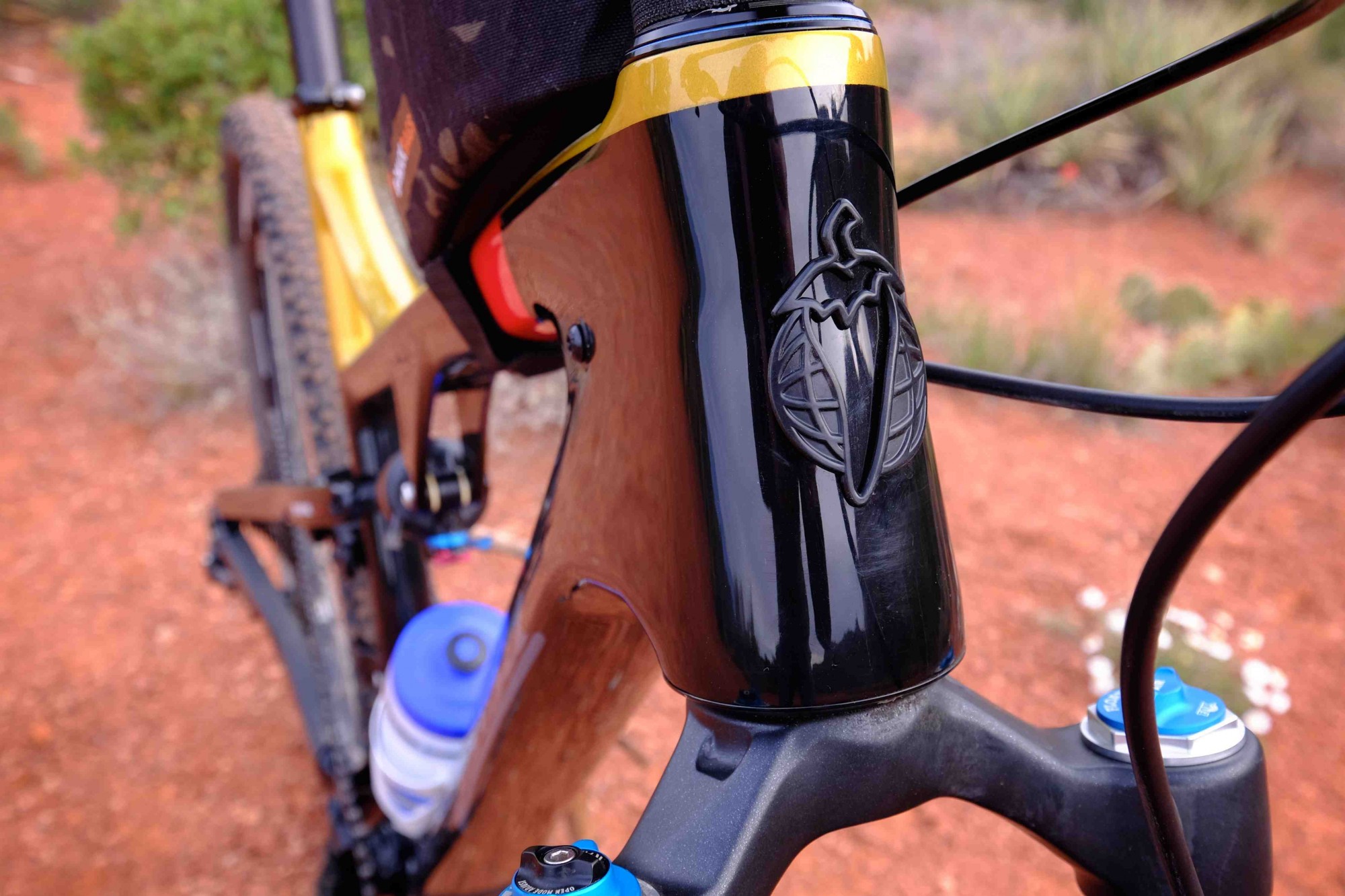 For 2016, the top tier Spearfish is equipped with a 1×11 SRAM XO1 drivetrain, a choice I particularly like. When riding rolling terrain, the one-ring setup simplifies the user interface which is a welcome benefit after several hours of continuous pedaling. The SRAM Roam 40 wheels are adequately stiff and accurate, exhibiting only minor flex when leaned into hard turns. The Guide RS brakes continue to restore my faith that the woes of Avid stoppers are well behind us, and have great modulation and power. I do foresee a swap to a larger 180mm rotor in my near future.

Overall, the build spec is well sorted tip to tail. The Fox shock and fork obviously compliment each other, and the addition of a carbon bar, WTB Silverado Race saddle, and Thomson stem and post combo round out the trimmings nicely.

At under 25 pounds, the Spearfish Carbon XO1 falls within the range of a race whip and feels well balanced, even when shouldering a dozen pounds of bikepacking kit. True to the Adventure by Bike motto of the Salsa brand, the Spearfish is a superb travel platform if speed, efficiency, and comfort are a priority. As 2016 rolls onward, I’m sure we’ll continue to hear more about all of the many bikes now available with fatter tires, but for now I’m content with my return to leaner meat. MSRP: $4999 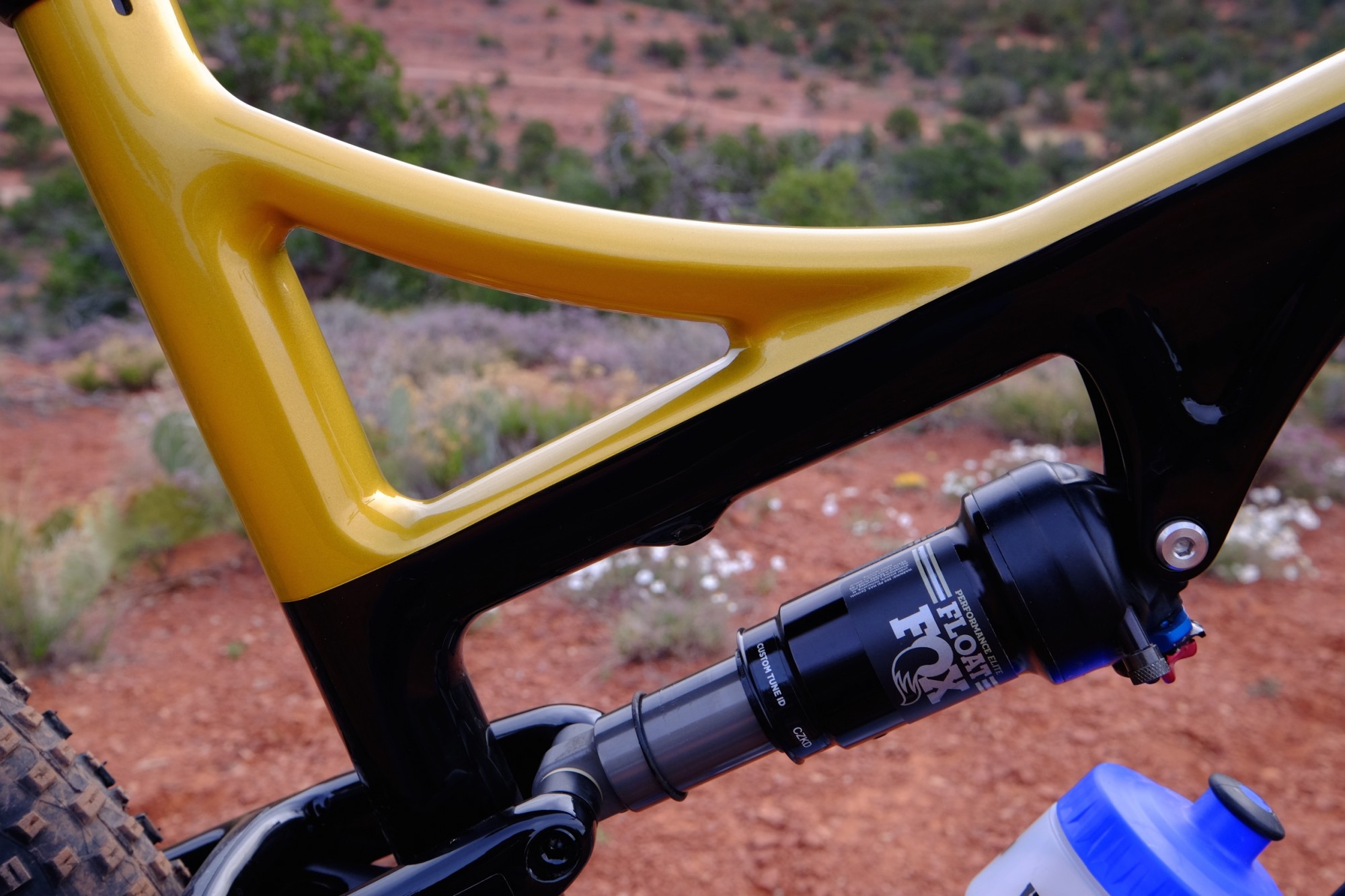 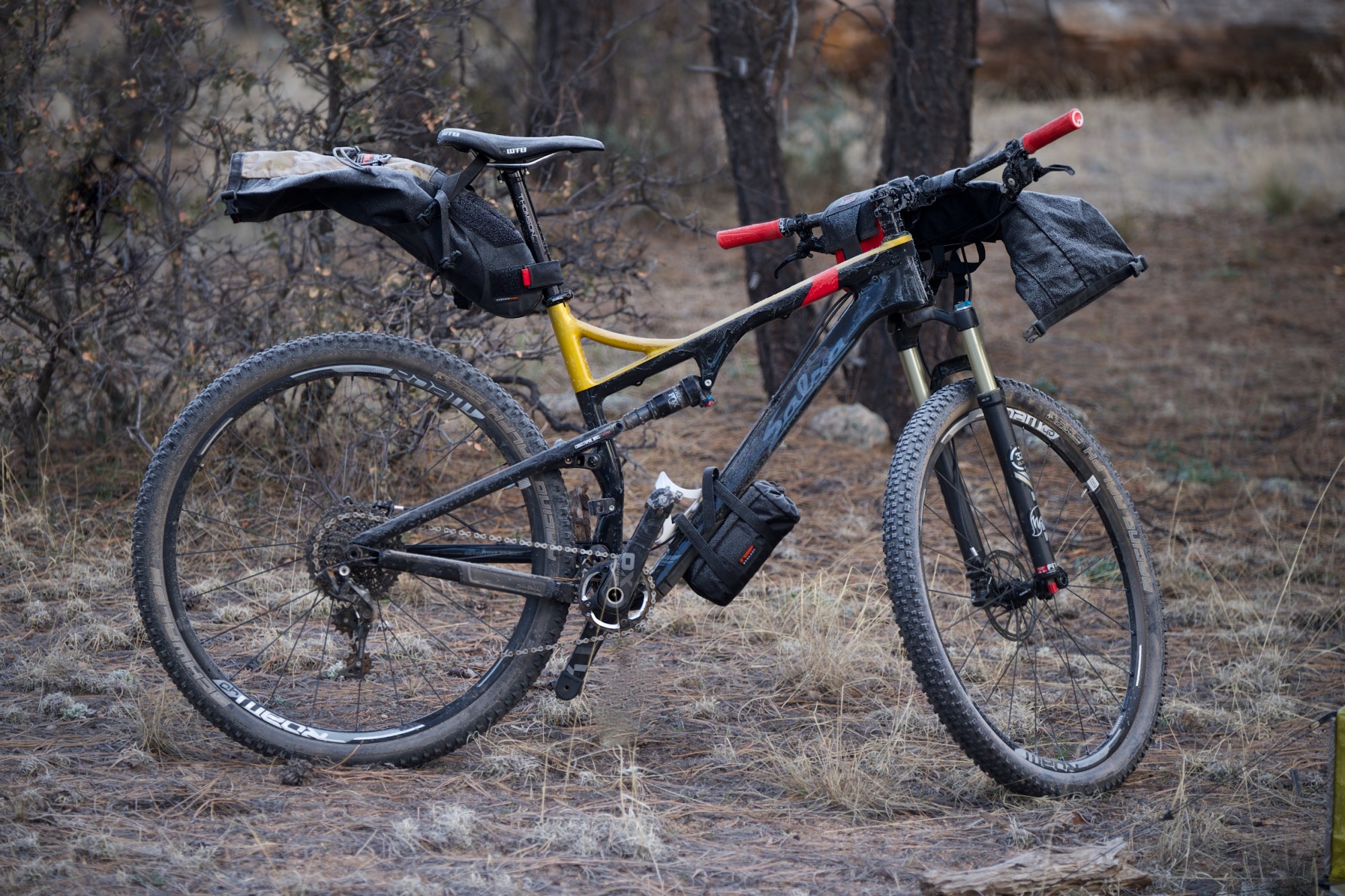 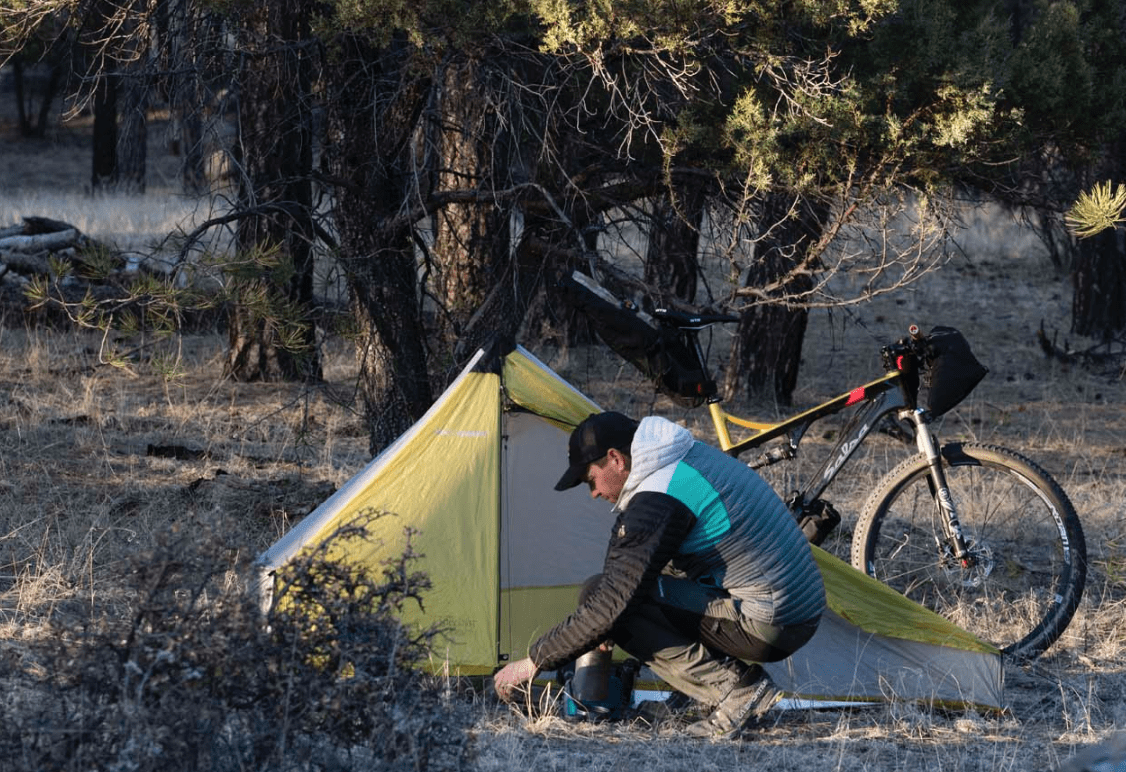 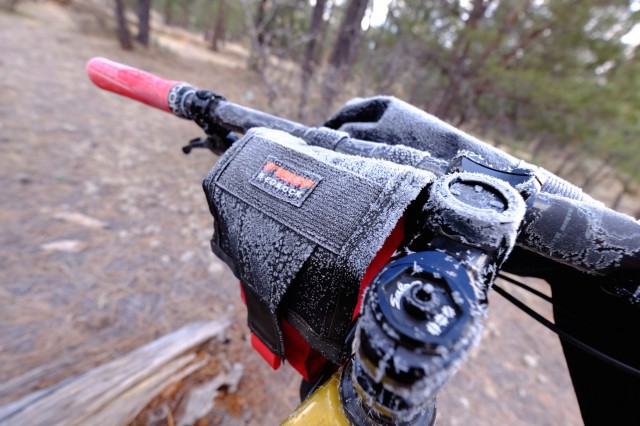 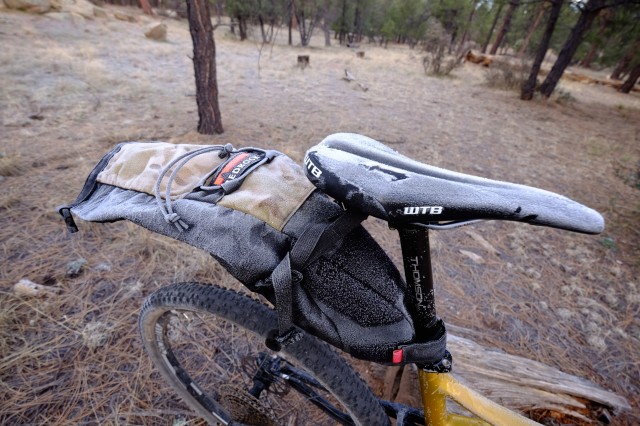 Two Wheeled Nomad: A Sublime Sortie Around the Southwest 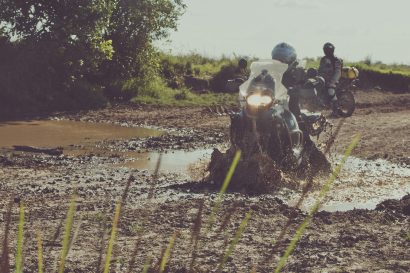 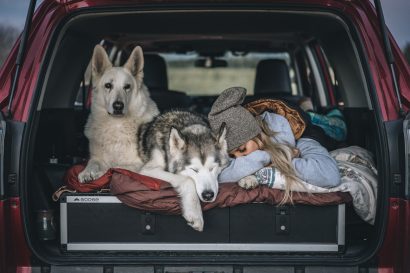 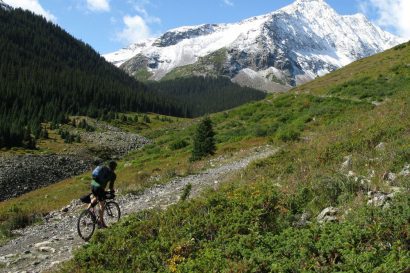