Last year was quite a year for Jeep and their flagship model, the Wrangler. That year marked the manufacture of the one-millionth JK, a milestone made even more impressive given the short production run of the model. The success of the JK can be attributed to a number of factors. Aside from being capable beyond reasonable expectation, it is cut from the fabric of our nation and is as American as John Wayne and apple pie. Unlike a pickup or other vehicle built to facilitate a day’s work, a Wrangler is like a sports car for the dirt. It’s all about playtime. Tracing that heritage back to the original offering, it wouldn’t be fair to go as far back as the military Jeeps of WWII, but perhaps a better flash-point might best be pinned to the Jeep CJ-5. If we look through the lens of today’s JK, we can see much of that original CJ-5. How much has changed over those years? Is today’s Jeep a departure from that early offering, or has Jeeping gone largely unchanged?

Everyone knows the life-spring of the Jeep resides in the early years of automotive military history. We’ve all seen M.A.S.H. re-runs, and recognize the flat-fenders and olive drab paint as the original deal. Like Elvis and his return from war, the CJ-5 also enjoyed a fruitful life after service. That first civilian-biased Jeep came in 1955 fitted with hubcaps and white walls as an early attempt to differentiate it from its military predecessors. The CJ-5 of 1955 was a very basic machine. Although part of the marketing campaign promised “new comfort,” there wasn’t much comfort provided aside from modestly improved seats and a soft-top with about as much sophistication as the cover on a Conestoga Wagon. One of the finer appointments of the first CJ-5 was a glovebox––with cover!

The real hey day of the CJ-5 didn’t arrive until the late 60s and early 70s. By 1972 the wheelbase had grown to 84 inches and special editions like the Renegade were made available with a V8 engine producing over 150 hp. By 1977 the CJ-5 was wildly successful with even more special editions hitting showrooms. The Golden Eagle edition with its iconic hood artwork was offered along side the chrome-clad Laredo edition. As the early 80s rolled around, the Jeep CJ-5 was the consummate backcountry toy. This was the early age of the sport utility vehicle with the Jeep Wagoneer and Cherokee earning their own place in history, but the CJ-5 was unapologetic in its lack of creature comforts, abysmal storage capacity, and even its potential to flop over and eject its occupants. That was all just part of the thrill of CJ ownership. The CJ-5 was so heavily positioned within the recreation segment, there was even a Playboy edition CJ-5.

As 1976 arrived, there was little doubt the rugged and no-nonsense format of the CJ-5 was a huge hit. Instead of departing from that successful formula, they simply added to it with the slightly larger, and more refined CJ-7. Author’s note: I have owned three CJ-7 Jeeps, so ready yourself for a great deal of editorial bias. The CJ-7 was ten inches longer than the CJ-5 and had a few styling elements that made it a touch more sophisticated. It was also fitted with Jeep’s new Quadra-Trac all-wheel drive system as well as a two-speed transfer case. It’s at this point in CJ history that more driver comforts entered the scene. Things like tilt-wheel, leather seats, air-conditioning, and even a fancy clock were added.  The CJ-5 would end production in 1984 with the CJ-7’s production ending in 1986.

The next evolution of the classic Jeep came in the form of the YJ in 1987. This may not have been the most awesome era as exampled by Magnum PI’s short-shorts, the Chrysler K car, and the musical stylings of Milli Vanilli. Not everyone loved the YJ, or even its new moniker, the Wrangler. All that was round in the CJ was made square in the YJ. It wasn’t a bad vehicle, it just wasn’t what the Jeep enthusiasts of the prior thirty years had expected. No matter, as it sold extremely well.  Another author’s note: I owned two Wranglers including a Sahara edition. They were clearly not CJs, but I liked them all the same. The YJ was a simple machine, much like the CJ-7. In 1997 the model made another metamorphosis and was revamped as the TJ. Round headlights returned to the facia and a few more refinements were added. It wasn’t until 2007 when the platform underwent the most extensive changes in the brand’s long history.

The Best Jeep Ever?

The JK of 2007 was a considerable departure from previous iterations of the platform. Squared off at the jaw and borrowing lines heavily influenced by the CJ-7, it was bigger than anything prior and brimming with features. To the staunch Jeep loyalist, the JK was once again, a disappointment. It was festooned with soft-touch materials, had more electronic components than many thought necessary, and didn’t seem to exude the qualities demanded by Wrangler fans. The biggest evolution was the JK in Unlimited trim, the addition of two more doors opening up the potential audience. It would be a monumental undertaking to fully describe the broad landscape of the Jeep JK in its many forms. Now fitted with pop-up habitats, pickup beds, huge engines, and a multitude of modifications, the potential of the JK is seemingly endless. They are arguably the most capable off-road platforms offered today and in stock form will amaze even the most brow-furrowed skeptics.

Within the constructs established by the CJ-5, today’s JK is still primarily built as a plaything. If practicality ranks high in your life, a JK is an unlikely companion. If your weekends start immediately at 5:01 on Friday and involve long drives into the woods by way of the roughest roads you can find, the JK is your chariot––look no further. It is refreshing to see that the round headlights and slatted grill are still part of the design aesthetic, but that’s where the mechanical similarities end. While base models with the original 2-door format are relatively inexpensive, the JK of today isn’t exactly cheap. If you opt to lavish yourself with appointments and options, a modern JK with all the trimmings can push into Land Rover pricing. All that aside, it would be remiss to say the JK of today is anything other than the legitimate heir to the CJ-5 throne. It delivers the same thrill of backroad exploration, top-down fun, and off-road performance. A few creature comforts have entered the format, but it really is today, exactly what it was then. 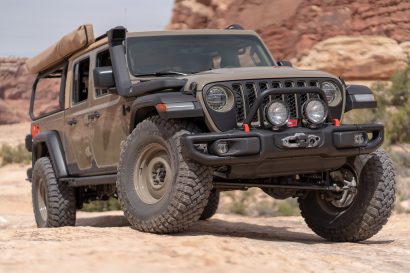 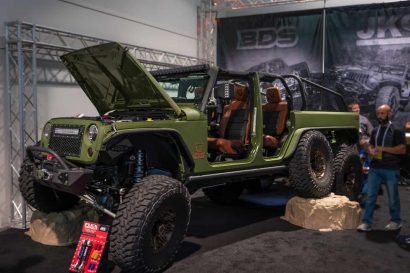