Photographs courtesy of The Rugged Road by Theresa Wallach

It was New Year’s Day, 1 January 1935, when Theresa Wallach and Florence Blenkiron sat in the postmaster’s house in El Goléa, Algeria, listening to Big Ben chime over the wireless radio. Rather than evoking a reassurance or wistfulness for home, the sounds and news from England brought forth something much more powerful.

“In my mind I could picture the crowds, culture, cuisine, concrete and folk in their hum-drum jobs at home,” Wallach wrote. “Secure in a challenging world, at a time in my life when the standard set for women was regulated by those who themselves did not live by them. I would rather grapple with the sands of the Sahara than the sands of contemporary society.”

“What will you do,” the French Foreign Legion Captain asked, “if the Hoggar Massif drifts engulf you?” It was the second of January, and Wallach and Blenkiron required the captain’s consent to continue to In-Salah, 250 miles away. When their 600cc single-cylinder Panther motorcycle became stuck in the sand, they explained to the captain, they used the trailer as an anchor to pull it out. “If the worst comes to the worst,” Wallach insisted, “we would abandon the trailer and load only fuel, water, and food into the sidecar.” The pair were determined to be the first to ride to Cape Town, South Africa, with a sidecar and trailer.

They were warned many times that the journey across the Sahara was impossible. In Algiers, a gentleman on the street urged them to change their minds. “Don’t go—it is too dangerous,” he insisted. “Friends, acquaintances, and now strangers, echoed the same old story,” Wallach wrote in her travel memoir The Rugged Road. “The Captain of the French Foreign Legion regiment at the barracks, responsible for northern Sahara… asked us how we intended finding the way to the next oasis water hole in the desolate expanse of sandy wasteland? How would we carry enough water in case of a breakdown? We answered his every question.”

If Wallach and Blenkiron couldn’t successfully cross the Sahara via a motorcycle, sidecar, and a cumbersome trailer, it was unlikely anyone could. Aside from failing to pack a compass (a mere oversight), the duo had plenty of experience riding and attending to mechanical issues. As a young girl, Wallach snuck her brother’s bicycle out of the shed and taught herself to ride. Years later, she joined the London Ladies Motorcycle Club, the International Motorcyclists Touring Club, and made history at Brooklands by becoming the first woman to win a race in which both men and women were eligible. Eight months before their departure to South Africa, Blenkiron became the first woman to break the 100 mph barrier on a motorcycle, hitting 102.05 mph on a 500cc Grindlay-Peerless fitted with a 500cc JAP dirt track engine.

The trip’s origins arose from Blenkiron’s eagerness to visit South Africa. Wallach suggested that Blenkiron go by motorcycle, to which Blenkiron replied, “Don’t be funny!” and “Would you come with me?” Eventually, they both committed, Wallach stating, “We have nothing to lose except our heads to headhunters!” 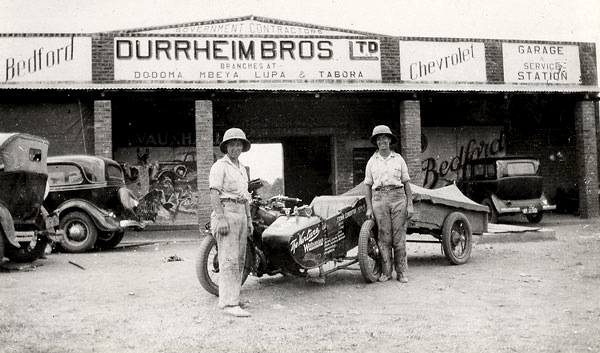 On December 11, 1934, the pair set off from West London, encouraged by a large crowd who gave the women gifts: a couple of silver horseshoe broaches, a lucky four-leaf clover, a sprig of white heather, and a Christmas pudding were tucked away. The pudding would make its next appearance nearly a month later, in In-Salah, Algeria. The women danced around the sweet dessert singing “Auld Lang Syne,” picked the ants out of it, and ate it for Christmas.

“Our narrow tires cut through the soft surface and we got stuck so many times that progress was like swimming in syrup,” Wallach wrote from the sands of In-Salah. “We knew the knack of extracting ourselves from our club competition and trials riding experience. The rope and tackle allowed us to move forward 15 feet at a time.” In the midday heat, their water and fuel rations dwindled due to dry throats and revving in low gear. “We soon began to realise the magnitude and severity of the Sahara desert,” wrote Wallach. “We were a thousand miles from Algiers, barely halfway across, but were not yet licked. Perhaps there was a reason why everyone had said we would not succeed in getting across.”

The trailer had a propensity for fishtailing, so the women wound around rocky outcrops, only to experience numerous tire punctures. Sections of the track were obliterated, and sand drifts became all-encompassing. Shifting sands erased their wheel tracks during the night. “Precious time was lost getting ourselves unstuck,” Wallach lamented. At one point, the u-coupling broke, so Wallach and Blenkiron scrounged up lugs from an abandoned car to re-attach the trailer before continuing on their way. 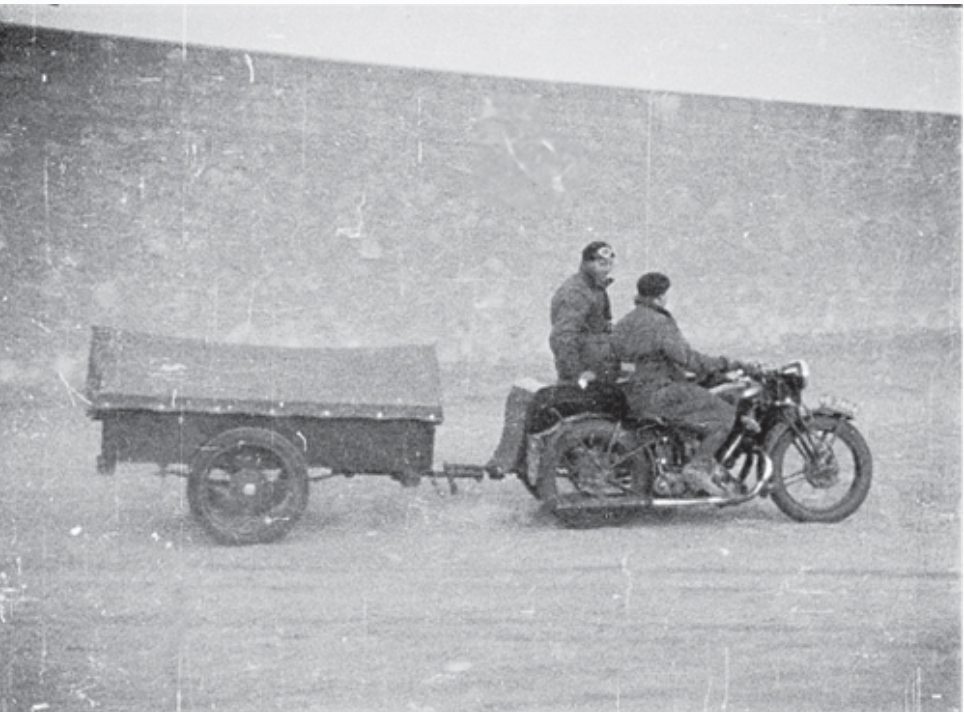 French officials in each region of the Sahara had to approve every section of the desert crossing, which necessitated a specified arrival time at each oasis. If the women didn’t arrive, a search party would be called out. The cost of the search party, if called, was four francs per kilometer, each way. “To be rescued in the Sahara was apparently not a poor person’s sport,” Wallach noted.

“In spite of its harshness, the Sahara, by nature, is endowed with its own austere beauty. As we penetrated deeper into this unearthly place our motorcycle was more than something tangible made of metal and rubber but, having an empathy like a living soul possessed of feeling, it was also quite companionable. It was our home.” – Theresa Wallach, The Rugged Road.

Eventually, with sights set on the final oasis of Agadez, the pair began their last leg of the Sahara crossing. Days marked by mirages, powdery sands, and a diet of rock-hard bread blended together. Suddenly, the sound of the motor changed. “…something clattering?” Wallach asked her travel companion. Later, she wrote, “The intense heat had thinned the viscosity of the lubricating oil and the engine stopped. The conrod bearing had broken through lack of effective lubrication.” They were stranded 100 miles from the next outpost; there was no choice but to start pushing the bike—mere days remained on their breakdown contract. 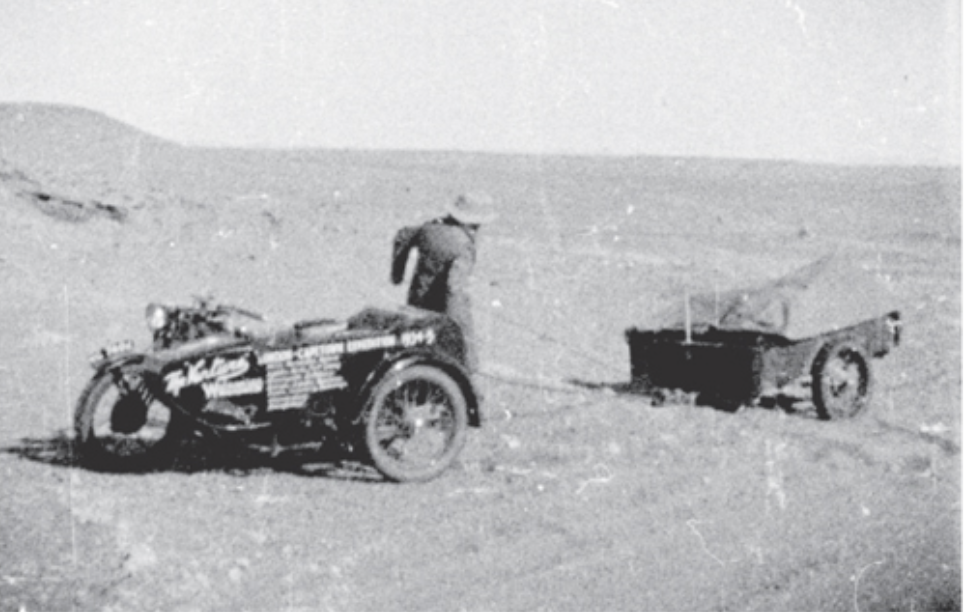 A carton once containing a bottle of whiskey arrived in Agadez, post-marked from Phelon & Moore’s factory in Yorkshire, England. Housing a connecting rod, a main bearing, and the required seals and gaskets, the box had been flown to Algiers and transported overland by a SATT trans-Saharan vehicle. More than a month had passed since Wallach and Blenkiron’s breakdown in the desert.

As the women pushed the Panther motorcycle through the desert, the rising dust caught the eye of nomads from a nearby settlement. The Chief of the Fulani tribe was notified and sent out a group of horsemen to investigate. “Using our rope, one of the horses towed us to their settlement about five miles away,” Wallach wrote. “We had reached In-Gal. If we had not pushed so far they would not have seen our dust rising.” The Chief agreed to loan the women two horses to tow them the remaining 75 miles to Agadez. They would be accompanied by the Chief’s son and a local Mission student who spoke English; the journey there and back would take a week.

“Arabs and Tuaregs gathered around us to see the strangers riding a horse-on-wheels. This was the first motorcycle to reach here—they had never seen one before.” –Theresa Wallach, The Rugged Road 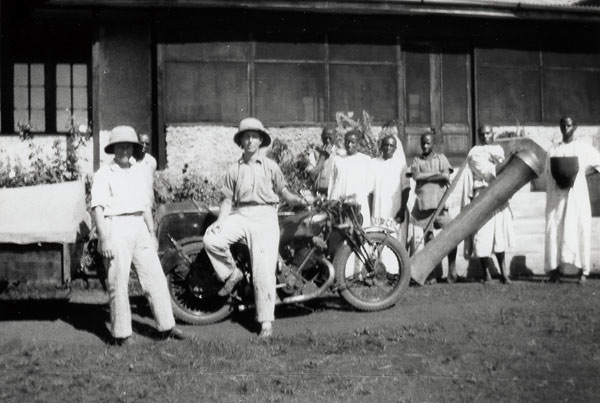 “It had taken us a month to accomplish the crossing and we reached the last oasis with only a few minutes of our breakdown contract to spare,” Wallach penned. As it turned out, the only vehicles equipped for a rescue mission in the desert were either delayed or unavailable—a stark reality that struck Wallach like a ton of bricks. If the women hadn’t arrived within the breakdown contract “…we might very likely have met the same fate as that camel whose bleached bones we saw lying along the wayside.”

To read more about Theresa Wallach and Florence Blenkiron’s journey from London to Cape Town, The Rugged Road can be downloaded here.