Full of Christmas Turkey we left our home in Derbyshire, United Kingdom on December 25th 2014 and headed South for a one night stop over with my wife’s parents in Cambridge and then on the 26th a quick 2 ½ hour dash to the Channel Tunnel for our crossing; a very slick operation for anyone who hasn’t used it. Arriving in Calais, France 30 minutes after first driving on in Folkstone, England, the first two nights stay would be in an Aire (Community run camp area) in Brugge, Belgium giving us chance to spend a full day in the Old Town Christmas markets still in full swing, and chocolate shops everywhere.

Unfortunately, with the clock ticking we would need to cover some mileage to get to Copenhagen, Denmark. We pushed on through Belgium and on through the Netherlands to Flensburg in North Germany, arriving late and having to resort to an app for a stellaplatz (German informal camp area) we found ourselves spending the night in basically someone’s garden that allowed pay as you go camping. At around 07:30 an old German chap tapped on the door and disappeared, leaving two loaves of bread and instructions to pay him seven euro. There was fresh water fill up available as well as grey water and toilet disposal; We paid him his money and filled his visitors book out and then pushed on. 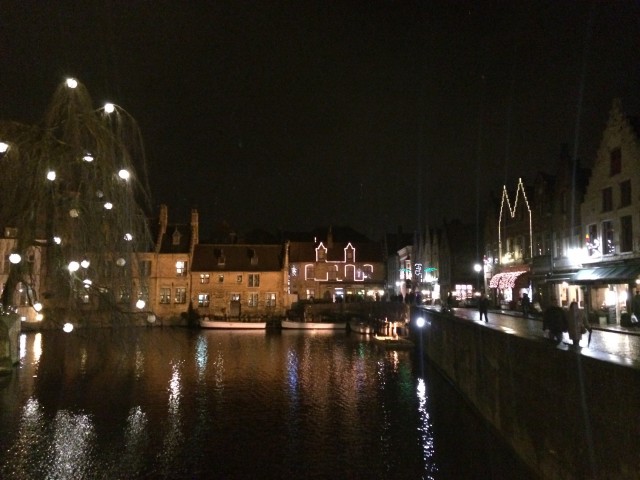 We crossed into Denmark and then one of the massive bridges, the first time we had ever had the toll operatives get a tape measure out to determine how much to charge us. Arriving in Copenhagen in the late afternoon with a couple of campsite co-ordinates, we intended to stay a couple of nights, unfortunately both were closed for the season and so after looking for a suitable sleep-over spot we ended up on the harbour, adjacent a marina. The local fisherman said we should leave early and no one will trouble us, so that’s exactly what we did.

Copenhagen was a metropolis but seemed a nice one, one we decided to return to another time to do it justice and pressed on to Stockholm, with New Years approaching this looked like a good alternative to see 2015 in. Stockholm did not disappoint. Our trusted app “pro mobil, mobillife” that a fellow traveller had put me onto dropped on a small campsite only 10 bays away, right in the centre of Stockhom a 20 minute walk from the old town. With electric hookups we could also conserve on LPG which in Sweeden seems to be found next to Rocking Horse doo doo. The Sweede’s have an alternative CNG (Methane) and little use to our Propane based heating system. 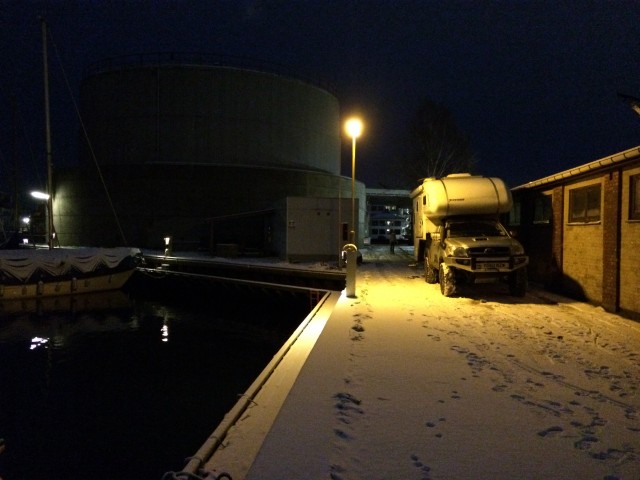 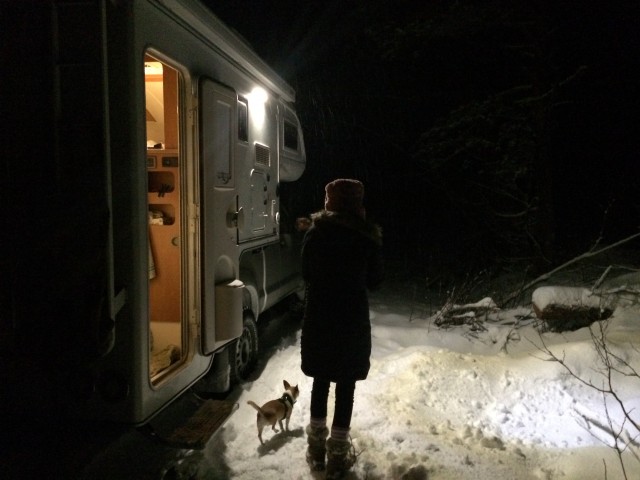 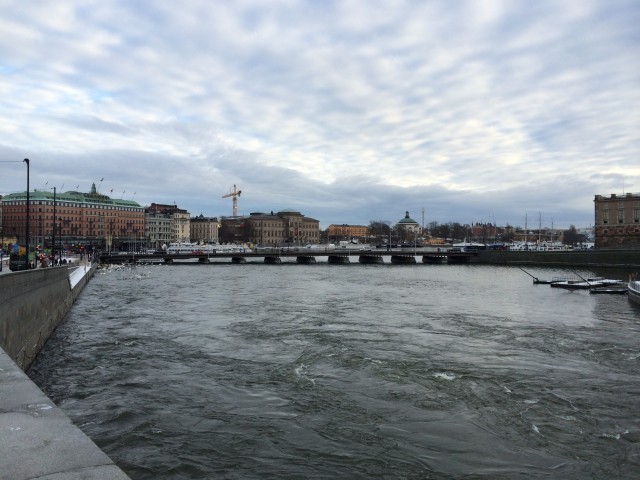 After 2 nights in Stockholm we headed north up the East coast to the Gransfors Axe factory, well known for being the Cream of Axes it’s well worth a visit, there’s even a throwing board, sort of like darts only possibly more dangerous. 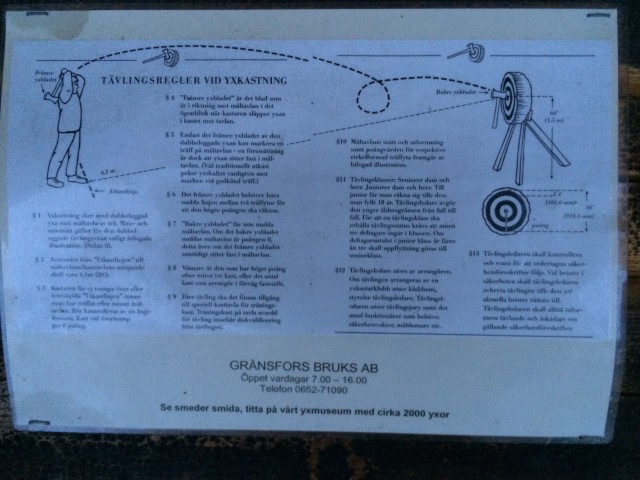 A night wild camping in the forest with not a sole for a good few miles was excellent and 6 inches of snow wasn’t troubling the Toyota at all, not even with our accommodation on its back.

From here we headed west for Trondheim, Norway and then a couple of ferry journeys to Austratt where in WW2 the Germans had taken a gun from a damaged battle ship, the sister ship to the Bismarck I believe. They had then built the gun 5 storeys into the mountain to watch over the surrounding area. Given the effort we had made to get here just to see this beast, one can only wonder at the efforts that were involved in getting it out of a battle ship and sinking it into the mountain in such a remote and barron landscape.

From here we headed North only to come south again. It would avoid us using the ferries and allow us to pass through some amazing vistas, think CS Lewis, Narnia and your about there. After another wild camp at the edge of a forest we dropped down to Kristiansund and headed on the Atlantic Coast route to Molde, this road or rather a 20 mile stretch is famed for Audi Car adverts and a like. 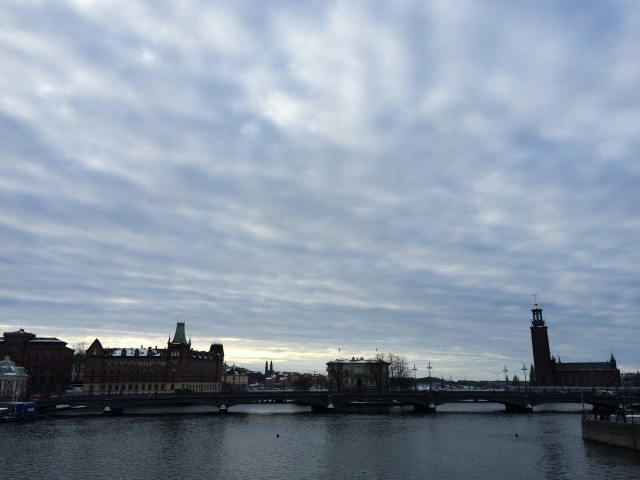 Was it worth the effort? Oh yes, given the time we would have driven it the other direction just for the hell of it but unfortunately time against us we pushed on South to Bergen. 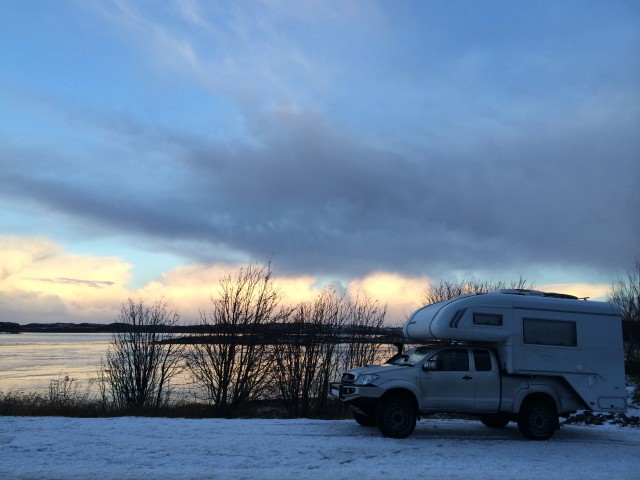 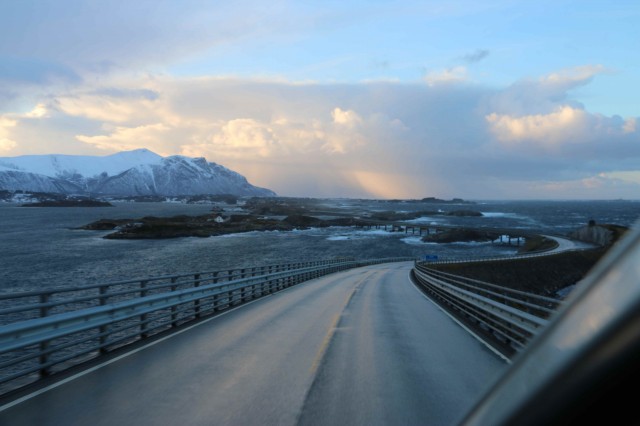 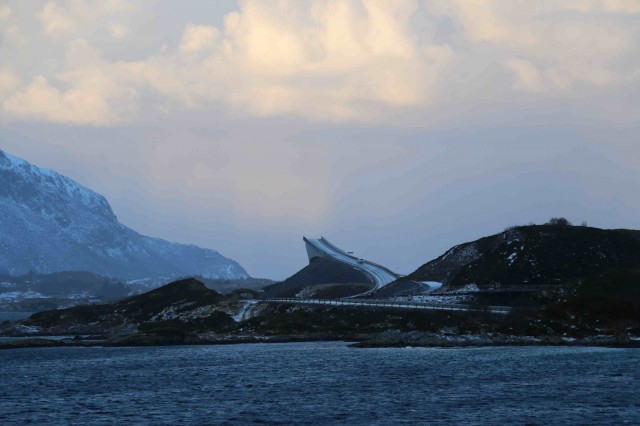 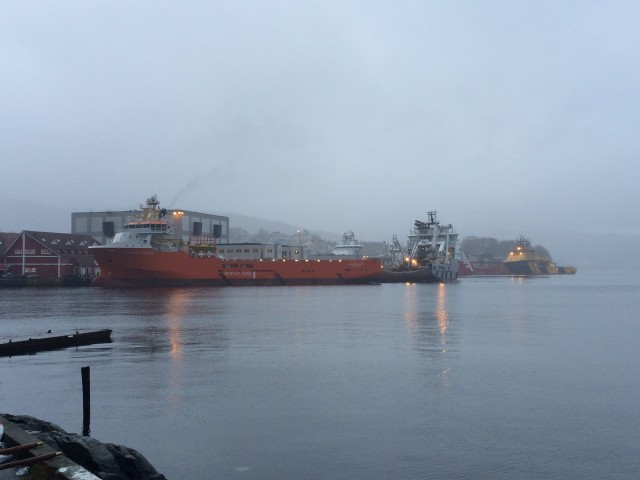 We were told we would like Bergen, with its old town frontage onto the harbor. However, we did not. Our height ruled us out of most car parks. Making this a drive through visit, the offshore Oil and Gas industries obviously play a big part in the economy and the mega oil rig service ships gather in the commercial harbour.

From Bergen still pointing down hill we called at Oslo where we stumbled upon a cluster of maritime museums, not usually our thing but when in Rome and all that. This area of Norway is riddled with Road Tunnels, average length 8km but some upto 23km long, it’s worth registering online with the AUTOPASS system as many Tunnels and roads are toll, but not too expensive. The AUTOPASS system means you don’t have to stop, cameras identify the vehicle registration and the Toll is debited from your registered credit card. 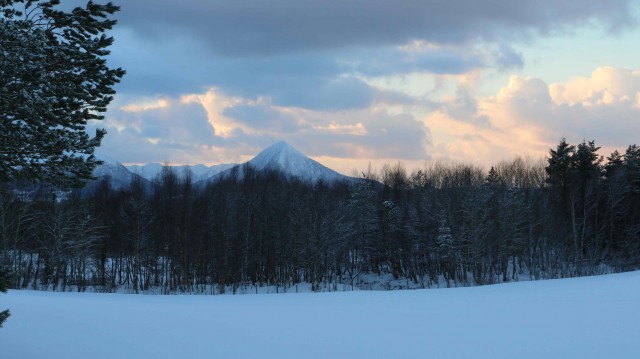 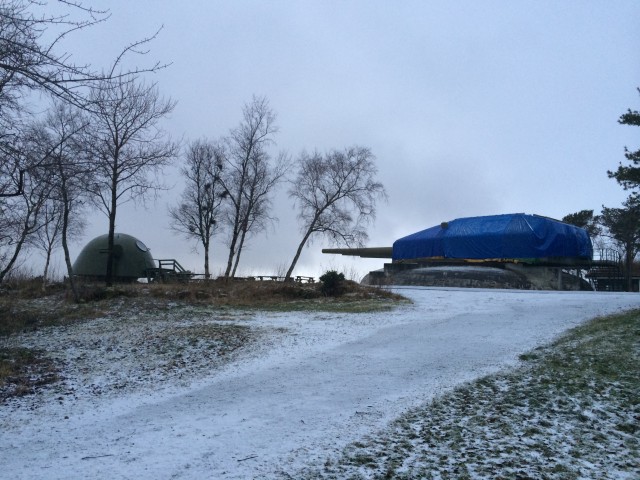 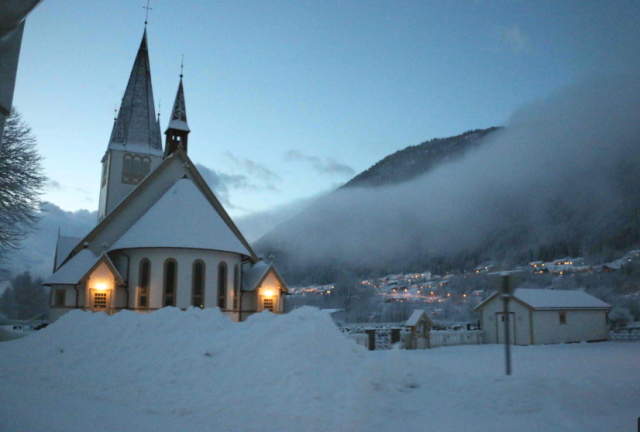 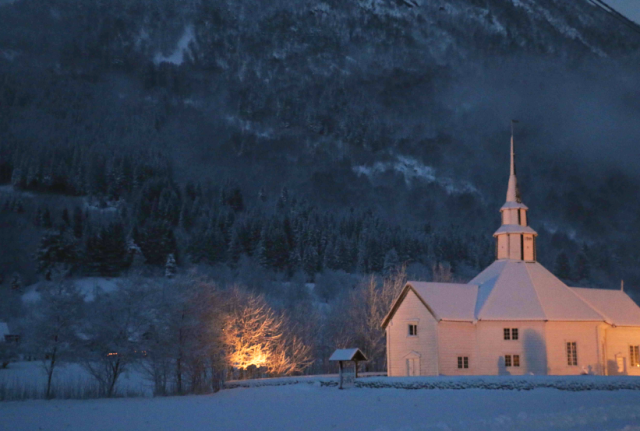 Oslo to Gottenburg was a grind, my wife had been complaining of ailments and by our evening stop in Gottenburg was starting to give cause for concern. I go the iPad out and discovered the international airport was 10 miles away. There was a seat available in the morning to Stansted airport, UK , a stones throw from her parents, so that was it a couple of clicks later and it was the Chihuahua and I left to cover the big mileage home, not something I was looking forward to as there was also the “pet passport” scheme to negotiate. Adding to the potential bureaucracy was that France was in the middle of an anti terror lockdown so I didn’t really know what to expect at customs. Needless to say the paperwork for the dog wasn’t too much stress and only a slight delay at customs saw me back in blighty,(UK) and on my way to being reunited with the wife who had made a miraculous recovery having done in 2 hours on an airplane what took me a further 4 days to cover. 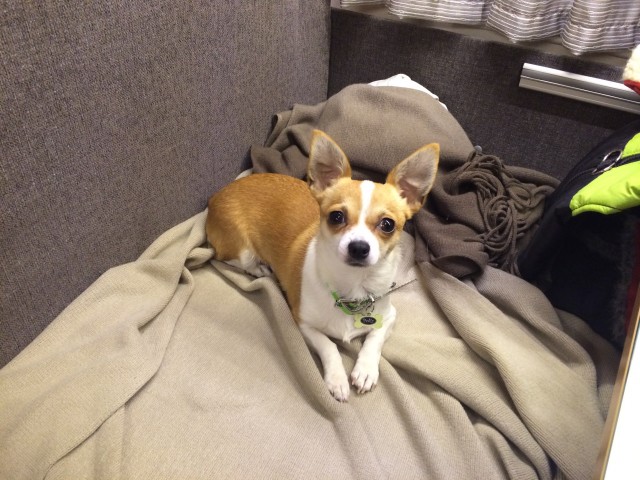 Lasting thoughts, when can we get back to Norway!

VB air assistors on the rear with individual control left/right, dedicated compressor( I would very much recommend these for ride stability 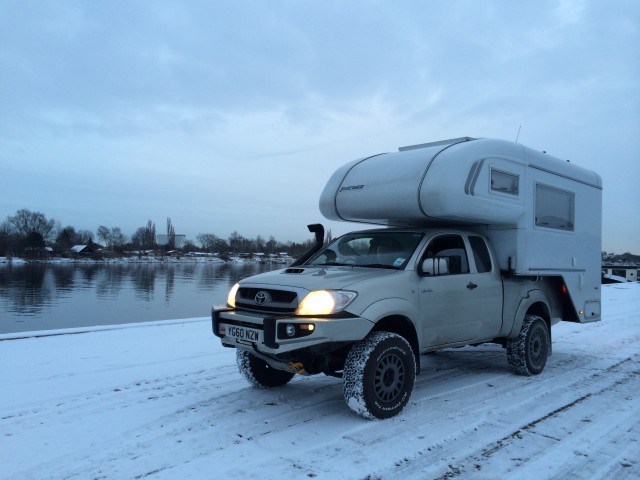 2x LPG bottles which can be refilled at most fuel stations in Europe without removing or exchanging the bottles.

Honda LPG powered 2000w Generator, powered from an output on the cabin. 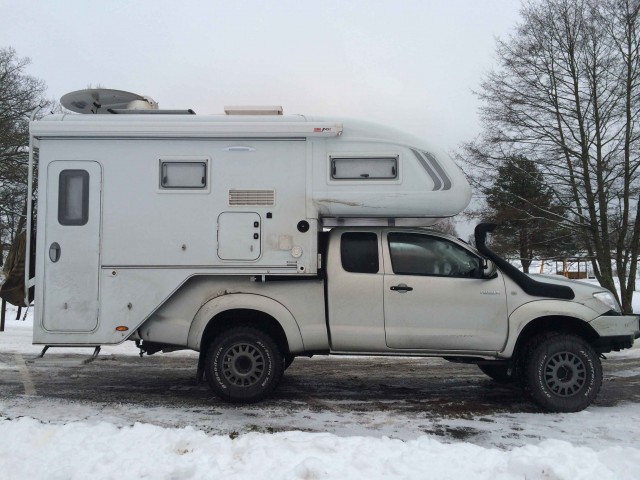 My wife and I had done the roof tent thing on the top of a Defender 110 and decided that in our old age, well middle age that we wanted a few more comforts. A trip in 2013 to the allrad, Bad Kissingen show in Germany the biggest overland/4×4 show in Europe (http://www.abenteuer-allrad.de/en) helped us decide that a slide on demountable camper was the way forward for us and the Tischer in particular met our requirements and budget. What a bit of kit, from someone who a few years ago would have scoffed at such an item, I say again, what a bit of kit! 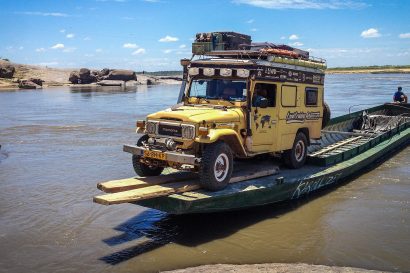 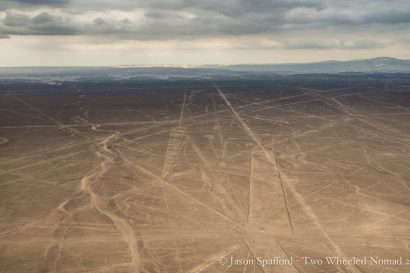 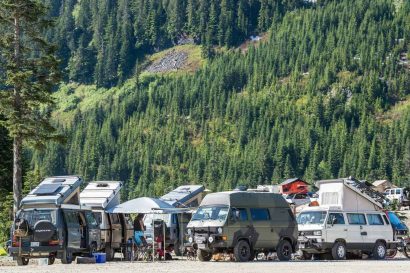