My earliest memories of any vehicle was my dad’s 240Z, the pumpkin-colored coupe firing to life as my dad worked the curved choke lever on cold Los Angeles mornings. Even being so young, I knew that car was just…cool. And my first exposure to a Nissan 4WD was on my aunt and uncle’s ranch in Southern Arizona, the 56,000-acre spread serviced by two 1960’s Nissan Patrols. The tops were long-since gone, replaced by canvas stretched over the roll bar, the rear suspension sagged to the bump stops from pulling stock trailers filled with cattle. These Nissans were formative to me as a young person, and I also remember them always starting—no matter what. 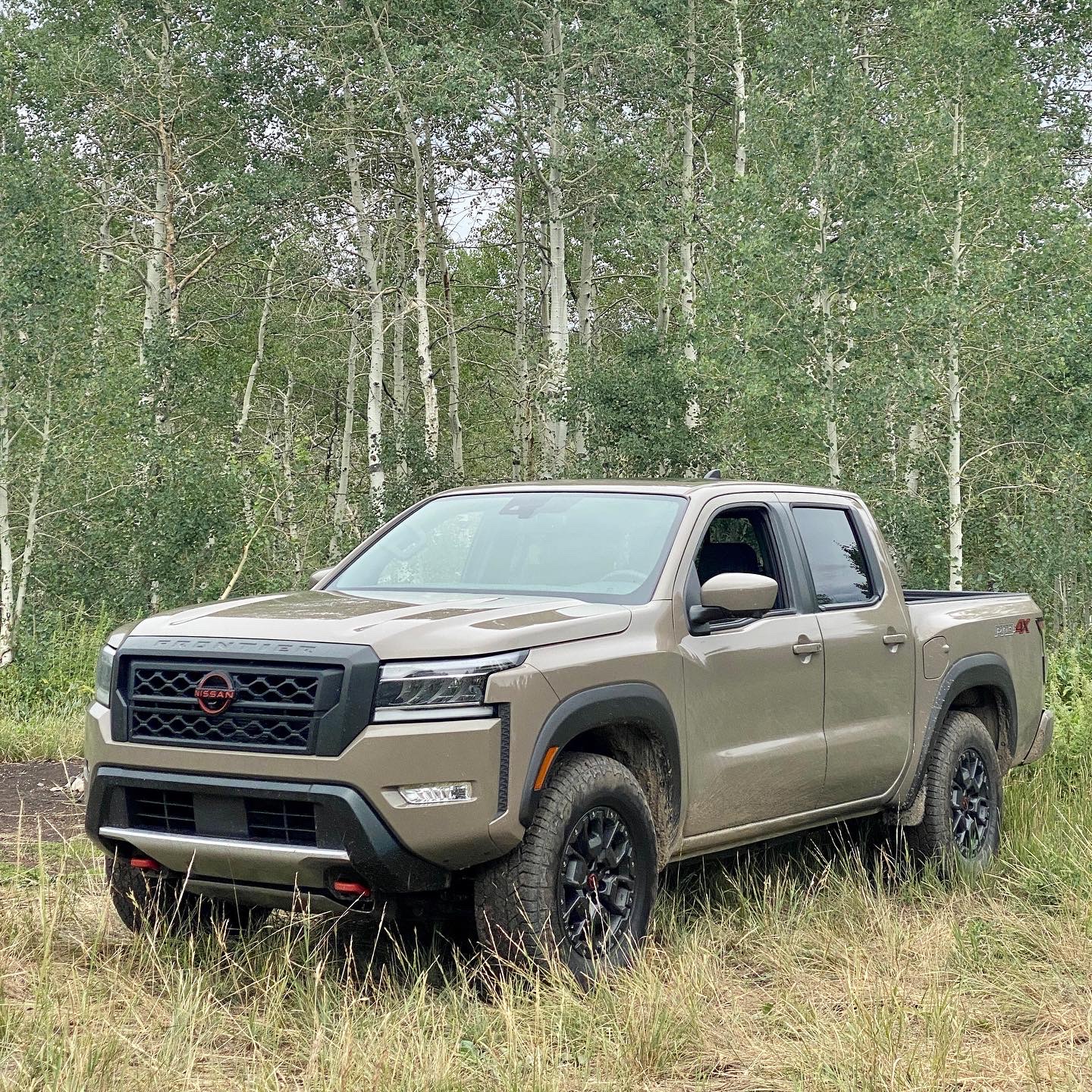 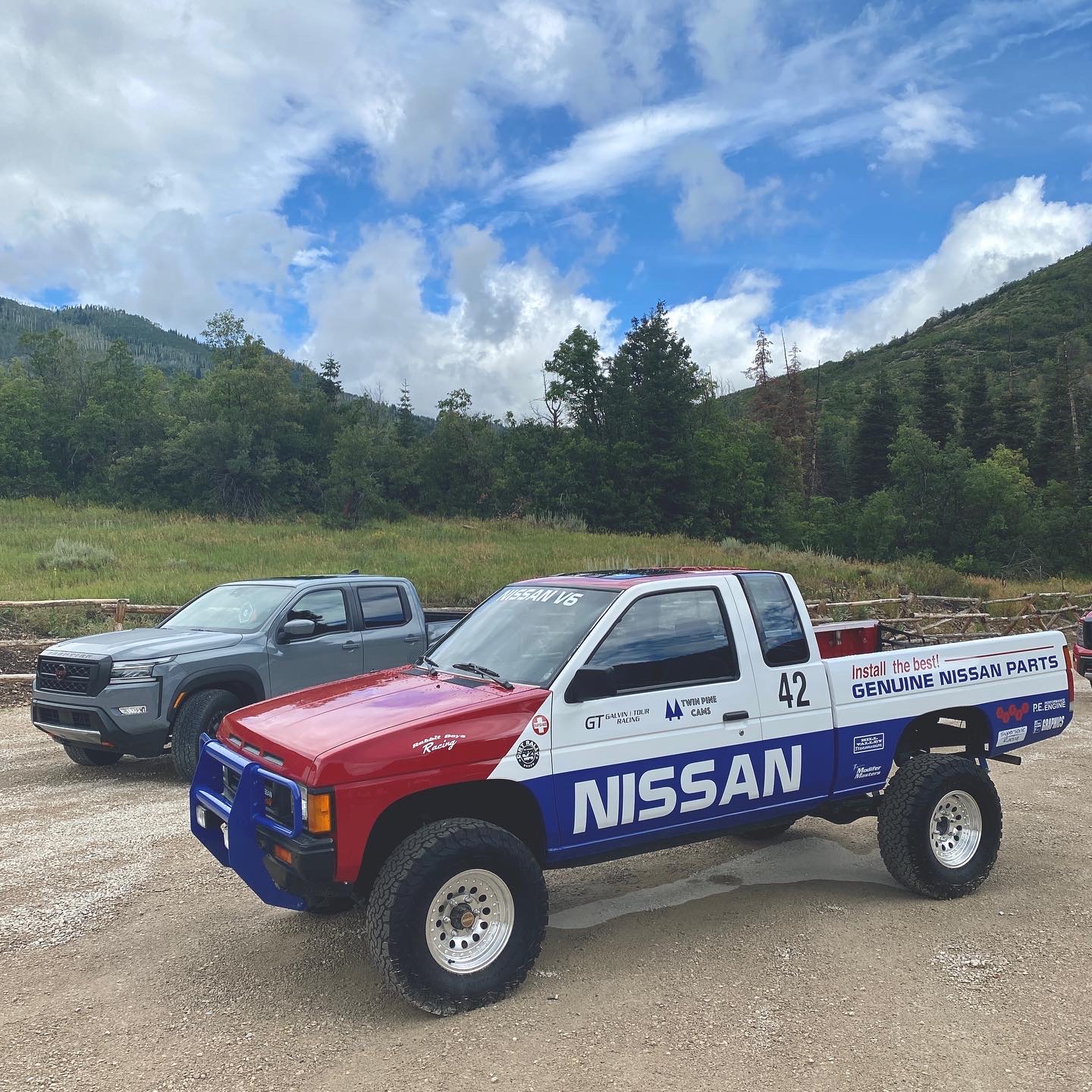 The new Frontier is a handsome truck, and shares part of the Hardbody DNA.

Throughout the decades, Nissans have been a somewhat quirky but equally charming option for North American overlanders, the first Pathfinders coming to market with (shocking) 31-inch tires and even a limited slip differential. The Hardbody followed, looking equally prepared for the backcountry. Nissan brought with the truck line several firsts, including the first quad-cab compact pickup with the 2000 model year. For 2022, Nissan has released their best truck yet, the (almost) entirely new Frontier, and we had the opportunity to drive it through the Utah backcountry. 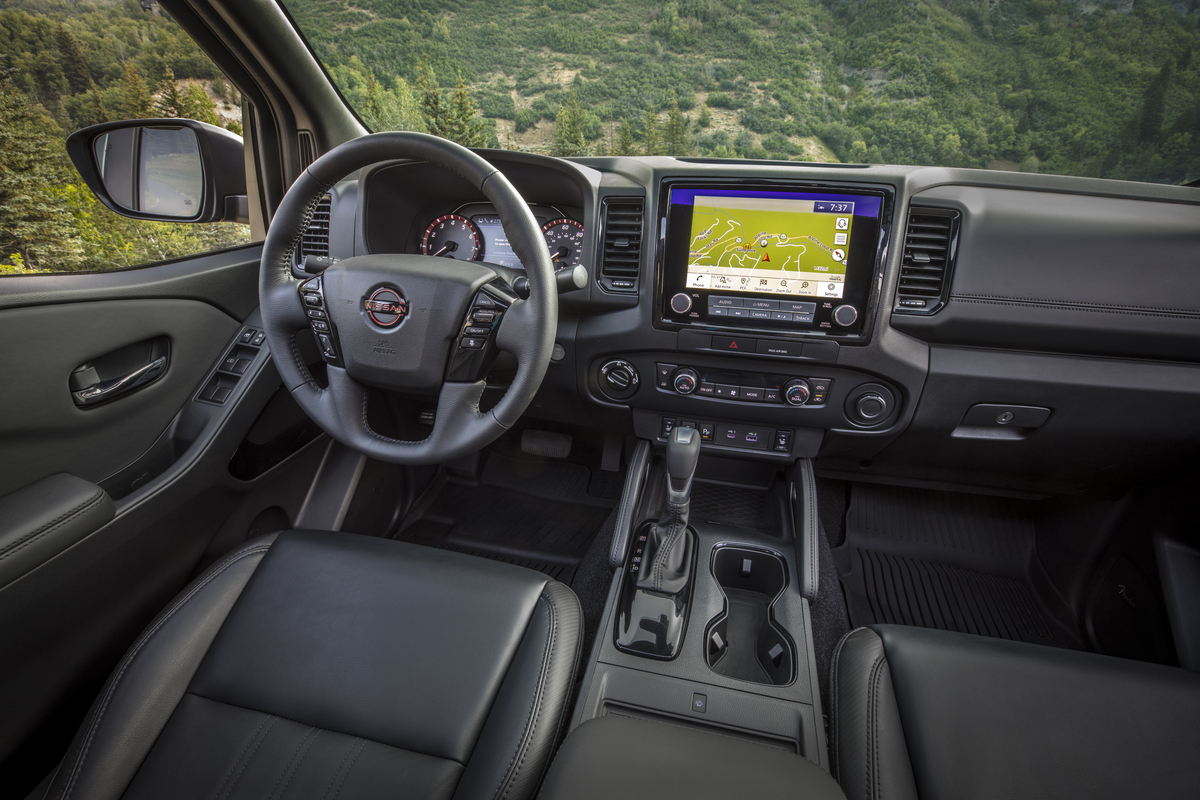 The interior is a Significant improvement over the outgoing model.

The 2022 Frontier is a mostly-new vehicle, the most significant carryover being the fully boxed frame. The engine is a best-in-class 310 horsepower V6, paired with a 9-speed automatic transmission. This drivetrain is both powerful and refined when compared to other V6 engines in the segment, greatly benefiting from the 5.4:1 first gear (66 percent lower than the Tacoma), and 281 pound-feet of torque.

The interior of the Frontier is also an entirely different experience, with the lowest NVH (noise, vibration, and harshness) of any midsize truck we have tested. This is primarily due to the hydraulic cab mounts and increased sound insulation. The materials are better, and the layout is more thoughtful and attractive than the outgoing model. The center of the dash is dedicated to the 9-inch multimedia display and the automatic climate control. The center console now has two large grab handles (a nice touch) and a robust shifter with manual mode. There is also a convenient charging pad for the phone and available Apple CarPlay. 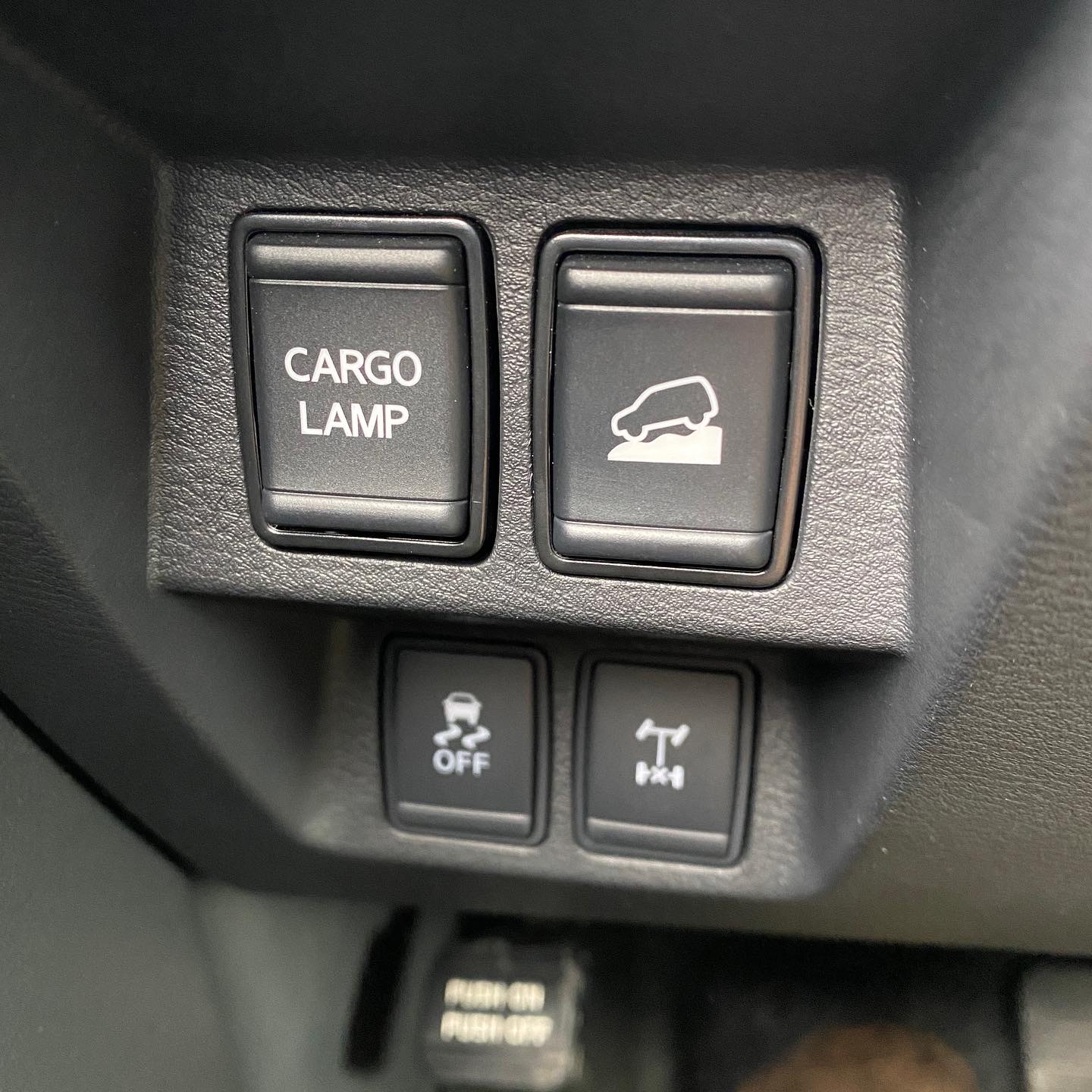 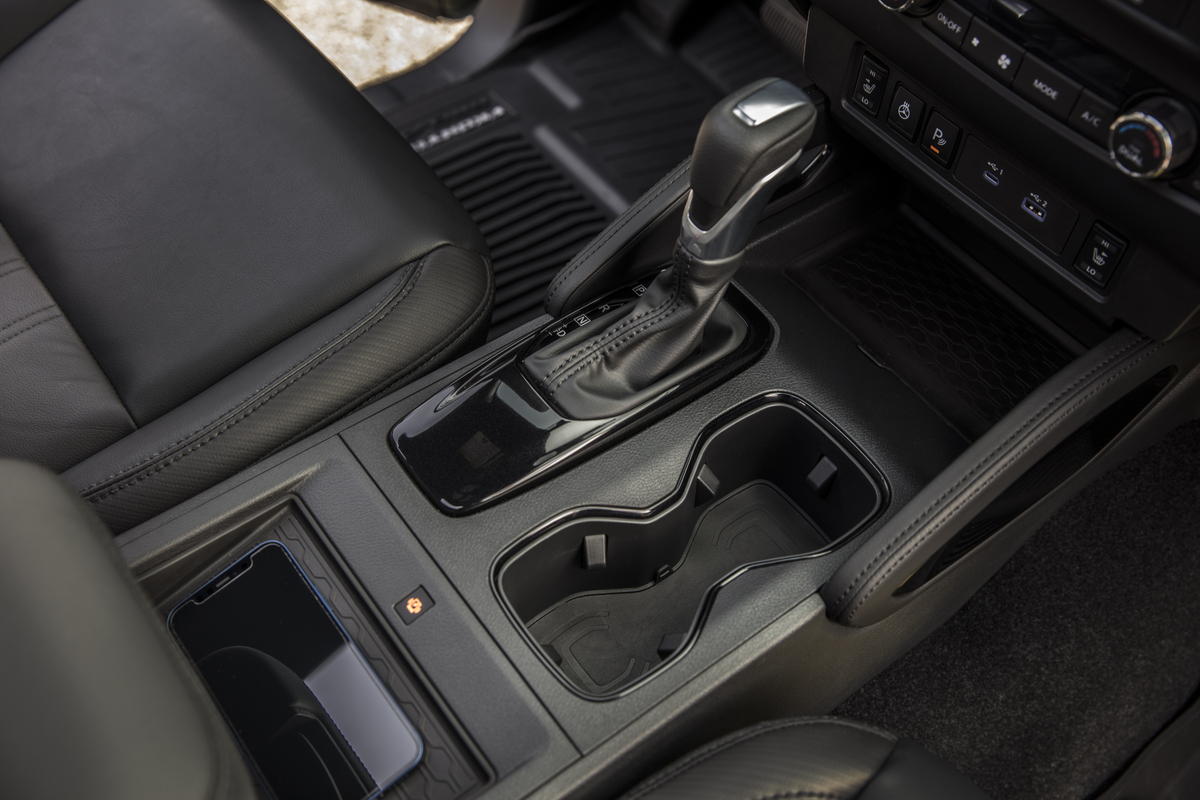 The rear locker switch is not in a functional position being too far from the driver’s reach, but the center console is a gem with multiple grab handles and an induction charger.

How does it perform off-road? 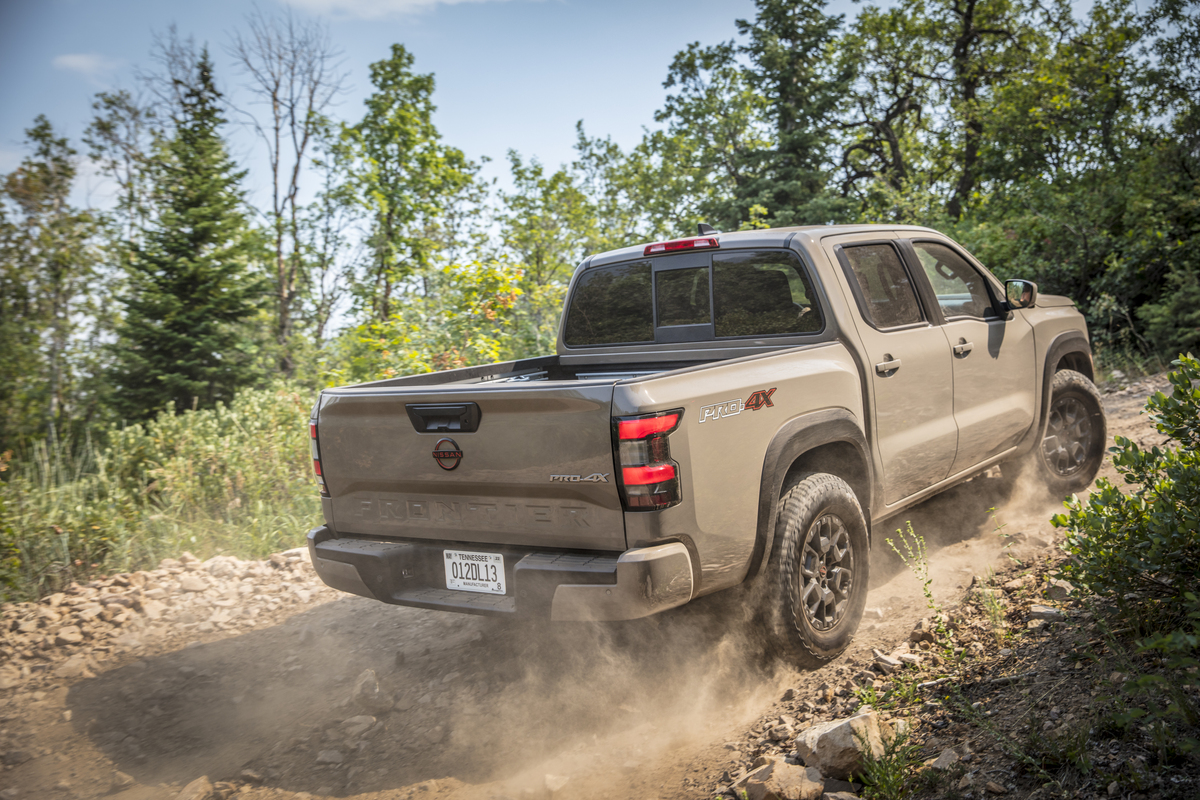 Throughout the test course, the improvements in capability was evident, showcasing a level of tuning and refinement not seen before on the Frontier. The NVH improvements from the road translated to the trail, with good damping characteristics and isolation benefiting from the hydraulic cab mounts. The Frontier has less suspension travel and articulation than the competition, but they made the best of the available travel by tuning the Bilstein shocks to perfection. Damping overall is on the firm side, particularly on rebound, but that paired well with the package. Head toss was less than expected, and larger events were well managed by the new progressive jounces (bump stops). I did notice both noise and a hard suspension stop from the front on full extension. These were early production units, but there needs to be an extension jounce fitted to the suspension, or internally on the shock to quell that noise and protect the dampers.

The rear locker engages as expected, but the switch position is all wrong. It is quite literally the furthest button from the driver, way down on the left side of the dash, just above my shin. When off-pavement, the seatbelt frequently locks (as it should), but then you cannot reach the locker button should the terrain conditions change unexpectedly. It needs to be moved to the top row on the left, which has two available switch blanks. The traction control is one of the best in the segment, with near-silent operation and smooth engagement. The only indication it was working on the loose climbs was the flashing T/C light on the dash. Previous Nissan traction control systems had far too much delay and low effectiveness, but this new application is much better and seamless. The transparent operation extends to hill start assist (works great), and hill descent control. The hill descent control is one of the most smooth and quiet operating offerings we have tested, but it is limited by any ability for driver control. Most HDCs allow for changing the set points via the cruise control switches, or by changing the transmission gear. This system has one speed, and in their defense, it works well when combined with the low crawl ratio.

Is it a good choice for overland travel?

In the most simple terms, a vehicle for overland travel benefits from reliability, durability, capacity, and reduced driver fatigue. Depending on the destination, reliability may be the most important, while others may benefit most from being a well-rested driver at the end of a long day behind the wheel. In practical terms, the new Frontier has all of these attributes, reflecting the brand’s long-standing approach toward building robust vehicles for austere environments.

The reliability and durability of Nissan products is well-documented and generally accepted, but the noise/vibration/harshness (NVH) always lagged in the outgoing model. Now, the Frontier is one of the most comfortable and quiet models in the segment, easily besting the Ranger and Gladiator. It is on par with the Tacoma and GM twins, all suffering from pronounced engine noise. I also liked the new Zero Gravity seats, which were supportive in all but the thighs (being taller, most imports lack good thigh support due to a short bottom cushion). Adaptive cruise control may seem unnecessary for international travel, but it is the first cruise control technology that is truly useful in developing countries.

Lastly, it is important to talk about capacity. Unfortunately, this is an area that Nissan continues to lag, having barely 1,100 pounds of payload in the desirable PRO4X model. This is even less than a Wrangler (yet on par with the Tacoma). As a matter of comparison, one of the first Nissan (Datsun) trucks, the D220 from 1957 had a payload capacity of up to 2,200 pounds; 1,100 pounds is simply too low for any meaningful modification to the vehicle, or the fitment of a camper. With two adults and a teenager, almost half of that capacity is gone. Add 20 gallons of water, 10 gallons of fuel, and basic tools and recovery gear, and there is only enough payload left for basic backpacking gear. Effectiveness only really begins in the 1,500-pound range, which allows for reserve capacity, or possibly a lightweight camper with a few occupants.

Overall, this new Frontier is a joy to drive, and supremely capable on most trails. Instead of feeling “inexpensive,” it now feels like an exceptional value. Nearly everything about the truck is better, and it shows. In many categories, it outperforms or out-specs the Tacoma, which makes it a genuine alternative to the TRD. What an exciting time in the midsize truck market, and for Nissan. I could not help but feel nostalgic, driving the Frontier through the mountains of Utah, the memories of the family Patrol filling my thoughts, and recognizing that Nissan still builds a supremely reliable and capable tool for the job.

Have a listen to our podcast on the new Frontier, and an overview of the state of midsized trucks.

How we would build it:

Most capable and refined Frontier to date

Payload on PRO-4X insufficient for most overland campers (less than 1,100 pounds)