This article was originally published in Overland Journal, Summer 2019

Prior to witnessing the Serengeti migration for the first time, I thought I had more of an understanding of what it entailed. I had dreamt about seeing this phenomenal sight for many years, only to realize the scale of how it all threaded together was far more impressive than I had imagined. This vast ecosystem, known to the Maasai people as “the land of endless plains,” covers approximately 30,000 square kilometers and is one of the oldest on the planet. It has a staggering diversity of plants, wildlife, and insects as well as being home to the largest terrestrial mammal migration in the world.

The ancient route of the wildebeest follows a clockwise cycle with three vital aspects: feeding, breeding, and the weather. It is an epic journey they undertake throughout the year, every year. They cover approximately 3,400 kilometers, with more than three-quarters of the route in Tanzania, then crossing into the Maasai Mara in Kenya, and returning once again to the Serengeti. A particular purpose distinguishes each segment of this journey: the massing, calving, moving-on, rutting, crossing, and finally, return. As for timing, it can vary, depending on the movement of the rains in Africa.

The number of predators here is unparalleled, a collection of over 3,000 lions, leopards, cheetahs, and numerous hyena. With plenty of food on offer, they are in excellent condition. While this yearly event plays out, the rest of the wildlife follow their own particular routes and patterns. There is seldom a case of nothing to see in this biodiversity, one of the largest on earth. For the keen birders, there are over 500 species recorded, including the striking, grey crowned crane, Tanzania’s national bird. There are also over 300 mammal species—enough for any safari addict.

Photography opportunities are endless, and it is difficult to limit images. I take two camera bodies and two lenses—a wide-angle for landscapes and a zoom lens for wildlife; both stay on for the duration of the trip. Changing lenses on the fly without getting fine dust inside is near impossible.

In addition to wildlife, the proud, statuesque Maasai people also live in this region. Their traditional shuka cloth, known warmly as the African blanket, has been copied on the fashion runways of Europe. It is polite and respectful to ask before taking a photo and paying the small amount required. A visit to a Maasai village is invaluable, allowing one to engage in another way of life.

Standing in the middle of the endless plains, a cup of Kilimanjaro coffee in hand, I’ve often wondered how many millions of creatures have stood on the same spot—an extraordinary sensation. There is so much to learn and discover here, and scientists are still mystified on many aspects of the Serengeti. We are only skimming the surface. 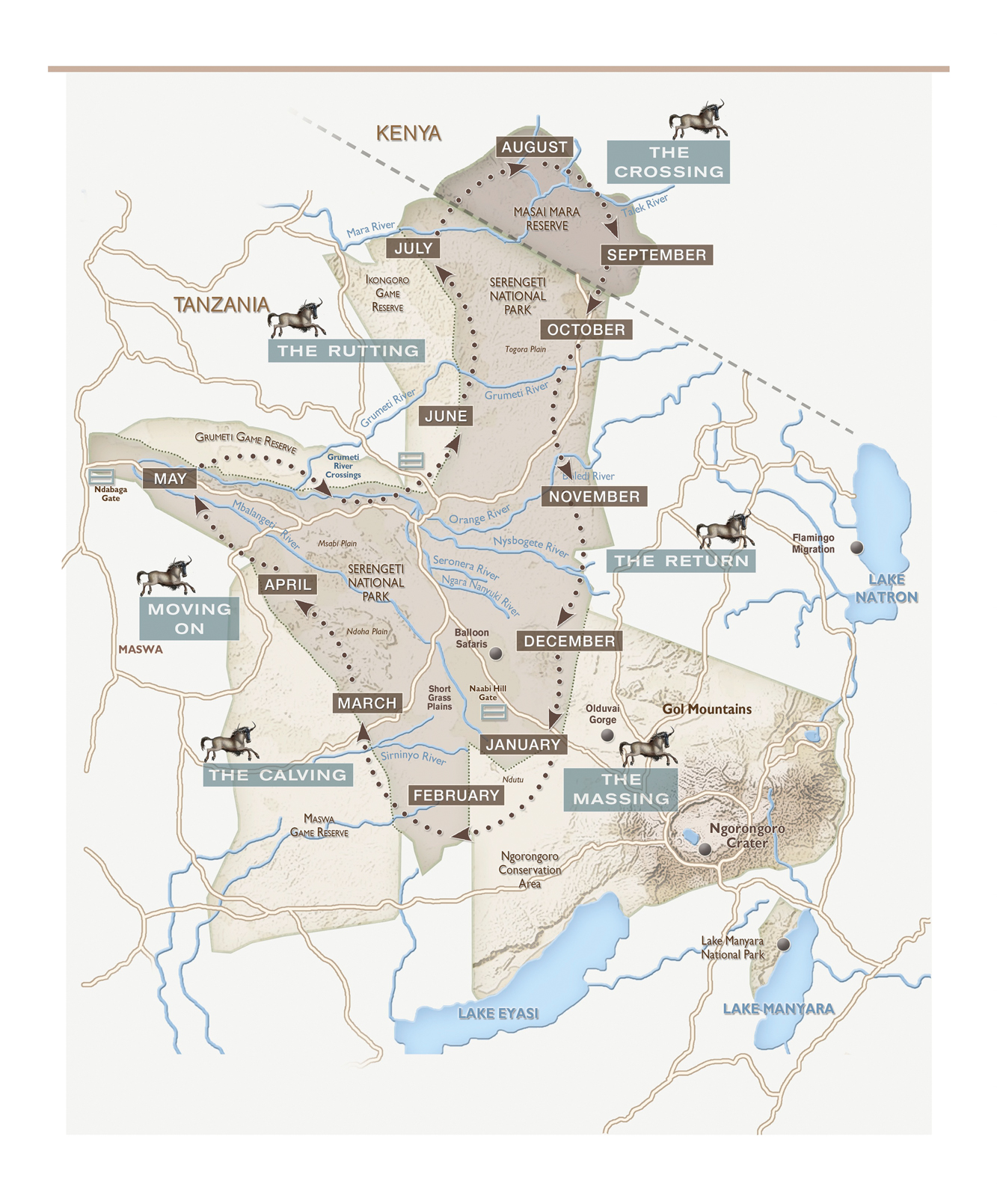 Though actual timing is dependent upon the rains, up to two million wildebeest follow this annual migration pattern each year. 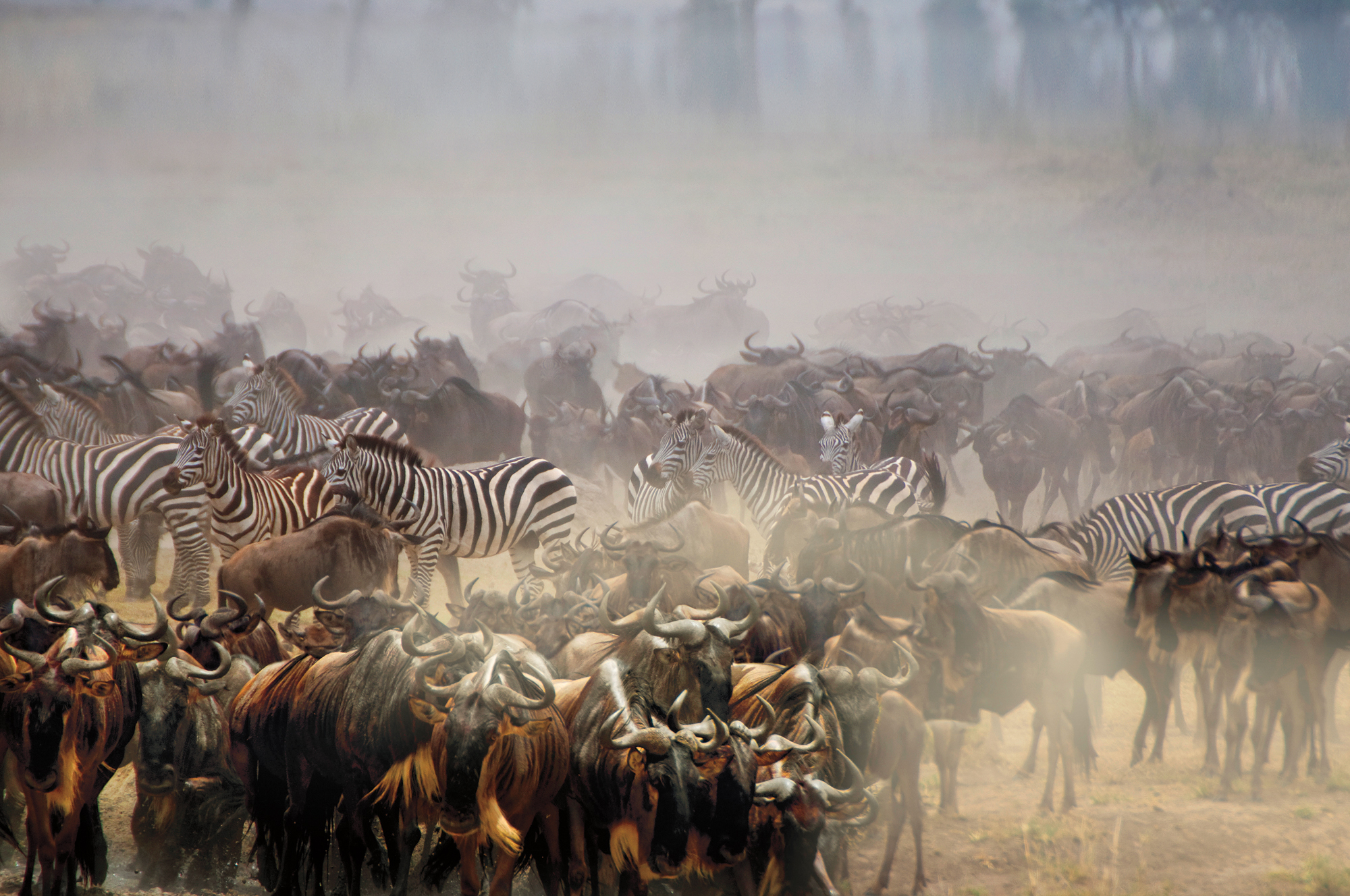 Heaving on the brink of the riverbank, the sounds, smells, and taste of the dust are all about to explode in a visual spectacular. deciding where to point your lens is a challenge for this extraordinary experience. 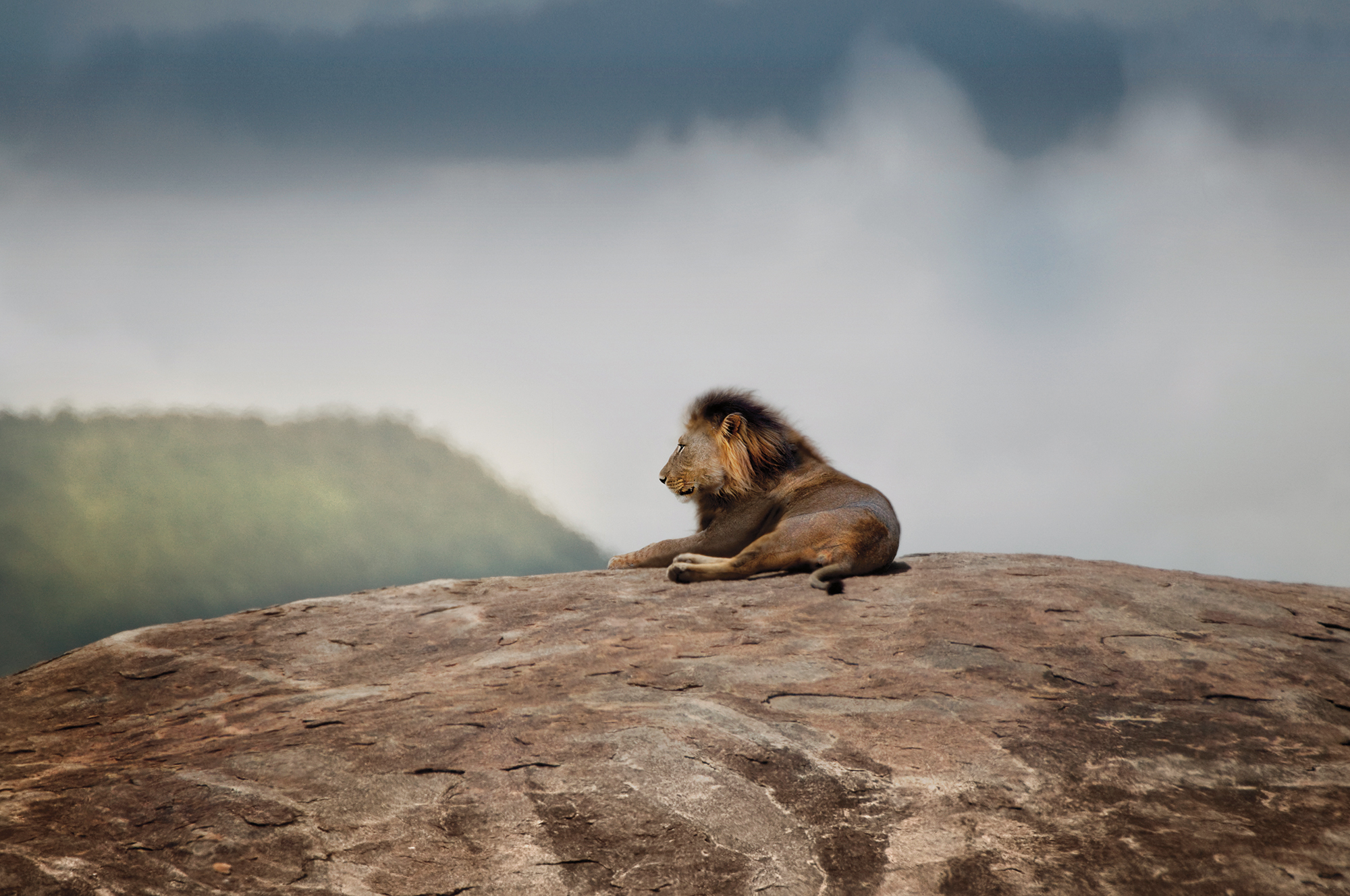 Lions often use the granite outcrops in the Serengeti called kopjes, formed through volcanic activity over a million years ago—a fitting throne for a king. simba kopje was the inspiration for the lion king movie. 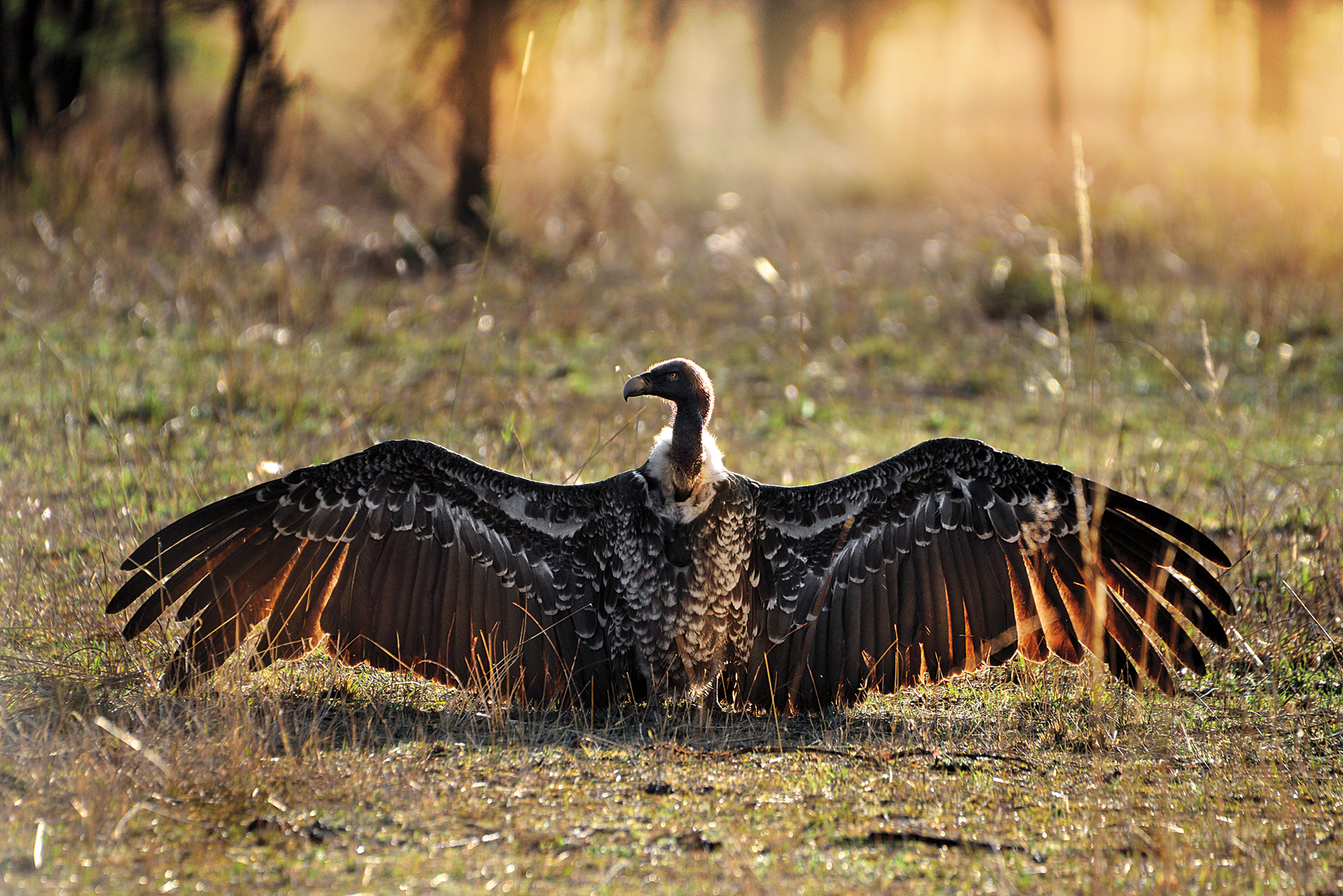 The highest-flying bird in the world, rüppell’s griffon vulture, drying its wings after dipping into the mara river. vultures are one of the unsung heroes of the wild amongst other scavengers who perform the task of cleaning carcasses. unfortunately, their numbers are dwindling with each year, a concern for conservationists. 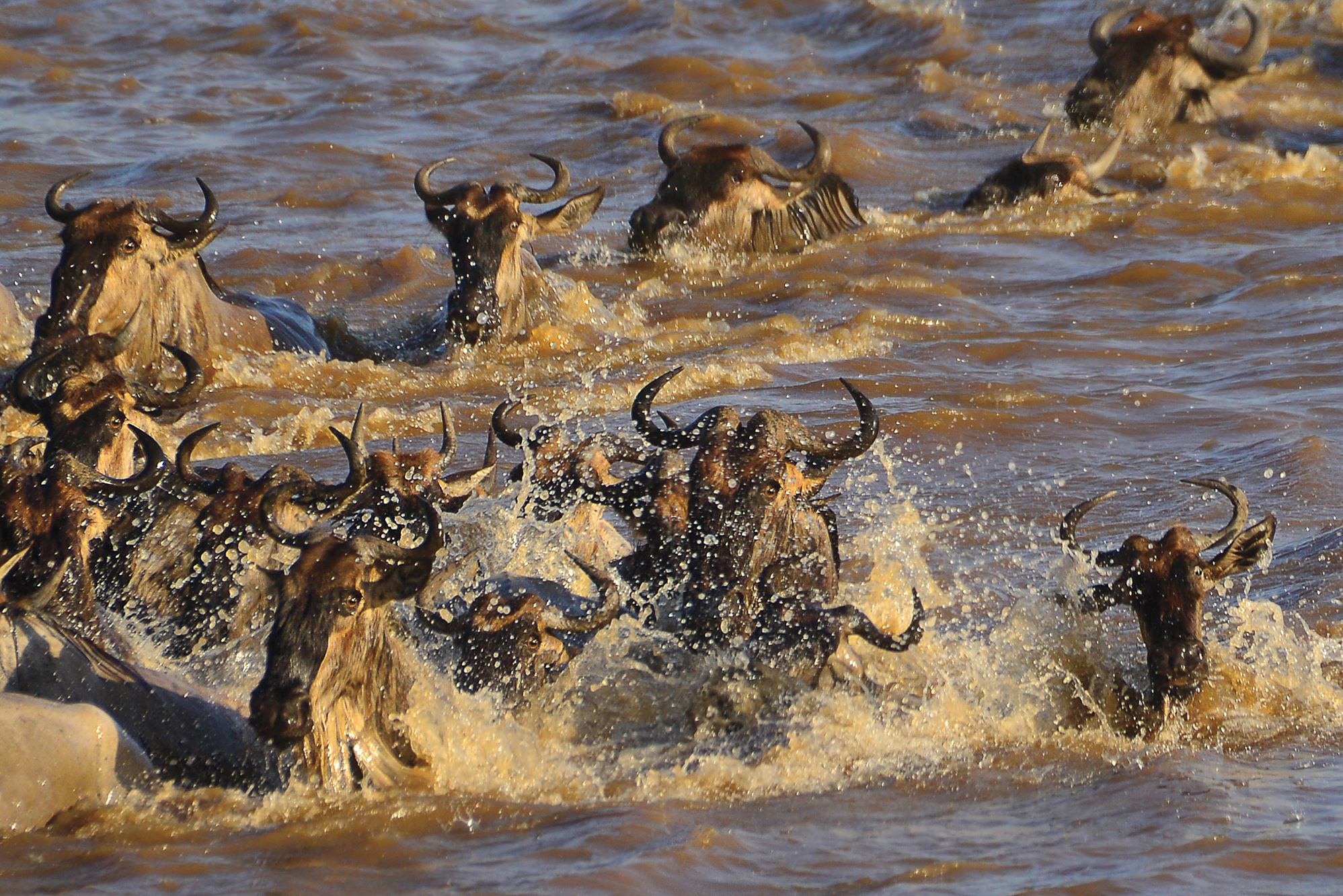 One brave leap into the unknown: the crossing of the Mara river is a severe and life-threatening undertaking. through the churning and splashing of the water, the animals’ eyes dilated with fear, and time stood still. 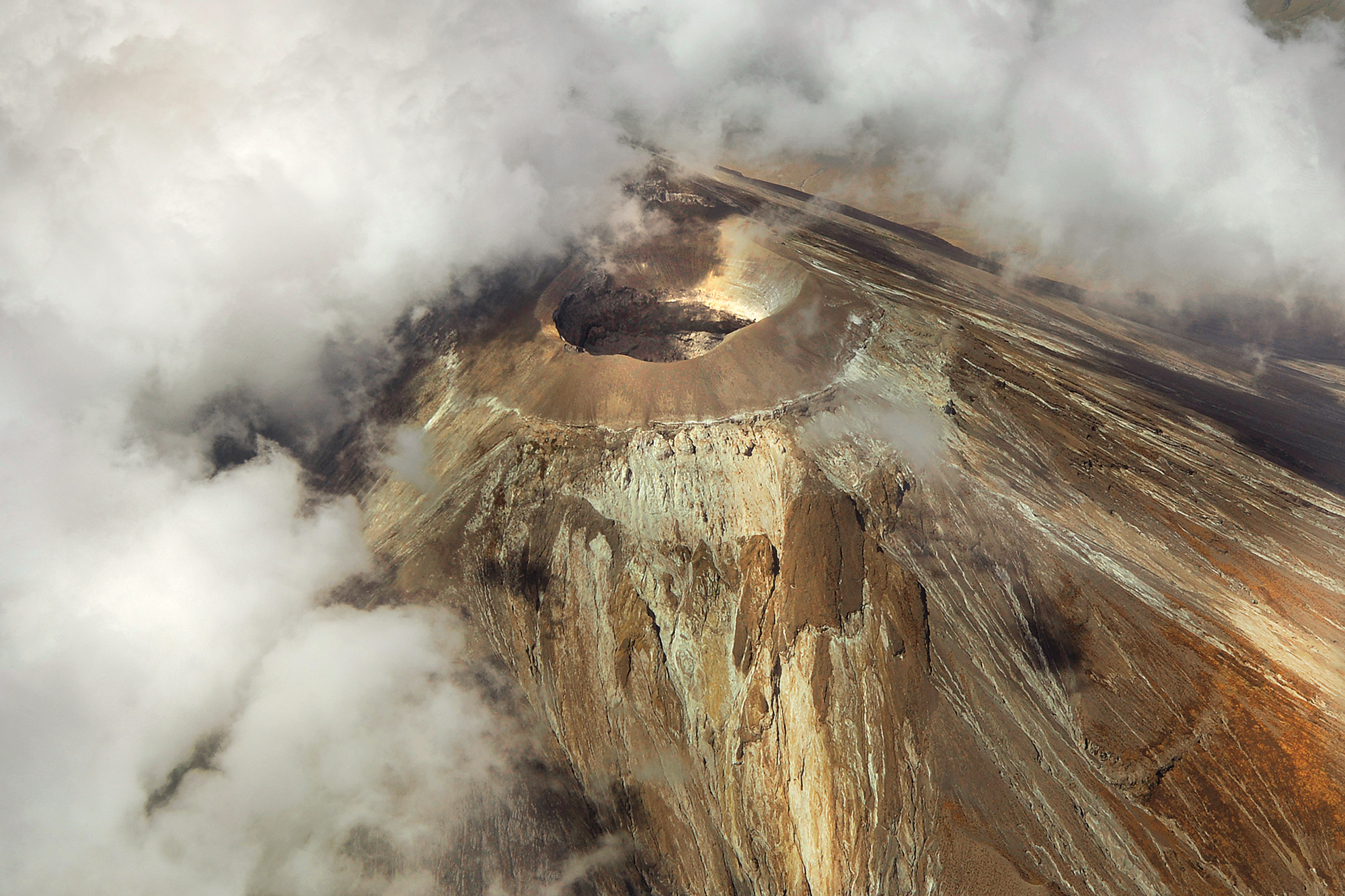 Ol Doinyo Lengai is an active volcano meaning mountain of God to the Maasai. in the 1960s, scientists discovered with delight that it erupts the coldest lava in the world. 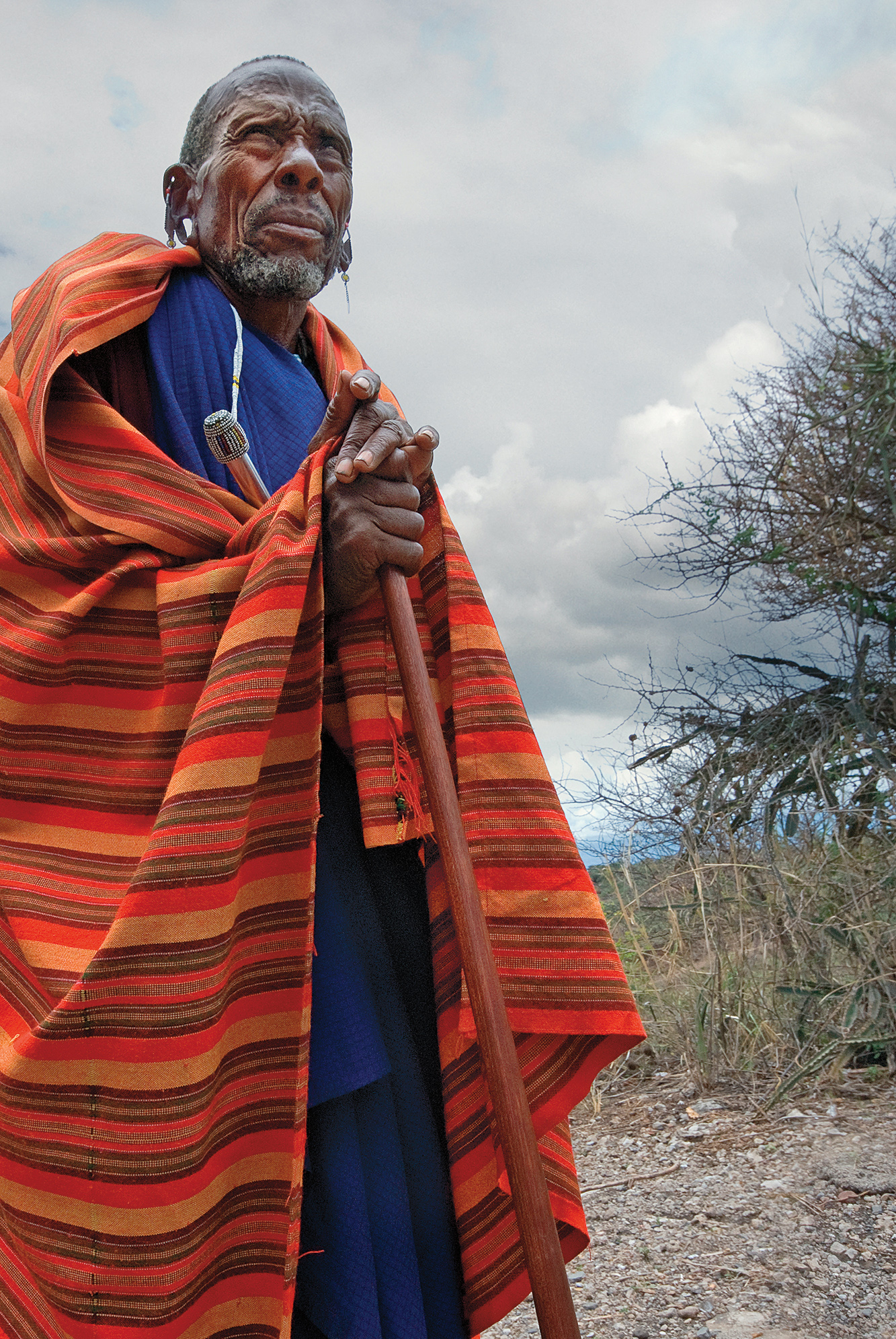 This gracious man allowed me to take his portrait at Olduvai gorge, his faced etched with a thousand untold stories. 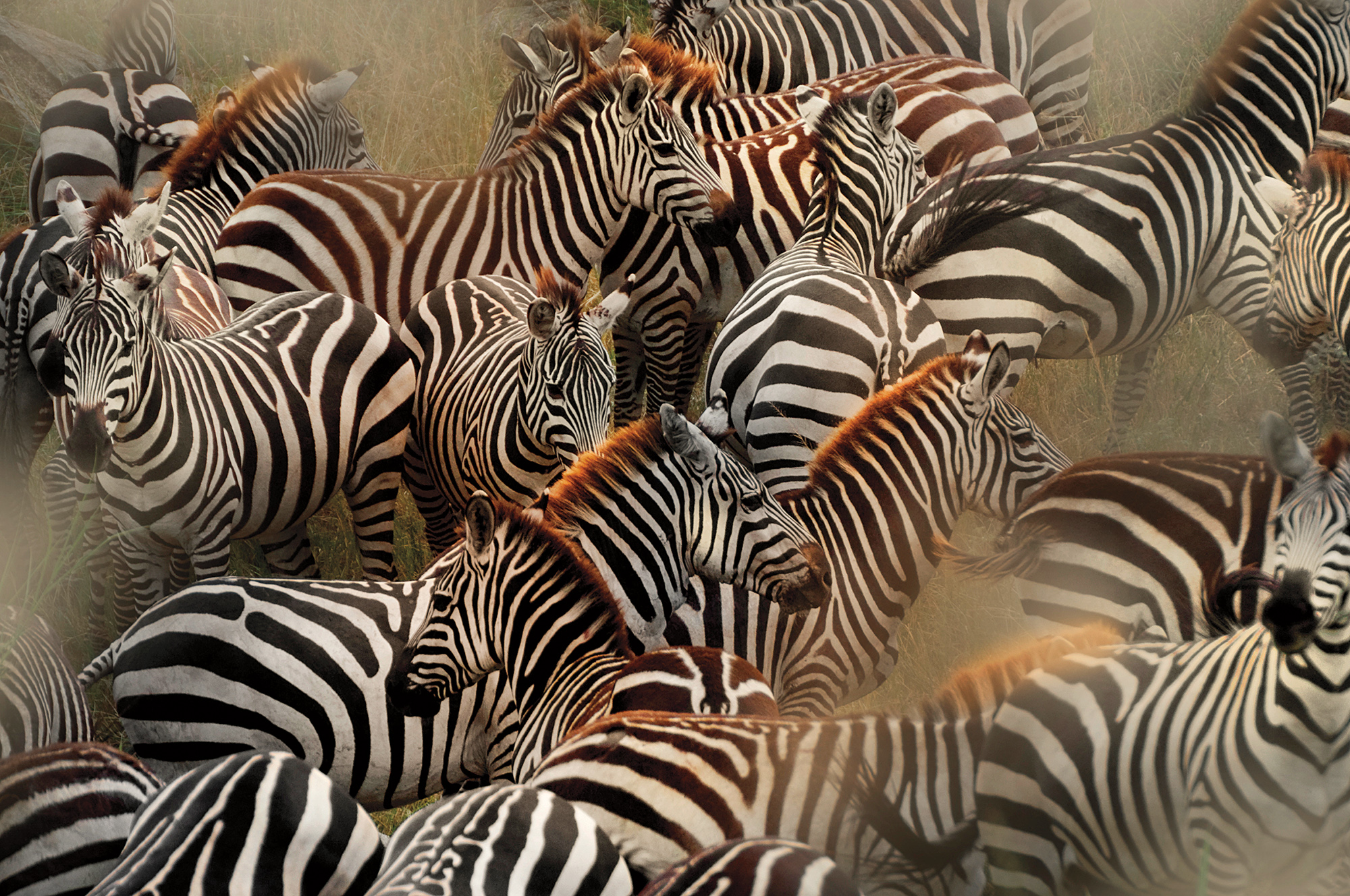 Zebras are the “designed graphics” of the plains and beautiful creatures to photograph. although their numbers are much lower than the other participating species, an astonishing 200,000 take part in the migration. 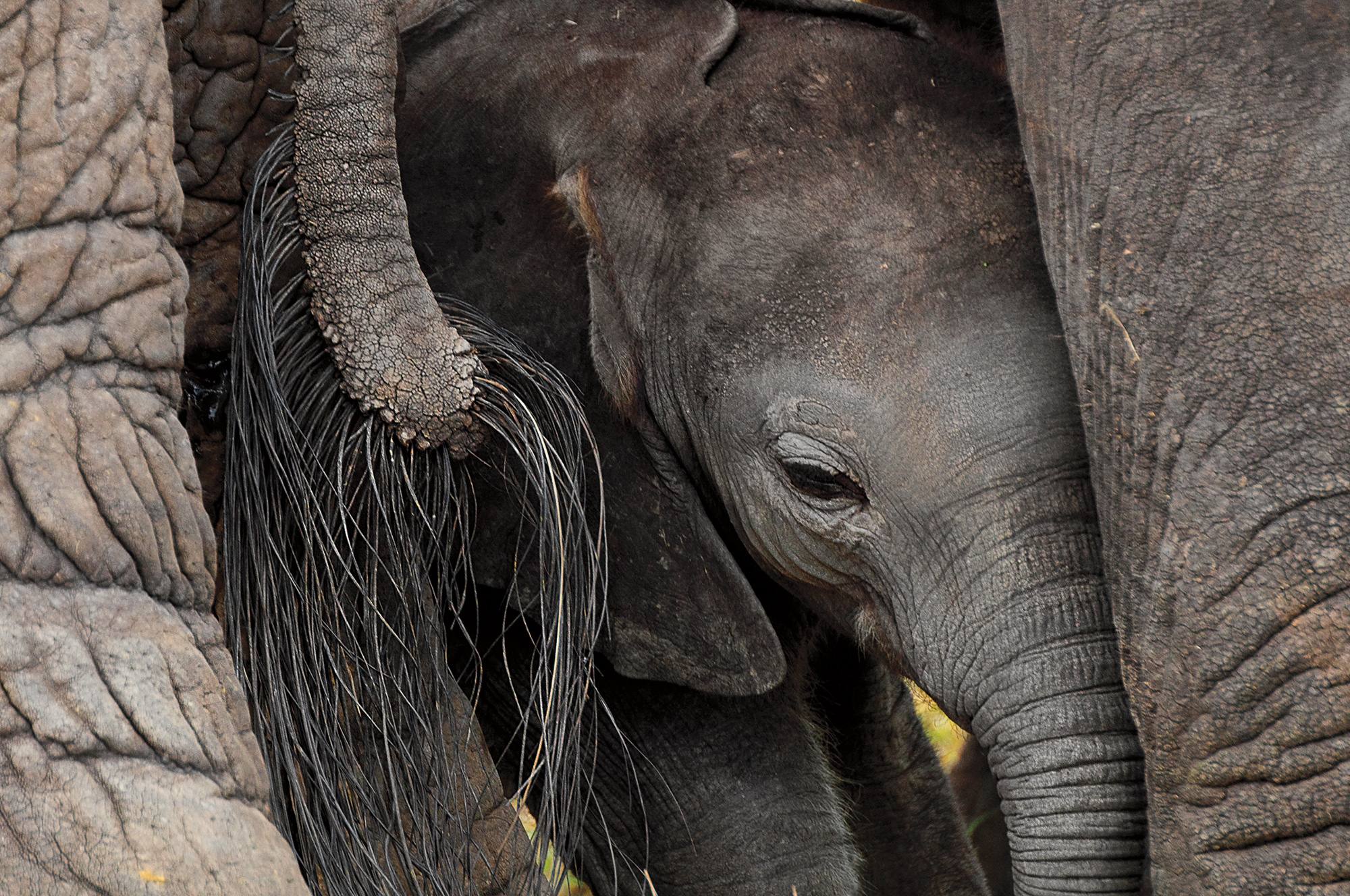 Elephants are always a joy to watch, no matter where you are in Africa. the gestation period is a long 22 months; after birth, the calf is guarded fiercely by the entire herd. 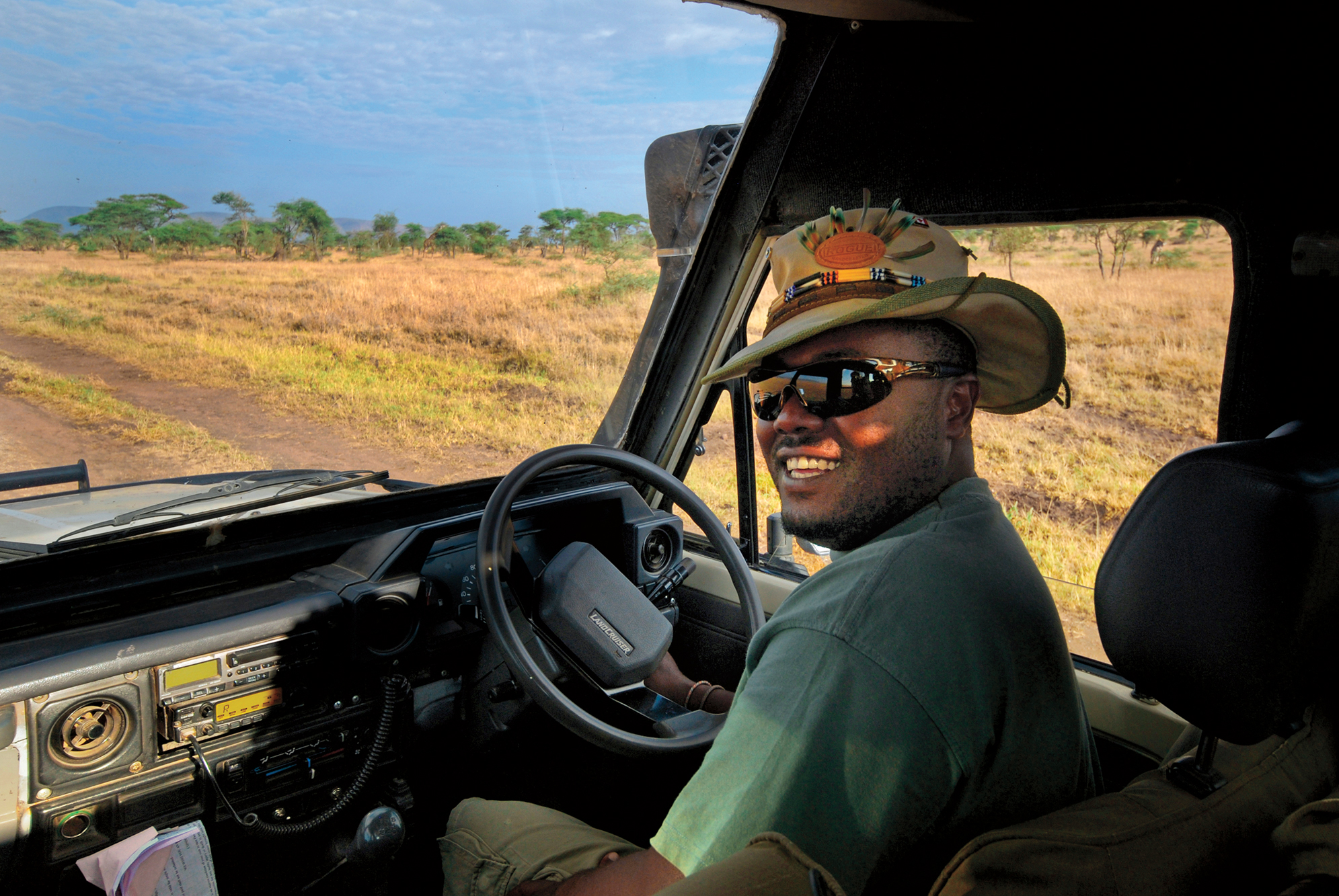 My guide handled my questions and enthusiasm with good humor; the Maasai tribes live close to nature and are knowledgeable on the animals as well as the plants— but where he excelled was his driving skills in black mud areas. 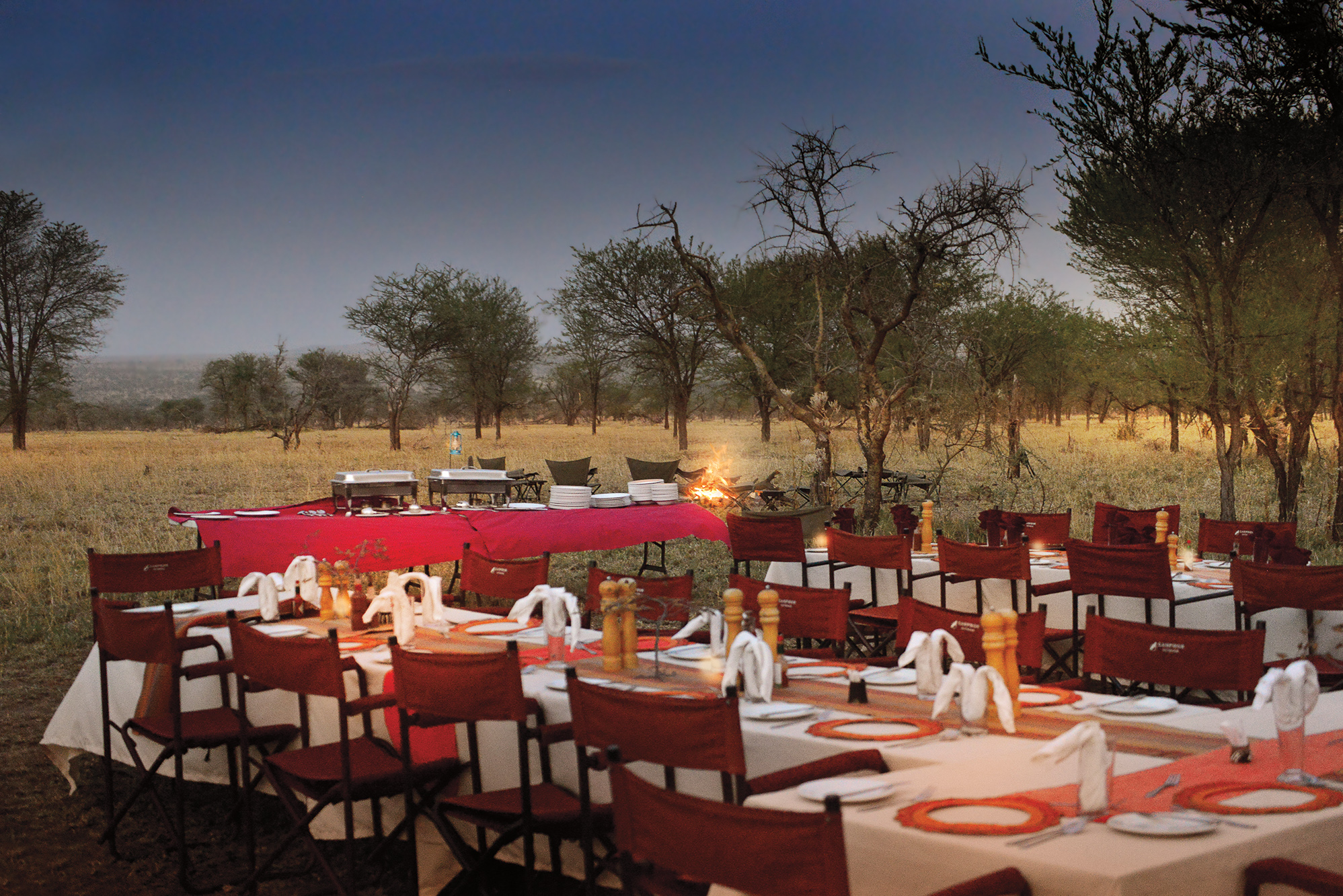 Seasonal mobile camps follow the area of the migration; you are in the heart of the activity with thrilling night sounds and hearty food. 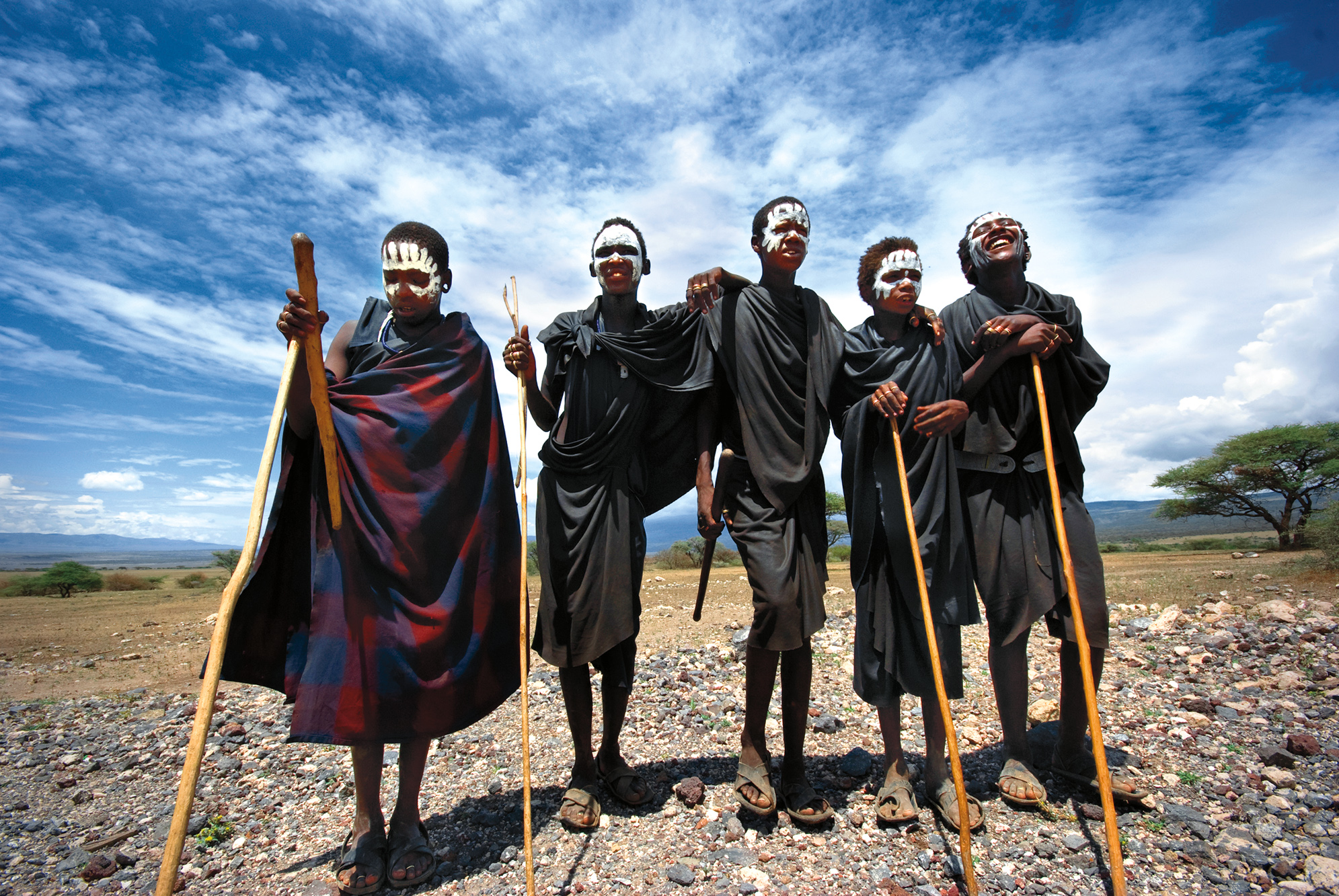 Maasai initiates, on the road to becoming strong warriors in their communities. there are many different rituals to understand, mainly involving circumcision, interpreted from the dark colors, face painting, and weaponry. I loved the interaction I had with them, without any spoken words. 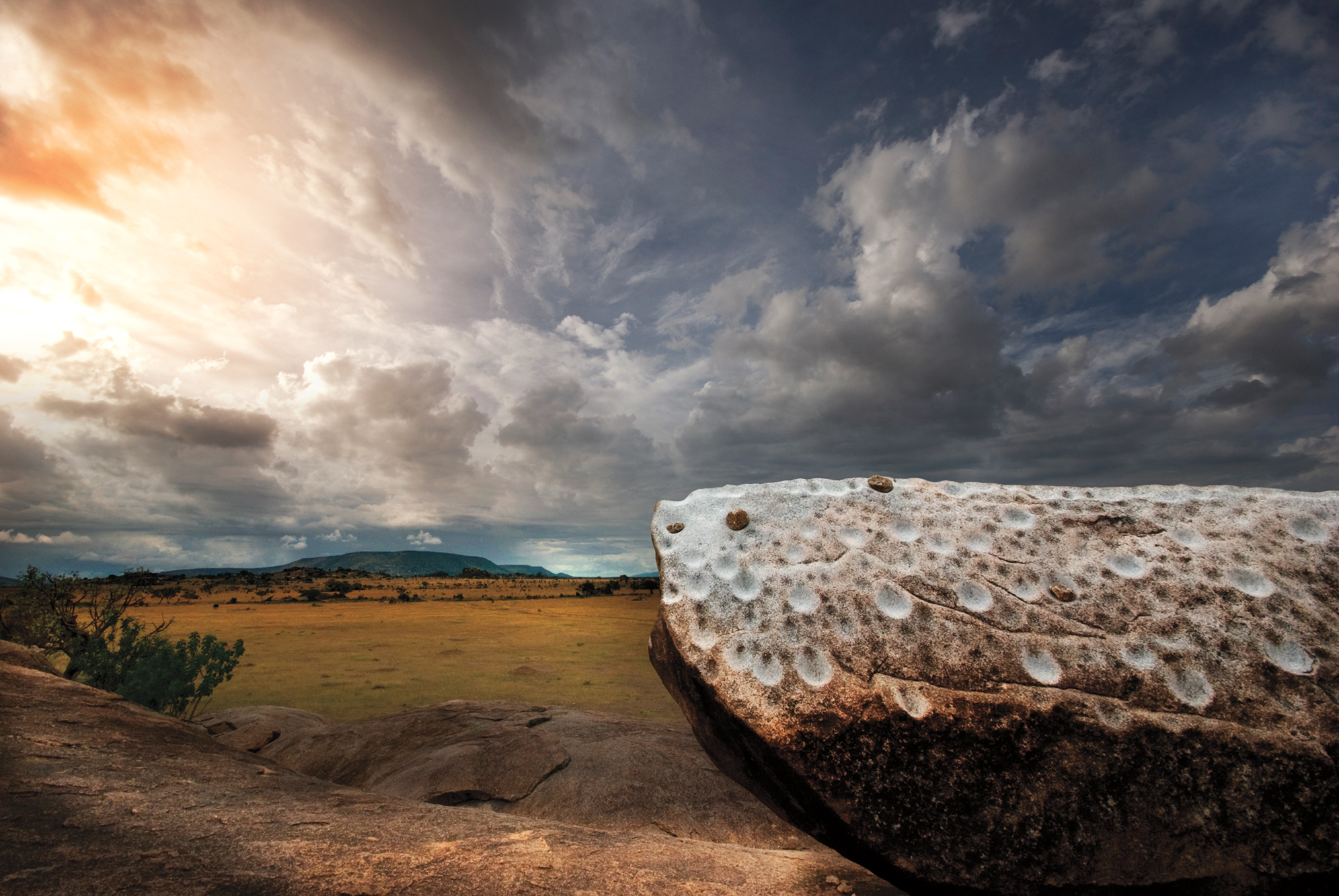 In a forgotten era, the rock gong was struck by smaller rocks, summoning the Maasai elders across the endless plains to gather for a meeting at moru kopjes. 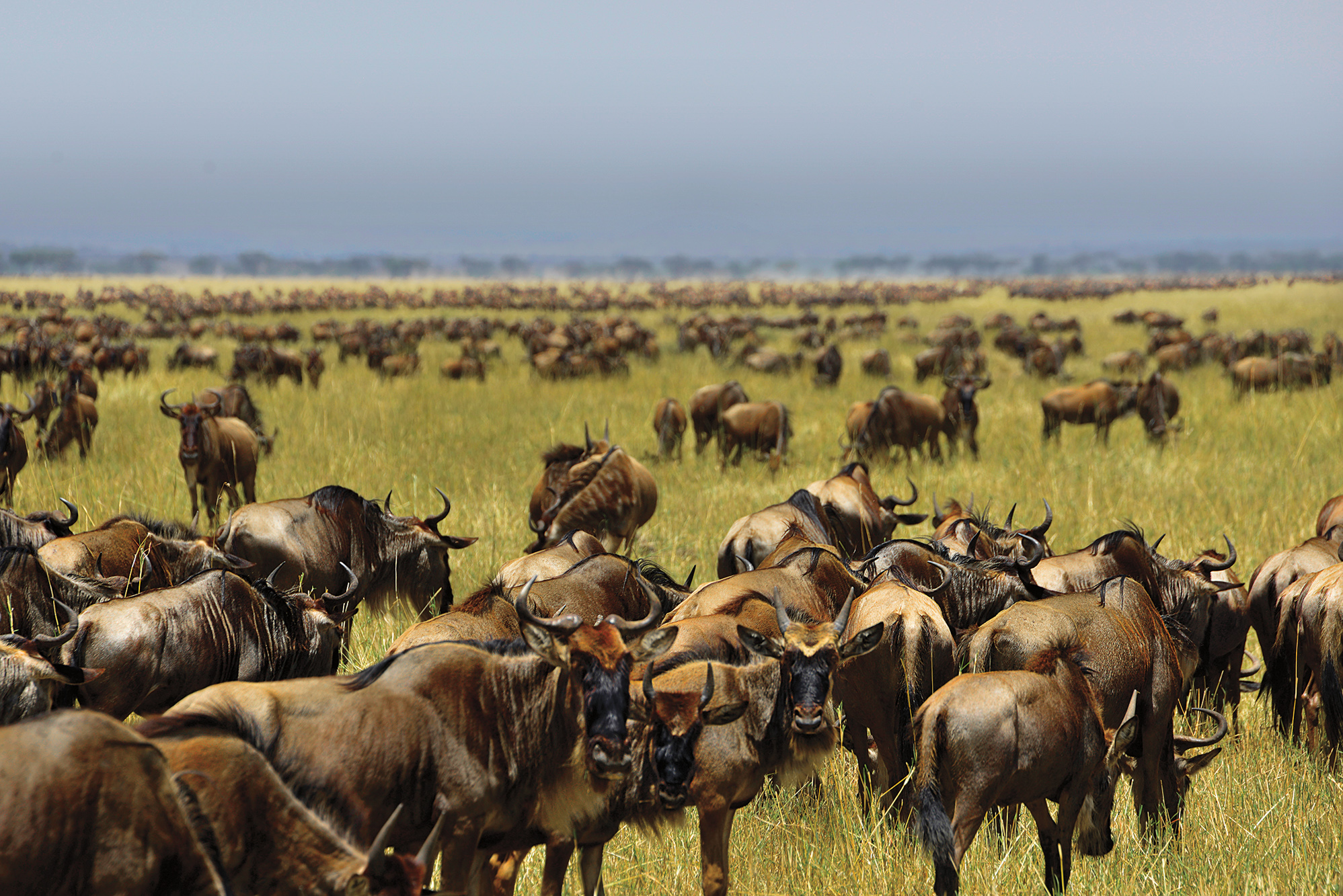 With the return to the grasslands in the southern plains, the urgency of the migration has transformed into a canvas of tranquility and abundance— until it starts all over again. 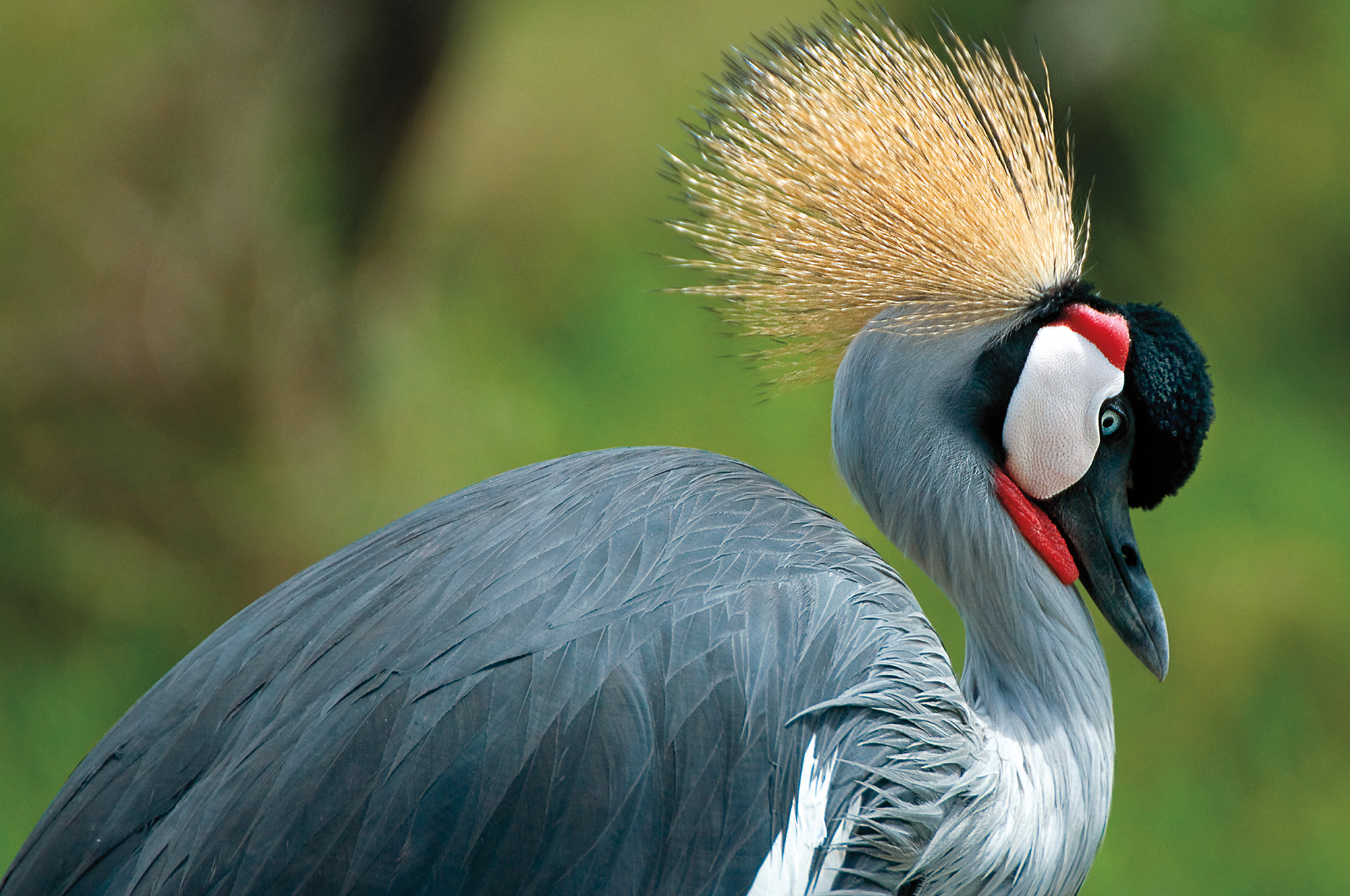 A coy looking grey crowned crane, yet their mating dance is exuberant with posturing and outstretched wings. 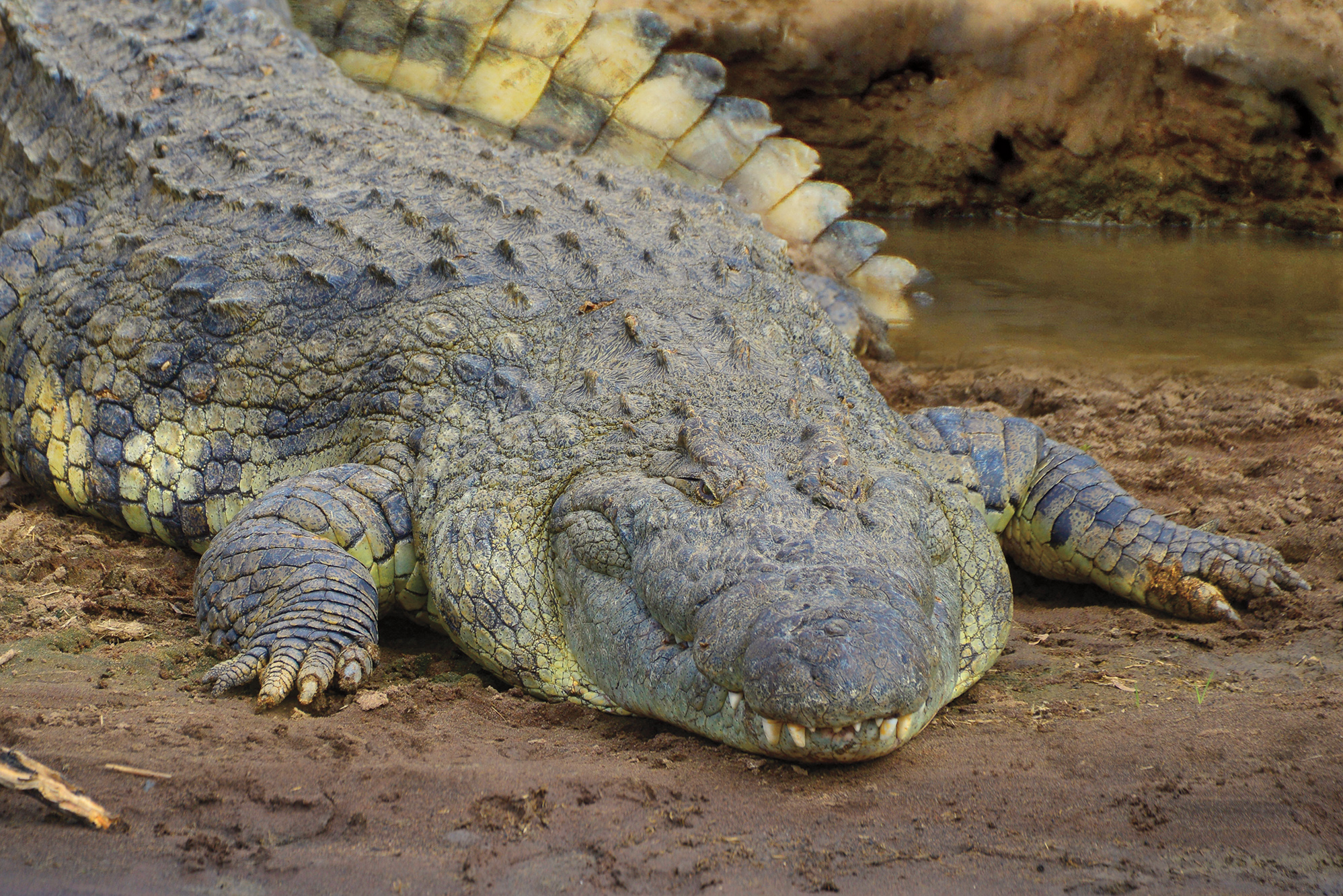 Reaching 18 feet long, the grumeti giants are some of the largest Nile crocodiles. these chaps can adapt their feeding to once a year during the migration feast. 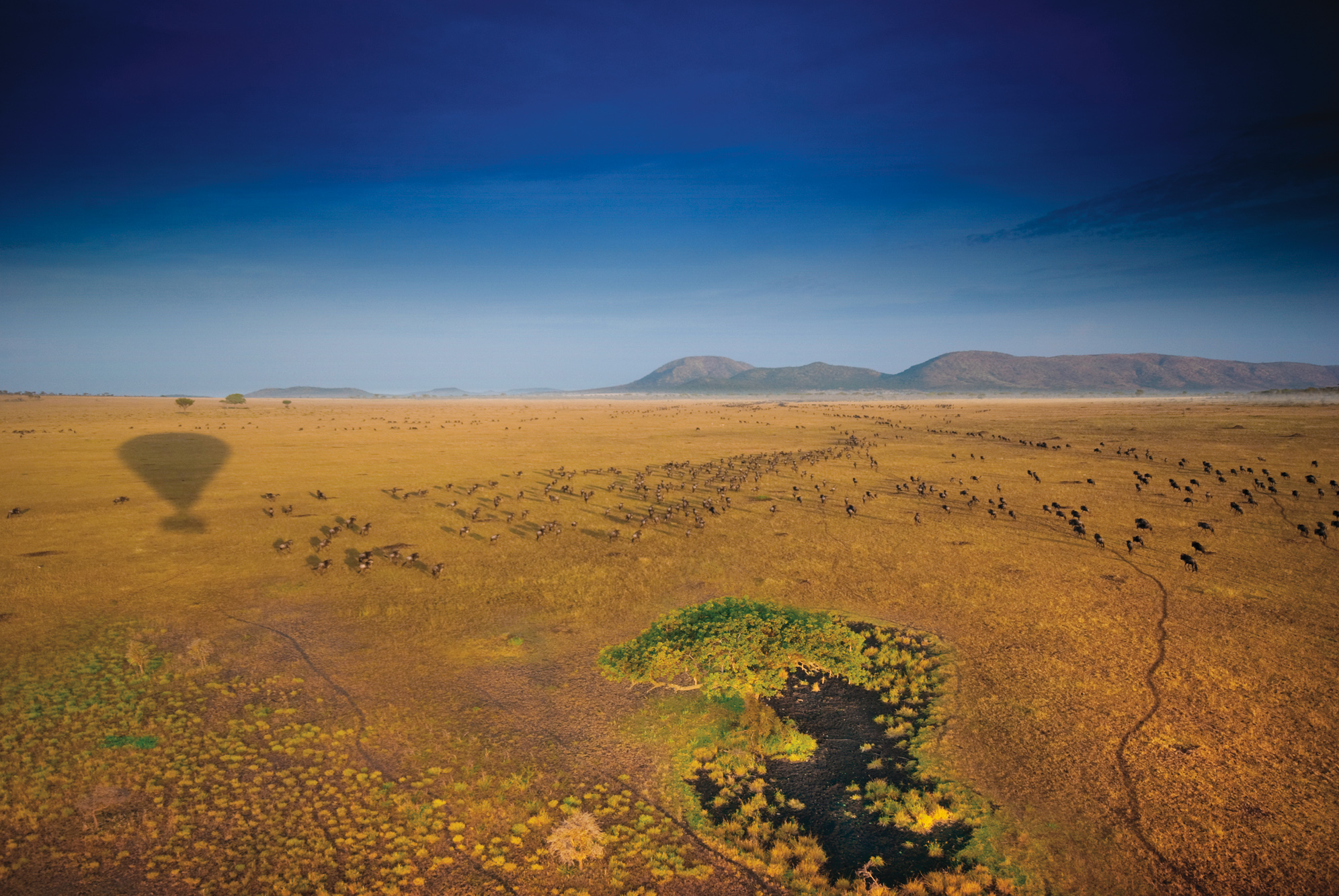 Floating effortlessly above the magnificent vista in the early morning gives an inkling of the magnitude and beauty of the Serengeti. wildebeest herds scattered below, painting long shadows in the light, confirming why this natural wonder needs preservation. 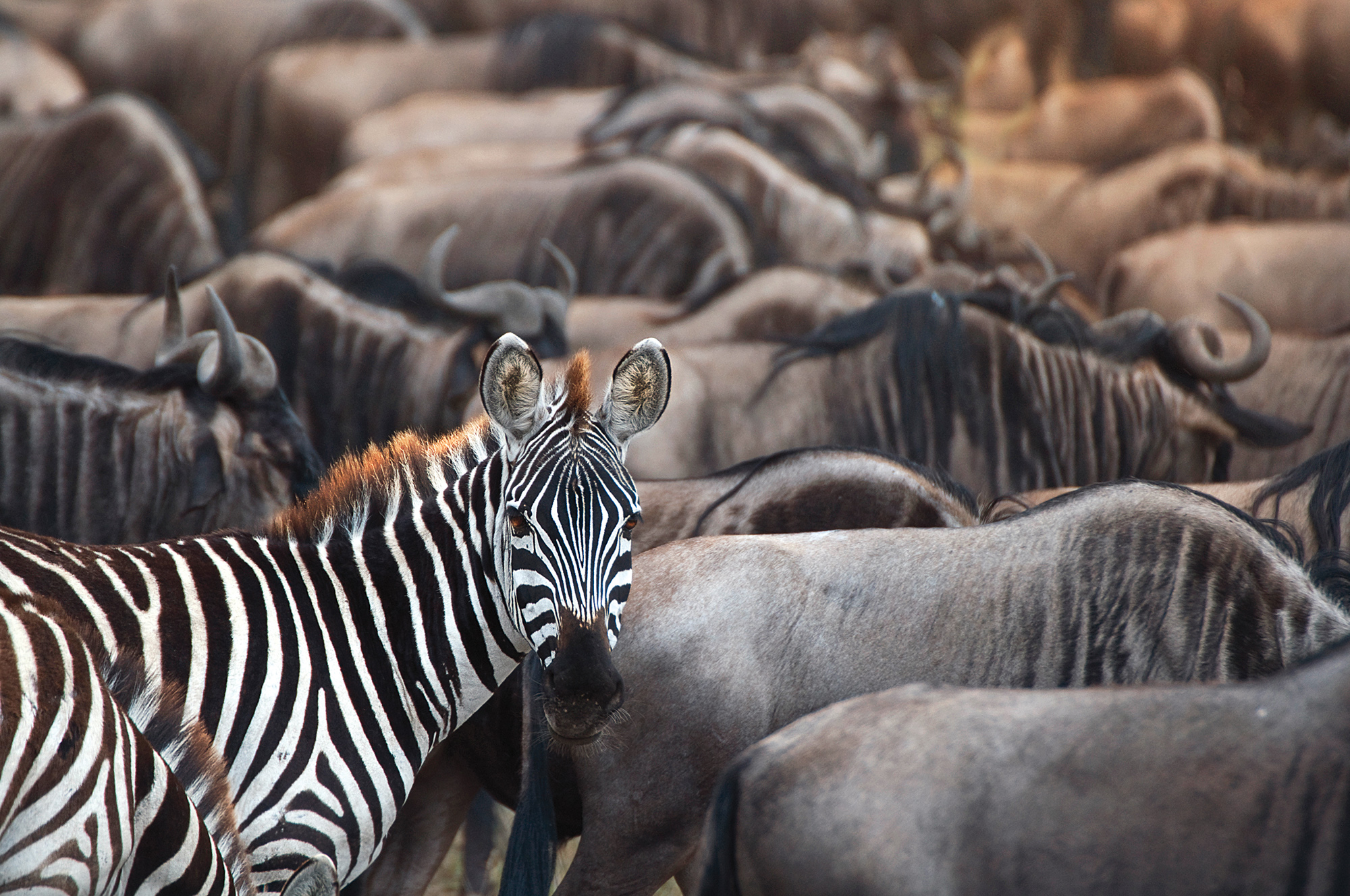 These two species can travel together as there is no competition for food; they eat the same grass but different parts. The zebra eat the taller grass while the wildebeest prefer the shorter—a symbiotic relationship. 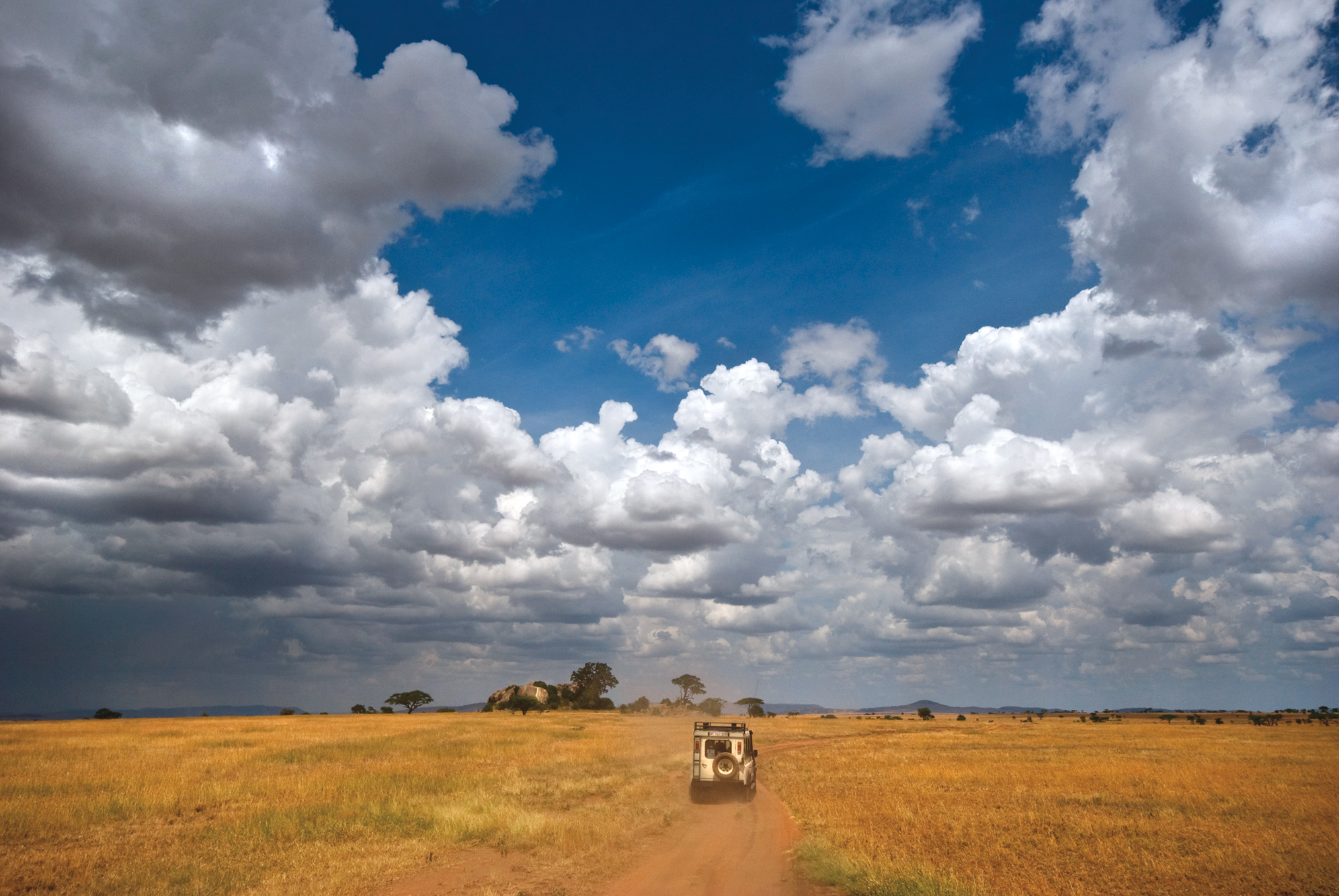 From the central seronera airstrip, the first drive to the camp gives a taste of the landscape which is mostly flat with rocky outcrops: they look like islands in a sea of pale grass. 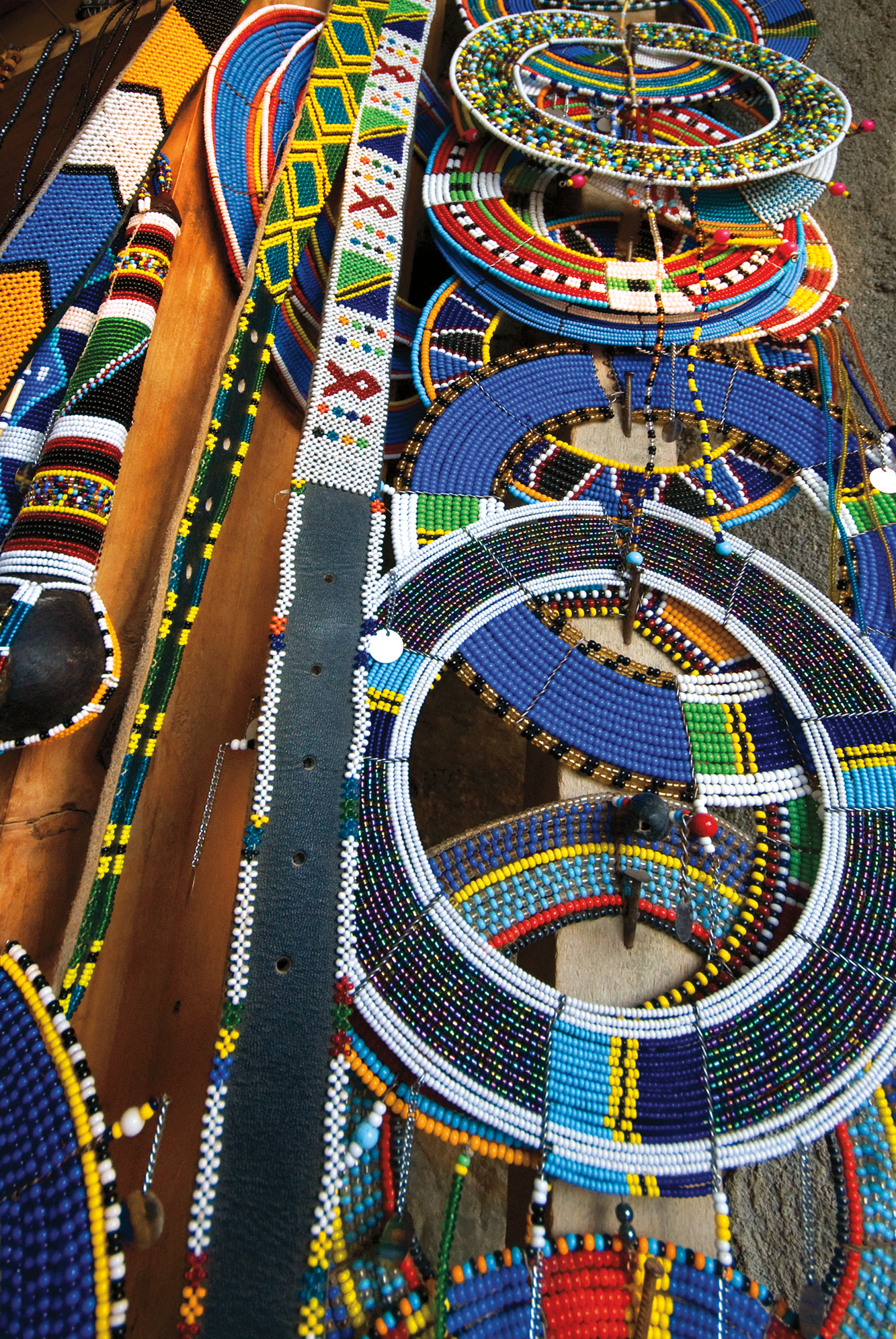 Both men and women wear jewelry in the Maasai tribes; the beadwork tradition is passed down by the women to each new generation. the colors and designs have symbolic meanings indicating social status, age, marital status, and even whether a woman has given birth to a boy or girl. a visit to an authentic village is worth it, rather than a tourist curio shop. 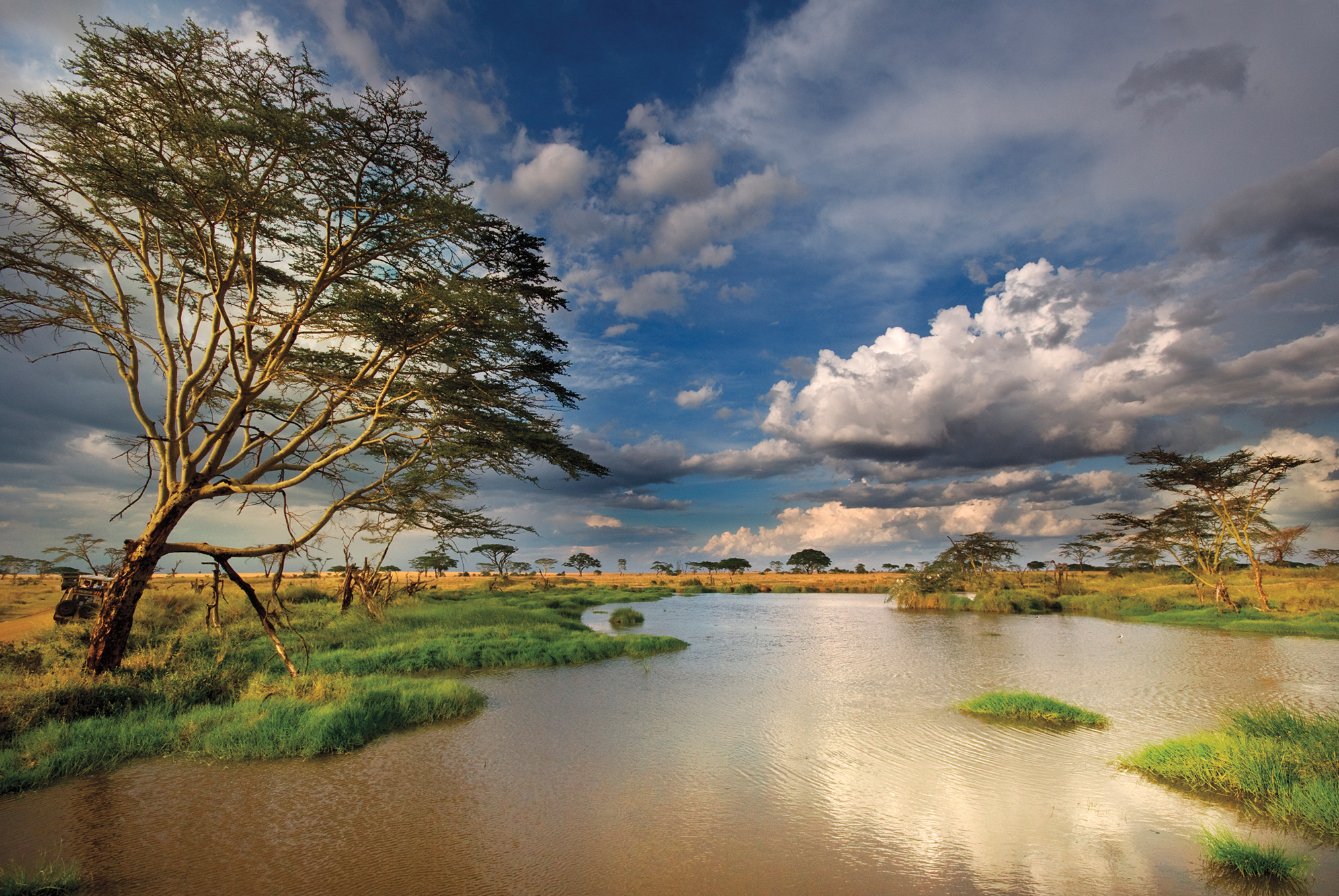 Landscape photography is difficult in a flat savanna unless you have clouds for depth and a delightful oasis like this to give perspective.

Born in South Africa, Shirli’s career and passion revolve around the African continent and its wildlife and cultures. She cut her teeth on advertising after art school and eventually moved into photography. She periodically packs her 2004 Defender, known affectionately as Tintin, and heads out to some remote locale to capture a library of images for her fine art portfolio. Recognized for her wildlife and landscape photography, Shirli is a driven conservationist and steward of Africa. She co-authored the book Africa’s Ultimate Safaris, an extraordinary photo journey through the continent, showcasing some of its most beautiful and wild destinations. She is currently working on a series of books that will take her into Africa once again, as well as Europe and the United States.