It started many weeks ago with a tireless campaign to acquire the most pristine second-hand BMW F650GS Dakar we could find. These bikes were released in generous numbers so finding them for sale is not much of a challenge. What is a challenge is locating specimens which are not grossly overpriced or beat to a bloody pulp. It was quite a relief then to find an excellent offering, a 2003 Dakar with exactly 4800 miles on the ticker. Loyally maintained by two previous owners, this was exactly what we were looking for.

As fast as I could make the arrangements, funds were transferred and a plane ticket purchased to retrieve this motorbike from its owner in Arvada, Colorado. Some might say it was a fool’s errand to buy a bike site unseen and then ride it 1000 miles home to Arizona, but the reputation of the Dakar gave me ample confidence the trip would be nothing but smooth sailing. This was not to be the case, but that had little to do with the motorcycle.

The first ever F650GS arrived in 1993 to mixed reviews, if not outright derision. Bimmer loyalists, clinging to the halcyon days of the airhead boxer, cringed to see this new BMW with its single cylinder engine. A powerplant not even made by the namesake brand. It was obvious this new inclusion into the BMW line was going to have to earn its spot amongst the other GS bikes which came before it. As the years passed however, the “Funduro” with its Austrian-made Rotax engine would prove worthy of the BMW badge, and slowly attracted legions of ardent fans. In 2000, the Dakar edition of the F650GS was introduced to further improve the offroad attributes of the original platform. With the addition of a larger front wheel, longer travel rear suspension, and a couple of other minor improvements, the Dakar became one of the more popular offerings in the BMW lineup. It is a well traveled iteration of the GS, and some would argue as well traveled as the R series GS bikes.

The best average bike in the world.

It’s commonly accepted that BMW engineers are amongst the best in the world. When it came time for them to design the Dakar, I suspect they set out to make the world’s most exceptional motorcycle within the most average range of design criteria. The end result––the worlds best average motorcycle. I realize that’s an odd concept. It would be like someone saying you have the most beautiful big nose. The Dakar is average, but in the best ways possible.

By the digits, the Dakar is positively unassuming. The 652cc water cooled engine produces just 50 hp and the curb weight is not exceptionally light at roughly 400 pounds. It’s not excessively quick. It reluctantly ventures north of 85 mph, and all things considered, it’s really quite middling in every other way possible. That however, doesn’t stop it from being exceptional. It took me a while to come to that conclusion, but I think it’s spot on.

As I arrived in Arvada, Colorado to meet this motorcycle in person, the clouds overhead gave clear warning the first miles would be arduous and void of reward. Rain fell in staggering amounts as streets flooded and parking lots turned to oil-slicked lakes. It was September, 11th. Not just a mournful date, it was the day the Front Range of Colorado suffered a 500 year flood event. Within minutes of throwing a leg over the Dakar for the first time, I was crossing flooded intersections with water up to my shins. After re-evaluating my route home over the next two days, I was finally able to hit the road and tackle my 1,000 mile ride to Overland International HQ in Prescott.

Anytime I mount a new steed, there always seems to be a prolonged introductory period. Like an awkwardly long handshake, these first miles are seldom fun, oft filled with weird rituals of fidgeting and fiddling with the features and controls. This was simply not the case with the Dakar. One of the most rider-friendly bikes I’ve piloted in a long time, the Dakar was like an old pal from the first mile.

What I noticed first was just how at-home the Dakar was on the highway. Smooth and stable, it rolled up to 75 mph with unfazed alacrity and maintained that speed without having to be whipped like a lethargic mule. Not buzzy or prone to wander, it behaved like a bike purposefully cordoned to tarmac. Steering onto the bumps and ruts of Weston Pass, I thought those manners would change. Instead, the Dakar met the dirt with enthusiasm, stretching its suspension components as if out of relief. 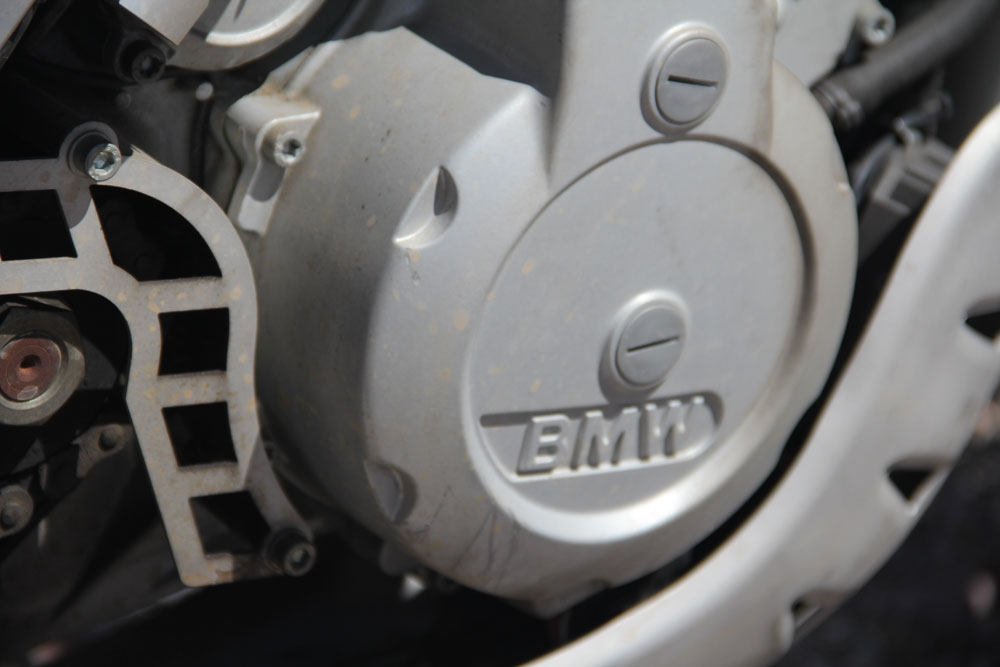 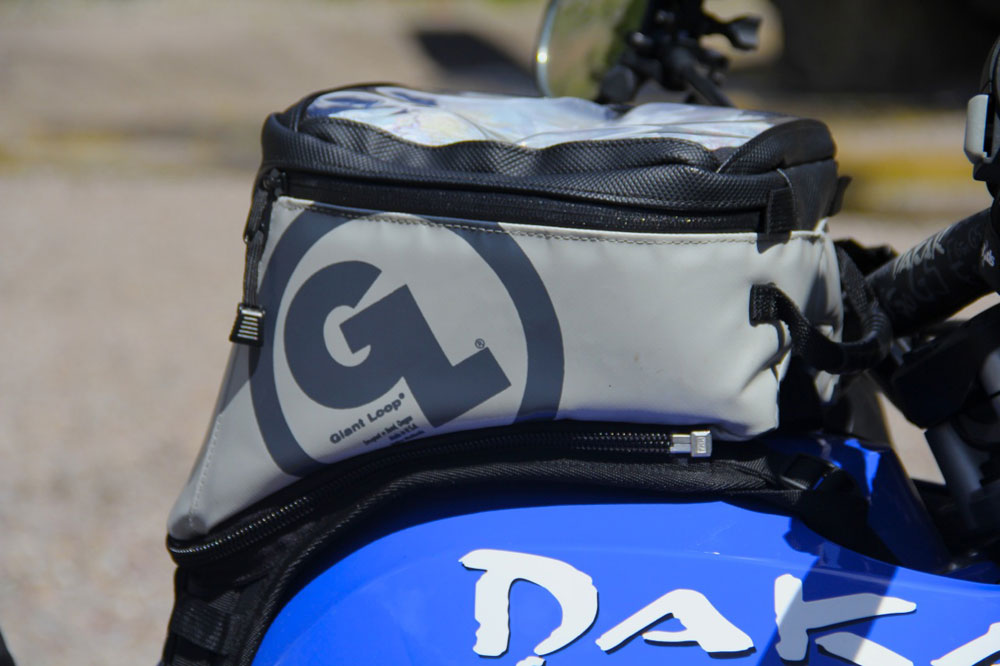 The Giant Loop Fandango Tank bag proved to be a perfect fit, and a welcome addition to the motorcycle. 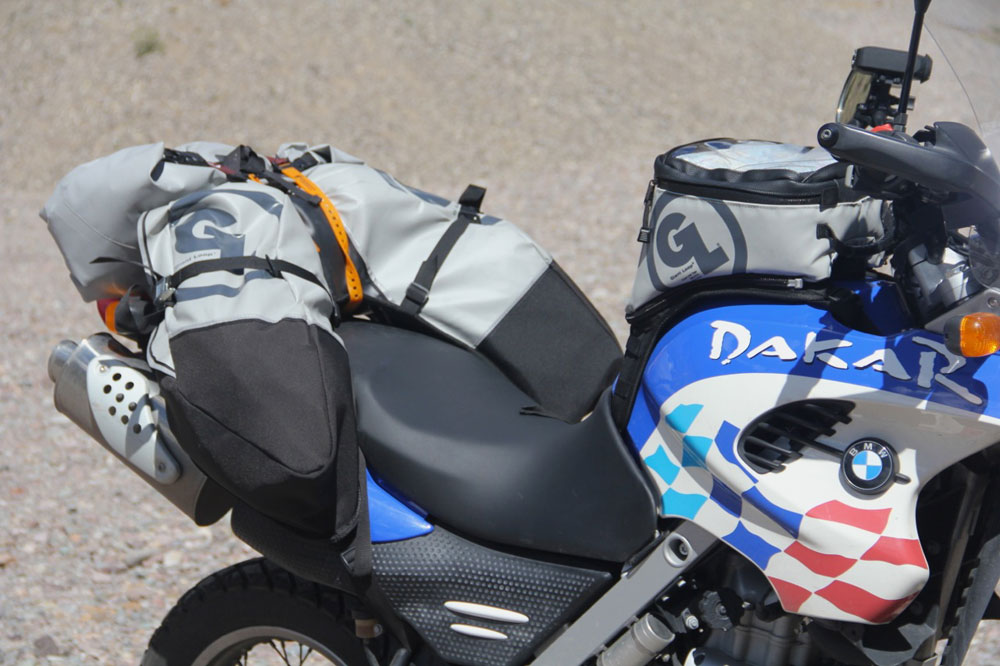 As part of my “fly and ride” luggage, the Giant Loop Coyote bag was a perfect solution. I simply checked the Coyotoe bag for the flight out. It kept my gear bone dry through some days with as much as 5 inches of rain falling on my head. The Rogue Dry Bag was also a much appreciated addition. I trusted it to keep all of my camera gear dry, and it did the job beautifully. 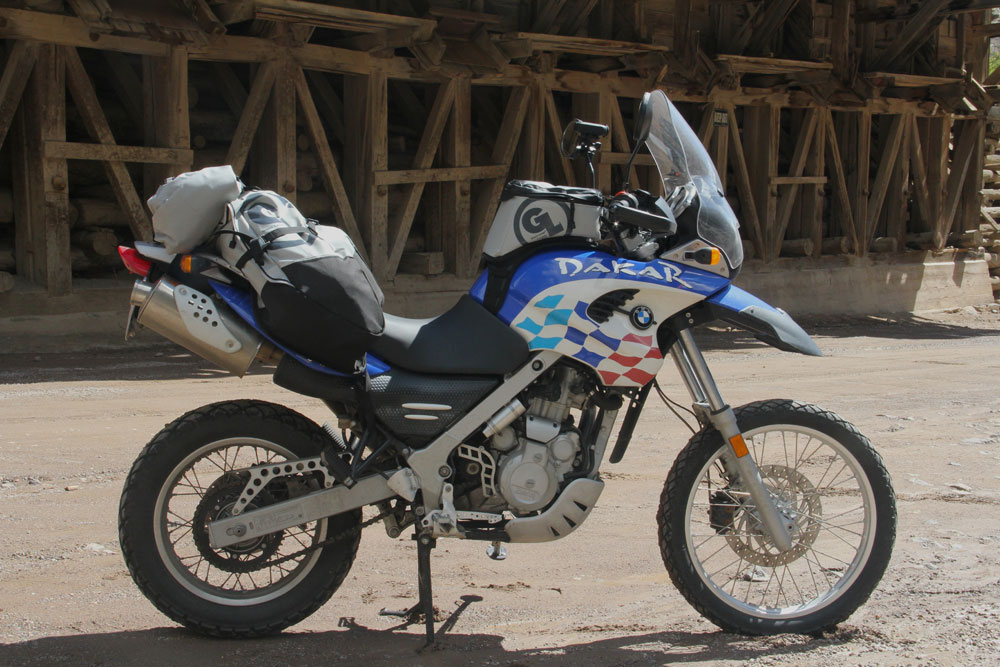 In the span of three days, I had ridden our new project bike through shin deep water, over 12,000 foot high mountain passes, across miles of interstate slab, all the while being crushed by torrential rains. Cruising across the high deserts of Northern Arizona, the needle firmly rested on 80mph, I decided this was easily one of the more enjoyable bikes I have ever ridden. It is the perfection of average, and perhaps that’s why it is so great.

As of today: I’ve logged 1378 miles on the new Expedition Portal Dakar. Let the adventures begin.