Norway is lucky to have some of the most spectacular scenery in the world. It is a landscape of extremes, where snow-capped peaks plunge into icy fjords, and quaint fishing villages bask under the ethereal glow of the aurora borealis. Because of the almost never-ending scenic vistas, the Norway countryside is a fitting setting for many unique architectural endeavors, of which there are no shortages.

The glass cabin, which is located in Northern Norway, is the private wilderness retreat of Frode Danielsen and Tone Beathe Øvrevoll (originally sweethearts during the conception of this project and now happily married). Working with award-winning architect Snorre Stinessen, the two conceived a home that would be a welcoming place, one that celebrates and complements the mountain and fjord views of the surrounding landscape. The culmination of their collaboration, the Efjord cabin, is comprised of two main volumes. The larger space is divided into two floors, with sleeping areas and a sauna while the second, smaller volume, functions as an open-plan living area with dining area and entertaining space. Huge floor to ceiling windows provide expansive views in all directions. 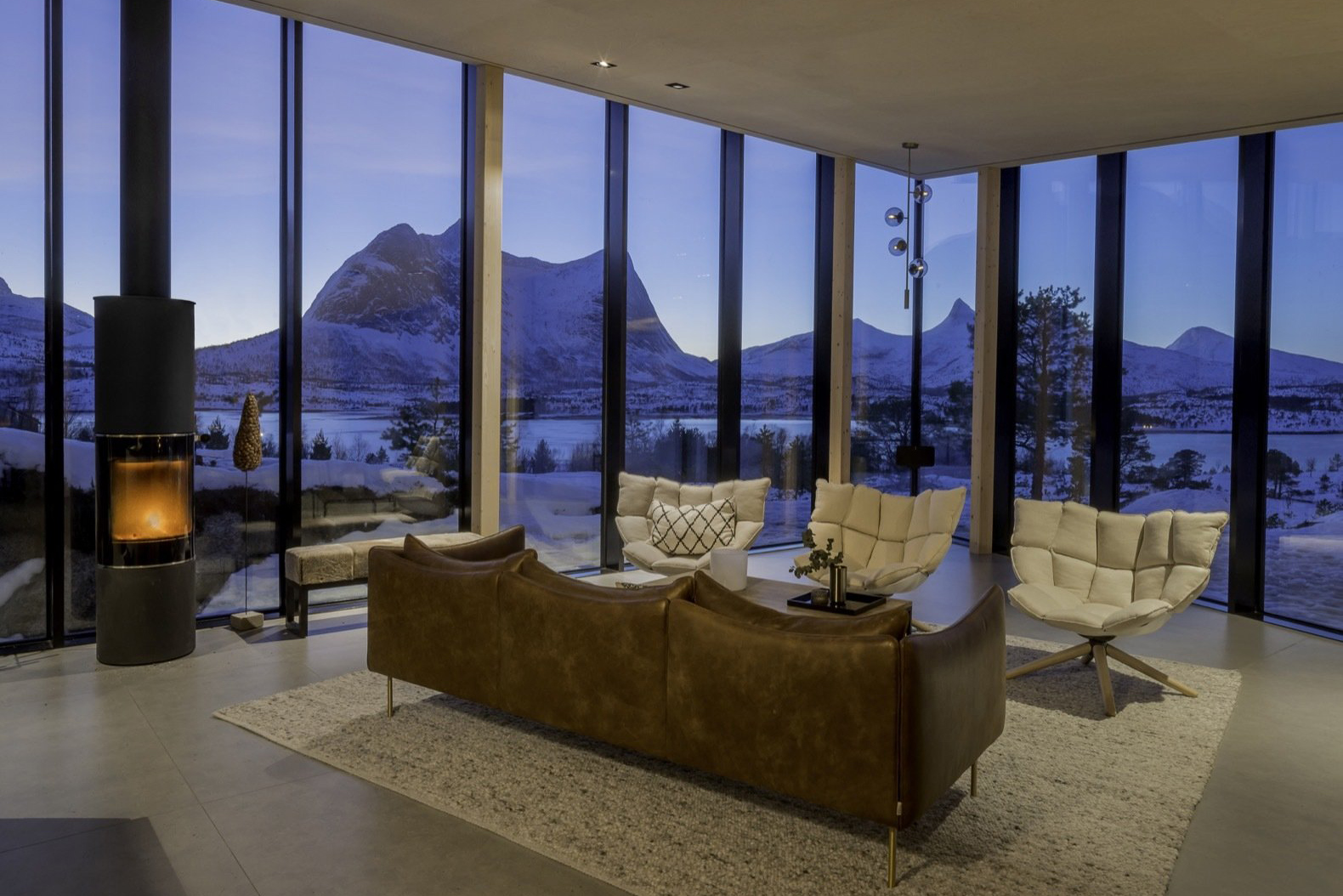 Due to its remote location on Hallvardøy Island,and also because there is a lack of prior development there, getting approval for the Efjord Cabin on was no small task for Frode and Tone. The couple worked closely with the Ballangen municipality to create a zoning plan for the homesite. They chose a flat building area that required minimal site disturbance to lay the concrete foundation for their project. They oriented their dwelling to take advantage of passive solar heating and utilized triple-glazed windows to trap as much heat as possible, reducing their need for supplemental heat sources. The building was also located between two large stone outcroppings which informed the overall design.

“The shape of the building is both a dialogue with the close natural formations, but also with the larger landscape. Its functional aspects create privacy and indoor/outdoor connections to different zones around the building,” said architect Snorre Stinessen.

Utilizing as many local materials as possible in the construction of the Efjord Cabin was a priority for the owners. They sourced local core pine and birch veneers combined with glass, steel, and tile to create a warm and inviting home that is in harmony with its surroundings. 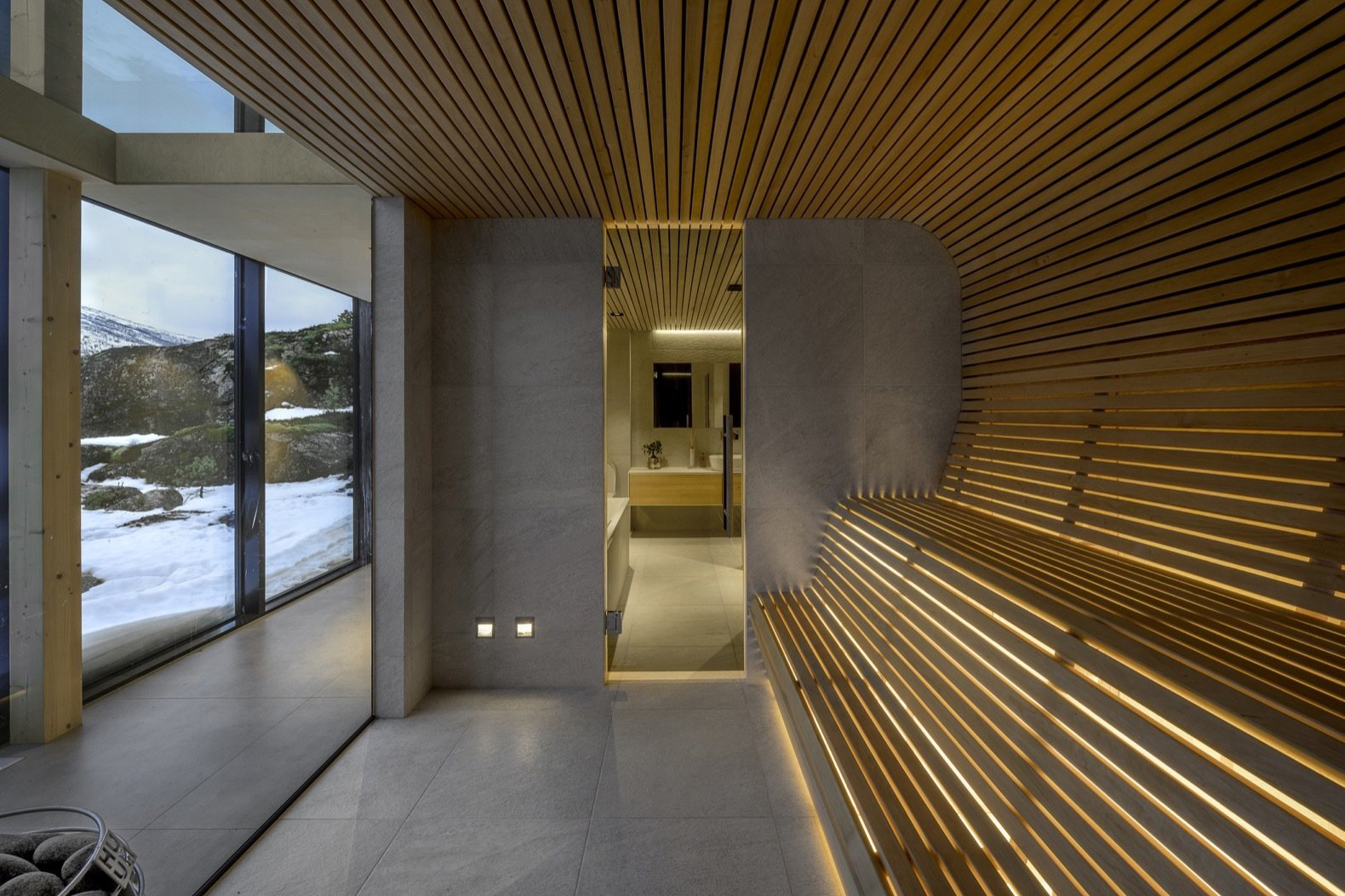 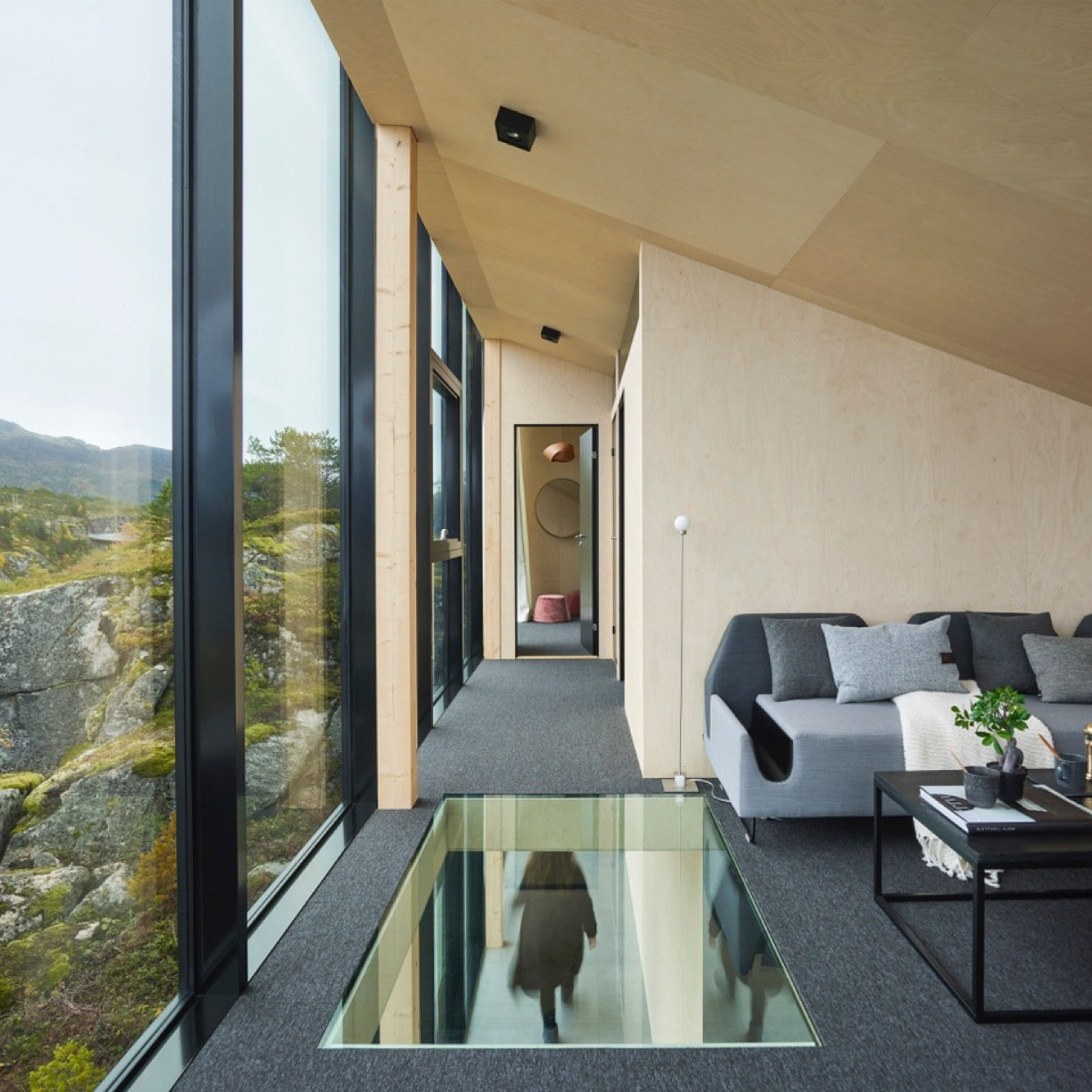 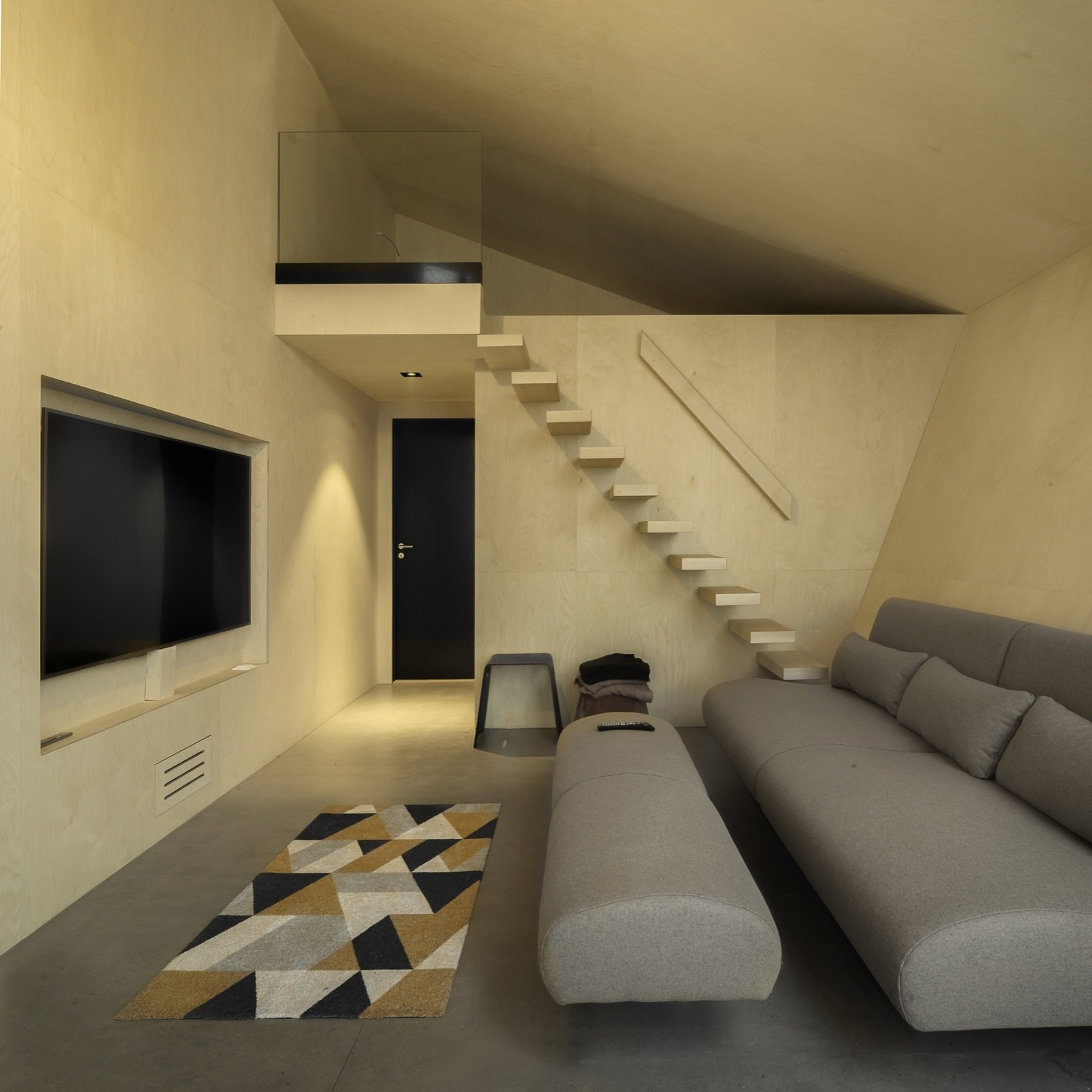 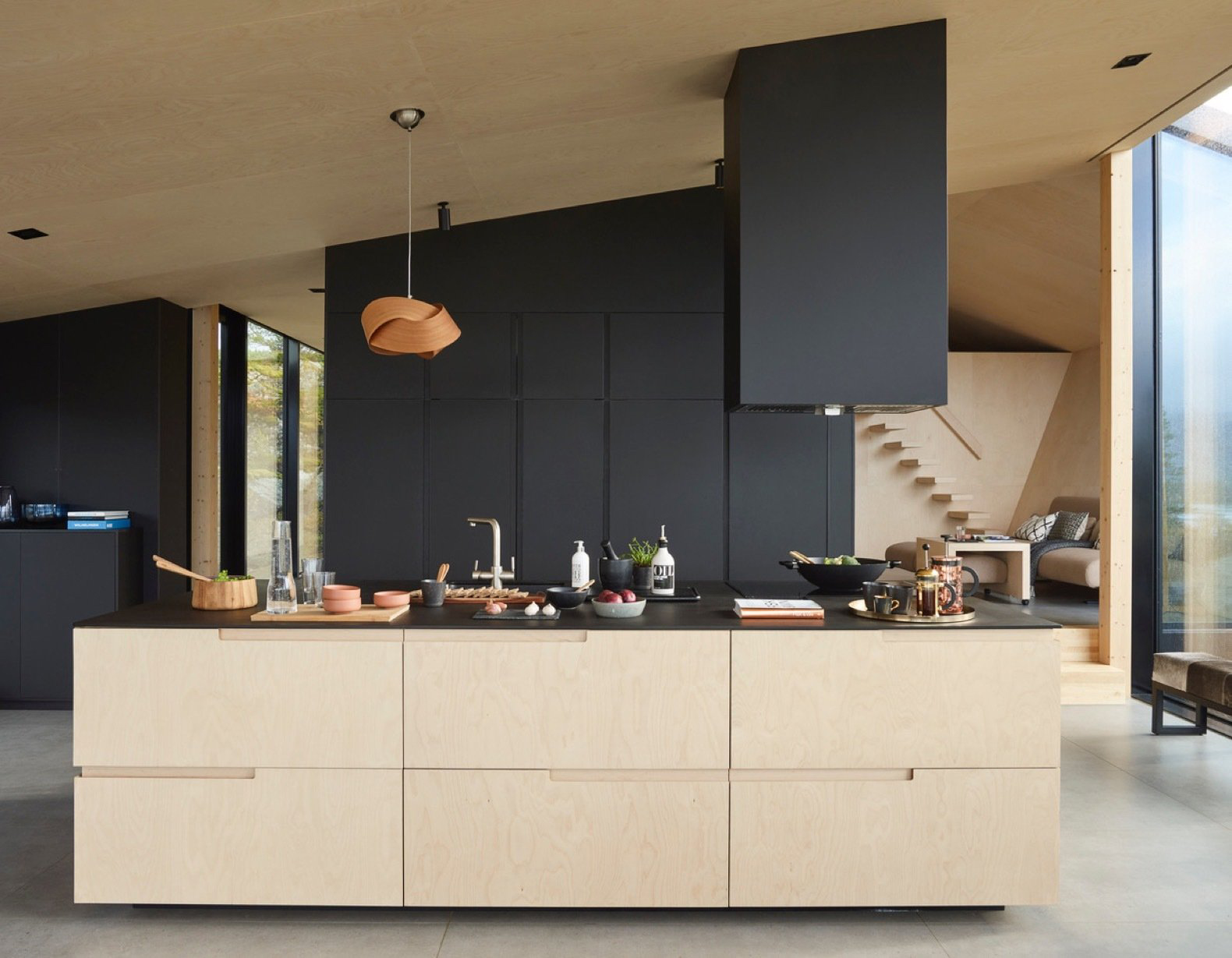