As I write this, we’re in the middle of a heatwave in the Pacific Northwest. Temperatures last week got to over 100°F (38°C). When I didn’t want to cook and phoned a local brewery to get take-out, they were closed because it was 130°F (54°C) in the kitchen, and the staff was feeling sick. Air-conditioning isn’t common in the PNW; it rarely gets hotter than the high 70s here, even in the dead of summer—and that’s just how we like it.

This heatwave, however, coincided with the only weekend my husband and I could get away together on our bikes. Although it seemed insane to expose ourselves to such heat, we were also looking to escape our baking house and find some cooler mountain air—somewhere with a lake or river. The only place to be in a heatwave.

On hot summer days, I’m reminded of a few years ago when a motorcyclist was killed near where my parents live in British Columbia. According to his riding partners, after sitting too long in a construction lineup, the man started suffering from heat exhaustion. Making a split-second decision, he pulled out of line into the vacant oncoming lane, trying to get to the front so he’d be first to get going again. At the same time, a Jeep pulled a U-turn into the oncoming lane, deciding to go back to town to wait out the congestion. The driver had failed to do a shoulder check. When the rider T-boned the Jeep, he was catapulted into the ditch and died of his injuries.

“Ride safe,” I told Dave. My husband never did well in the heat. I worried he’d get impatient with the inevitable slow stream of single-lane vehicles making their way to higher ground along Highway 20 that Saturday. 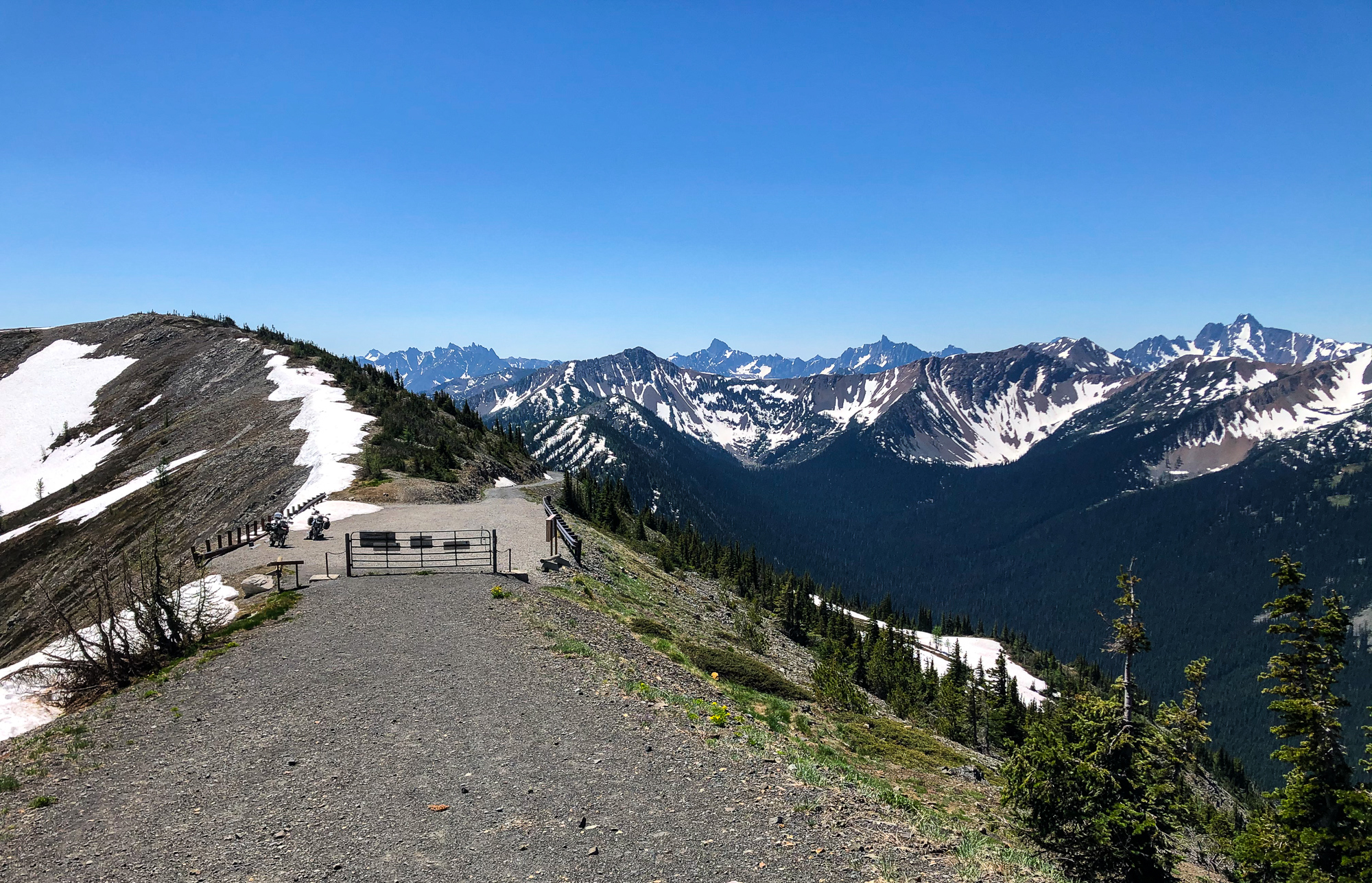 Getting to our high point, where the air was much cooler, and there was still snow 🙂 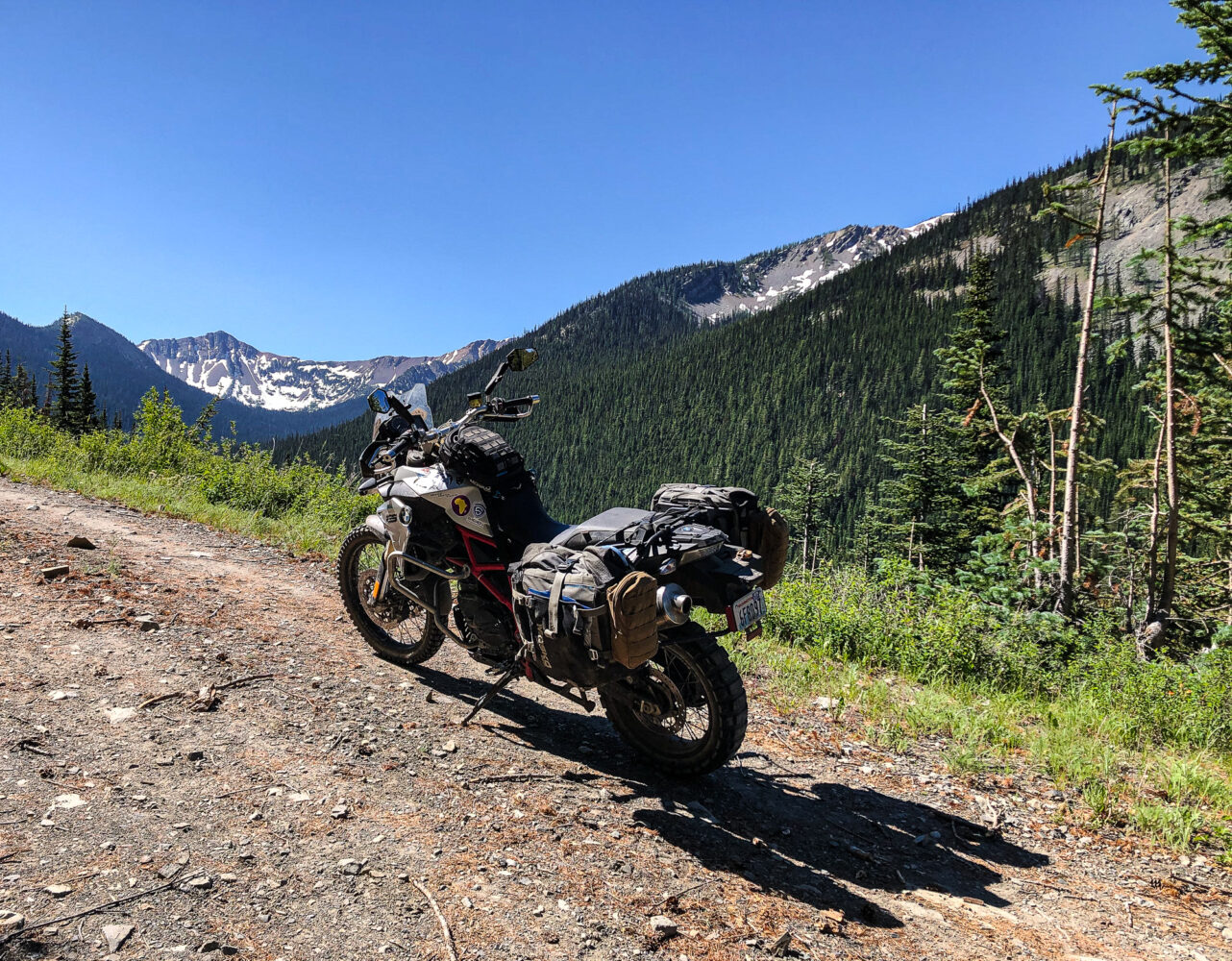 Dave and I have ridden together through very hot temperatures in Central America and Africa. As we were about to find out, though, our hottest days on two wheels were going to be this weekend, where the temperature gauge on our bikes topped out at 111.4°F (44°C).

Staying cool, both mentally and physically, is tough in extreme heat but necessary. For me, the only thing that helps is maintaining a wet layer against my skin. Before we left our driveway, I turned on the hose and let the spray land on my head, neck, and shoulders, feeling the cool water trickle down into my boots. The morning was already in the high 80s. Dave soaked his shirt in the bathroom sink. We both drank fluids with electrolytes. The night before, I’d filled my water bladder and stuck it in the freezer, so it would be a solid half-gallon block of ice keeping my water cold on the ride. 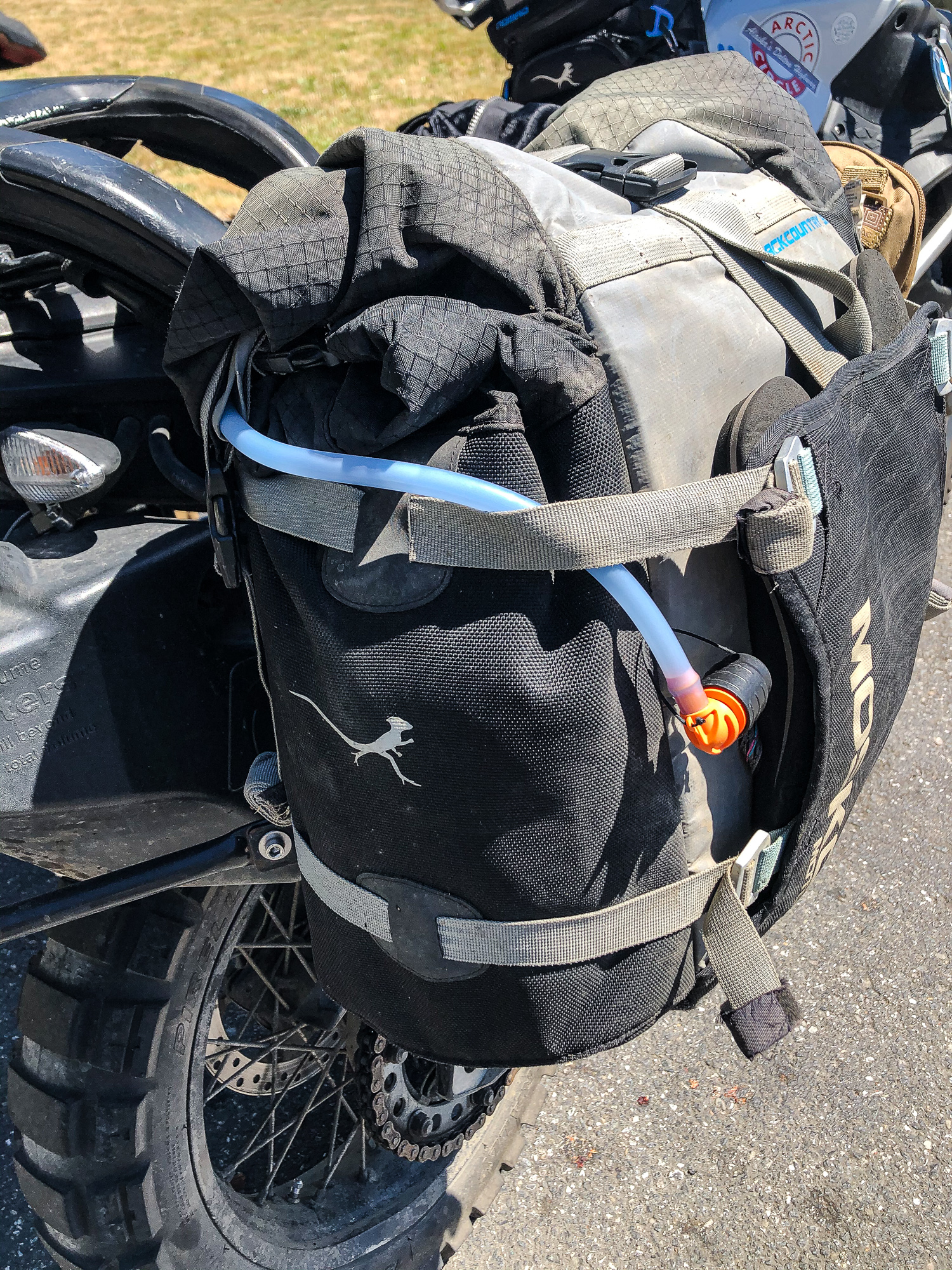 I froze my water bladder the night before, then put it in a pannier. Six hours later, I still had a chunk of ice inside, keeping my sips ice cold.

Throughout the weekend, Dave and I sought every opportunity to cool down. When we stopped to gas up in Sedro Woolley, I noticed a staff member emptying the station’s ice chest on the grass behind the building. I grabbed a few handfuls and shoved the ice down the back of Dave’s shirt, laughing at his sharp intake of breath. Going back for more, I rubbed my head, neck, and arms, then placed a few blocks at the small of my back. The zipper keeping my riding pants attached to my jacket trapped the ice there, and its cool dripping lasted over 20 miles to Concrete, where a roadside digital sign told me it was 107°F (42°C). When we passed a waterfall pouring down a rock wall, we pulled over and stood under the cascade. At a river in a campground, we sat splashing the melted snow run-off over our faces. I even laid in the current, fully clothed. 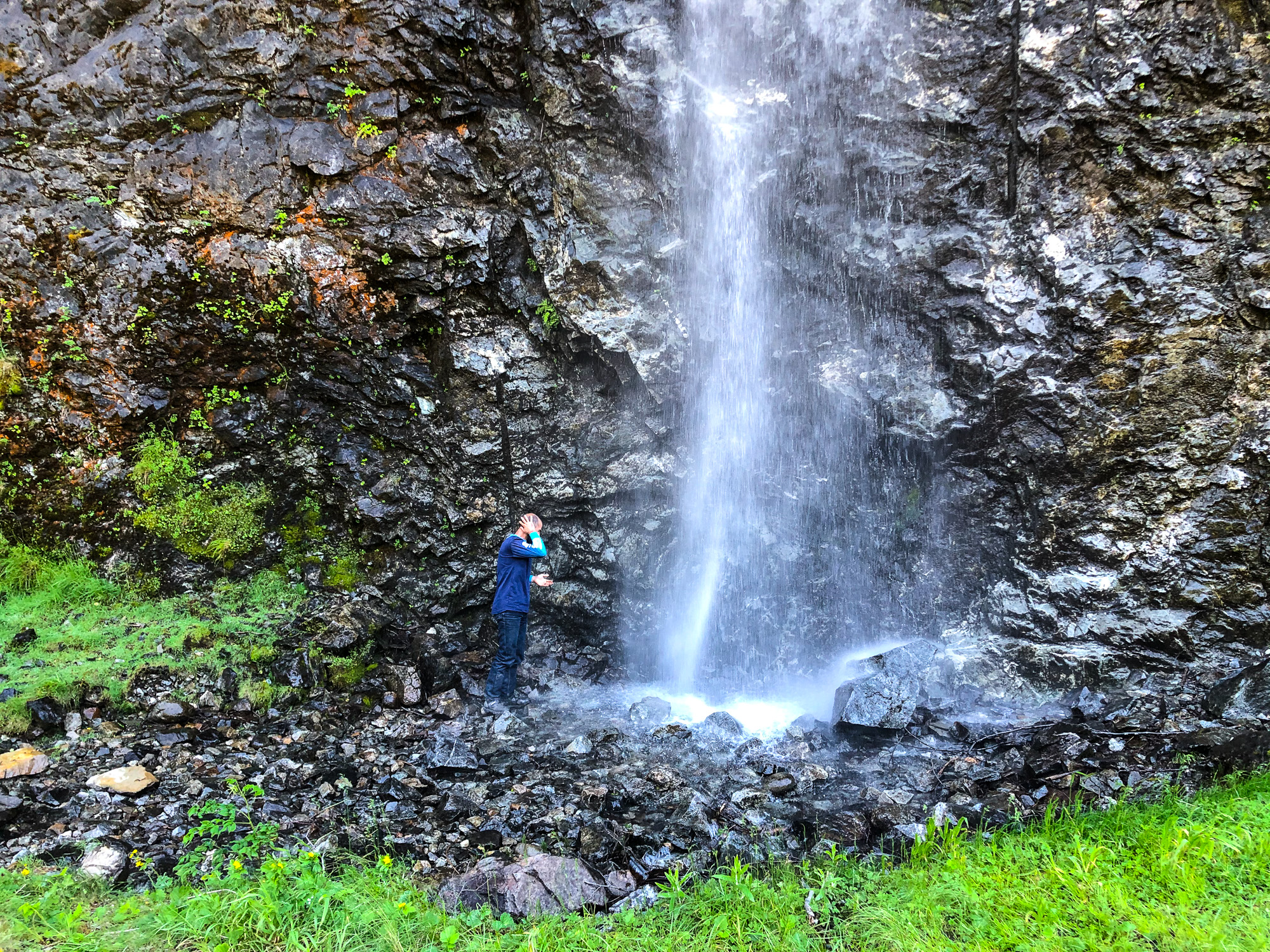 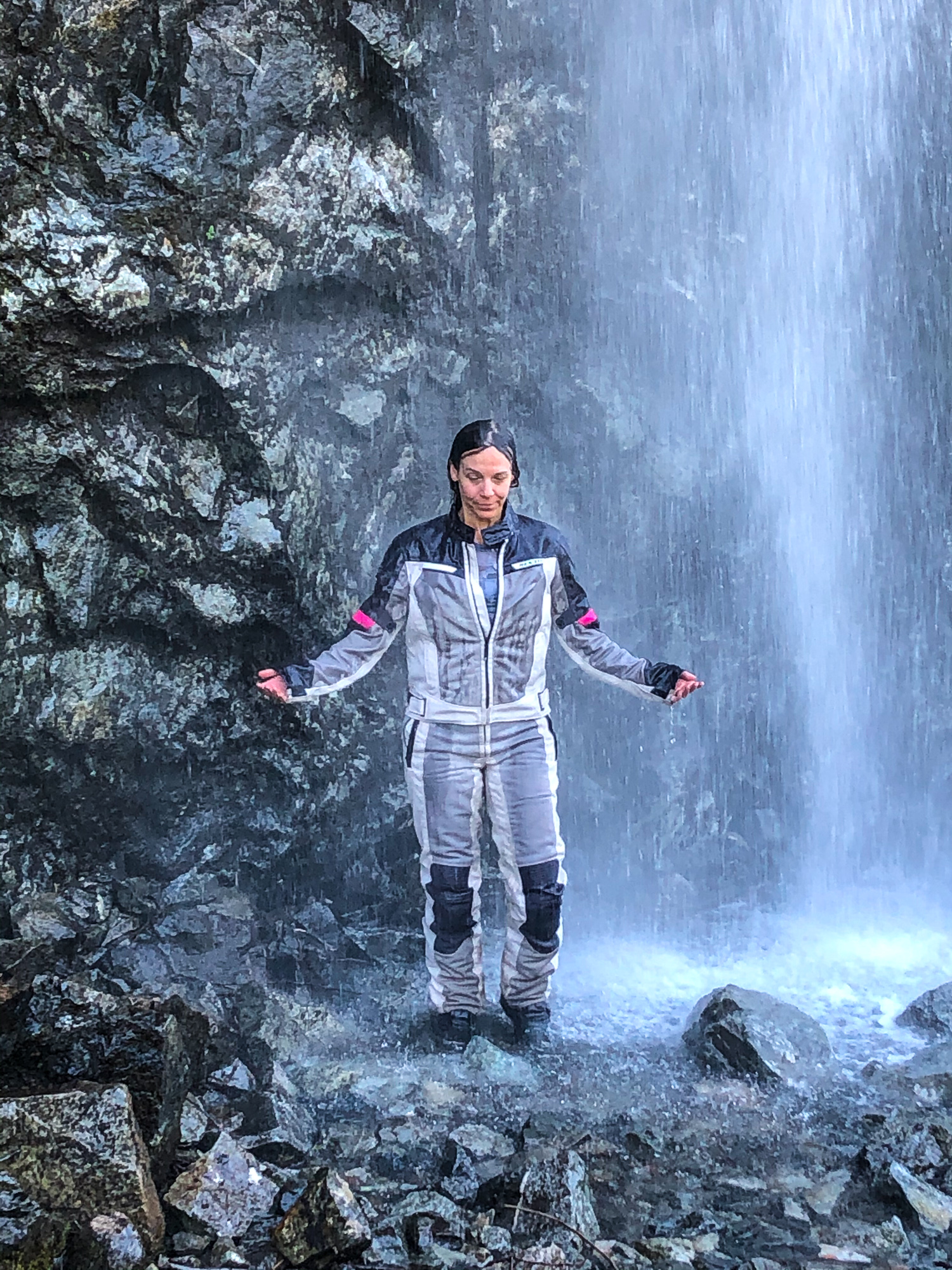 The best way to cool down and stay cool. After dousing myself like this, I was almost cold for an hour, even though the temps were extremely hot.

Not all riders have access to waterfalls, lakes, rivers, and creeks, so here are some additional ways to stay cool on the road.

Tips for Staying Cool While Riding in a Heatwave

Buy ice from gas stations
If you have enough room in your riding suit, fill some baggies with ice and zip them in. Small holes in the bags will ensure a steady stream of moisture dripping down. You can also freeze baggies of ice the night before your ride. Place some ice, bagged or not, in your helmet just before riding.

Hoses, taps, or sprinklers
I’ve heard of riders looking for parks being watered, then standing in the spray. Great idea. Dave and I have also used hoses at gas stations to douse each other. Public bathrooms have sinks; remove a shirt and stick it under a tap or re-wet your neck/head wrap.

Neck and head wraps
You can wet any type of fabric and place it on your neck or under your helmet: bandanas, shirts, even socks, or wrap them filled with ice. There are special neck coolers made with cooling crystals. The crystals turn into gel after being immersed in water and can stay cool for up to three hours. 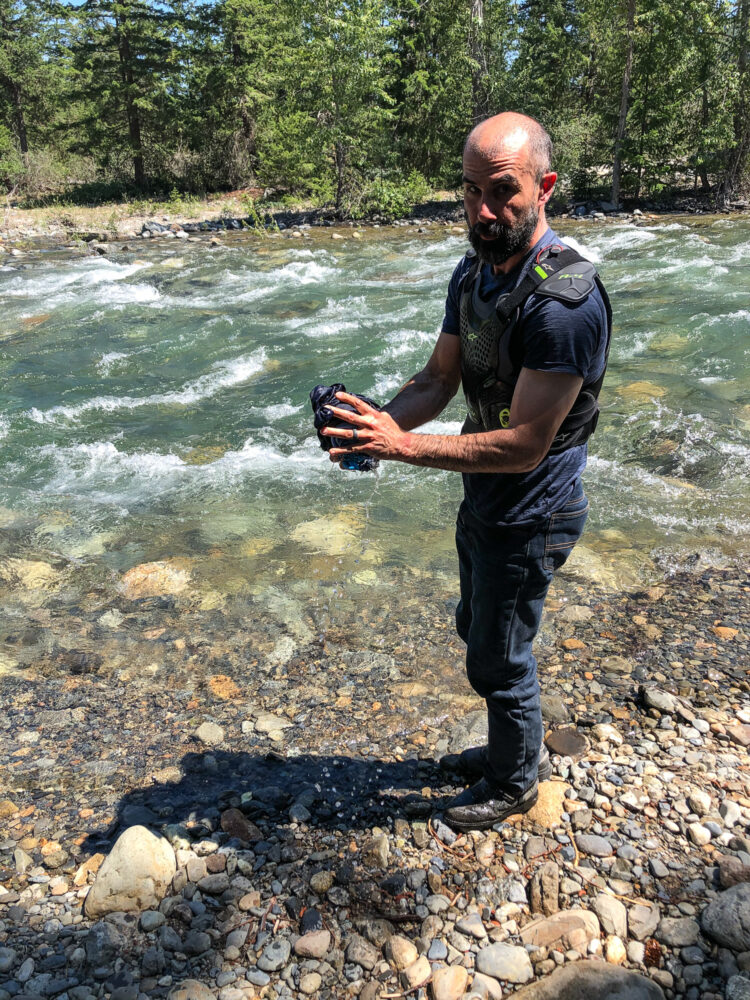 An over-heating Dave wetting his riding jersey in a cooling river. 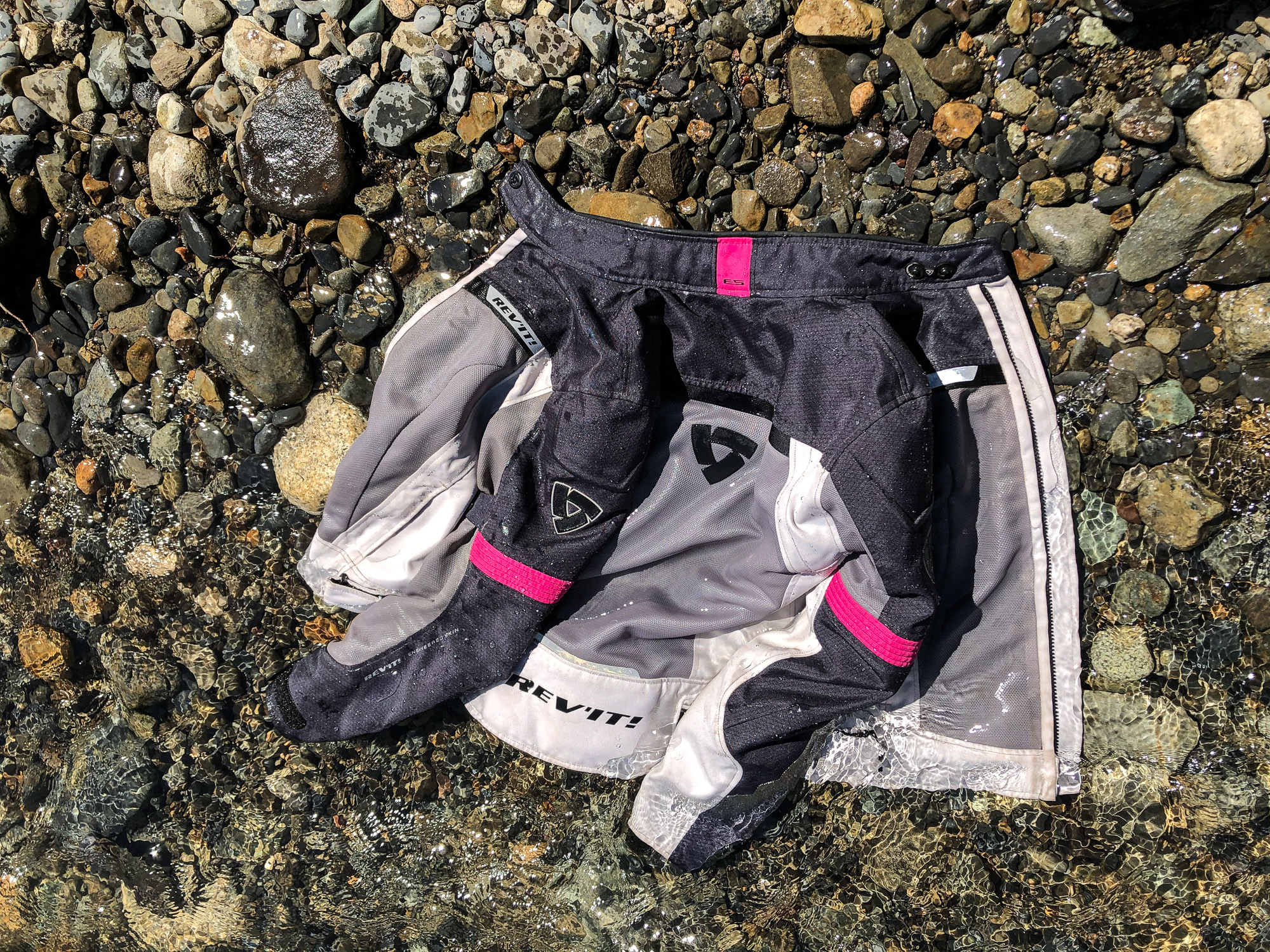 Saturating riding suits is a great way to stay cool on the road for longer than just splashing water on your face.

Wet your head
Our heads swell in the heat and can cause headaches. Cooling off our heads keeps us cool in more ways than one.

Cooling vests
Neither Dave nor I found these worked for us, but perhaps there are different brands or materials on the market today. The cooling aspect didn’t last that long, and then the vest just became another layer. I’ve also found them to get steamy rather than feel cool, especially in humid areas. This can make your skin prone to rash. Some riders love them, however.

Park your bike and gear in the shade
Nothing’s worse than coming out of an air-conditioned building to all your gear roasting in the sun. If that’s unavoidable, at the very least, clip your helmet on the shady side of your bike.

Light-colored gear, helmet, and boots
When possible, buy light-colored gear. I see so many riders in full black from head to toe. Not only does this make it hard to be seen [link], but black is a sun attractor.

Mesh riding suits
When Dave and I set off to ride around the world, we could only bring one riding suit. We chose our four-season ones because we were likely to be in cold, wet conditions more often than extremely hot. When we came home, I had a mesh riding suit waiting for me, which I used last weekend. The jacket and pants are cream-colored, and the air coming through the mesh makes it feel like I’m wearing shorts and a tank top yet covers me up for safety reasons.

Cover up!
It may sound counter-effective but exposing skin to the sun will not only increase your risk of sunburn from harmful UV rays, but it also removes sweat before it can cool you down. Covering up in a mesh suit, for example, will actually keep you cooler. Have a hat ready, too, so when you take off your helmet, you can keep your head cooler under cover.

Wicking underlayers
Merino wool sounds itchy and hot, but most brands these days make soft, thin layers that are the perfect layer under a riding suit, causing less odor and working their wicking magic. You can even take an extra step and put clothing in the freezer before riding.

Keep your visor down
I know, this seems unbearable, and anytime you’re stopped, you flip that plastic shield up. But while riding, hot air can burn your eyes and sap moisture from sweat, which cools you.

Beer fridges/air-conditioned buildings
Grocery stores, gas stations, cafes, banks—many parts of the world have public places with air-conditioning. Work it! Loiter away! If anyone asks you to leave, tell them you’re on a motorcycle and need to cool down or you could have an accident. I doubt you’ll be told to leave then. As I mentioned, we don’t have much air-conditioning where we live, but we do have walk-in beer fridges.

Unfortunately, in areas with high humidity, some of these cooling products will not be as effective, and really, the only solution is to get your ride over early or hang out somewhere with air-conditioning. Don’t get desperate and use your water bottle; you’ll need that to stay hydrated.

On that note, remember that all these cooling tips are only as effective so long as you are hydrated. Drink plenty of water and fluids with electrolytes [link] to replace your body’s natural salts that are sweated out.

Did I miss any other tips and tricks for keeping cool? Let me know in the comments below. If you can find snow, get there!