In 2015, I had some fuel buried in the Western Sahara by a Belgian couple on their way to Mauritania. A few weeks later, they sent a picture of a thorn tree with “CS” carved on the trunk.

“Mark two meters north, and dig,” it said. “We left you a mystery gift.” I nicknamed it the Dig Tree, recalling the historic 1862 landmark of ill-fated Australian Outback explorers Burke and Wills. My cache would enable a direct transit of the barren Western Saharan interior, an area I’d yet to explore. In 2017, aboard an agile Yamaha WR250R, I’d got close, but even with a sat phone, at the last minute, it felt too risky. Now I was back, riding a Himalayan, Royal Enfield’s first new model following decades pumping out the aged 350/500 Bullet single. “Always sick, never terminal,” was how one owner described her Bullet. In India, they’re ubiquitous, and every village mechanic knows how to fix one. Elsewhere, they’re an eccentric choice— you want something else in the garage. 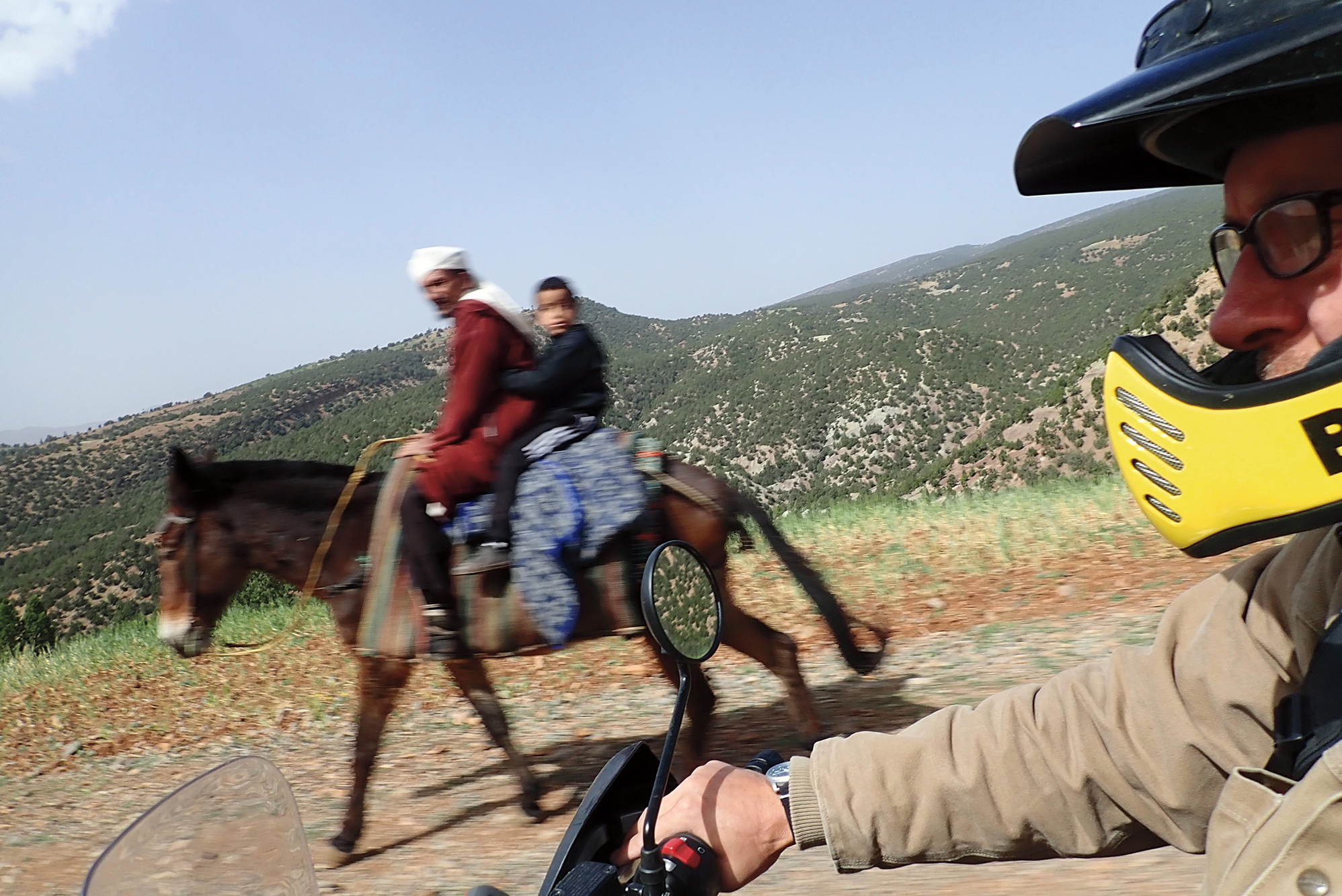 The unproven Himalayan was also a gamble, but Eicher Motors (who also own Jaguar Land Rover) had invested heavily, and Royal Enfield was moving on up. Rather than aping the adventure motorcycling trend, with the Himalayan, they’d plowed their own path. The revised export model of 2018 was a simple, air-cooled, dual-sport—well-equipped and at an unbeatable price. In Western markets, including the US, sales had taken importers by surprise. I saw the potential too, fixed one up, and set off for Morocco around Eastertime.

Over a fortnight logging new routes in the High Atlas, the Himalayan exceeded my expectations. On paper it’s unimpressive: a slow revving, long-stroke, 411cc motor making just 24 horsepower propelling a kerb weight of 425 pounds, nearly the same as a CB500X. But riding was believing—the torquey, injected single recalled the steady plodders of Royal Enfield’s distant heyday, but without the vibration. The suspension is basic but compliant on a chassis designed by Harris Performance (now owned by Eicher, but legendary even when I was a biking teenager). When combined with the accessible 31.5-inch saddle height (hallelujah), it makes for a satisfying and effective all-road travel bike that doesn’t really have any direct competitors. 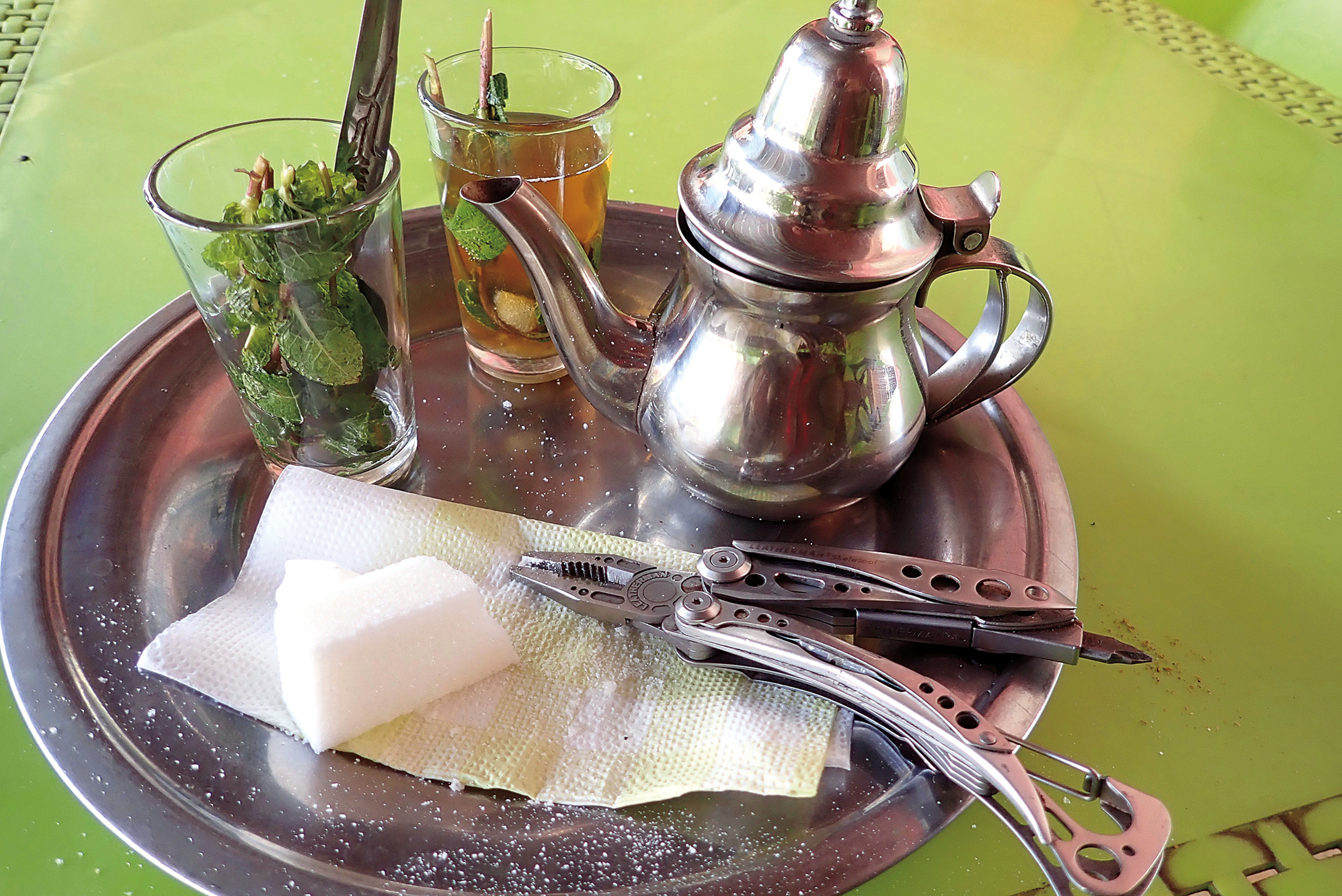 Most maps depict the Western Sahara as a distinct territory, suggesting a border just below the 28th parallel. Up to 1976, this was the Spanish Sahara, but upon Franco’s death, the Spanish swiftly pulled out, and the Moroccans rolled in just as fast. The colony’s indigenous Saharawi had no say. The Polisario guerilla war ensued, and Morocco prevailed, gradually extending a 2,000-kilometre-long berm which divides the territory. Since then, Morocco has established a firm foothold in its coastal sector. East of the heavily mined berm is the barely developed and little-known Saharawi Arab Democratic Republic. On either side, UN peacekeepers police a ceasefire. The reason maps don’t depict this reality is doing so would legitimize Morocco’s annexation. 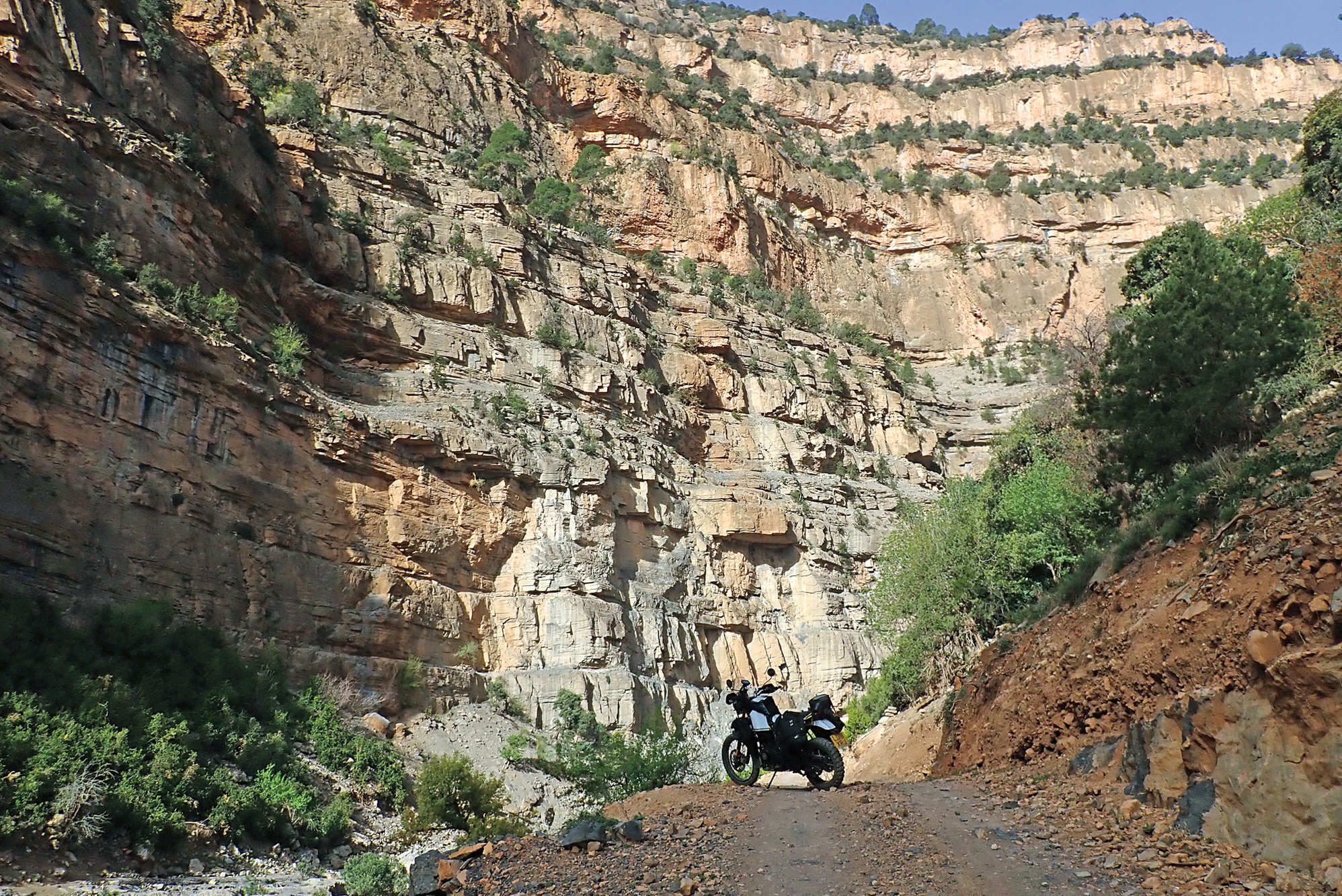 The Dig Tree provided much-needed motivation to visit the Western Sahara—a dreary, windswept limestone plain menaced by unexploded ordnance (UXO). Until the colonial era, even the Saharawi kept to the less-arid coast, preying on ship-wrecked mariners, as Dean King’s Skeletons on the Zahara vividly describes. Today, the coastal highway is the main road to Mauritania. Few tourists venture inland, but Mark and I were curious to see it for ourselves. Colin had never been to Africa, let alone the Sahara, and was along for the ride. 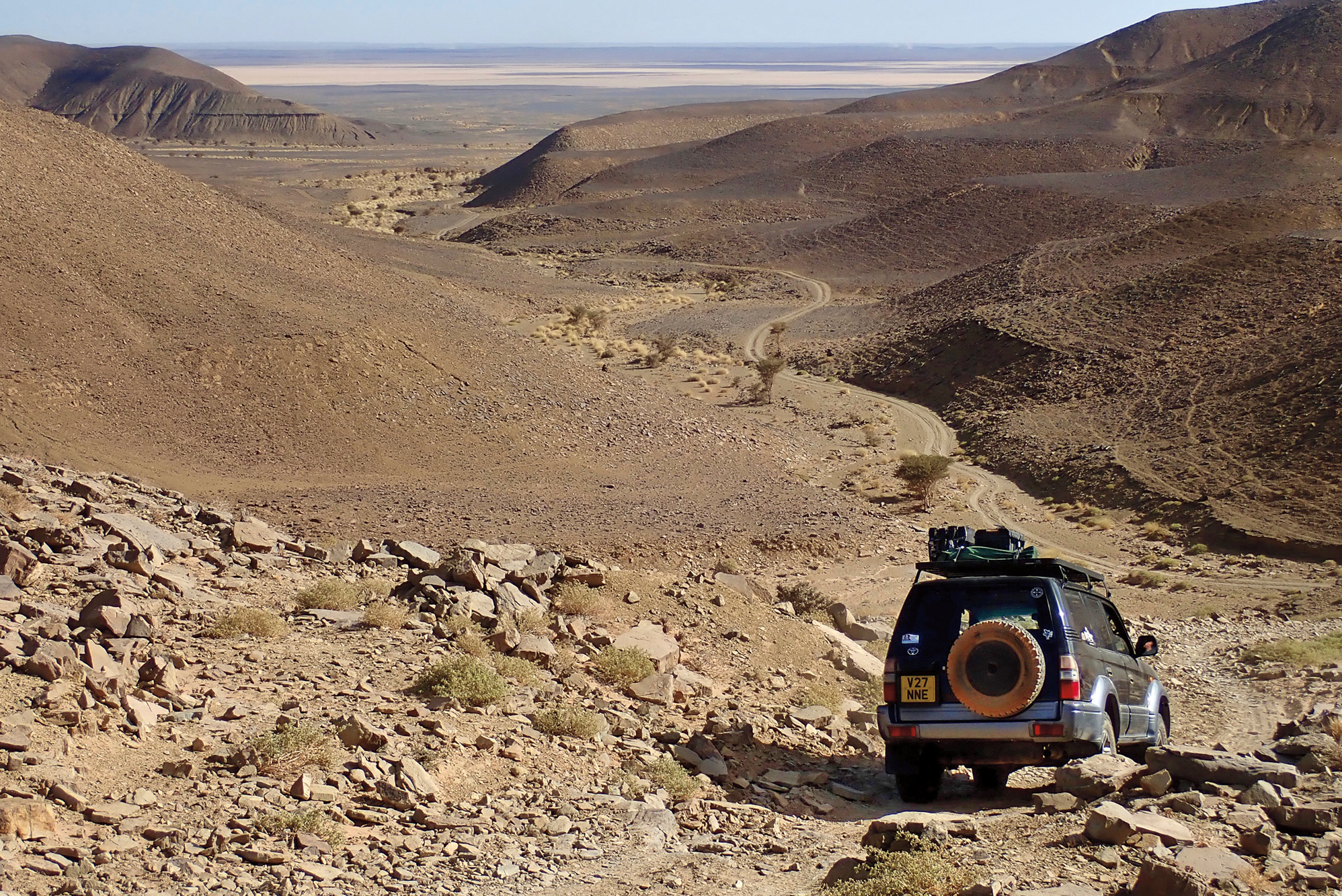 Mark knew well how quickly things could turn sour out here. Last year, he’d been heading into the interior when an 80 Series in the party suffered an electrical short—a not uncommon occurrence on corrugated desert trails. Before assorted extinguishers could make an impact, the merciless harmattan wind had whipped up the fire; in 10 minutes, the vehicle was lost in a shroud of flames and exploding components.

We met up in Assa. Compared to the Berber communities of the Atlas, the vibe here was different. Inhabited by Arab descendants of nomadic Bedouin and Yemeni incomers, a Saharawi might roll in with his ancient Land Rover loaded with camels, trade them for some flour, oil, and sugar, then head back to his desert camp. After fueling up, we too picked up some last-minute provisions for our four-day drive to Dakhla on the far southern coast. 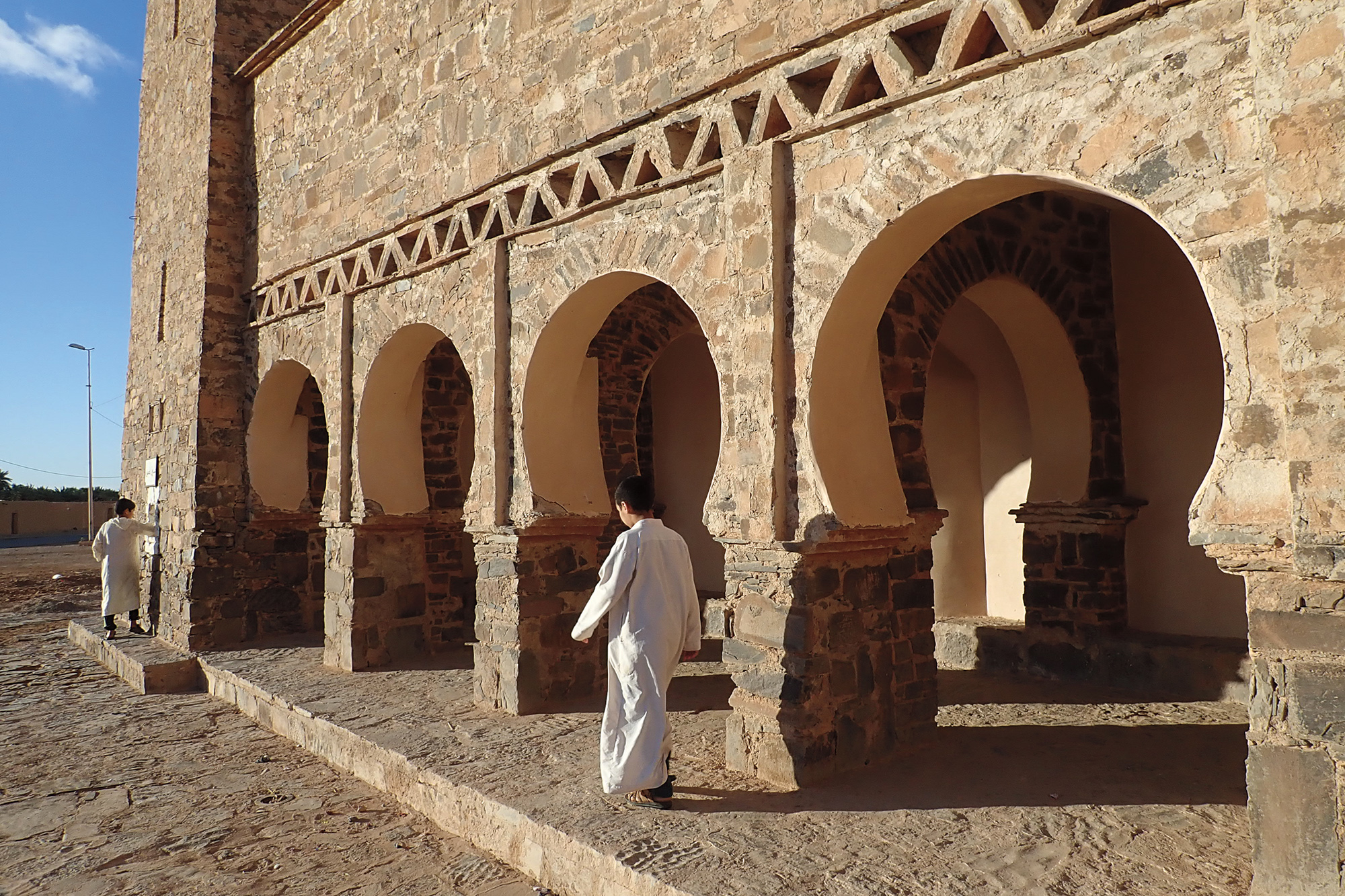 When the tarmac ended, we joined an old Dakar Rally route from 1995, traversing a low plateau dotted with flat-topped mesas, as scenic as things would get. Most of the time, the riding was easy enough, but at a sandy gorge, I quickly reached the humble Himalayan’s limits and needed a push. Even aired-down, the bike had the torque but just too much weight, and the chain was jumping over the engine sprocket before the wheels turned. Two years earlier, alone on the Yamaha WR, I’d made an even bigger mess of it and battled for hours to get through. 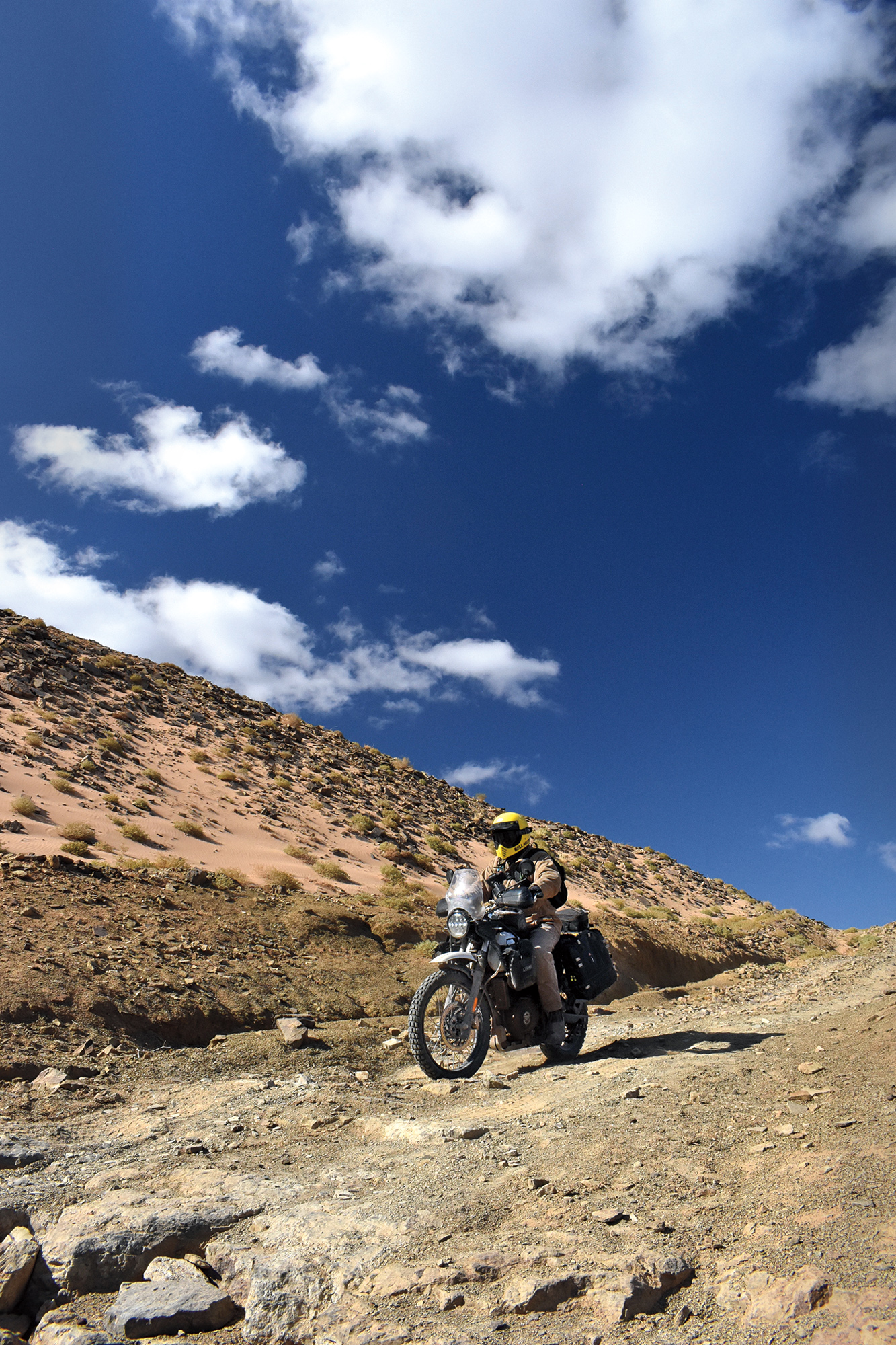 In the central Sahara, usually, the wind blows by day and drops off at dusk, making ideal evening camps. But here, northerlies raced across the plain day and night, so even the few trees grew crooked, bent to the south. We dropped off the plateau to a vast clay pan, hoping the escarpment would provide a sheltered niche—no such luck. The car was all the cover we’d get, so when the time came, I piled a windbreak around the Toyota’s front wheel and hunkered down for the night. 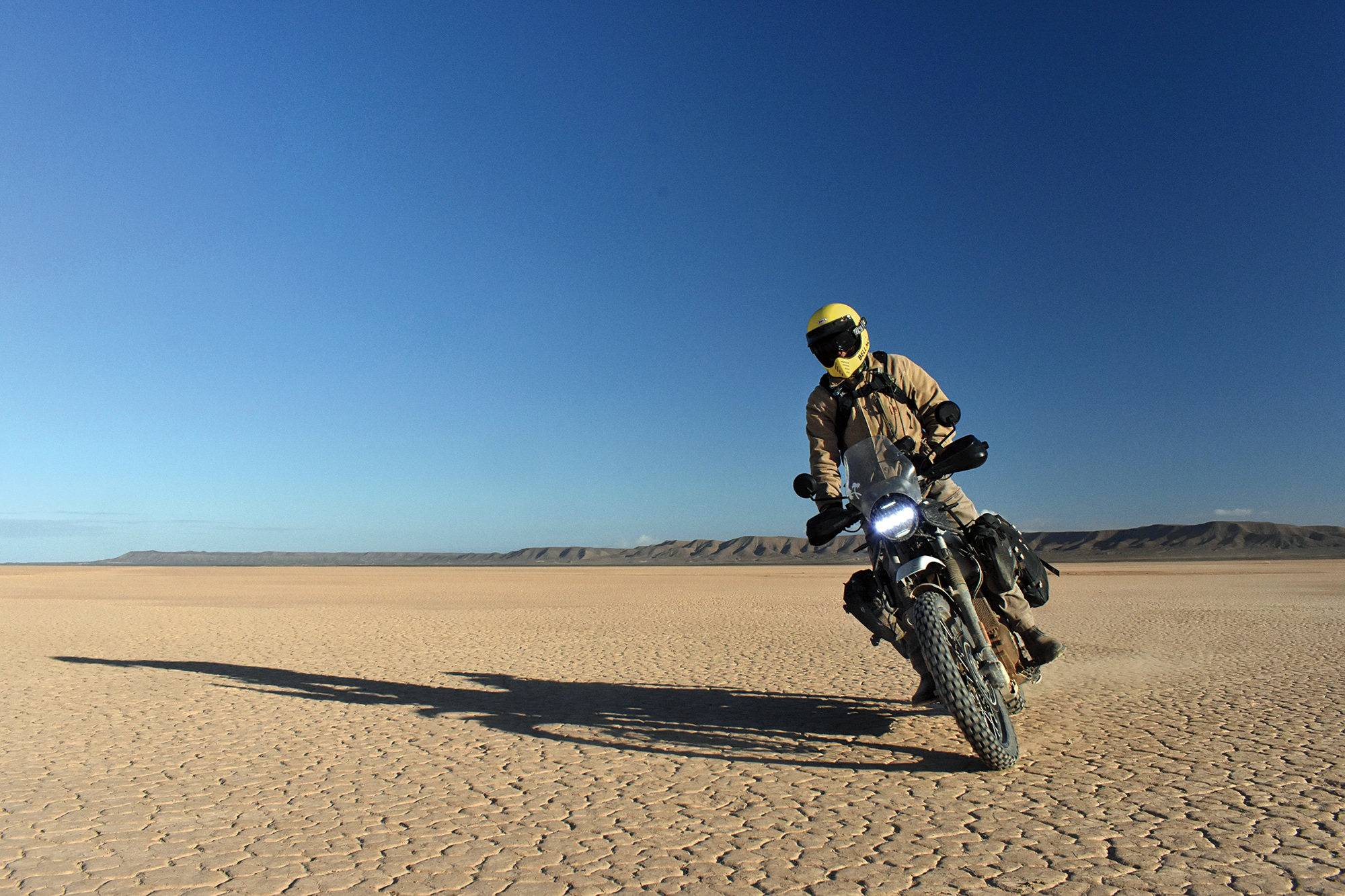 By lunchtime the next day, we’d passed through various checkpoints to grab lunch in Smara, a lively garrison town close to the berm. As elsewhere out here, subsidies encouraged northerners to relocate and help populate the territory. By afternoon, we were on the main 700-kilometre stage, kicking up dust across the flat landscape. Dakar route-marking mounds occasionally appeared by the track as well as minor berms—relics of the Polisario conflict. 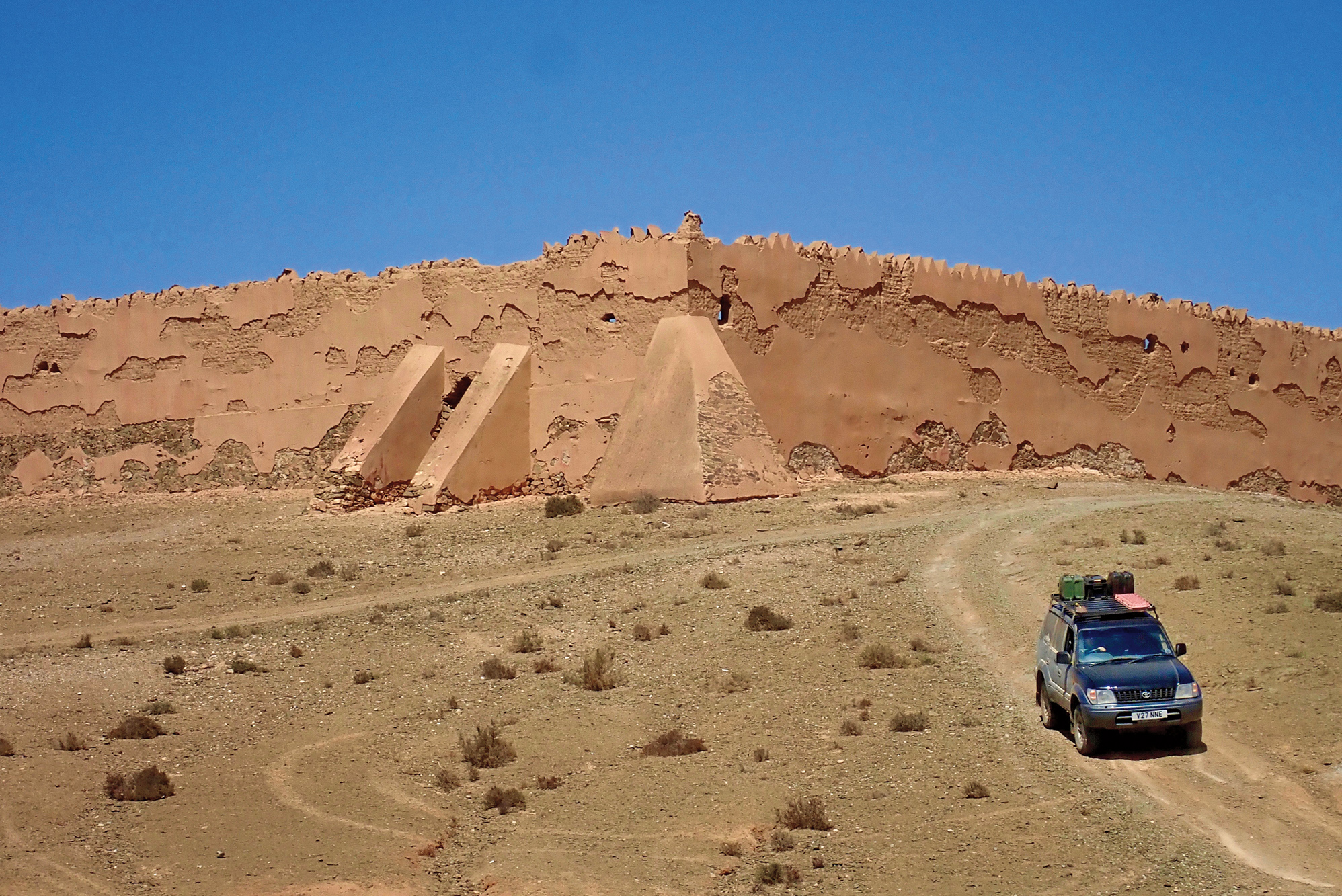 As the sun dropped, I spotted a stone building to the east. We drove over to investigate, hoping for shelter from the gale, but as we approached, we realized it was a tiny watchtower perched on an unusual double berm. Wary of the risk of landmines at such places, we proceeded on foot, stepping round barbed wire and over sardine cans. There was no respite here, so we continued to a grove of acacias where Mark stretched out inside his Land Cruiser while Colin and I spent another night huddled by our respective wheel arches, waiting for the dawn.

Before leaving, I’d converted my spoked wheels to tubeless, on the front reluctantly fitting a Tubliss liner for want of a properly sealed rim, as on the rear. In recent days, I’d noted sealant fluid leakage around the high-pressure valve and was keeping an eye on it. But the next morning, just 110 kilometres from the Dig Tree, the Tubliss core lost pressure, and the tyre went with it. Knowing a repair to the 100-psi core would need to hold for hundreds more kilometres, we mulled over recovery options: backtracking 250 clicks to Laâyoune on the coast was best. How, we’d yet to work out. Out of the blue, a Saharawi turned up in his decrepit 109-inch pickup, but a visit to Laâyoune didn’t sit well with the desert nomads. 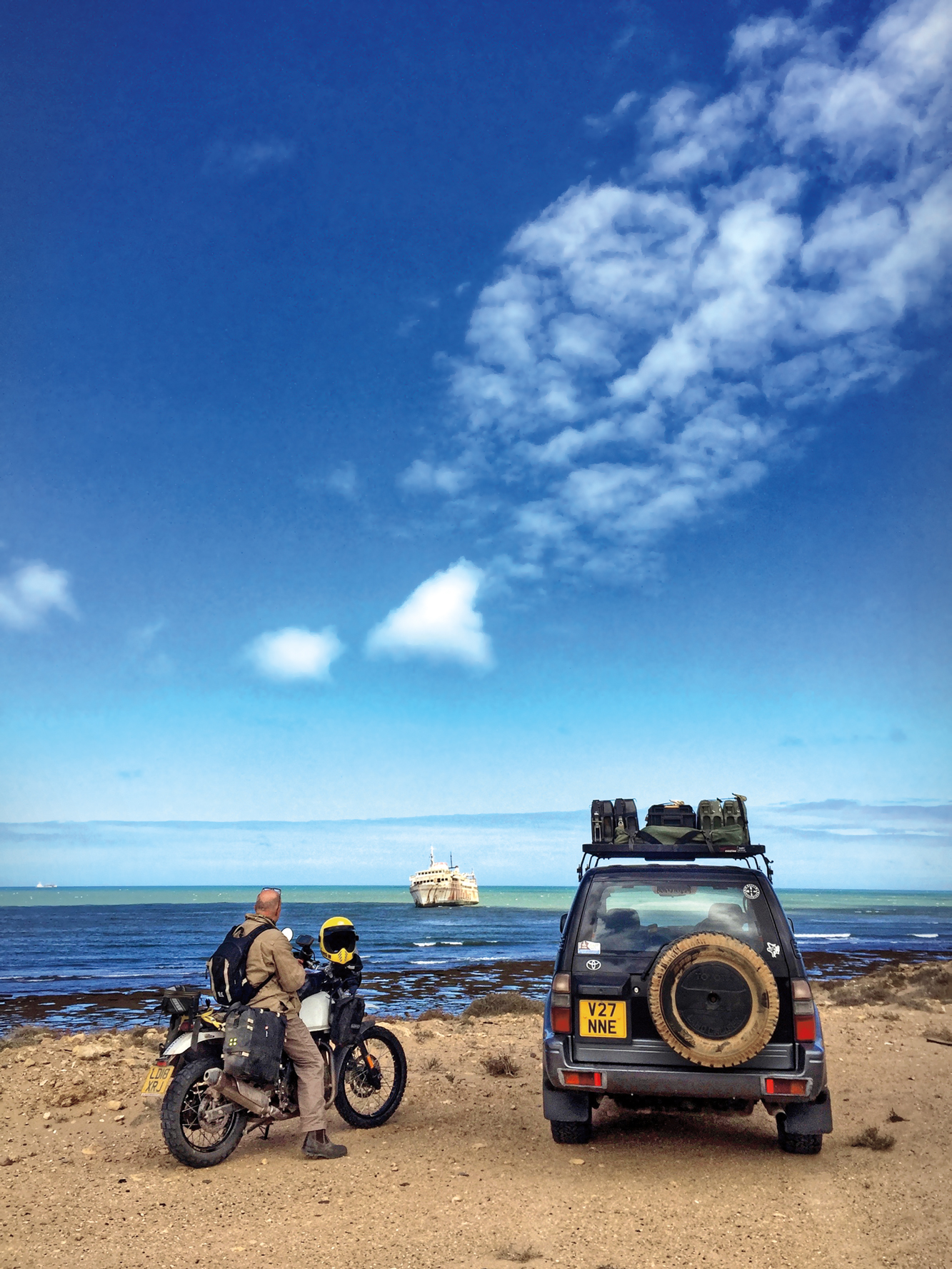 Ironically, the ruined Tubliss proved to be its own solution: the core effectively turned the Michelin into a run-flat tyre. At 30 mph, it was a slow ride to the coast, and by the time the wheel was fixed up, we needed a plan B. I couldn’t afford to miss a tour group of mine arriving in Marrakech in a few days, so we turned back north.

Remote desert travel is a tightrope, and experience provides lessons on how to catch a fall. Whether it’s a blazing vehicle or minor tyre problems, until you end up like Burke and Wills, a solution is always found. And the Dig Tree? That will be there next time.

Chris Scott is an award-winning, UK-based adventure travel writer who specializes in the Sahara; he’s visited over 40 times since 1982, from the Atlantic Ocean to the Red Sea using motorcycles, 4WDs, a jacked-up Mercedes sedan, local bush taxis, and camel caravans. Chris’ desert films have been featured on the National Geographic channel, and for many years he updated the Outback regions of Australia for Rough Guides. His books include Sahara Overland, the Adventure Motorcycling Handbook, and Overlanders’ Handbook. He recently published a short guide on Sahara camel trekking as well as The Street Riding Years, an urban memoir describing his life as a motorcycle messenger in 1980’s London. An Amazon bestseller, it was Ride magazine’s “Book of the Year.”