Iran teems with contradictions. Persian rugs are sold in bazaars next to knock-off American perfumes, chador covered women window shop for miniskirts, and the oppressiveness of the Islamic Republic is countered by the irrepressible optimism of its citizens. A country that’s been isolated by its own policies and years of Western sanctions (only recently lifted), Iran is cloaked in suspicion. Lois Pryce takes on theocracy, the passion of the Persian people, and her own preconceptions in Revolutionary Ride, the story of her inspired solo moto journey through Iran in 2013. 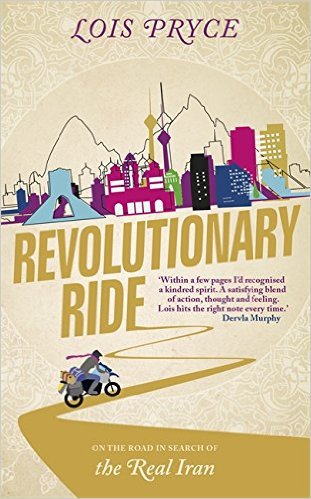 When Pryce parks her motorcycle in front of the closed Iranian Embassy in London during the height of UK-Iranian tensions in 2011, she’s intrigued when she returns to find a note posted to her windscreen. “Habib” implores her to visit his hometown of Shiraz, “famous as the friendliest city in Iran”. Curiosity turns to determination, and two years later, she finds herself on board the Trans-Asia Express making her way over the border to Tabriz, with her officially visa-denied motorcycle hidden in the goods wagon. A brush with a zealous, fingerprinting border agent on the train is at odds with the tea-and-sweets-bearing welcome the other passengers give her. The stage is set for an ongoing dichotomy Pryce confronts throughout the country. The Persians embrace her with food, laughter, encouragement, political discourse, and practical support. Nevertheless, the presence of danger from the Revolutionary Guards and their citizen militia, the Basij, permeates society and her own experience. Pryce swirls between the wholehearted warmth in which Iranians enfold her, and the need to consistently watch her back. It is a struggle shared by each citizen of Khomeini’s Iran, many of whom are vocal in their disgust for the Supreme Leader’s corrupt and brutal legacy.

As an anomaly, a British woman on a form of transport legal only for males, Pryce attracts constant attention. She is surrounded by enthusiastic support everywhere she rides. A family teaches her ta’arof, the ancient practice of hospitality. A young Kurdish woman, determined to escape Iran to pursue her education, tells Pryce of the growing restlessness of Iran’s young people. A taxi driver and veteran of the Iran-Iraq War shows her his city and brings her home for dinner. Required by law to wear a headscarfand a manteau over her riding gear, she is often encouraged to shed the get-up in the privacy of homes. Booze, the BBC, and iPhones proliferate despite their illegal status. It doesn’t take long for Pryce to learn the thriving black market is run by the Revolutionary Guards. We are left with the impression that ubiquitous oversized posters of Khomeini and his successor Khamenei hover on the edge of satire.

Pryce’s route goes from Tabriz over the Alborz Mountains and past the Caspian Sea into Tehran. Braving the city’s homicidal traffic (it boasts one of the world’s highest ratings for auto-related deaths), Pryce delves deep into the capital. She meets a once-famous Iranian explorer named Issa Omidvar, whose photos of bare-breasted indigenous women brought the wrath of the Republic upon him, and is shown a seedy side of oppression on a street where the teenage children of bureaucrats share drugs, sex, and hopelessness. Just as Pryce begins to settle into the affectionate connections she’s finding in Tehran, her host drives her down a quiet byway. She finds herself staring at the barbed wire perimeter of the infamous Evin Prison. It’s filled beyond capacity with thousands arrested during the Green Revolution protests of 2009, mostly youth whose names will be effectively and violently erased from the story of Iran. It’s a brick-and-mortar reminder that although many Iranians share a revulsion towards the Islamic Republic, Khamenei still controls the guns and the thugs who wield them.

From Tehran, Pryce travels to Isfahan and then to the Zagros mountains, home to the few remaining nomadic tribes that once populated the area. She survives an attack by a crazed meth-head on her way to Yadz, learning that this desolated area is the country’s hotspot for drugs and smuggling. When she finally arrives in Shiraz, she discovers a city of romance and memory. The birthplace of Hafiz, revered in all of Iran as poet and prophet, its parks are filled with lovers holding hands, safe in this haven from the reach of the Basij. Pryce has fallen in love with the kindness and deep openness of the Iranian people. She is also reminded that it is easier for her to adore this country precisely because she can leave it.

In a land where families picnicking on medians are interspersed with unmarked vans carrying the morality police, Pryce shows true grit. Not just in exploring a strange and maligned foreign country, but in facing an ingrained fear of the “other”. The message from her experience is clear: we are more alike than different. Though governments, policies, and violent leadership may separate us, we are all craving a connection that goes far beyond the borders of our countries. Available on Amazon HERE and for more about Lois Pryce