There are some things overlanders shouldn’t leave home without: a jack, spare tire, lug wrench, and medical kit, for example. But out of all the tools you should be carrying, the shovel seems to receive the least consideration despite being one of the most used. That’s something DMOS set out to change with their line of lightweight, compact “pro shovels.” They started with the Stealth, which was designed to pack up easily into your trunk or mount to your spare tire or roof rack. Squared off with big teeth to bite through ice and a collapsed size far more compact than its competition, it quickly won awards and the loyalty of customers. Unfortunately, it was better suited to shoveling snow rather than year-round use, which is why DMOS recently unveiled the Delta shovel, their all-season model. With the popularity of the Stealth, we knew we needed to check the Delta out as soon as possible, so we borrowed a prototype and set to work. 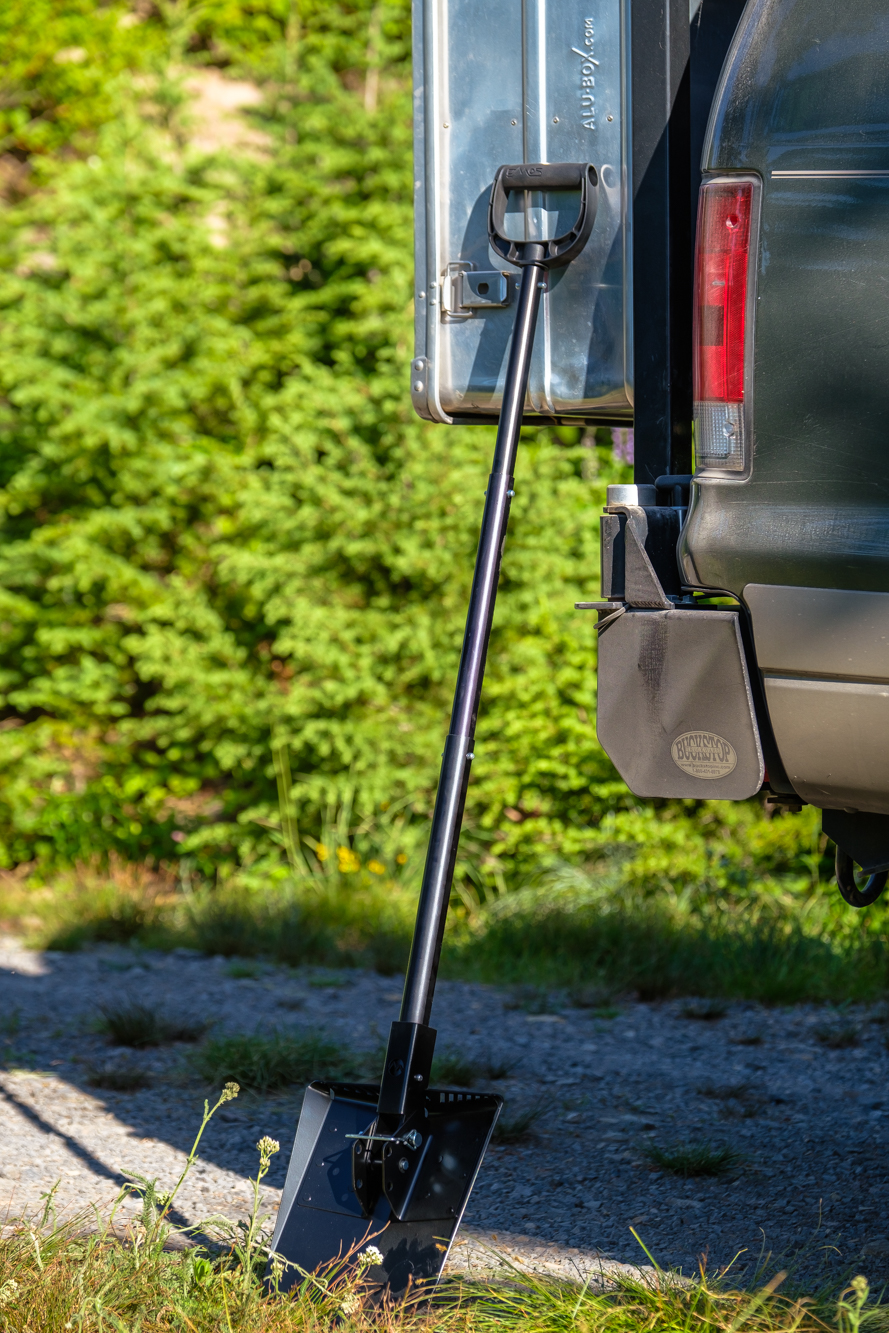 The Delta is a modern take on the venerable entrenching tool, often called an e-tool. It packs a three-position head which enables you to use it as a shovel or a hoe while still collapsing down to just 11 x 24 x 3 inches. The three-part aluminum shaft extends out to 51 inches for big jobs or collapses to give you maneuverability in tight spaces, say for example, under a stuck vehicle. The indexed locking shaft is made from anodized aluminum, the handle is nylon Zytel, and the blade can be purchased in either 6061 aircraft-grade aluminum, or 12-gauge cold rolled steel for the same price. (Aluminum for weight savings and steel for pure strength). When equipped with the aluminum head, the total weight comes in at just 3.5 pounds, while the steel variant clocks in at 6.3 pounds. The head is wide for moving sediment but utilizes a pointed tip to help break through hard surfaces. On the backside, you’ll find a large flat step for pressing the shovel down with your boot. It will be available in the standard agate gray, with rumored releases of Rebelle Rally Blue and Racing Orange later in the kickstarter campgain. Each shovel can be paired with a purpose-built bag or hard mount which is designed to be installed on your roof rack or spare tire. The Delta is made in Oregon and utilizes materials sourced right here in the USA. 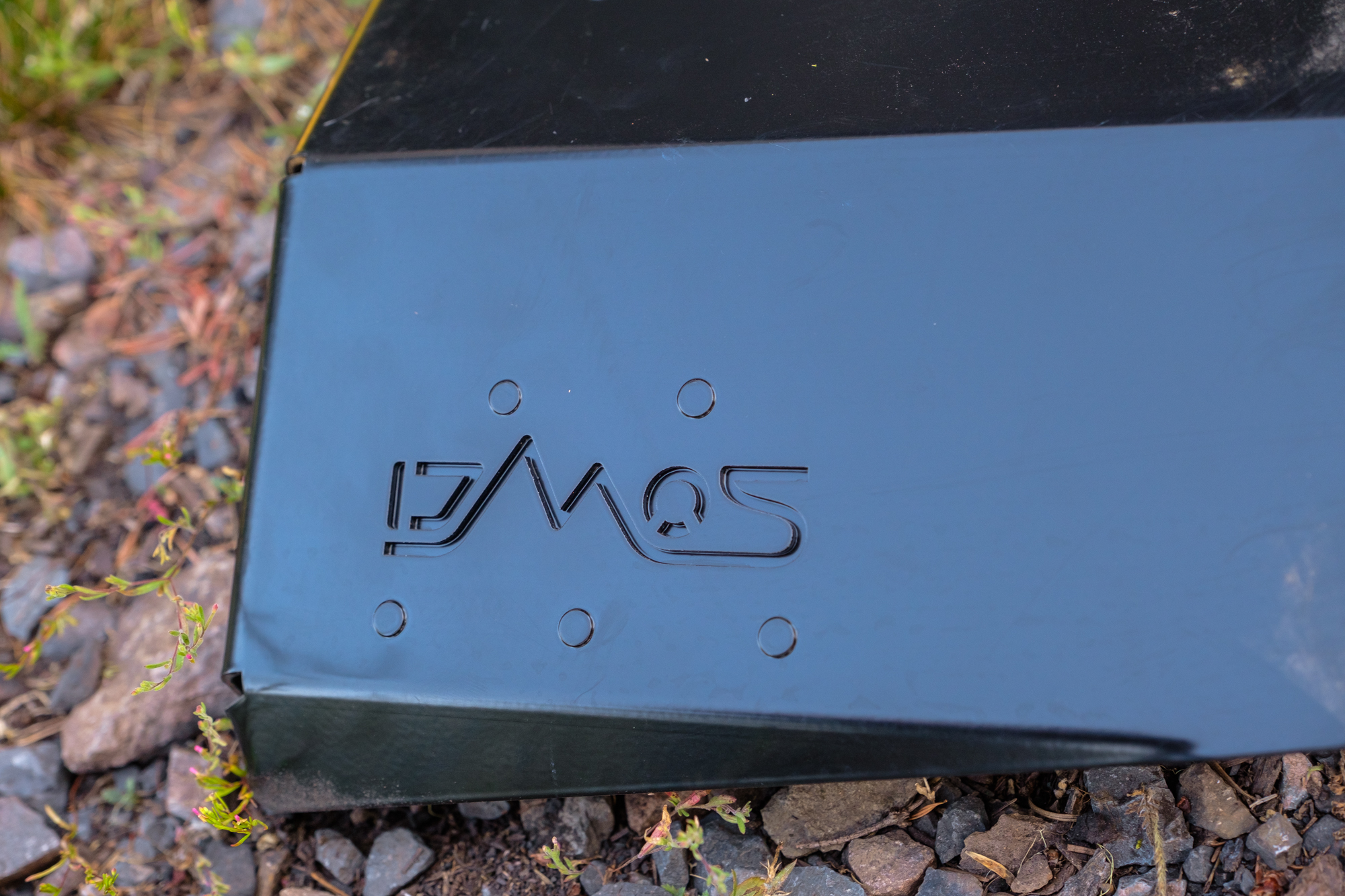 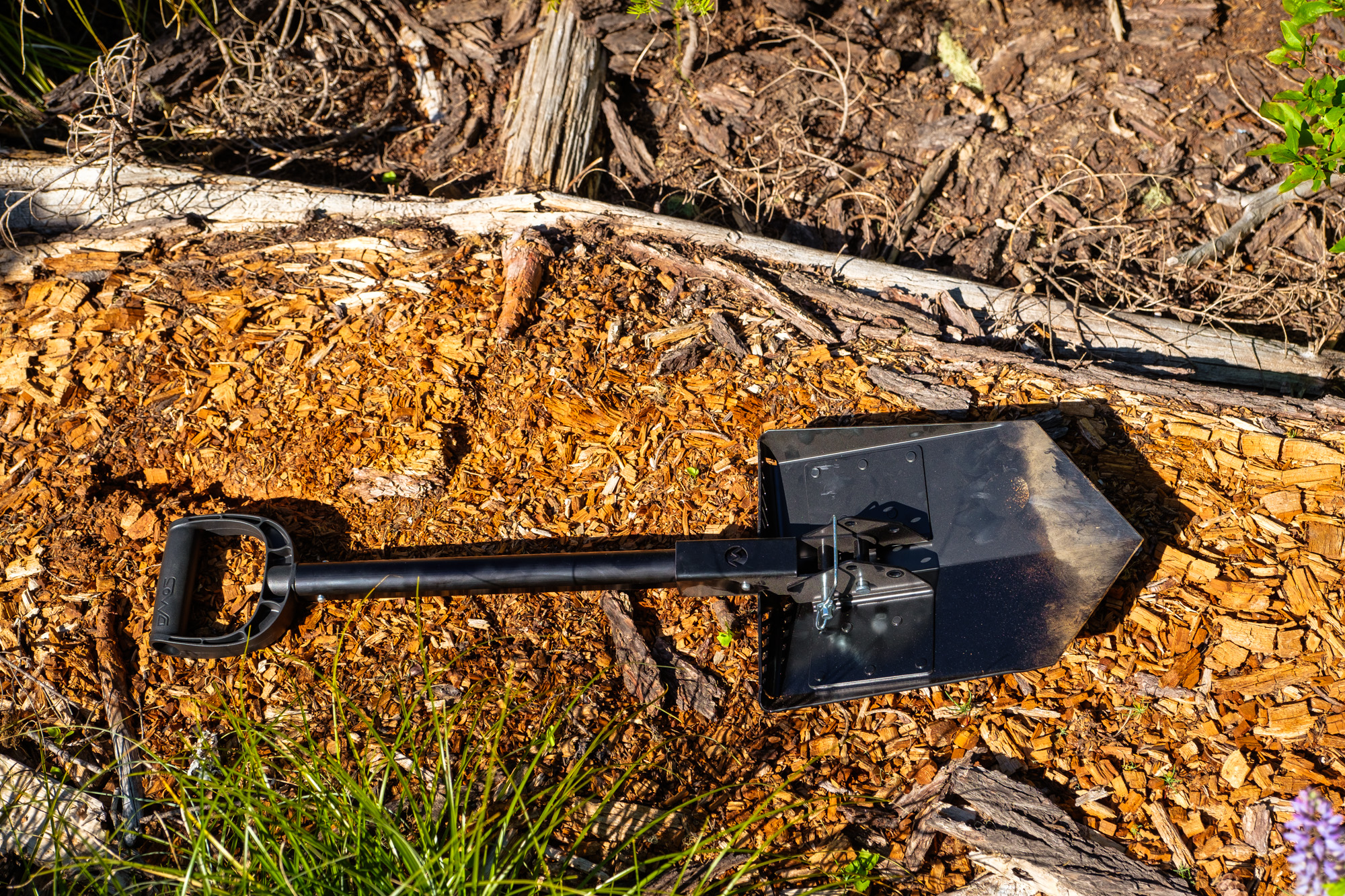 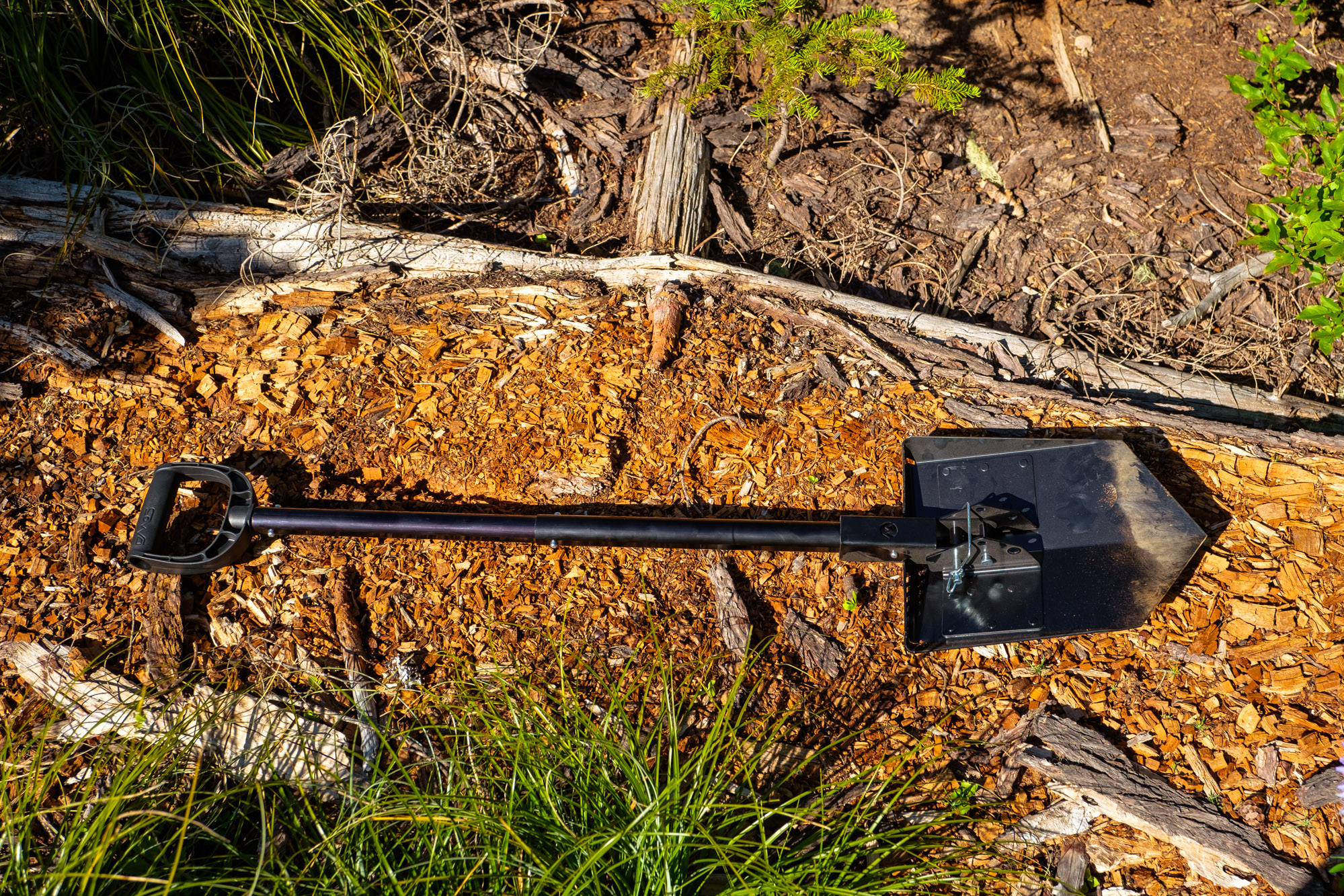 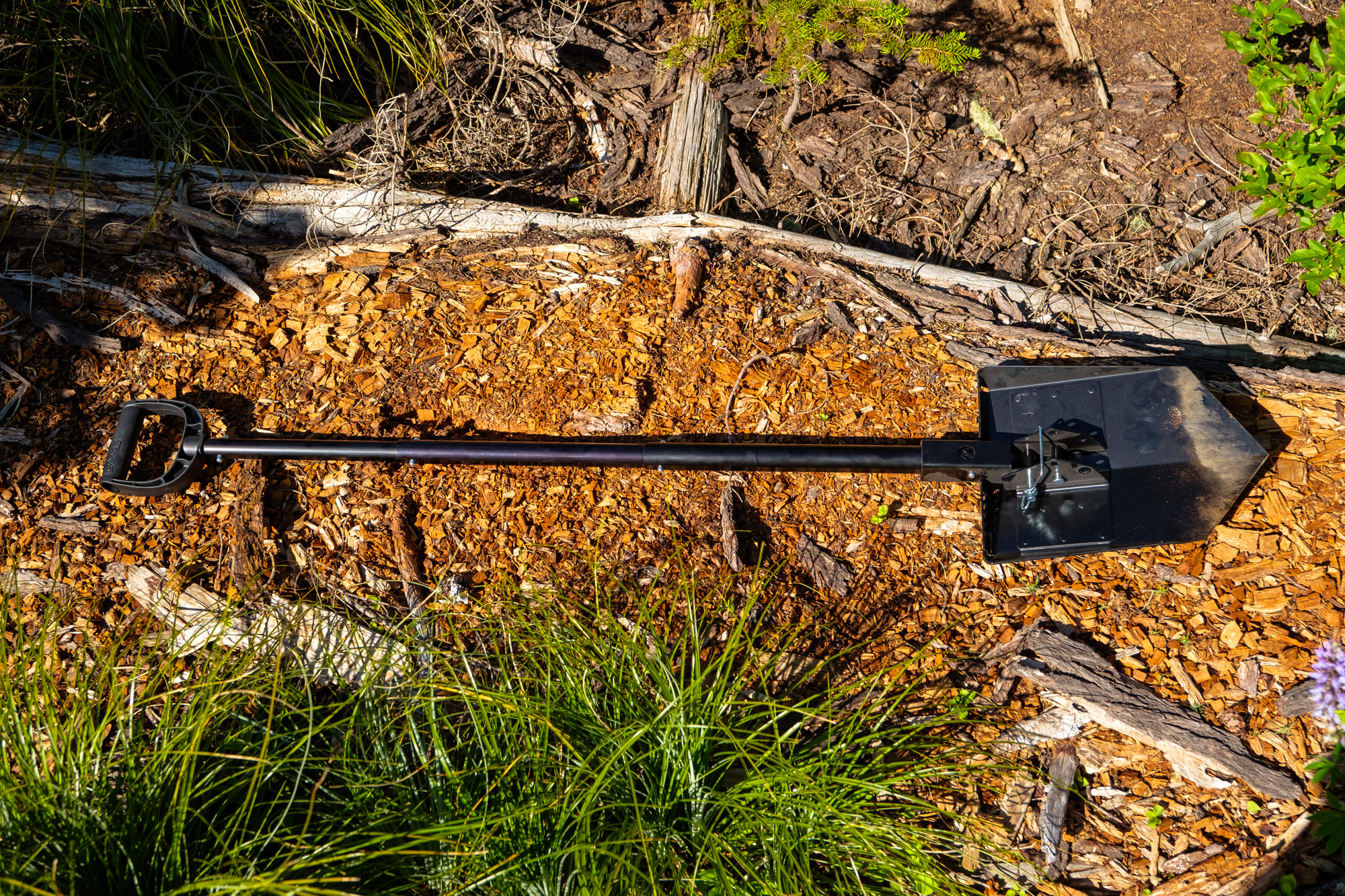 DMOS sent out prototype shovels to people who they knew would evaluate them thoroughly. The point was to find out how they could improve the product for real-world use, and improve it they have. The production variant will have several changes from the shovel you see tested here. For starters, the Delta will be using a T-handle instead of the D-handle shown here. They have also changed the Clevis pin out for a set of detent pins similar to what you see on the rest of the shovel’s collapsible handle. DMOS tightened the connector and added bronze bushings for operation with fewer rattles. Six larger rivets were also added to each side of the connector, and the head was changed from black to agate gray. There will also be an Elite version which features anodized black 6061 aluminum construction with a milled aluminum grip. With so many alterations, you can probably guess why we decided to skip the full review in favor of a first look but rest assured, an in-depth look will be published when the production version arrives. 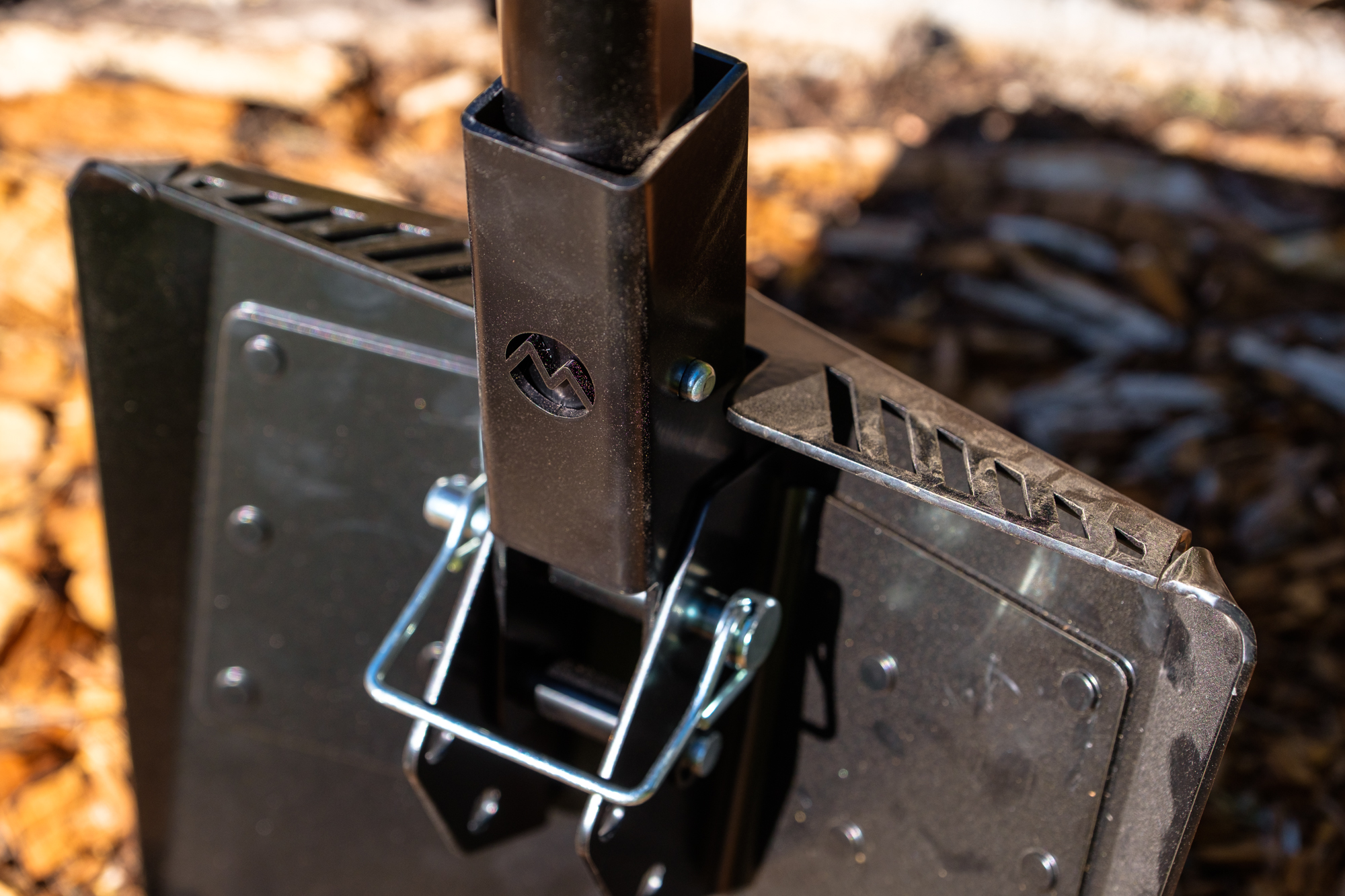 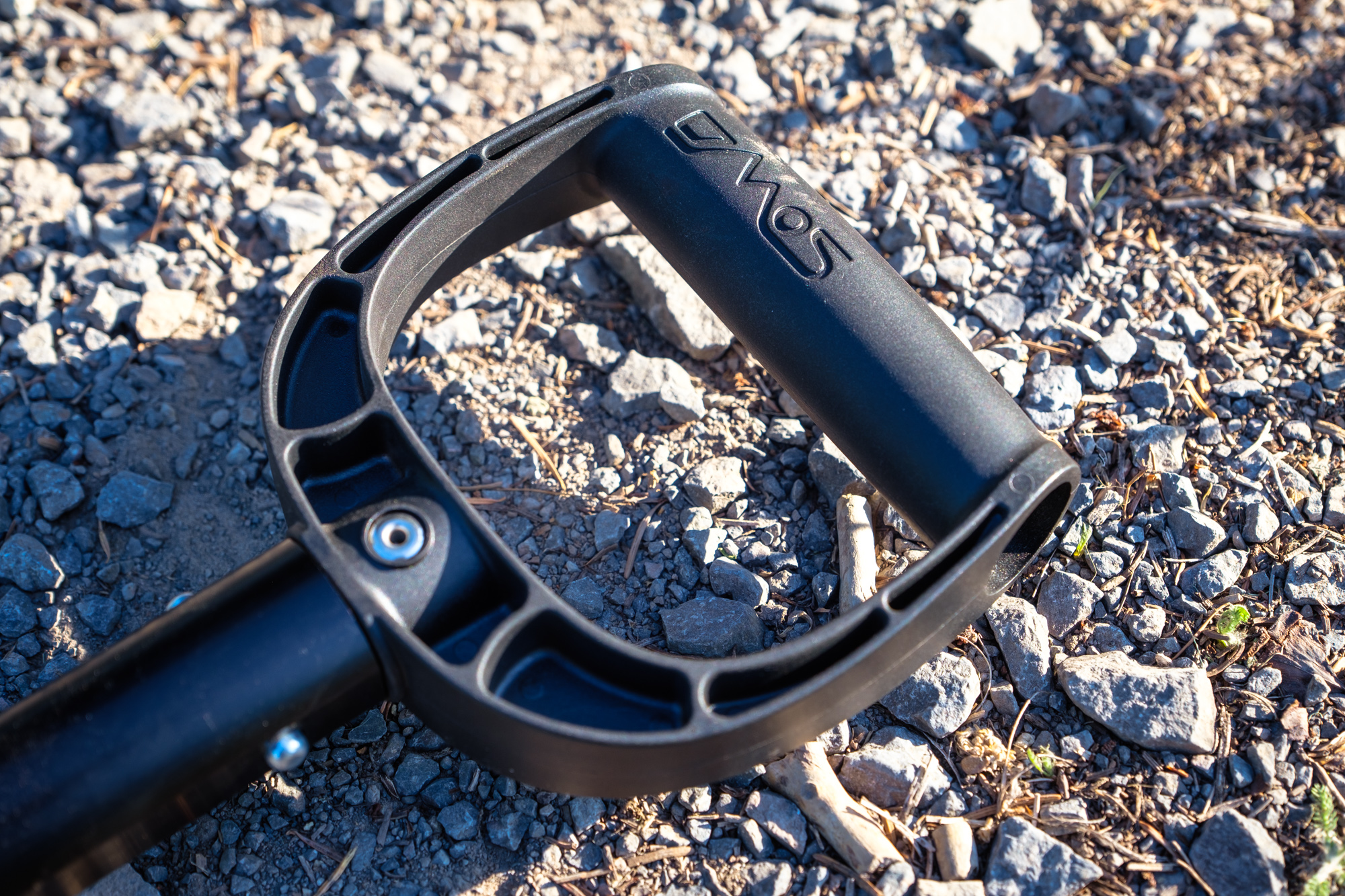 What makes the Delta cool isn’t that it is best at any one task. In fact, I’d say it probably won’t be the best in most categories. There are lighter shovels and smaller shovels which are easier to transport. There are also stronger one-piece welded shovels and hoes that are better for digging on a large scale or excavating tons of earth. But the Delta’s advantage is that it isn’t specialized for a single purpose, rather it packs the versatility and function to address multiple scenarios with one lightweight and compact tool. 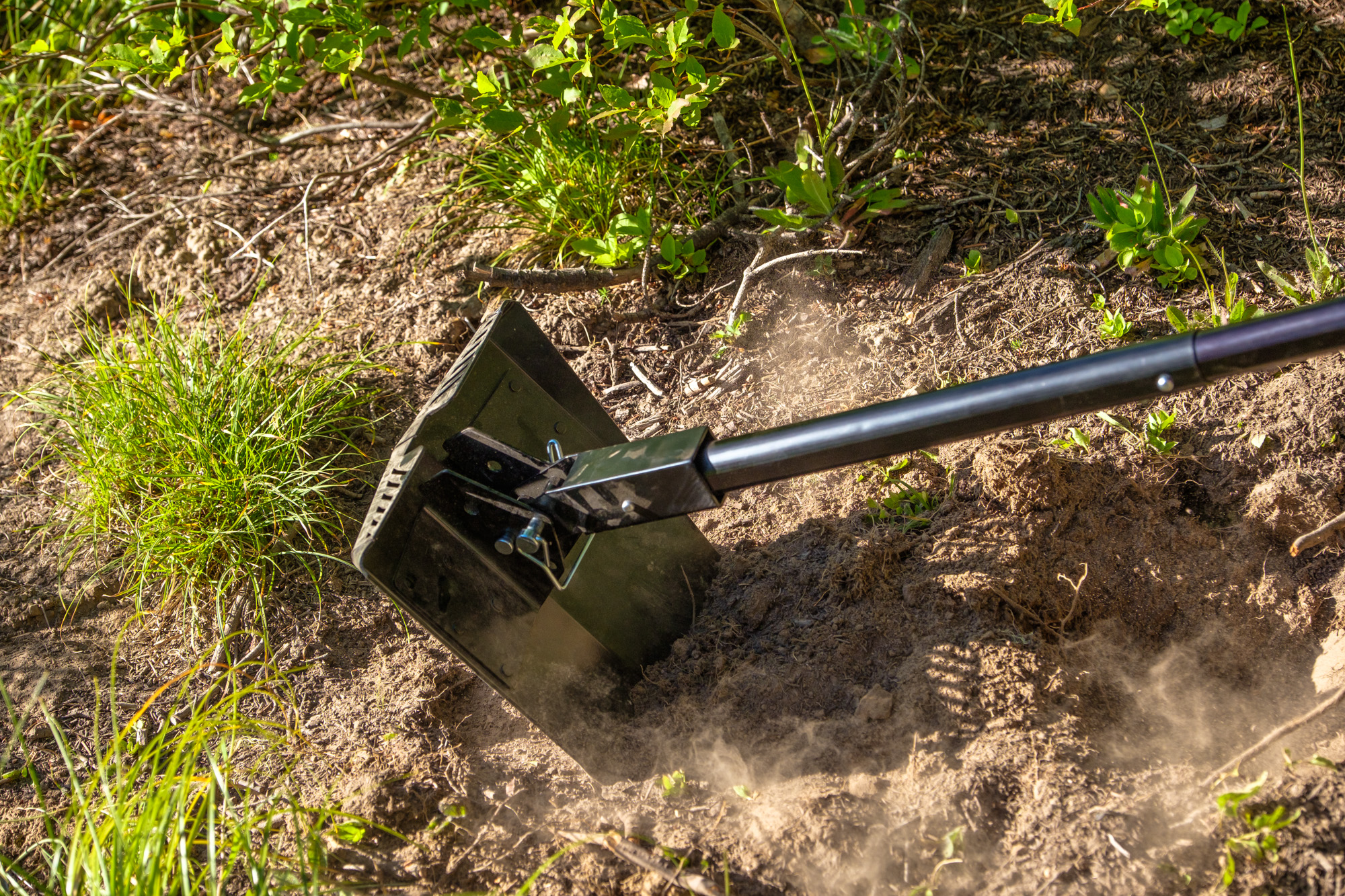 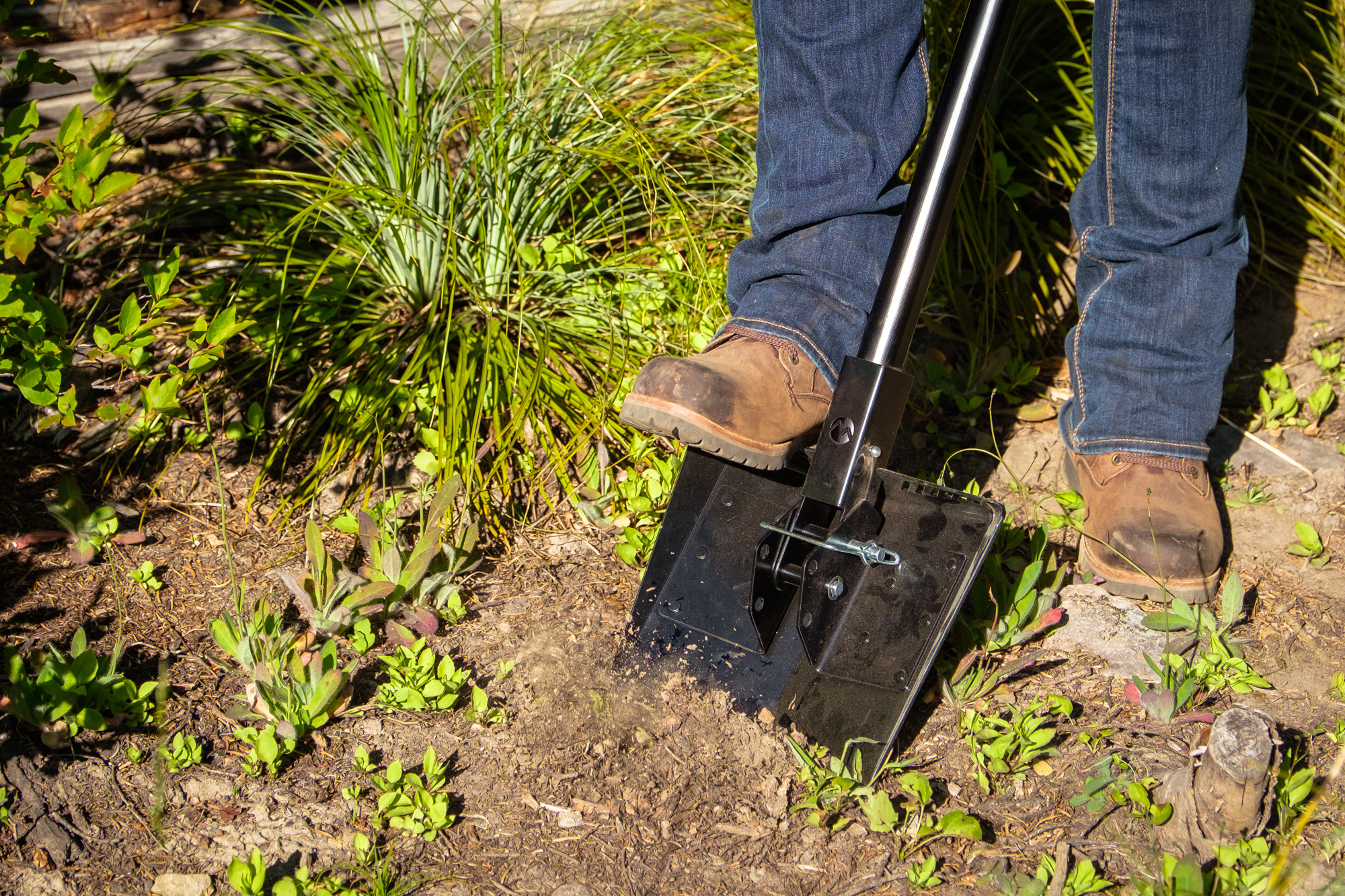 Say you’re driving through dunes and get stuck, buried nearly to the frame. You’ll need to dig out, but trying to shovel something as fluid as sand from the confines of a tight space beneath a vehicle can be frustrating, especially when you have to take thin layers out one by one. With the Delta, you can pop the head into the hoe position to drag out buckets of sand in short order. The short-handled setting will probably be best to start, but as you reach further beneath the vehicle, the handle can be extended to completely clear the undercarriage without forcing you to crawl under the truck.

Alternatively, let’s say you own a Jeep, and space is limited. You need a light and compact shovel to fit inside, but you’ve also got a bad back, so you want something large enough that you don’t need to bend down to dig. Not a problem, as the Delta will collapse to fit behind your seat with ease when you don’t need it, and extend to the full 51-inch-long size when you do. That’s a pretty versatile tool, especially considering it’s lighter than most variants you’d find at a hardware store. 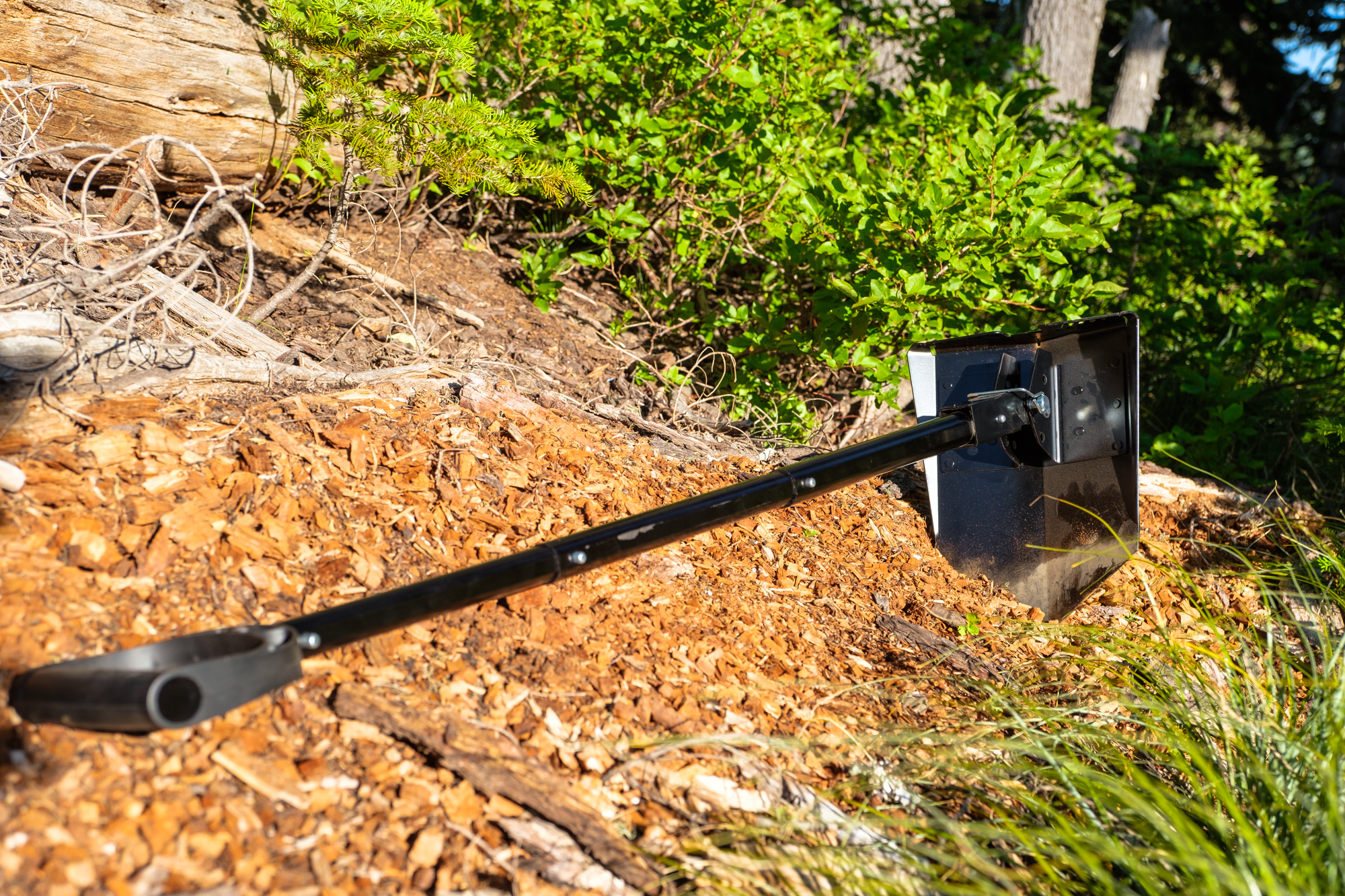 So, what’s the catch? Unfortunately, at an initial kick-starter price of $149 ($199 MSRP), $295 with the mount ($359 MSRP), or $249 for the Elite ($299 MSRP) the DMOS Delta is not cheap—not even close. While it certainly incorporates some features and functions that other competitors lack, it will need to be a seriously phenomenal product to justify that price. Time will tell; look for the full review of the DMOS Delta shovel in the coming months.

To learn more about the Delta shovel, or check out the Kickstarter pricing which lasts 21 days, visit the site here. 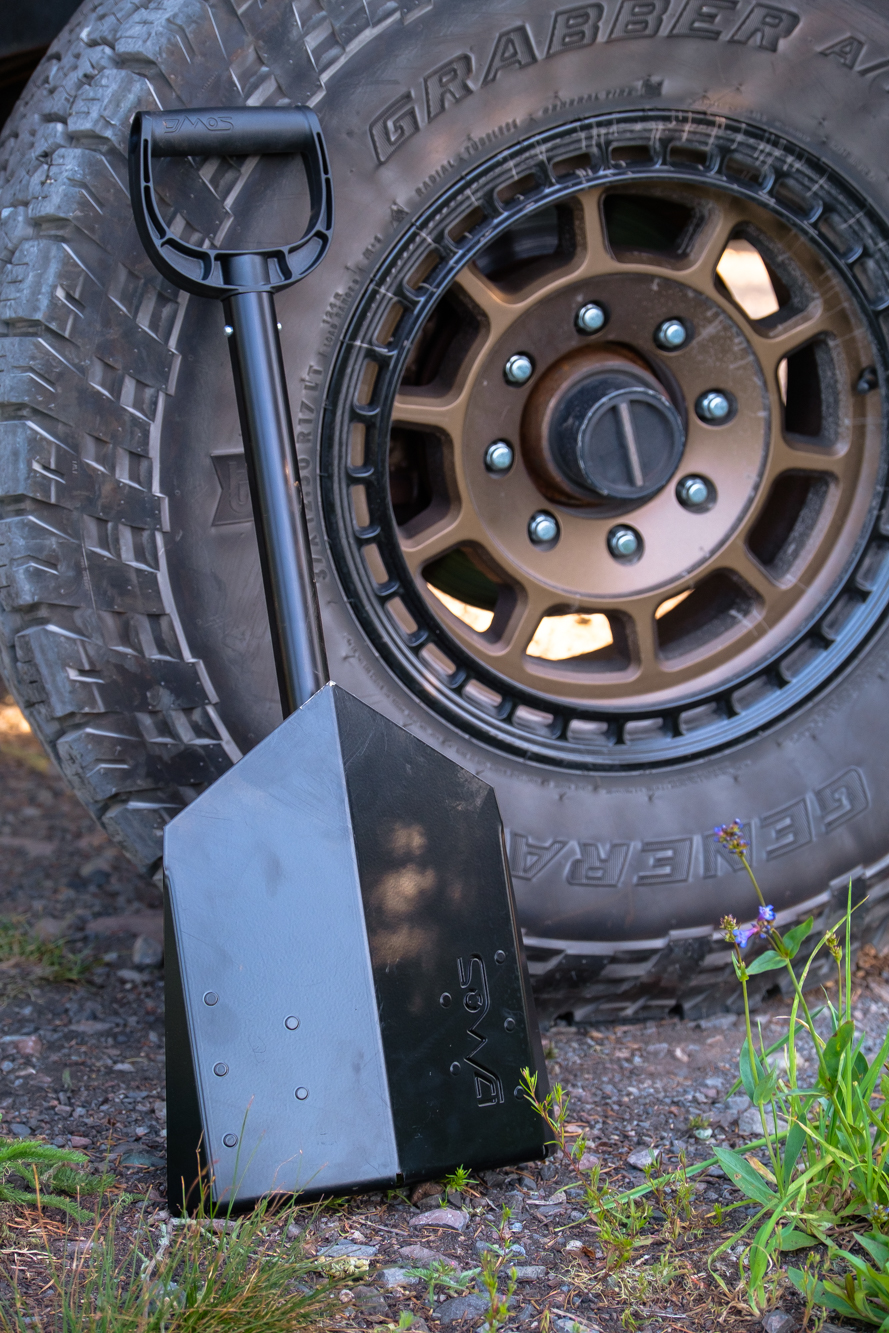