One of the challenges involved with packing a motorcycle is making things accessible, while still being secure. Accessibility is what made me look for extra luggage, specifically tank panniers. My tank bag is typically full of camera gear, so I needed somewhere else to store things like a first aid kit, and a tire gauge that I didn’t want buried in the saddle bags. A friend of mine lives down the street from Wolfman, so for convenience reasons that was my choice (not to mention their reputation for quality). Turns out this was also a wise choice.

With a non-stretch non-skid backing, they fit almost any tank, from ATV’s to motorcycles. Each bag has two straps at the bottom, and two large straps that cross over the tank between the two bags. Cinching these two top straps can be a bit of a challenge at times, but at least how I use them I don’t often have reason to remove the bags. At 14 liters per pair they have plenty of room for junk to be stuffed inside. For example, on one side I carry a substantial trauma kit, and an air compressor, and basic tools in the other. This still leaves me enough room so I can stash any other small items I pick up on a given ride.

While the Wolfman Tank Panniers are not waterproof, they are fairly water resistant and the only time I have had water get inside is during periods of heavy rain while riding. If the bike is left in the rain while parked I have found even the heaviest of rains fail to get in. The inside of the fabric is coated with a lining that does a good job of preventing water ingress, but according to Wolfman they have not found an acceptable zipper that fits all their requirements while still being waterproof, so that is where water gets in. 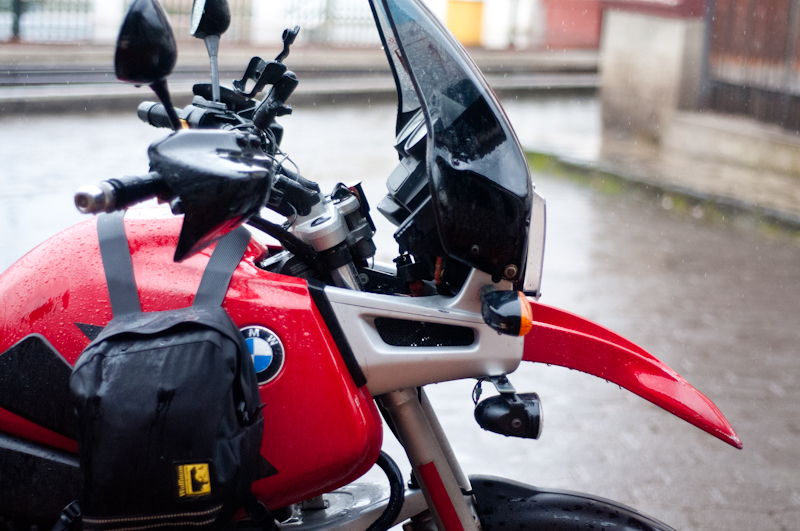 Being made of Cordura nylon they have survived multiple attempts by mother earth to tear them open. Compared to other tank panniers, they also have better stitching, as they are the only ones I have not seen fall apart on the road. The best part? At least on my 1100GS with gear as a backrest, I can put my feet up on them and lay back like a recliner. Trust me, that makes many other riders extremely jealous!