What I’ve learned over the past seven years of moto camping and long-distance riding is that you pretty much pack the same amount of gear for three days as for three months: tools, camping stuff, rain gear, off-bike clothing, first aid kit, camera, etc. As for food, you can only fit a few days’ worth at a time, anyway, so even that doesn’t change much. The bottom line is it all adds up.

But for extended road trips—and by that, I mean a few months or even years—where I see riders bulking up is in the type of gear they bring along. One simple piece of advice: buy backpacking gear. After all, what user group needs to be more ultra-light than those who carry everything on their back?

When my husband, Dave, and I set off on our round-the-world trip, we already owned a lot of lightweight gear from past mountain and ski expeditions; our rain jackets weighed a few ounces, and even our camp stove, bowls, and cups were all contained in one pot and weighed just 2 pounds. 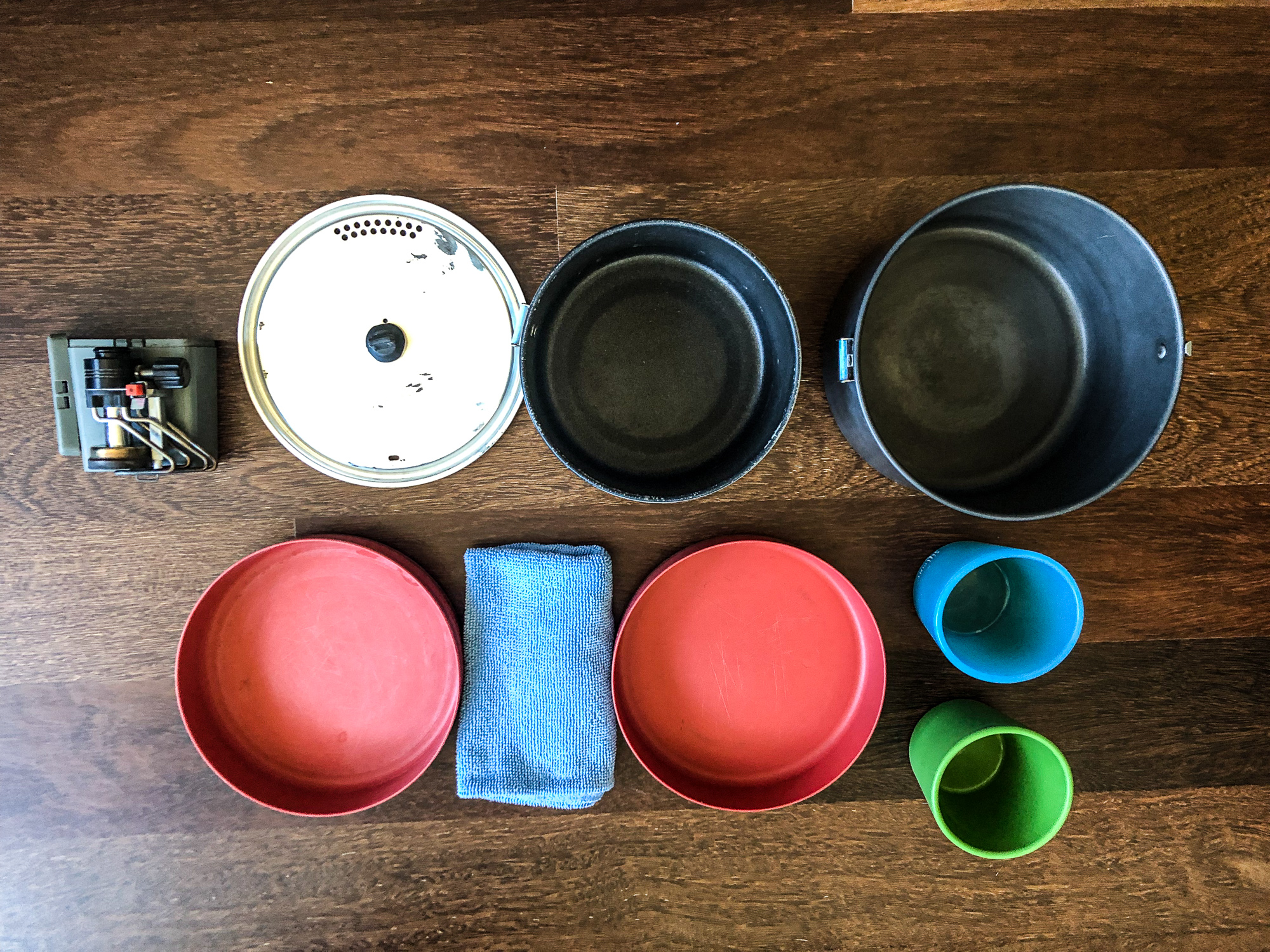 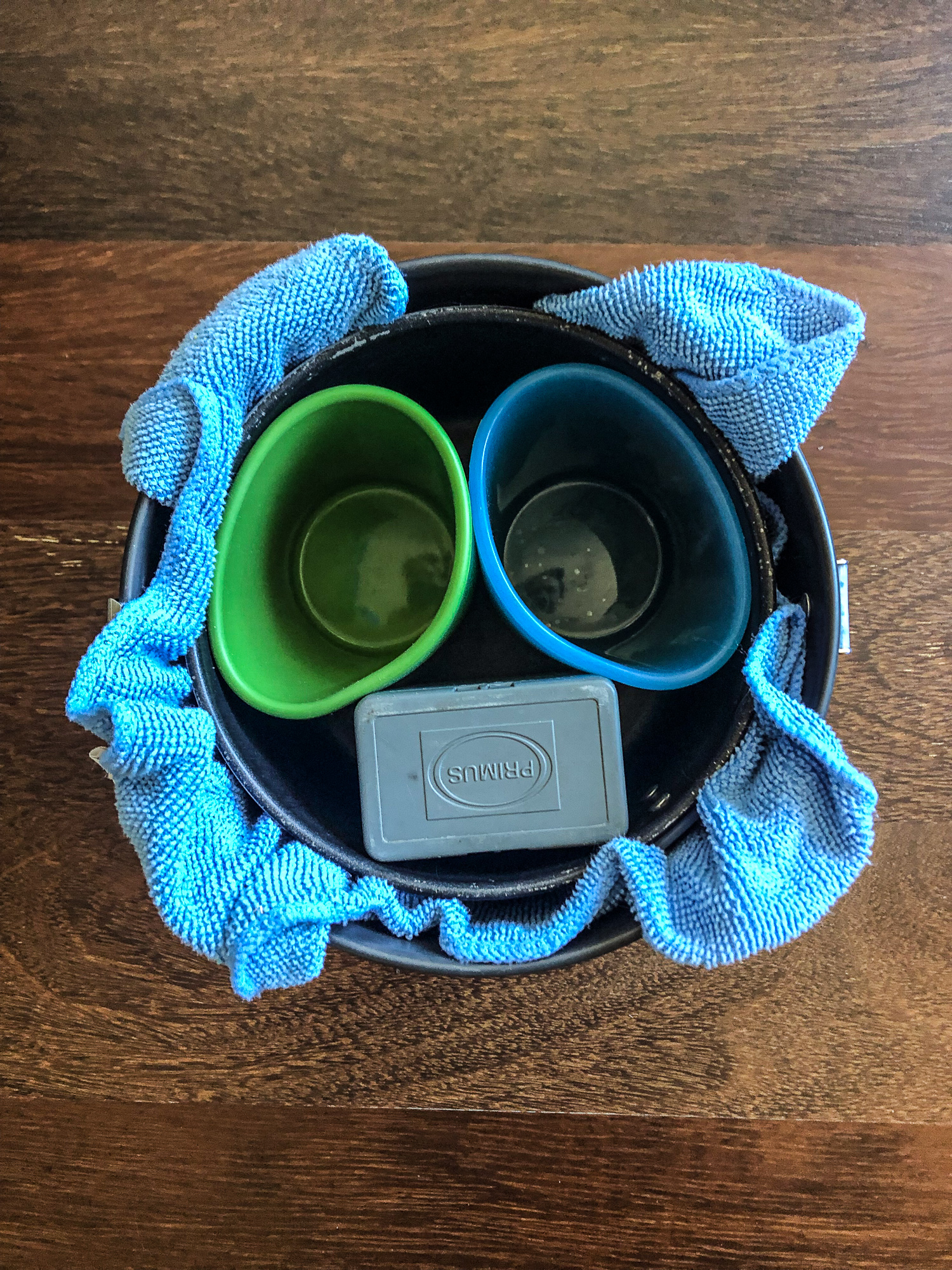 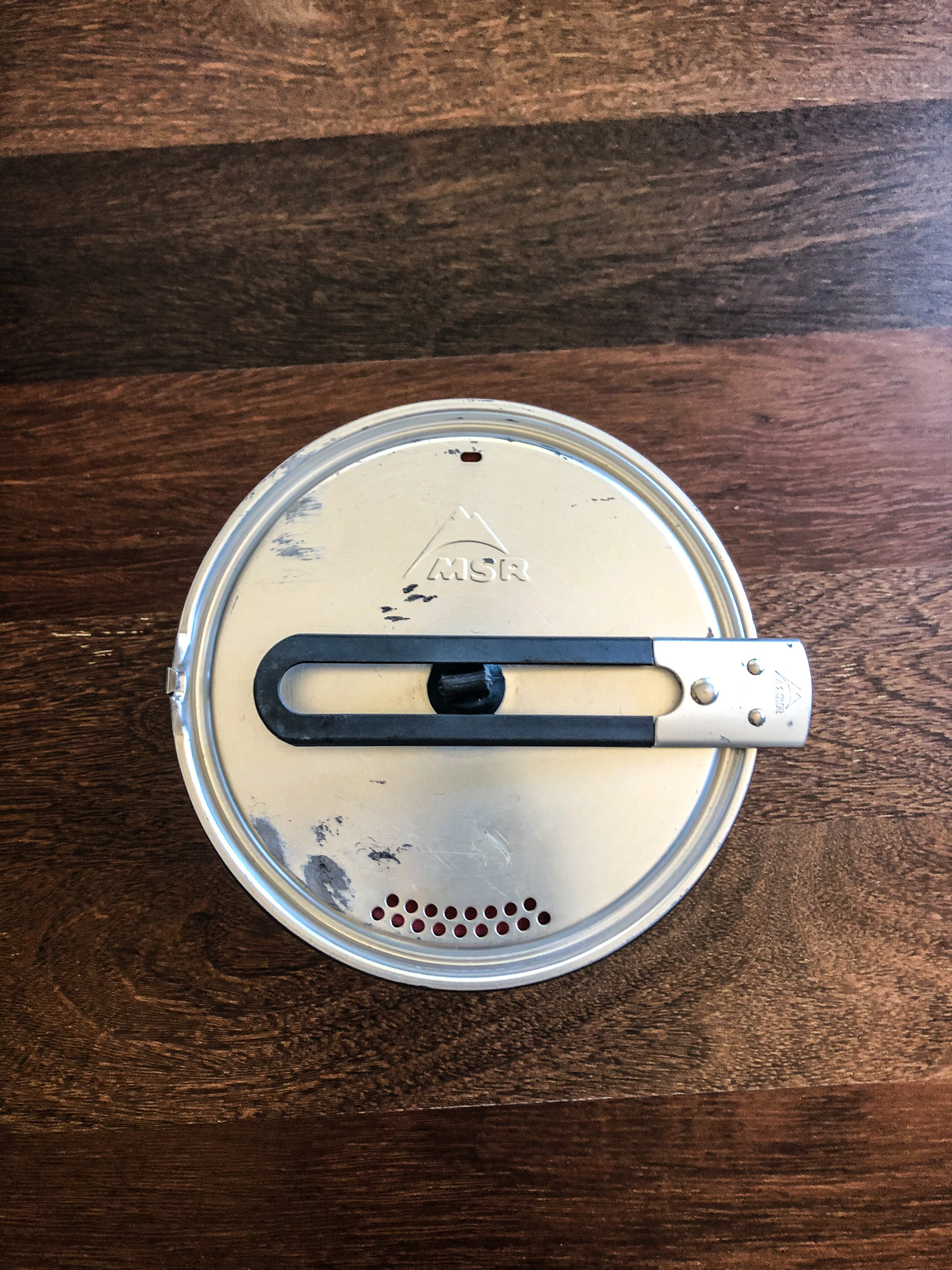 Despite meticulous planning and packing, we still ended up with almost 30 pounds of extra weight between us. 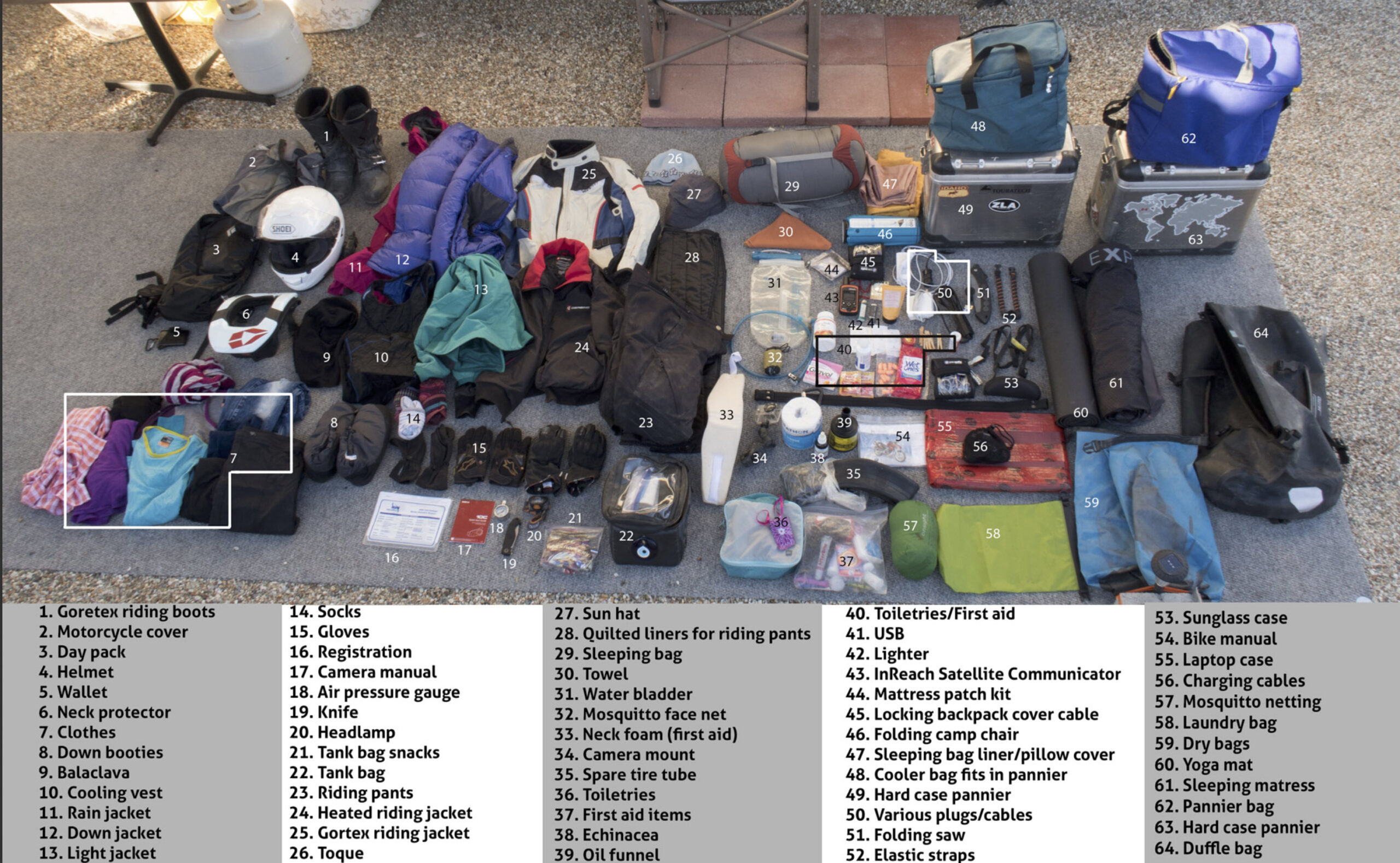 What I packed at first. 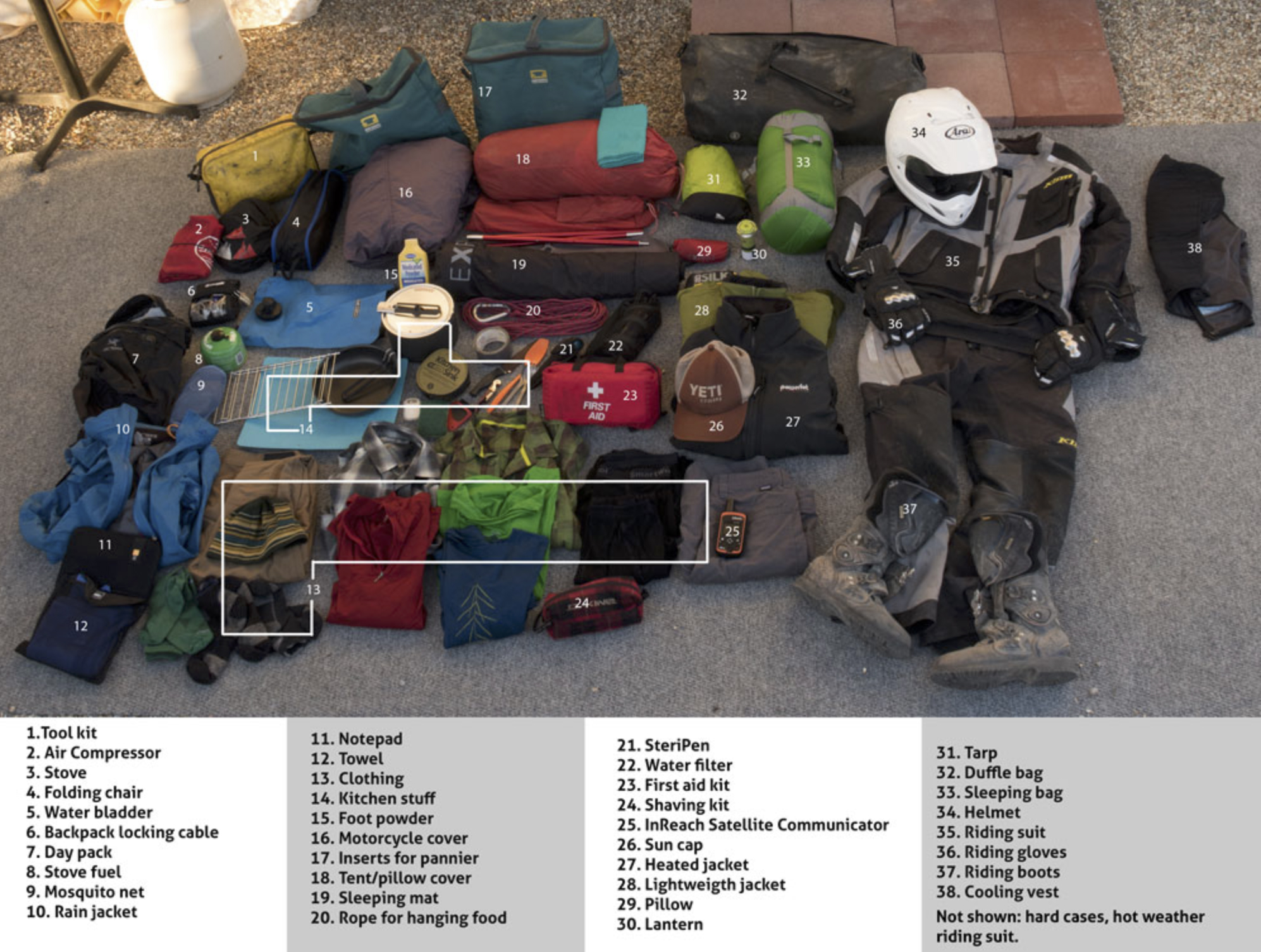 After a few weeks on the road, we sent a lot of items home. The feeling of a lighter bike was noticeable, although, for the next 20 months or so, we still rode with more than 80 pounds of gear each—more in places where we carried spare parts and tires because moto shops were few and far between. (This is where shorter trips make a difference—I’ll usually bring less tech gear and clothes only for one season.) 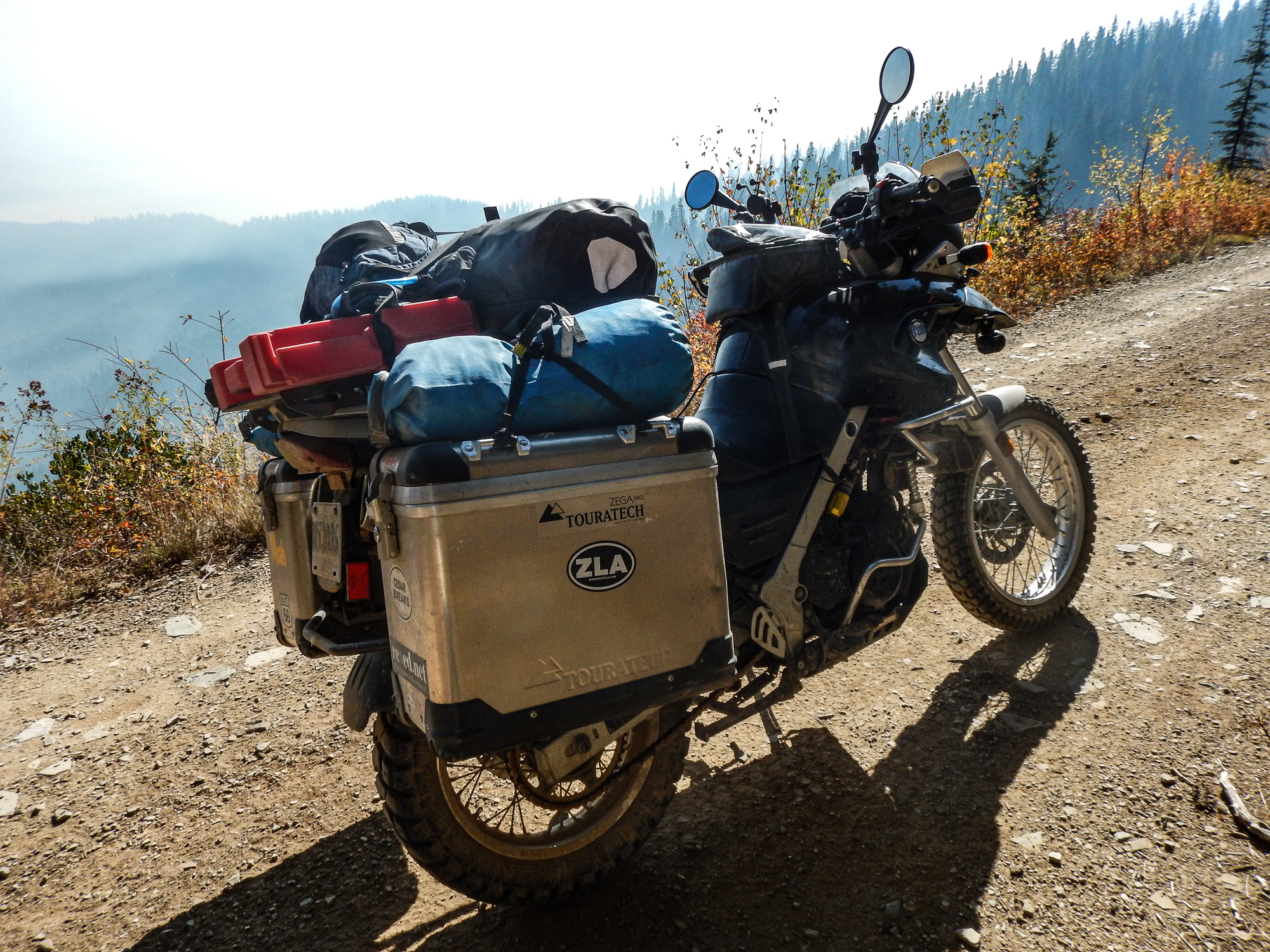 My overloaded bike the first few weeks of our trip. 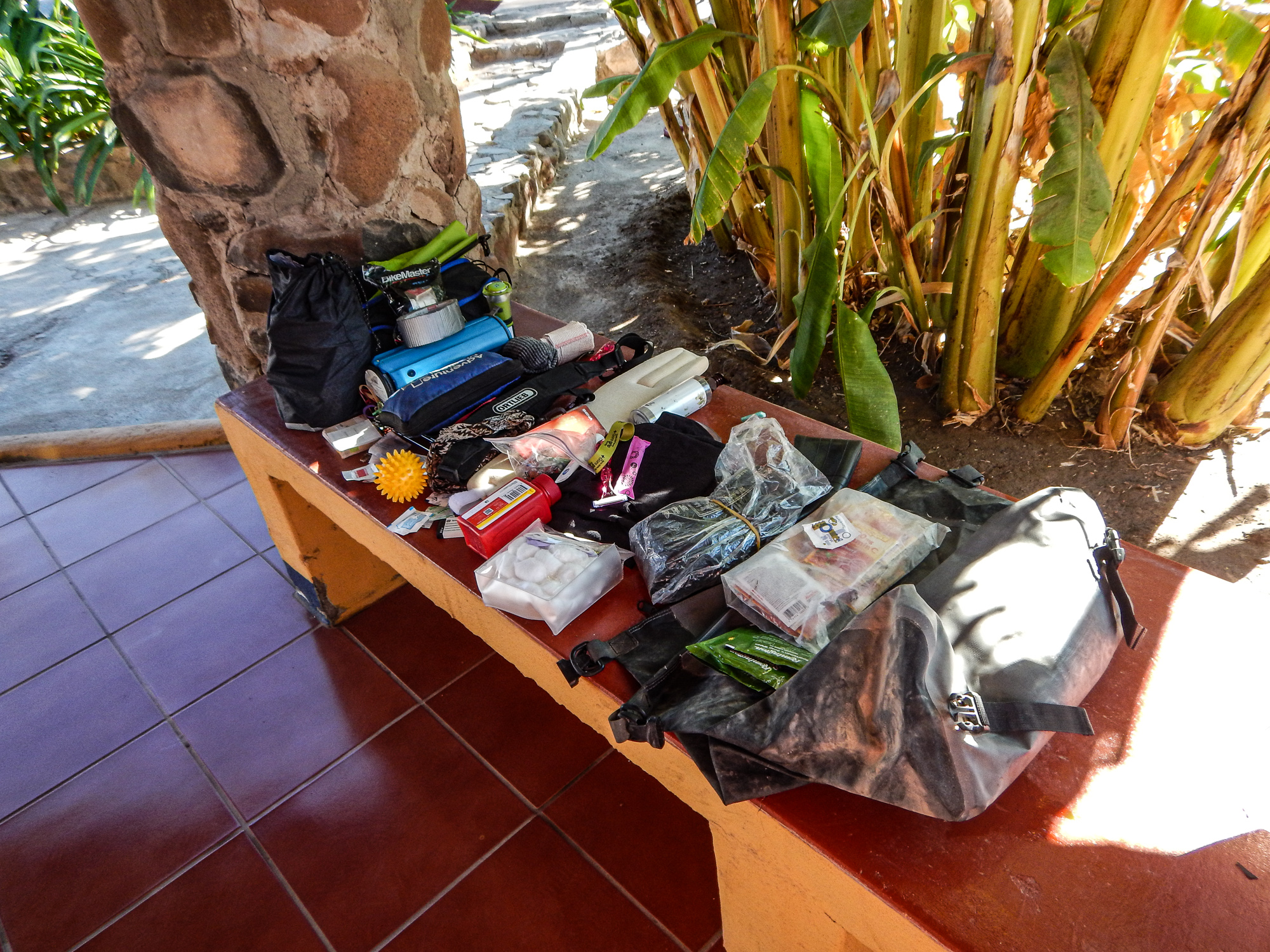 In Baja, we realized we had far too much gear and off-loaded 30 pounds between us.

Every rider has non-essential stuff they’re unwilling to part with. For me, it was my 6-pound laptop, and Dave carried about 20 extra pounds of camera gear. The truth is, to go ultra-light, you’ll be compromising either safety or pleasure, and most of us can get away with that for only so long. 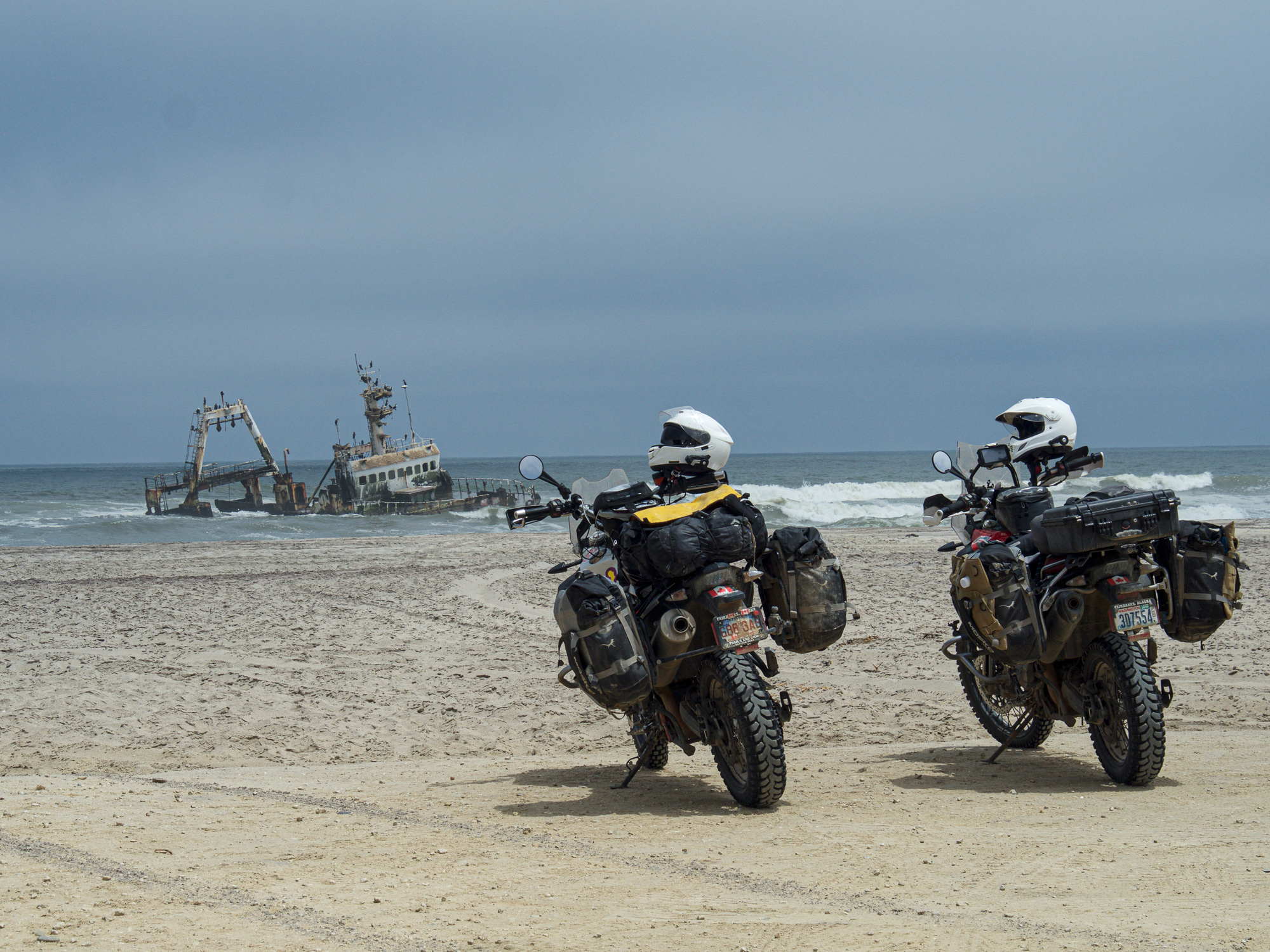 For many reasons, soft bags are the way to go. They cinch down with less stuff, so, as you’re rolling along, consuming food, you can make your bags smaller.

The lightweight traveler should always factor in bulk as well as weight. You may look at the cost of an ultra-light sleeping bag and think, “I can put $400 of gas in my bike and ride through most of Central America for that price.” The difference—and you’ll feel it after the first sandy road in Baja—is you’re getting a good-quality bag that weighs 19 ounces and packs down to the size of a football, instead of something that, although much cheaper, can weigh more than 5 pounds, and doesn’t even fit in your panniers when rolled up.

Some true diehards out there can ride for a month with a tarp and a match, but that’s not for this Girl Scout. 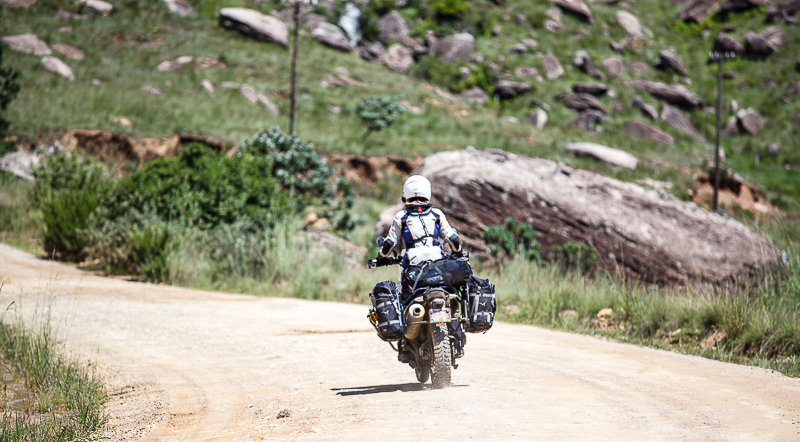 Don’t be miserable. Do be safe.

12 Tips for Packing Lighter and Smaller

Use Stuff Sacks for Everything Your tent will come in its own sack, but you can compress it much smaller inside a stuff sack. Same with your sleeping bag and even clothing. I strongly suggest something waterproof—there will be mornings when you need to shove a wet tent inside your bags, and you don’t want it to make everything else damp. Also, look for sacks with straps to cinch everything down as much as possible, and keep it down.

Spread the WeightMaybe you’ve got everything whittled down to 20 pounds, but if you lash it all down on your passenger seat, you’re top-heavy, and that makes a difference in how your bike rides. It’s more money, yes, but consider side cases and a tank bag instead, so you can get that weight lower and spread around. Also, be sure to pack heavy items, like tools and spare parts, as low as possible. Tool rolls are a great investment.

Don’t Double UpIf you’re riding with others, make a gear list, and see if you’re doubling up on things like tools or camping stoves. You may be able to delete bulk and weight by sharing communal items.

Ditch Some ComfortAt the start of our trip, we had two small camping chairs that folded up smaller than a loaf of bread. But we soon found that almost everywhere we camped had something to sit on, even if it was a rock or log. We sent them home and deleted five pounds just like that. I’m also prone to packing too many clothes, so I gave up an extra pair of jeans, some T-shirts, and socks and underwear. That meant doing laundry more often, but it was worth having smaller, lighter luggage. Besides, after some time on the road, you realize none of this matters.

Shrink Your TowelFor long-distance trips, it’s hard to go without a towel unless you spend every night in a hotel. Also, you may like swimming en route. Regular bath towels are bulky and heavy. Check out these antimicrobial camp towels for something that packs down to micro-size.

Camp KitchenHere’s another situation where you’ll lose weight heading to a backpacking store. For simple meal prep, you can’t beat a Jetboil. Sporks are a great way to combine fork and spoon, and they’re usually made from lightweight materials like plastic, bamboo, or resin. You can also ditch bringing an eating knife and just use a multitool.

Are You a Tool? Be honest with yourself; can you really fix most mechanical things that could go wrong on your bike? If not, there’s no need to bring a bunch of heavy tools you’ll never use. I would, however, recommend you at least know how to change a tire or travel with someone who does. The BeadPro is a valuable investment, and, in my husband’s words, it replaced “two tire levers and a lot of swearing.”

Buy as You Go In most places you’ll travel, you can purchase small containers of things like shampoo, skin lotion, and toothpaste, so there’s no need to stock up on Costco-sized shower gels or toothpaste. Where possible, head to the travel aisle, where you can get mini-sized basics that can be replaced along the way. It does create more waste and costs more over time, so weigh your priorities here. Consider bringing less bug repellent and sunscreen, too. For the most part, you’re riding all day and don’t need that goo all over you festering inside your riding suit. When stopped for the day, apply what you need, and that should get you sorted until the next morning when you’ll cover up with gear. I found we used far less of this stuff than we thought, and I switched to travel-sized containers.

Pillow TalkI have an inflatable pillow that packs down small like a deck of cards. I don’t love it; the pillow slides off my sleeping mat all the time and is just another thing I have to fiddle with when I’m tired and need a good night’s sleep. I recommend just using a stuff sack and filling it with your down jacket, which makes it nice and cushy, or use other clothing to make it as high or shallow as you want.

It’s a Cinch I mentioned earlier that I like to run with soft bags so they can be compressed. The same is true for a duffel bag I carry on the passenger seat, which is pliable. I used RokStraps to cinch it all down and keep it there. Try to pry yourself away from bungee cords. I see them lying all over the road; they never stay attached, and you can’t adjust them well for varying-height loads.

Bring Dual-purpose GearSporks were mentioned above. If you’re willing, you can use something versatile like a heated jacket for staying warm. (My heated jacket is butt-ugly, as is the liner in my riding jacket, so I pack an extra puffy jacket that packs small.) You can also minimize camera gear by buying a good phone, though if excellent photography is your priority, a phone may not cut it.

Bear SafetyI laugh every time I see the bear vault I carried in my pannier while riding in Alaska. It’s huge and bulbous, but it was all we knew at the time for something that kept our food contained and away from animals. Bear sacks are a much better solution and fold away when not needed.

Anything I missed? Let me know your lightweight moto travel hacks in the comments below!