With Father’s Day approaching, I’m reminded of the one and only long-day ride my dad and I did together in 2014. I was on a BMW G 650 GS while Dad rode a Harley Davidson Classic. Neither of us cared about the oddity of being on two very different bikes. Although this late September day on the Moki Dugway was part of an extended road trip with my now-husband, Dave, and my mom, that particular afternoon it was just Dad and me. 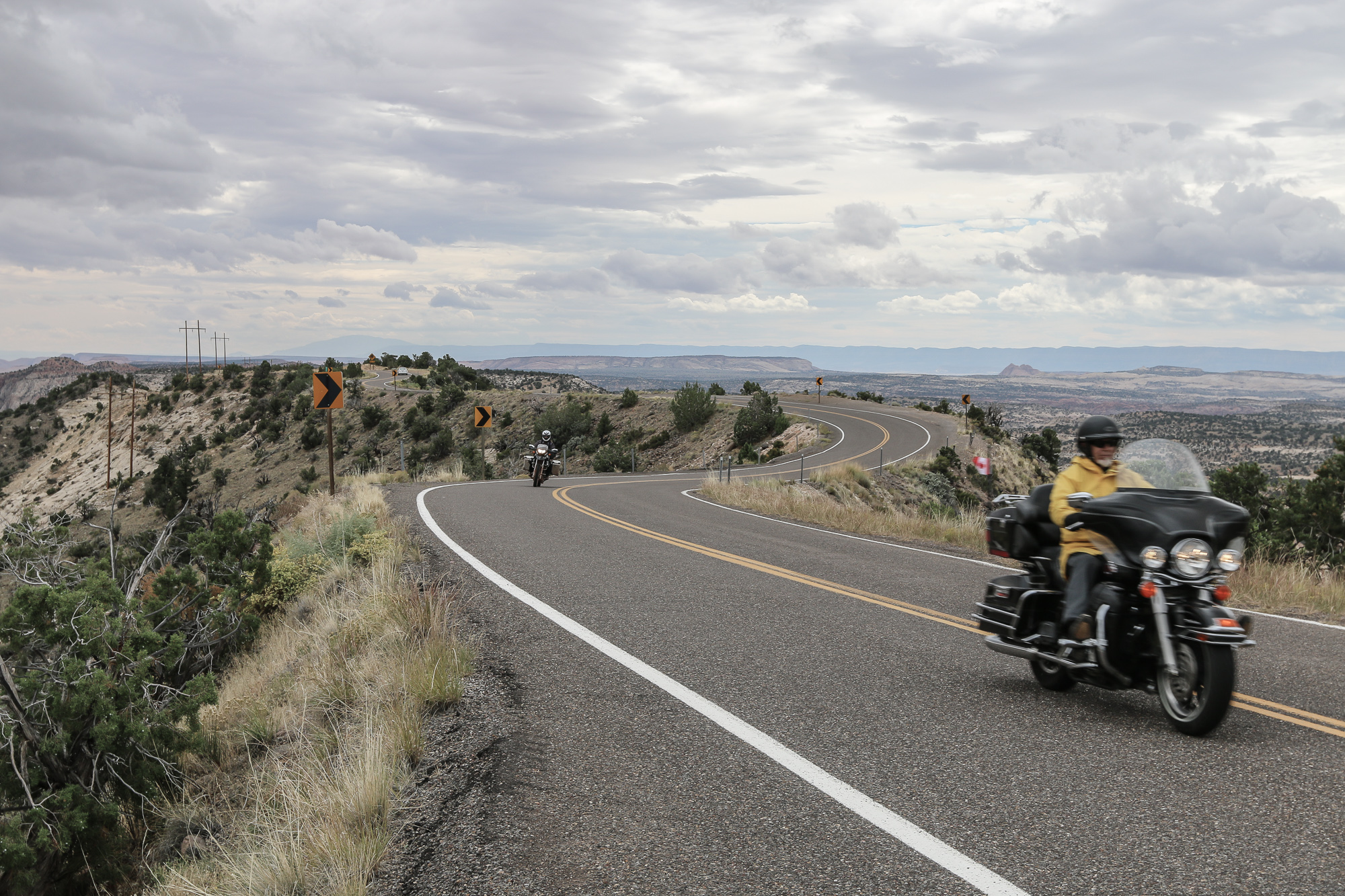 Starting at the Visitor’s Center in Utah’s Capitol Reef National Park, we rode through the beautiful ghost town of Hite. A crossing bridge took us over the Colorado River near the north end of Lake Powell. From there, we started down the Moki Dugway Scenic Backway, Dad on his 800-pound machine with touring tires, and me with a 60/40 tread on my GS. 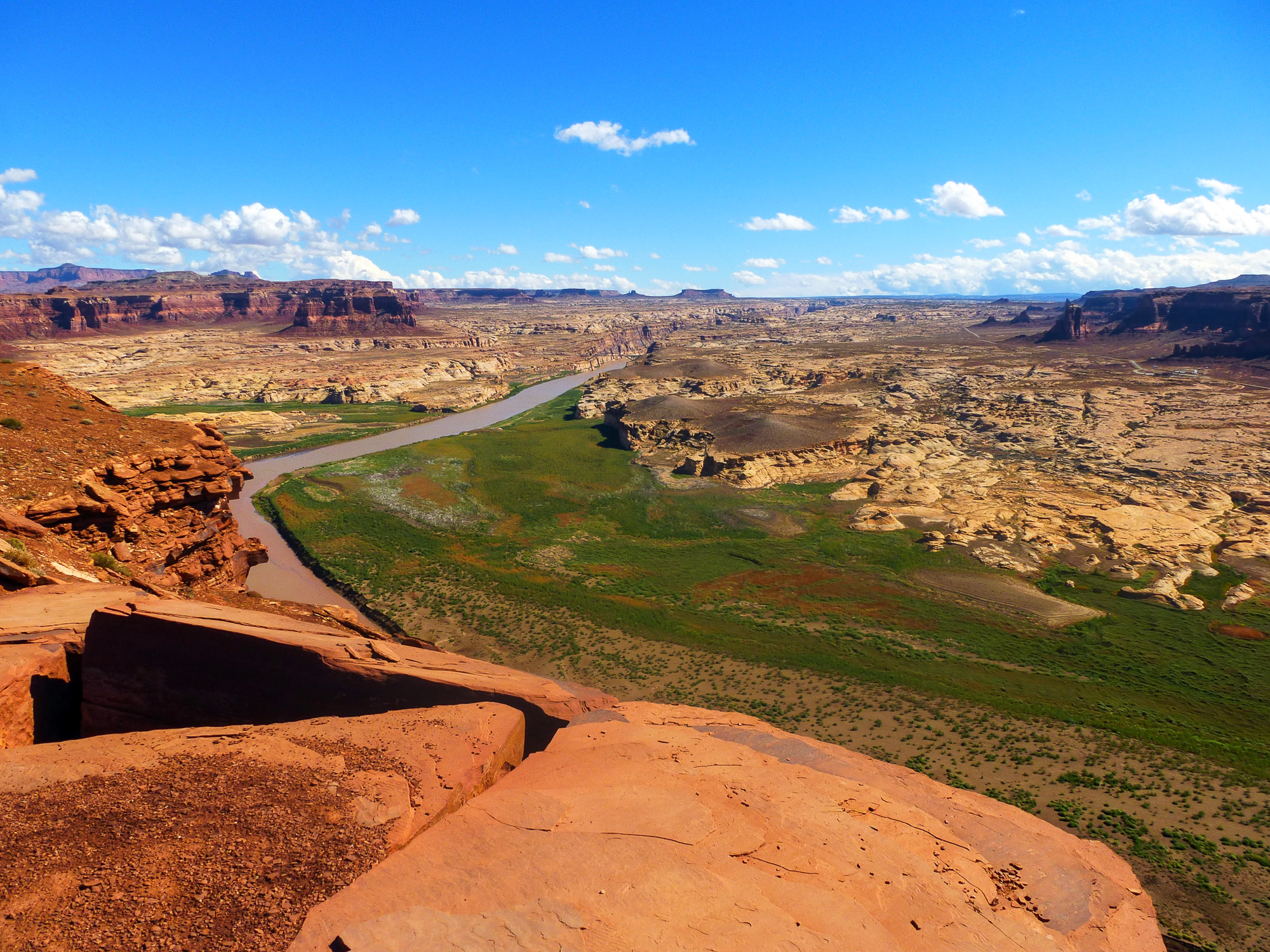 Hite, Utah, with the Colorado River below.

The Moki Dugway is a gravel highway starting at 6,425 feet and descending three steep miles to the desert floor. The road—carved into a rocky mesa rising above the Colorado Plateau—switchbacks down an 11-percent grade and drops 1,200 feet in elevation. One or two pull-outs exist for getting out cameras to capture the Navajo Tapestry—stripes of rock layers in the cliffs. On a clear day, you’ll see Valley of the Gods and even Monument Valley almost 40 miles to the southwest.

Dad didn’t spend too much time looking at the scenery, however, as he was stress-gripping the Classic’s handlebars, trying to keep from sliding off the edge where not a single guard rail guarded. Perhaps it would have been less gravity-defying had we traveled up instead of down. Too late—we were committed, and there was no turning back. Literally. No one wanted to perform a 78-point U-turn on this road. 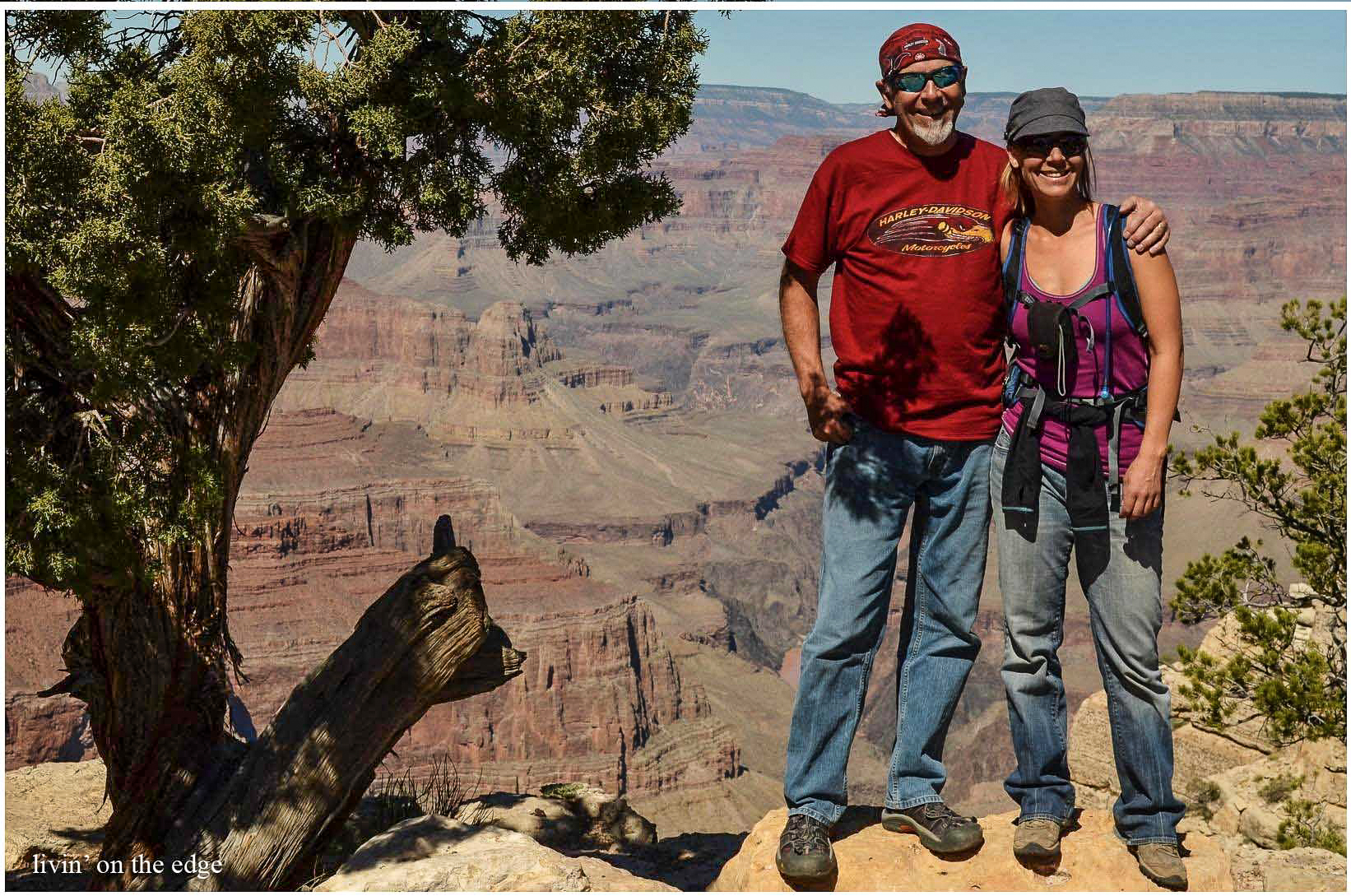 Dad and me on the rim of the Grand Canyon.

Watching his slow, concentrated descent, I pulled over to film, worried for my dad. Although some corners were paved, they were still peppered with stones dislodged from other vehicles. Dad slowed to a crawl here, handling his heavy machine with the calm grace inherited from several decades as a professional driver. I’ve never witnessed him panic behind the wheels or handlebars, but I knew this was well beyond his comfort zone. Despite this, Dad never once stabbed a toe down or wavered. He was smooth and in control.

The well-graded surface was no issue for my GS as long as I, too, stayed in control and didn’t over-throttle or brake when taking off or stopping. Standing on my pegs, I felt the bike’s center of gravity solid beneath me. Pebbles skipped off my skid plate: ping, ping, ping. I wondered if Dad was concerned about his impeccable paint job and polished chrome. He referred to our dirty-on-purpose GSs as pieces of crap—only he didn’t say “crap.” There was always a playful rift between talk of Harleys versus BMWs when Dave and I got together with my parents.

I looked out across the sand-orange desert, knowing there were no facilities anywhere near us should something unfortunate happen. No doubt anyone or anything sailing off an edge of the Moki wouldn’t fare well. Even something less drastic, like a sprained ankle or broken wrist, could turn into an epic in the blazing desert sun.

I finished filming and left to catch Dad, feeling my rear tire slide out once or twice in the corners. Should I stop him from continuing? What then? Do we leave his bike pulled over for a tow truck? In the few months I’d been dating Dave by this point, I’d gotten in over my head trying to follow him off the tarmac. I knew what Dad was going through in his mind, minus the resentment for his riding partner putting him up to this. In his route planning, I doubt Dad knew the Moki Dugway was unpaved and advised 5 mph corners. I’m not riding any gravel. Ever. I remember him saying this. 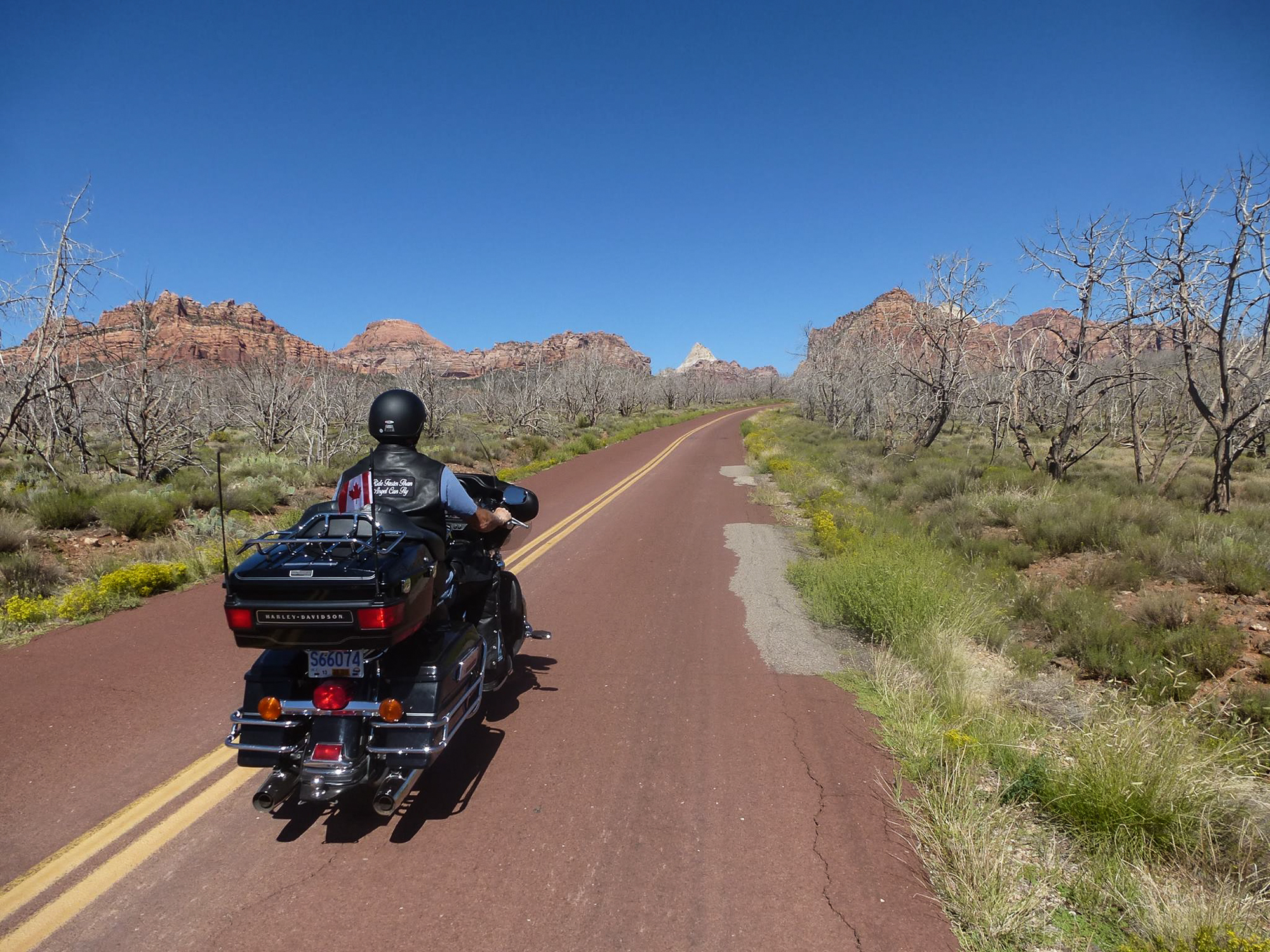 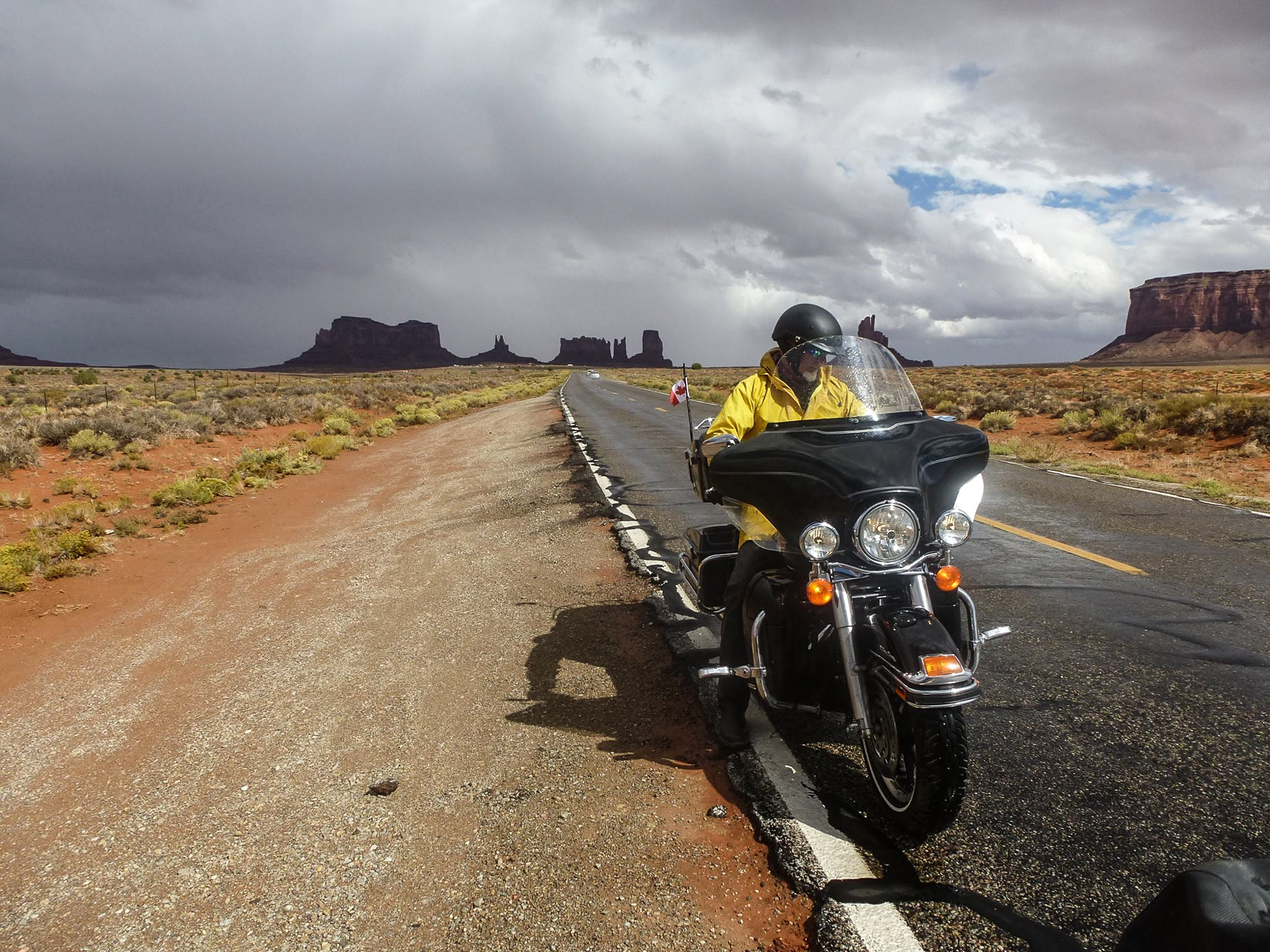 We were halfway down—just over a mile to go until we’d reach the bottom where I could see pavement stretching out several flat miles until it disappeared in a simmering mirage. I was thankful for the minimal traffic, mostly going in the opposite direction, and that the Moki wasn’t rutted or full of embedded rocks. The GS could handle such obstacles, but the Harley didn’t have much for clearance.

Finally, the dirt transitioned into tarmac. Dad pulled over and looked at me with a big grin. Was I wrong? Had he enjoyed this? I remembered the times I got angry with Dave for taking me somewhere too advanced. But when I succeeded in not dying, the thrill crawled from my toes to my head, reminding me I was more resilient than I gave myself credit for. Again, I knew exactly how Dad felt—badass.

I leaned over to high-five the heck out of him.

(Below is a one-minute film of Dad on the Moki. I’m not a filmmaker, so please forgive my lack of skill in this area of expertise.)

Seven years later, Dad is now 73. He’s traded his Harley in for a Jeep and no longer rides. Because he lives in Canada, and I’m in the U.S., I haven’t been able to see my parents in over a year and a half, which is why these memories, captured on film and in photos, were so enjoyable to revisit and to write. 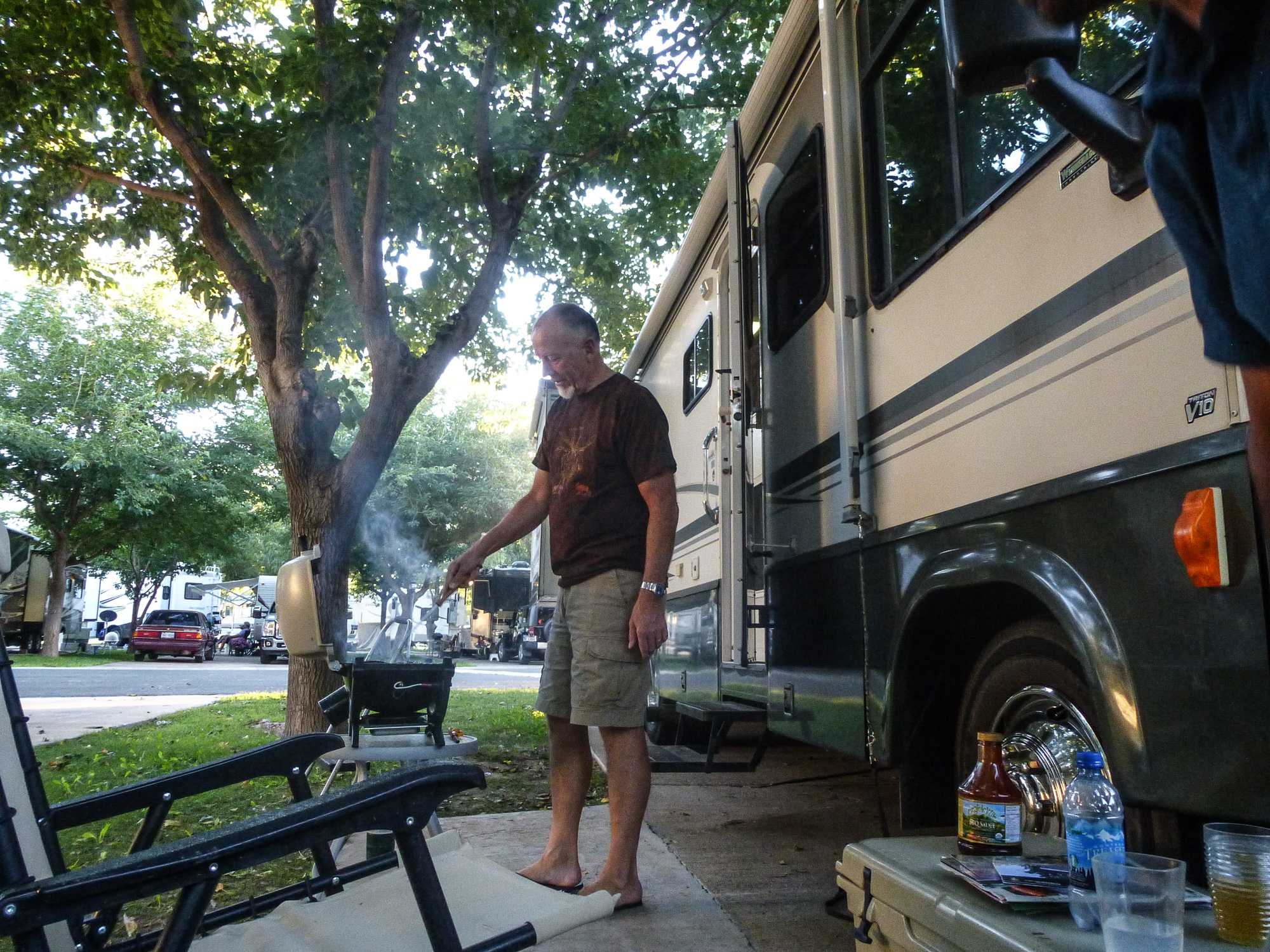 This is more within Dad’s comfort zone.

An early, Happy Father’s Day to you, Dad. 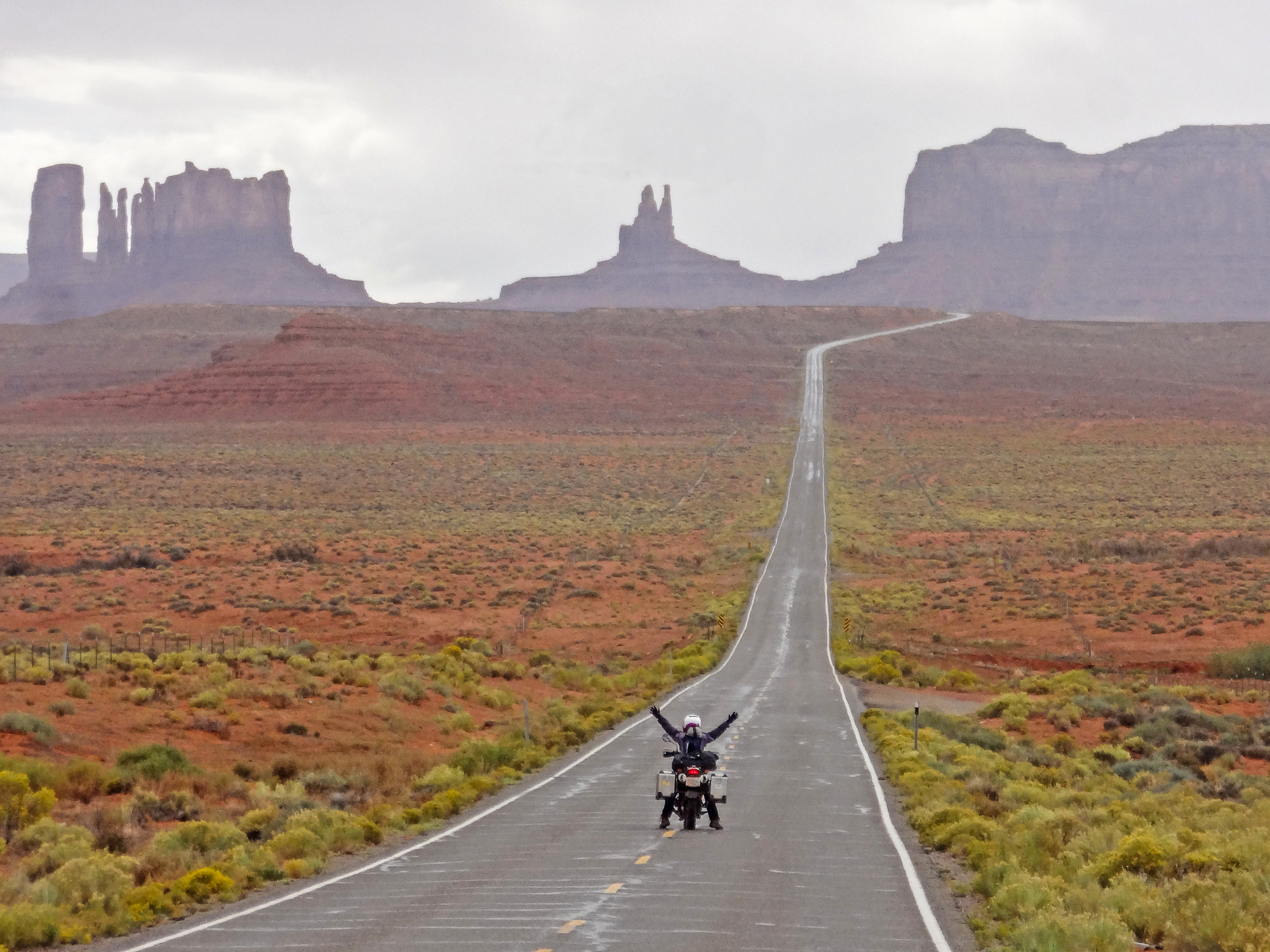 A photo Dad took of me riding into Monument Valley.