The wildlands of the Judaean desert are a far cry from the dense complexity of Ramallah.

A few years ago, I found myself on a long-disused track in the wastelands of Sudan. Over 200 kilometres from real civilisation, my team and I had left Khartoum at dawn and driven throughout the day. It was getting dark. Our small convoy had stopped. The lead vehicle had a damaged rear-right tyre and could go no further without risking mangling the wheel itself. I imagined the culprit to have been one of the sharp rocks on the bed of a wadi we had crossed earlier.

As I stood on the hard, cracked earth, I realised that never before in my life had I felt so insignificant. The night sky was vast and open, no trees or buildings or flashing lights could be seen—just a starlight-punctured void. The only sound was the low murmur of alert and professional voices.

Our vehicles were armoured Toyota Land Cruisers, an inconvenient necessity given the region we were working in. Weighing far more than my preferred option of a light 4WD for such terrain, they required a heavy-duty jack to lift. The jack in question, sensing our tiredness and suddenly confronted with the demands of its existence, decided to break. Exhausted and missing home, we strained to lift our vehicle those precious few millimetres off the track to affect a tyre change. Then, it started raining. An unseasonal downpour that stung our sunburnt skin and soaked our clothing and equipment. Out of range of any communication with the outside world, we were alone—strangers in a strange land. With every reason to be pissed off, it was remarkable to me that all I could do was smile. 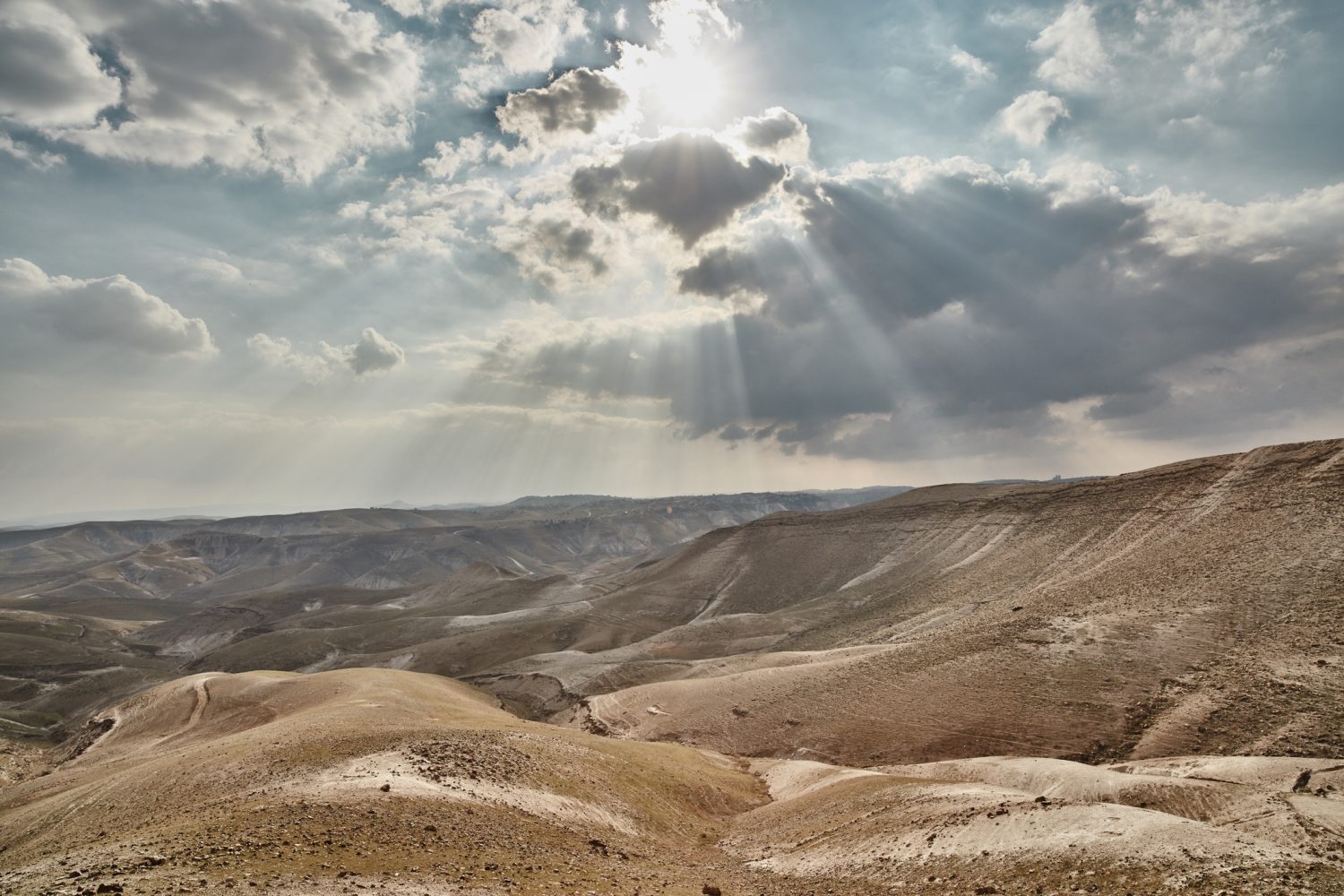 It took me a while to figure out why I smiled. I had been away from home and loved ones for around six months at that point, and was terribly homesick. So it wasn’t through the novelty of experiencing the unknown. Eventually, I realised that it was simply by existing at that moment, in a wild place.

The concept of the wild is a powerful one. It brings with it connotations of isolation, the unfamiliar, and often of danger. We all have our definition of the term, and as individuals, we might imagine anything from a barren desert to icy tundra. Though it usually involves a natural place, removed from the artificial and man-made. The wild places have been the driving theme behind stories, myths, documentaries, and many more expressions that comment on their grandeur and often desolate beauty. With temperature, weather, flora, and fauna, they have the capacity to kill or bring life. We humans are slaves to an ancient and impenetrable bond with them. The wild is part of our psyche, whether we know it or not, and it has long been recognised that exposure to nature is beneficial to our body and mind. It makes us smile.

As a species, we have evolved to intuitively understand how our lives are linked to the natural world. Our evolution supports an affinity with agrestal things, or, more specifically, things that enhance our chances of survival. For example, most of us have an aversion to snakes and spiders, perceived in our lizard brains as ancient hazards, but less so to the arguably greater threat of firearms. We are drawn to green spaces and water sources because they bring life. But it’s more than that. Environmental psychologists would argue that exposure to natural surroundings has an unconscious restorative effect on the mind, whilst dispel- ling negative thoughts. 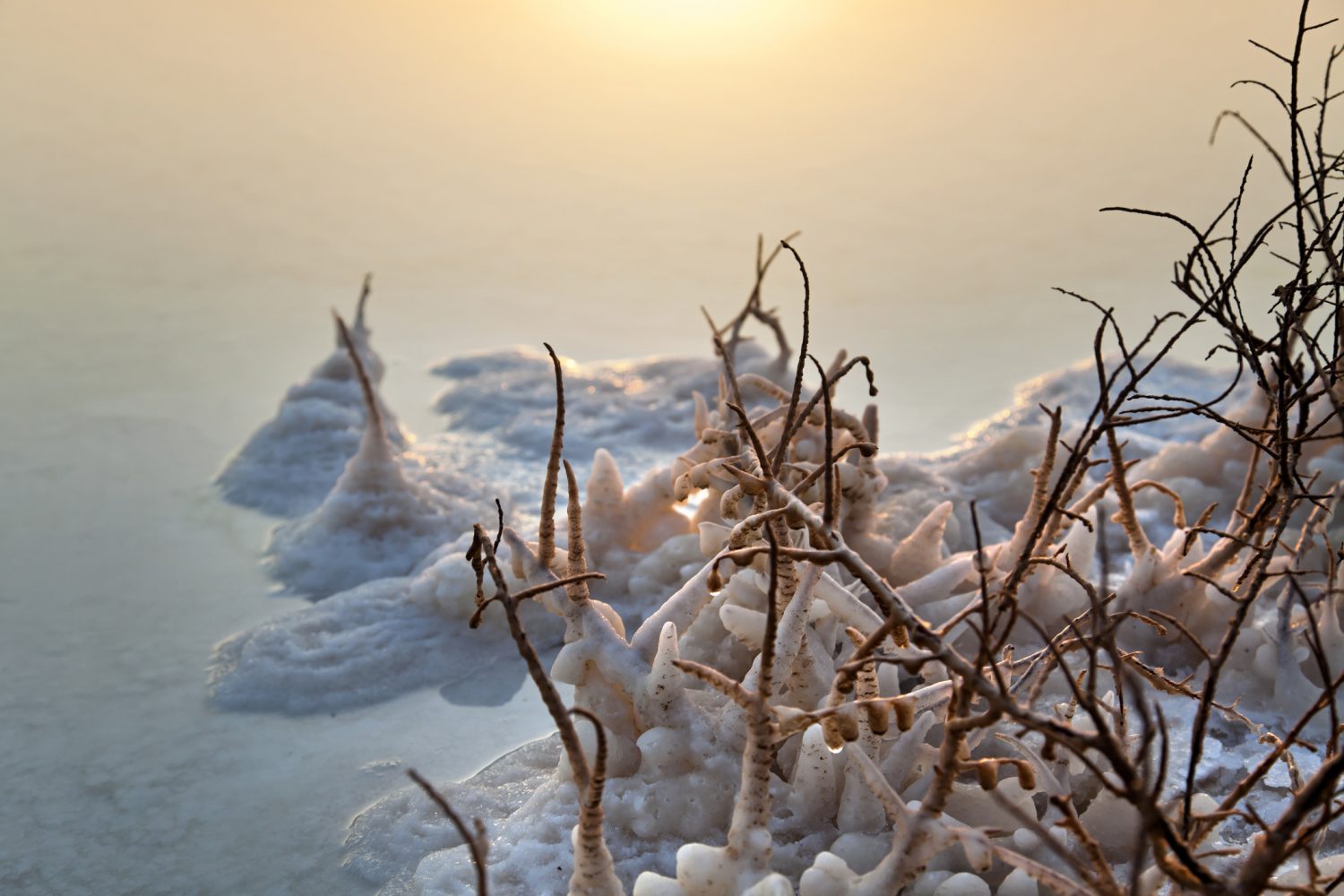 It’s dawn at the famous Dead Sea in Israel. Salt clusters grouped on the remains of a withered bush break the orange hues reflected in the calm shallow waters.

Nature is therapeutic—we have been aware of this for eons. Whether a view of trees from the office, a lunchtime break in the local park, or an evening walk with the dogs, that exposure is often an integral part of our lives. But the term nature is not always interchangeable with wild. The wild places are alien to our normal lives. They are outlandish territories, unseen from the window, or during the daily commute. And yet, perhaps because of that distance, there is a deep fulfilment to be found there. As we wander in strange lands, we understand what it means to be human, know our fragility, and appreciate the little things. Never has this been truer for me than during my experience in the West Bank.

I was working in Ramallah, a city a few miles north of Jerusalem, but worlds apart. A bustling, hilly place, its people are modern, friendly, and of remarkable culture. I was fortunate to travel during my time there and visited the holy sites in Bethlehem, Jerusalem, and Jericho. The glorious mosques and magnificent churches attracted an eclectic range of pilgrims and tourists, appearing as though a microcosm of humanity. These places were undoubtedly beautiful, and the sense of euphoria from their visitors was palpable. Except there was something missing for me.

The West Bank is an area of the globe known for conflict and complexity. The politics of which are irrelevant to the natural world. The infamous wall, an extensive barrier of concrete and steel which separates Israel from the Occupied Palestinian Territories, seemed to represent the antithesis of the wild. Whether perceived as righteous protection or a symbol of oppression, the wall is an ugly sight. The checkpoints between zones were not much better—grey artificiality fermenting in a tense atmosphere. The areas immediately around them crammed with rotting mounds of junk and broken vehicles.

Nature was clearly not there. Surrounded by suffocating urban decay and concrete fortifications, I was acutely aware of my distance from the wild—not only in physical distance but also from a human perspective. That precious link to the untamed did not exist, and I could feel myself becoming anxious and tetchy. After a few days, I had to get out, and luckily for me, my colleagues felt the same. We planned to hike to the riverine valley known as Wadi Qelt. 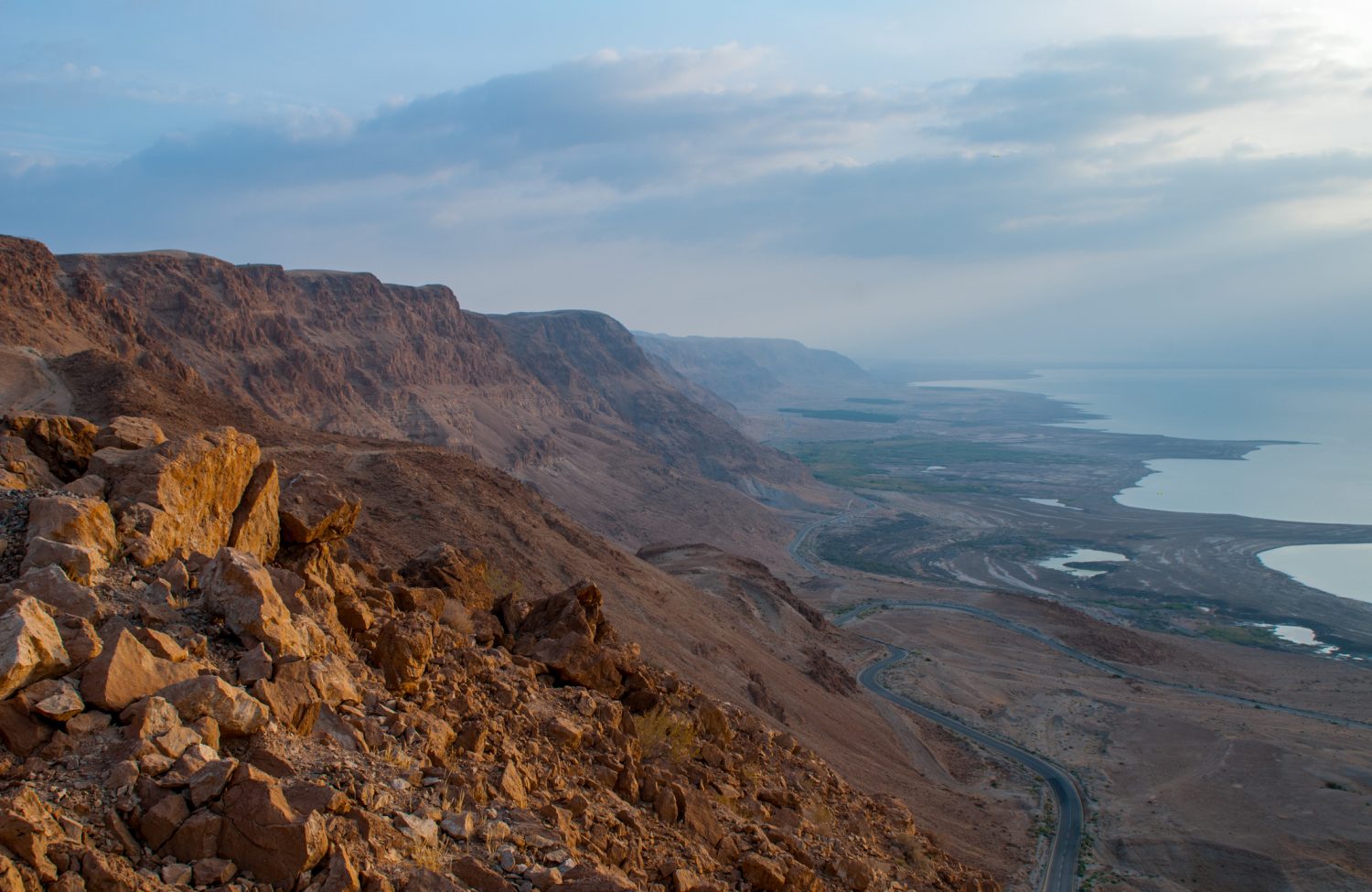 East of Ramallah lies rugged mountains and the Judaean Desert, or Yeshimon, meaning wildland. It’s a diverse range of escarpments, hills, and ridges dropping sharply to the Dead Sea and Jordan Valley. As I drove our comically inadequate multi-purpose vehicle along the precarious mountain roads, I could feel my mood lifting as we left behind the traffic, grime, and human complications. Parking up on a reasonably flat tract of coarse sand, we strapped on our packs and headed into the wild. It felt good.

With every step into these unknown lands, my anxiety dissipated. The air was clean, almost primal, and although I knew that humans had traversed the mountains before, I knew too that this savage domain considered them a passing triviality. It was just as I had this thought that we came across a long crisscross of trenches, hacked directly into the rock. Despite the labour
and equipment committed to building them, I was sure that from a bird’s-eye view, it was nothing but a faded scar—a barely visible slight from a conflict decades before. This wild place did not care when or why they were built. Why should it?

With miles of emptiness around us, and after hours of hiking, the contours eased, and we headed towards the wadi. Pausing for a photo opportunity in a series of natural caves, we were disappointed to find them carpeted in goat dung. Not letting that stop us, we were successful in capturing an extraordinarily malodourous memory.

As I stood on the hard, cracked earth, I realized that never before in my life had I felt so insignificant. The night sky was vast and open, no tree or buildings or flashing lights could be seen—just a starlight-punctured void.

Heading towards the stream, we clambered down the gulch, miniature clouds of dust kicked up whenever we slid or lost our footing. With aching knees and burning hamstrings, we reached our destination. At that moment, nothing needed to be said. The only sounds were the wind and the tumbling babble of water. It was healing; I closed my eyes, and the anxiety melted from me. The wild restored me, as is its way.

It is a habit of the soul to seek out the wild places, although one that most people have forgotten. Wildness restores faith in something greater than ourselves; it brings clarity into our often clouded minds, forming a perspective that is hard to come by in our demanding lives.

We are living through strange and uncertain times, 115 but the world has faced far worse challenges, and the wild places have endured. There is time now to dream, plan, and prepare. Vehicles may be selected, and routes decided. But wherever you go, whatever means of transport you choose, you owe it to yourself to escape to the wild places.

Thomas Henson is an educator and writer based in the UK. A former military police officer and ex-bodyguard, he has lived and worked in a variety of countries, including Sudan, Tunisia, Poland, and Israel. When he’s not teaching, Thomas is on a mission to track down the most interesting places, people, and stories. A fan of ancient mythology, his next big idea is to explore Scandinavia, to track down the locations that inspired Nordic folklore. Thomas is married to the creative and talented Emily, and a proud dog-dad to two Nova Scotia duck tolling retrievers. He also has two cats, who do not earn their keep.