The excitement of what lay before me had purloined any chance of slumber on the six-hour flight from Qatar to Nepal. Despite a 1:00 a.m. departure, I kept my eyes glued to the horizon, willing the sun to climb as we raced toward it at 420 knots. My breathing quickened as the first blueish-gray hints of dawn began to appear, long before it would for those awaking souls some 37,000 feet below me. We started our descent just as the sun fully crested the snowcapped mountains in the distant east. Its glow illuminated the terraced fields and colorful villages west of the Kathmandu Valley. I was entering a land to which I had never journeyed, on a trip that I had been pressured to take, to participate in what I thought would merely be an interesting motorcycle ride with friends. Little did I know the next two weeks would transform my perspective and create a desire to experience this life on a more intimate level. 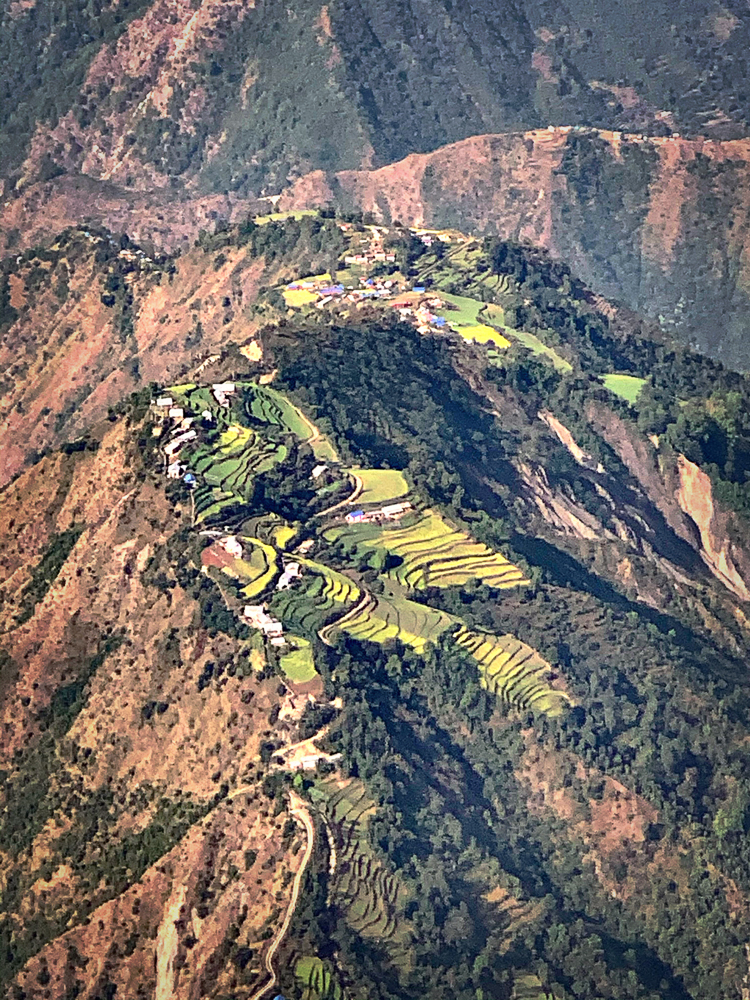 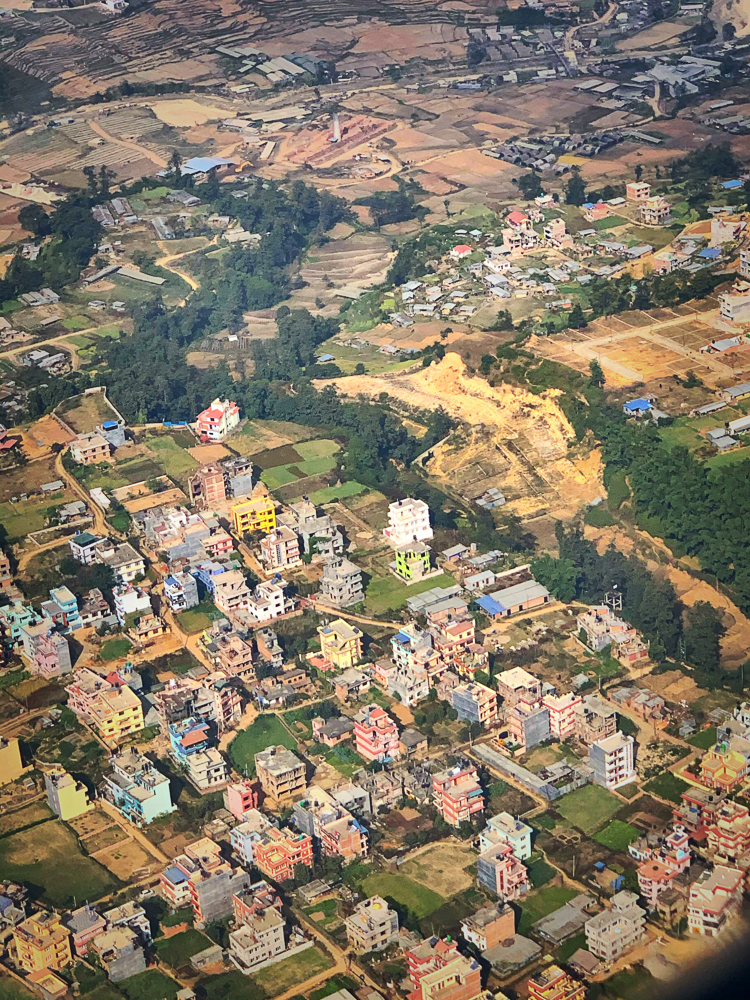 As I entered the terminal and went through customs at the Tribhuvan International Airport, I was still naive to the possibilities this adventure would hold. For now, it was time for a sensory overload courtesy of the fast-paced city of Kathmandu. Colors were everywhere, from the prayer flags that adorned so many structures to the rickshaws that crowded the city streets; the use of these vibrant hues added a splash of brightness around every corner. The market in Thamel bustled with residents and tourists of all nationalities, making their way through the crowded streets. Vendors called to each passerby from their shops, which sold everything from meat and grains to souvenirs and backpacking supplies. The smells of spices and fresh bread mixed indiscriminately with the odors of motorcycle and automobile exhaust. Horns blew, people hollered, photos were being taken—and I was mesmerized. My neurons fired at a frantic pace as I walked to my hotel and, even after the sleepless night before, I found it difficult to drift off to sleep. 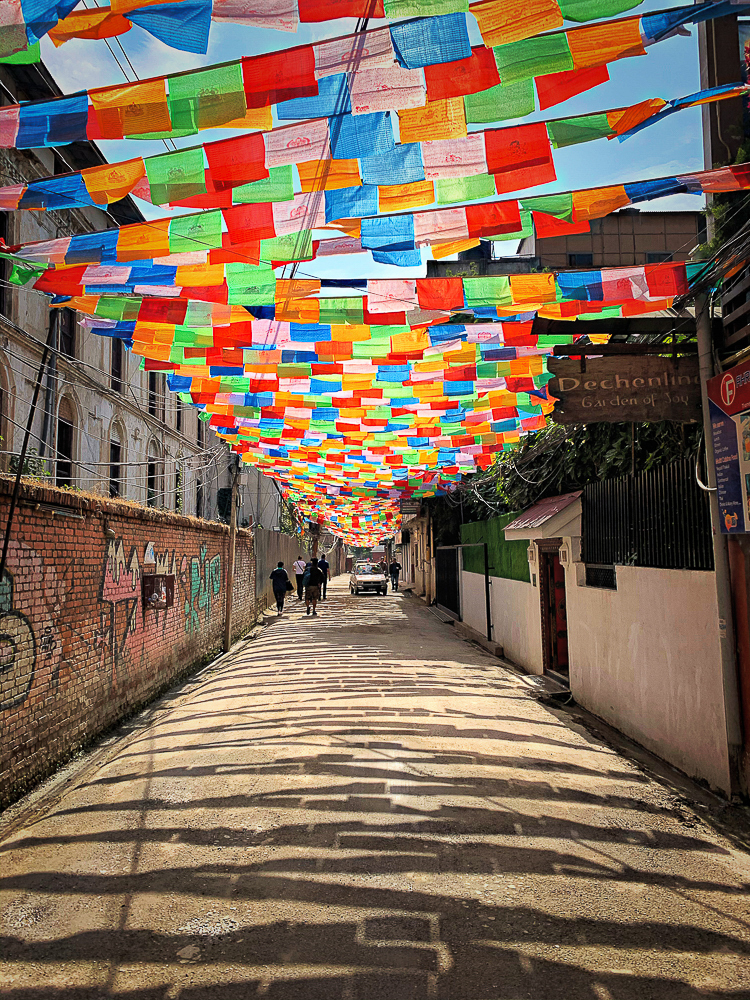 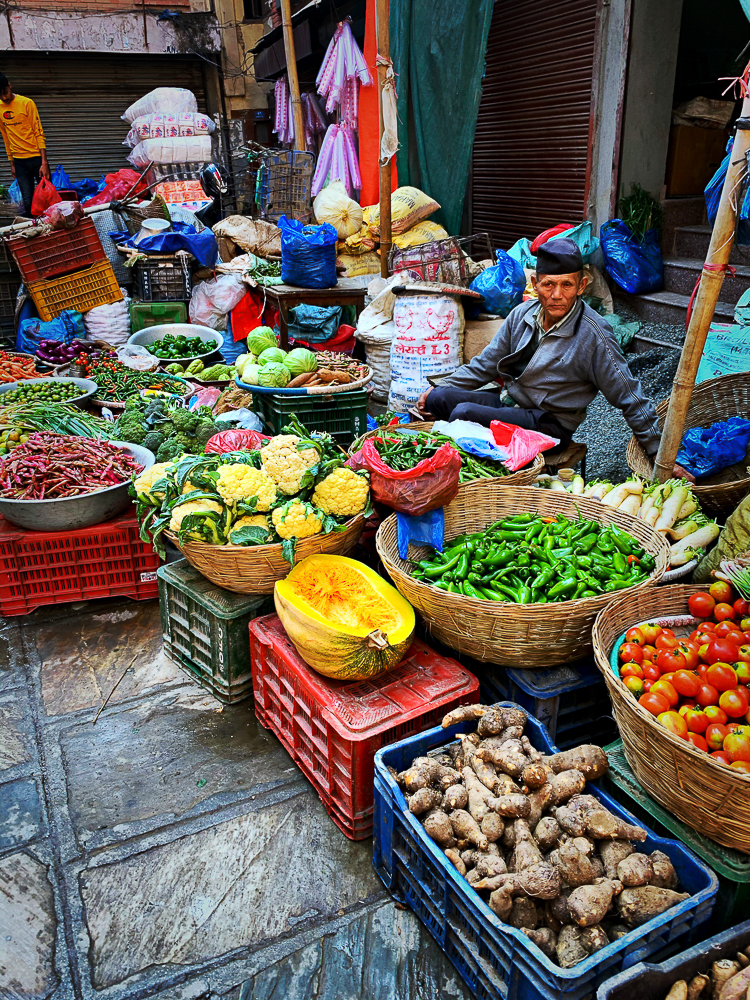 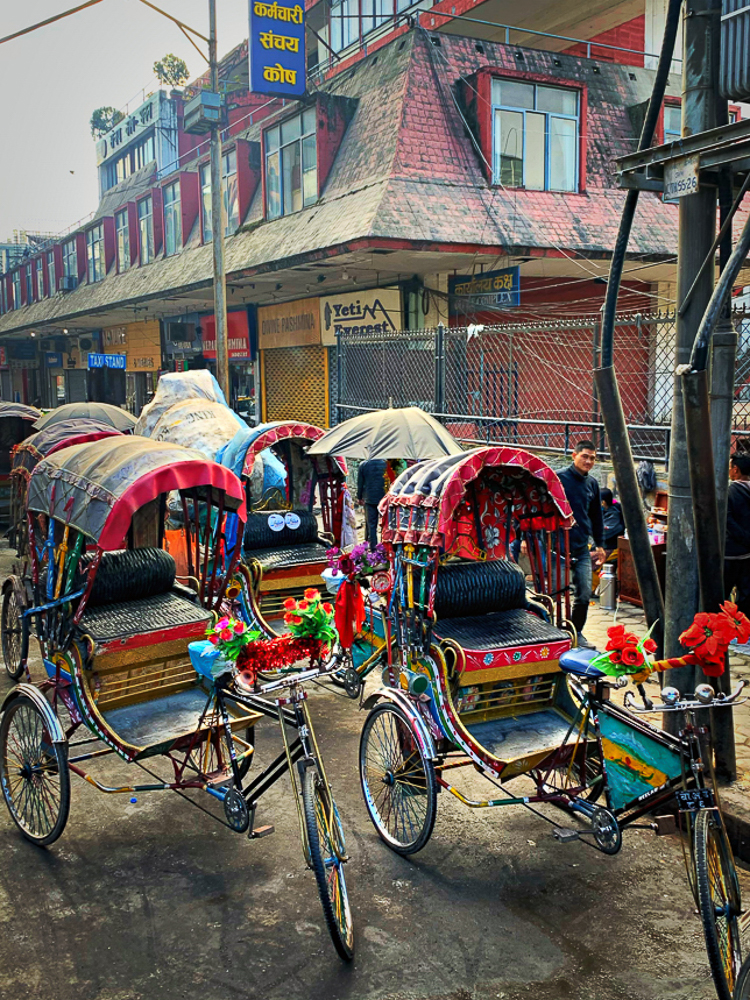 The following morning, I met my friends for breakfast. We prepared for one more day of exploring the city before departing on our motorcycle adventure through the Mustang District of the Himalayas. We visited Swayambhunath, often referred to as the Monkey Temple. The hillside paths ascend upward to a brilliant white stupa, encircled by pilgrims and the curious making their way through a maze of prayer wheels and vendors, followed by monkeys in search of their next easy meal. Next, we made our way over to the Boudhanath Stupa where devotees practiced their religion with posture and prayer while women poured hot melted wax in pre-wicked candle molds for temple services. While these two destinations were interesting, they paled in comparison to what awaited us that evening as we entered the gates into the courtyard of the Pashupatinath Temple. 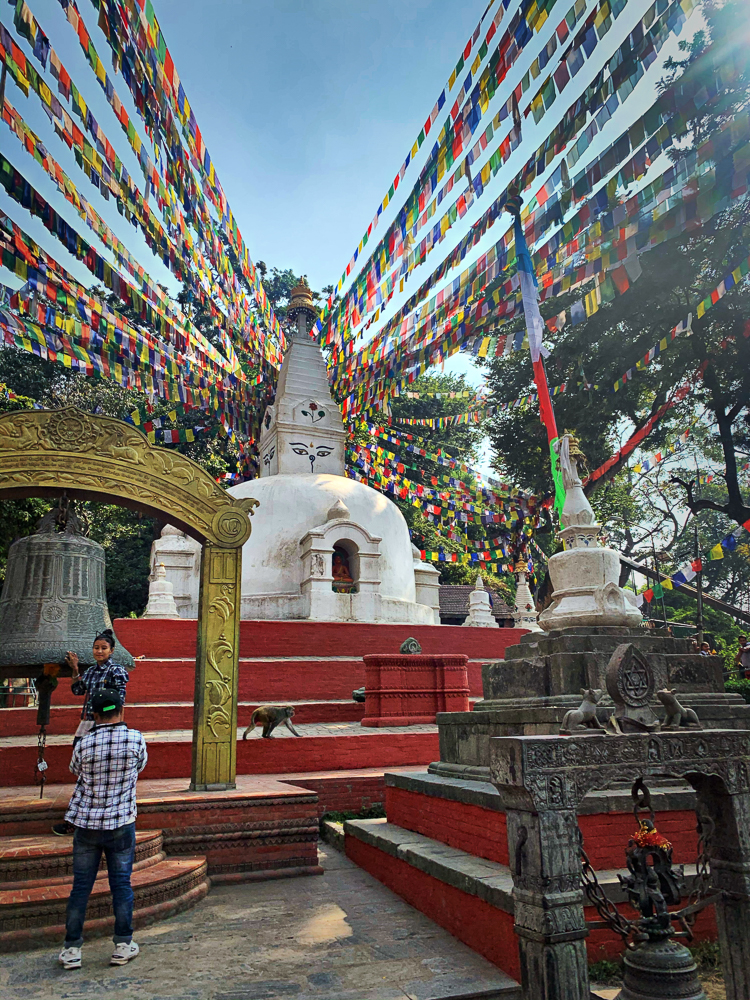 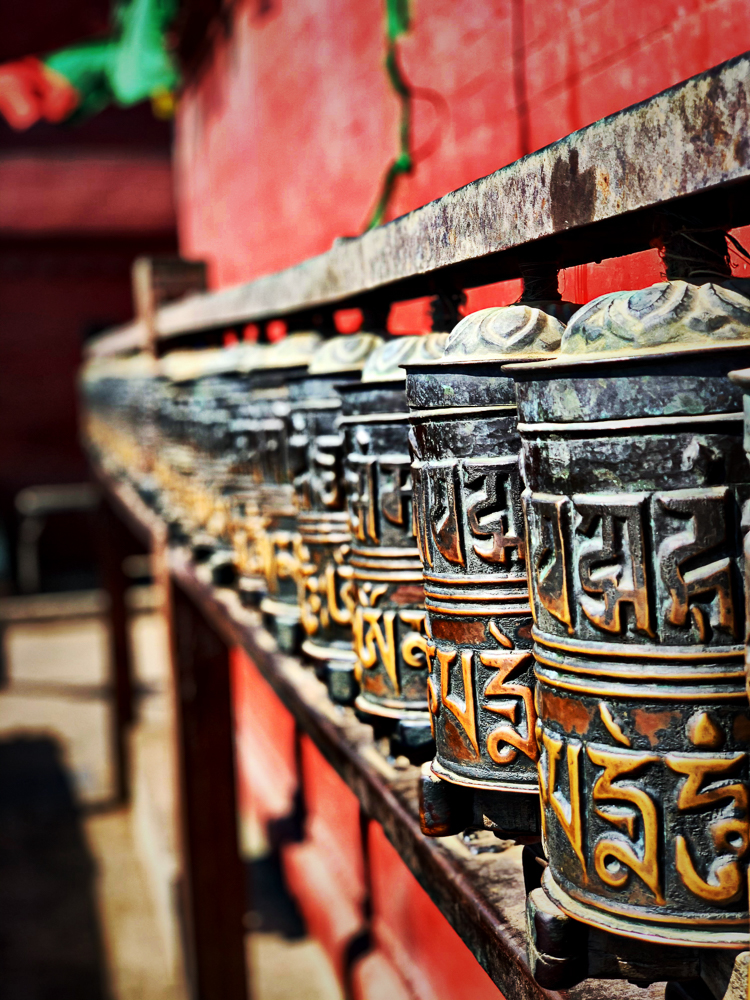 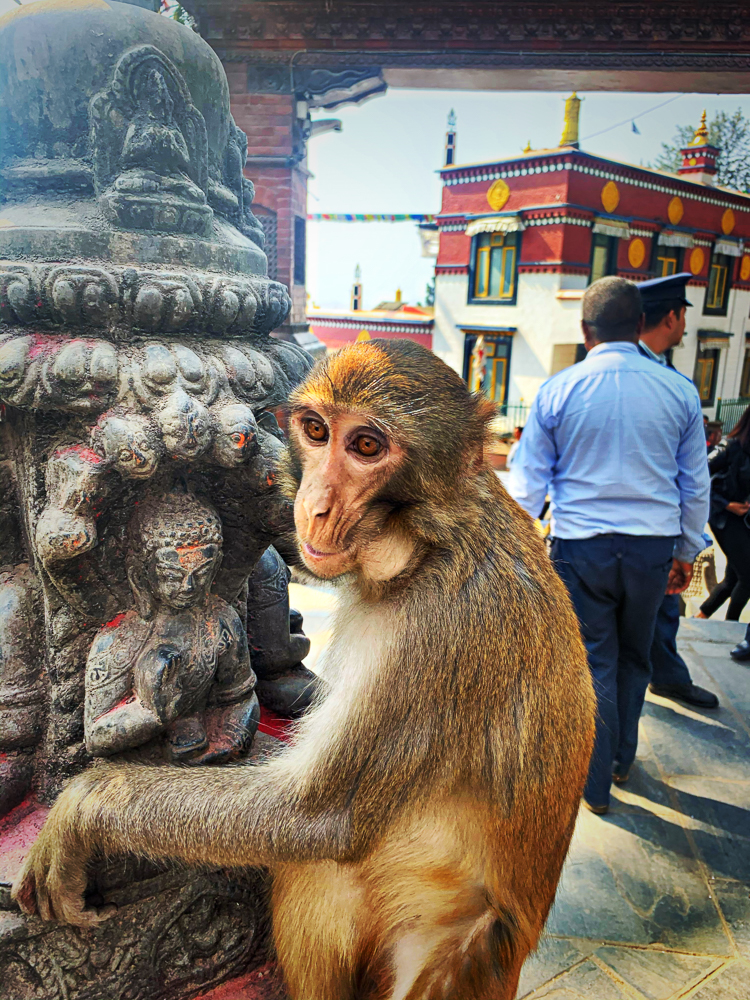 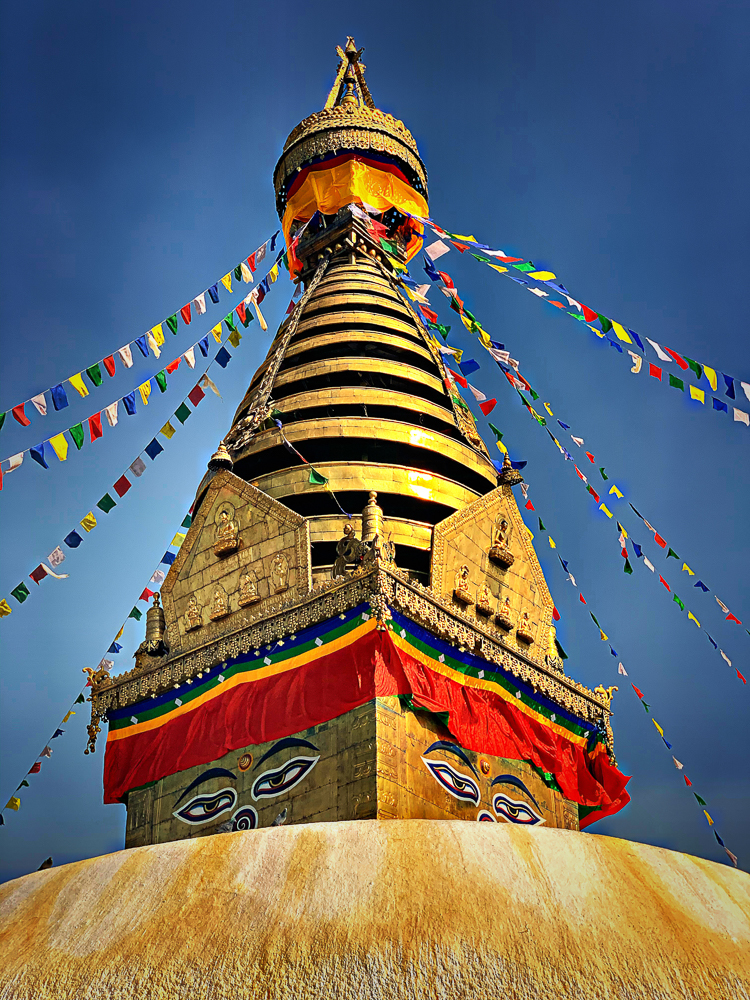 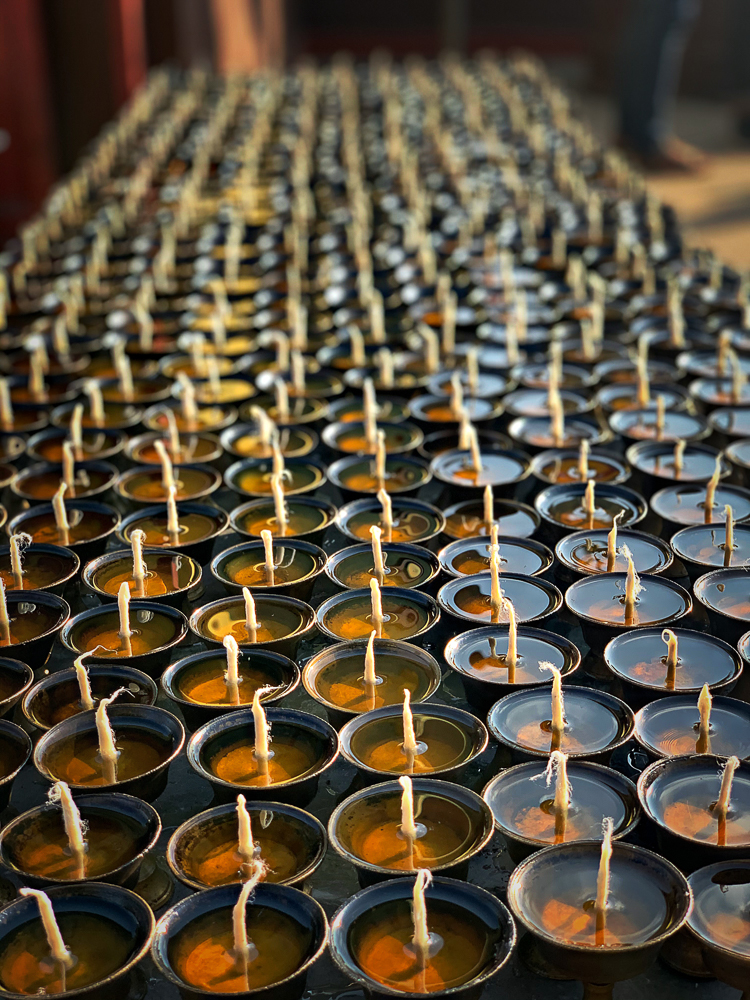 The temple compound is built along both sides of the Bagmati River and is considered one of the holiest Hindu shrines in Nepal. The monumental sanctum devoted to Lord Shiva calls to thousands of followers every year and, in 1979, was declared a UNESCO World Heritage Site. Yet, the most fascinating ritual on the temple grounds was not the prayer chants or the bowed heads but the open-air cremation ceremonies that took place along the holy river’s edge. After preparation, the body is wrapped in a white and red or gold cloth, a garland of flowers stretched along the shroud, and the loved one is placed amongst neatly stacked wood and reeds as a mourner ignites the funeral pyre. Though different from anything seen in our Western culture, the devotion of the family and friends grieving around the altar is profoundly felt. 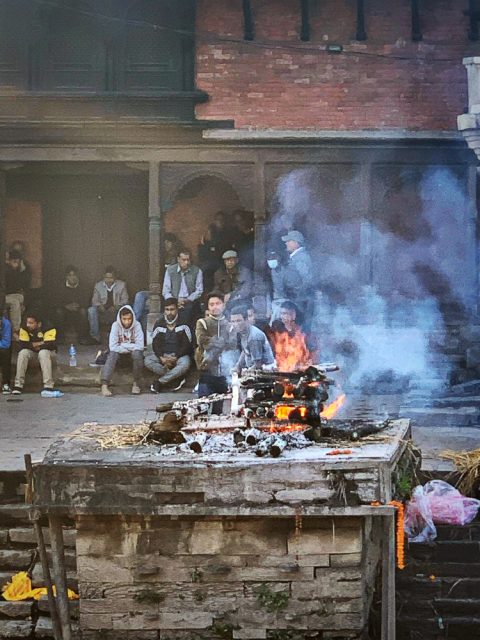 The following days continued to bring both excitement and enchantment. We made our way out of the busy streets of Kathmandu, where seemingly no traffic laws were followed, and onto the highway leading west toward the city of Pokhara, where traffic laws are seemingly nonexistent. After an evening meal and a good night’s rest, we continued west on our Royal Enfield motorcycles along the Modi River until its intersection at the village of Beni with the great Gandaki River. The Gandaki flows from its head along the Tibetan border southward until ultimately joining the Ganges River in India. The Gandaki River Valley would be our conduit northward into the Mustang District and, for me, a new perspective on life.

As we wound our way back and forth on the ascending switchbacks and across the narrow, suspended bridges, life happened at a different pace. In a small village between Beni and Tatopani, I stopped my motorcycle, taking in the moment as my friends continued onward. To my right, men were in the terraced fields below me using scythes to harvest wheat, while others were winnowing the grain in preparation for its storage. Bundles of corn were hoisted high alongside the exterior wall of a home to allow it to dry in the arid mountain air. To my left, a woman washed her laundry in a communal basin whose water flowed, without the need of pumps, from the hills above the village. It was not the tasks that I found so foreign but the manner in which they were accomplished. It was easy to imagine that the Industrial Revolution had not yet made its way to these remote outposts, but I couldn’t help but wonder—hope, really—that it had, and these people had wisely rejected its convenience, opting instead for the value of simplicity. 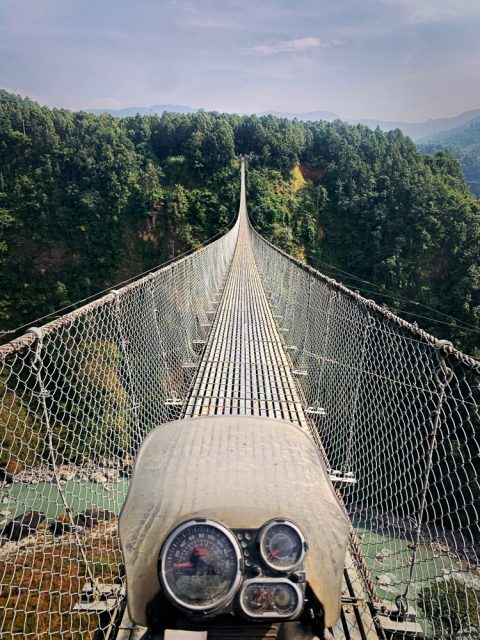 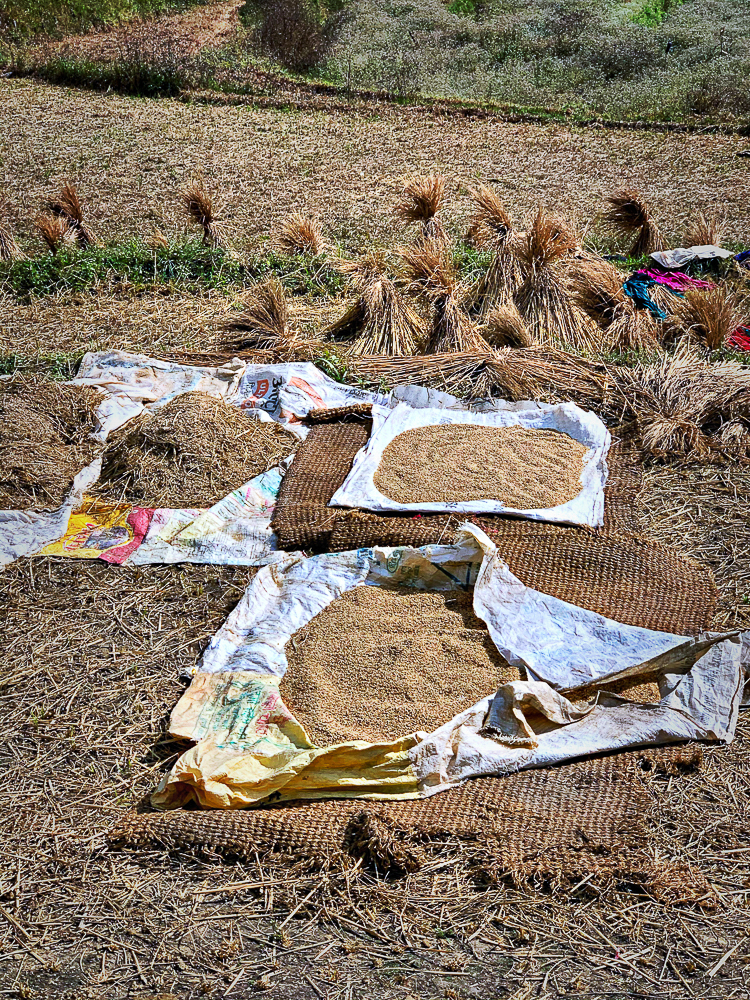 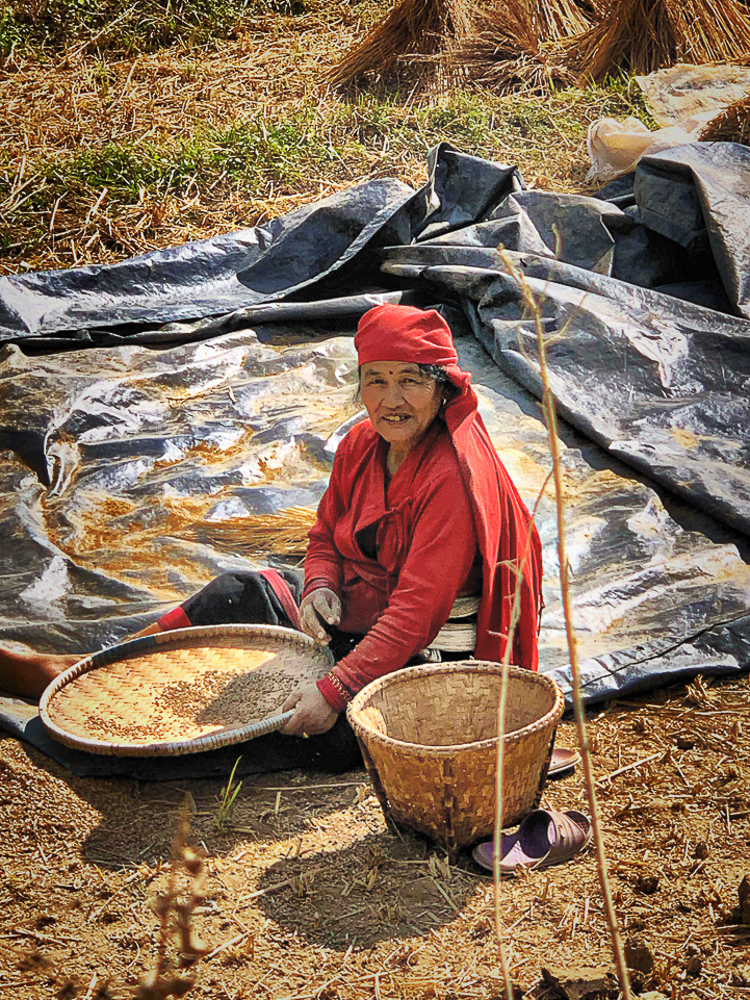 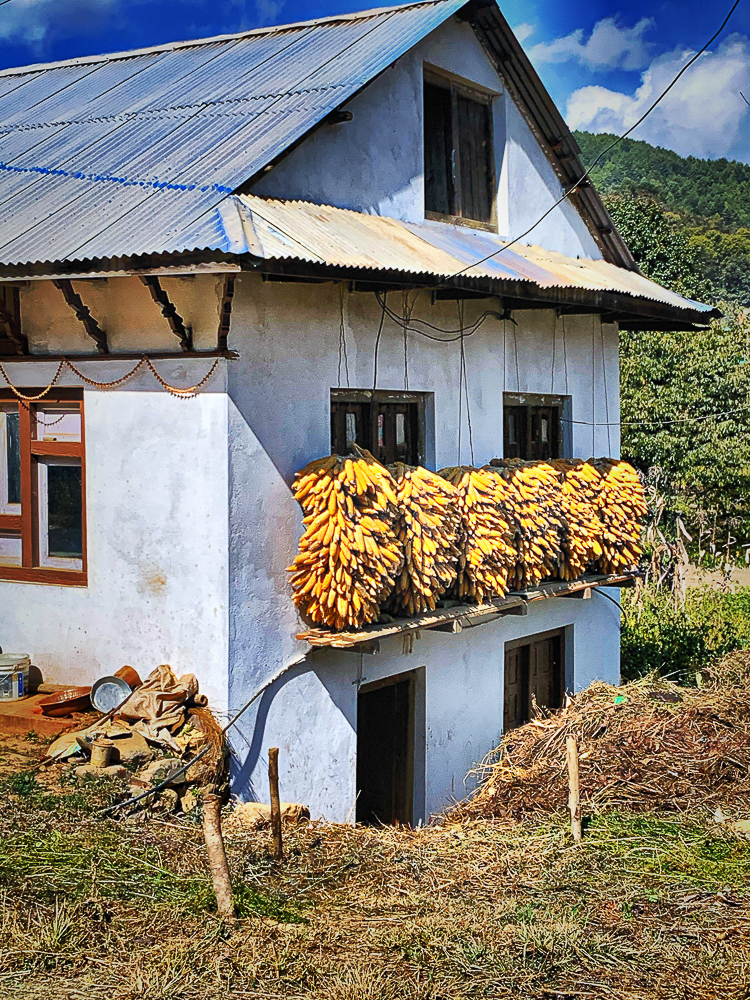 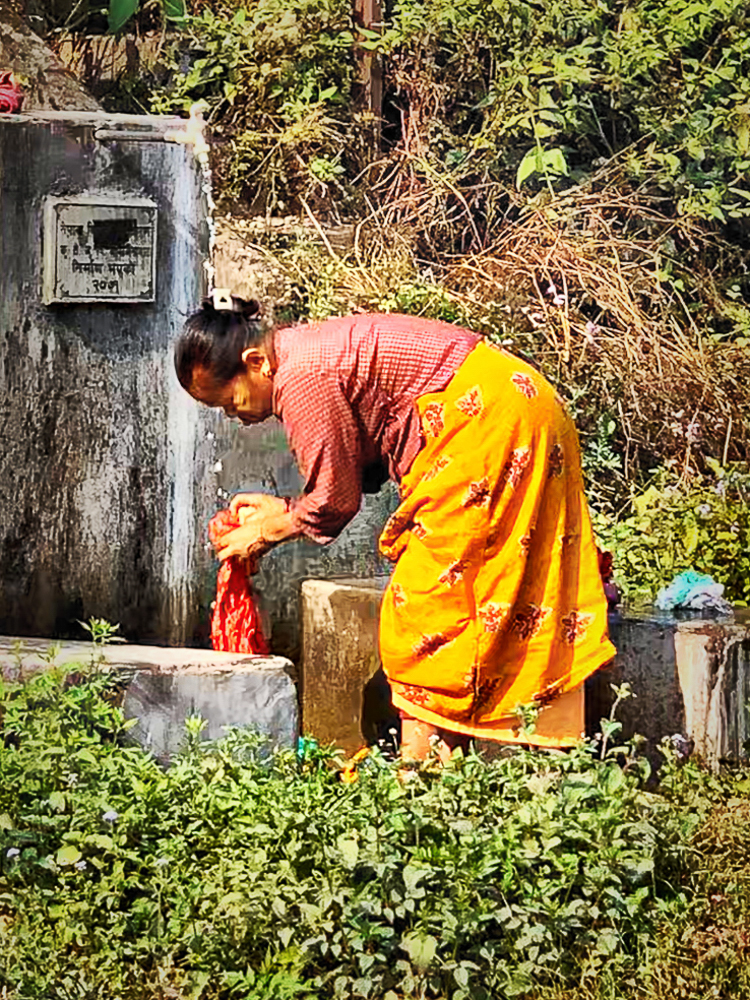 I threw my leg over my motorcycle and accelerated to catch the group. Not too many miles down the road, another friend had also stopped at an amazing vista to snap a picture, so I pulled in to wait for him. As I stood there, a man appeared out of nowhere—barefoot, dressed in black cloth, and carrying a simple yellow bag. He spoke no English but greeted us with a hands-folded gesture and the customary “Namaste.” He was tiny, maybe 5 feet tall, holding a staff, a small golden pot of some sort, wearing mala beads around his neck. Thinking that he might want an offering in that pot, I reached into my pocket for some money, but he quickly waved his hand to stop me. He spoke quietly and with purpose as I listened intently, wishing that I understood his words. Then after his brief monologue, he shook my hand and turned and walked down the road, leaving me to consider the interpretation. Were his words mundane or philosophical? Was he simply asking for directions, or was he providing them? I’ll never know for sure but will never forget the encounter. 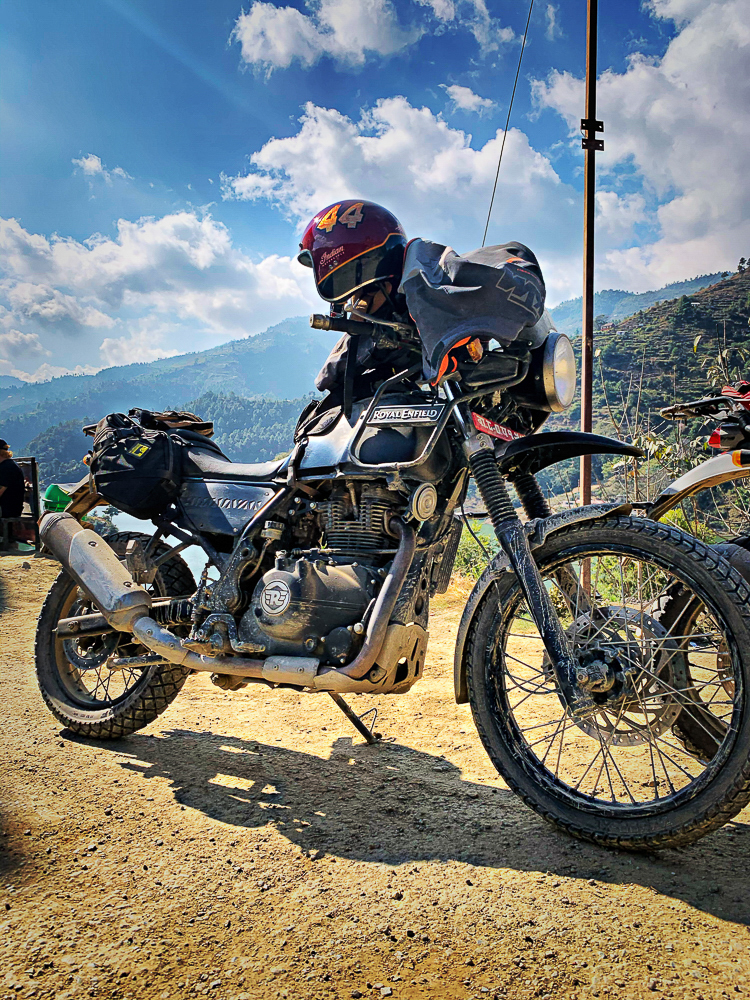 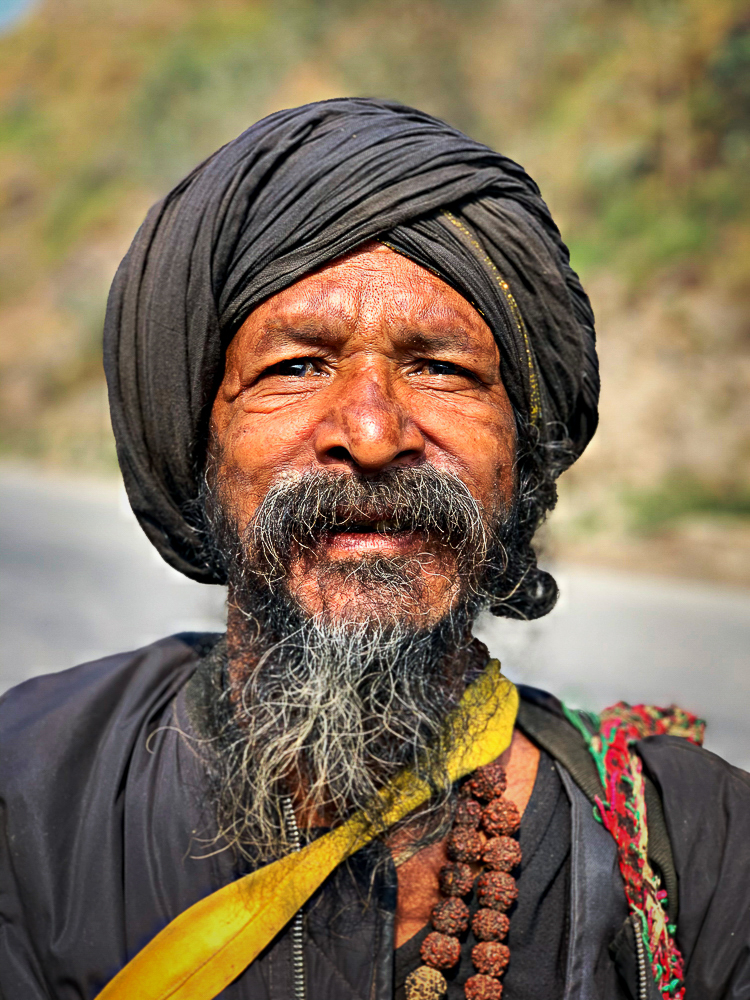 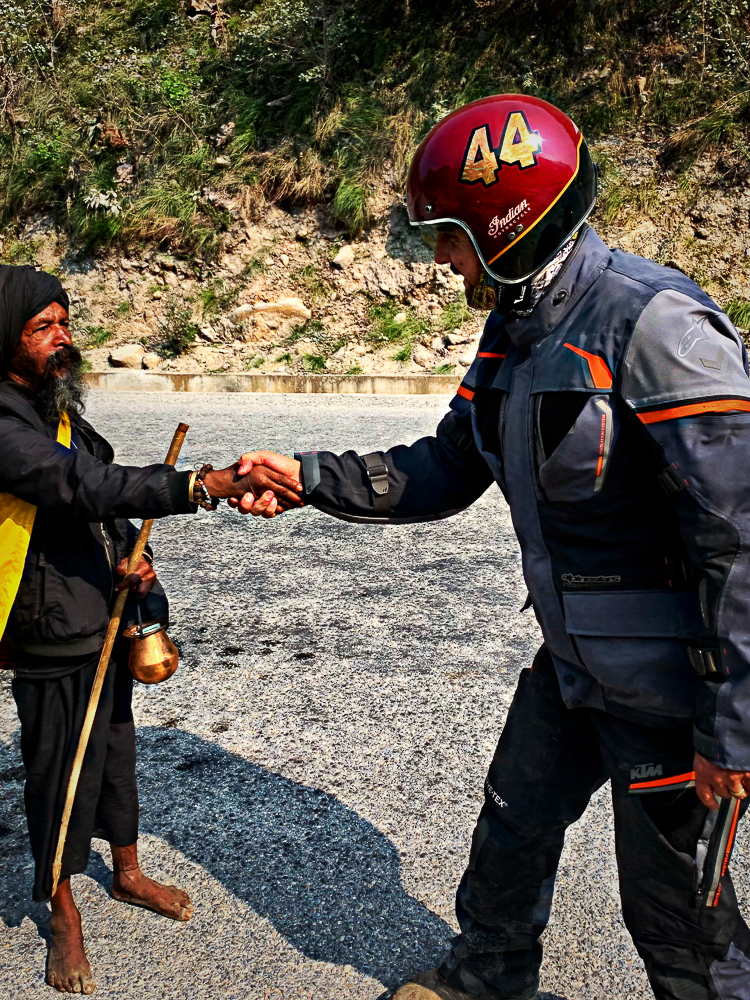 We continued northward over the following days, stopping at the small towns and villages for tea, a meal, a bed for the night, or all three. In Kagbeni, I had my only hamburger of the trip at the renowned YakDonalds Hotel and Restaurant. And in Marpha, I found the most honest advertisement at the base of a set of stairs leading high above the street to a Buddhist temple. It read, “THE VIEW FROM THE TOP IS BEAUTIFUL”, and it was. 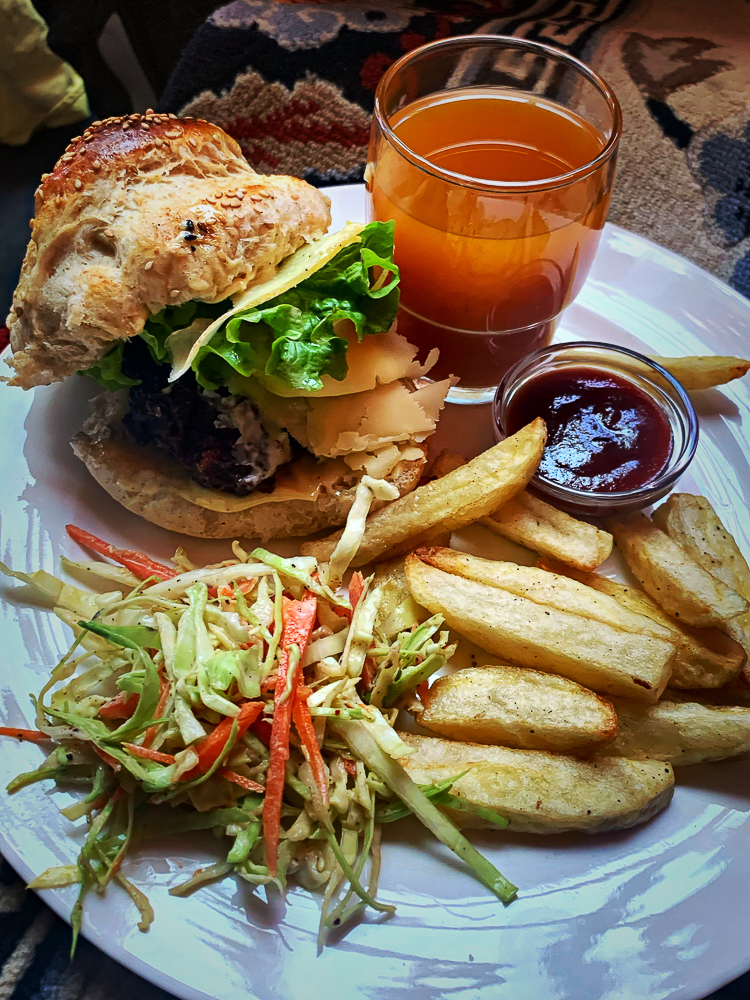 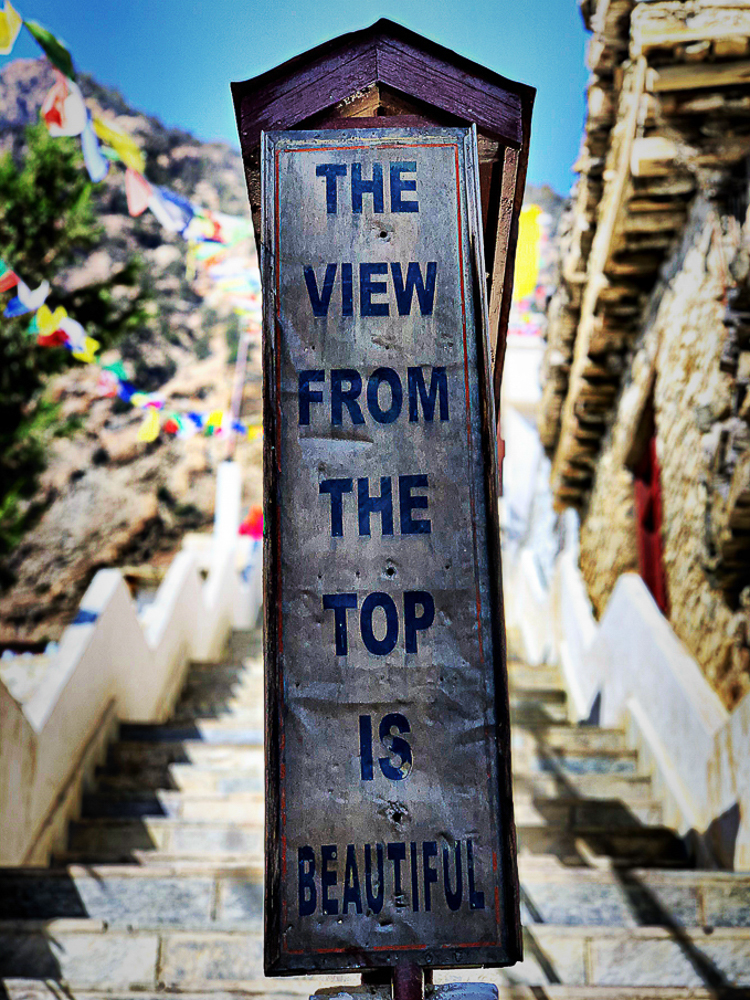 Our destination for this trip was Muktinath. It’s a sacred place shared in harmony by both Buddhists and Hindus and one of the most important pilgrimage sites in all of Nepal. With an elevation of more than 12,000 feet, the November temperatures plummeted as the sun fell behind the distant peaks. The heavy wool blanket on my bed was difficult to leave the next morning as the sun returned. I grabbed my bottle of water from the floor beside the cot only to find it frozen solid; the idea of a hot cup of coffee had never sounded better. 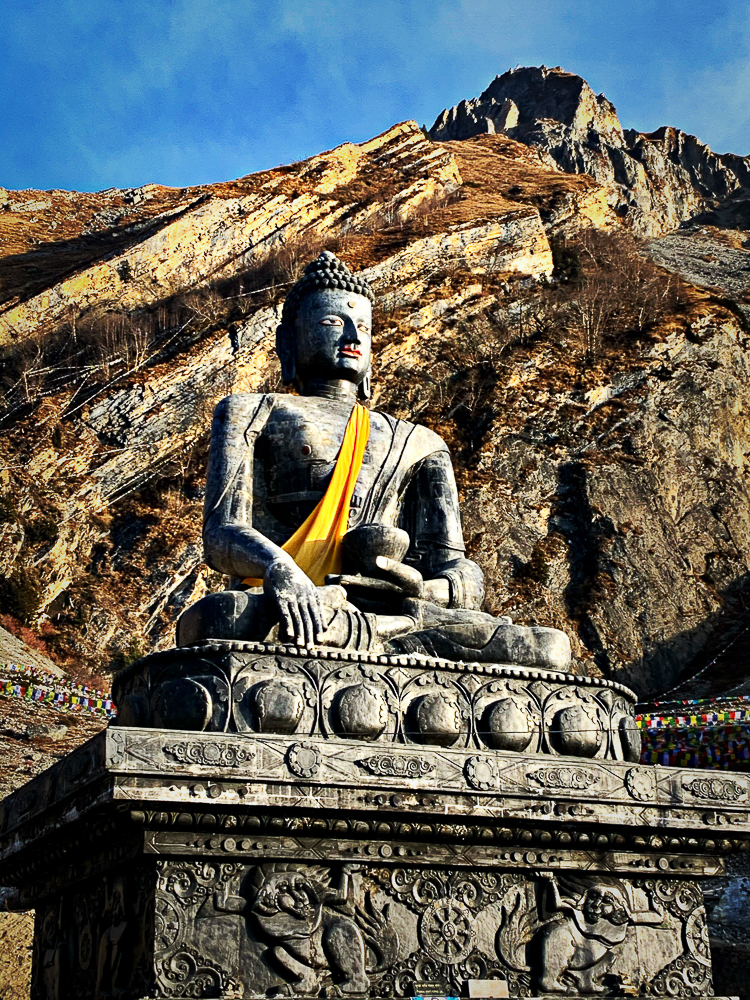 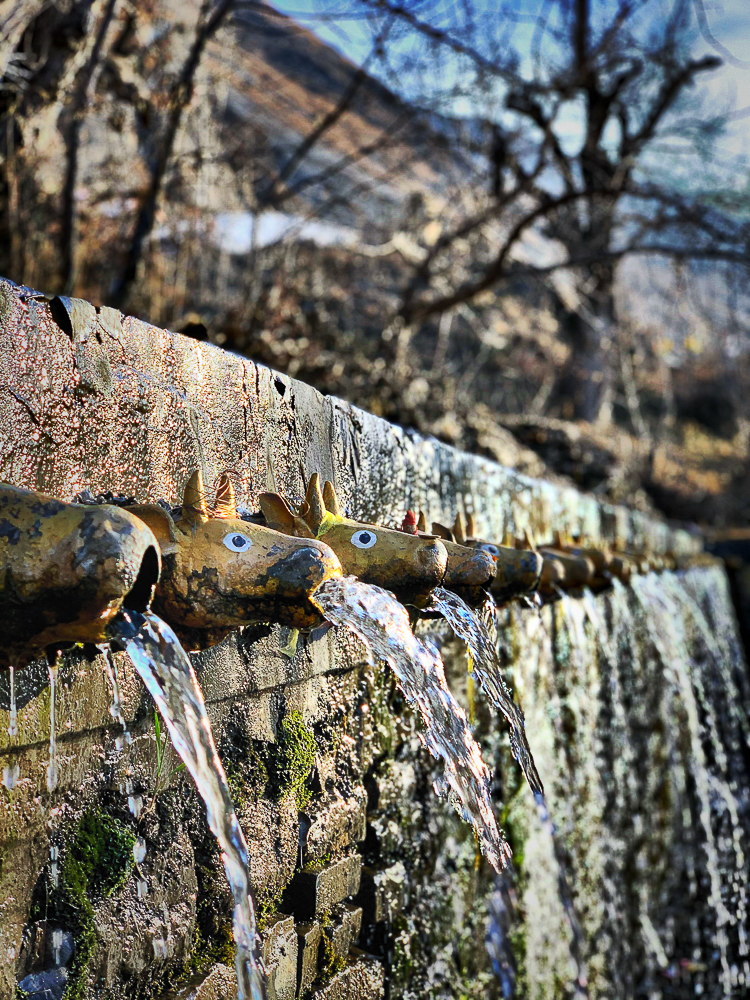 As we made our way back down the Thorong La mountain pass and toward the Gandaki River Valley, I noticed movement to my left. On the rocky hillside above me were three or four women and as many children, wielding hammers to crush the small granite slabs that had broken from the mountainside into even smaller pieces of gravel. They would then fill large baskets with the stones, hoist them up on their backs, and walk down narrow switchback paths to dump the heavy cargo onto a stockpile at the base below. From there, men would load the gravel into gasoline-engine-powered carts and carry the stone further to be used in road building and construction. This was a moment that would forever change the way I view the world around me. I was raised in a home by parents who taught me the value of hard work, a witness to the fruits of success that come from waking early and working late, and had modeled this role for my children as well. But here, high in this remote wilderness, were individuals who certainly knew hard work, who started early and finished late, and who were devoted to providing for their families. If these traits are the complete recipe for prosperity, then these people should be living in the finest homes and being driven in the nicest cars—success as described in the modern world. What separated my lot and theirs was not our efforts but our opportunities. I had no part in choosing the family that I would be born into, nor the country in which they lived. What a humbling experience it was to truly understand that we don’t really earn our success; rather, it is given to us, and “to whom much is given, much is required.” When we learn that our life is the sum of the opportunities that we capture, given to us by others, and that no one actually pulls themselves up by their own bootstraps,” then we can find the joy in giving to others. 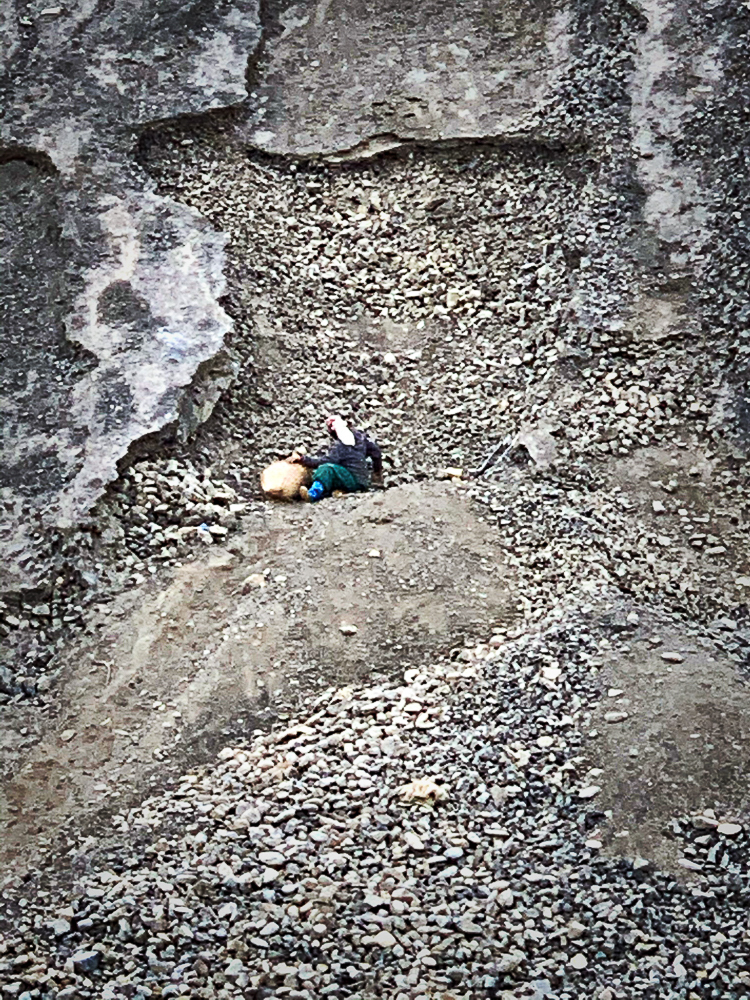 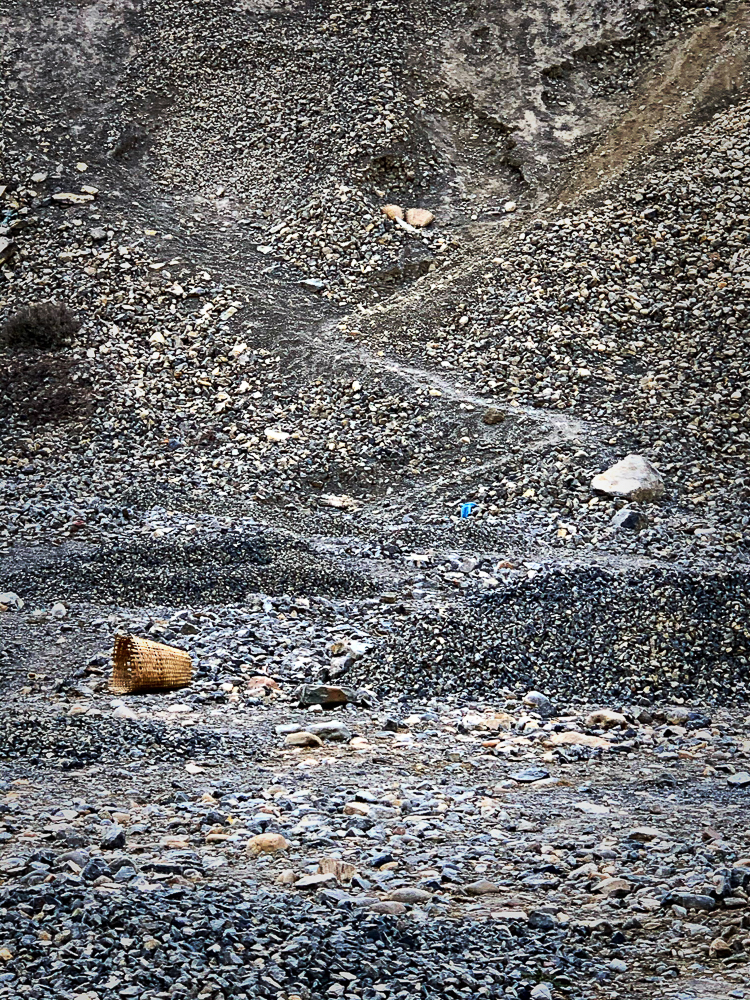 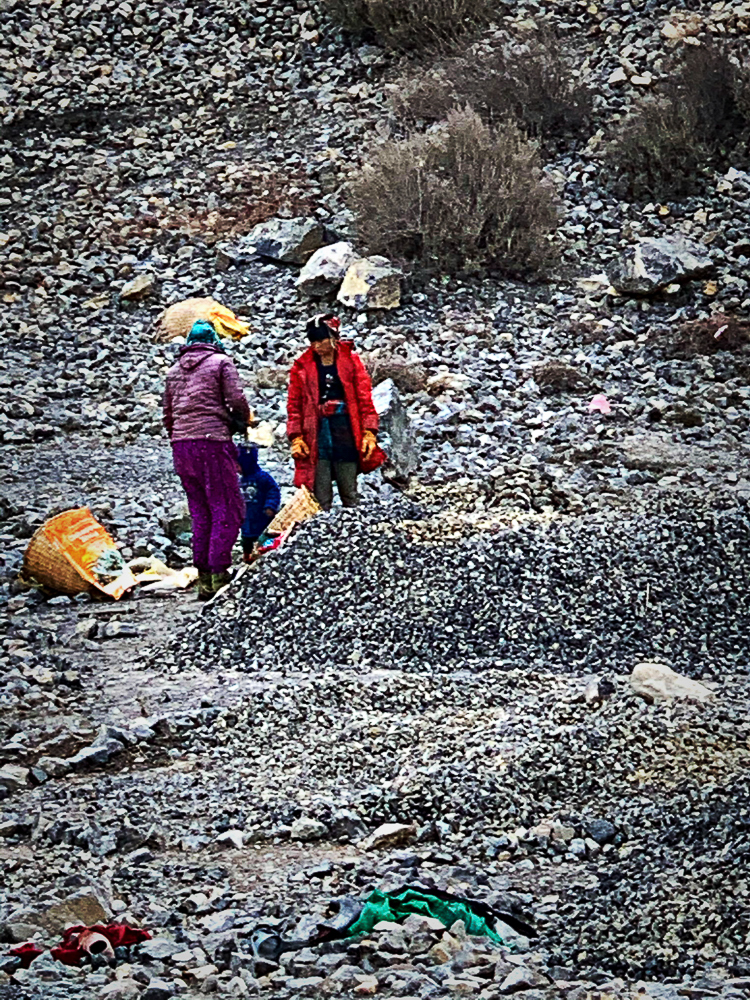 Isn’t this the reason we travel, the motivation for exploration, and the drive to discover what lies ahead? Are we not all, deep down inside, searching for the satisfaction of understanding? It doesn’t matter if we are overlanding by foot or by motored transport, whether in a group or alone. What begins with a journey of selfish motives so often culminates with selfless appreciation. Travel continues to provide me with a higher understanding, an asset that can benefit us all.