Refuelled and rested in Bolivia’s constitutionally recognised capital, Sucre, we scurried the 200 odd miles over rutas 5, 23 and 7 leading us into the urban sprawl that is Cochambamba. The streets were saturated with photocopier shops, crammed in between kiosks bursting with processed junk, chips and salsa, banks of candy and great walls of electrified soda. Hotels and motels straggled over the city were also bountiful, budget-traveller hostels not so much. We stumbled upon a little serendipity tucked away down Junín street, Hostel Casa Vieje Colonial. It didn’t burn a hole in our pockets to: securely park our wheels with easy access, relax the weary muscles in a hot shower or store our stuff to take a two-day trip to Torotoro National Park. Perfecto.

The drive to Torotoro was akin to the Wizard of Oz yellow brick road, except it was bobbly and rough-hewn as opposed to uniformly bricked and a radiant hue of yellow. Rugged road became narrower in parts, windier single-track lane became packed earth peppered with knobbly, bone-like flints. The snaking, slapdash cobblestones glistened in the wet. Parts of the road were slick with mud, hindered by the odd land slide and broken by flooded river crossings. No wonder it took four bum-jolting hours to travel 80 miles, even in our hired four-wheel drive. The same cobblestone-fashioned road made a sizeable appearance en route to Cochambamba, making it slippery under foot and an ice-rink for two wheels; in Bolivia’s wettest month of the year, it took a thimble of sense to catch a four-wheeled ride over to Torotoro.

Home to mineral-rich canyons and cavern-filled caves, blind fish and a turtle cemetery, our sole impetus for seeing Torotoro National Park was to witness 65 million years of natural history. Dinosaur footprints! Clearly imprinted in the petrified clay, some were the size and depth of footballs, others more precise leaving a three clawed impression. There were thousands of depressions, dotted around so you could follow their trail; trace where the owners had once chased one another, sauntered around or stomped away somewhere. As far as palaeontology goes, it piqued my interest more than any museum glass-housed fossil.

Deep into folds of the National Park we followed our mountain-goat guide, Timo, pulled along in his wake. At the furthest point on we met Elmina, carrying her 18-month old son Hilbej in an aguayo, a traditional Bolivian sling. It left me wondering how these native mothers didn’t resemble stevedores. Hilbej perfectly personified Mowgli from The Jungle Book; above a button mushroom nose, he looked at me through dark, almond-shaped eyes framed with a shock of longish black hair against smooth, swarthy skin. He hoisted himself up on his mother’s two rope like braids; more black than grey although a little salt had crept in. I could only marvel at the indomitability of the very young in Bolivia – no seethe of frustration in the fierce sun at altitude. Just unconcerned acceptance through big, curious eyes.

Elmina received us cautiously at first, tinged with an inquisitive air while industriously spinning yarn from llama wool by hand. She seemed sufficient unto herself. Flashing a gap-toothed smile in a mouth that was more gum than enamel, and overactive eyebrows semaphored a tentative request. She was a thin and sinewy woman whose angular features had been weathered by the harshness of an outdoor life. I followed the opportunistic direction of her thoughts and handed over a few coins but what I wanted more was to cook a square meal for them both. 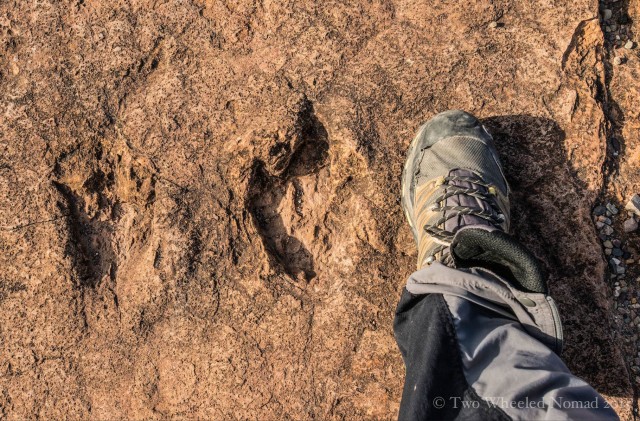 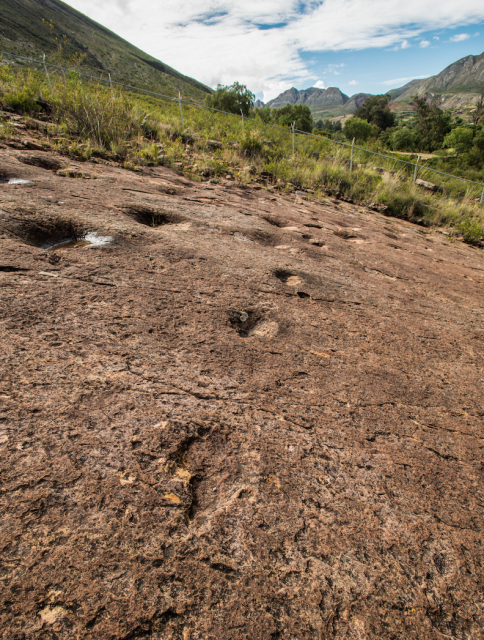 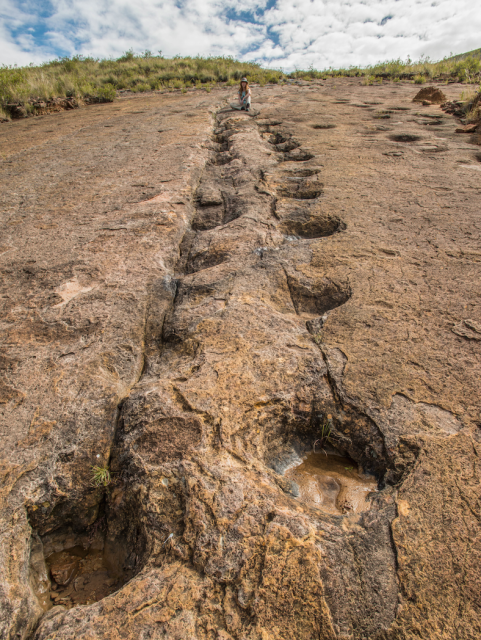 Torotoro’s unmissable presence of dinosaur footprints exist because during sometime around the cretaceous period, the now National Park was a flat and marshy ground – dotted with lagoons and deltas, where the vegetation was helped by a humid and mild climate. This supposed an excellent pantry of food for the carnivorous and herbivorous dinosaurs. Seen from the Carreras Pampa in the malleable saurian clay, all the dinosaurs left their personal seal, the footprints. A worthy detour and one I’m grateful we took.

Over 16,000 miles now registering on our ‘Adventure before dementia’ mile-o-meter, we rode out of Cochambamba, but not before someone waved at us wildly from across the street. The young guy was one of the flawlessly English speaking Bolivians we’d met from the Dakar Rally at La Chita. Fancy bumping into him on a random Monday morning, 500 miles from our initial chance meet. Further acts of randomness ensued when riding leisurely over a smooth ribbon of asphalt; Jason somehow managed to hit an unassuming rock. There was a gasp down the helmet’s intercom, like a wave pulling back over the pebbles but the impact was disturbingly gentle. A dull thud – like a soft unzipping, against the wheel rim. Still, it tore at Jason’s heart. Another dent in the wallet. The rim might as well have been made of chocolate.

Under dirty cotton-wool skies en route to La Paz, we drifted precariously at over 4,000-metres through a cloudbank in three degrees and eye-squinting visibility. The mist clung to us, damp and chilly. Two meters in front and the fog swallowed Jason up; I moved through it like a blind man groping his way down an unfamiliar corridor. I felt icy fingers reaching through my clothing and goosefleshing my skin. A thin, cold rain swept beneath slate-grey clouds, which grew darker and began to slant across the sky, fast approaching us. As the drizzle became heavier, the drops fell with an untamed intensity that made me huddle inside myself, clinging onto every vestige of warmth. It was challenging for the spirits not to dampen under Mother Nature’s unyielding, wet spell.

It was the way our dice rolled all morning; no double sixes eventuated for us. Be that as it may, it paled by comparison to glimpsing an ill-fated, mangled dog nearby a man’s corpse, head bloodied and arms contorted strewn on the roadside. A shrill voice keened in my head. I brushed my hair from my eyes, along with a tangle of unpleasant and discordant thoughts. I think I started to pray. It wasn’t a conscious prayer, more a desperate and silent and unending plea aimed at grey sky, which offered no comfort. I let my prayer play out to an unquenchable thankful feeling, buoyed up by the action of breathing.

The intense hiss of rain, grumble of thunder and bone-chilling morning finally gave way to china blue skies and a skin-warming 20 degrees Celsius. A stranger by the name of Oscar had got in touch online three days previous. Naturally he rationalised, would hear no refusals to his offer of invitation to come and stay. A week or a month, our choice. Having outlined a cheeky shortcut for us to avoid La Paz’s downtown medley of mayhem beforehand, we veered off the highway and pulled onto the top of a plateau overlooking a quiet valley of houses. Just ten miles from Oscar’s town, Seguencoma. The outlying fringe of La Paz – Bolivia’s second capital for the seat of government – is not what either of us expected. 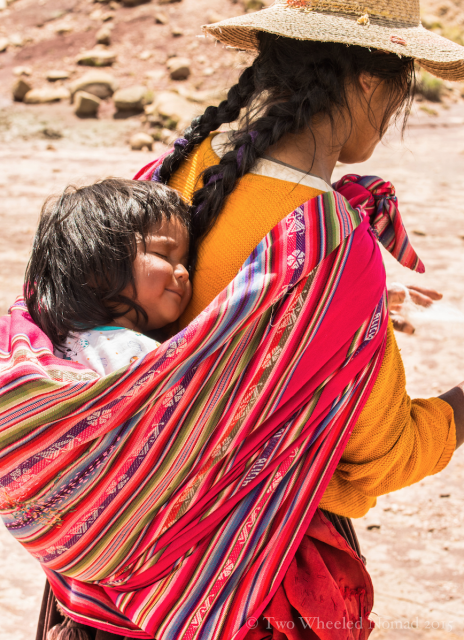 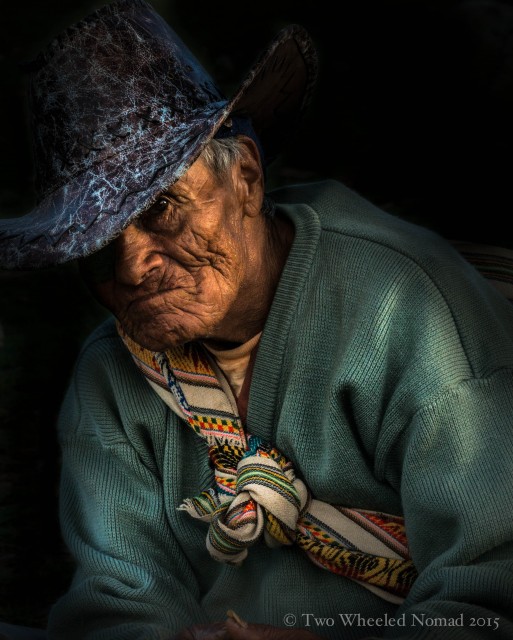 My ignorance was repaired when the lay of the land revealed enticing green mountainous landscape, interlaced with a rainbow of coloured houses, neatly arranged upon steep, rocky mesas. It was quaint, quiet and seemed safe from our vantage point. Not remotely akin to the picture painted from the guidebook, so often the way. Granted, we weren’t exactly downtown in the thick of the city but still. We descended as though on spidersilk into a pretty neighborhood of middling prosperity. I was so juiced, I had to stop the bike half way down to take in what my eyes were showing me. The landscape radiated an inviting appeal, optimized in a golden afternoon sunshine. I was pleasantly surprised. I cruised the rest of the way at milkwagon speed as the genial town opened up slowly on either side of me.

Within five minutes of pulling into Seguencoma – another calm and gentle residential area – Oscar, his sister and girlfriend greeted us with an enchantingly polite reception. Their smiles unwithholding. He seemed a man of substance, someone seasoned a little by life. High up in the hills, a rather rocky and rutty one in particular, Oscar opened up his home. He placed a Chuffla in our hands – a thirst quenching mix of Bolivia’s pure grape Singani, soda and lemon. 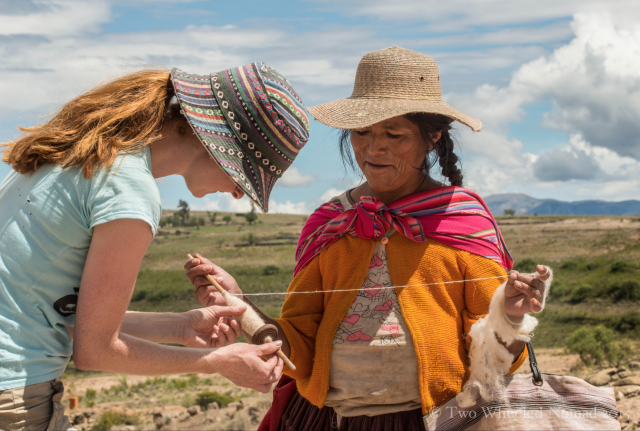 Having known of his existence for a mere few days, Oscar bit off his chortle and with a deadpan expression explained two obligatory house rules to respect. One: Treat his place like our home. Number two: Under no circumstance, must we thank him. For anything. We’d owe him many beers if we did. The flash of a serious frown clued me into his expression. “That is how it is”, he summarised, “You are bikers. End of.” He burst into hysterical laughter as if caught off guard from the brilliance of his own sense of humor. I warmed instantly to his unpretentious manner and beamed in his company.

Oscar was totally at home in his own skin and I felt at home around him like I did with few people else. He had a refreshing and familiar way about him; able to express intense compassion for people and truth with unusual clarity. With a voice continually laced with bubbly humor, he also had an abyss of adoration for his 20 year-old daughter, alongside an unwavering appetite for motorcycling. Prioritizing the repair of Jason’s chocolate wheel rim, Oscar took it to a Dakar racer’s mechanic without delay. Job done! There was nothing not to like about Oscar our host; he was the epitome of sociability, a living testament to the benevolent hospitality throughout Bolivia.

You can follow Lisa Morris’ offbeat travel tales at www.twowheelednomad.com