Riding to the end of the world, aka Ushuaia, was never our original plan. We did not ride the Dalton Highway to the tip of Alaska. Hence, the popular route from the northernmost point to the southernmost point of the Americas was something that we had already missed a crucial step in to accomplishing.

As we took off from Chicago in 2017 and found ourselves in Argentina in 2018, the end of the world was near. And not as in a doomsday event being preached to us by someone on a soapbox, but physically closer than we would ever be for potentially the rest of our lives. It dawned on us that it was either now or never, so we adjusted our plans accordingly, thanks to the advice from travelers who were making their way north as we rode south.

Our original idea was to ride as far south as we wanted to—until it got too cold or windy or if the landscape became tame and boring. But that last scenario was something we didn’t find in all of South America. I was thankful for every mile that we pushed farther south; llamas, mountains, and the bluest lakes and rivers we had ever seen greeted us around every corner. 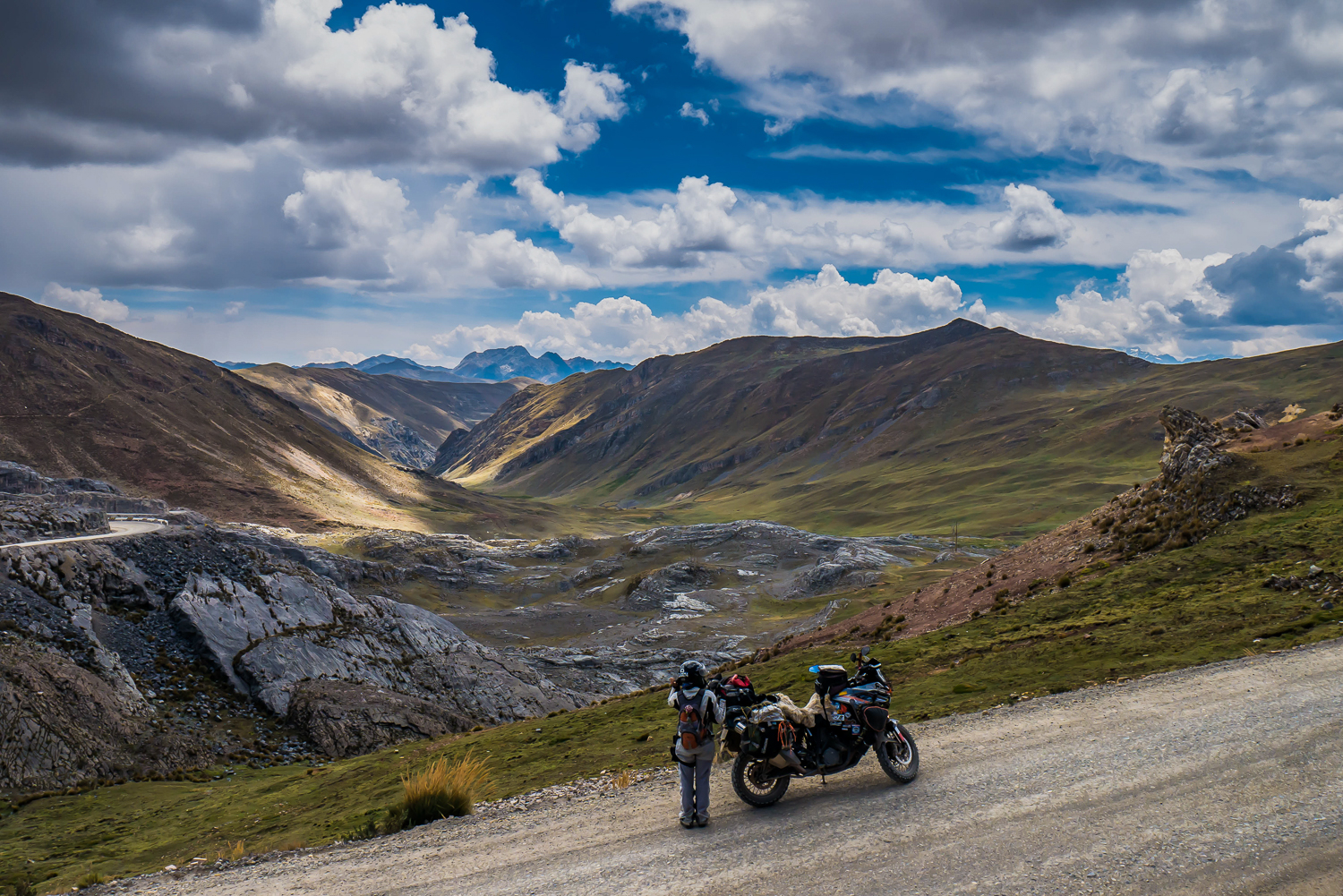 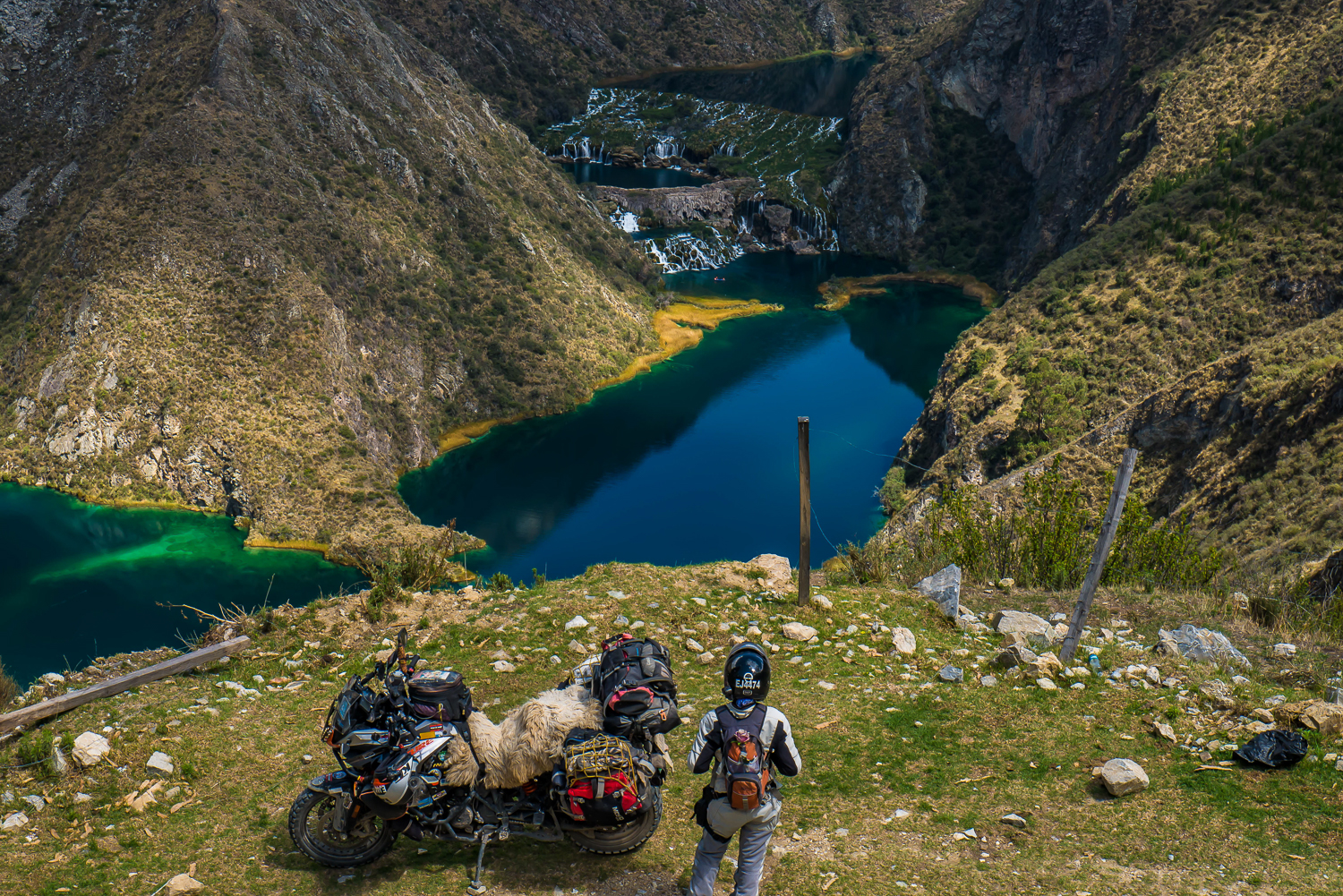 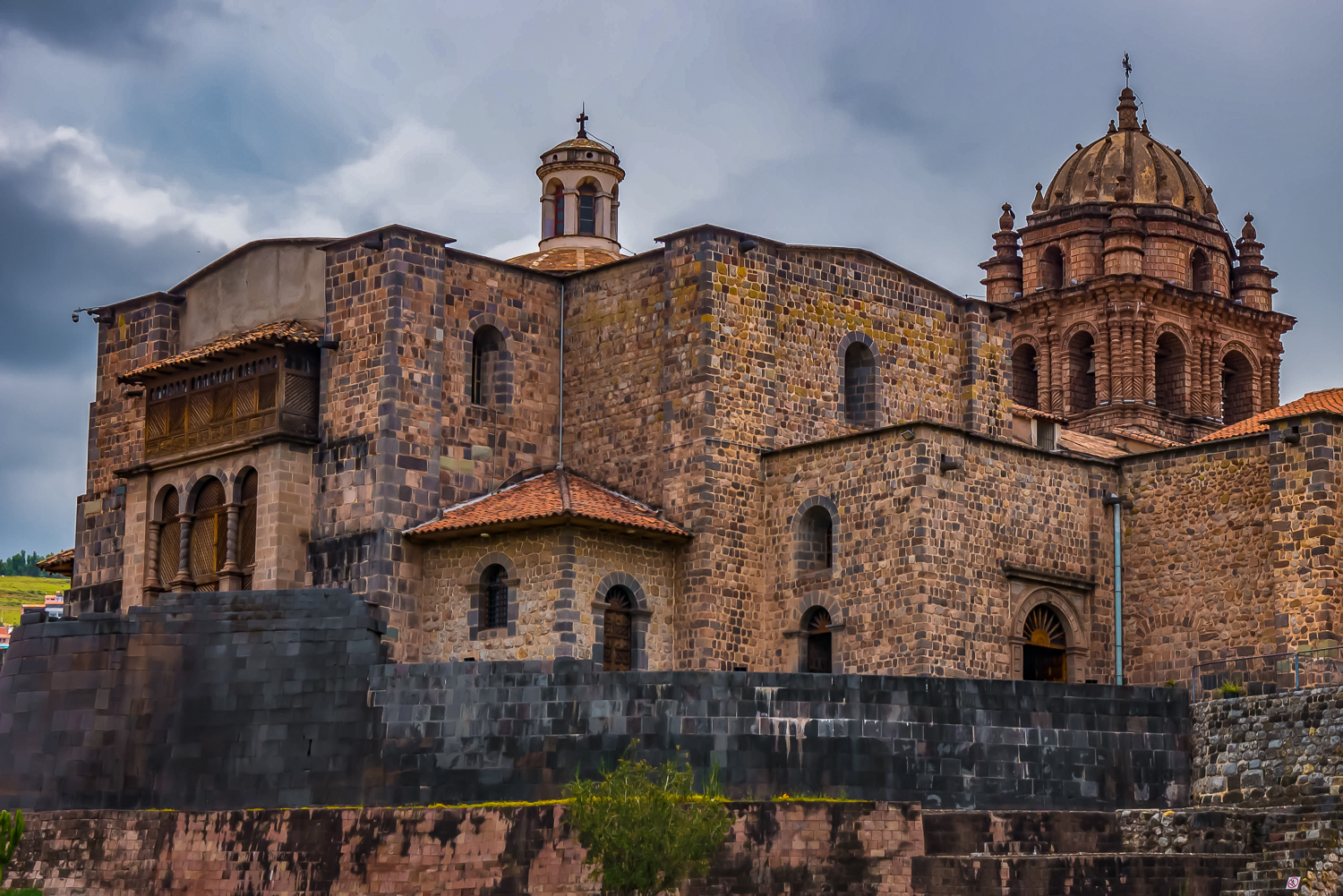 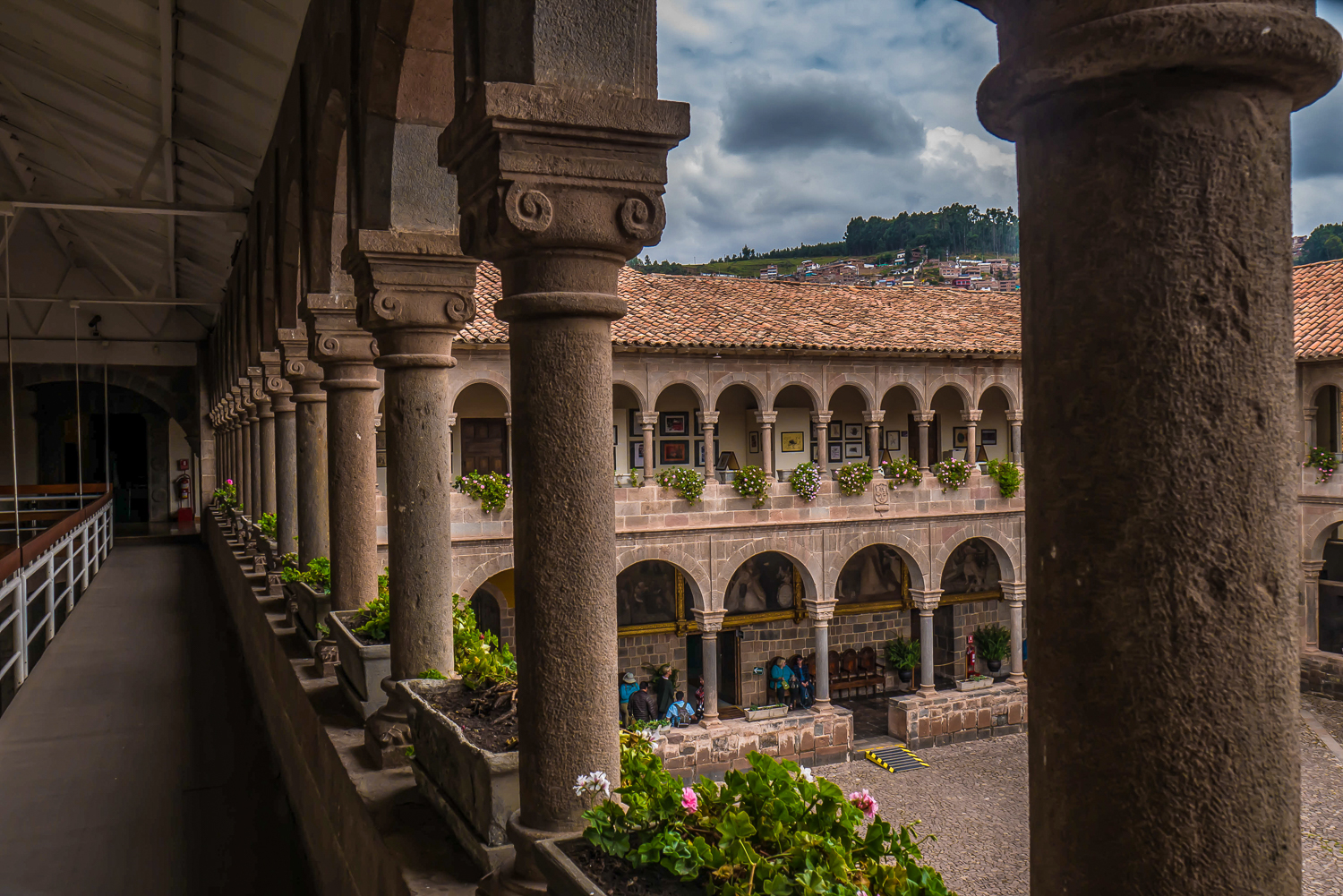 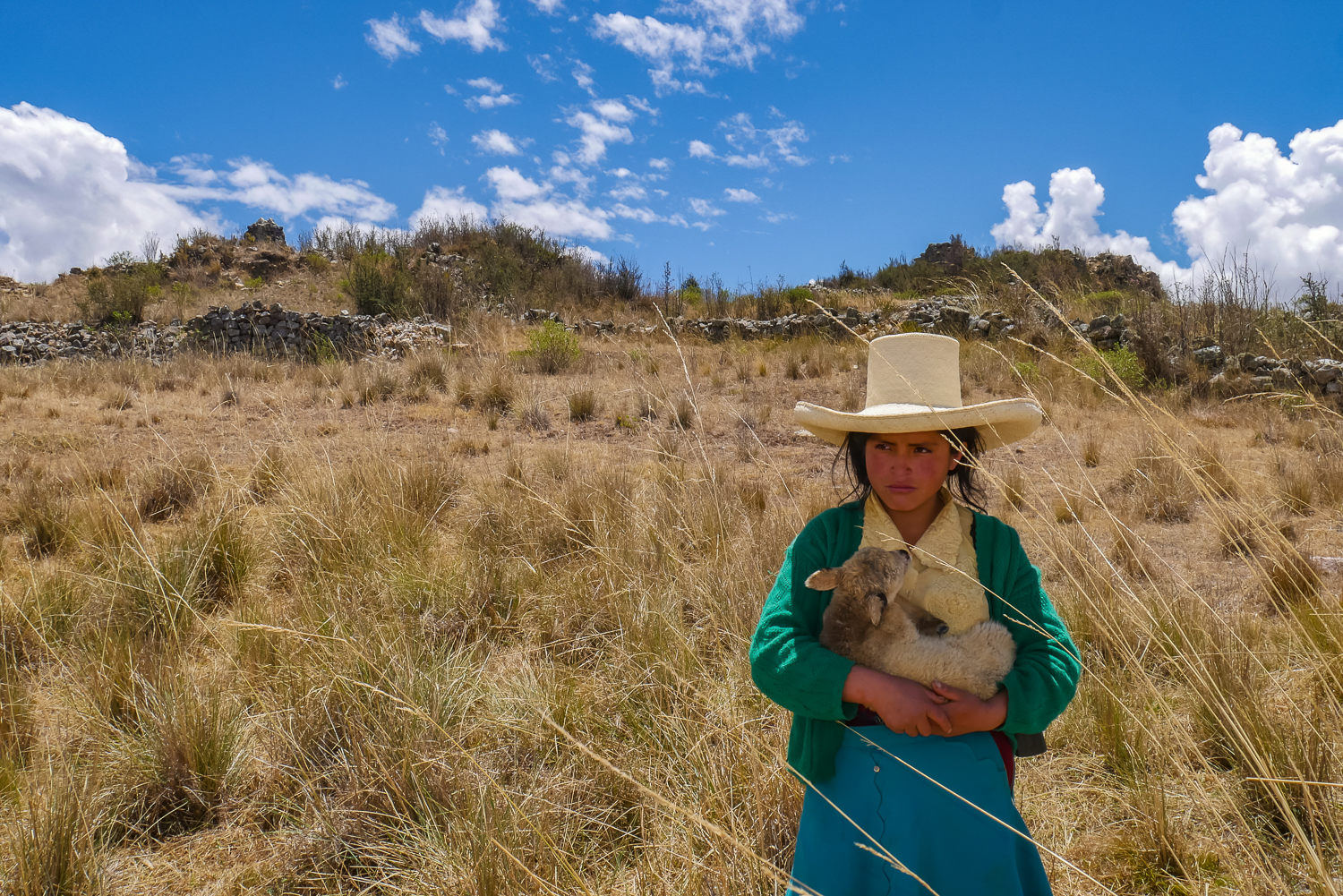 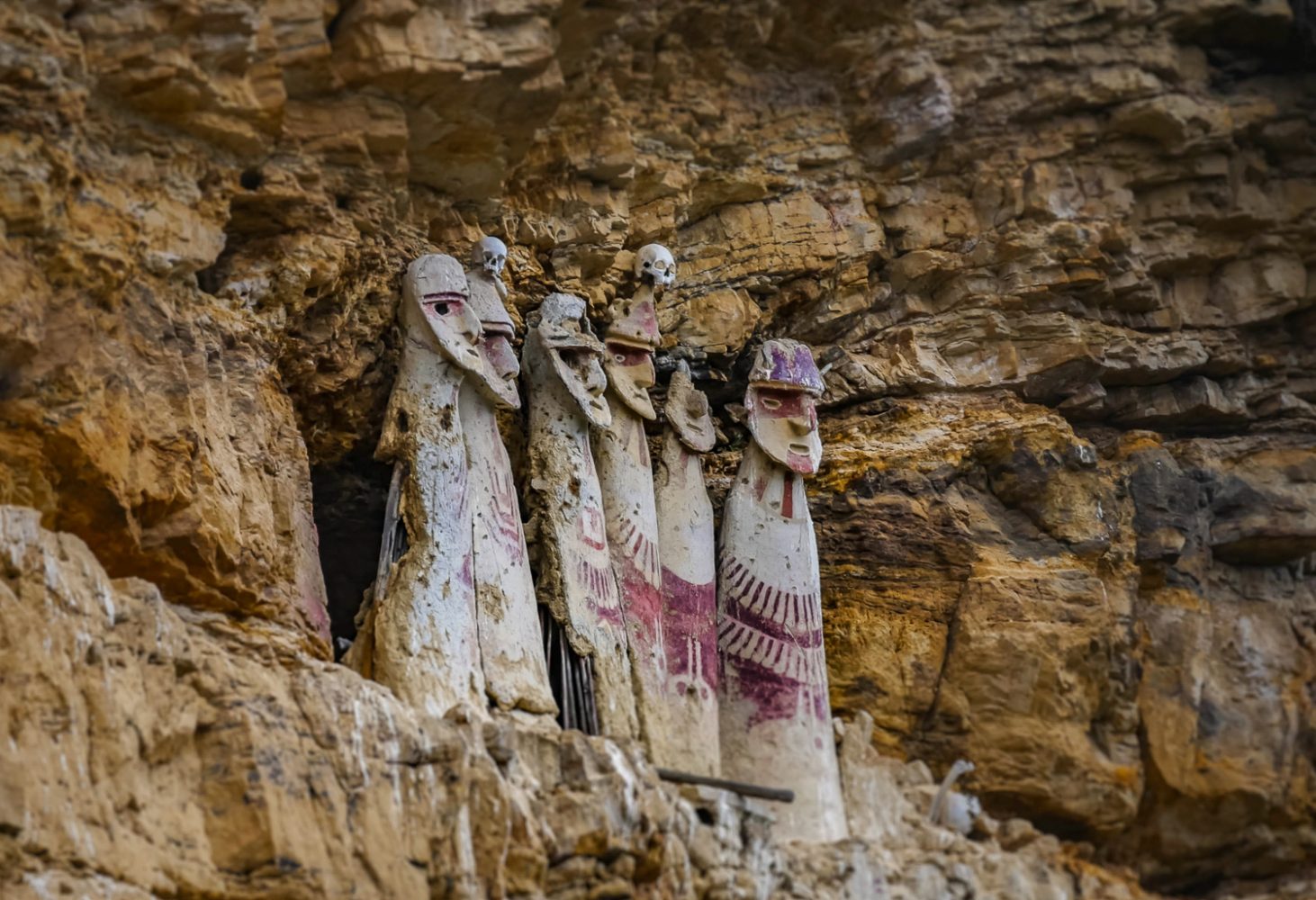 Our first “adventure motorcyclist” world wonder in Patagonia was Mount Fitz Roy. We lucked out with the weather and couldn’t have been more excited to watch those peaks grow bigger and bigger, like they were giant granite crystals shooting into the sky. It took us much longer than normal to get to the nearby village of El Chaltén simply because we kept stopping for pictures.

The road to El Chaltén was perfectly paved with white lines that disappeared off into the distance. Other travelers told us that less than a year ago, it was still a gravel road that added another element of charm to the ride, but now it was tarmac. 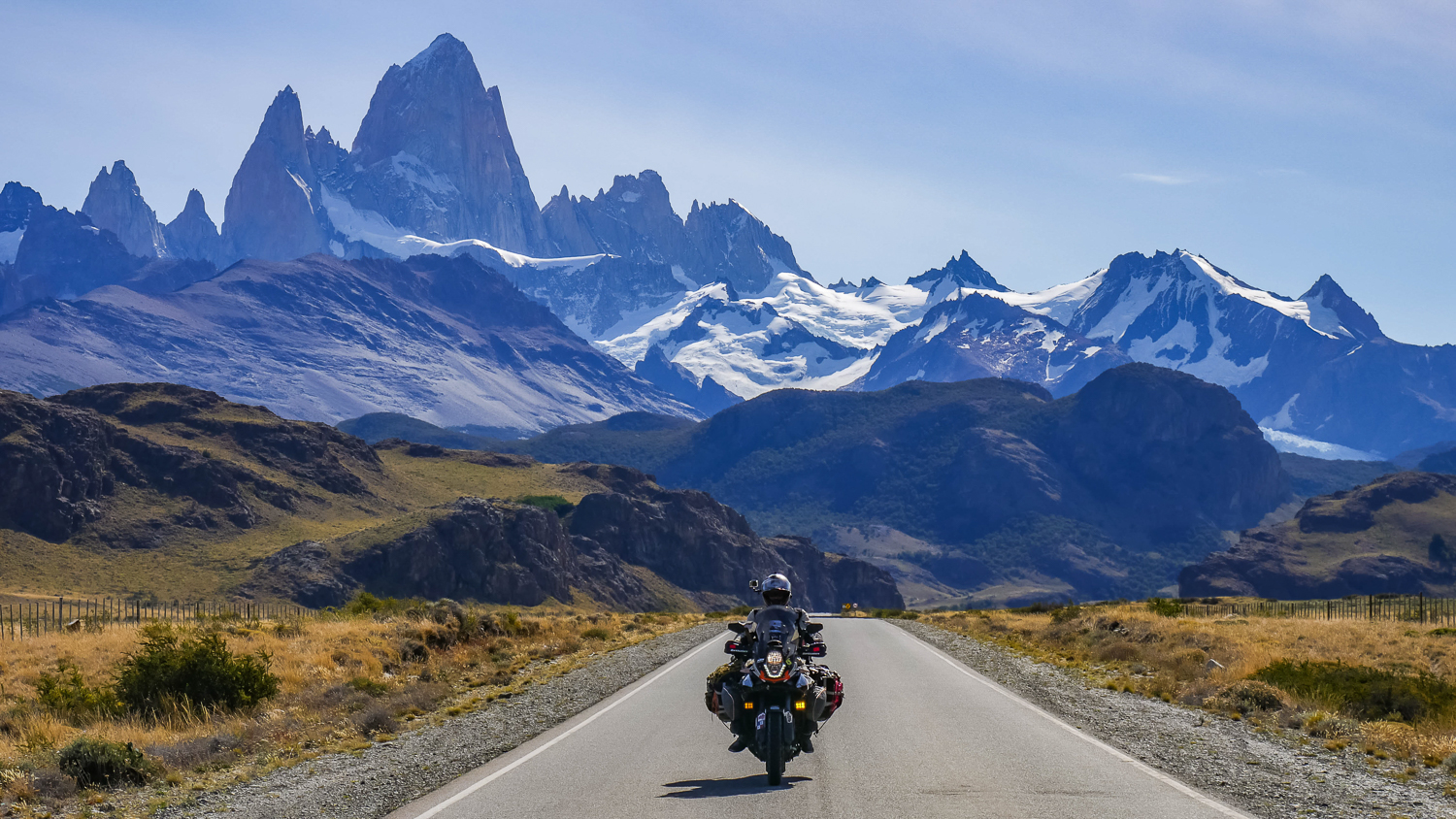 After Fitz Roy, we rode to Perito Moreno Glacier in Argentina to once again be blown away by nature’s beauty. As we stood there, marveling at the 240-foot-high wall of ice (74 meters), we could hear cracking as pieces crashed into the water below—it sounded like artillery fire. It was like watching a slow-motion battle of epic proportions between ice and water as the lake eternally consumed the never-ending charge of the flowing glacier.

We felt space and time in all its vastness as we realized that we are a mere blip in the age of the planet Earth. We are nothing compared to the amount of time it took for this glacier to form way up in the mountain and then slowly flow down to the lake, only to finally crumble into it. Marisa and I felt small, insignificant, and at the same time, so appreciative to be able to witness it all. 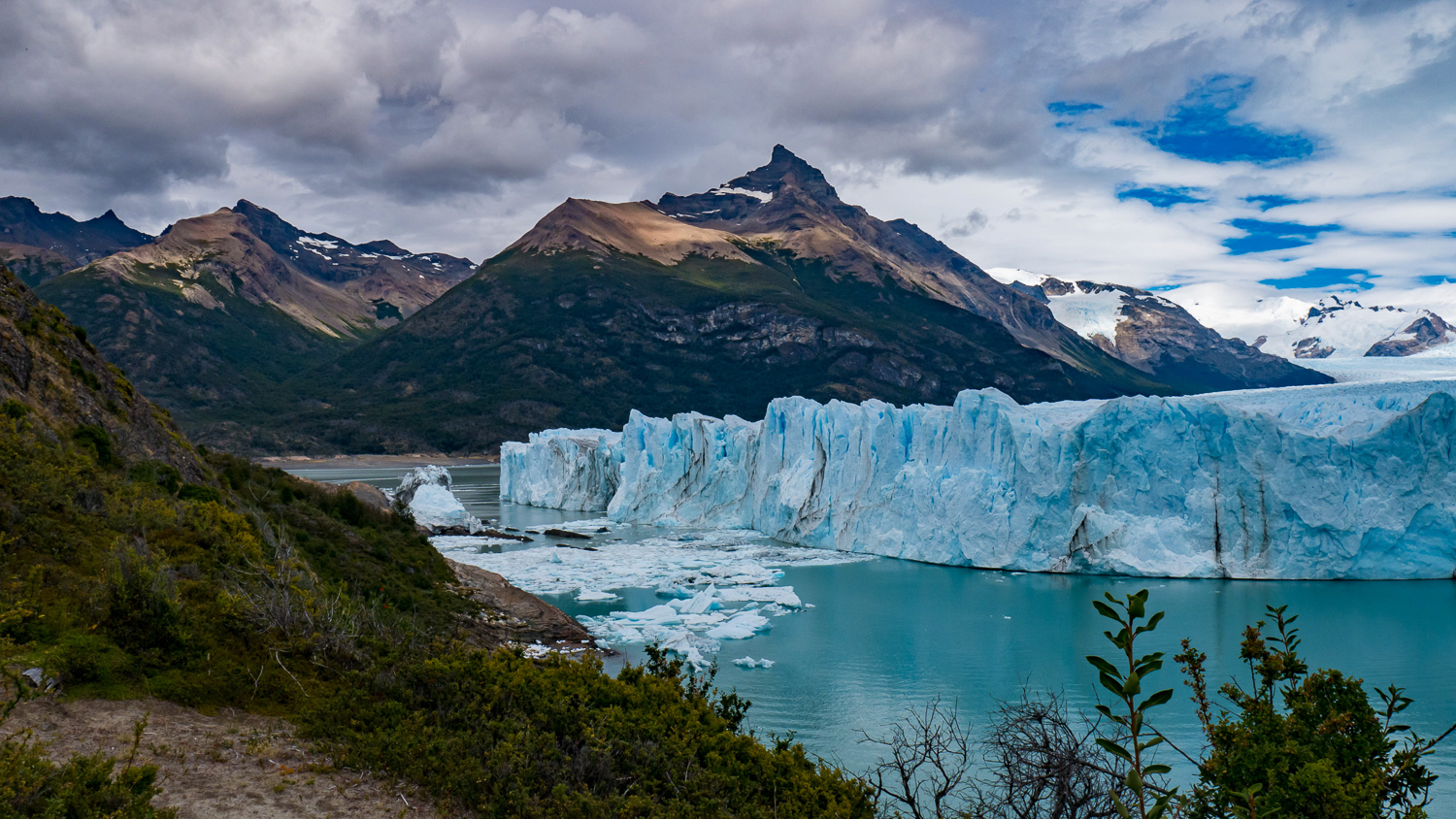 We then rode through Torres del Paine National Parkto complete the hat trick of central Argentina’s astonishments. For the entire week prior, there had been only clouds and rain in the park, but as we wound our way along the dirt road that snaked its way through the scenery, we were greeted with beaming sunshine and breathtaking views.

We pulled over to snap some shots of the secluded landscape. The breeze quieted, and ducks in the pond were quacking as we turned to each other, and both stated at the same time, This is what it is all about. 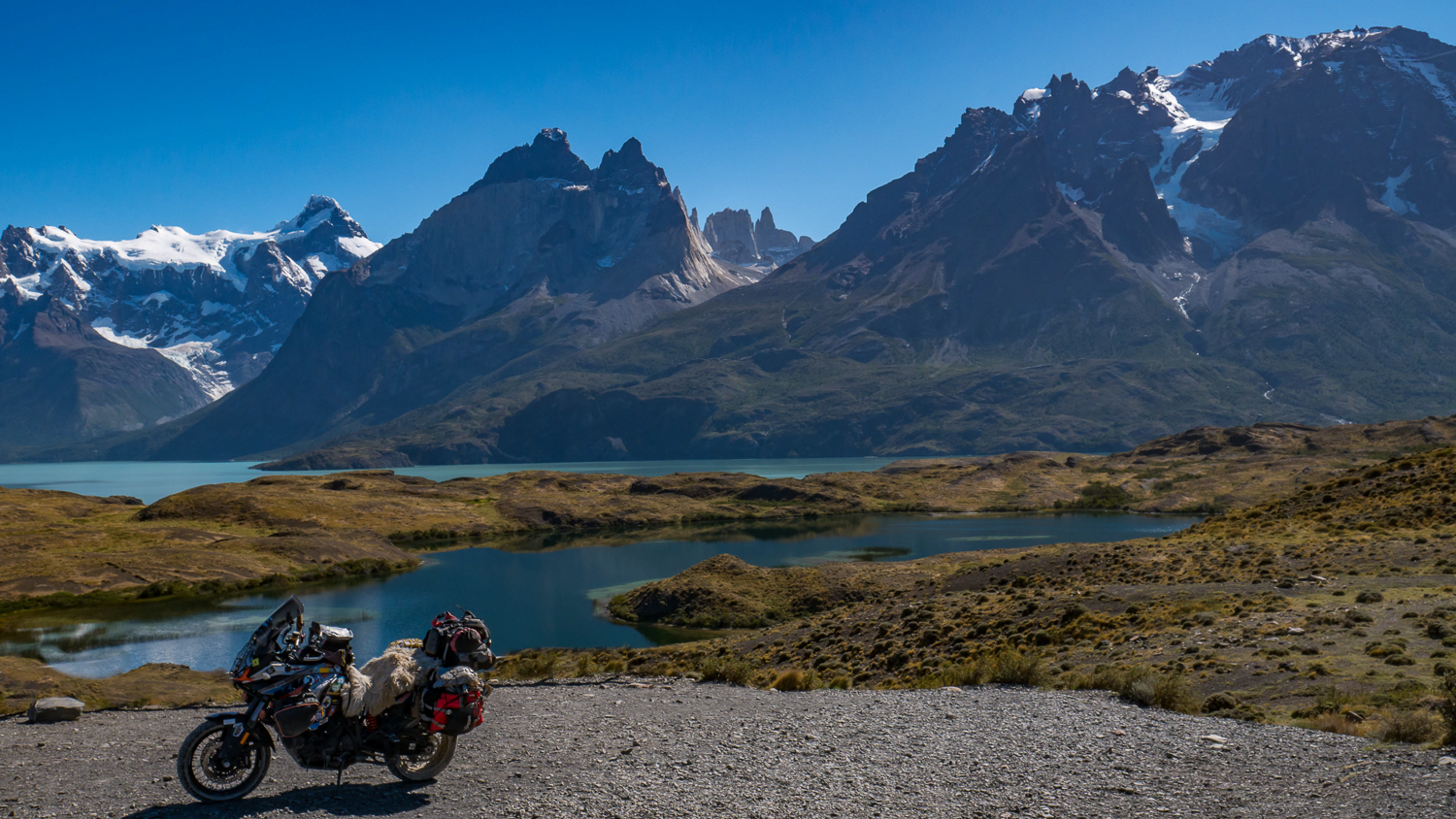 As we continued south, we hit one of the factors that concerned us most about riding that far south into Argentina, or should I say it hit us: the wind. The gale forces that slammed us head-on and from side to side were something that many fellow riders had warned us about. But it is something that you can never fully understand until you are being knocked around in it like a cat toy. It felt like the bike was an enormous magnet, constantly being pulled to one side at a 45-degree angle, and every once in a while, the magnetic poles would flip 180 degrees causing the bike to lunge in the opposite direction.

Passing large semi-trucks was a nightmare. The wind would be so strong prior to overtaking them and then completely die from being blocked by the truck. The loud rushing of wind in our helmets would be replaced by complete silence, the bike would return to center, and it almost felt like we were riding in slow motion through a void of space. Then, once past the cab, and boom, the wind would knock you right back on your derriere, and you’d have to reclaim your balance from the onslaught. I felt like the pilot of a space shuttle that was reentering the atmosphere. Violent convulsions shook the bike back and forth as we pressed forward in the pursuit of Ushuaia. 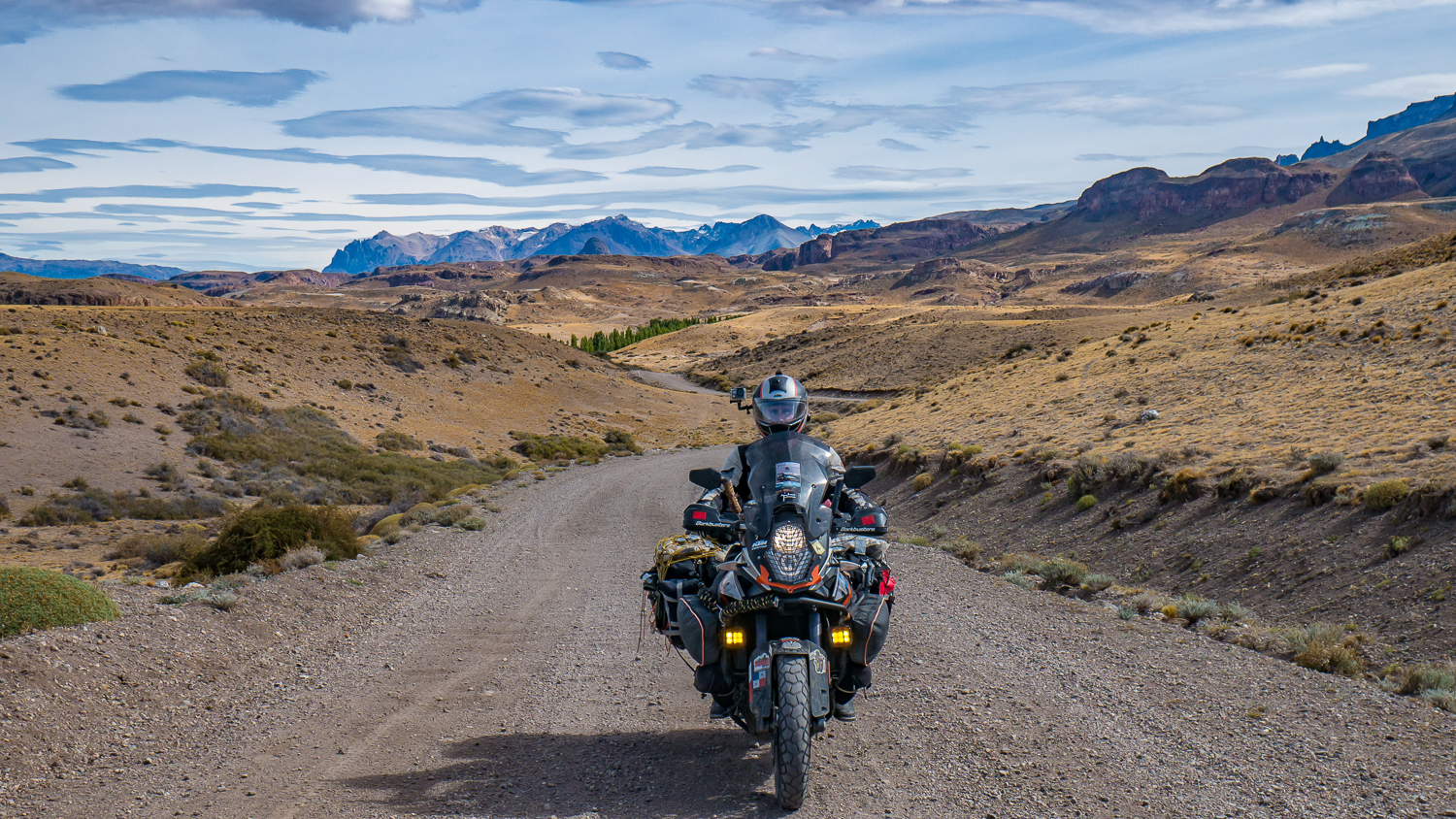 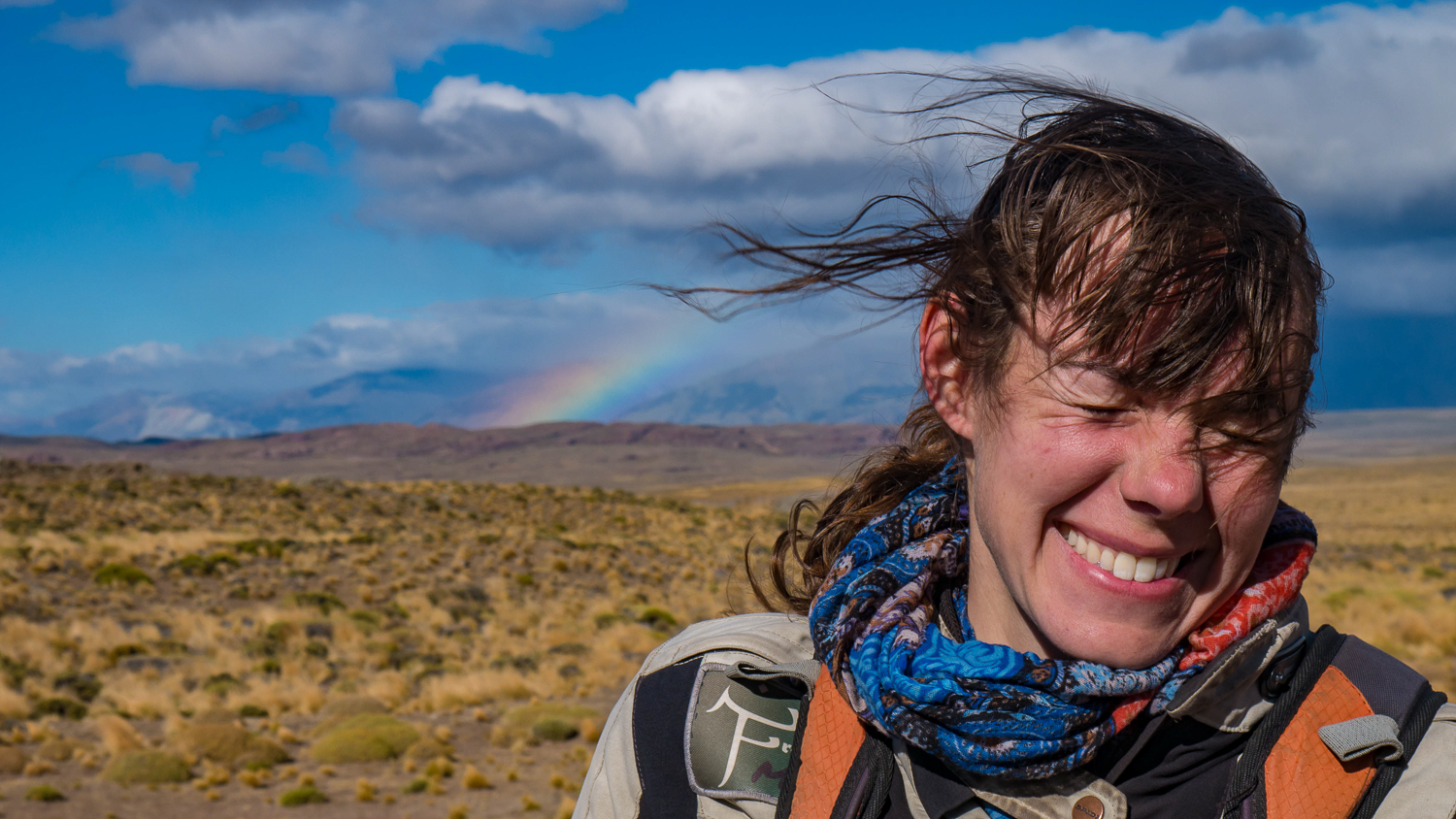 Signs that read Peligroso: Baches appeared, and though I knew that peligroso meant danger, I thought to myself, what are baches? Then, ahead of us, the road looked like it had been attacked by mortar fire. As huge potholes appeared in the road, I realized that those must be baches—more like trip enders. We were in a lousy accumulation of circumstances; we cautiously rode down the road fighting the wind at such a steep angle that the orientation of the maps on my phone switched from horizontal to vertical. My tire pressure monitors had malfunctioned long ago, so I was hoping that the front tire was holding air as I avoided the holes in the road that could potentially swallow us whole.

The list of mechanical problems was starting to grow to an unbearable point. I had a newly acquired oil leak from my clutch slave, and the chain guard had been completely eroded away, causing the chain to eat into my swingarm. Bubbles were appearing in my front tire and cracks in the rear. It seemed that every mile closer to the end of the world, the bike sprouted another problem like a failing Dutch dam. Hearing the chain continuously slap against the aluminum swingarm made me grit my teeth every time I heard it clank.

In an effort to keep the chain from sawing the swingarm in half, I severed the plastic guard into two pieces and turned it around so that it could provide some kind of protection. Of course, the bolt patterns for the guard no longer aligned, so I broke out our bag of zip-ties and created an entanglement of white zip-ties that were all strung together to hold it in place without getting caught in the front sprocket. The outcome looked like what would happen if Spiderman sneezed while shooting his web.

It definitely did not look like original KTM equipment, and it was a poor effort all around, but it made me feel a little better that I at least tried to do something. All it did was provide false hope, something I have learned to rely on.

“It’s all going to be fine, love,” Marisa tried to comfort me. “It always works out.”

It was true that every problem we had encountered along our world trip so far had been resolved with a little (sometimes a lot) of time and money. But I still had some issues dealing with things in the moment. My frustration usually gets the better of me, and I just swear and moan as I use zip-ties, duct tape, or JB Weld to MacGyver the latest round of repairs.

After yet another ferry, we continued farther south onto the island Tierra del Fuego. We found ourselves gliding through the snow-sprinkled mountain pass of Garibaldi on our way to Ushuaia. It had snowed the day before, but the pass was clear and dry for us as our luck was beginning to turn for the positive. That ride was simply stunning as we were surrounded by jagged peaks with deep green pine forests dusted in snow. Since leaving Chile’s Carretera Austral (highway), that was the first time that we’d seen beautiful mountains. It had been many days of riding through nothing but dry grasslands and sparse trees that bent over as they strained against the Argentinian wind.

But Garibaldi Pass felt like a whole other world as we made our way along the paved road that hugged the mountainsides with vistas of lakes and valleys all around. It was a grand entrance to Ushuaia. We had finally made it. Through bliss and awe, frustrations and hardships, we made it to the sign that proudly proclaimed: Fin del Mundo, End of the World. 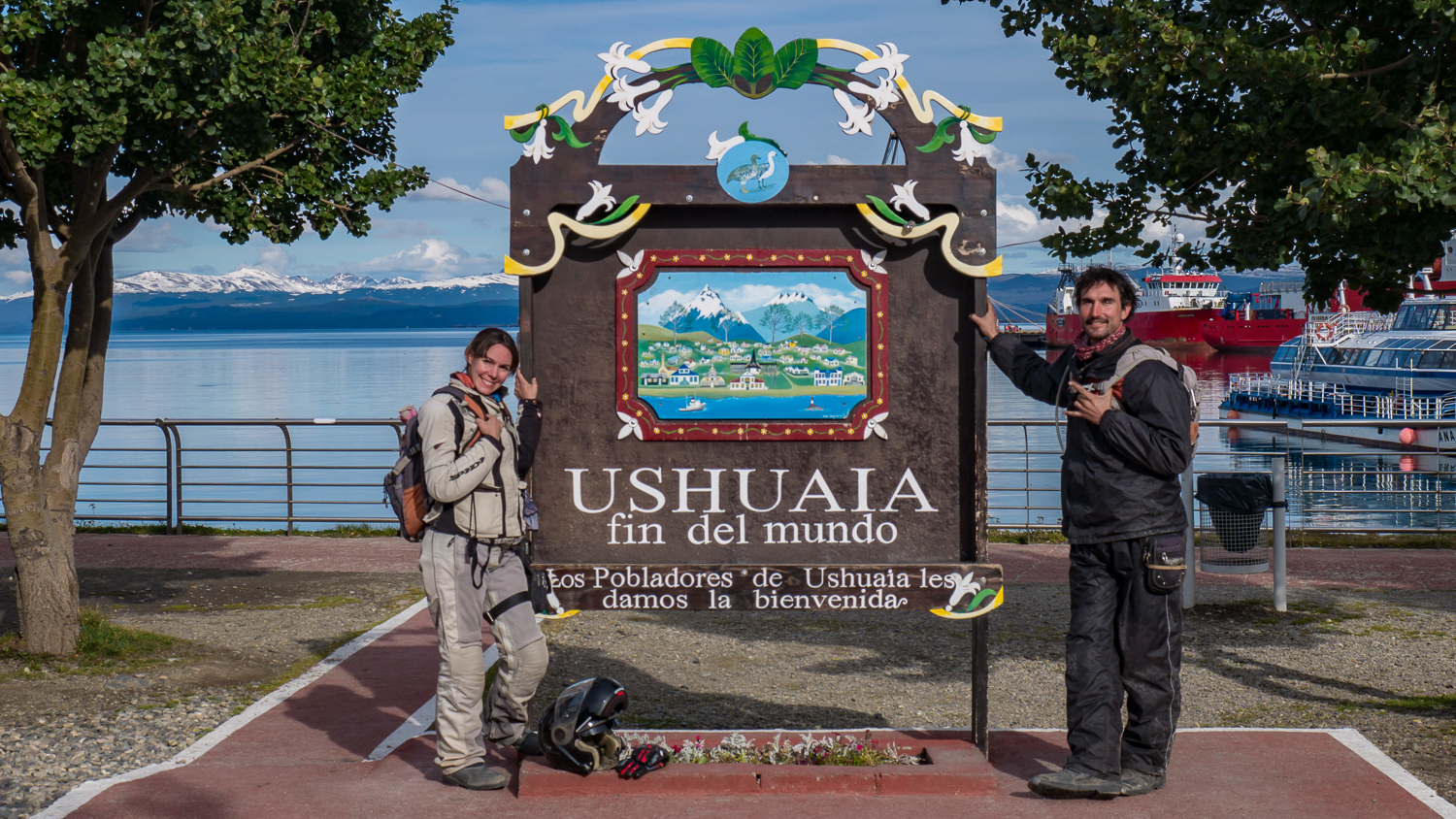 In the parking lot of Ushuaia’s port, my chain guard was hanging off like a dead limb, oil was seeping out from multiple leaks of the engine, and both of my tires looked like they could fail at any second.

Was it worth the struggle? The answer is undoubtedly, one-hundred percent yes. All of the annoyances were far outweighed by the journey through a dazzling landscape of wonder and beauty. 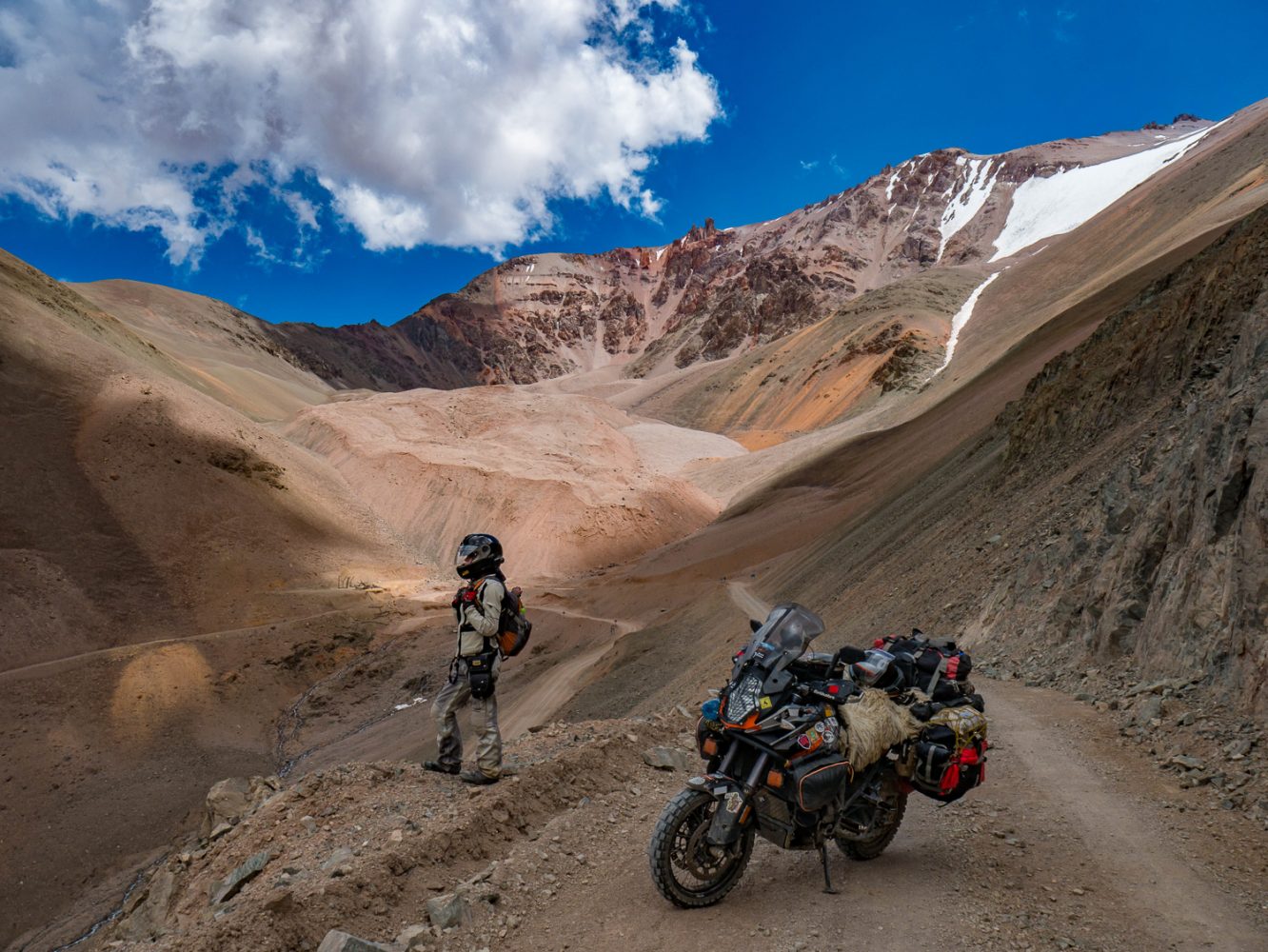 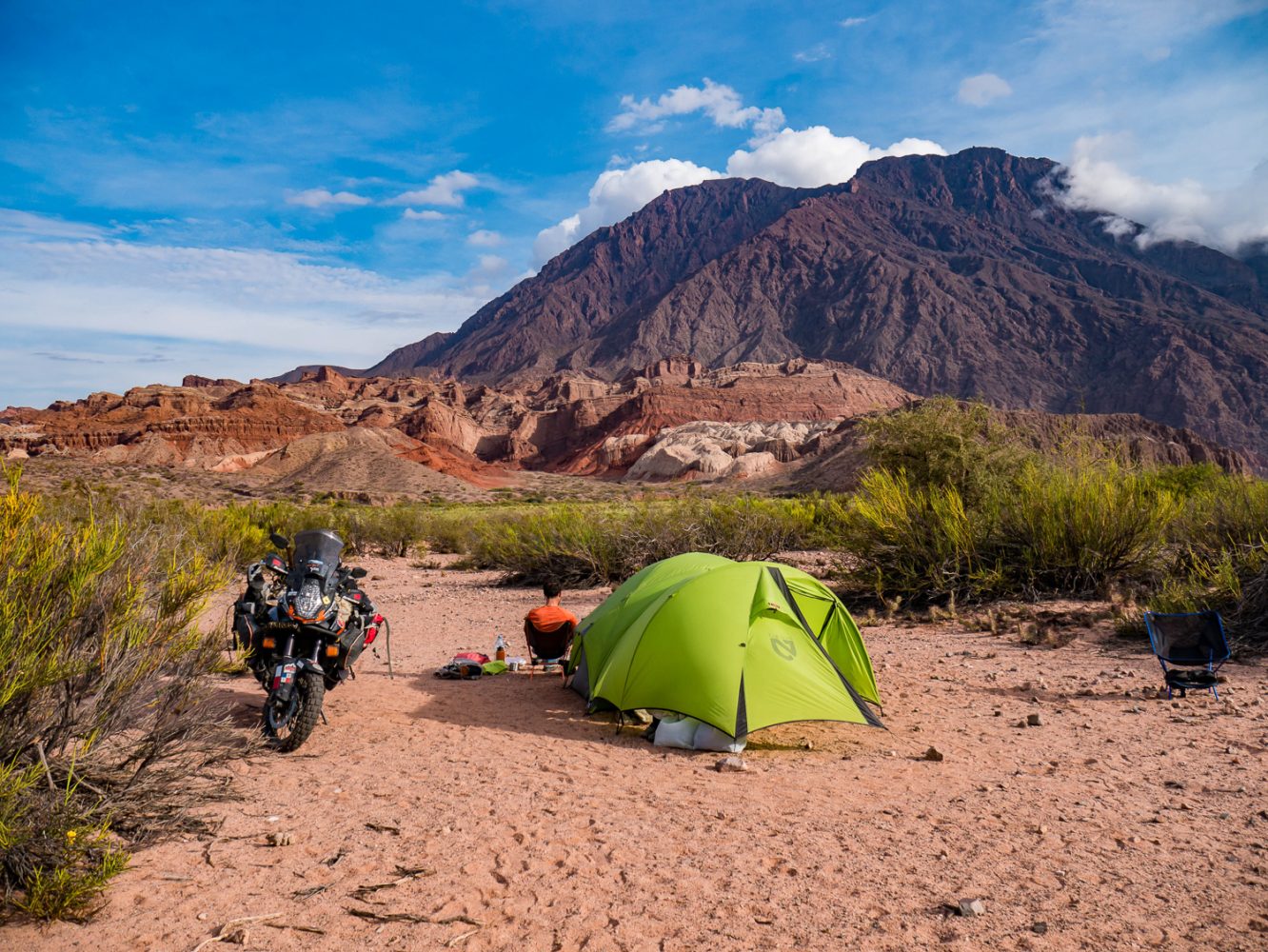 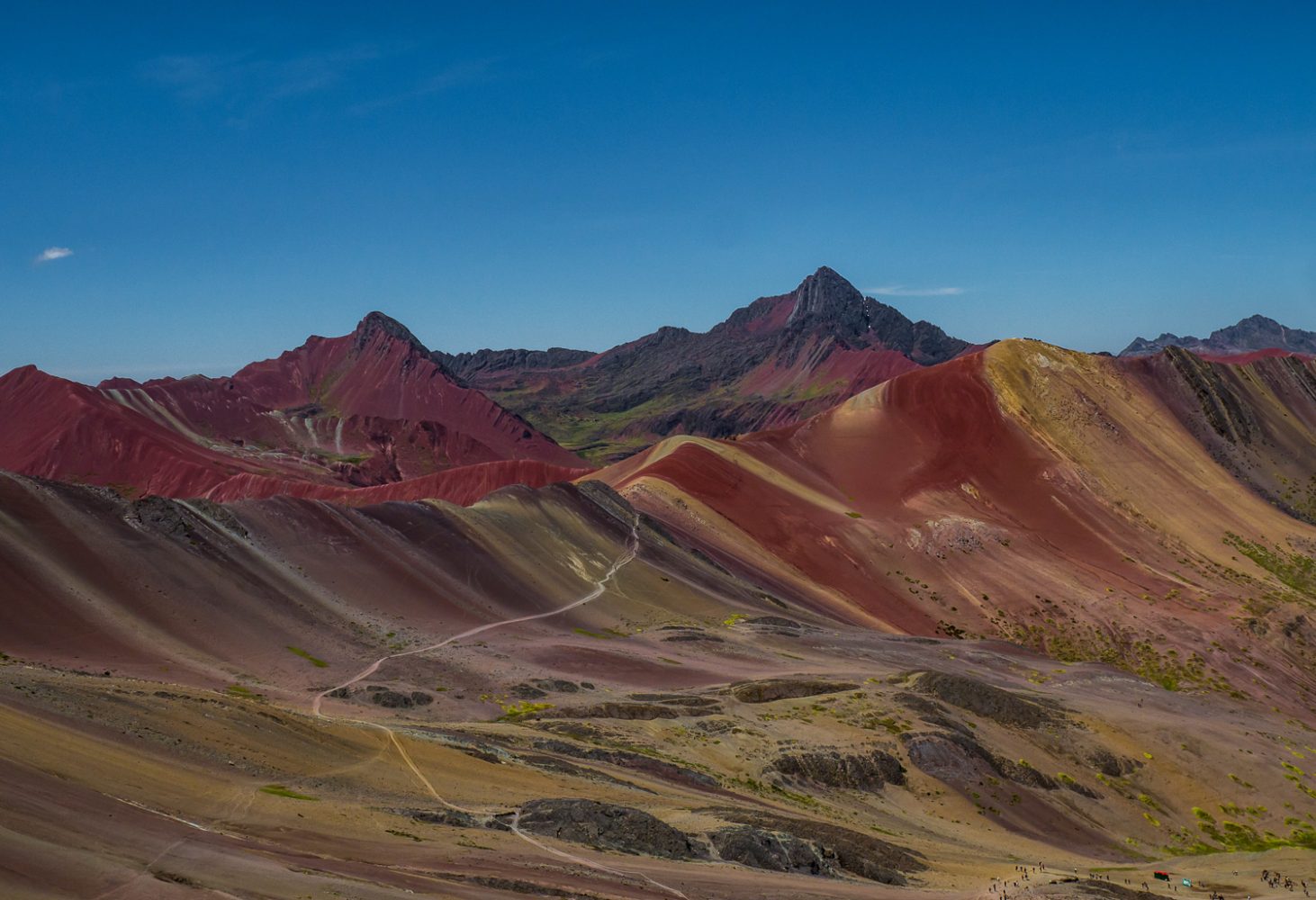 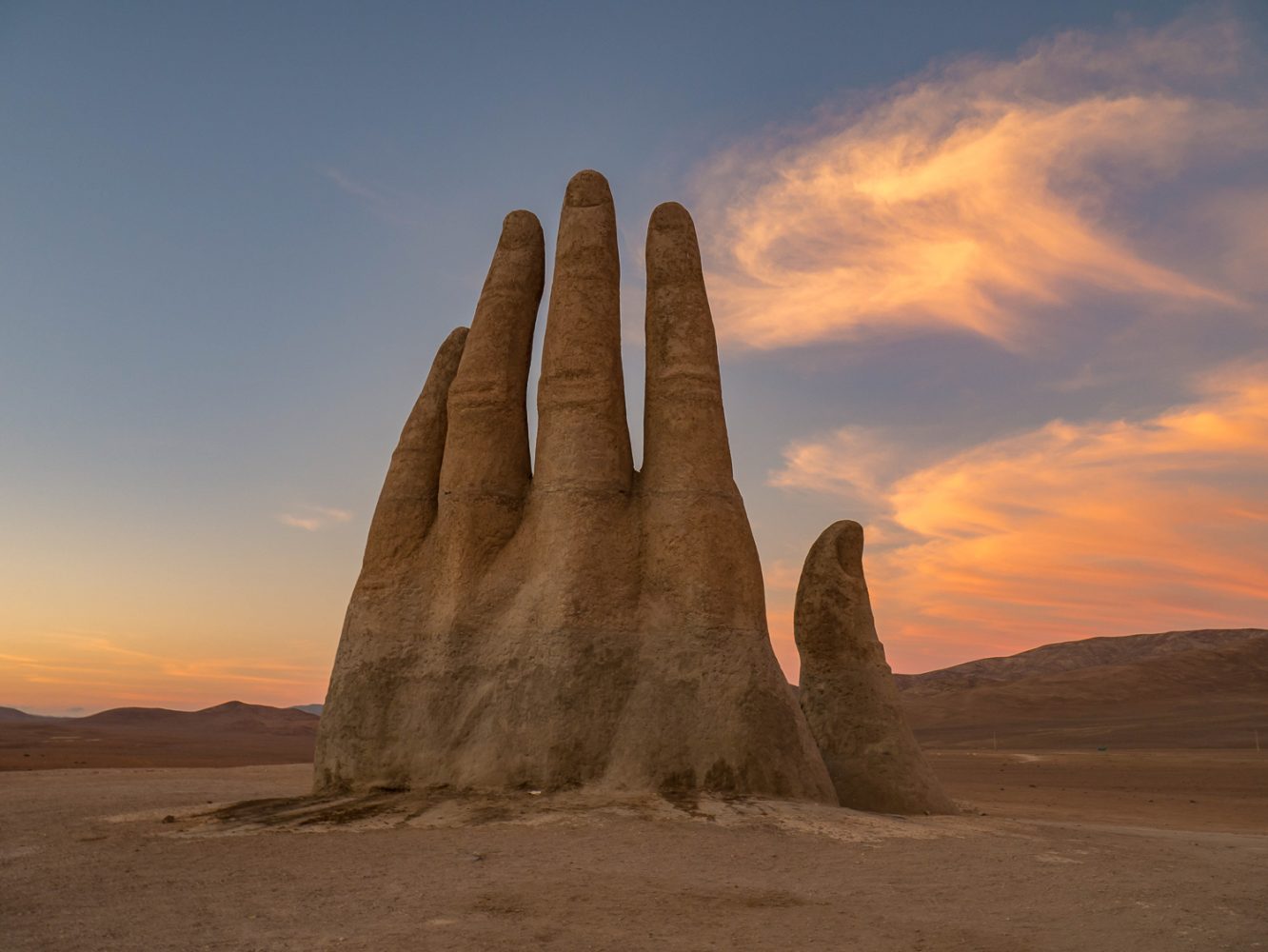 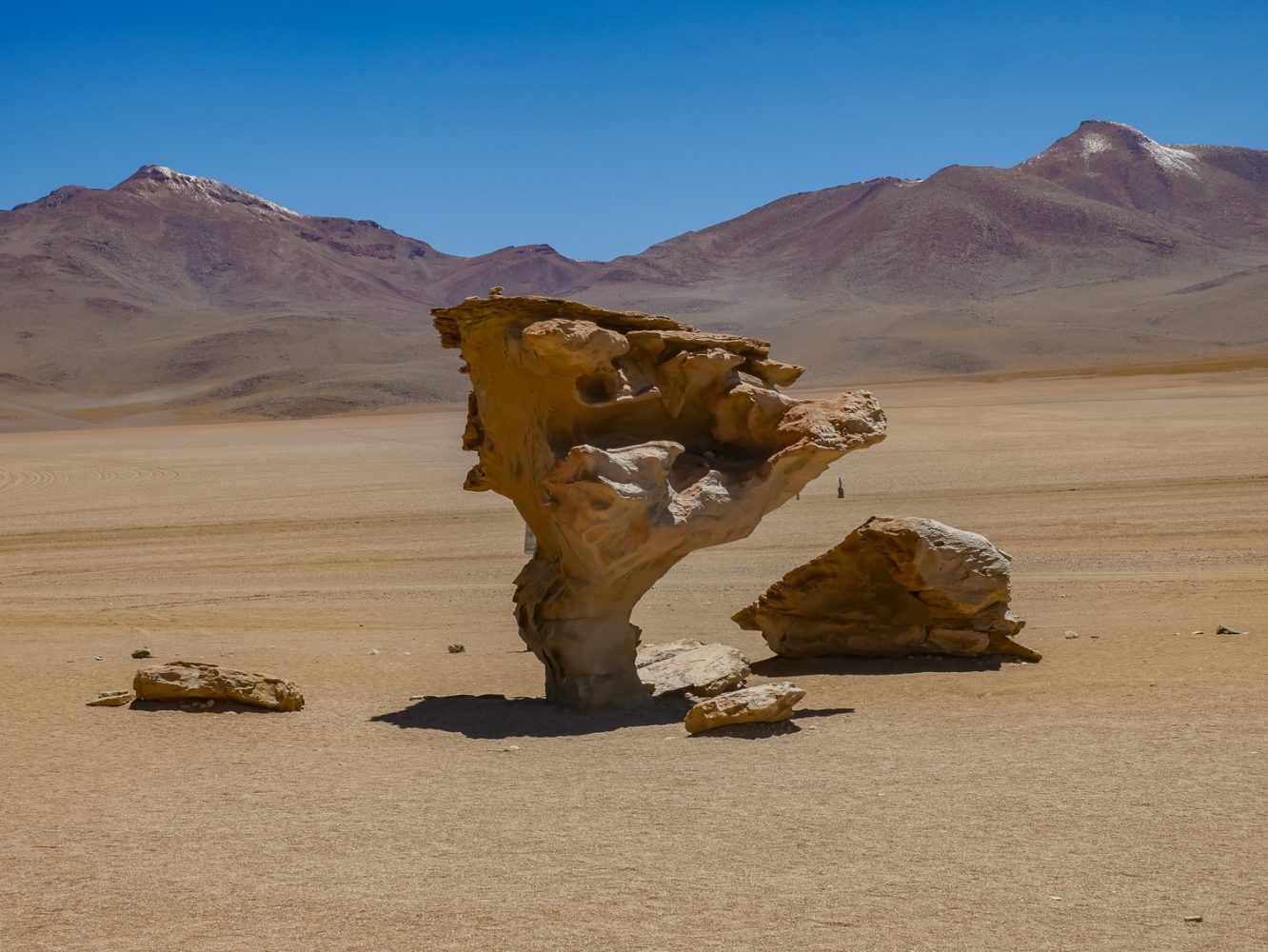 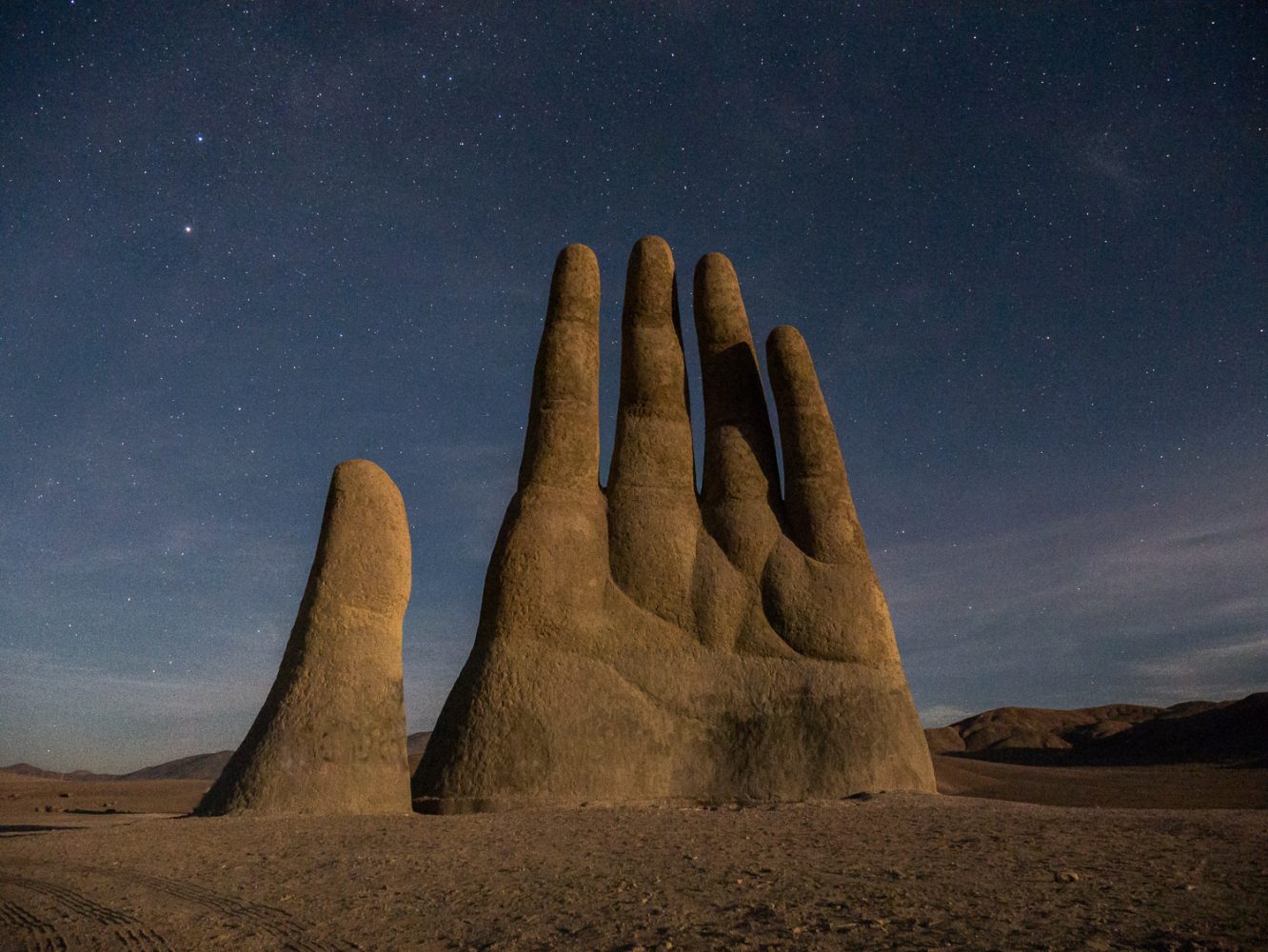 Born and raised just west of Chicago, Illinois, Tim spent the first 32 years of his life rarely exploring more than an hour away from the hospital he was born in. But now, things have changed. He traded his behind-the-desk job for a behind-the-handlebars adventure after his wife surprisingly agreed to explore the planet together. It was unclear at the time if they had made the best or worst decision of their lives. But, after spending two years in the Americas, from Chicago to Ushuaia, they can confirm it was the wisest choice they could have made, and it was only the beginning. Tim is the author of a series of ADV motorcycle books, writing about the couple’s meanderings around the world.